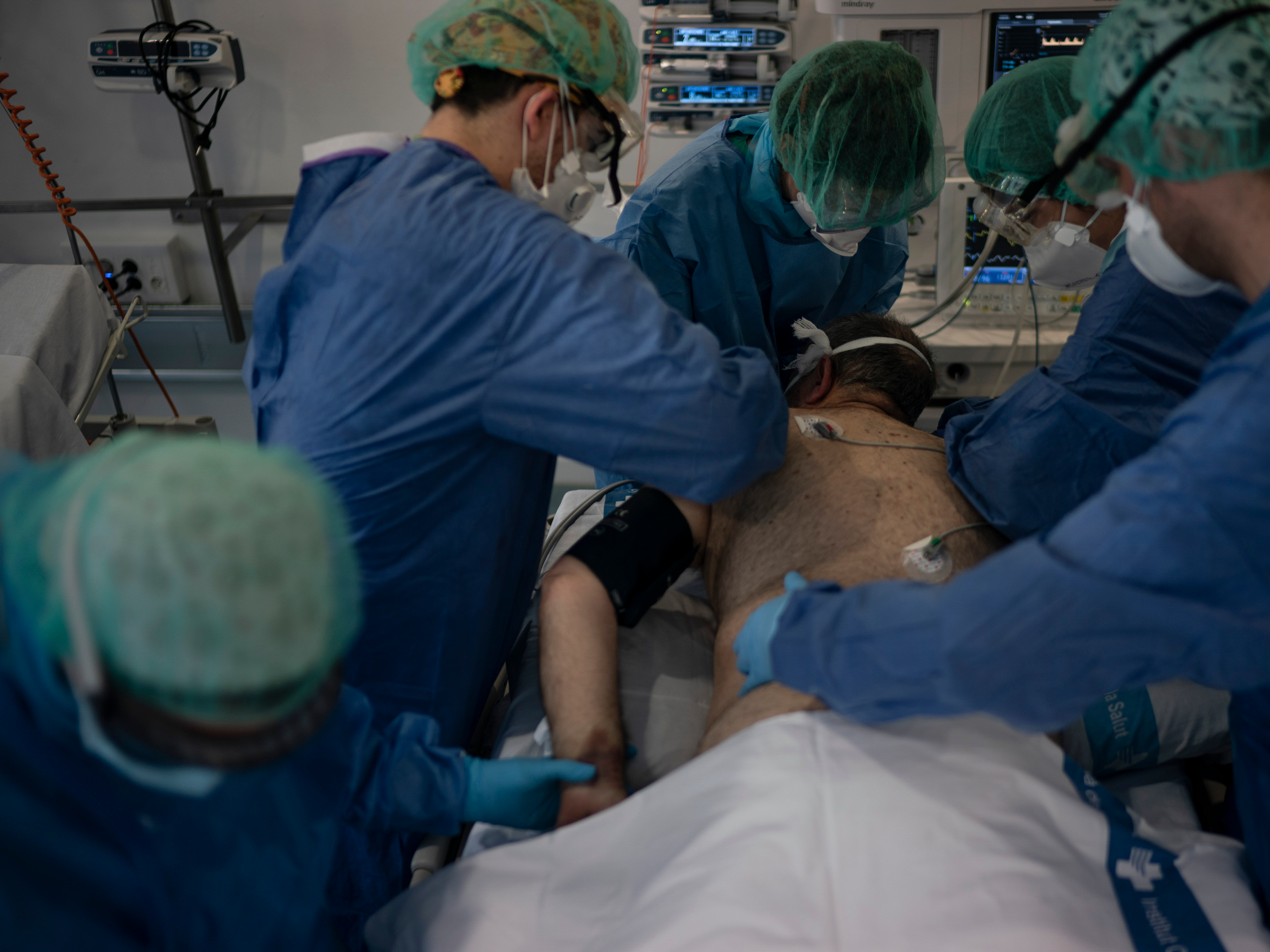 AP Photo/Felipe DanaHealthcare workers assist a COVID-19 patient as they lay on their stomach at a library that was turned into an intensive-care unit in Badalona, Barcelona province, Spain, April 1, 2020.

The US’s coronavirus curve seems to have plateaued. But the number of deaths is unlikely to drop as soon as spread is in decline.

The country’s number of new daily coronavirus cases hit a peak on April 24 with more than 38,000 Americans testing positive for the virus. On Friday, more than 29,000 new cases were reported.

But experts warn that a drop in the amount of new daily infections does not necessarily lead to an immediate drop in the number of daily deaths, since it takes weeks for people diagnosed with COVID-19 to exhibit severe symptoms.

Once a person is infected, the virus lingers for a long time.

“COVID-19 is a rather slow disease, Benjamin Neuman, chair of biological sciences at Texas A&M University-Texarkana, told Business Insider. “It takes two to three weeks after infection for a person to be in critical condition or to die, so death curves generally follow along behind infection curves, something like one to two weeks delayed.”

Why the lag in numbers?

The trend Neuman describes was clear in South Korea, which became the second-most infected country after China in early March. Even as new coronavirus cases were starting to flatten, South Korea witnessed a spike in its number of daily deaths. On March 3, the country reported 851 daily new cases – its highest in a single day – and four deaths. But South Korea’s highest daily death toll was recorded roughly three weeks later, on March 24, when nine people died of COVID-19 in the country.

A similar process has happened in New York. In early April, Gov. Andrew Cuomo reported that the state was flattening its curve. That has proven true, but a month later, the state continues to record a drop in the number of new daily cases while reporting a substantial number of deaths each day.

During a press conference on May 3, Cuomo said the death toll has remained “obnoxiously and terrifyingly high.”

“It’s going to seem as though things are getting better and worse at the same time, which is going to be confusing for a lot of people,” Neuman said, adding, “case numbers lag about a week behind reality.”

This death-rate trend could change, however, as new treatments are developed and doctors and researchers continue to learn more about the disease. Earlier this month, the US Food and Drug Administration earlier this month issued an emergency use authorization for the antiviral drug remdesivir.

Siddappa Byrareddy, an associate professor at Nebraska Medical Centre, said the medical community also knows more now about the coronavirus attacks the body than they did a couple moths ago.

“By providing early treatment, we are able to slow the progression of the disease in the body,” he said.