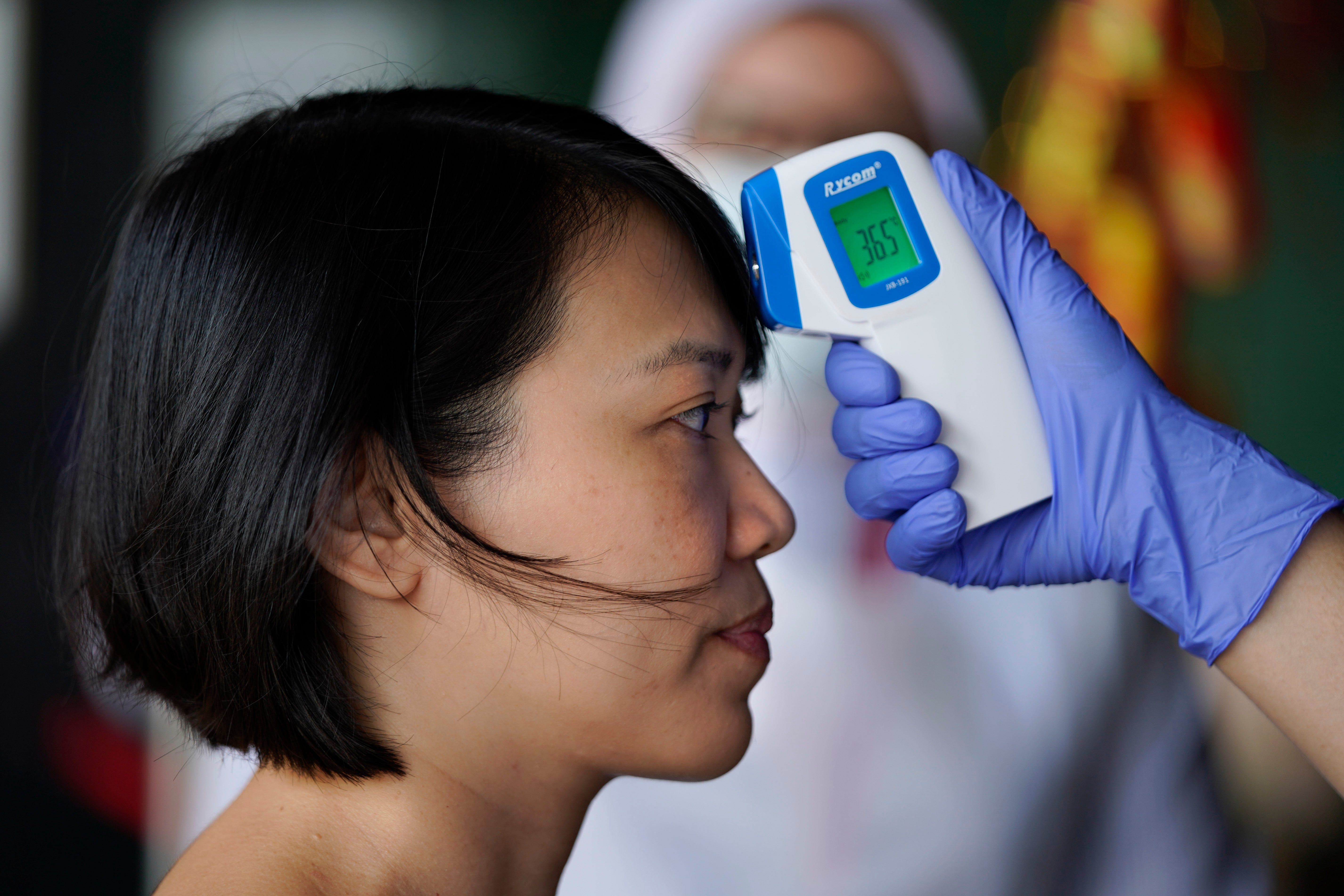 As doctors observe a growing number of coronavirus patients, they have identified a few patterns in how typical symptoms progress.

As many as 40% of coronavirus cases are asymptomatic, according to the Centres for Disease Control and Prevention. And only 20% of symptomatic cases become severe or critical.

Among patients who develop symptoms, a fever and cough are usually the first to arrive. They’re often followed by a sore throat, headache, muscle aches and pains, nausea, or diarrhoea (though in severe cases, gastrointestinal issues can appear earlier in the course of an infection). Patients with severe infections tend to develop difficulty breathing â€” one of the virus’ hallmark symptoms â€” around five days after symptoms start.

But symptoms generally don’t appear right after a person has been infected. The virus’ median incubation period is about four to five days, according to the Centres for Disease Control and Prevention. During that time, an infected person likely won’t yet know they’re sick, but evidence shows they could transmit the virus during the presymptomatic phase.

After observing thousands of patients during China’s outbreak earlier this year, hospitals there identified a pattern of symptoms among COVID-19 patients: 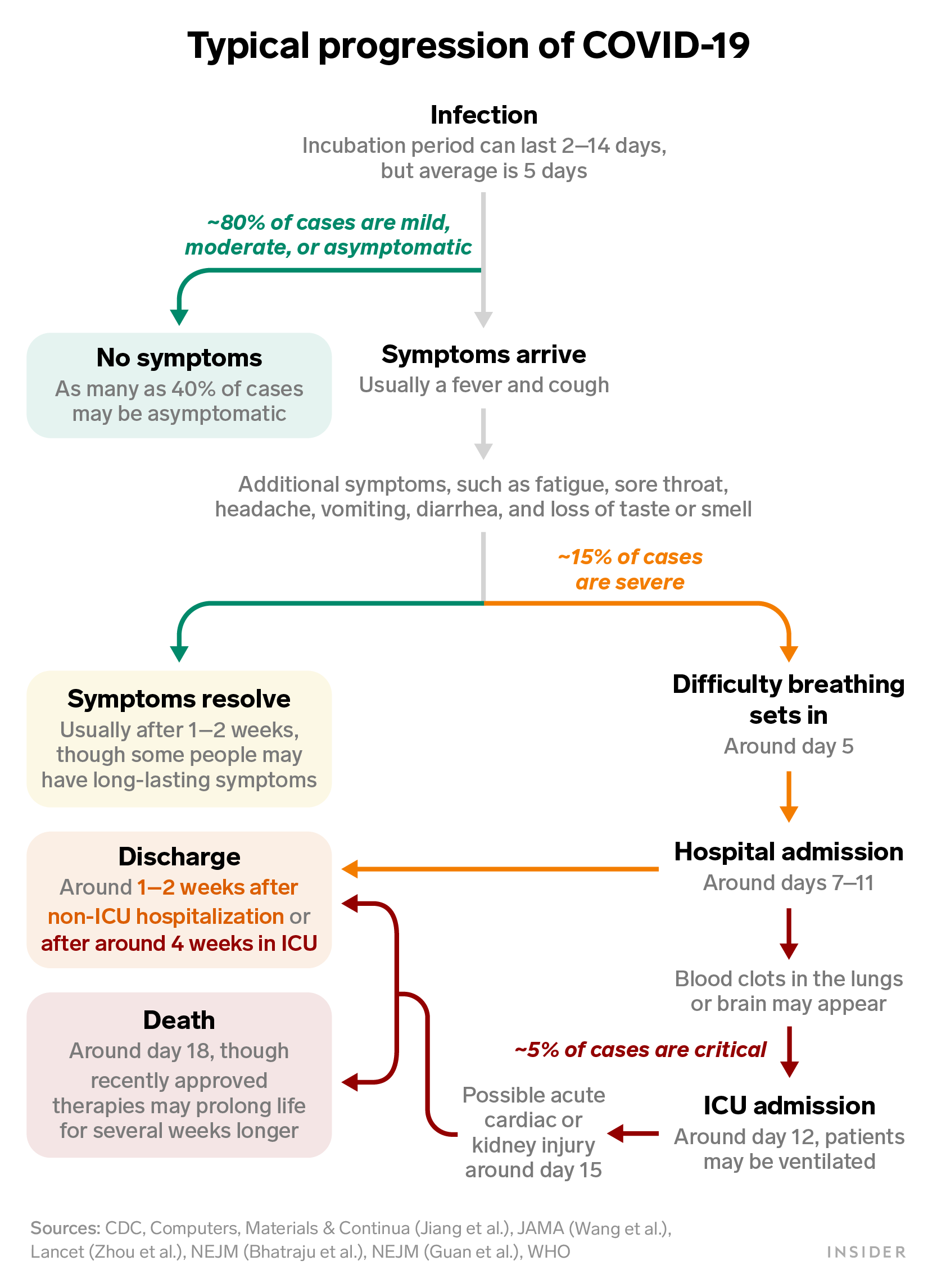 Just because patients leave the hospital, though, doesn’t mean their symptoms are fully gone. Some coronavirus patients report having symptoms for months, including chest pain, shortness of breath, nausea, heart palpitations, and loss of taste and smell.

People who got sick and were never hospitalized can have lingering symptoms, too. A July report from CDC researchers found that among nearly 300 symptomatic patients, 35% had not returned to their usual state of health two to three weeks after testing positive. Patients who felt better after a few weeks said their symptoms typically resolved four to eight days after getting tested. Loss of taste and smell usually took the longest to get back to normal, they said: around eight days, on average.

Though the coronavirus attacks the lungs first, it can infect the heart, kidneys, liver, brain, and intestines as well. Some research has suggested that COVID-19 is a vascular disease instead of a respiratory one, meaning it can travel through the blood vessels. This is the reason for additional complications like heart damage or stroke.

Scientists have a few theories about why some coronavirus patients take a rapid turn for the worse. One is that immune systems overreact by producing a “cytokine storm” â€” a release of chemical signals that instruct the body to attack its own cells.

Dr. Panagis Galiatsatos, a pulmonary physician at Johns Hopkins Bayview Medical Centre, compared that process to an earthquake â€” generally, it’s the falling buildings that kill someone, not the quake itself.

The most concerning symptom: shortness of breath

Once symptoms appear, some early signs should be treated with more caution than others.

“I would of course always ask about shortness of breath before anything, because that’s somebody who has to be immediately helped,” Megan Coffee, an infectious-disease clinician who analysed the Wenzhou data, told Business Insider.

Patients who develop ARDS may need to be put on a ventilator in ICU. Coffee estimated that one in four hospitalized COVID-19 patients wind up on the ICU track. Those who are ultimately discharged, she added, should expect another month of rest, rehabilitation, and recovery.

But viewing coronavirus infections based on averages can hide the fact that the disease often doesn’t progress in a linear fashion.

“Courses can step by step worsen progressively. They can wax and wane, doing well one day, worse the next,” Coffee said. “An 80-year-old man with medical issues can do quite well. Sometimes a 40-year-old woman with no medical issues doesn’t.”

This story was originally published February 21, 2020. It has been updated over time with additional research findings.