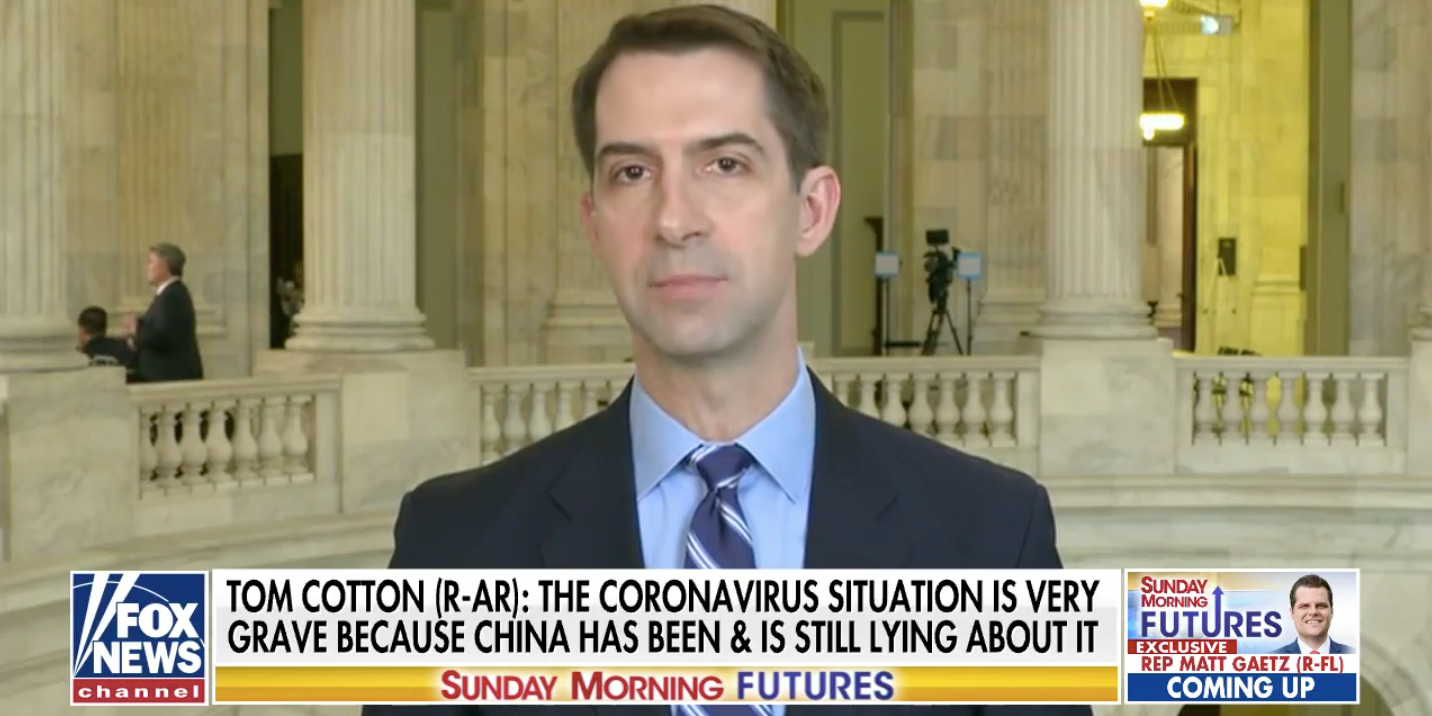 Sen. Tom Cotton is persistently resurfacing a debunked conspiracy theory which claims the deadly coronavirus sweeping the globe is the work of Chinese scientists at a secret Wuhan lab for biological warfare.

The Republican senator raised concerns about the Wuhan National Biosafety Laboratory while appearing on “Sunday Morning Futures” on Fox News.

“Now, we don’t have evidence that this disease originated there, but because of China’s duplicity and dishonesty from the beginning we need to at least ask the question,” Cotton said of the lab.

“This virus did not originate in the Wuhan animal market,” he said.

Tom Cotton reiterates his suggestion that the Coronavirus originated at a super-lab in Wuhan pic.twitter.com/i1cSNSqU0d

The National Biosafety Laboratory is part of the Chinese Academy of Sciences, and is classed “Cellular Level Biosafety Level 4” – meaning it works on the most dangerous pathogens, like Ebola, according to the lab’s website.

Cotton’s theory has already been thoroughly debunked by multiple scientists.

“There’s absolutely nothing in the genome sequence of this virus that indicates the virus was engineered,” Richard Ebright, a professor of chemical biology at Rutgers University, told The Washington Post Sunday.

“The possibility this was a deliberately released bioweapon can be firmly excluded.” 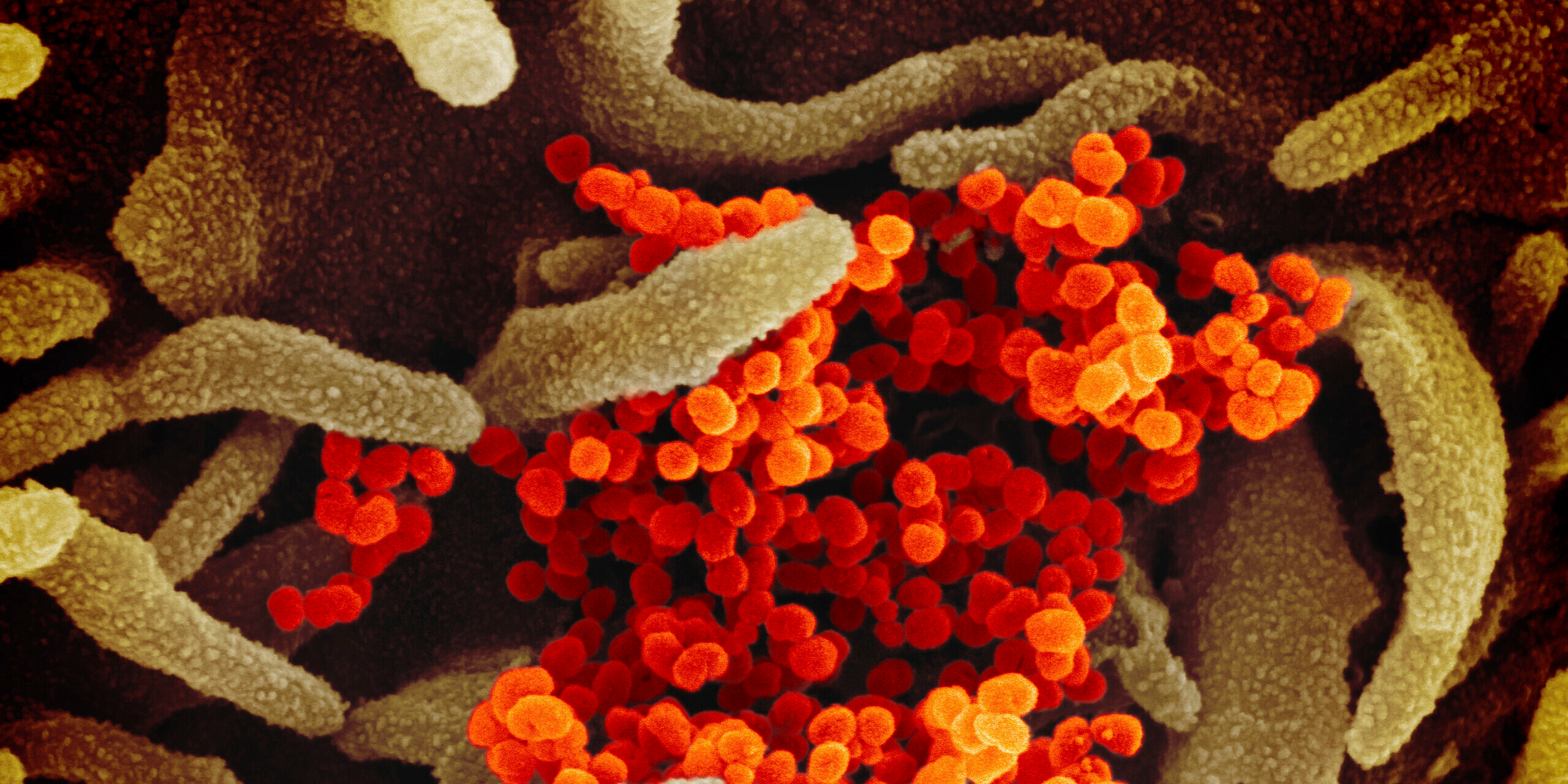 Associated PressThis scanning electron microscope image shows SARS-CoV-2 (orange)—also known as 2019-nCoV, the virus that causes COVID-19—isolated from a patient in the U.S., emerging from the surface of cells (green) cultured in the lab.

“I don’t think it’s particularly helpful, and it’s borderline irresponsible to – and it’s without evidence, so at this point it’s a conspiracy theory – peddle it,” he told the newspaper. 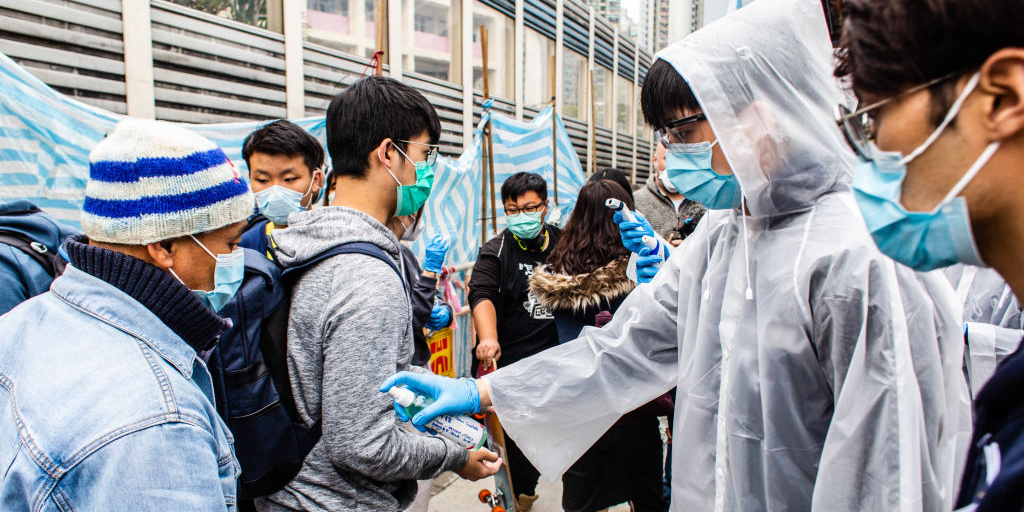 “The rumour is circulating but there is no evidence to date that this is true,” the expert said, according to Tapper.

“Hopefully the WHO team will get the samples from the original cases and we will be able to figure this out. Until then, I put it in the conspiracy theory bucket.”

In response, Cotton doubled down on his claims, saying in a series of tweets: “It’s not a ‘theory’ and certainly not a ‘conspiracy theory,’ but rather a hypothesis.”

“But given the CCP’s ongoing dishonesty, we have to examine the hypothesis and demand the evidence,” he added, referring to the Chinese Communist Party.

Suspicion over the origins of the coronavirus comes as China continues to search for a cure, and faces accusations that it had suppressed information about the virus. When the SARS coronavirus broke out in China in the early 2000s, the government initially covered it up. 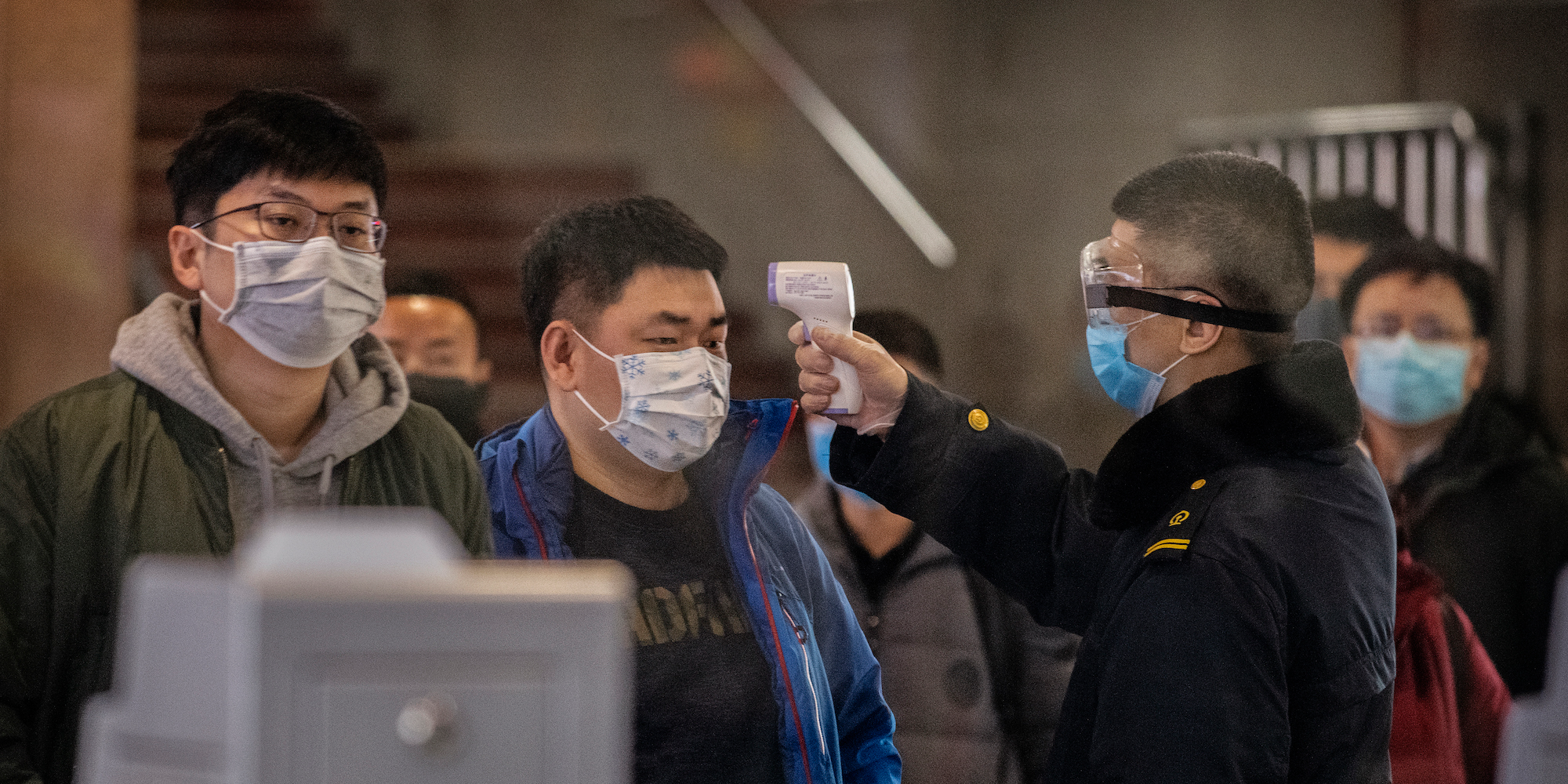 Kevin Frayer/Getty ImagesPassengers who just arrived on a train from Wuhan, China are screened for coronavirus in Beijing.

Cotton has aired this theory as early as February 9, saying in a tweet: “Fact: super-lab is just a few miles from that market.”

“Where did it start? We don’t know. But burden of proof is on you & fellow communists. Open up now to competent international scientists,” he added.

The theory has also been seriously considered by the Daily Mail and The Washington Times.

However, the Wuhan lab at the centre of the theory is actually “relatively open compared with other Chinese institutes” and “has strong ties” to a number of similar US institutes, The Post reported.

Medical workers, government officials, and social media networks are trying to mute swaths of misinformation relating to the coronavirus.

Zero Hedge, a popular financial blog, was permanently suspended from Twitter in January for peddling the same theory as Cotton.

The outlet had published an article titled “Is This The Man Behind The Global Coronavirus Pandemic?” which blamed a scientists at Wuhan’s Institute of Virology for releasing the virus.

And according to The Post, Hu Xijin, editor Chinese’s state-run Global Times tabloid, said there was actually a conspiracy theory in China that the US made the virus.