Chinese researchers confirmed that patients can transmit the coronavirus without showing symptoms. A woman passed it to 5 relatives. 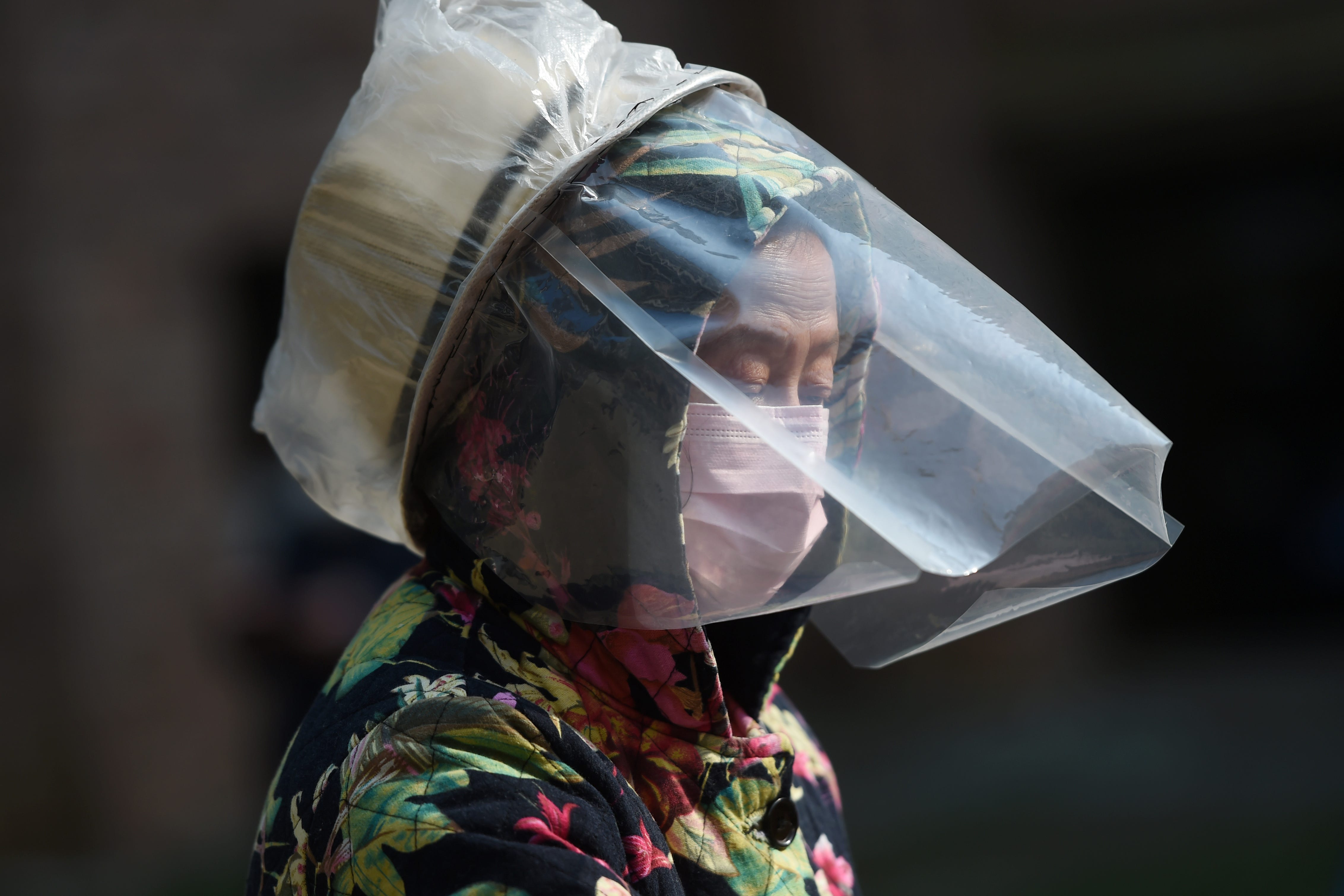 Stringer/ReutersA woman dons a makeshift protective face shield at a residential compound in Wuhan, the epicentre of the novel coronavirus outbreak.

Chinese researchers have confirmed a case of asymptomatic transmission of the new coronavirus: A 20-year-old woman from Wuhan passed it to five of her family members but never got physically sick herself.

The case study, released last week, was the first concrete evidence that a person showing no symptoms can pass the coronavirus to others – a fact that could make curbing the outbreak even more challenging.

The researchers behind the finding said the 20-year-old woman was isolated and closely observed at the Fifth People’s Hospital of Anyang. She never become physically ill, even after her family members developed fevers. Two of them got severe pneumonia.

For now, the woman’s asymptomatic transmission appears to be an anomaly, but health experts have documented other instances in which people tested positive for the virus without showing symptoms.

Chinese researchers identified a 45-year-old teacher from Wuhan who passed the virus to others before his symptoms appeared. The teacher attended an academic conference in on February 5, while feeling fine, and ate dinner with two other teachers a day later. They became infected. After returning to Wuhan, the 45-year-old came down with a fever, cough, and sore throat.

A report from the Chinese Centre for Disease Control and Prevention analysed records of all of China’s reported cases of the virus from December 8 to February 11 and found that 1.2% of patients confirmed to be infected showed no symptoms. A far higher portion of asymptomatic cases was found on the Diamond Princess cruise ship, where 380 of the 691 people tested positive but showed no symptoms.

“It’s very clear that the people who are getting caught in that umbrella of reporting are the people that present themselves to a hospital,” Anthony Fauci, director of the National Institute of Allergy and Infectious Diseases, said at a briefing on February 6. “There’s another whole cohort that is either asymptomatic or minimally symptomatic.” 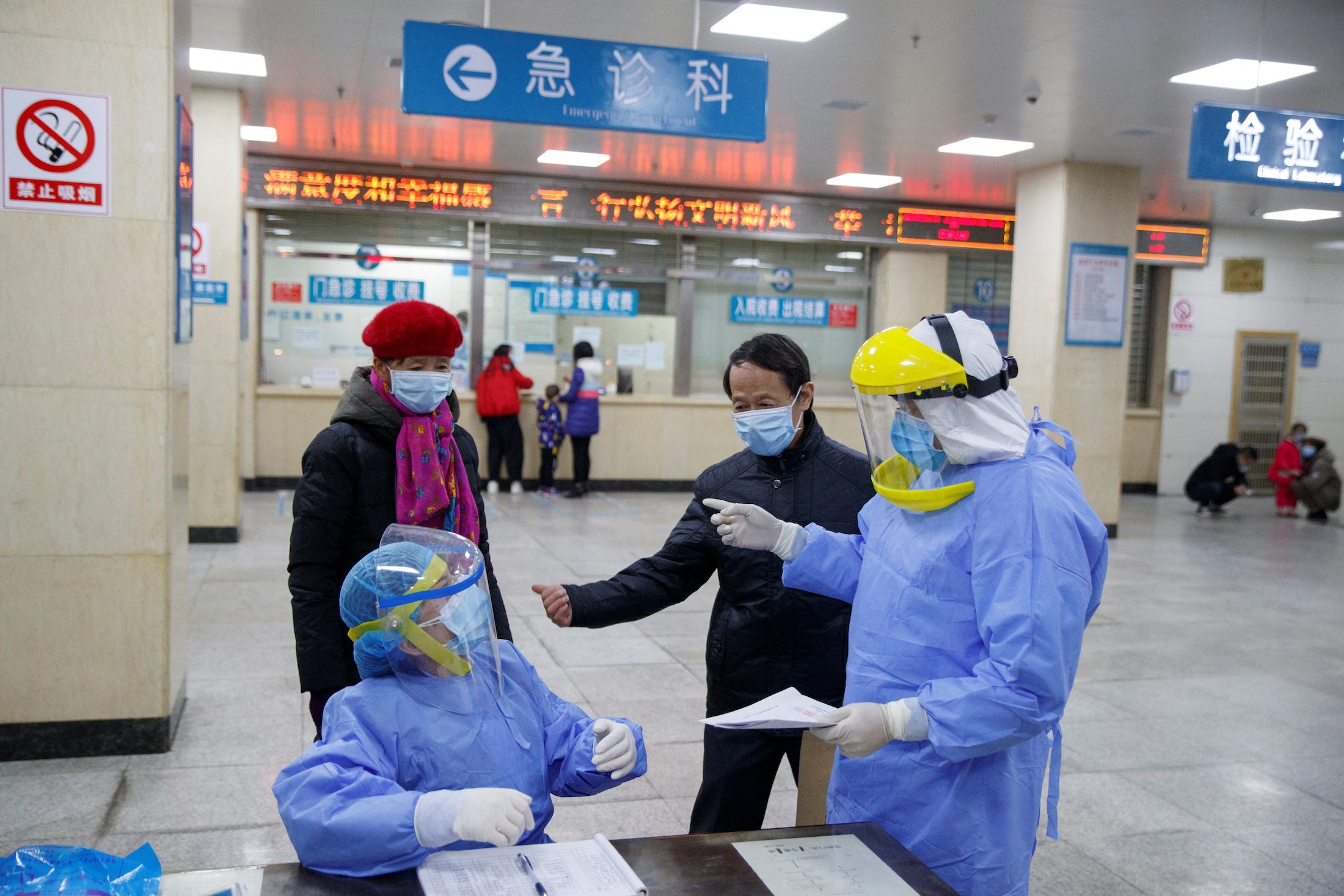 Reuters/Thomas PeterNurses in protective gear talk to people in the reception area of the First People’s Hospital in Yueyang, Hunan Province, China, January 28, 2020.

The 20-year-old woman in the recent case study lives in Wuhan – the city where the outbreak started – but travelled to Anyang on January 10. Three days later, she went with five family members to visit a sick patient (who did not have the coronavirus) at the Anyang District Hospital.

On January 17, one of the woman’s family members came down with a fever and sore throat. The following week, the other four relatives developed a fever and respiratory symptoms. Those relatives were admitted to the Fifth People’s Hospital on January 26.

All of the family members tested positive for the coronavirus. The only person they’d had contact with who had been in Wuhan was their 20-year-old relative.

When doctors initially tested the young woman for the coronavirus, the results came back negative. Her CT scan was normal, too. But a day later, she tested positive for the virus even though she wasn’t showing any symptoms. By February 11, the woman still had no fever, cough, sore throat, or gastrointestinal issues.

Doctors concluded that the woman’s incubation period – the time during which she was infectious – was 19 days. Chinese health officials previously estimated that the incubation period for the virus ranged from one to 14 days, but recent research suggests it could be as long as 24 days.

The US and many other countries have established quarantine rules for travellers from Wuhan based on that 14-day window.

Most of the coronavirus cases so far have been mild, but the virus has killed more than 2,600 people and infected nearly 80,000. Though the majority of cases are on the Chinese mainland, the virus has spread to 34 other countries.

A case of asymptomatic transmission similar to the one in the new case study was previously identified in Germany. But that research turned out to be flawed.

According to a letter published in the New England Journal of Medicine, a woman from Shanghai transmitted the virus to a33-year-old German businessman in January. Three days later, he felt better and went back to work, then infected at least two of his colleagues. But the researchers had not spoken with the woman, who had in fact experienced mild symptoms at the time of transmission.

That left scientists unsure as to whether people who never experience any symptoms can transmit the disease, but the latest research confirms that it can happen.