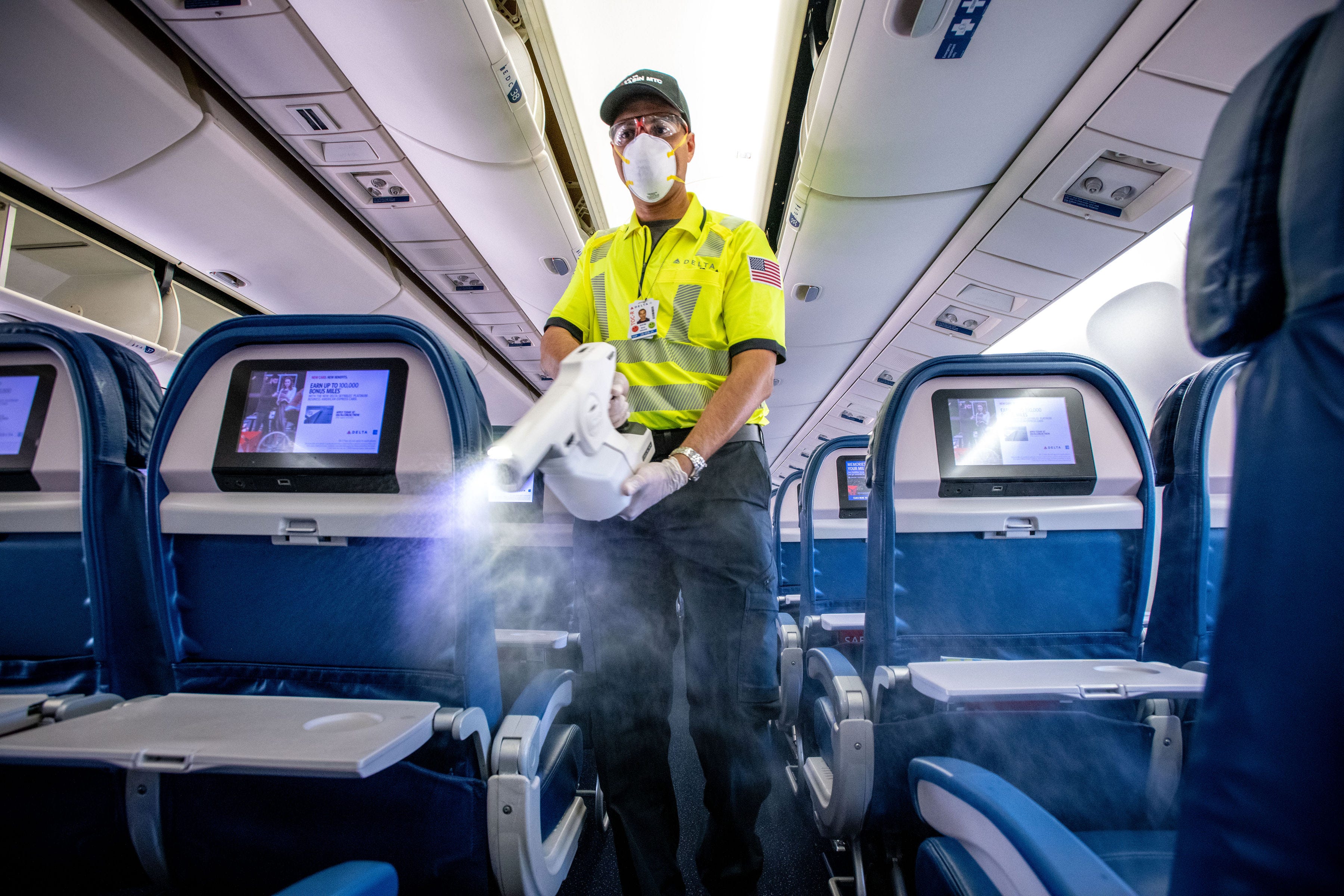 Delta Air LinesMost airlines carry out anti-coronavirus spraying, or fogging, at least daily. Here, a Delta Air Lines worker applies fogging disinfectant before a flight. The new product American Airlines will begin uses remains effective for up to a week.

American Airlines just added a new weapon to its arsenal for the ongoing fight against the pandemic: a disinfectant that kills COVID-19 on surfaces for a full week after it’s applied.

The US Environmental Protection Agency announced on Monday that it had issued an emergency authorization to the state of Texas, allowing the state to clear American Airlines (which is headquartered in Fort Worth) to use the new disinfectant.

The product, known as SurfaceWise2, can kill viruses and bacteria for up to seven days after being applied, EPA Administrator Andrew Wheeler said during a press conference on Monday. Allied BioScience, which manufactures the stuff, is pushing for its permanent approval, Wheeler said.

American Airlines plans to use SurfaceWise 2 for additional protection on its planes, part of an effort to increase consumer confidence and boost demand for air travel, said David Seymour, American Airlines’ chief operating officer. Seymour said that the product would be applied to planes via an electrostatic spraying process, similar to what most US airlines are currently using to disinfect planes, as aircraft cycle through the airline’s Dallas-Fort Worth hub. The disinfectant’s use won’t replace regular cleaning.

Although COVID-19 is thought to be able to spread from surface contact, Wheeler admitted that SurfaceWise 2 would not protect against the main way the virus is believed to be transmitted: respiratory droplets and aerosols. “The virus is thought to spread mainly through close contact between individuals,” he said.

The emergency authorization was granted only to Texas because no other states applied for it, Wheeler said. Texas-based Total Orthopedics Sports & Spine will also be cleared to use the disinfectant.

“We assume with today’s announcement that other states are going to start looking to see if they could apply,” Wheeler said. “We can’t just give a blanket exemption for another use of the product. We would have to check to see, for example, on the impact on … different surfaces.”

Wheeler said that SurfaceWise 2 was the only product approved by the EPA to last as long as a week.

US airlines have added new cleaning and disinfection procedures as the coronavirus pandemic has shattered demand for air travel. Airlines have previously suggested that the single applications of the disinfectant they currently use could inactivate COVID-19 virus for days, although most airlines carry out the spraying, or fogging, at least daily.

Southwest Airlines, for instance, said that it applies a disinfectant followed by an anti-microbial material every 30 days, which the manufacturer says remains effective for up to three months. The airline also uses a disinfectant nightly and between flights. A spokesperson for the airline said that the technique is certified by the EPA and by Boeing.

“Southwest is confident in our current approach to cleaning but will always monitor the marketplace for approved and emerging innovations that support the well-being and comfort of our Employees and Customers,” Southwest said in a statement.