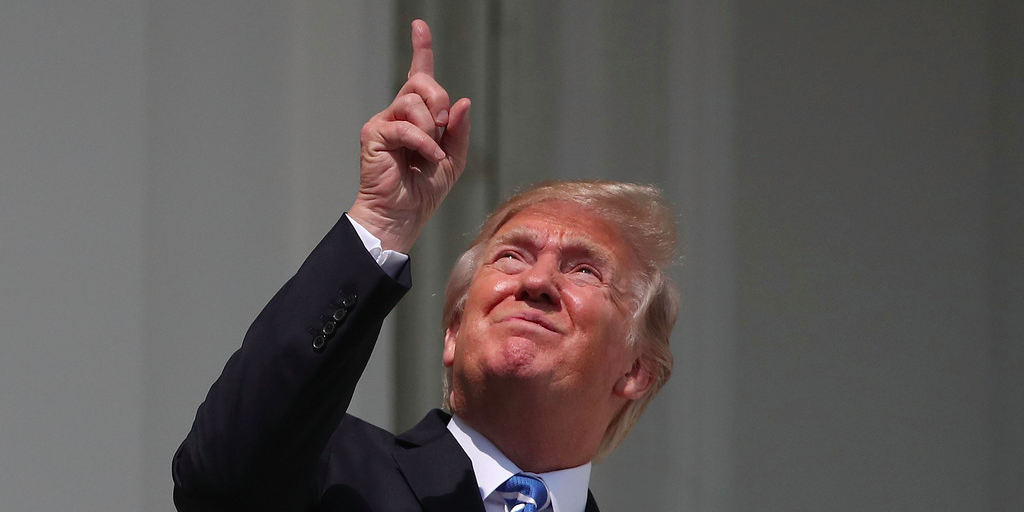 Mark Wilson/Getty ImagesThis is a photo from that time Trump stared directly into the sun during an eclipse. So.

Now that coronavirus aid bill have moved from discussions between Senate Republicans to negotiations between the White House and Democrats, the stability of the global economy depends on Donald Trump’s attention span.

As economists often say: “when America sneezes, the world catches a cold.” That means when US economy hurts, the global economy hurts too. Right now pretty much every economist across the board is saying that delaying aid to Americans suffering through the coronavirus pandemic will significantly weaken our economy, and that puts the world at risk.

This worry about delayed aid goes especially for the extra $US600 the federal government has been tacking on to people’s weekly unemployment checks. Over at Moody’s, economist Mark Zandi estimates that failing to continue those payments could result in 1.1 million lost jobs by the end of the year.

Without the federal supplement, weekly unemployment benefits nationwide average out to under $US400 a week.

This is the problem Donald Trump now has on his shoulders, but it’s obvious he can’t really focus on it. For the entirety of these discussions he’s been trying to tack on irrelevant ($US1.8 billion for a new FBI building) or completely unhelpful (a payroll tax break) items that everyone hates onto the bill. Weeks ago he was even trying to get funding for coronavirus testing removed from the bill – as if that’s not the reason why we’re all here.

Trump does not care what economists say until the stock market starts falling, and he does not care about the day-to-day lives of Americans suffering through this pandemic unless he sees solid proof – over and over again – they are part of his base. So do not be surprised if he throws a tantrum and continues to delay this process to get one of his items inserted into the bill.

The Senate majority could’ve stopped this madness by writing a proper bill – one that Democrats could feasibly negotiate from. But instead Republican members descended into ideological rage and infighting when confronted with the prospect of continuing to help suffering Americans – as if the money they were going to give back to the people doesn’t already belong to the people. The bill they wrote was a non-starter for Democrats, adding more difficulty to the White House’s task.

McConnell kicked negotiations for this bill to the White House because his caucus is too weak to take political responsibility for something that might be controversial to the libertarian wing of its party. This level of spending revolts them, so Senate Republicans needed Trump’s political stamp of approval to absolve them.

The November election promises to be brutal for the GOP, and the party needs Trump’s followers if it’s going to survive. Unfortunately, Trump can’t seem to pay attention to the issue every single human being on earth cares about right now, the coronavirus. He’s still thinking about his petty grievances and insatiable greed. The GOP is captured, and so are we.