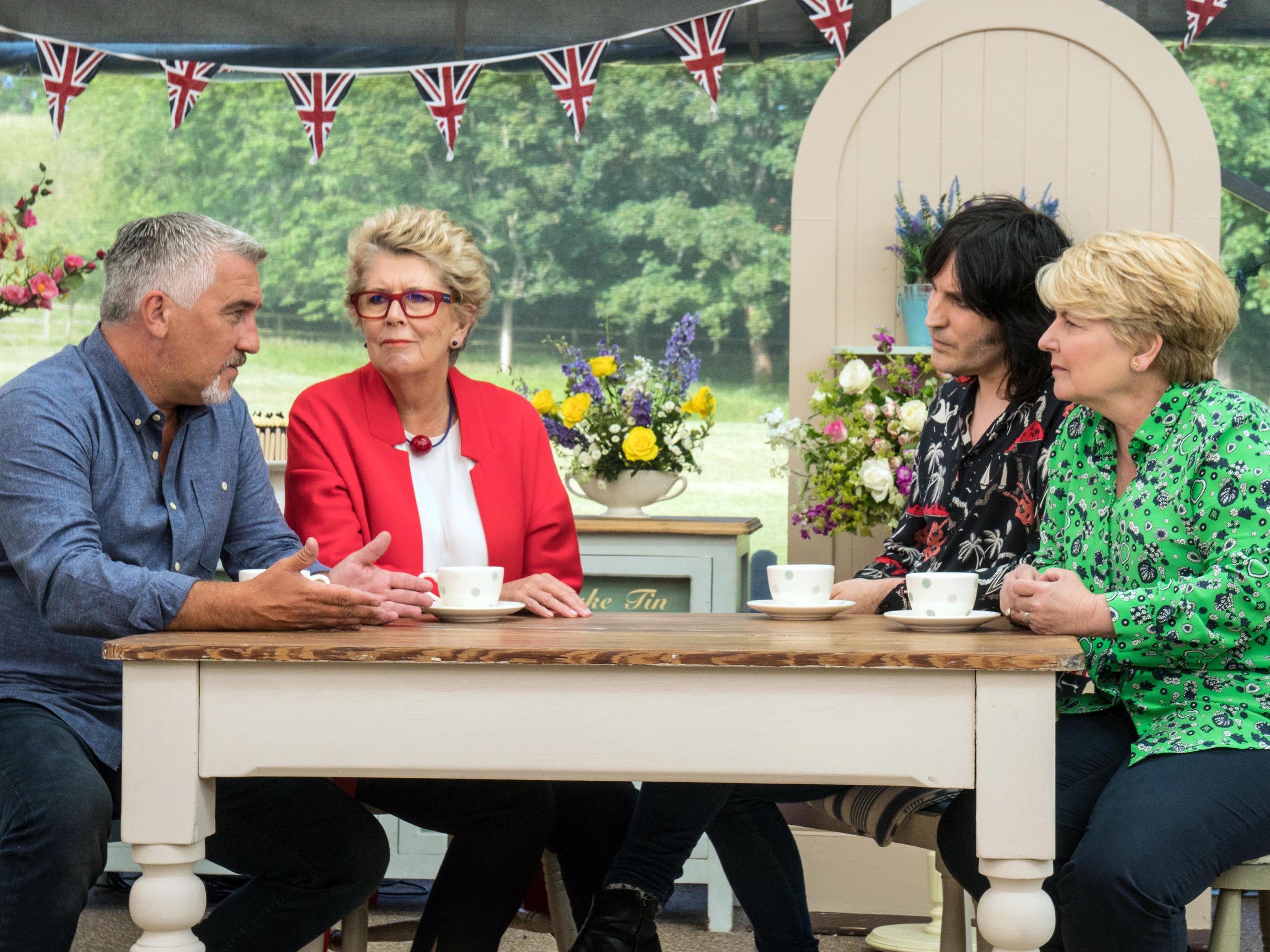 On “The Great British Baking Show,” wholesome fun collides with a genuine love of baking as 12 amateur home cooks compete to create the best sweets.

But even the superfans of the series might not know everything that goes on behind-the-scenes.

Read on for 18 little-known facts about “The Great British Baking Show.”

The show has a different name in the US because of Pillsbury. 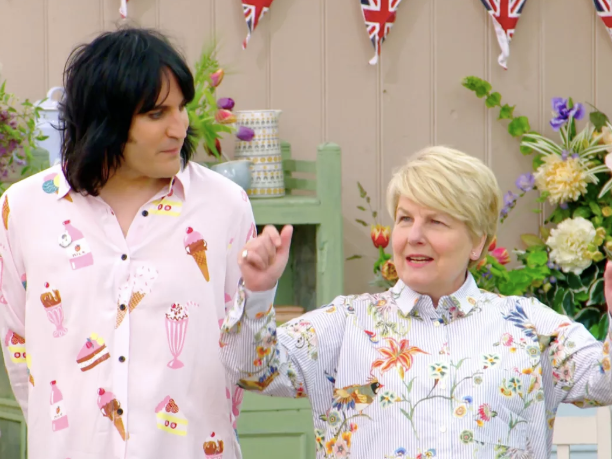 BBCIn the UK, the show is titled ‘The Great British Bake-Off.’

The term was used in 1949 when the brand celebrated its 80th anniversary by asking consumers for their best recipes using its flour.

The top 100 submissions were entered in a live competition in New York City in the Grand National Recipe and Baking Contest – which later became known as the Pillsbury Bake-Off.

Season 11 was shot in less time as usual, and contestants had to stay isolated for six weeks. 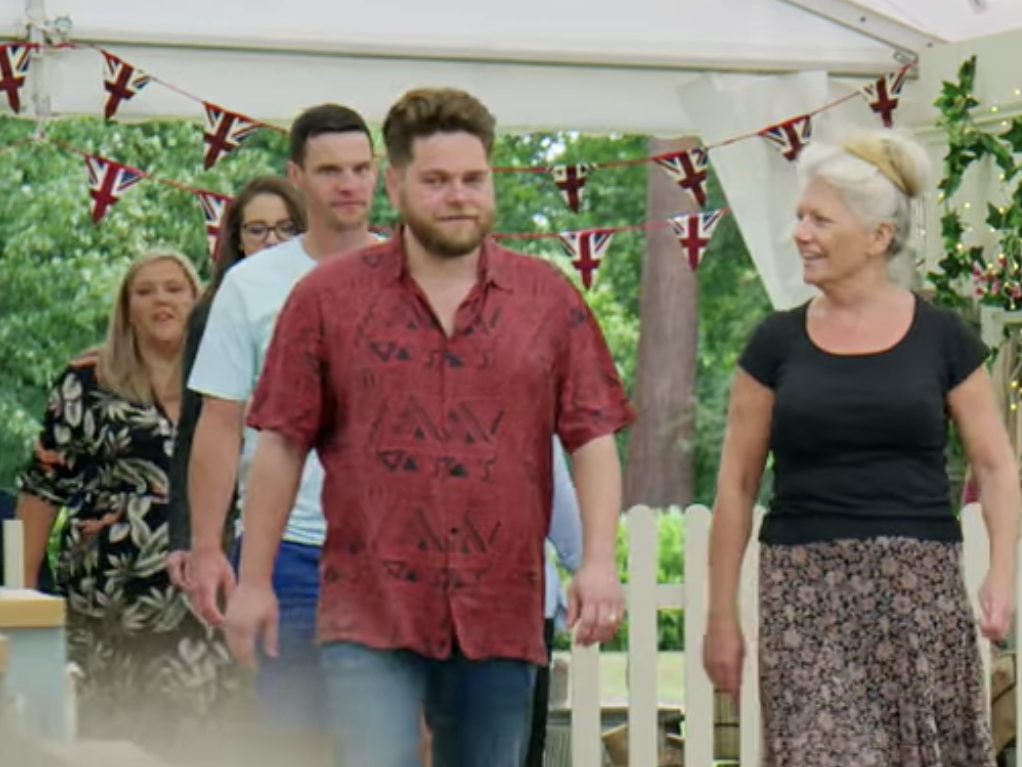 Producer Kieran Smith told Radio Times in 2020 that the show had to organise a “self-contained biosphere” for the 12 contestants, cast, and crew due to COVID-19 safety concerns.

The show’s normally shot over the span of 12 to 13 weeks (mostly on weekends), but this season was filmed in half that.

“…We asked, ‘Can you take six weeks off work and come and live in a biosphere?'” Smith said. “Everything was complicated, everything was different, but everybody wanted to do it.”

The UK cannot get enough of “The Great British Bake-Off.” Nearly 11 million people watched the first episode of the new season last month, making it Channel 4’s largest non-film broadcast since 1985, according to the network.

In 2016, the show also made history when 15.9 million viewers watched the season-seven finale, the largest audience the UK’s recorded since the London Olympics in 2012.

It’s still one of Britain’s most popular shows, which cocreator and executive producer Richard McKerrow chalked up to the nature of the show.

“It is a television series, but we always try to think of it as an event, almost like a Wimbledon, or an Olympics,” McKerrow told The New York Times in 2020,

There’s a long application process to become a contestant. 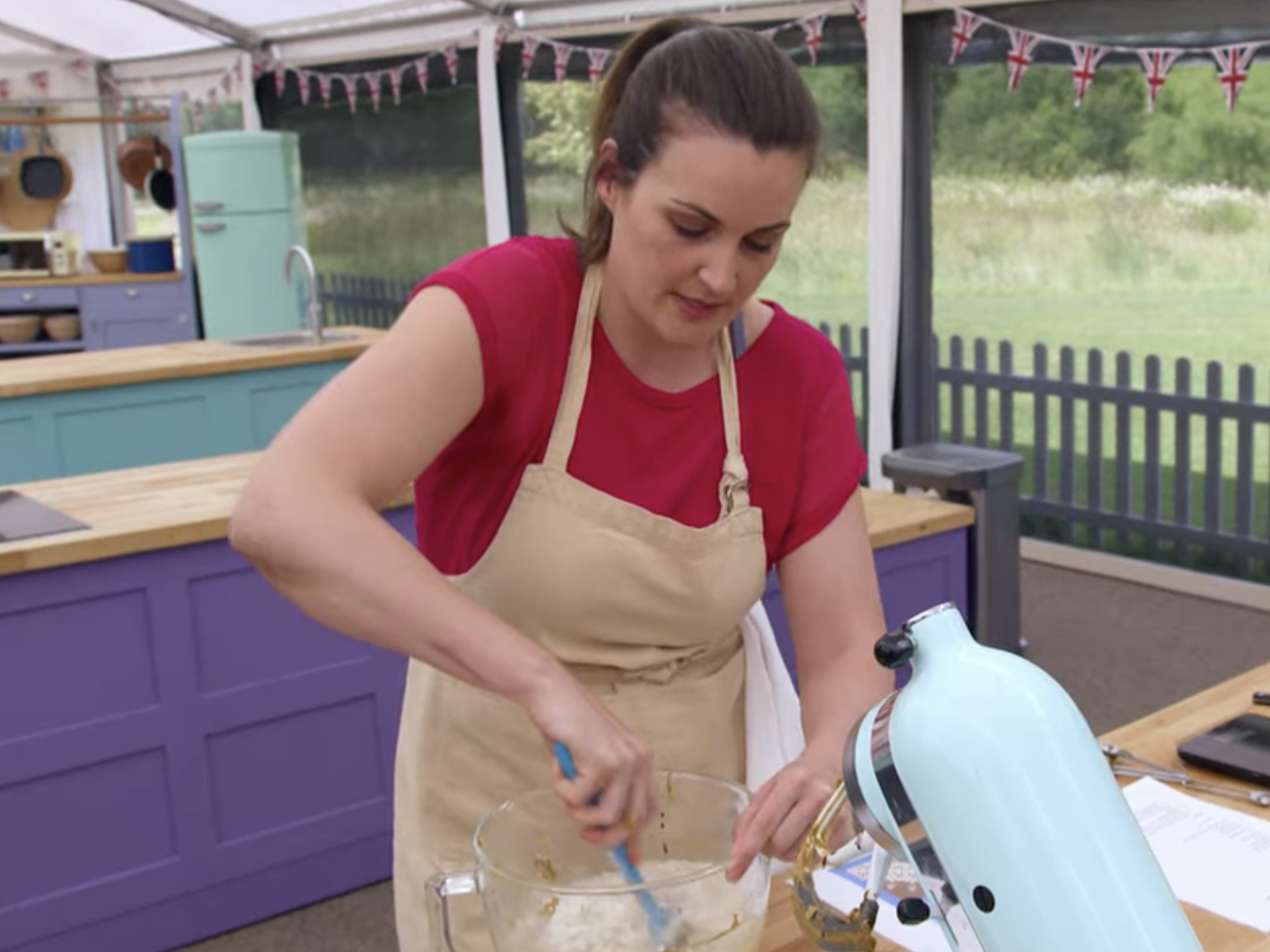 If you meet the age requirement, UK residency status, and amateur-baker title, you need to fill out a seven-page application to be considered.

The show’s 2017 winner Sophie Faldo told Radio Times in 2019 that the application is quite long.

“It focuses mostly on your baking,” she said of the application. “Every section, like bread and cakes, and biscuits, has its own page and you have to say what your signature bake is and how often you bake it.”

If selected after an additional phone interview, applicants then meet show executives in person and are judged on baked goods they make in both on- and off-camera tests.

Faldo added, “You have to bake something while you’re there, to make sure you’ve not just been bringing in someone else’s work. It’s also to see that we were happy baking and talking at the same time and how we cope with that.” 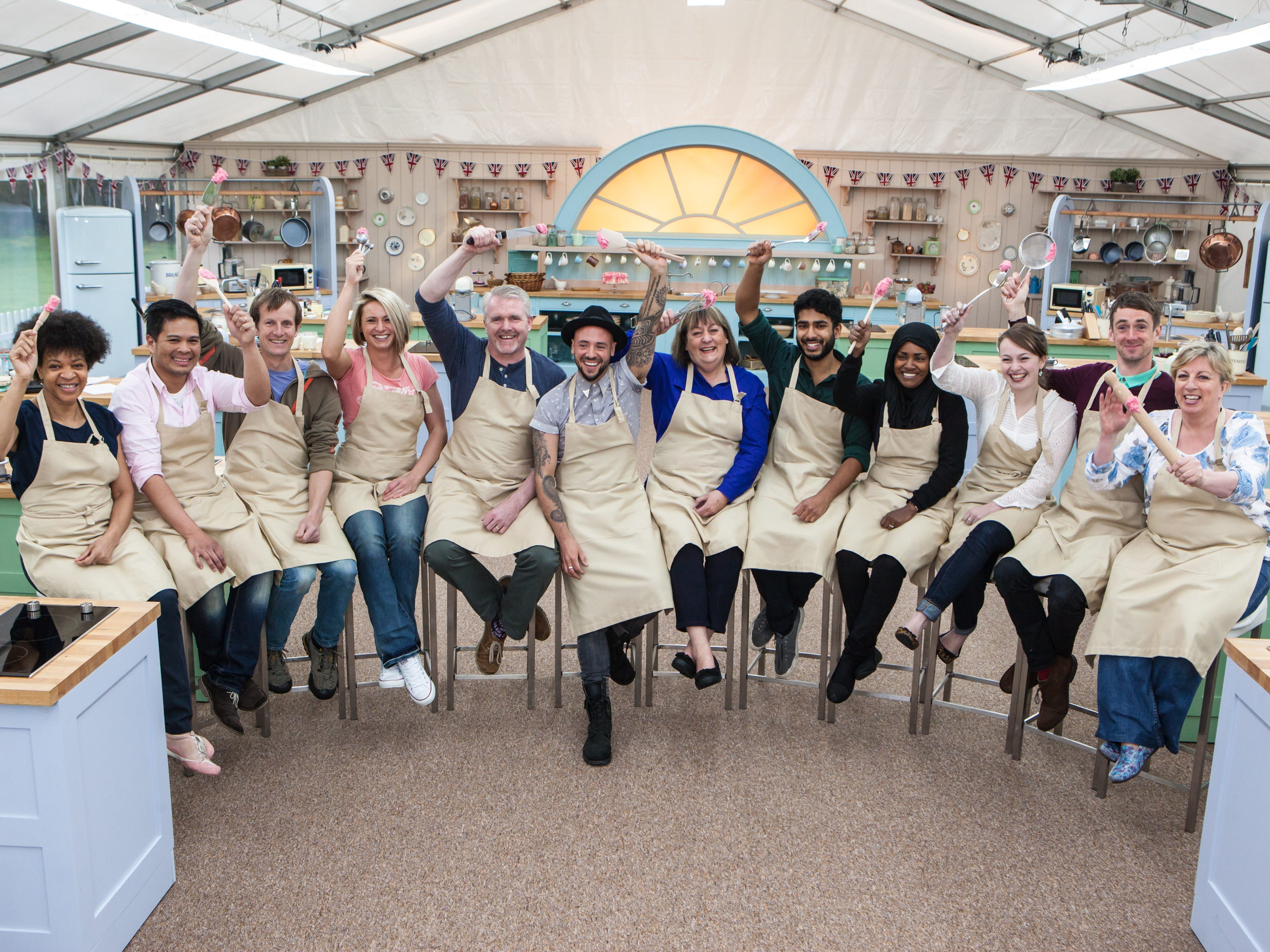 PBS PressRoomOnly 12 of 12,000 applicants are chosen to compete on ‘The Great British Baking Show’ each year.

Of those 12,000 applicants, 300 to 400 people get a first-round audition, and 50 to 60 applicants make it to the second round. The final 12 are picked after the filmed technical challenge.

The show looks for bakers with traditional skills who also use new techniques. But ultimately, the decision comes down to the contestant’s skills.

The show’s producer Sam Beddoes told BBC Good Food, “When it comes down to deciding who goes on the show, it’s based on baking, not personality. You can have brilliant characters, but if they’re going to go out in the first round there’s no point” 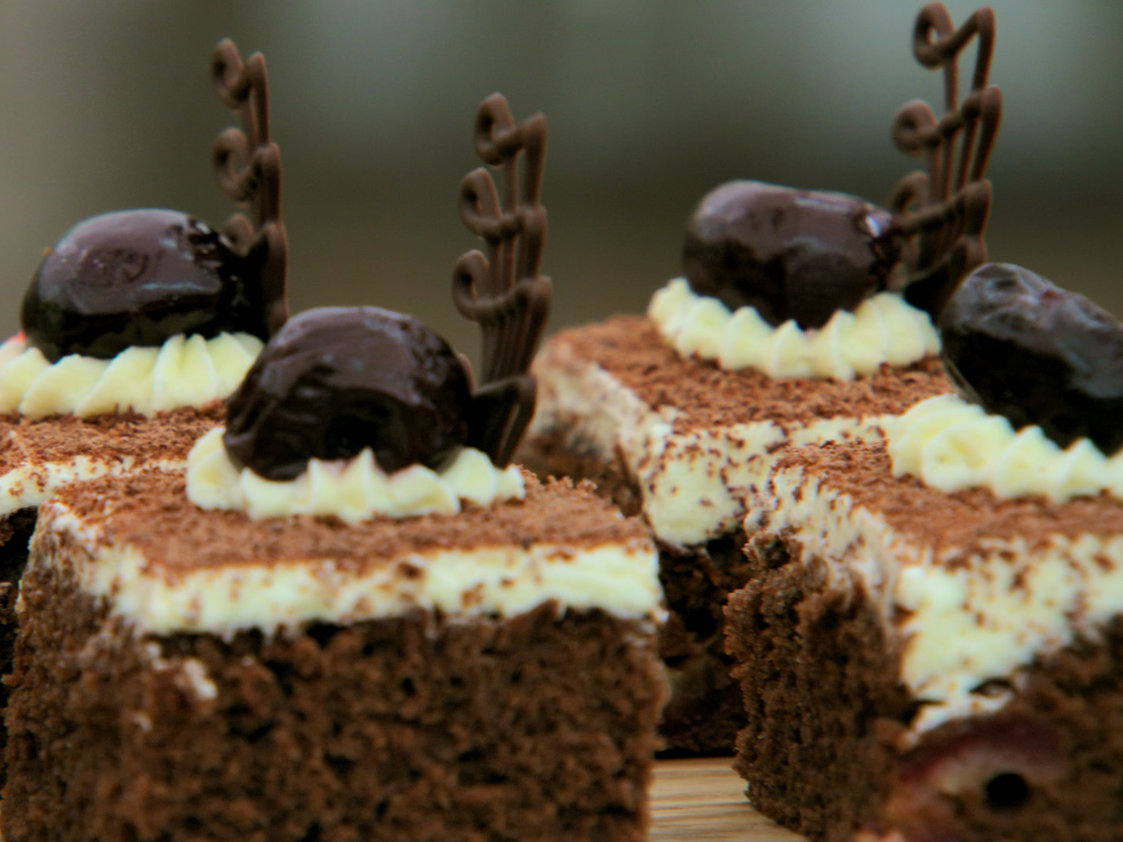 BBC/NetflixThe ‘home economics’ team gets all the ingredients the contestants need for their bakes.

Though episodes typically take two days to shoot, the “home economics” team starts working a few days before shooting so they can get ingredients together.

“Basically we’re in charge of everything to do with the food and the equipment,” Georgia May, a member of the team, told The Guardian in 2014. “We’ve got to make sure the contestants are happy. They can specify what brand of a product they want, we have to get it and then de-brand it for screen.”

The ovens are tested each day before shooting. 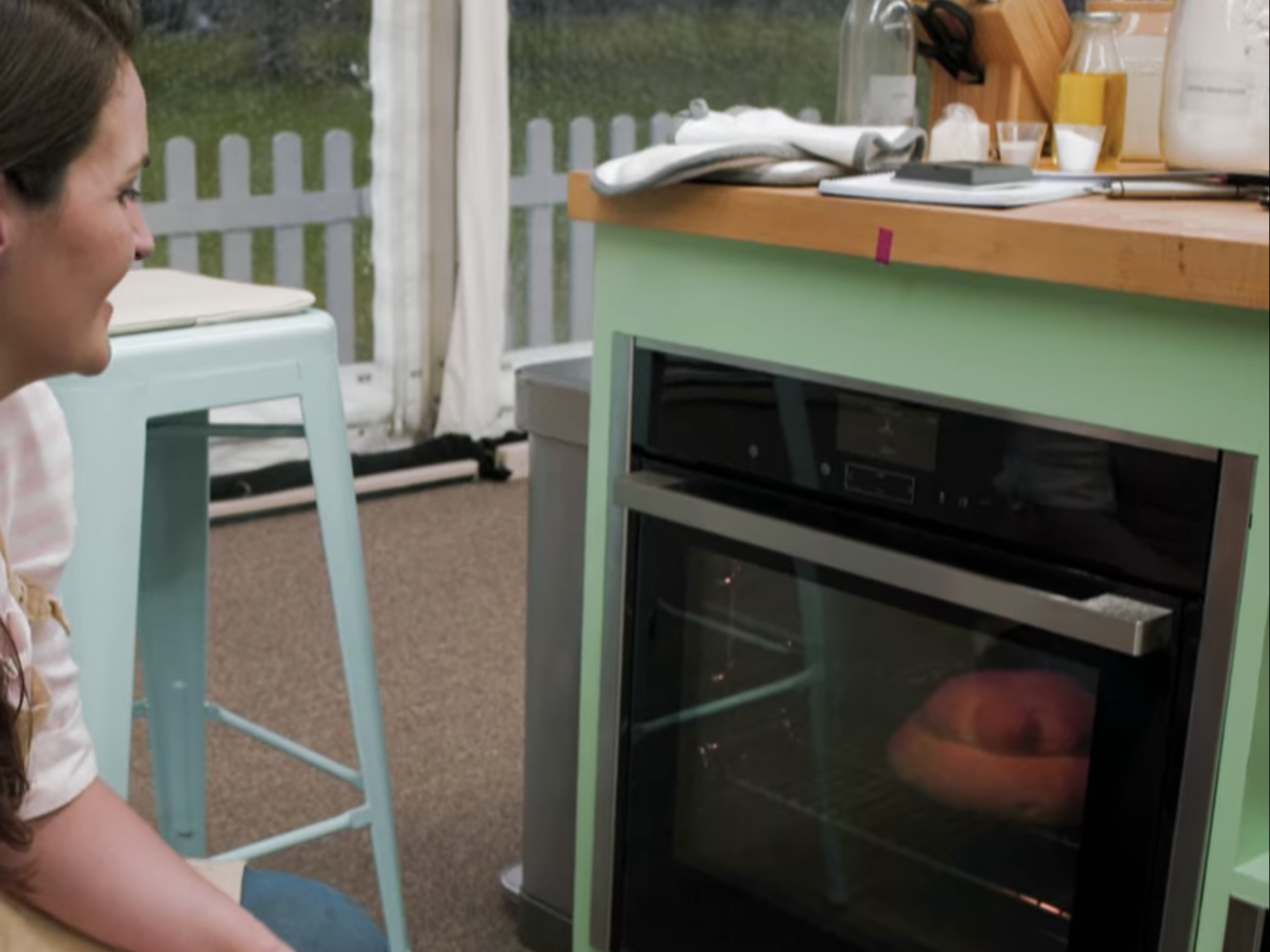 “We mark each one, then get a runner to stand at each station with their cake mix so we can be sure they have all gone into the oven at the same time and can be properly tested,” May told The Guardian. “We just have to be certain we’re fair.”

“They do that to make sure that all the ovens are working properly and no-one can blame a bad bake on a technical malfunction,” former competitor Ali Imdad told BirminghamLive in 2017. 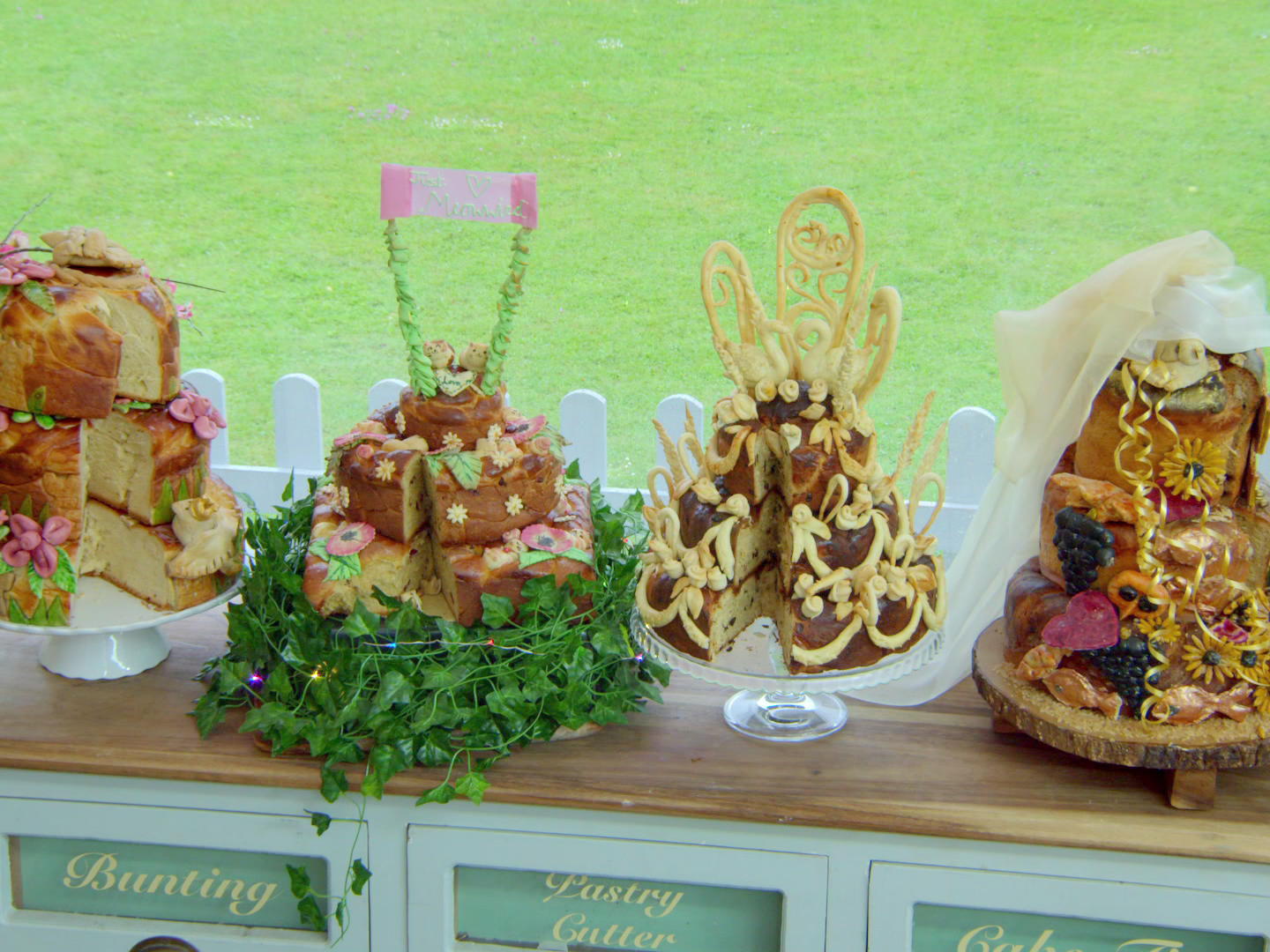 Despite the amount of baking on the show, no food goes to waste in the tent.

As Imdad told BirminghamLive, some crew members “literally stand there with forks in their back pockets, waiting to swoop as soon as filming stops.”

Imdad said that if there are leftovers, they’re taken to the lunch area to share but “they don’t usually get that far because the crew eats them first.”

Judges, not producers, decide who stays and goes. 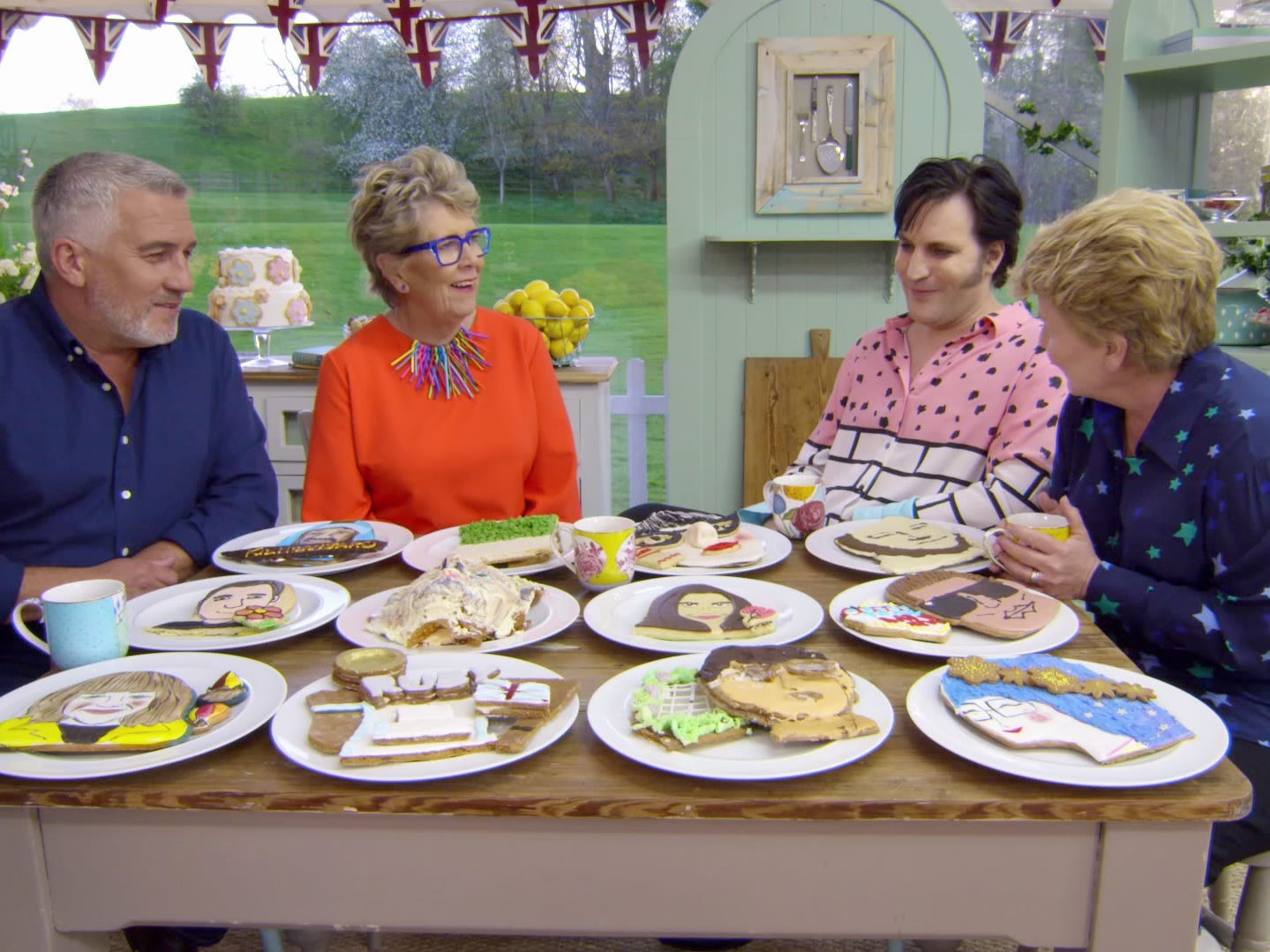 BBC/NetflixPaul Hollywood and Prue Leith are the current ‘Bake-Off’ judges.

Contrary to reality-show stereotypes, the judges have total control over who gets the boot.

Before the show begins, contestants must have plans for their final bakes. 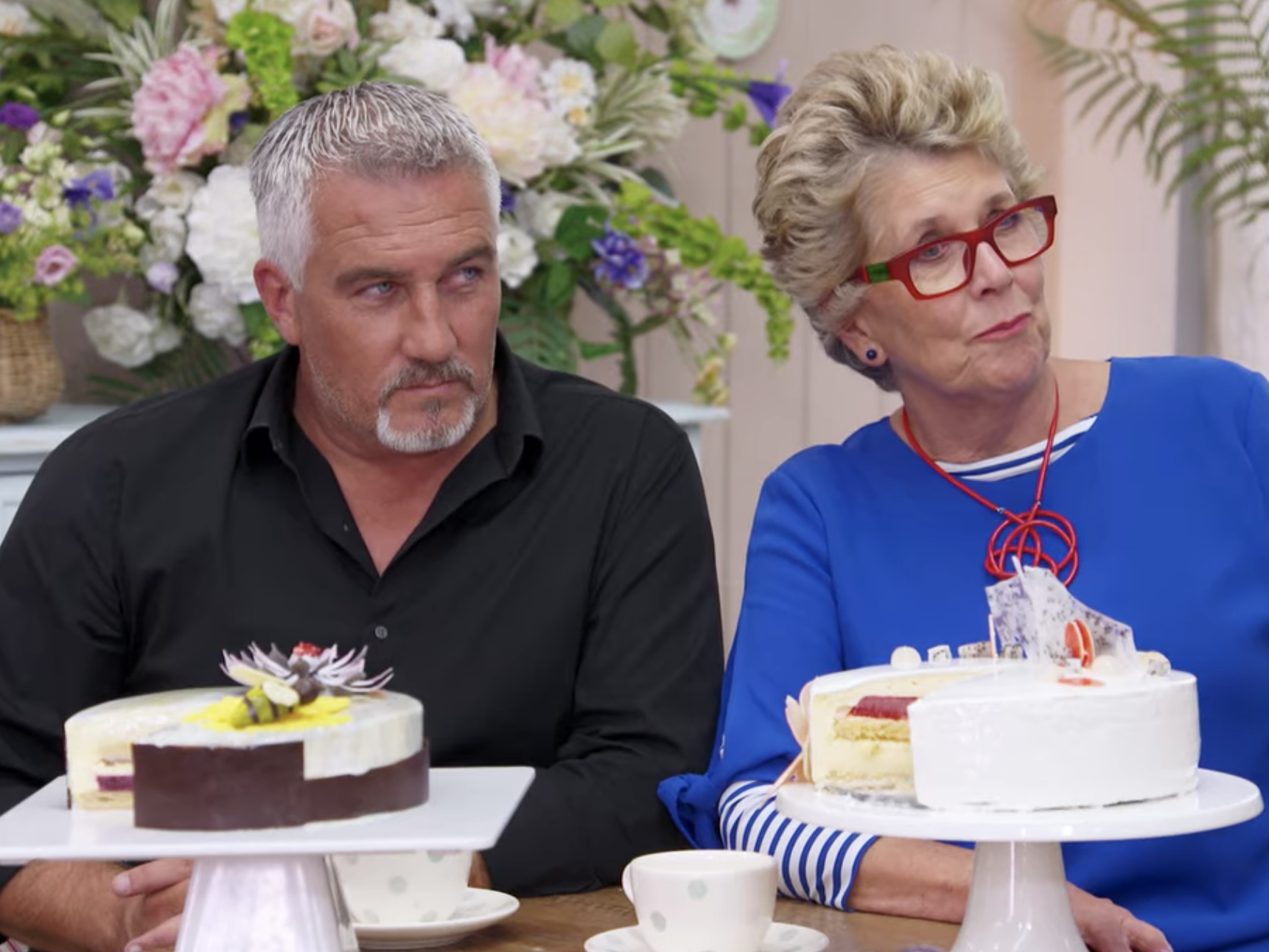 BBC/NetflixContestants must prepare their final bake recipes well in advance.

Before they start filming, contestants must turn in the “10 signature and showstopper bake recipes” they would make in the finale if they make it that far.

The recipes are then examined by Chloe Avery, the show’s food producer.

“The Great British Baking Show” has its own illustrator. 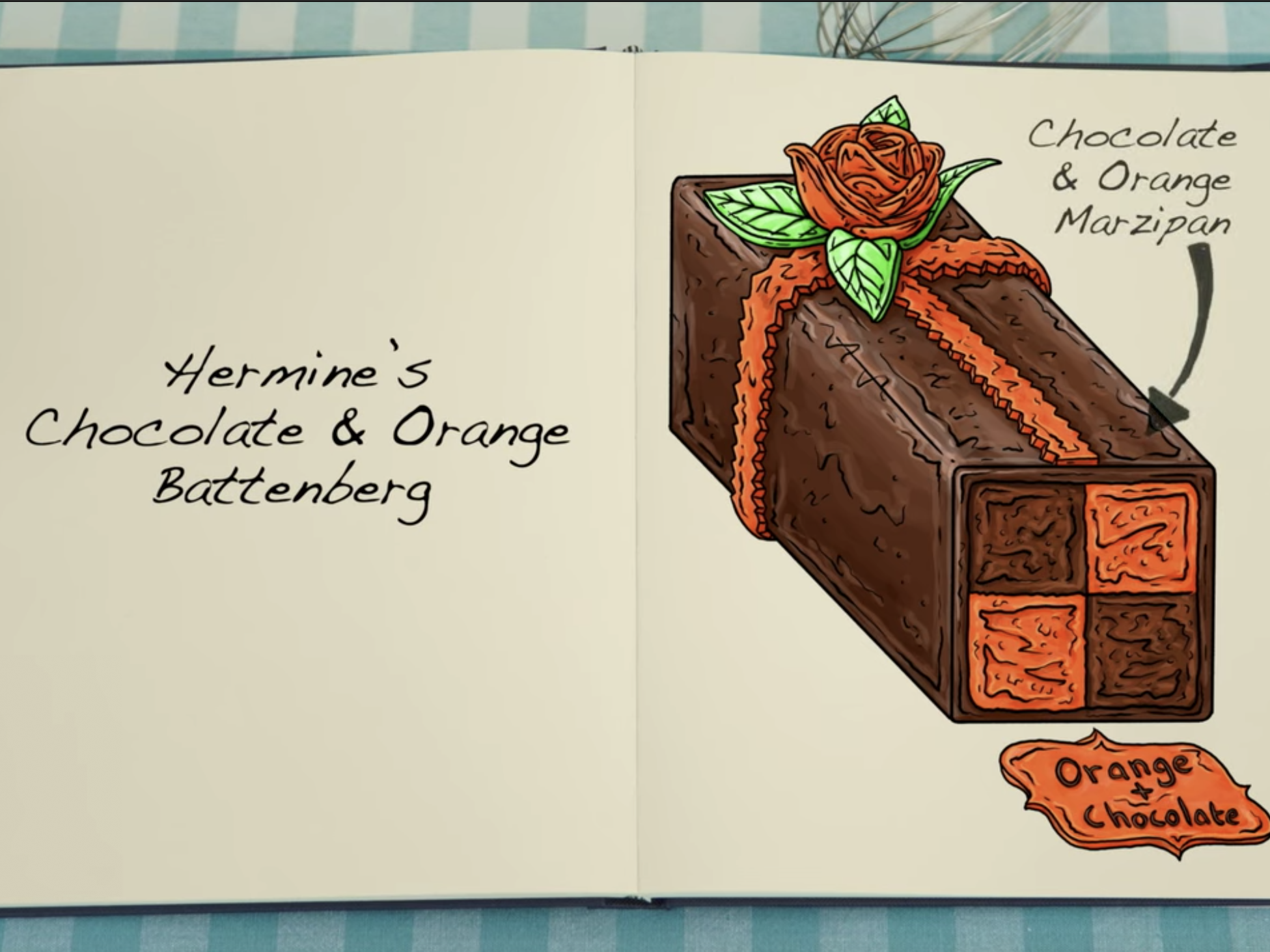 Tom Hovey has worked for the show since its start in 2010 and has also produced the graphics for the show’s spin-offs, like “Junior Bake-Off.” He has drawn over 3,000 baked goods.

After each episode is filmed, Hovey receives photos of the finished bakes and he spends about a week illustrating.

“My illustrations are a representation of what the bakers hope to create,” he told BBC. “Even if the bakers don’t produce what they have intended to, I have a degree of artistic licence to make them look good.” The show’s 2013 winner Frances Quinn told Cosmopolitan in 2019 that contestants are interviewed about eight times a day so the producers can get enough content for an hour-long show.

“They just have to get so much footage for an hour show,” Quinn said. “You’re being interviewed about eight times a day, just so they have got every type of answer and every type of question has been asked.”

Producers want a camera filming every time the ovens are opened. 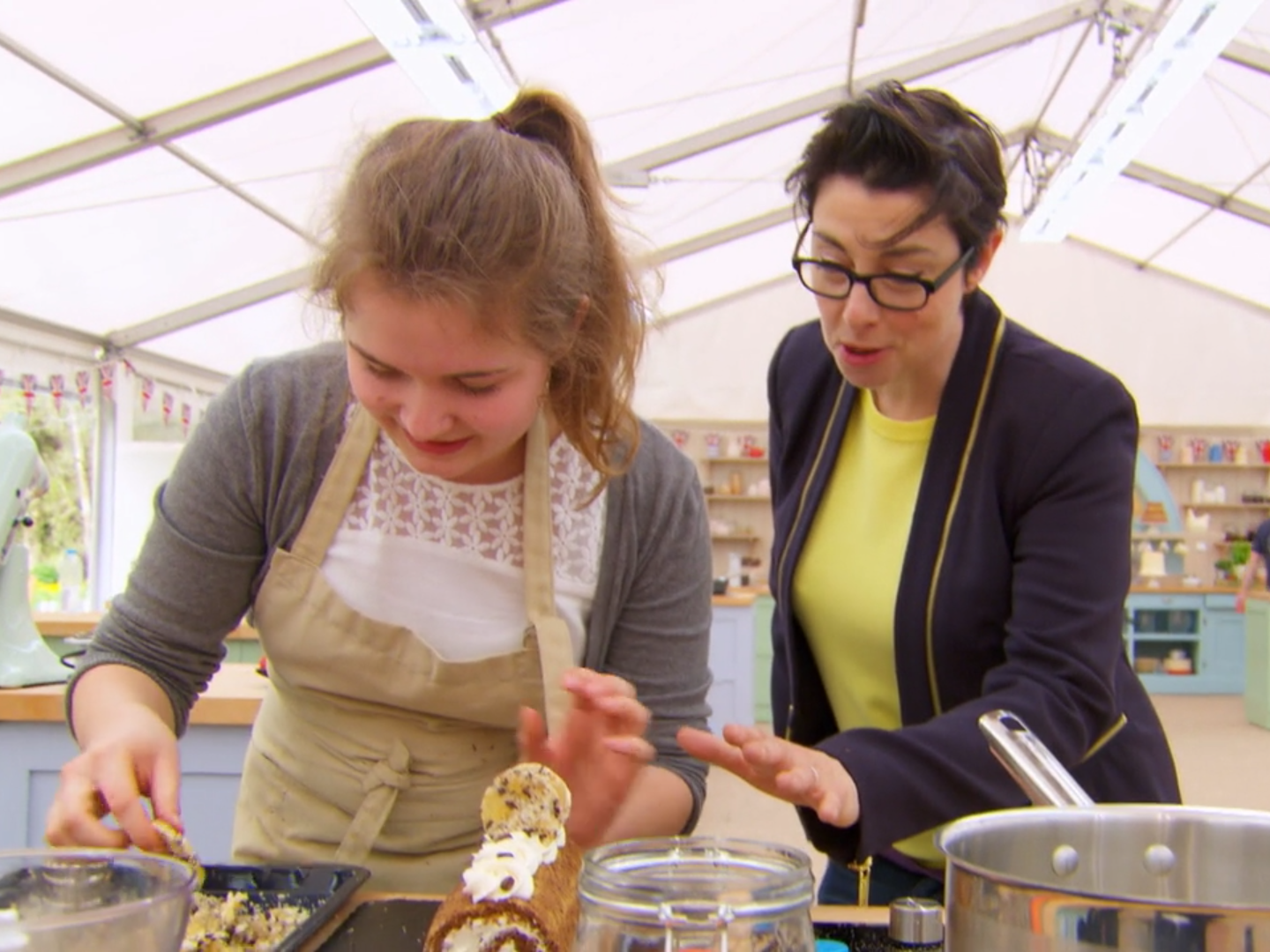 BBC via NetflixThe cameras try to catch every detail.

In the beginning, the 12 contestants may outnumber the cameras – but toward the end, Quinn said contestants should always expect a camera in their face.

” … They want a camera on you every time you’re going in the oven, looking in the oven, bringing something out of the oven,” she said. “The thing is to not express when something goes wrong – that’s when the camera will be on you.”

The tent conditions can affect the bakes. 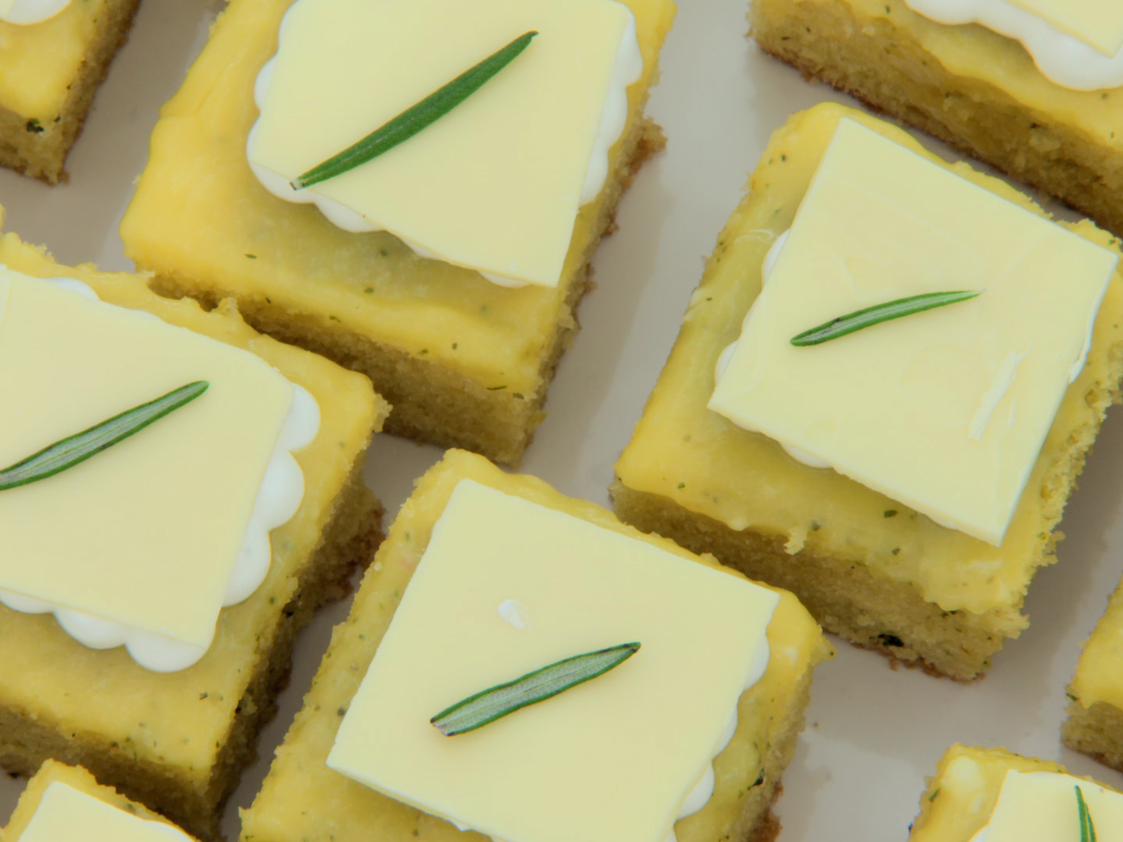 BBC/NetflixTemperature can affect the bakes.

Fluctuating temperatures, bouncy floors, and lack of time are just a few things that make conditions tough in the tent, according to Quinn.

“It’s completely alien to your own kitchen at home,” she said told Cosmopolitan in that same interview. “The temperature fluctuates-you’d be making a meringue and it would start raining, or we’d try and make pastry and it would be 27 degrees outside. The technical challenges and lack of time and lack of fridge and work-space are the enemy on that show.”

Bakers wear the same clothes for two days in a row while filming. Since episodes are often filmed over the course of a weekend, contestants are requested to keep the same look for continuity purposes.

“Luckily they change the aprons so we don’t look like a Jackson Pollock painting by the end of it,” Quinn told Cosmopolitan. 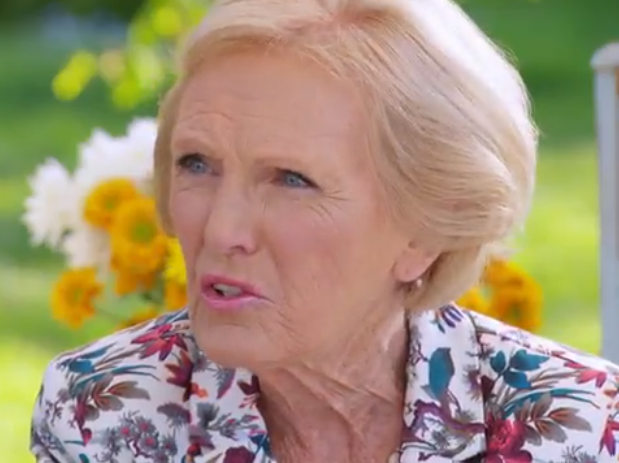 During downtime on set, the former judge said she used to binge the AMC drama “Breaking Bad” with former presenters Mel Giedroyc and Sue Perkins.

Berry told the Telegraph in 2014, “It’s better than motor racing, which [my husband] watches – though I’d prefer ‘Downton Abbey.'” 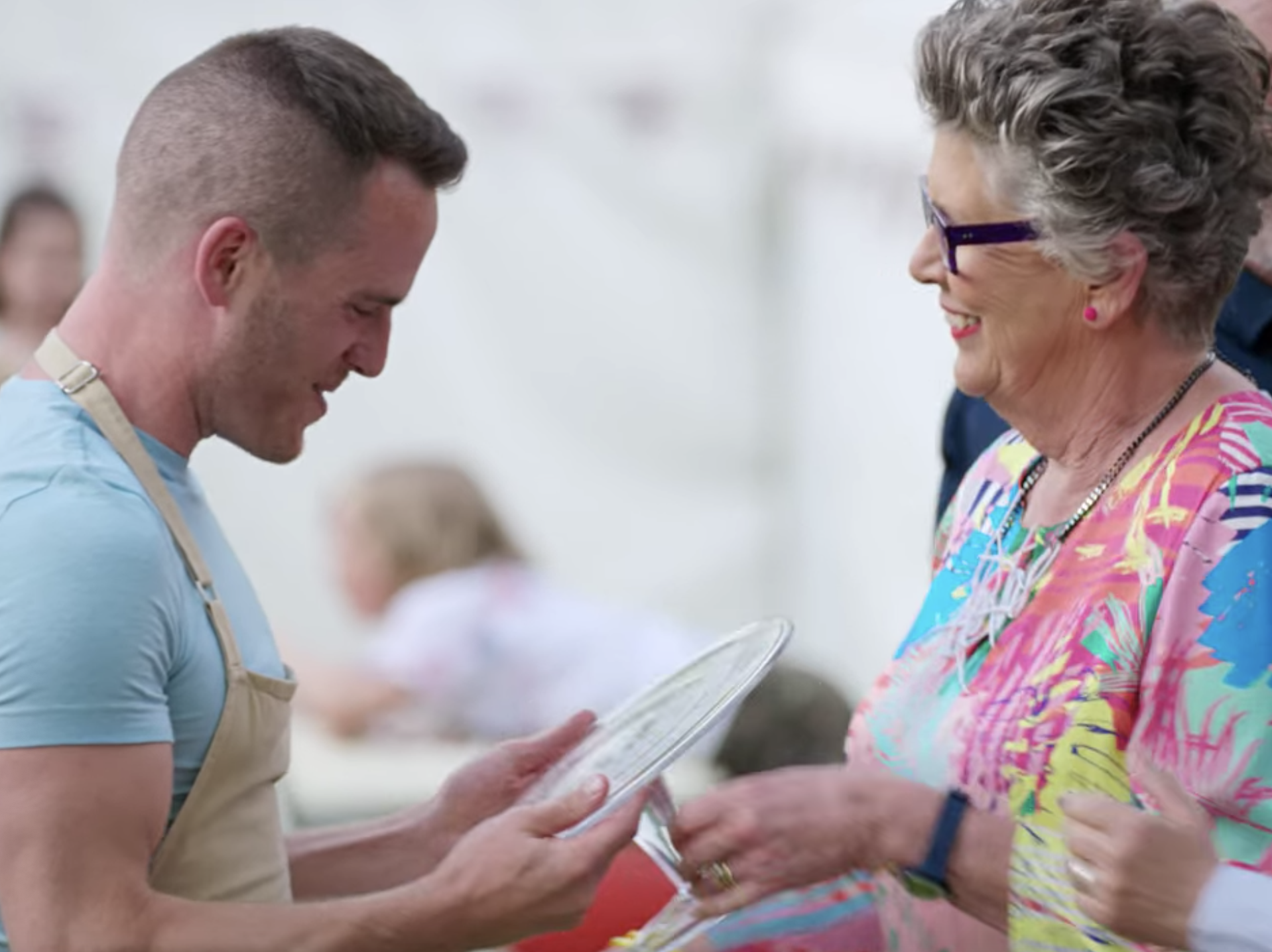 BBC/NetflixThe winner gets a cake stand and flowers.

Unlike cooking-competition shows like “MasterChef” where contestants compete to win $US250,000, the “The Great British Baking Show” offers no cash prize to the winner.

Instead, they receive a bouquet of flowers, a cake stand, and a bit of fame.

The show goes through a lot of baking supplies. According to The Guardian, during season four alone, the bakers went through over 440 pounds of flour, 176 pounds of chocolate, 330 pounds of sugar, 198 pounds of butter, 9 gallons of double cream, and 2,000 eggs. They also used 21 different types of flour.

In total, this amount of baking led to 208 hours of clean-up time.