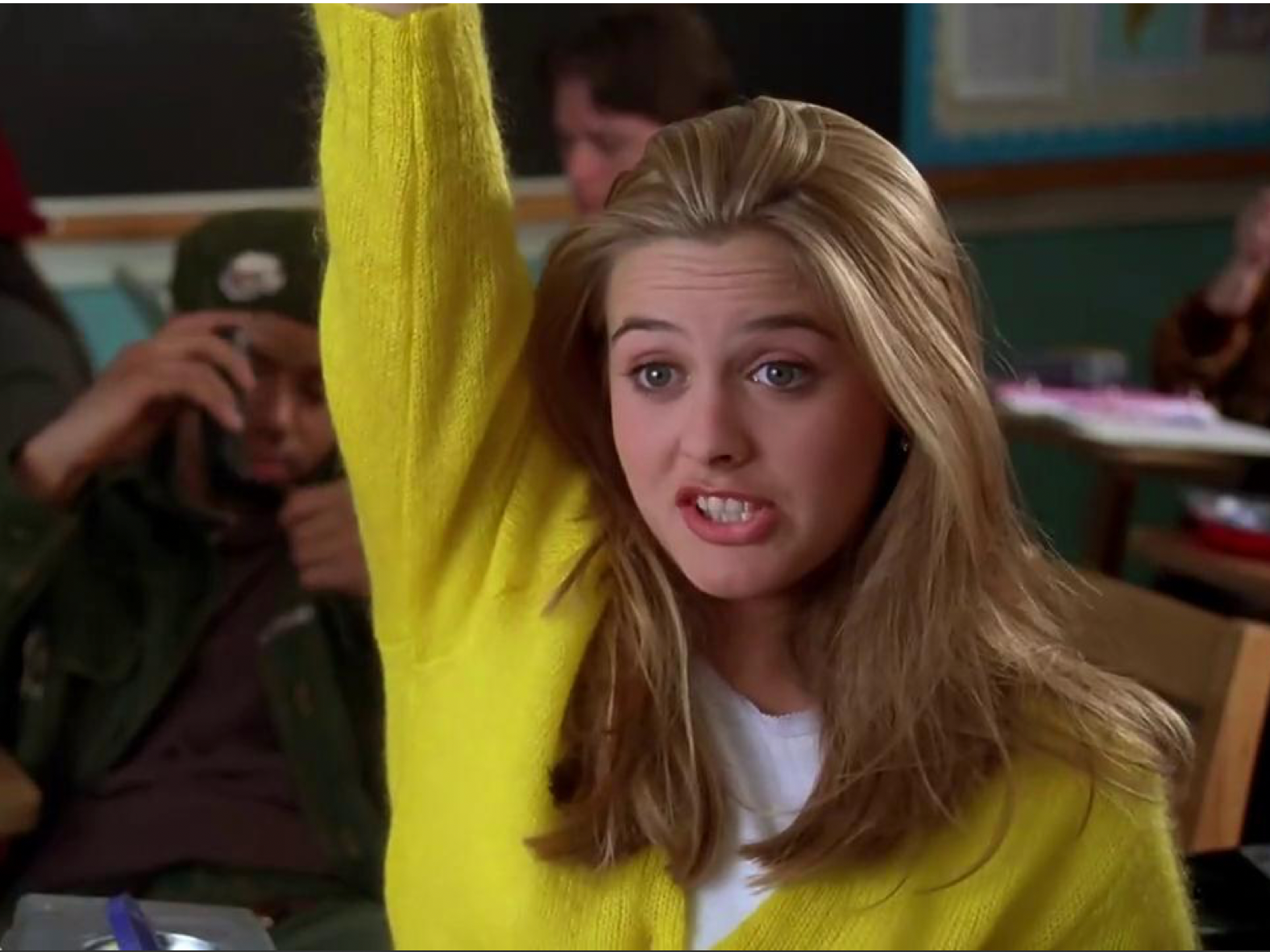 Today, the cult classic is known for its iconic 1990s style, slang, and pop-culture references.

Here are 11 surprising things you might not know about “Clueless.”

Silverstone’s performance in an Aerosmith music video helped her land the role of Cher. 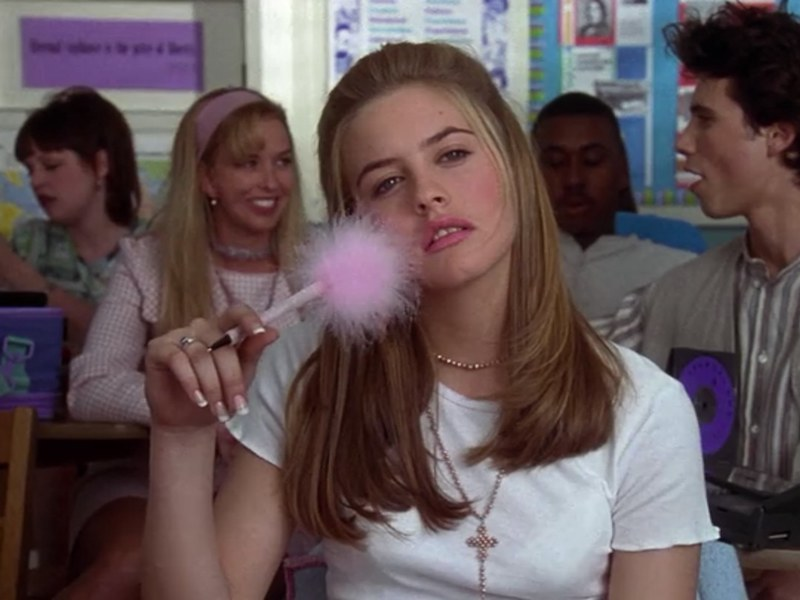 It’s hard to imagine anyone other than Silverstone in the role of Cher Horowitz, and it turns out, she was one of Heckerling’s top choices from the start.

According to Interview magazine, Heckerling said she had her eye on Silverstone thanks to her role in Aerosmith’s “Crazy” music video.

“Her performance in the video – I believed everything. I just went crazy for her. So when I handed the script in, by that time the ‘Crazy’ video was out and I videotaped it. I gave it to the studio and said, ‘Think of this girl when you read it,’ and they said ‘Oh, Liv Tyler?’ And I went, ‘No!'” she said.

She continued, “Meanwhile my friend, the casting director, was saying ‘You’ve got to see the girl in ‘The Crush.’ Well, it’s the same girl.”

The “This is an Alaïa!” mugging scene was based on a true story. 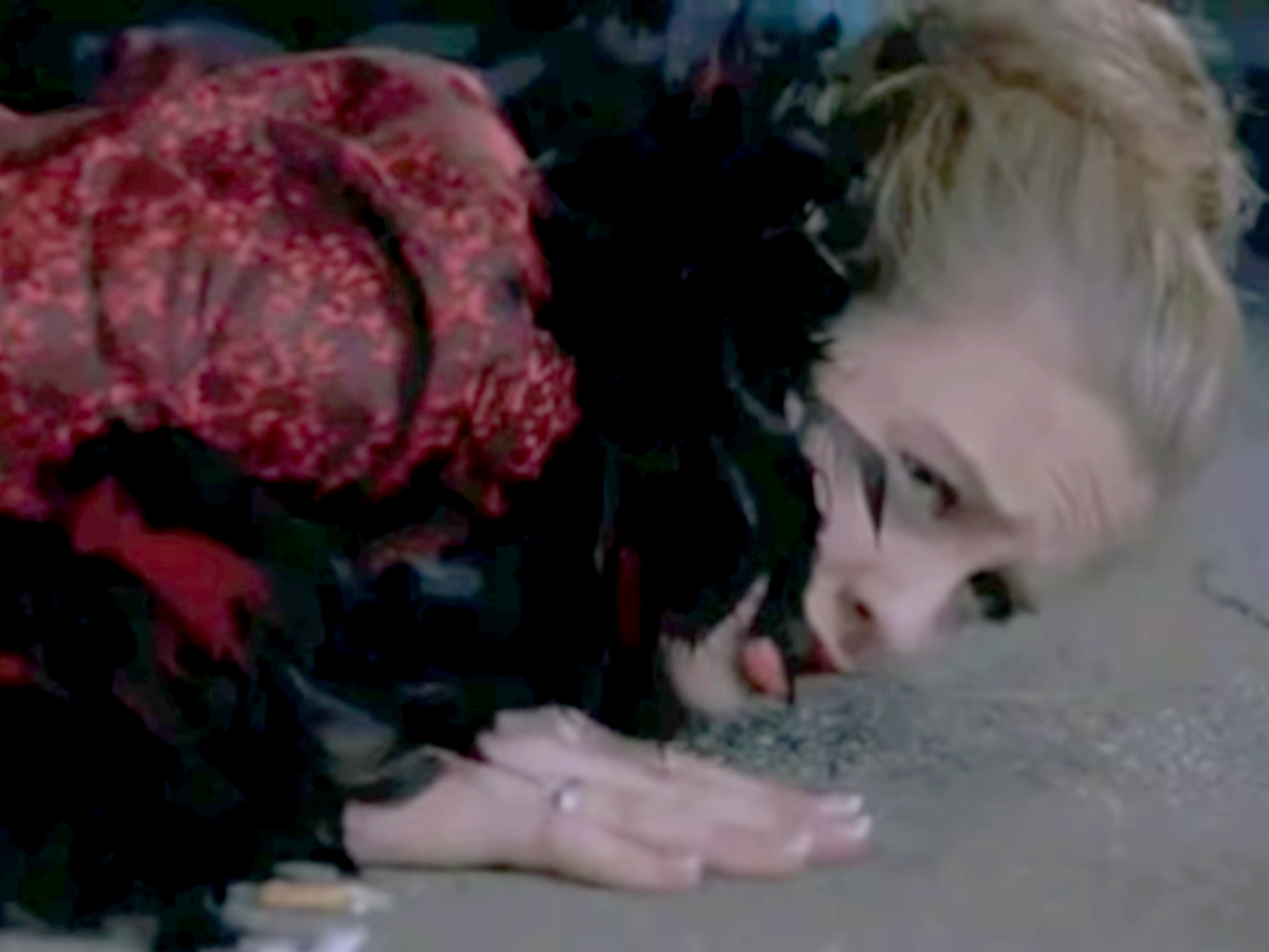 One of the most famous lines in “Clueless” is, “You don’t understand. This is an Alaïa!”

In the scene, Cher is being robbed at gunpoint, but when she is told by the mugger to get on the ground she protests because she doesn’t want to ruin her designer outfit.

According to Heckerling, the scene is based on a true story that she heard at a dinner party about a man whose wife made him start wearing designer suits.

“He got held up, and the mugger said, ‘Get on the ground!’ He said, ‘But this is Armani!’ It wasn’t like he loves Armani, it was more like he was more afraid of his wife than a guy with a gun,” Heckerling told Interview magazine in 2016. “I thought that was so hilarious!”

Cher’s speech wasn’t supposed to include the mispronunciation of “Haitians” — that was all Silverstone. 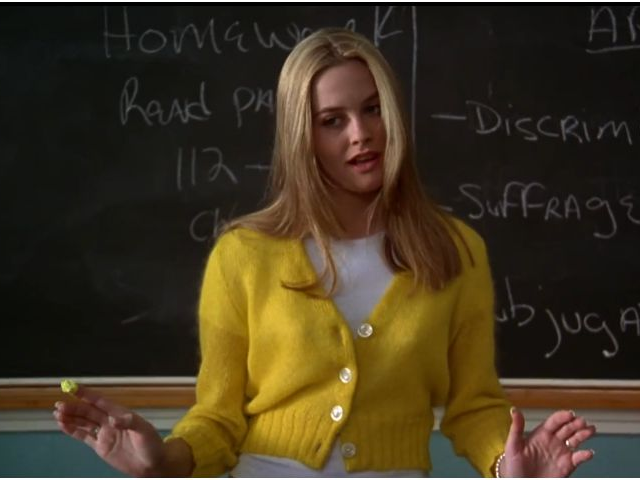 Another memorable moment in the film was when Cher mispronounced the word “Haitians” as “Hat-ee-ans” while giving a speech in debate class.

According to Heckerling, the mispronunciation wasn’t always meant to be in the film.

“It wasn’t written that way in the script, but that’s how [Silverstone] said it,” Heckerling told Vice in 2016. “Everybody started to run towards her to correct her and I had to kind of block them all, like ‘Step away from the actress!’ I didn’t want her to act; I just wanted her to feel that confidence.”

According to Heckerling, a major networked passed on the film, partly because of the romance between Cher and her stepbrother. 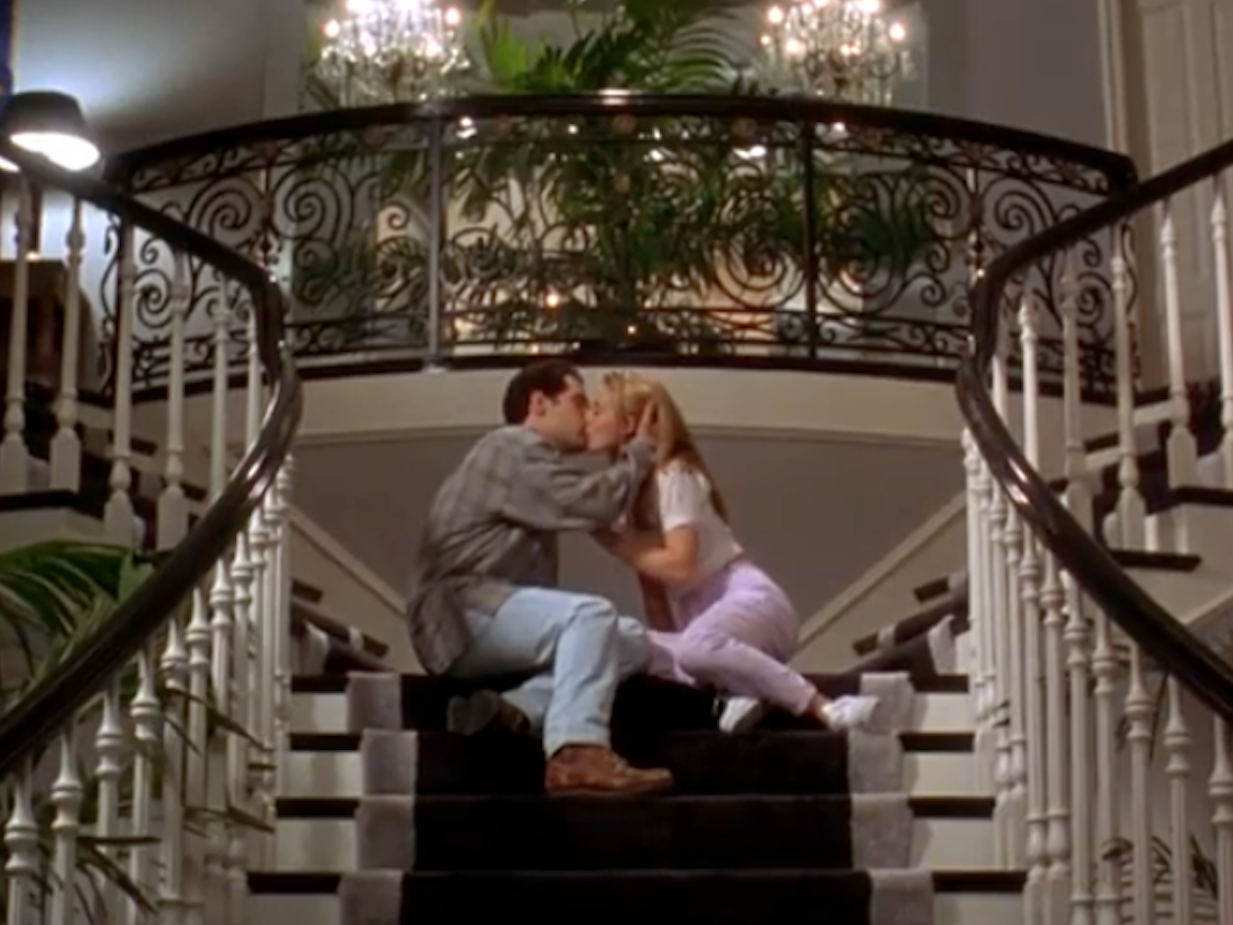 Paramount PicturesAmy Heckerling had a hard time getting ‘Clueless’ made.

Getting “Clueless” produced was more difficult than fans might expect.

According to the same Vice interview, Fox passed on making the film because they wanted it to focus more heavily on male characters, and the network apparently felt the romance between Cher and her stepbrother was inappropriate.

“That was so silly,” Heckerling told the publication. “[Fox was] going, ‘how can you have sex with your stepbrother?!’ And it’s like, they’re not related: Their parents were briefly married and [Cher’s] father is still nice to [Josh]. That’s not verboten, you know?”

After the film was picked up by Paramount, Heckerling said she told producer Scott Rudin about all of the things she’d taken out of the film to appease Fox, and he allowed her to put everything back into the script.

Heckerling was the inspiration for Tai’s “way harsh” insult. 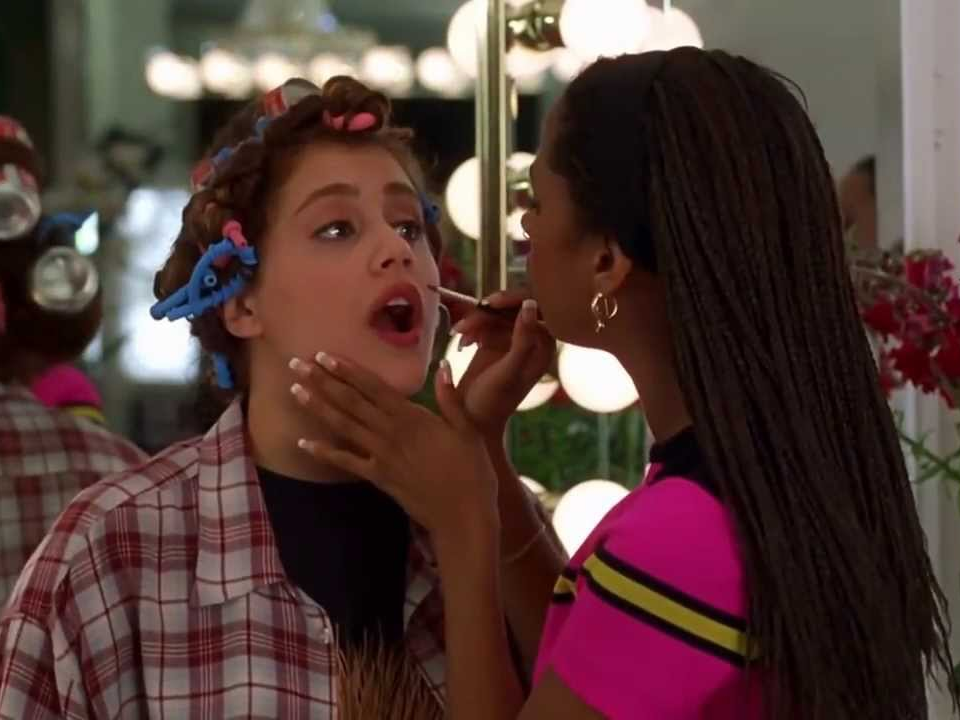 Another iconic line from the film, “You’re a virgin who can’t drive,” was inspired by Heckerling’s teen years.

According to Vice, Cher’s virgin status and repeated failed driving tests were based on Heckerling’s real life, so it was easy for the director to craft the perfect insult from Tai (played by Brittany Murphy).

“‘You’re a virgin who can’t drive.’ Well, that was me! For a very long time.” Heckerling explained. “You take the thing that embarrassed you most, and you use it.”

Heckerling also used her own fear of driving as inspiration for Dionne’s freeway scare. 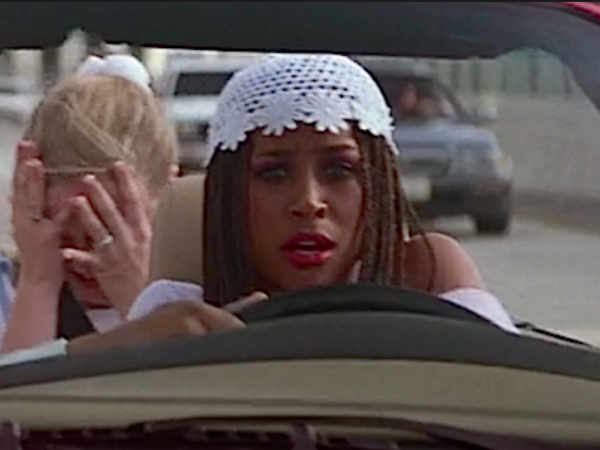 In a 2017 interview with The Daily Beast, Heckerling explained that she used her own fear of driving as inspiration for the freeway scene in “Clueless.”

“I’ve always had a fear of [driving]. So a couple of times in my life I wind up in the lane you can’t get out of, and you’re on the freeway for like one exit, and I pretty much scream the whole way,” she said. “In LA it’s like a physical handicap. I wanted to make fun of that, of how I feel when that happens.”

Silverstone got to keep all of her outfits from the film — but she apparently gave most of them away. 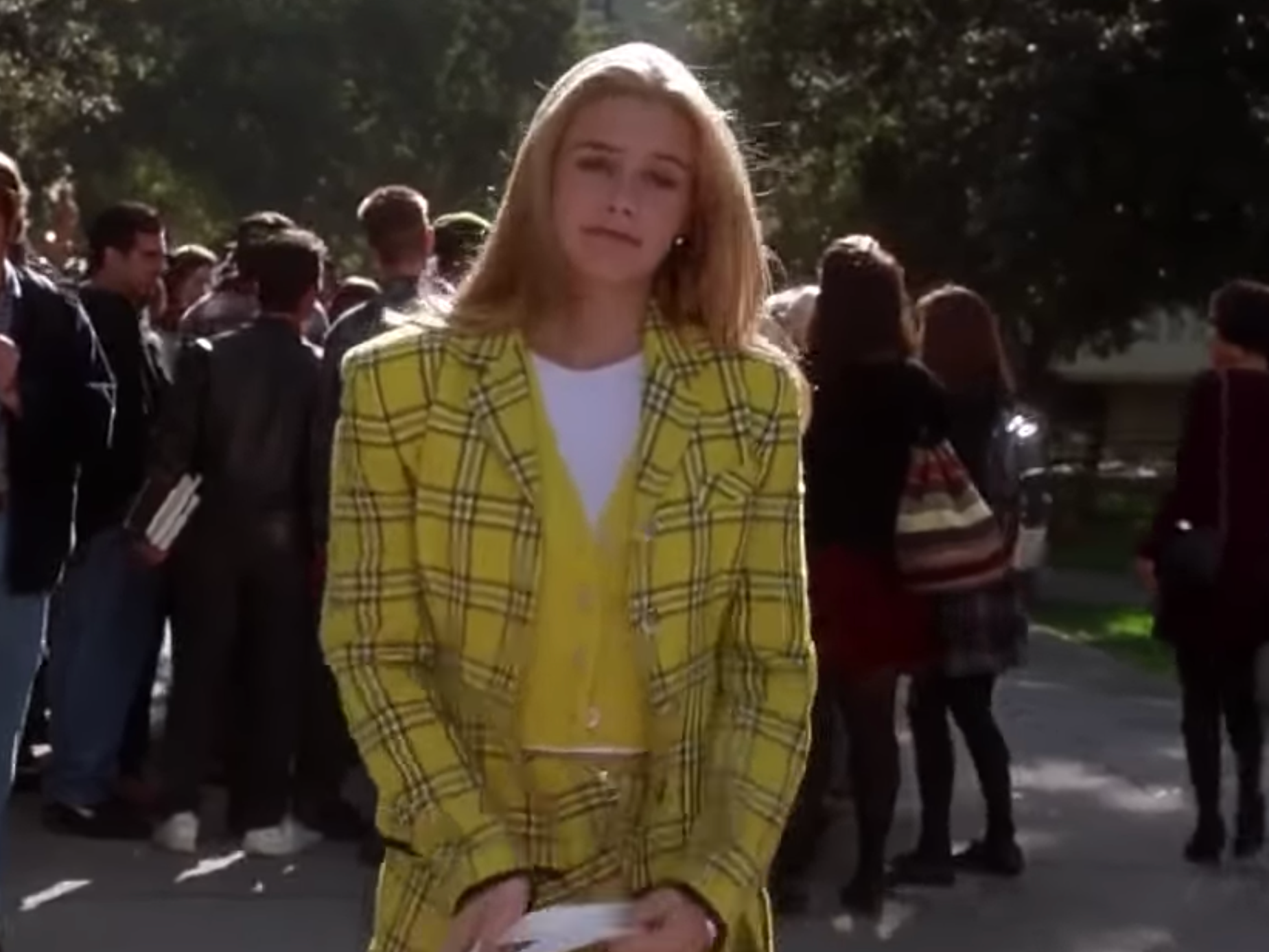 According to “As If!: The Oral History of Clueless” by Jen Chaney, which celebrated the film’s 20th anniversary, Silverstone got to take home all of Cher’s outfits from the film, including the iconic, yellow plaid Jean Paul Gaultier ensemble.

However, according to Bustle, Silverstone told Chaney that she doesn’t have all of them.

“I didn’t do a very good job at saving any of them,” Silverstone said. “I was stupid about that whole thing. I think I gave them all away.”

Some of the wardrobe items in the movie are from thrift stores. 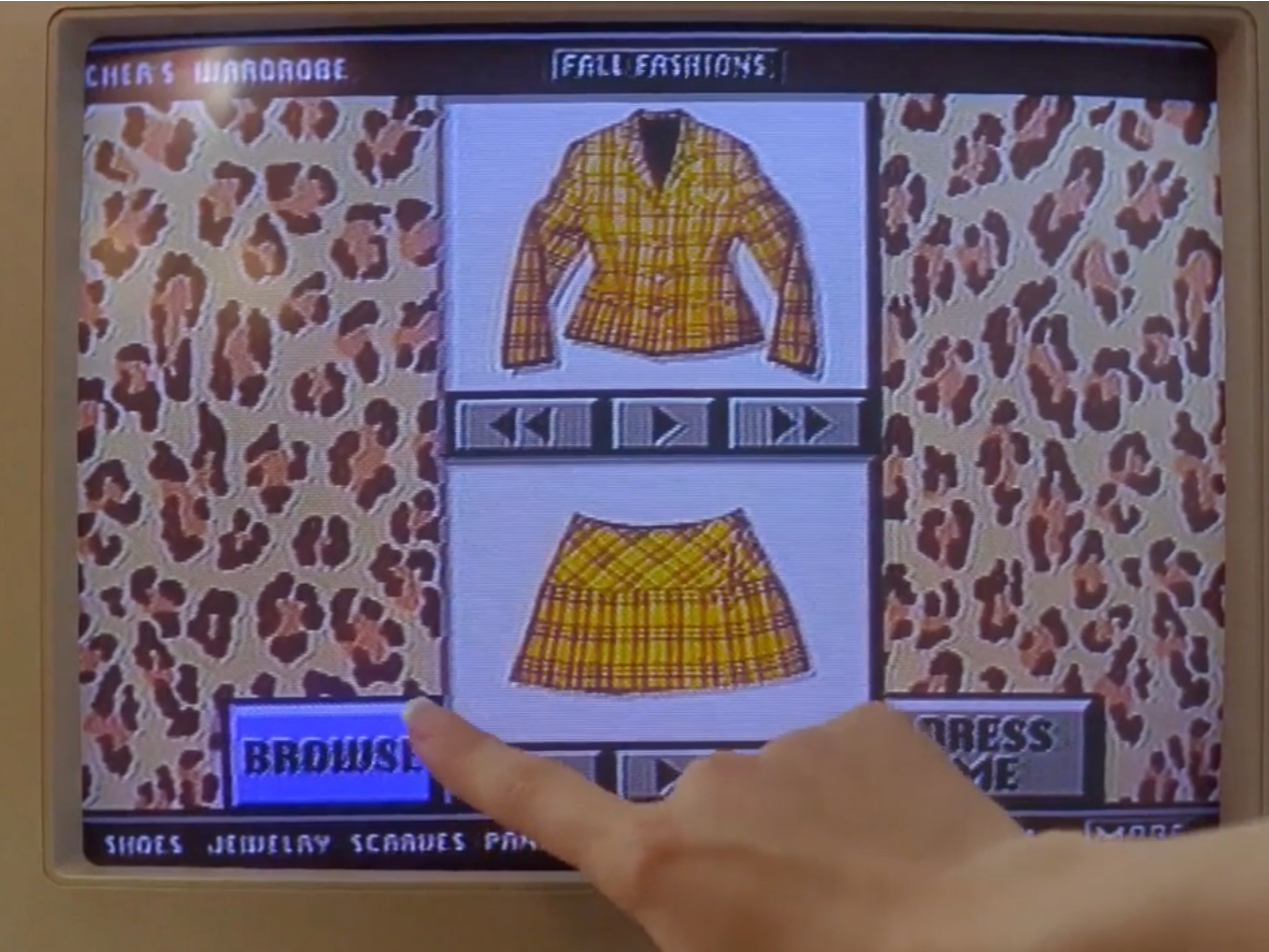 In “As If!: The Oral History of Clueless,” costume designer Mona May said that there were 63 outfit changes for Cher, but she only had $US200,000 to spend on the wardrobe for the entire film.

Paul Rudd gave a nod to his alma mater in the film. 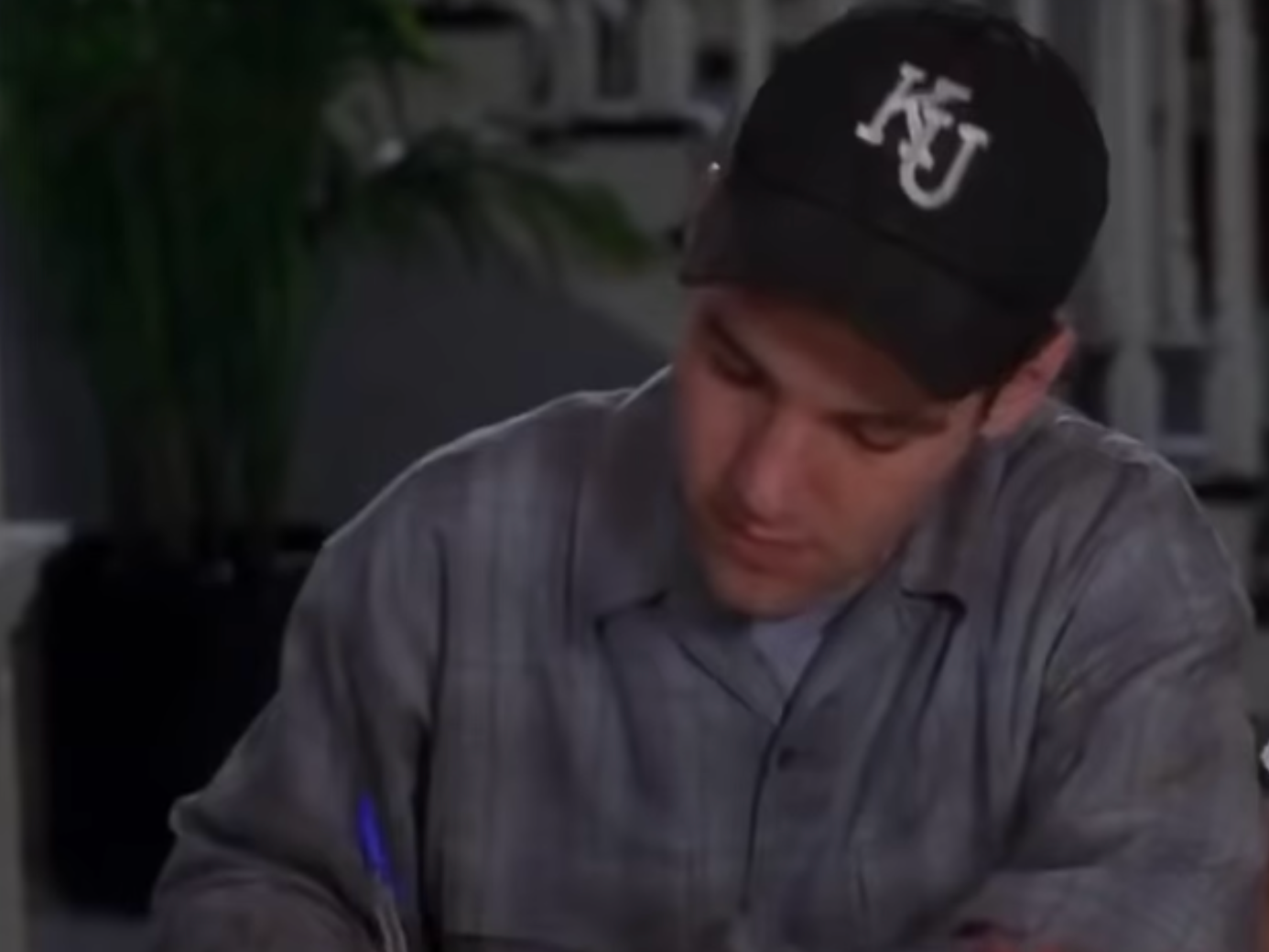 Paul Rudd played Cher’s stepbrother, Josh, in the film, and it turns out he made a few suggestions to May for his wardrobe.

Rudd is a graduate of the University of Kansas, and according to an interview with Big Slick Kansas City, he asked the “Clueless” costuming team if he could wear his own KU hat for a few scenes.

The actor said he gave his hat to the wardrobe department to hold onto, but he hasn’t seen it since the film wrapped.

According to Heckerling, the slang from the film came from a variety of people. 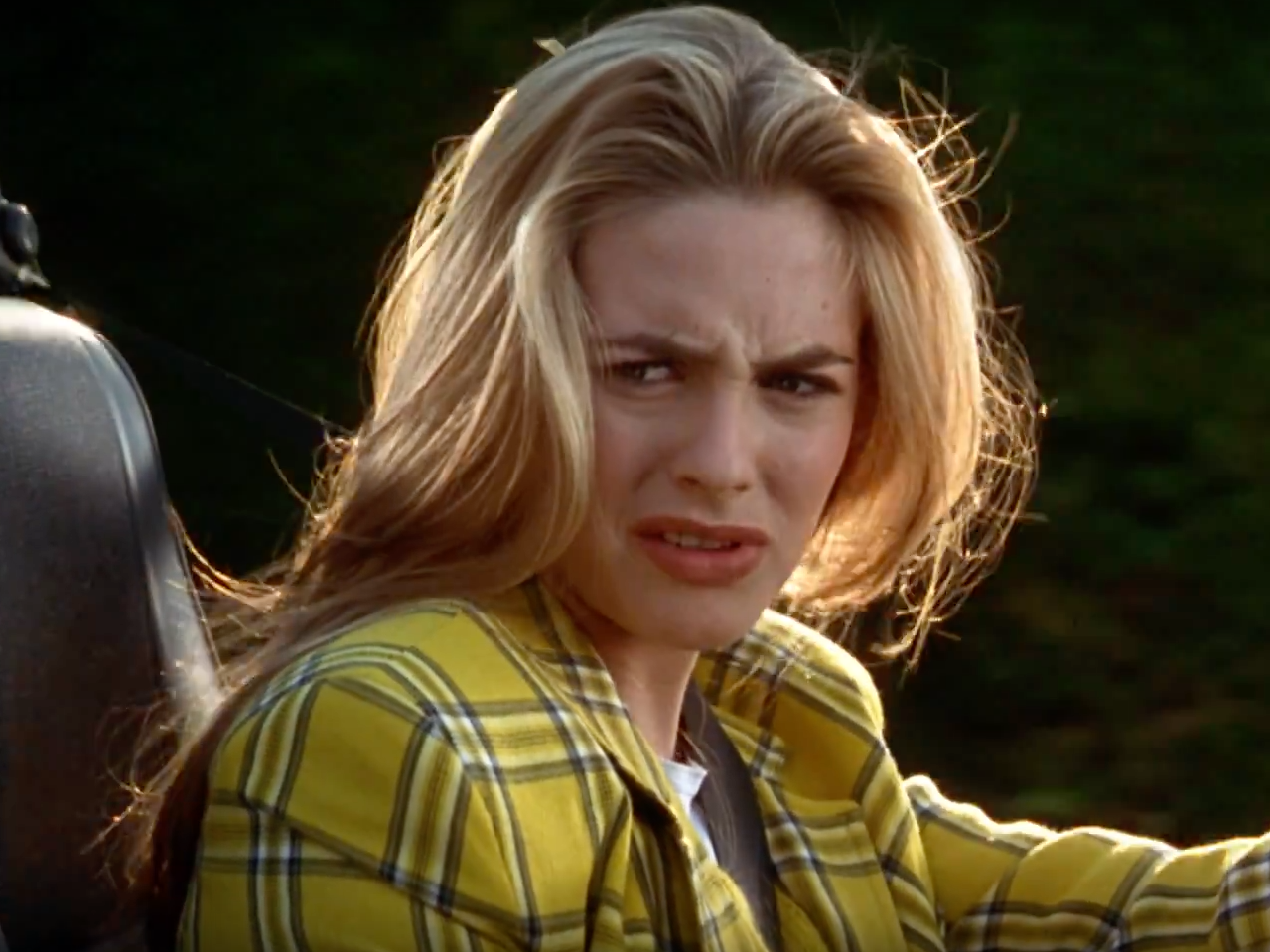 ParamountThere is a lot of iconic slang in the film.

The film’s iconic vocabulary – “As if!” “Total Baldwin,” “Whatever!” – has a few different roots.

“I am always compiling slang words because I am just interested in how people use language,” Heckerling told The Hollywood Reporter in 2016. For example, she credited the memorable phrase “As if” to LGBTQ communities of the early 1990s.

She told Entertainment Weekly in 2012 that she asked the actors who auditioned for the film for their ideas, too.

“That’s where I got ‘going postal,'” she said, speaking of the casting process. “I loved calling someone a ‘Monet.’ From far away they’re f—ing gorgeous and up close they’re totally different.”

Heckerling observed students at Beverly Hills High School to get inspiration for her characters. 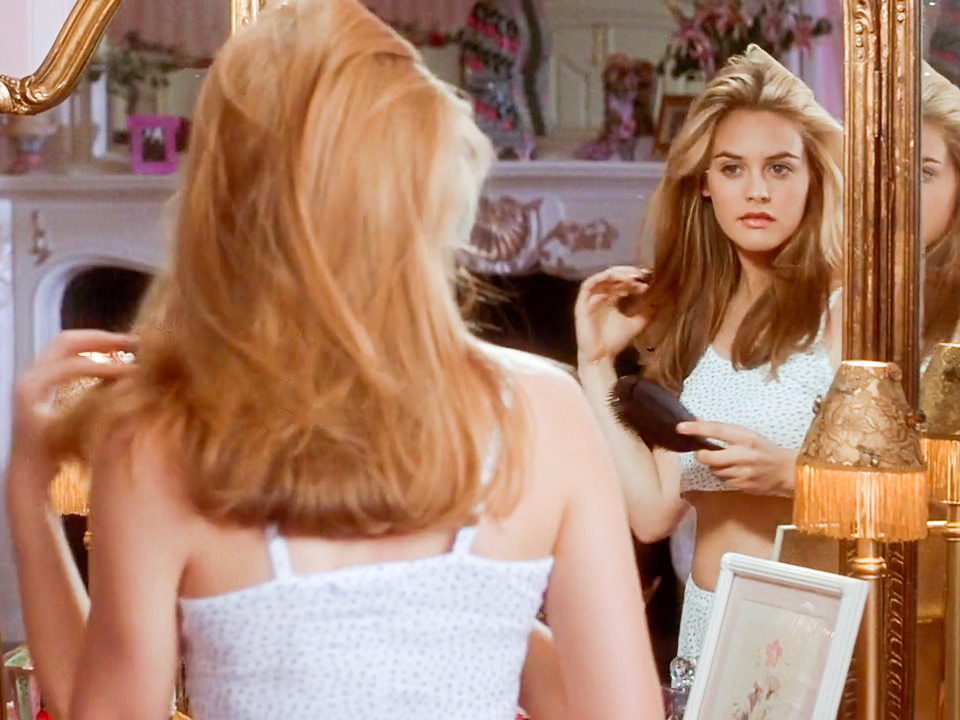 As a writer and director who gets tons of ideas from real life, Heckerling made sure to get inspiration for her Beverly Hills characters by going straight to the source.

“I knew it would be set in Beverly Hills because it’s a hyper-pastel fantasy place,” Heckerling said of “Clueless” in the same Entertainment Weekly interview. “I hung out at Beverly Hills High School for research. And the one thing I observed was these girls in a constant state of grooming.”