13 things you probably didn't know about 'She's the Man' 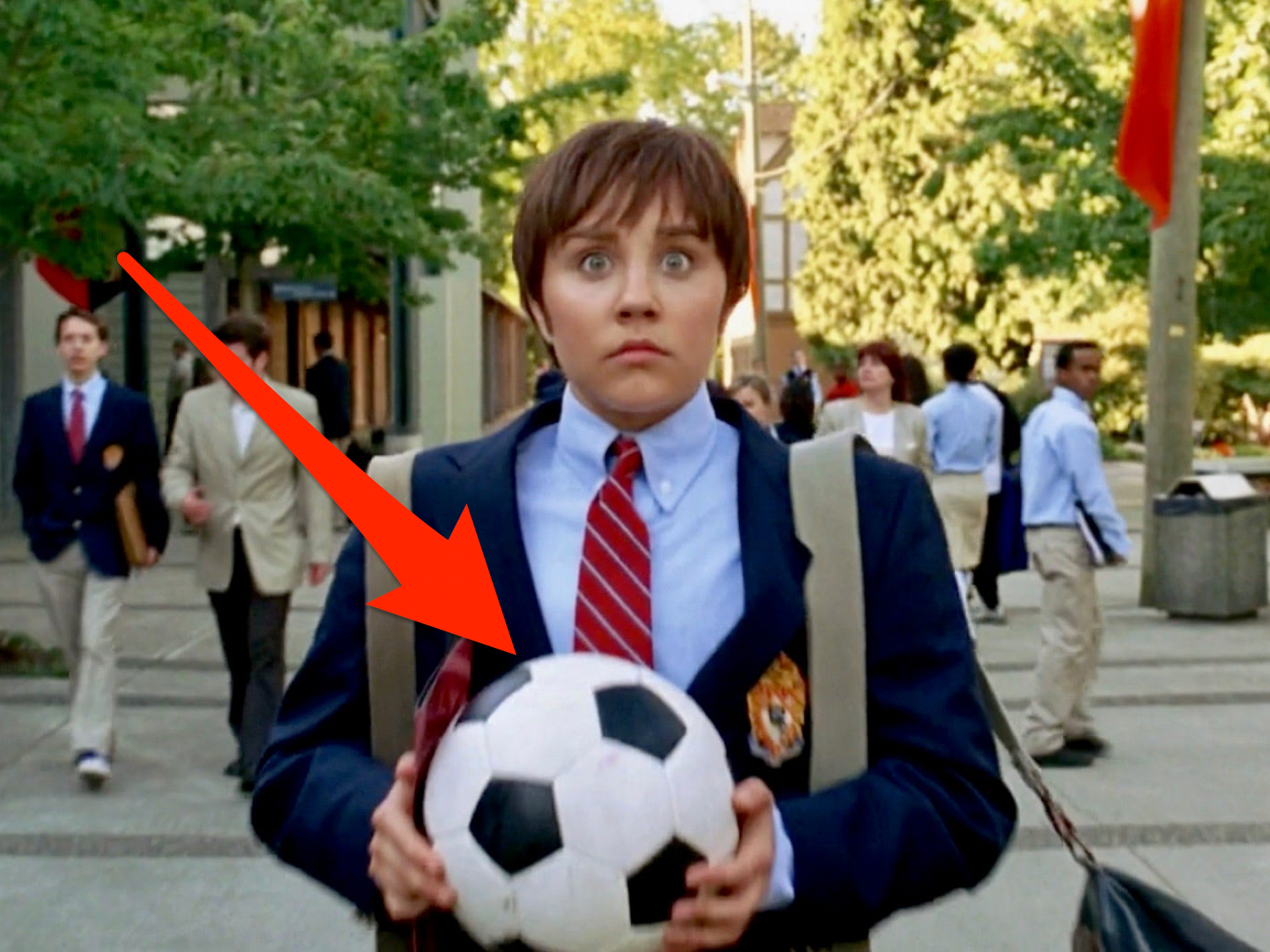 DreamWorksAmanda Bynes had to learn how to play soccer for the film.

“She’s the Man” (2006) is a classic rom-com starring Amanda Bynes and Channing Tatum that follows a group of students entangled in the drama of teenage romance.

And although you may have watched the movie a number of times, there are a few interesting facts and behind-the-scenes secrets you might not know.

Here are some fun facts about “She’s the Man.”

To prepare for filming, Bynes and the film’s director Andy Fickman went to a shopping mall to observe male behaviour. 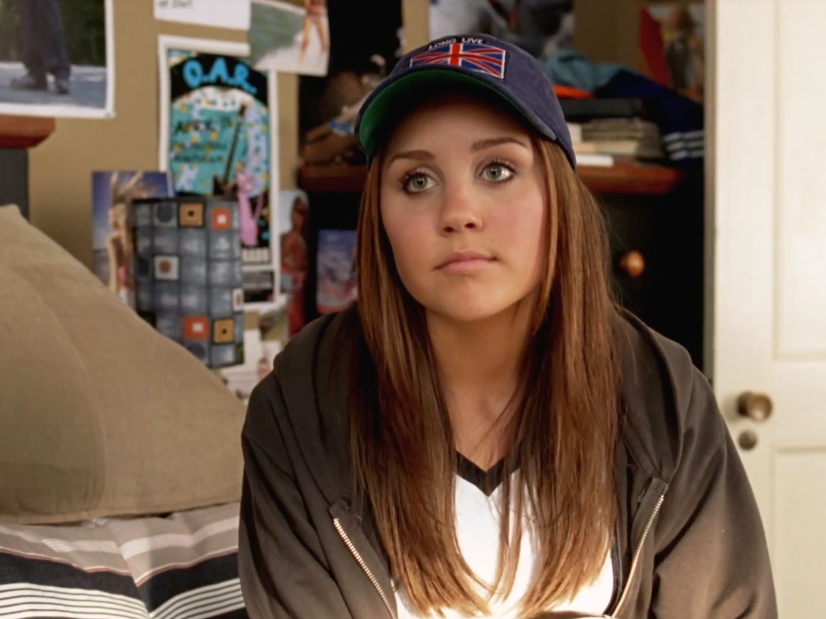 DreamWorksAmanda Bynes said she took notes on how guys and girls acted together.

Throughout the film, Bynes’ character Viola pretends to be her brother Sebastian, so when she was first cast, she was tasked with learning how to act like a guy.

To prepare for the role, she and director Andy Fickman went to a shopping mall to observe how men and women interacted.

Bynes said it was difficult for her to play Sebastian. 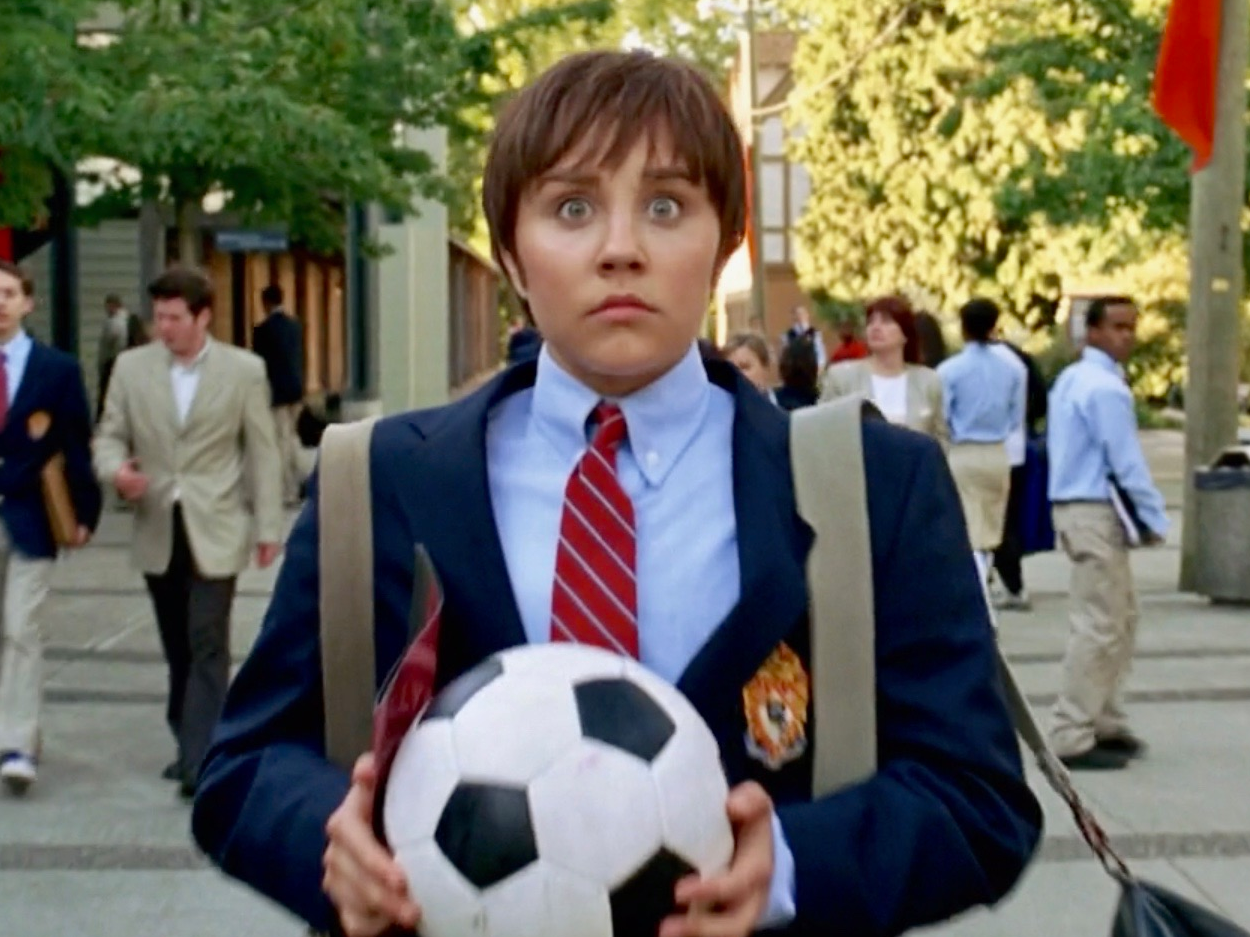 DreamWorksAmanda Bynes said she had fun doing the role but she ‘likes being a girl.’

In a 2006 interview with MSN, Bynes said she knew she could do character work based on her time on “The Amanda Show,” but pretending to be Sebastian was difficult for her because she felt awkward in the role.

On stepping into a male role, Bynes said, “It was hard, but I did it and I did something that was not easy for me – so it was a cathartic experience and I felt really good getting it out of me.”

In 2018, Bynes told Paper magazine that watching herself acting as a boy sent her “into a deep depression” because she didn’t like the way she looked.

“It just really put me into a funk,” she said.

“She’s the Man” is based on a Shakespearean play. 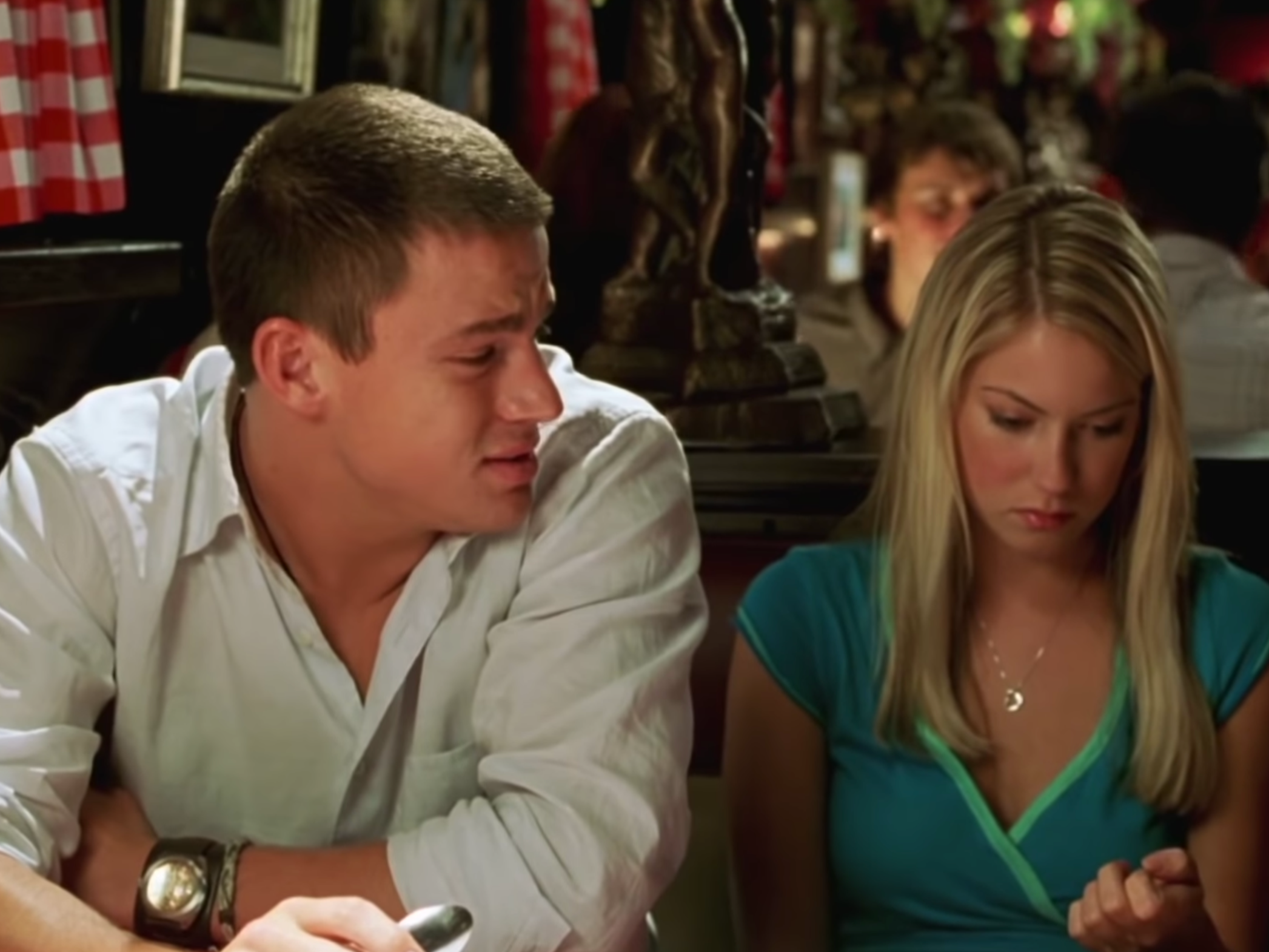 DreamWorksA lot of the names in the movie are from the play.

“She’s the Man” is a modern adaptation of William Shakespeare’s “Twelfth Night.”

The film uses a few character names from the play, like Viola, Olivia, and Sebastian. The movie also has themes similar to those found in the play, like changing identities and unrequited love.

“She’s the Man” even pays tribute to smaller characters in the Shakespearean work. For example, in the play, Malvolio is another man who loves Olivia but in the movie, it is the name of one character’s pet spider.

Bynes said she “fought” for Channing Tatum to be cast in the movie. 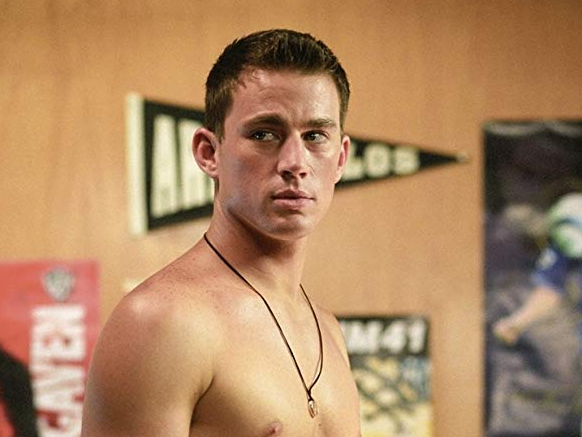 In the 2018 interview with Paper magazine, Bynes said she had pushed for Tatum to be in the film.

“I totally fought for Channing [to get cast in] that movie because he wasn’t famous yet,” she said. “He’d just done a Mountain Dew commercial and I was like, ‘This guy’s a star – every girl will love him!’ But [the producers] were like, ‘He’s so much older than all of you!’ And I was like, ‘It doesn’t matter! Trust me!'”

In a deleted scene, Viola gets revenge on her ex-boyfriend Justin. 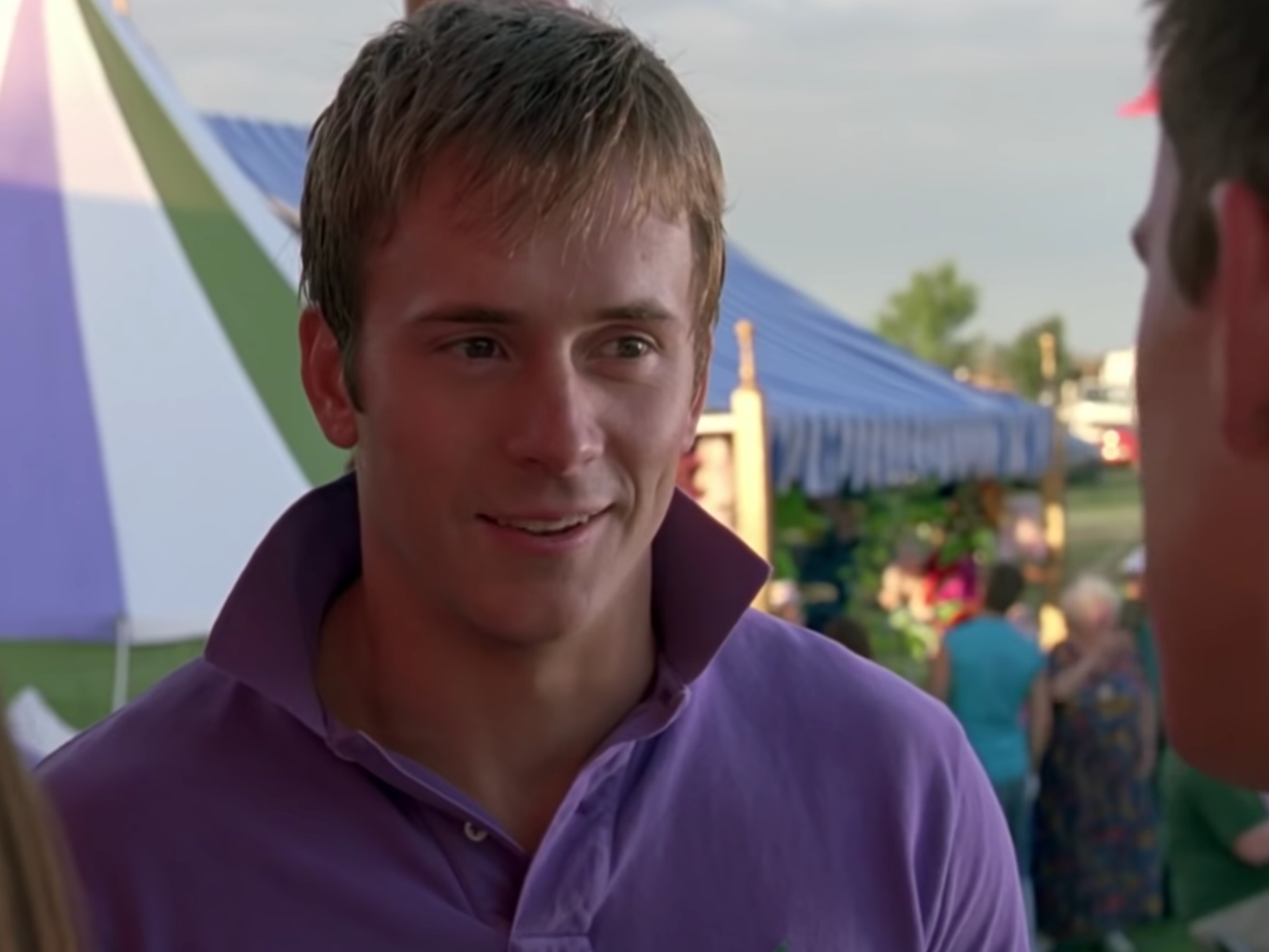 On the film’s DVD, viewers can watch a deleted scene in which Viola, dressed as Sebastian, gets revenge on her ex, Justin. In the scene, Viola kicks a soccer ball at a target and Justin gets submerged in a dunk tank.

Bynes said she wasn’t very skilled at soccer before taking on the role. 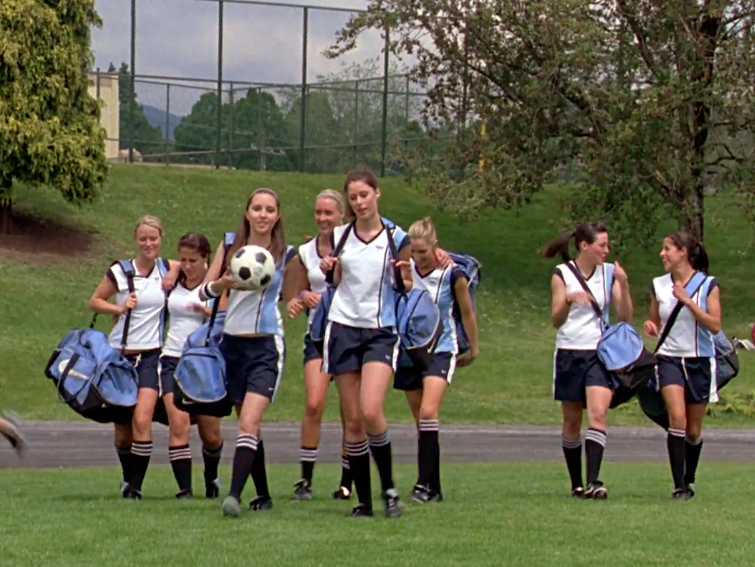 According to a behind-the-scenes interview, Bynes and Tatum trained for multiple hours each day to prepare for their roles as soccer players.

Bynes said she wasn’t really skilled at soccer before filming began, but the on-set coach said he was impressed with how quickly she was able to catch on.

The actresses in the bathroom fight scene did some of their own stunts. 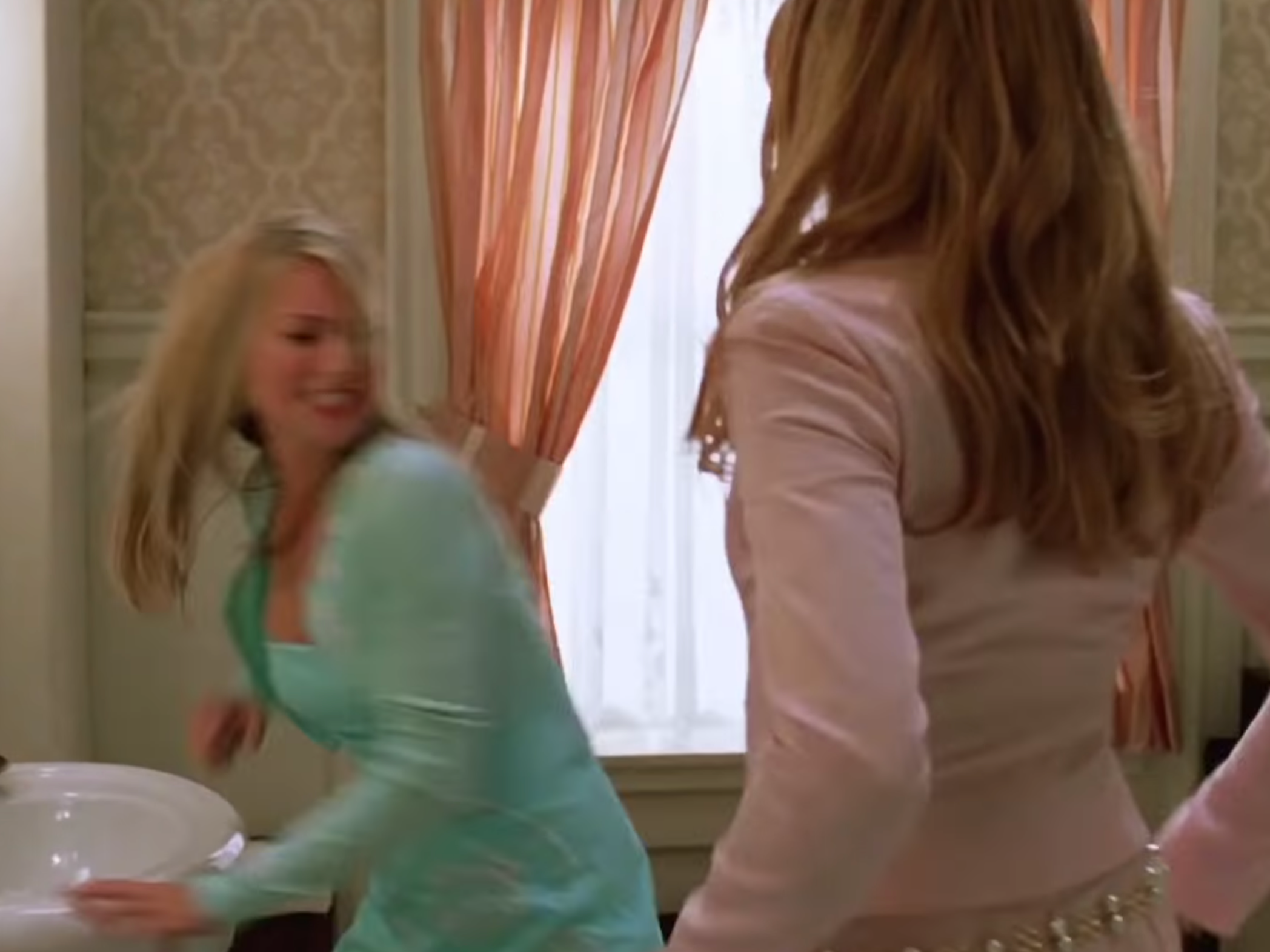 DreamWorksThe fight is between the characters Viola, Olivia, and Monique.

In one scene, Viola, Olivia, and Monique get into a physical fight in the bathroom of a country club. And although the three women had stunt doubles, the actors learned from them and did a lot of the stunts themselves.

“As much as we had our three wonderful stunt actresses there, too, when you see the cut of the movie, it’s a lot of our girls pounding each other,” Fickman said in a behind-the-scenes interview.

Bynes also said she and the other actresses were “so excited to physically fight each other.”

Tatum shoved a tampon applicator up his nose during his audition. 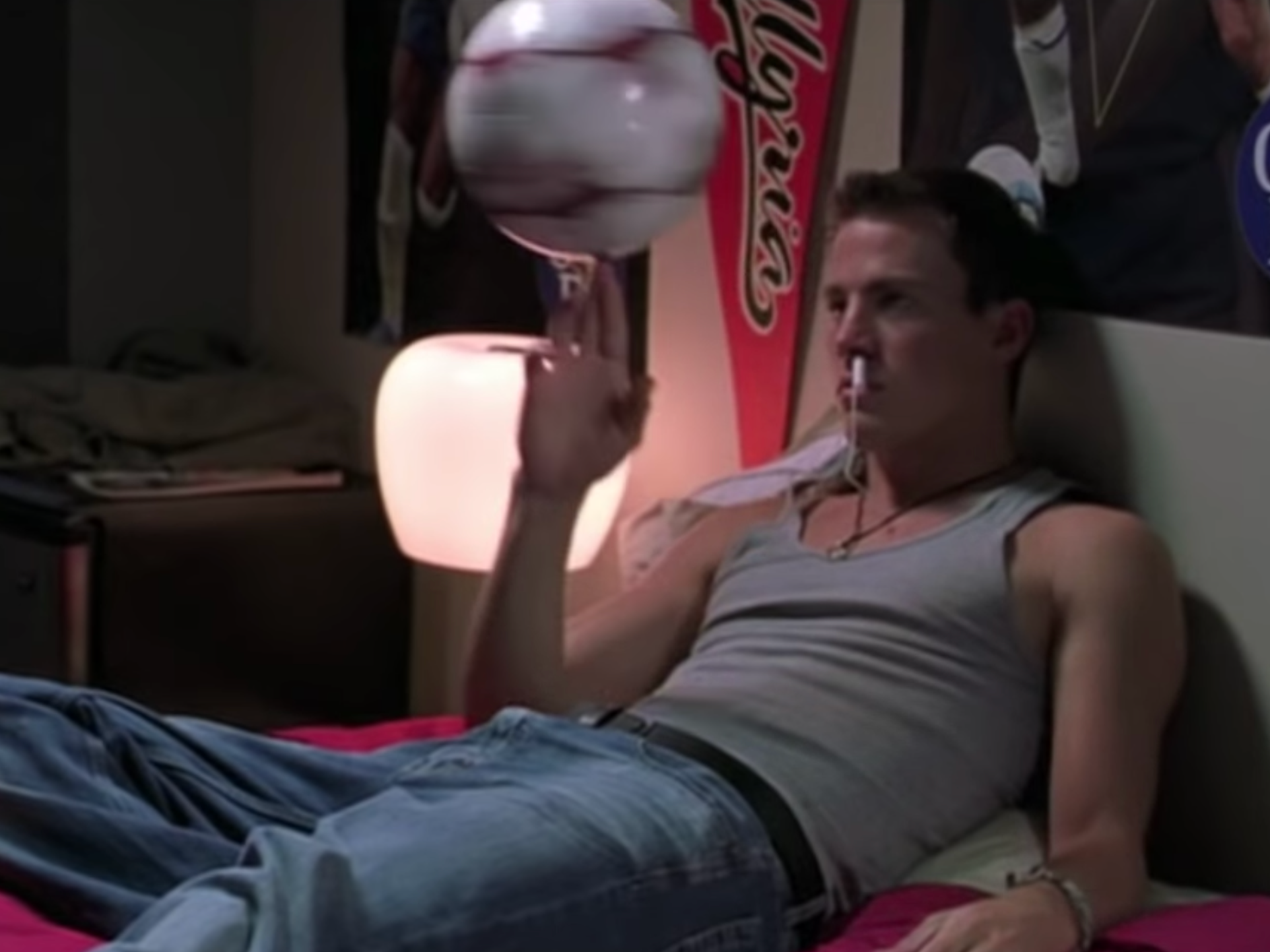 DreamWorksChanning Tatum in ‘She’s the Man.’

In the film, Tatum’s character Duke finds a box of tampons in Sebastian’s bag. To keep up the charade, Viola (as Sebastian) shoves the tampon up her nose, claiming they are a handy way to deal with bad nosebleeds.

Later in the film, viewers see Duke using a tampon to stop a nosebleed.

In a 2007 interview with iFilm, Bynes said that during his audition, Tatum didn’t know he was supposed to take off the plastic applicator, so he stuck the entire tampon up his nose.

Bynes said her transformation into Sebastian included sideburns and a muscle suit. 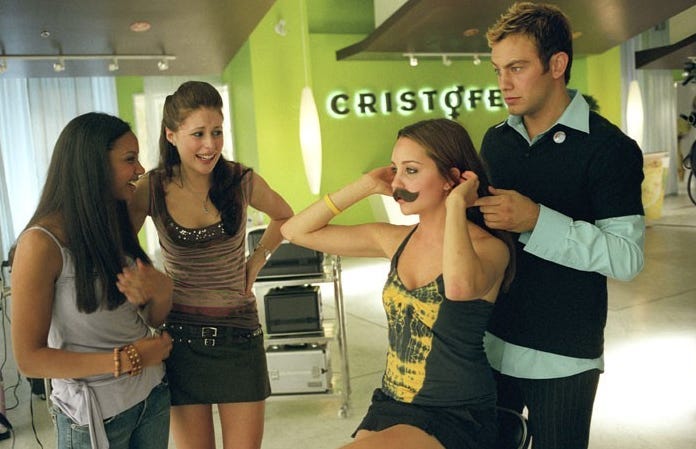 DreamWorks StudiosAmanda Bynes said she wore about four layers of clothing when she played Sebastian.

Going from Viola to Sebastian throughout the filming process required some difficult costuming. In scenes when she played Sebastian, Bynes said she wore adhesive sideburns and eyebrows, chest binding, a muscle suit, and four layers of clothing. Evan Agostini/APJesse McCartney was a rising musician when ‘She’s The Man’ was filmed.

In a 2006 interview with MTV, Bynes said the producers tried to get pop singer Jesse McCartney to play Sebastian since they thought he looked similar to her, but she said McCartney was busy at the time.

Producers ended up casting actor James Kirk, who Bynes said “had oddly similar features” to her.

The movie’s screenwriter, Karen McCullah, has written for many popular films. 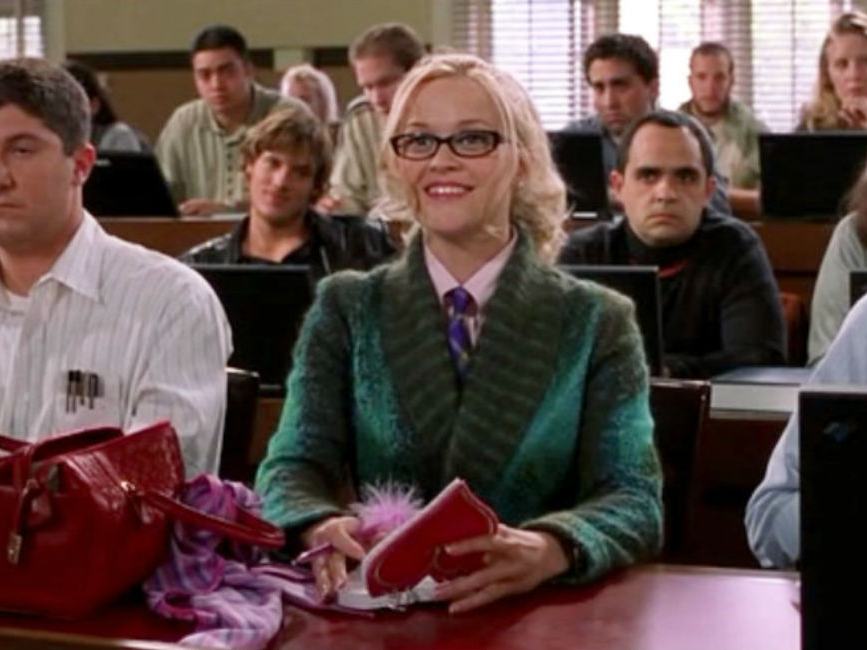 Tatum improvised some of his scenes in the film. 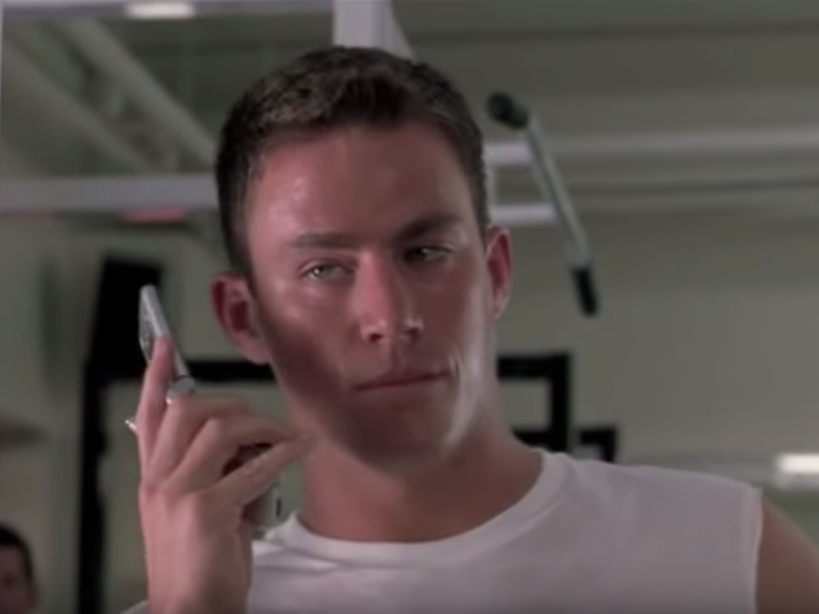 DreamWorksThe actors were encouraged to make each other laugh on set.

In a 2007 interview with iFilm, Tatum said that the film’s director created an environment in which the actors were encouraged to make each other laugh.

Because of this, Tatum ad-libbed some of his scenes – including the scene at the gym where he takes a call on his flip phone while he’s trying to flirt with Olivia.

In the shower scene, Tatum actually hit actor James Snyder with his towel. 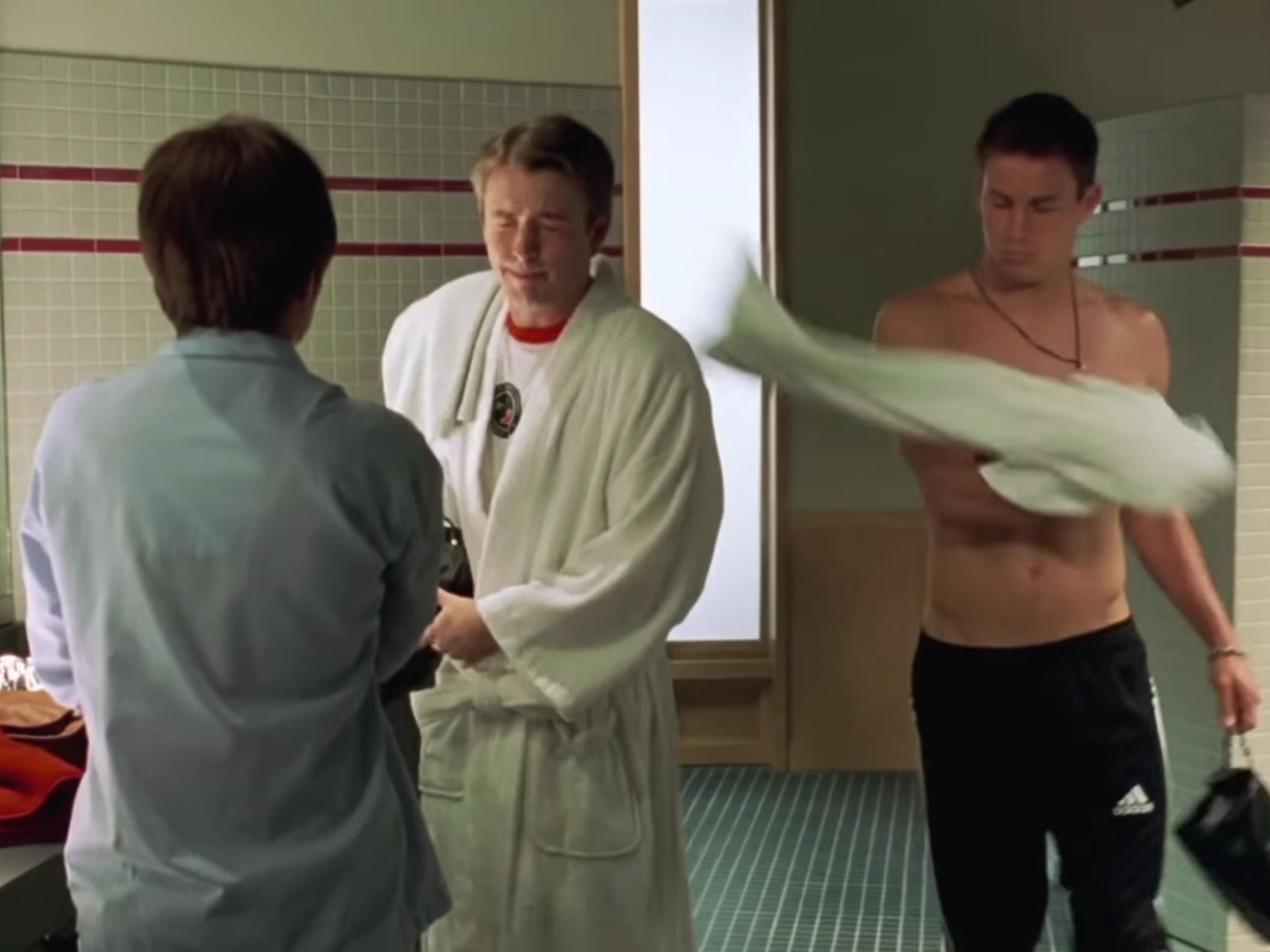 DreamWorksJames Snyder said he got hit in the eye.

At one point in the movie, Duke (Tatum) snaps a towel at Malcolm (James Snyder) in the locker room. In 2014, Snyder shared on Twitter that the towel actually hit him in the eye, so his pained reaction was genuine.