Conor McGregor would get 'knocked out pretty quick' by Manny Pacquiao, the boxer's former promoter says 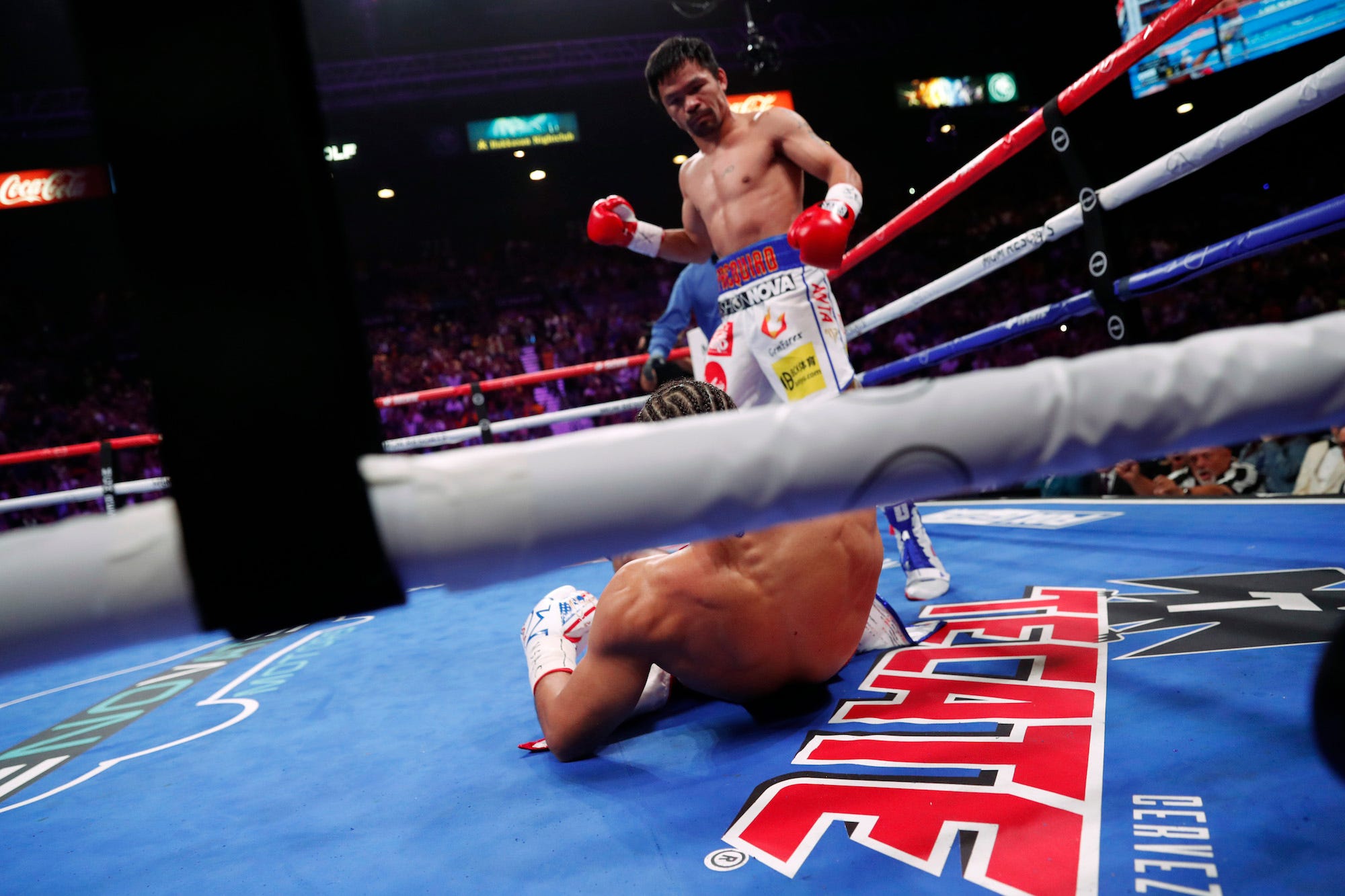 Photo by Steve Marcus/Getty ImagesManny Pacquiao dropped his most recent opponent Keith Thurman in the first round of their 2019 bout.

LAS VEGAS – Conor McGregor would get “knocked out pretty quick” if he ever fought Manny Pacquiao in a boxing-rules contest.

That is the opinion of Pacquiao’s former promoter, the Top Rank founder Bob Arum, who says he is not at all intrigued at the prospect of McGregor returning to the ring.

McGregor, a wildly successful mixed martial artist, last fought a boxing match in 2017 when he was stopped on his feet in the 10th round of a landmark showdown against Floyd Mayweather.

“Mayweather played with him, that was a joke,” Arum told Business Insider. “Pacquiao doesn’t know how to play. So McGregor is getting knocked out pretty quick. Pacquiao couldn’t play the way Mayweather did.”

Regardless of McGregor’s losing record, there has been talk of him boxing again.

It all began during the build-up to McGregor’s comeback at UFC 246 in January, just days before he annihilated Donald “Cowboy” Cerrone in 40 seconds.

In January, McGregor said he had been in talks to box Pacquiao. “With Manny Pacquiao, talks have been ongoing,” McGregor said.

Pacquiao’s manager Sean Gibbons later added that McGregor knew where to go if he wanted “a proper fight,” one which Business Insider was told by combat sports expert Gareth A. Davies could generate $US250 million.

“It has been a great day for Paradigm,” the agency’s founder and CEO Audie Attar told Business Insider earlier this month.

The signing raised speculation a fight between the pair could now be made easier.

A Pacquiao vs. McGregor bout could polarize the industry

Should a boxing rules contest between the former eight-weight world champion boxer Pacquiao and the former two-weight UFC champion McGregor materialise, it could polarize the industry.

The British fight promoter Frank Warren said: “I don’t think any UFC fighter would beat a boxer. I don’t think that will happen, at all, any of them. That’s my opinion. Conor McGregor’s loss to Mayweather showed that.”

But the head of boxing at Sky Sports, Adam Smith, told us that the broadcaster “had a lot of fun” airing the Mayweather and McGregor event, and that it is possible a Pacquiao and McGregor fight would be a similar success at the box office. 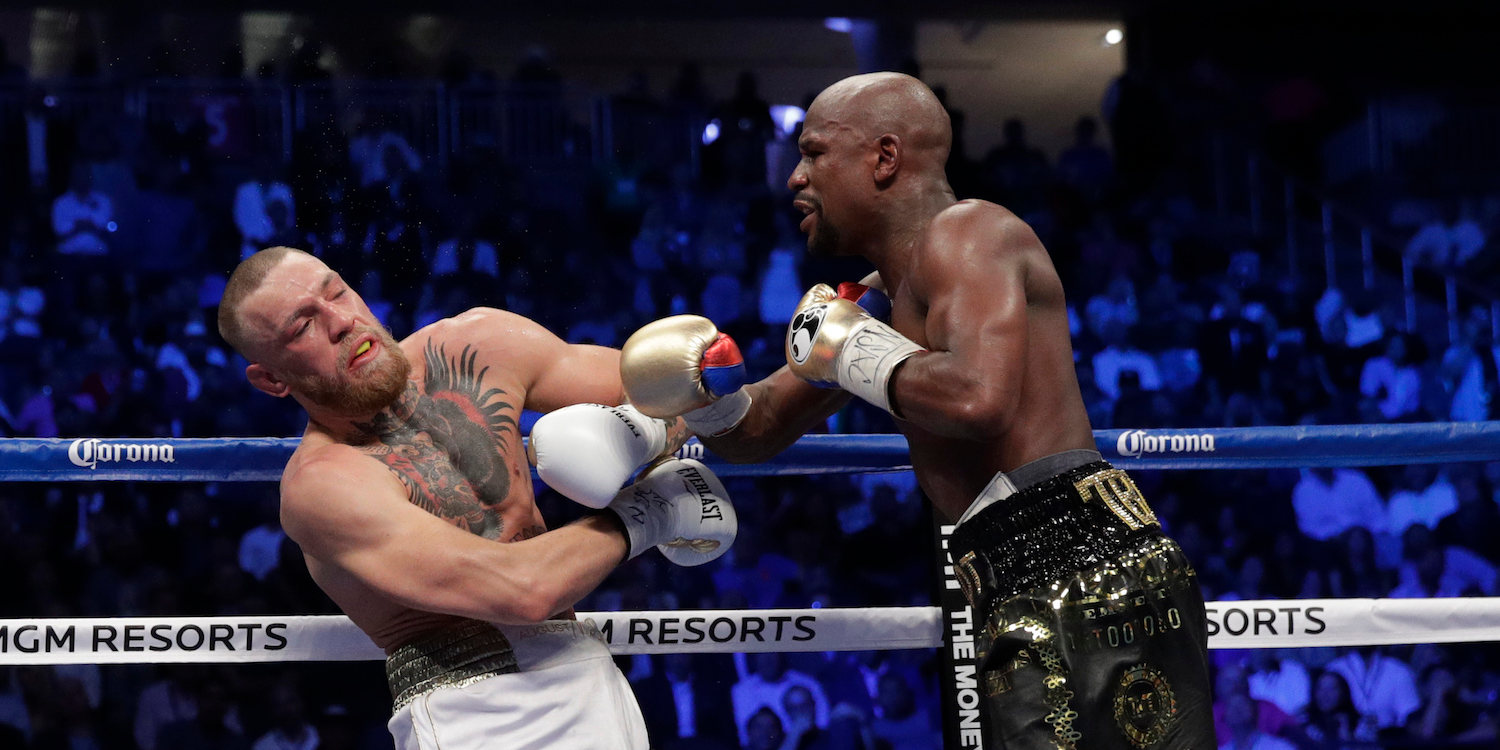 Isaac Brekken/APConor McGregor was finished in the 10th round of his sole boxing rules contest against Floyd Mayweather in 2017.

“Ultimately we knew what was probably going to happen,” Smith said.

“Floyd was never really in any danger in the ring, but what a great cross of styles and of two different audiences. I saw it as a fun event. I enjoyed working on it.

“Conor McGregor was the most entertaining guy I’d ever been around since Naseem Hamed. Floyd was the best fighter since Sugar Ray Leonard. You were never going to beat Floyd in a boxing ring, and I never bought into Conor McGregor actually having a chance of winning.

“I did buy into the fact that this was entertainment, fantastic, and that everyone loved it. We did really good business.”

On whether Smith would envisage a similar number of customers buying Pacquiao vs. McGregor should that fight happen, he said: “Possibly yes. If Pacquiao fights McGregor there’s an interest in that. We’re always looking at different things and changing up the model, but ultimately we’re covering the best boxing at Sky Sports and that’s the most important thing for us.”