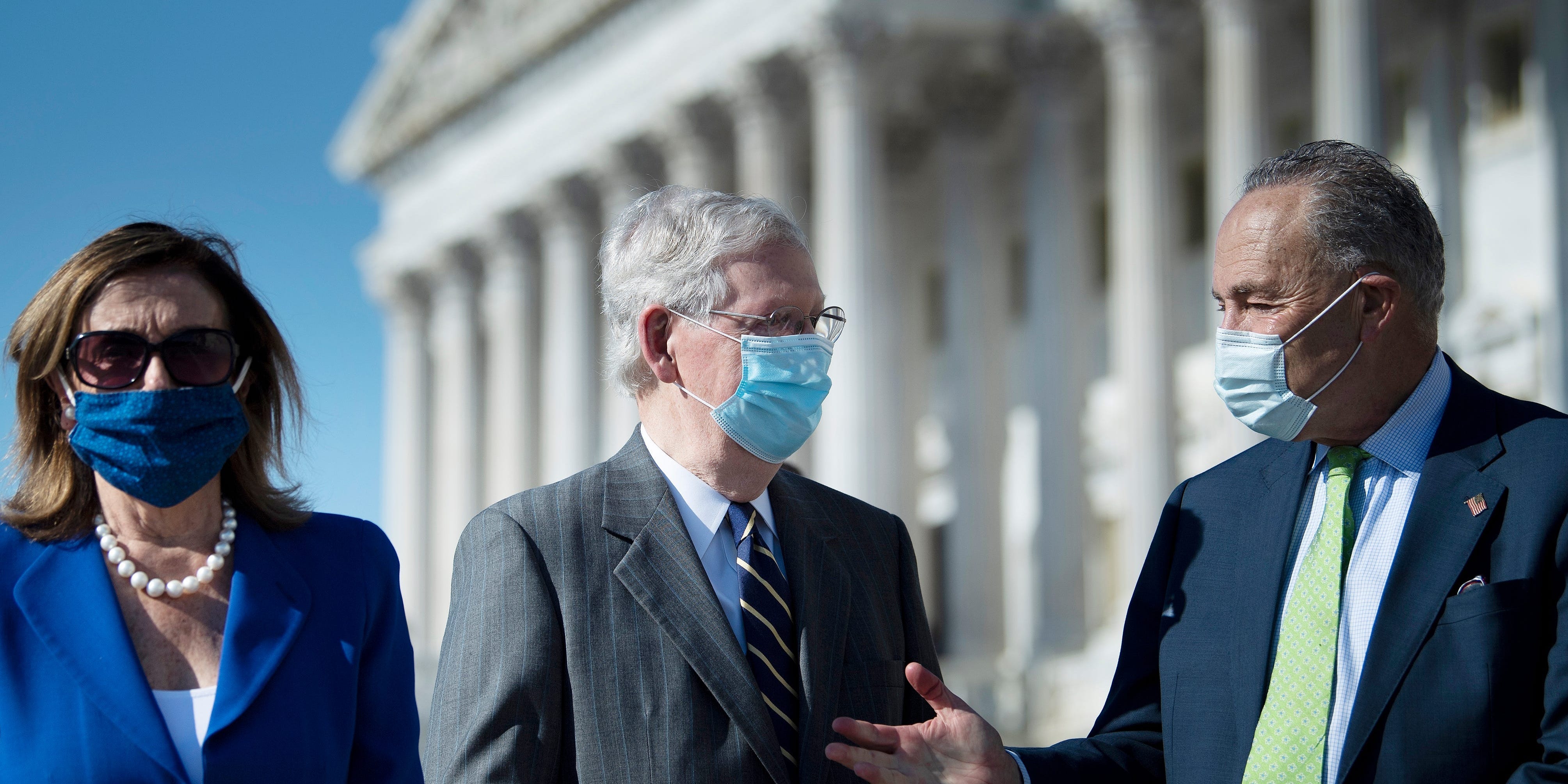 Congressional leaders on Sunday struck a long-awaited deal on a $US900 billion federal rescue package, clearing final policy hurdles and paving the way for passage in the House and the Senate amid an especially dark stretch of the coronavirus pandemic.

Senate Majority Leader Mitch McConnell announced the deal from the Senate floor on Sunday afternoon. Minority Leader Chuck Schumer made remarks about the package as well.

“The four leaders of the Senate and House finalised an agreement,” the Kentucky Republican said. “It will be another major rescue package for the American people.”

Schumer said the federal rescue proposal was inadequate to address the economic crisis at hand but called it a “down payment” meant to “give the new president a boost.”

If signed into law, the emergency spending package will funnel hundreds of billions of dollars to unemployed Americans and struggling businesses, among others. It’s the second-largest such package in US history after the $US2 trillion CARES Act, which Congress authorised in March as the coronavirus began to create economic turmoil in the US.

The pace of negotiations picked up in the past week with a series of back-to-back meetings involving House Speaker Nancy Pelosi, Schumer, McConnell, and House Minority Leader Kevin McCarthy. The group signalled it was making steady progress in recent days, and negotiators overcame the partisan disagreements that had torpedoed relief talks for months.

Congressional Democratic leaders announced that the package contained, among other provisions:


Read more:
Here’s what to know about the $US900 billion package Congress plans to pass this week with checks for individuals and a boost to unemployment aid

The deal nearly fell through after a late push from Republicans to restrain the Federal Reserve’s lending authority. The two parties compromised after a frenzied stretch of negotiations over the weekend. Also key to the breakthrough was Republicans’ setting aside a liability shield to protect firms from virus lawsuits and Democrats’ forgoing aid to states and municipalities. Those two issues, which generated significant acrimony, were not addressed in the package.

Congressional leaders are setting up a swift timetable. The House and the Senate cleared a one-day stopgap funding bill to keep federal agencies open while they draft the final legislation, which still has not been released. Lawmakers are also attempting to authorise a $US1.4 trillion spending bill to fund the government into next year.

It could lead to a rapid-fire series of votes in both chambers of Congress on Monday only hours before the deadline for government funding expires at midnight. Lawmakers will have a slim margin for error as they try to pass the two bills and avert a government shutdown. A White House representative reportedly said President Donald Trump supported the relief deal, which could smoothen its path to passage among deficit-weary Republicans.

Senior Republicans and Democrats want to merge the two pieces of legislation, meaning lawmakers could have a limited amount of time to review a broad tax-and-spending package costing over $US2 trillion.

Both $US600 in direct payments and $US300 in federal weekly unemployment aid would be half of the amounts Congress and Trump enacted in March.

A congressional summary obtained by Business Insider indicated that the income thresholds would be the same as the first round of federal payments. Individuals earning up to $US75,000 would qualify to receive the full $US600, plus an extra $US600 for each child. Couples making $US150,000 would also get the full amount, or $US1,200.

A family of four could receive $US2,400 in financial relief. Mixed-status households also would qualify after being excluded in March.

In addition, the rescue package would renew the Pandemic Unemployment Assistance Program for gig workers along with another measure providing federally funded jobless aid for people who exhausted state benefits. The federal unemployment supplement would lapse on March 14 and is not retroactive to make up for missed months.

The agreement comes as the economic recovery is showing signs of slowing down with no new federal aid in nine months. States are enacting new restrictions to suppress the rapid spread of the virus. There’s been a steady uptick in the number of Americans filing for unemployment benefits in the past three weeks, and job growth is in danger of fizzling out. The economy has regained just over half of the 22 million jobs lost in March and April.

But virus cases and deaths are reaching new highs. The pandemic has continued devastating the lives of Americans, and many small businesses are on the brink of financial ruin. A new study from the University of Chicago and the University of Notre Dame indicated 7.8 million people had fallen into poverty since late July.

Half of all small businesses in the country may have to close for good in the next year, according to a survey from the US Chamber of Commerce.

Congress is running up against the expiration of multiple federal benefit programs set up in the spring. Nearly 14 million people are threatened with the loss of all their unemployment assistance if some federal measures are not renewed this week, per Labour Department data. A moratorium on evictions also expires December 31.

Congressional Democrats made clear on Sunday this was not the last time they would press for more federal aid. They sought a much larger relief package heading into the election, and the deal they embraced was only a fraction of its size.

“Anyone who thinks this bill is enough does not know what is going on in America,” Schumer said.

“This bill gives us hope and confidence that we can do more, and we will do more,” Pelosi said. “We must do more.”

Biden issued a statement on Sunday evening hailing the rescue package, which he had urged Congress to approve in its lame-duck session. The president-elect said “our work is far from over,” however, and outlined priorities for his first 100 days in office, which included vaccine distribution and additional economic aid.

“Congress will need to get to work on support for our COVID-19 plan, for support to struggling families, and investments in jobs and economic recovery,” Biden said. “There will be no time to waste.”