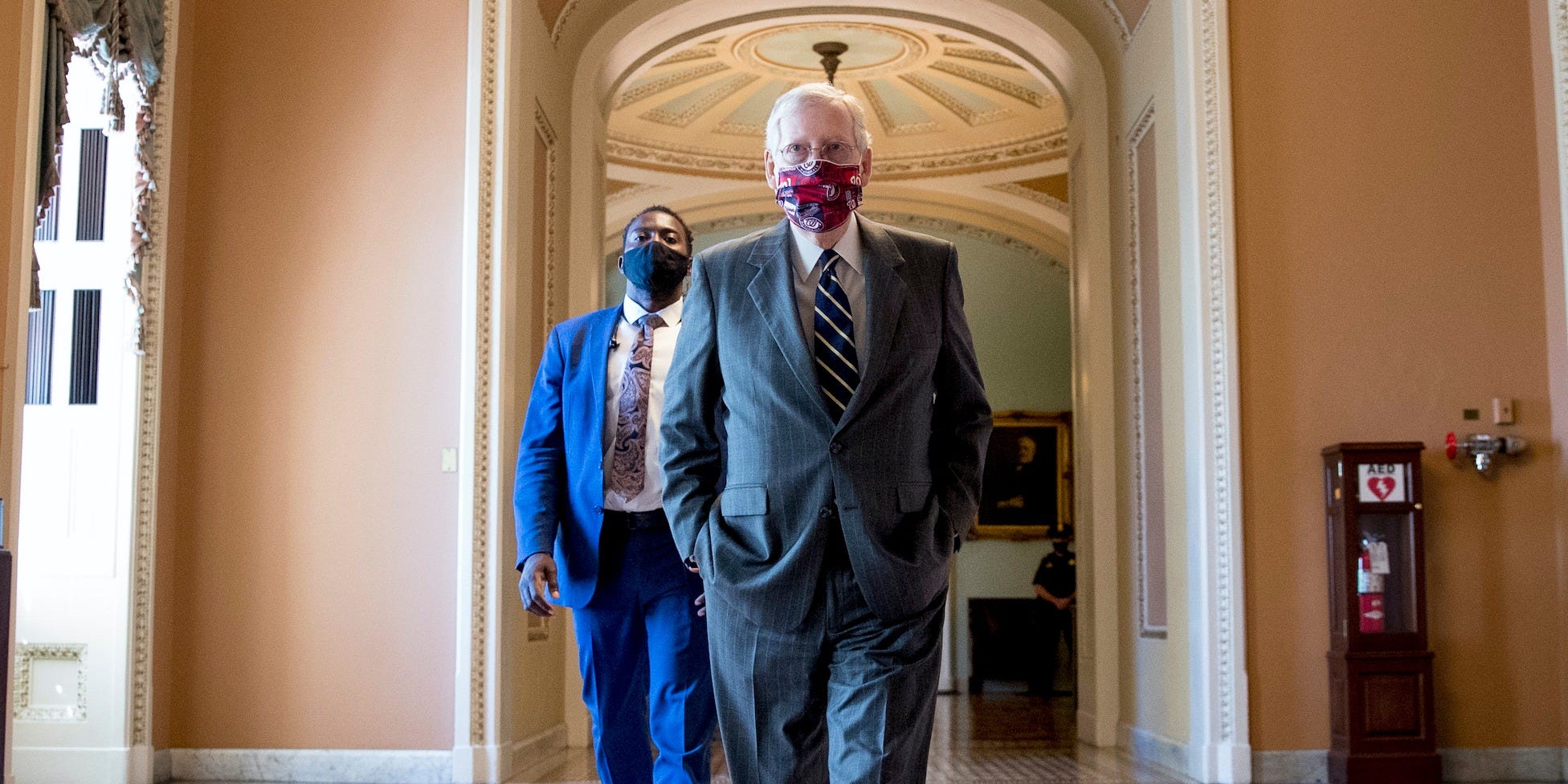 With a fierce battle over a Supreme Court replacement underway, Congress is shifting its attention away from passing another coronavirus relief package. Senate Republicans, under Majority Leader Mitch McConnell, are moving swiftly to confirm a third Supreme Court justice appointed by President Donald Trump by the end of 2020.

It’s a stark contrast with the GOP’s reluctance to approve another economic aid package earlier this year, when McConnell pushed “the pause button” on additional spending after the passage of a $US2 trillion stimulus law in March. House Democrats approved a broad spending package in May, but Senate Republicans did not take it up.

Instead, they waited until late July to roll out a plan of their own. It prompted scores of GOP senators wary of the national debt to disparage the $US1 trillion proposal as too costly, and the bill was never put to a vote. Then a “skinny” $US650 billion stimulus package from the GOP was blocked by Democrats this month, who attacked it as “emaciated” and inadequate to address the twin public health and economic crises.

“No problem to get a new Supreme Court justice approved starting from scratch, but a relief package with multiple proposals already on the table to help tens of millions from sliding into misery as we wait for widespread testing and a vaccine to emerge is too big a lift?” Katheryn Russ, an economics professor at the University of California Davis, wrote on Twitter on Saturday.

The abrupt shift in the political landscape has potentially devastating consequences for an economy amid a fragile recovery.At a congressional hearing on Tuesday, Treasury Secretary Steven Mnuchin and Federal Reserve Chairman Jerome Powell acknowledged the necessity of another stimulus package to prop it up.

“The recovery will go faster if we have both tools continuing to work together,” Powell said, referring to the Fed and Congress. He also said the economy had “proven resilient” despite the end of aid programs that lawmakers enacted in March.

Many economists have urged Congress to approve another relief package to keep people and businesses afloat through the pandemic and prevent the economy from backsliding.

“Most of the data points to the recovery still being positive, but it is losing momentum,” Ernie Tedeschi, a former economist in the Obama administration who’s now a policy economist at Evercore ISI, told Business Insider. “It’s like coasting up a mountain where every further inch that you go, you risk stopping and begin to go backwards.”

Consumer spending has mostly rebounded from its steep drop in April, according to Opportunity Insights, a Harvard-based research group. Groceries and clothing purchases drove most of the bounce.

But three data points gauge the pandemic’s ongoing destruction of the American economy:

The Coronavirus Aid, Relief, and Economic Security Act, or CARES Act, authorised a $US600 weekly federal unemployment benefit from late March through the end of July, along with a small-business aid program and a wave of $US1,200 stimulus checks.

But many of the law’s components expired nearly two months ago â€” and the economy has recovered only about half of the 21 million payroll jobs lost in March and April.

Millions of unemployed Americans are now receiving only 30% to 50% of their past wages. It averages out to $US330 each week, though the amount varies greatly from one state to another.

Trump put in place a Lost Wages Assistance program through an executive order in early August, drawing $US44 billion in disaster relief funding from the Federal Emergency Management Agency.

Forty-nine states were approved to set up the program, and FEMA said it would provide enough benefit funding for six weeks of $US300 payouts â€” a 50% cut from the $US600 federal benefit.

That means an unemployed worker stands to receive $US1,800 total from the program, depending when states start distributing payments, since it’s retroactive from August 1. Tedeschi said it was yielding limited relief for unemployed people.

“While we may have delayed the fiscal cliff from July 31, it is still coming fast for these workers,” Tedeschi said, referring to the date that the $US600 bonus ended. “They are on the front lines of the pain if we don’t pass another package.”

Meanwhile, a chart shared on Twitter by Nick Bunker, the economic research director at the Indeed Hiring Lab, showed that job postings on Indeed were 18% lower than they were at this point last year.

The latest from the @indeed Hiring Lab tracker: job postings are down 18% compared to their trend at this point last year https://t.co/EGPcJfyz1w pic.twitter.com/KhGnuNshra

Republicans and Democrats are still deadlocked on the level of federal spending needed to support the economy, and both parties are $US1 trillion apart in their proposals. Unemployment benefits and state aid are two areas of fierce disagreement.

Given the monumental Supreme Court battle, the prospect of additional aid for people and businesses before Americans cast their ballots on November 3 is extremely slim. Lawmakers are instead gearing up to approve short-term spending bills to keep the government funded through the end of the year.