Now we know what Jeff Bezos' worried face looks like 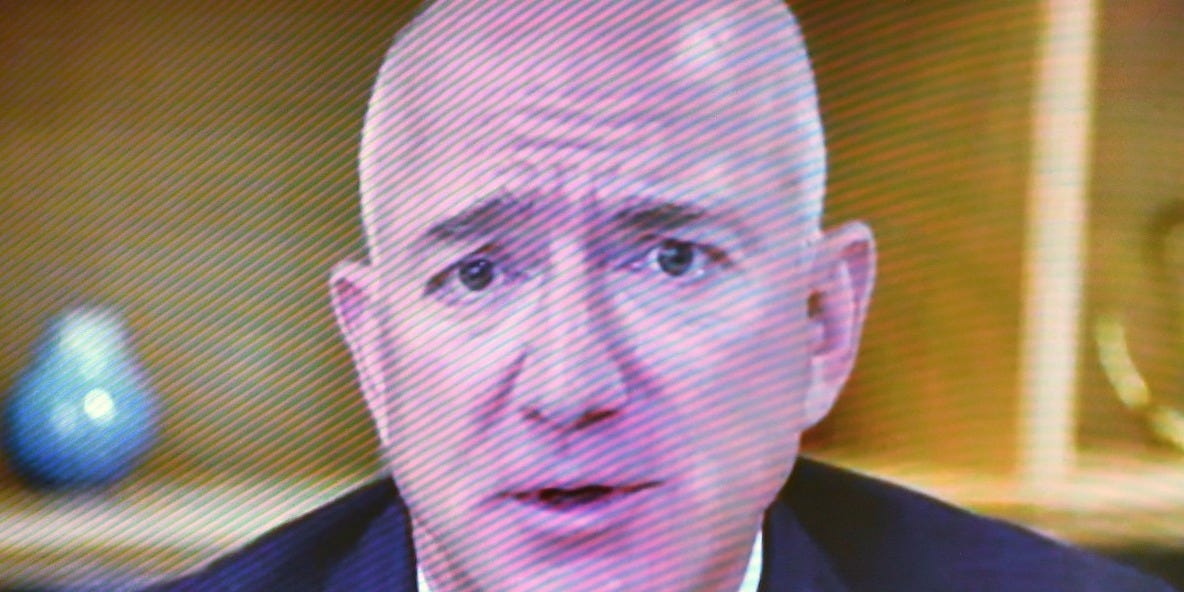 Since Amazon founder and CEO Jeff Bezos went from being another Silicon Valley executive to the richest man in the world, we have rarely seen him worried. This is a man who dared the tabloids to taunt him. This is a man who employs a personal detective named Gavin de Becker.

But on Wednesday, we saw his worried face.

We saw it while Bezos testified before a subcommittee of the House Judiciary Committee focused on antitrust enforcement. He and Facebook CEO Mark Zuckerberg, Google CEO Sundar Pichai, and Apple CEO Tim Cook were called to answer questions about their power. These are the men who control how things get to you on the internet – your apps, your messages, your ads, your news, your answers to questions, and just about anything you could buy.

For the past year this subcommittee has been investigating whether that dominance over distribution has led to America’s decades-low small-business creation – whether Facebook, Google, Apple, and Amazon use their power to destroy would-be competitors.

Given the historic nature and the intense media focus on the meeting, the lawmakers’ primary mission was to articulate their findings on the vast power these companies wield in ways that Americans could understand.

And Bezos showed us his worried face because, histrionics from a few members aside, the subcommittee members did just that.

The subcommittee “showed that these companies are gatekeepers that they engage in anticompetitive practices and that their dominance is about monopoly power, not innovation,” said Matt Stoller, an antitrust researcher and the author of “Goliath: The 100-Year War Between Monopoly Power and Democracy.”

It was the first time men like Bezos – “masters of the universe,” as Stoller put it – have had to answer questions from informed, powerful people. And under pressure, they admitted to a lot of the toxic behaviour their critics have been accusing them of for years.

When you rule the roads

For the most part, when Silicon Valley has gone to Washington it’s been an embarrassment for our politicians. Geriatric senators ask basic questions about technology, and the CEOs in the hot seat restrain themselves using their best media training and paternalistic question-answering.

There was some of that at Wednesday’s hearing, mostly from the subcommittee’s ranking member, Rep. F. James Sensenbrenner, a Republican from Wisconsin. There was also some grandstanding about conservatives being silenced on Facebook (they are not) and Google (still not). But that was a minority of the minority.

For the most part, members from both parties asked thoughtful, well-researched questions. And it seems the CEOs were not prepared for that. As Stoller said, they had to admit myriad shady business tactics:

The CEOs were media-trained. They knew to try to give long answers to run out the clock. They knew how to evade. And they knew how to give nonanswers. Bezos at one point uttered the words “I do not understand,” and I could not help but find the irony in that. Antitrust is complex. The way these companies build moats around themselves is so brilliant – and sometimes ruthless – that it’s hard to believe Bezos could get lost following anything. But in this hearing, all four CEOs looked lost.

Perhaps the most gut-wrenching moment of the hearing was when Democratic Rep. Lucy McBath of Georgia played a recording of a small textbook seller that was crushed by Amazon when it got big enough to compete with Bezos’ business.

“We were never given a reason,” the seller said. “Amazon didn’t even provide us with a notice as to why we were being restricted. There was no warning. There was no plan.”

Confronted with the recording, Bezos had no explanation.

Why we are here

Now, you may be saying to yourself, “But Linette, if we don’t have these big companies, how will we compete with big companies from China and elsewhere?”

And I will tell you that we cannot compete against anyone unless we are competing against ourselves, here in the US. What these companies do when they crush their competitors – undercutting them, or copying them, or burying their technology after an acquisition – entrenches these companies. And the more entrenched they are, the less innovative they have to be.

Perhaps, for example, if there were a Facebook competitor with a news feed that didn’t peddle lies and outrages, we might be able to choose to go to that competitor. But we can’t. Facebook bought Instagram and WhatsApp. Zuckerberg called that a “digital land grab.”

The US economy is not intended to be a land grab for the rich and powerful. It is intended to be an equal playing field, where people with talent and dedication can innovate their way to success. Even more critical than that, our country is contending with the kind of power these companies can wield. When our antitrust laws were written back in the 1890s and reviewed in the 1930s, our leaders understood that once companies became huge, they can capture politics and run this nation.

“We must not tolerate oppressive government or industrial oligarchy in the form of monopolies and cartels,” Henry Wallace, Franklin Delano Roosevelt’s vice president, wrote in a 1944 essay on the dangers of fascism.

“As long as scientific research and inventive ingenuity outran our ability to devise social mechanisms to raise the living standards of the people, we may expect the liberal potential of the United States to increase. If this liberal potential is properly channeled, we may expect the area of freedom of the United States to increase.”

There is a sense in this country that liberty is decreasing, that power is in the hands of a few and that their voices matter more than those of the many. Even Sensenbrenner, who seemed confused for a significant portion of the hearing, called on the government to review the mergers that made these companies so dominant. He said that everyone makes mistakes and that regulators likely made them there. Expect the report this subcommittee released on its findings to contain damning emails and other information about how these powerful people have hoarded power and used it to make it virtually impossible for anyone else to compete.

It’s time the American people understand why their sense that something is very wrong is valid and where it’s coming from so we can change it.