Cities across the US that have torn down controversial Confederate monuments 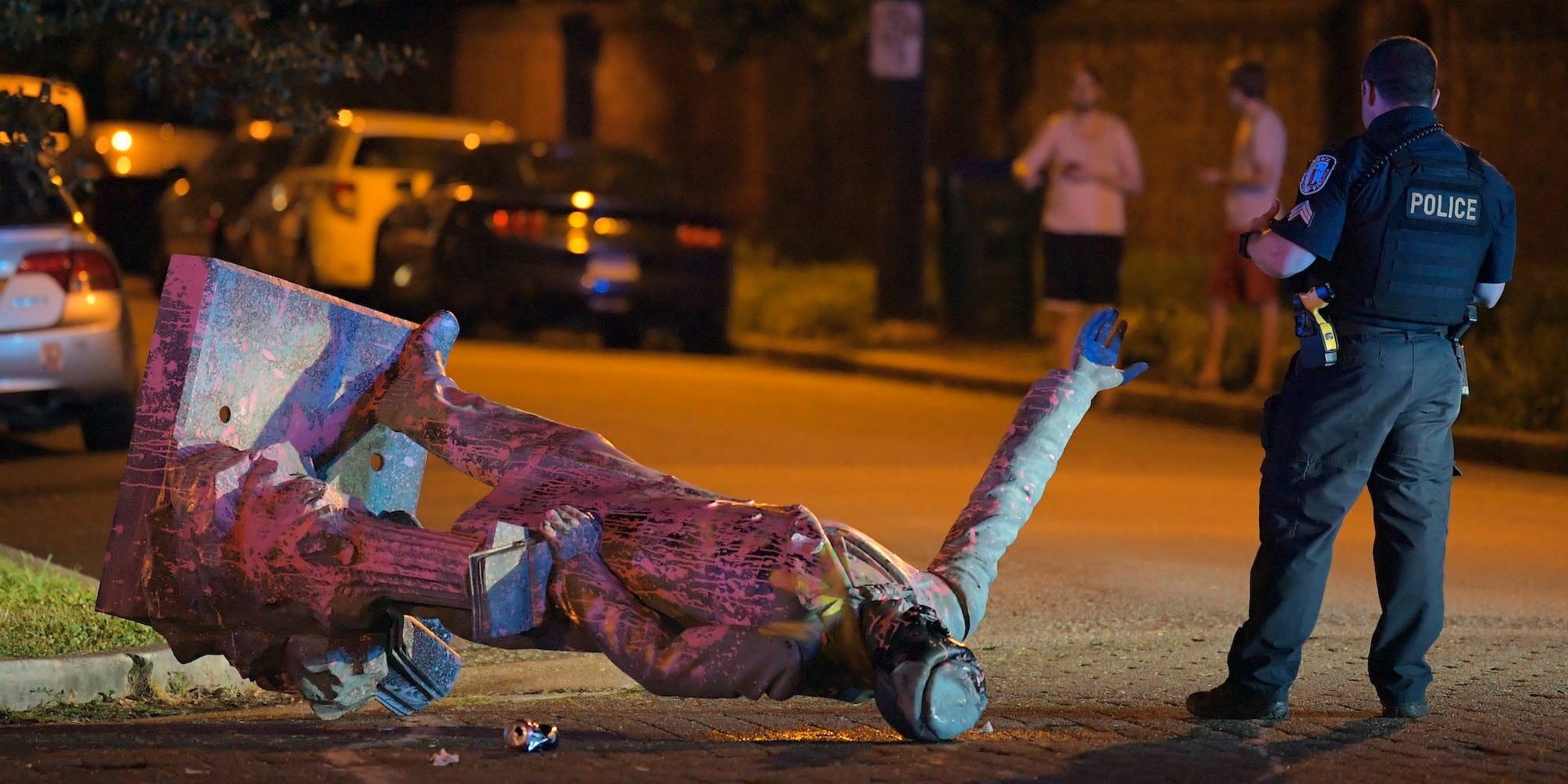 John McDonnell/The Washington Post via Getty ImagesA Richmond police officer stand by the statue of Confederate President Jefferson Davis after it was pulled down off of it’s pedestal on Monument Avenue in Richmond, VA on June 10, 2020.

Amid widespread Black Lives Matter protests across the US, a number of cities have decided to take down Confederate monuments.

For over two weeks, hundreds of thousands of protesters have taken to the streets to fight against police brutality and racism following the killing of George Floyd in police custody on May 25.

Anti-racism protesters have torn down and defaced a number of Confederate statues on their own, but some cities have stepped in to finish the job.

A national conversation about the role of Confederate statues, memorials, and plaques in public spaces last gained traction in 2018, after a white nationalist rally in Charlottesville, Virginia, turned violent. Since then, multiple cities have made an effort to rid public spaces of such monuments.

The most recent protests have reignited that conversation. Here are some of America’s major cities that have already done away with them.

MONUMENT GONE: The Confederate Soldiers and Sailors Monument at a park in Birmingham, Alabama has officially been removed. (Source: City of Birmingham) >> https://t.co/WX2DnQz5ST pic.twitter.com/c9JdNCP4lc

What happened: Following the death of George Floyd, protesters attempted to tear down the monument at its location in Linn Park. But Mayor Randall Woodfin arrived on the scene and begged protesters to stop, saying he would finish the job.

Future plans: The statue has not yet been removed, and Woodfin has not said specifically when it would be. “In order to prevent more civil unrest in our city, I think it is very imperative that we remove this statue that’s in Linn Park,” he said at a news conference.

A woman dances at the spot where a confederate statue was removed in downtown Mobile, Alabama this morning.https://t.co/yrLIZKVzWH pic.twitter.com/7Cu5e9SR3Q

What happened: After the monument was vandalised by protesters following the death of George Floyd, Mayor Sandy Stimpson ordered that the statue be removed the city.

Future plans: In a statement on Twitter, Mayor Sandy Stimpson wrote “Moving this statue will not change the past. It is about removing a potential distraction so we may focus clearly on the future of our city.”

This morning we removed plaque in @HortonPlazaPark honoring Jefferson Davis. Monuments to bigotry have no place in #SanDiego – or anywhere! pic.twitter.com/FoXPALk98H

The Confederate figure: Former president of the Confederacy Jefferson Davis

What happened: A plaque honouring Davis was removed August 16, 2017 from a city park on orders from Mayor Kevin Faulconer.

WATCH: City workers in Jacksonville have removed a statue and plaque that have been memorializing Confederate soldiers in a downtown park since 1898 https://t.co/kjtMN7HXyk pic.twitter.com/j6WiQG9lOw

The Confederate figure: A 122-year-old statue and plaque honouring fallen soldiers of the Confederacy.

What happened: Following a number of Black Lives Matter demonstrations, Mayor Lenny Curry told city officials to remove the monument and told protesters: “We have heard your voices.”

Future plans: Hours after the statue was removed, Curry announced all remaining Confederate monuments throughout Jacksonville would be removed.

NEW: A monument of Confederate Officer John Breckenridge Castleman has been taken down in Louisville, Kentucky.

"We have much more to do to dismantle the structures that got us here," the mayor tweeted. "This is just one step." https://t.co/UwpcA9KhEu pic.twitter.com/6T3rgpMEse

What happened: Mayor Greg Fischer ordered the removal of the statue.

Future Plans: The statue was taken to be cleaned at a city storage facility and will be moved to Cave Hill Cemetery, where Castleman is buried. 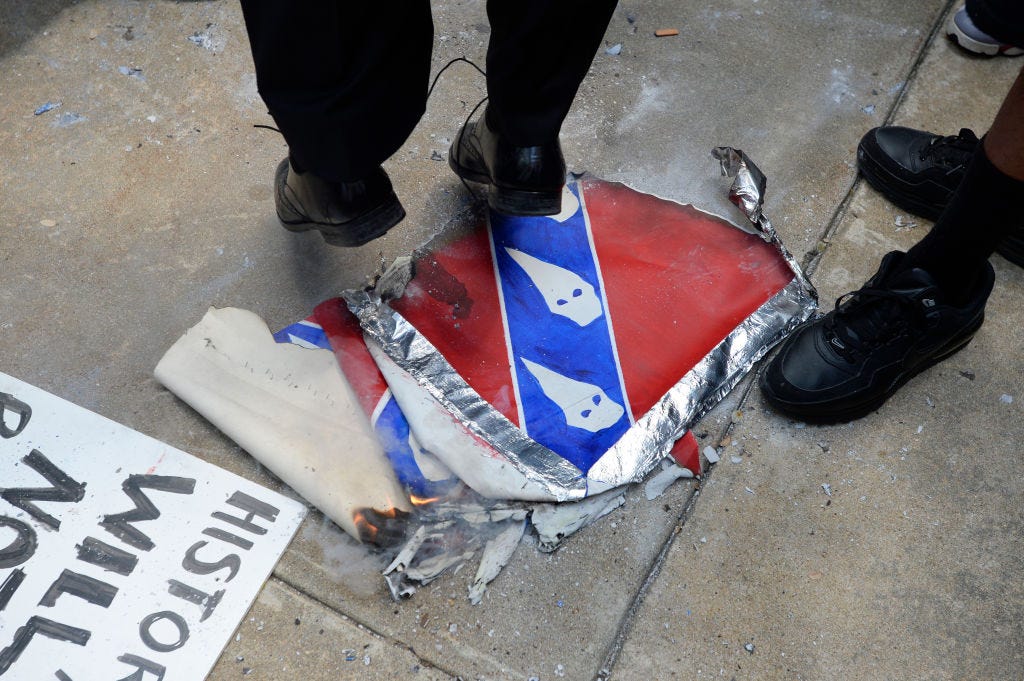 Getty ImagesDemonstrators jump on an Confederate flag replica in reaction to a potential white supremacists rally on August 18, 2017 in Durham, North Carolina.

What happened: Duke University removed a Lee statue from Duke Chapel in August 2017. Five days prior, protesters also toppled the Confederate Soldiers Monument, and eight of them faced misdemeanour charges.

Future plans: North Carolina Gov. Roy Cooper proposed relocating three more Confederate monuments outside the State Capitol to the Bentonville Battlefield Historic Site, but city officials ultimately voted against it. Instead, they said they would add plaques and memorials to honour African Americans, but it has yet to happen. 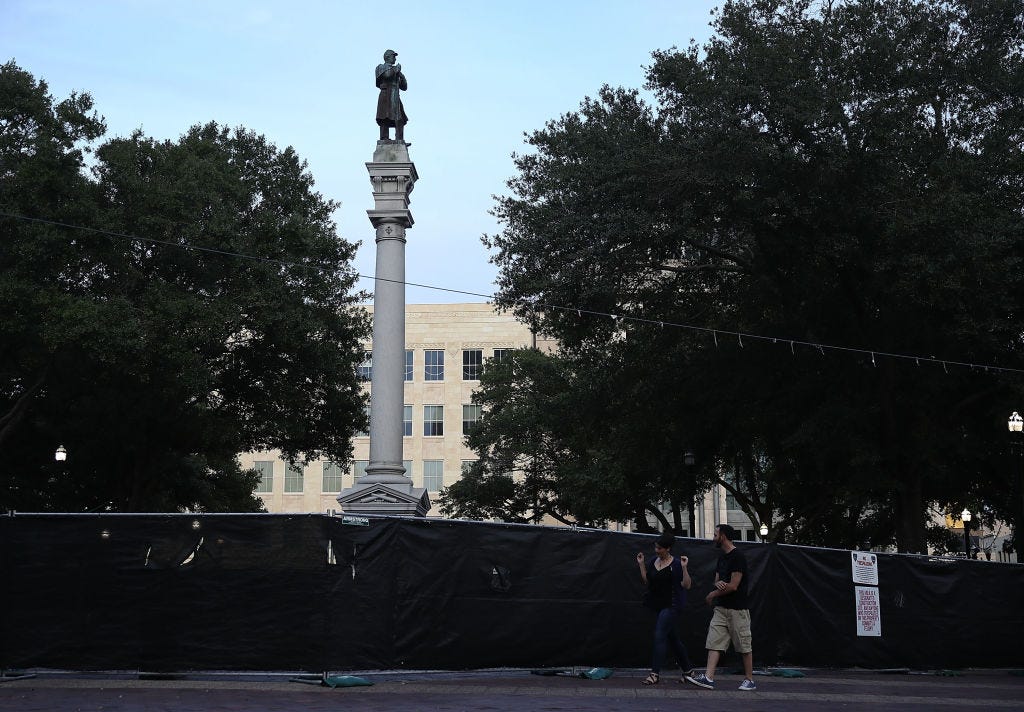 Getty ImagesA Confederate monument featuring a statue of a Confederate soldier is seen in Hemming Park in the midst of a national controversy over whether Confederate symbols should be removed from public display on August 20, 2017 in Jacksonville, Florida.

What happened: In July 2017, Orlando took down a Johnny Reb statue (which later went to a cemetery). A month later, Daytona Beach removed plaques commemorating Confederate soldiers. Around the same time, St. Petersburg removed a plaque recognising Jackson, and Gainesville and Bradenton did away with two other Confederate monuments.

Future plans: Following the Black Lives Matter protests in Jacksonville, Florida, another Confederate statue was removed, and the mayor announced that all remaining Confederate monuments would be taken out of the area. 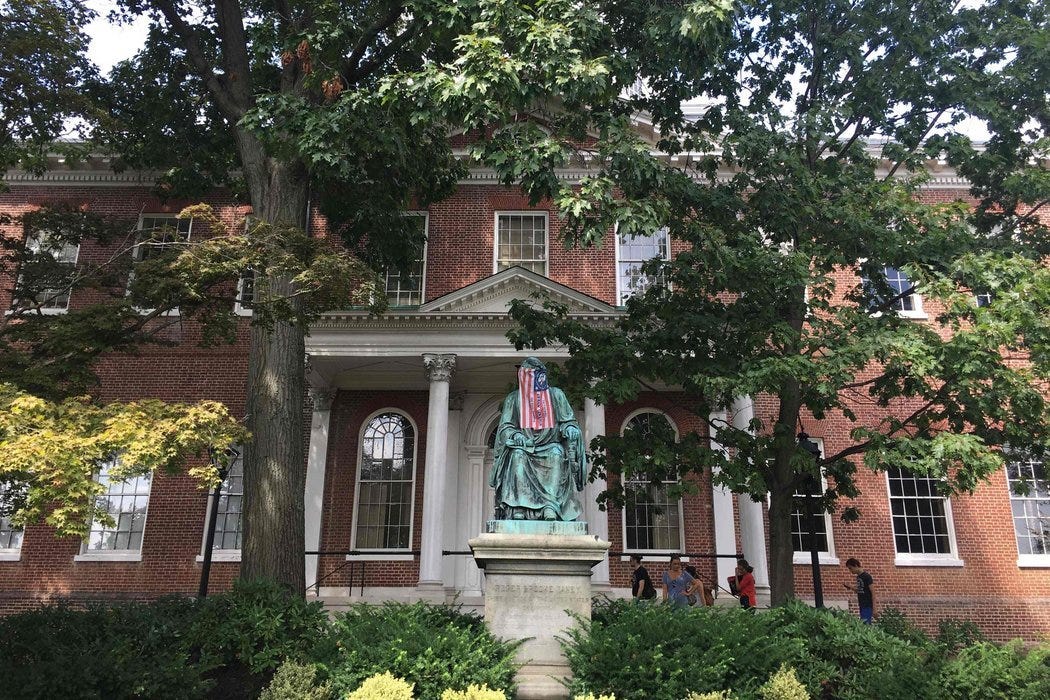 The Confederate figure: Roger Taney, a Supreme Court Justice who voted with the 1857 Dred Scott Decision, which ruled that black Americans should not be considered full American citizens

What happened: In August 2017, Republican Gov. Larry Hogan called for the removal of Taney’s statue, which was located on a perch in front of the State House, according to The Baltimore Sun.

Future plans: More than two years after its removal, the statue remains in storage with no future plans for relocation. 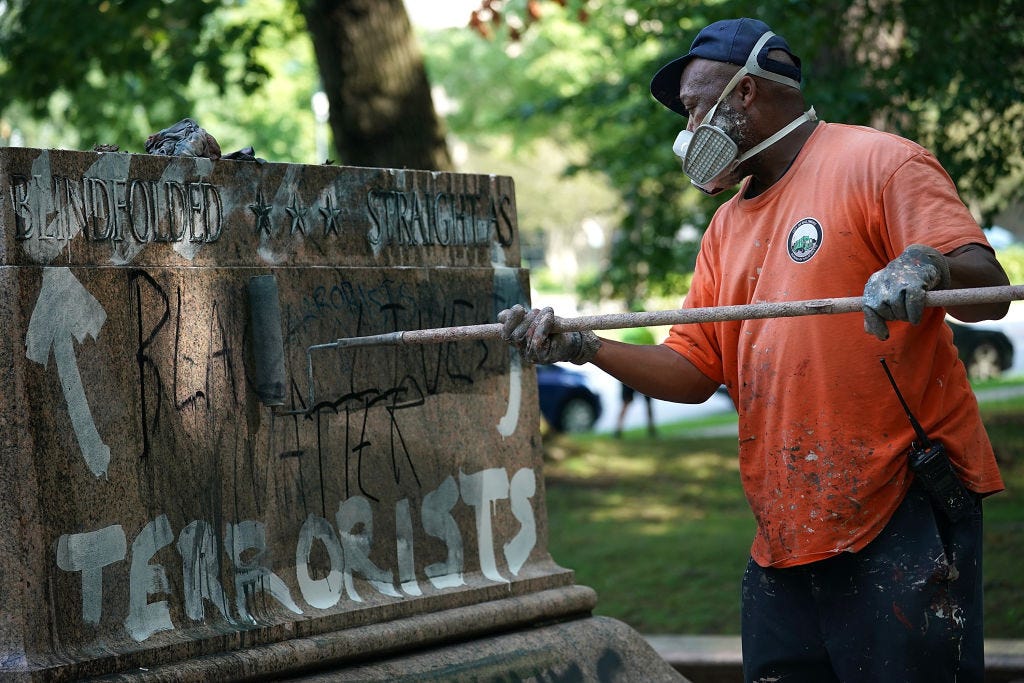 What happened: Baltimore took down four monuments of the Confederacy in August 2017. That same month, in Ellicott City, the Howard County Circuit Court building removed a memorial that bears the names of 92 Confederate soldiers.

Future plans: In 2018, a portion of Wyman Park Dell – where a former Confederate statue stood – was dedicated as a memorial site to Harriet Tubman, according to The Baltimore Sun. 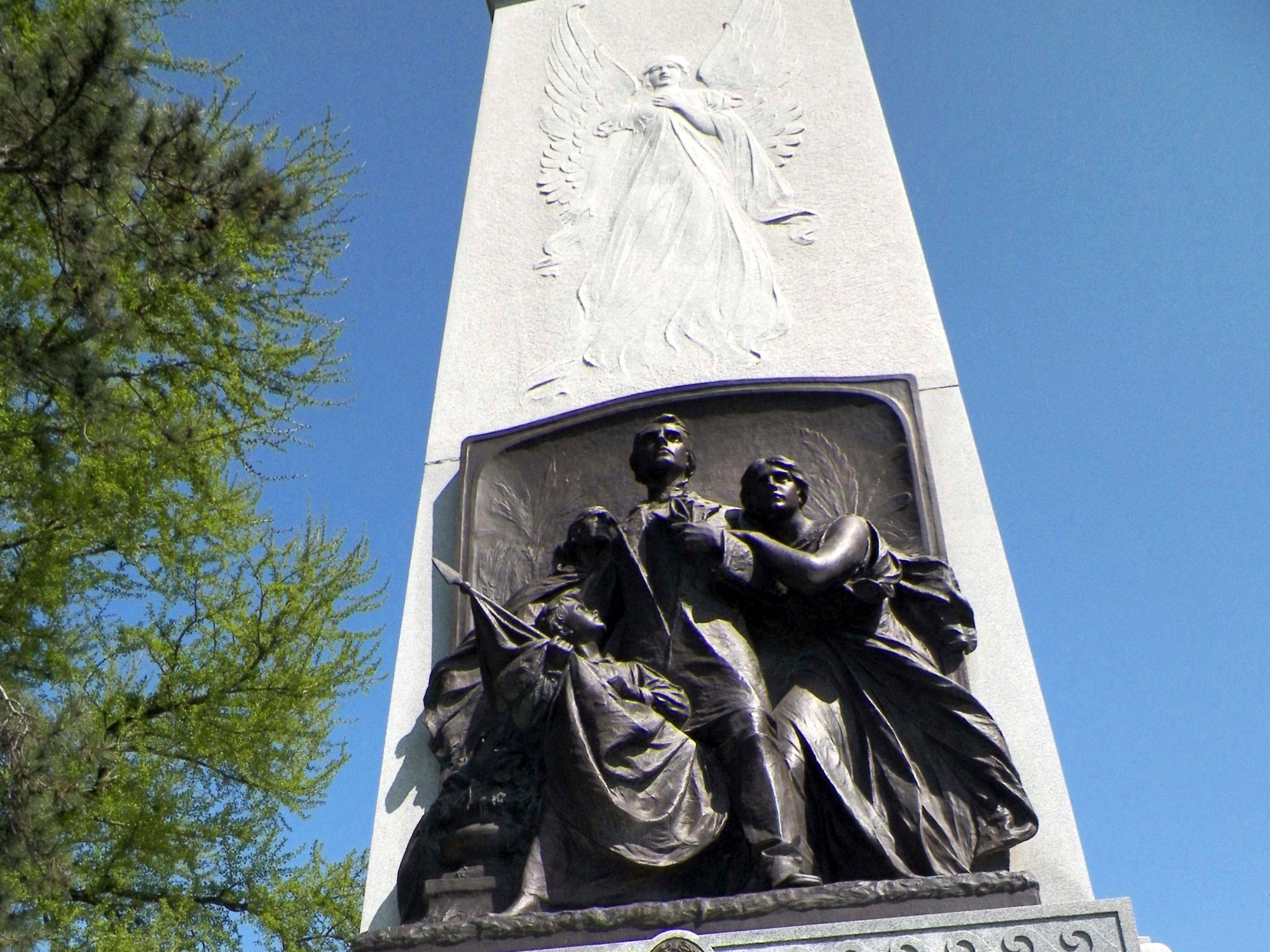 What happened: The Missouri Civil War Museum facilitated the removal of a 32-foot granite and stone monument from an outdoor park in June 2017, 102 years after its installation.

Future plans:An agreement signed before its removal allows for the memorial to be displayed at a Civil War museum or historical site. 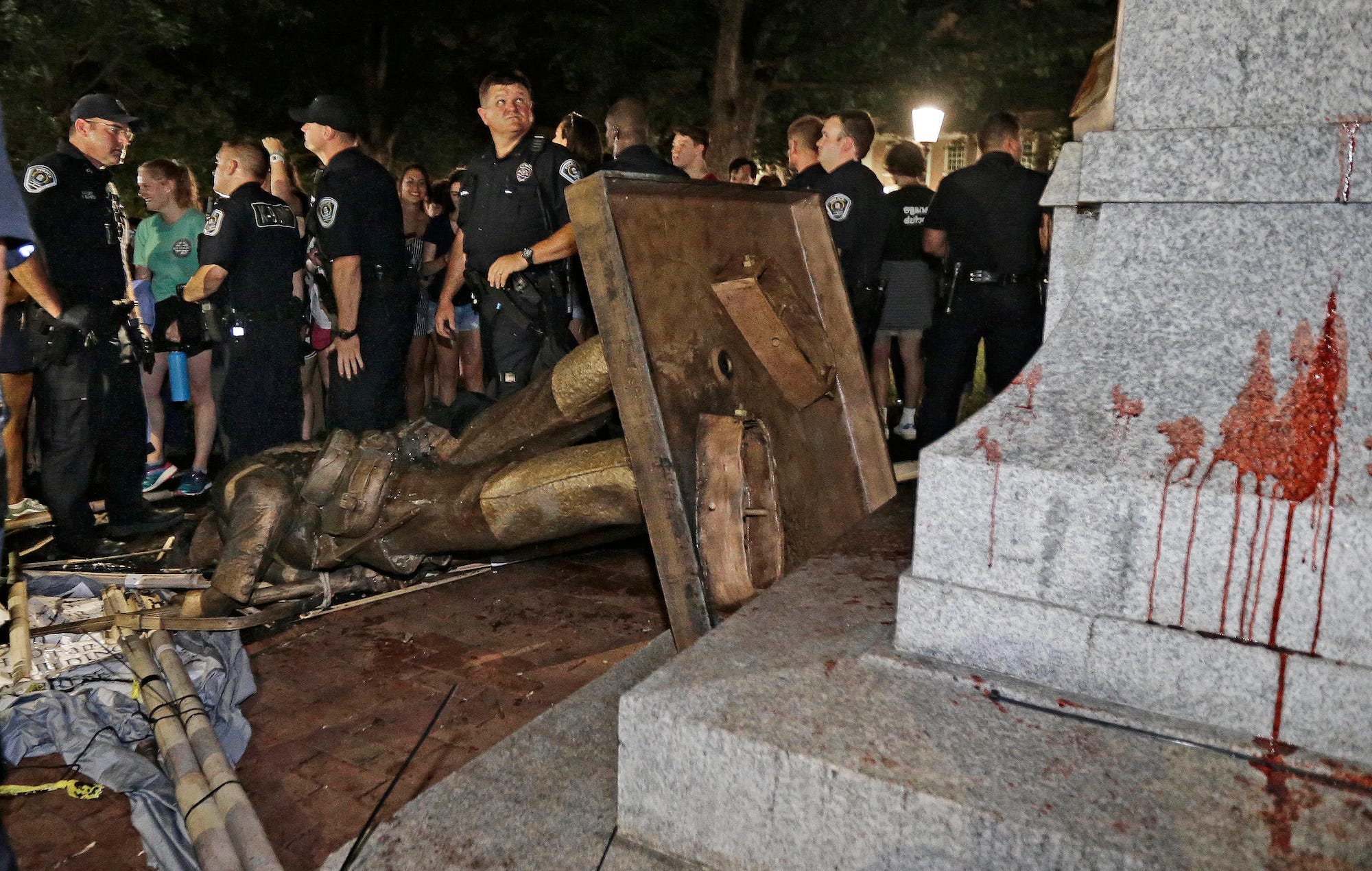 The Confederate figure: “Silent Sam” is a bronze statue of an unnamed Confederate soldier donated to University of North Carolina campus by the United Daughters of the Confederacy in 1909 to commemorate “the sons of the University who died for their beloved Southland 1861-1865”

What happened: The statue, which was prominently placed near the main entrance of campus, sparked controversy for years that culminated in hundreds of angry protesters toppling the figure off its base in August 2018. Crews removed the remaining base and plaque after a declaration by university Chancellor Carol Folt in January 2019.

Future plans: The University attempted to give the statue to the North Carolina Division of the Sons of Confederate Veterans and fund a $US2.5 million trust to resurrect it off campus, but a judge voided the agreement. Now, the future of the statue remains uncertain. 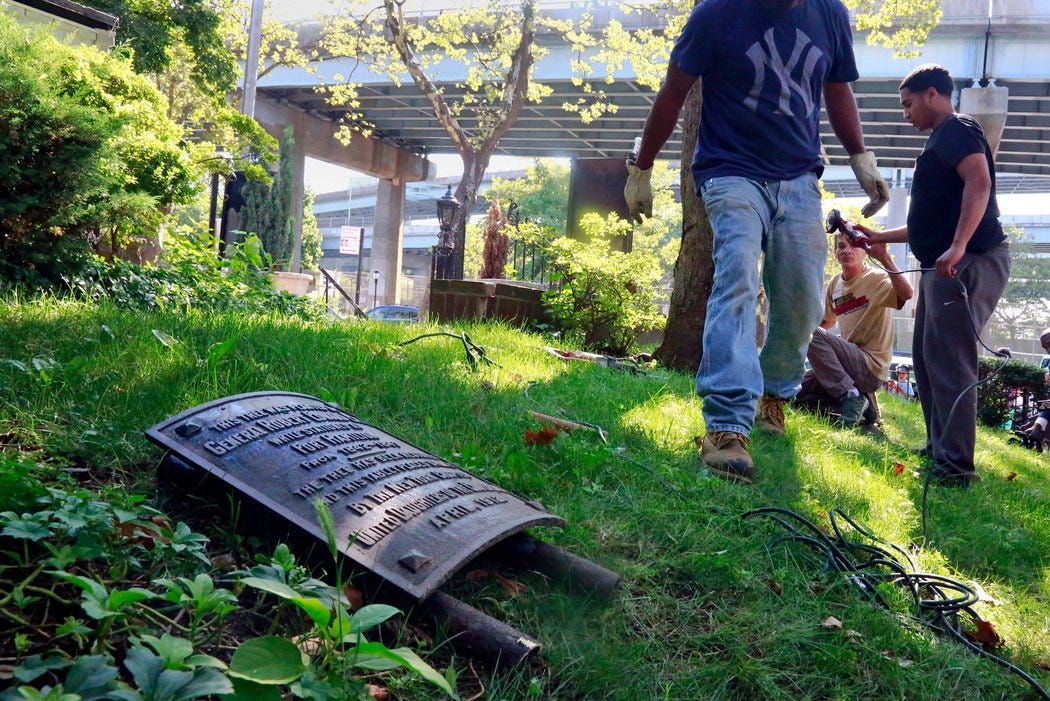 Bebeto Matthews/APA plaque, one of two honouring Robert E. Lee, lies on the ground after workers removed it.

Future plans: Several more memorials remain, including a number of street names that pay tribute to the Confederacy. As The New Yorker noted, it can be hard to get rid of Confederate monuments in the city if they are on private property. There are also powerful organisations, like the United Daughters of the Confederacy, that lobby to preserve them. 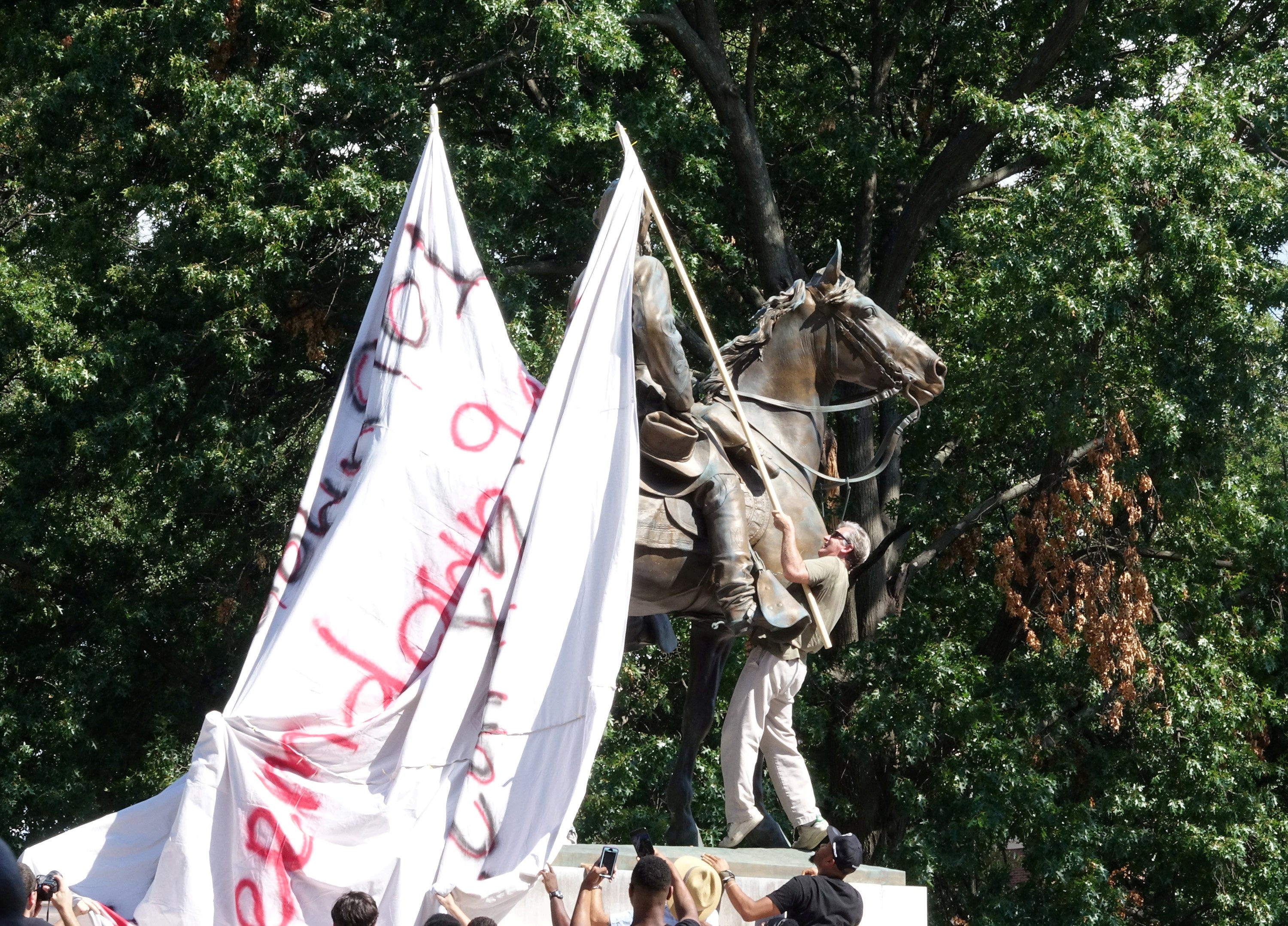 ReutersMemphis Coalition of Concerned Citizens hold a rally where the statue of Confederate general and early member of the Ku Klux Klan, Nathan Bedford Forrest, stands over his grave in Memphis, Tennessee, August 19, 2017.

What happened: Two statues of Forrest and Davis were ousted from downtown Memphis parks in December 2017, according to The Commercial Appeal. A bust honouring Mathes was also removed from a park.

Future plans: Tennessee House Republicans launched an investigation into whether the city violated any laws by removing the monuments. Then, in retaliation for removing the statue, House Lawmakers removed $US250,000 allocated to the city of Memphis budget as a form of punishment. 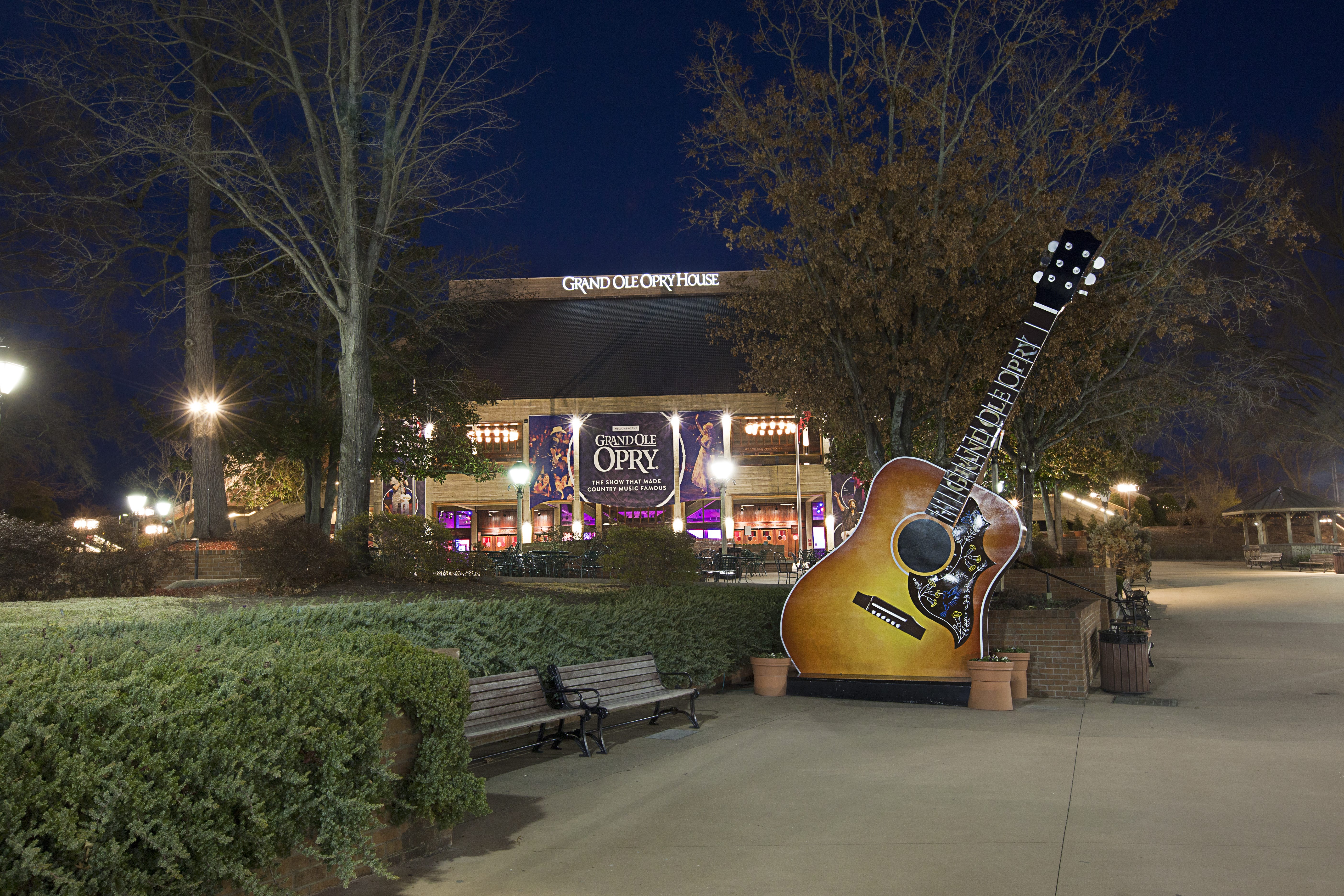 What happened: The Ryman Auditorium, the main music hall associated with the Grand Ole Opry established in 1892, removed a sign commemorating a 1897 reunion of Confederate veterans that had previously been covered.

Future plans: The sign was placed in a museum exhibit about the hall’s history. 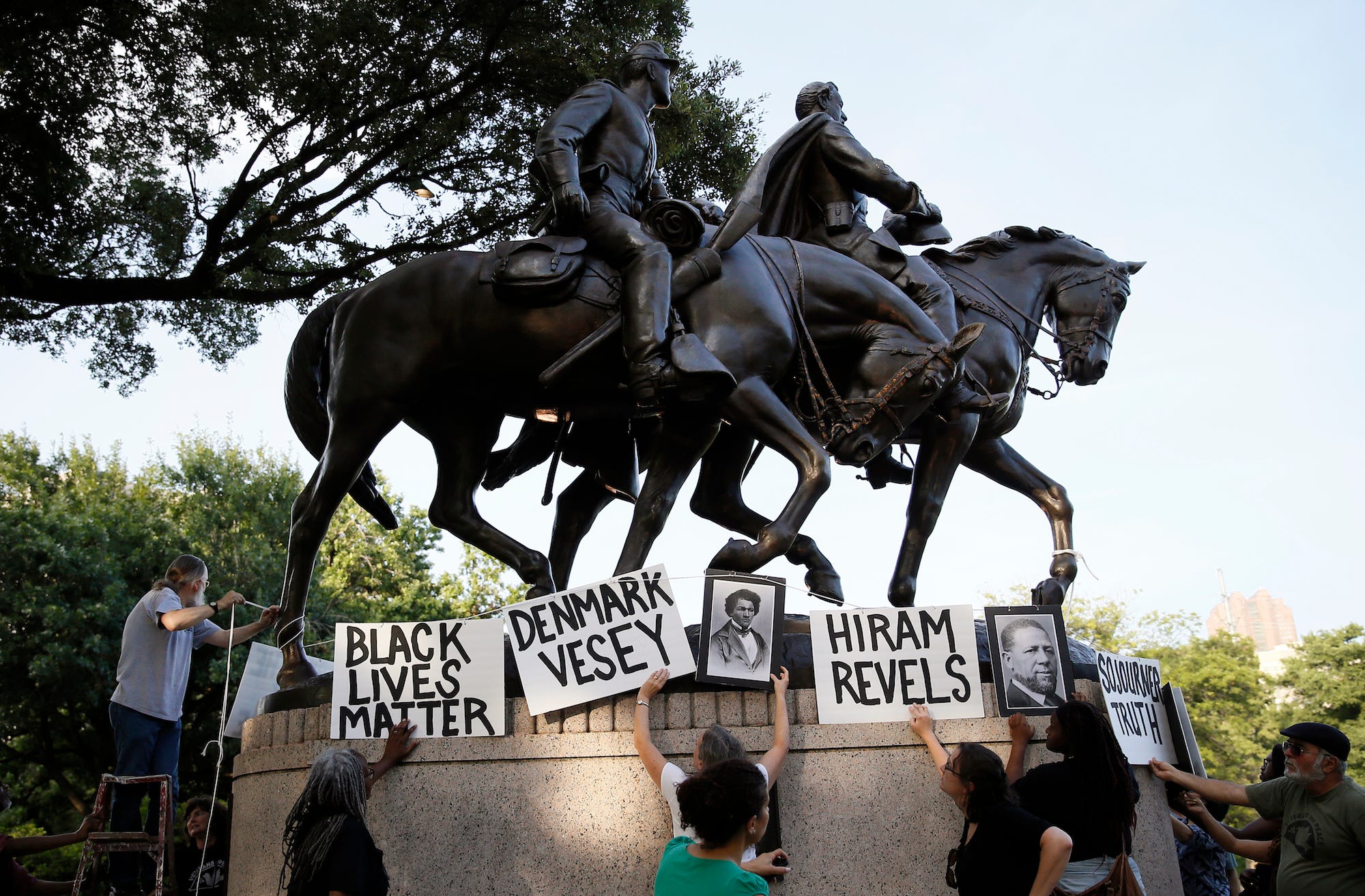 APActivist with the Dallas Peace Centre stand by a statue of General Robert E. Lee.

What happened: From August to December 2017,Dallas’ Confederate War Memorial – comprised of four statues and five inscriptions – was removed piece-by-piece from Pioneer Park Cemetery near the Dallas Convention Centre. In November,Robert E. Lee Elementary was renamed after Alice Moore Alexander (the name of a local black teacher).

Three other schools in Dallas were renamed in June 2018.

Future plans: During the recent wave of Black Lives Matter protests across the US, the city of Dallas has requested permission to remove a Confederate War Memorial from the downtown area. 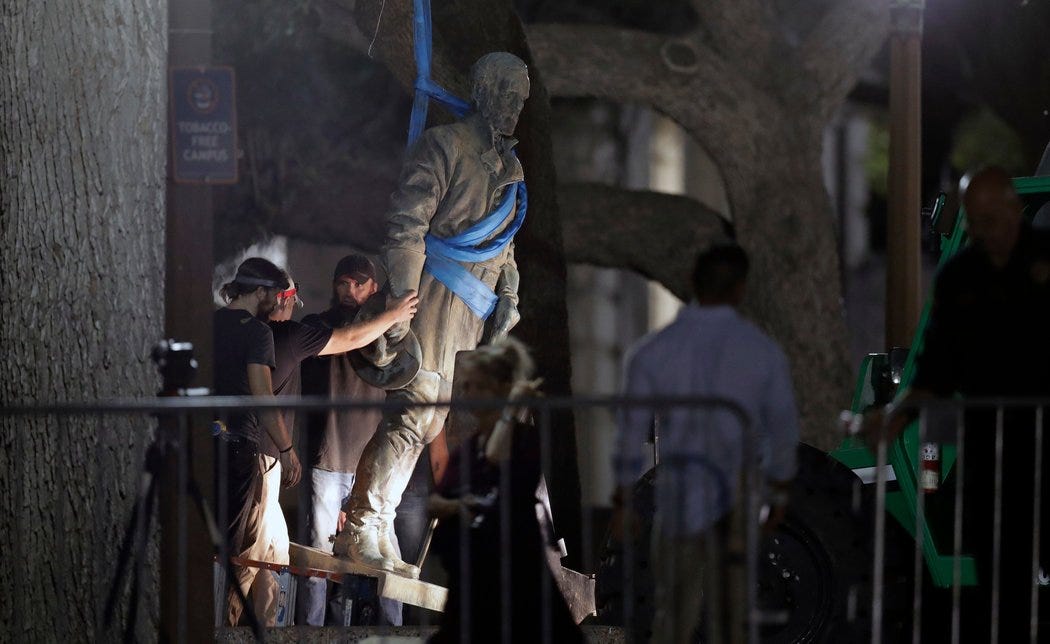 Eric Gay/APConfederate statutes are removed from the University of Texas early Monday, Aug. 21, 2017.

What happened: The University of Texas at Austin removed three Confederate statues from a prominent grassy plaza, The Texas Tribune reported.

Future plans: In 2017, the Austin City Council began the process of renaming Robert E. Lee Road after Azie Taylor Morton, an Austin native and the only black woman to serve as US treasurer, according to KXAN. 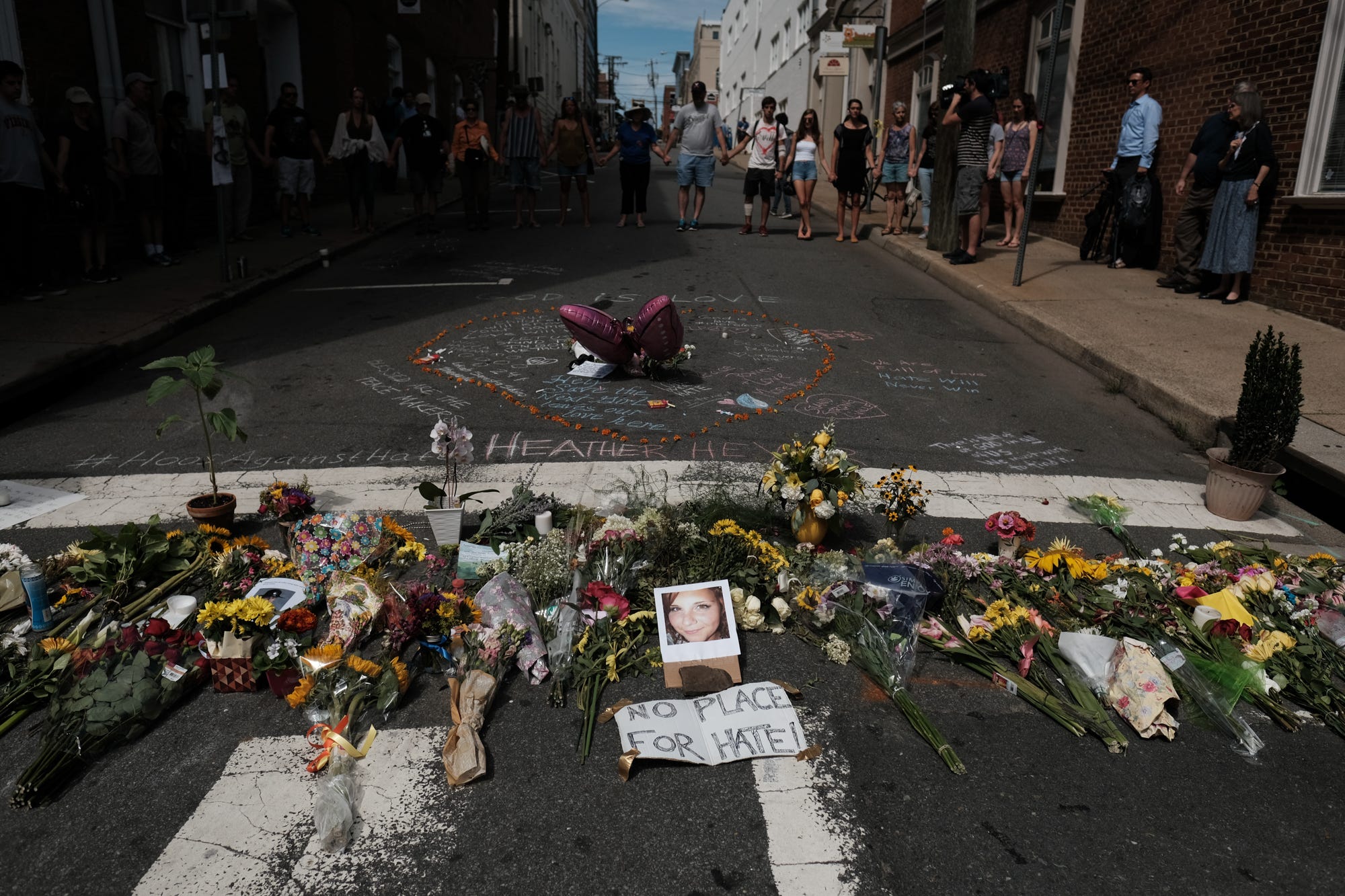 What happened: After a contentious series of hearings, the city voted to remove a Jackson statue from a park, according to NBC.

Future plans: But in September 2019, a Virginia judge ruled that removing the statues would be in violation of historic preservation efforts, and blocked the city’s ability to take them down. 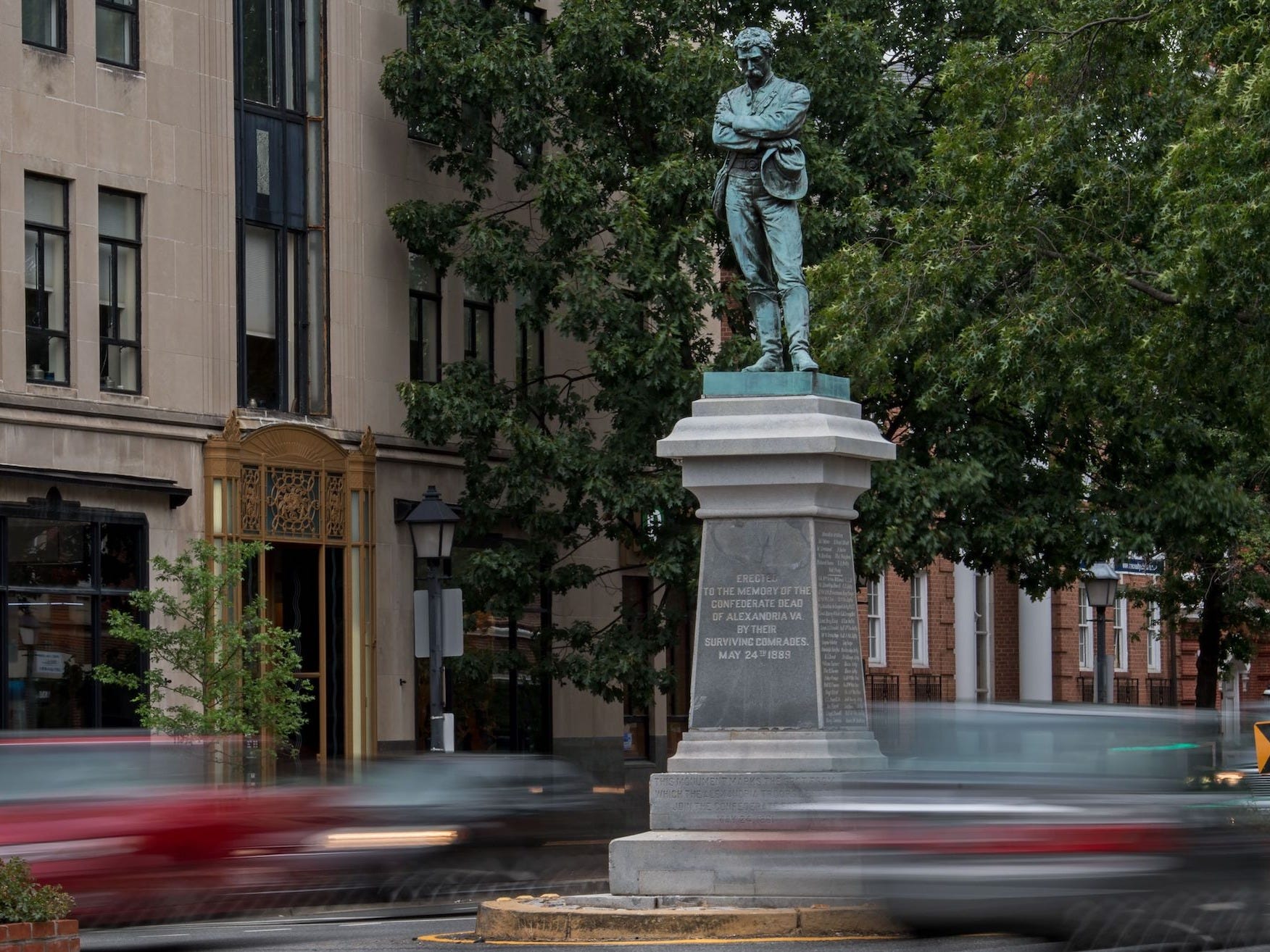 PAUL J. RICHARDS/AFP via Getty Imagesbronze statue, titled the Confederate Soldier is viewed in downtown Alexandria, Virginia, has been removed.

The Confederate figure: A statue of a Confederate soldier named “Appomattox” who stood with its back to the North

What happened: After protests against police brutality and racism erupted across Virginia, the owners of the monument, The United Daughters of the Confederacy ordered for the statue to be removed.

Future plans: Virginia has the largest number of Confederate statues in the US, and Governor Ralph Northam said he wants to change that. He has directed a statue of Robert E. Lee in Richmond to be taken down and placed into storage. 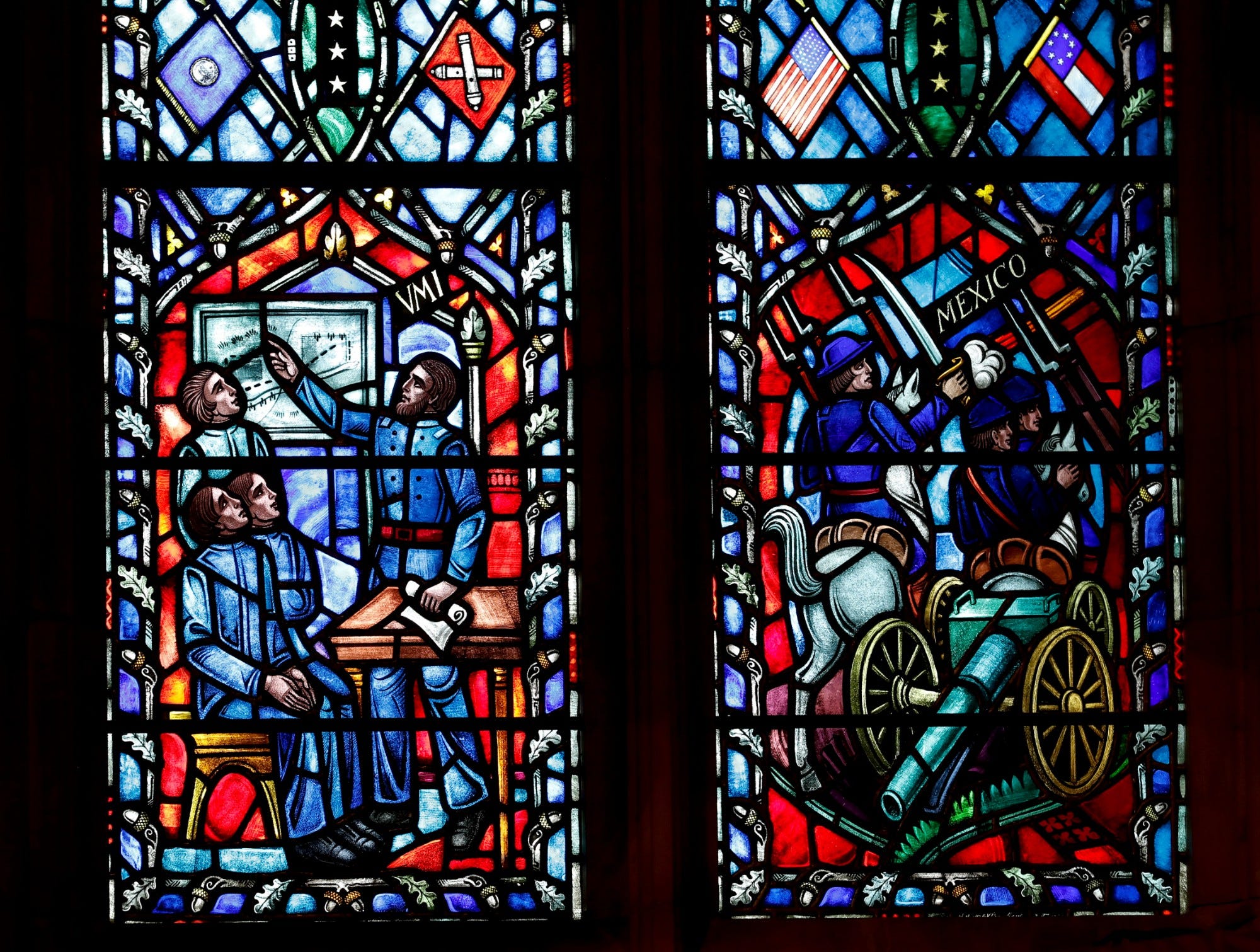 Carolyn Kaster/APA detail of stained glass windows depicting two iconic Confederate generals that are being removed is seen at the Washington National Cathedral in Washington.

What happened: The National Cathedral announced it would remove two stained-glass windows depicting the two Confederate soldiers in September 2017.

In August 2017, the stewards of the National Mall announced that an inscription on the Thomas Jefferson Memorial was updated to say that the founder owned slaves.

In addition to cities removing statues, a number of protesters have torn down and defaced Confederate monuments on their own. Here’s a list of monuments that protesters took down after Floyd’s death. 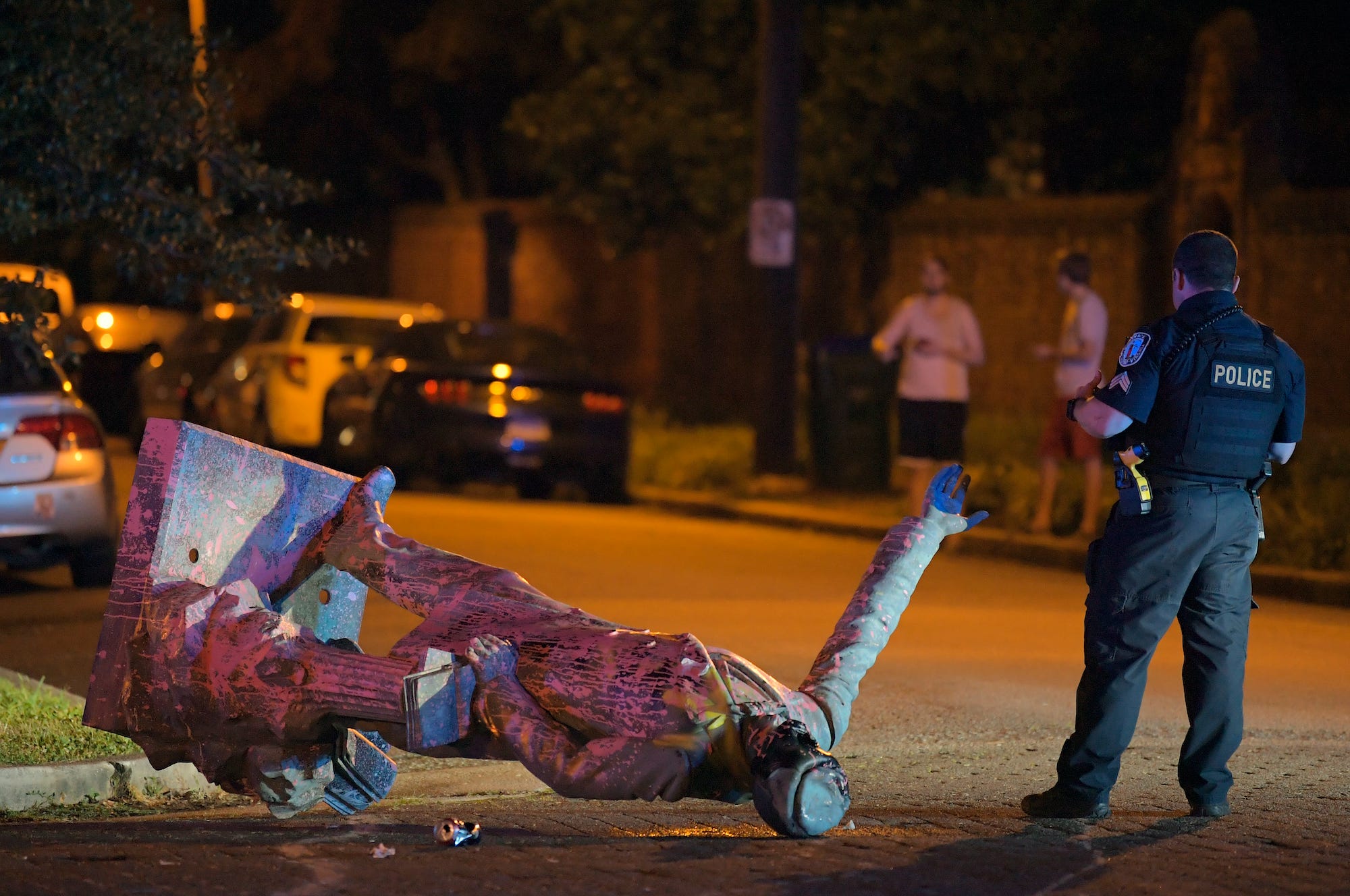 John McDonnell/The Washington Post via Getty ImagesA Richmond police officer stand by the statue of Confederate President Jefferson Davis after it was pulled down off of it’s pedestal on Monument Avenue in Richmond, VA on June 10, 2020.