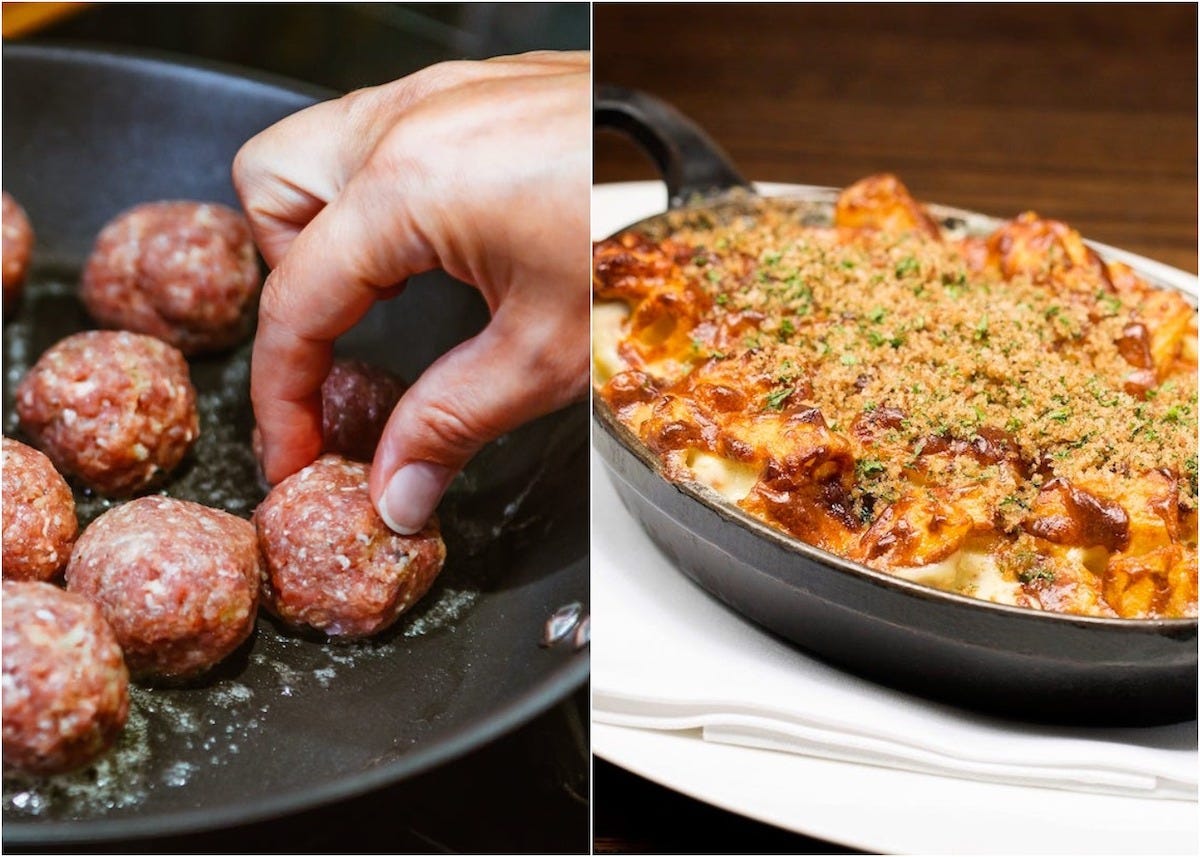 Linus Strandholm / EyeEm / Getty Images and Berner’s TavernTry whipping up a couple of these comfort food dishes from Michelin-starred chefs.

Just because you’re staying home right now doesn’t mean you can’t jazz up your dinner with something a little bit special.

Any kind of favourite food can be a comfort during the rough parts of life, from hot buttered toast to a particular brand of candy bar.

But if you’re really keen to push the boat out and give yourself some food-based comfort, then try your hand at these five recipes from Michelin-starred chefs.

The key to any recipe is to approach it with an open mind if you can’t source all the ingredients needed. In the grand scheme of things, it really doesn’t matter if you swap spaghetti pasta strands for whatever shape you have available – at the end of the day, you’re still soothing your soul with a warm bowl of goodness.

Get creative, be adaptable, and lose yourself in the art of cooking one evening as a delicious distraction. 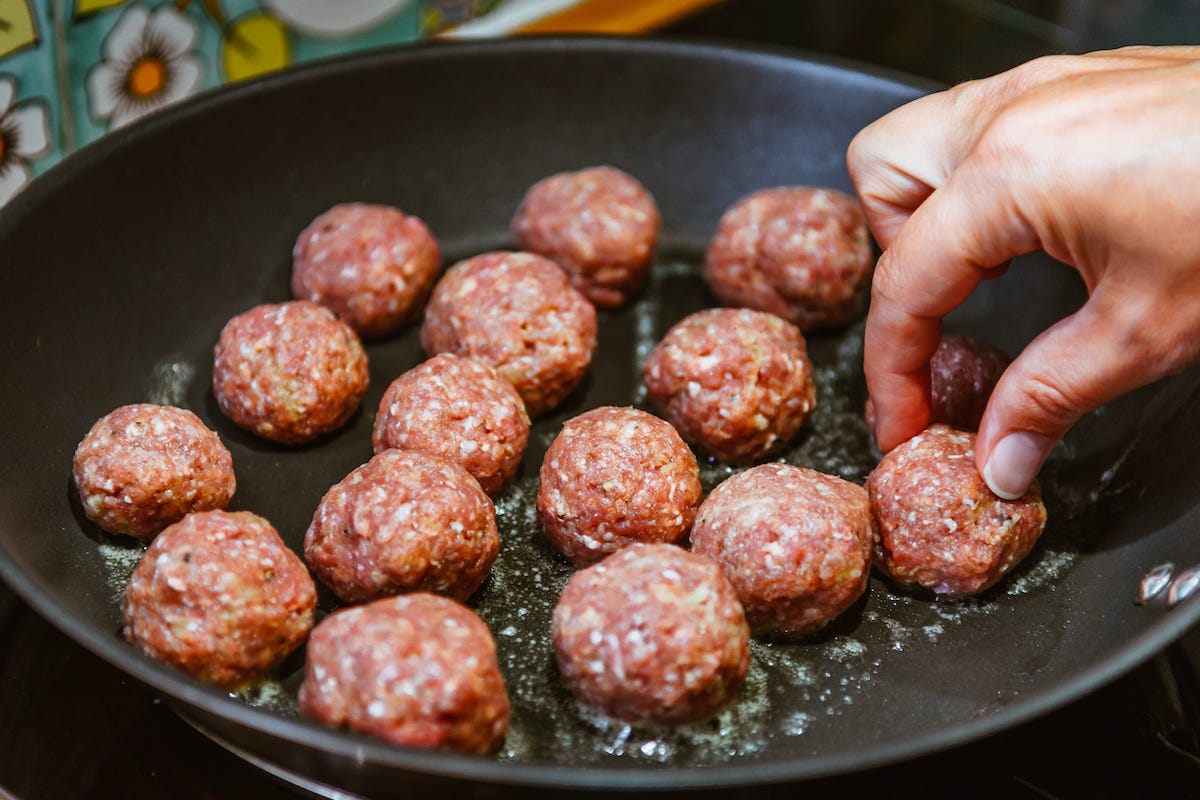 Linus Strandholm / EyeEm / Getty ImagesFry the meatballs until golden all over, then remove and put on to a plate.

Ollie Dabbous from Hide, London, said of this recipe: “The key to meatballs is the addition of a panade: a mix of bread, milk, and egg. This softens the mix so they are yielding rather than firm. Of all the things I make at home, this is the most satisfying and there’s only one pan to wash up!”

– Mix the bread, milk, and egg together and leave for 30 minutes to rehydrate. – Mix in the mince, salt, pepper, and oregano then chill the mix. – Roll into balls, then roll in the flour in a baking tray. – Heat half the olive oil in a pan and fry the meatballs until golden all over, then remove and transfer to a plate. – Heat the remaining oil in the same pan and add the vegetables, season lightly, cover with a lid and cook over a medium heat for five minutes. – Return the meatballs to the pan then add the wine and boil for one minute. – Add the tomatoes, then the same volume of water, the butterbeans, and the cinnamon. – Bring to a simmer and cover with a lid. Cook for 45 minutes on the stove or in the oven, then add the courgette and cook for another 10-15 minutes until the vegetables are all soft, and the courgettes tender. – If needed, remove the lid and boil to concentrate the liquid. – Remove from the heat and allow to cool, as this is better warm than piping hot. – Mix the mixed leaves, mint, parsley, and feta with a little olive oil and lemon juice, then scatter over the casserole and serve immediately with some crusty bread. 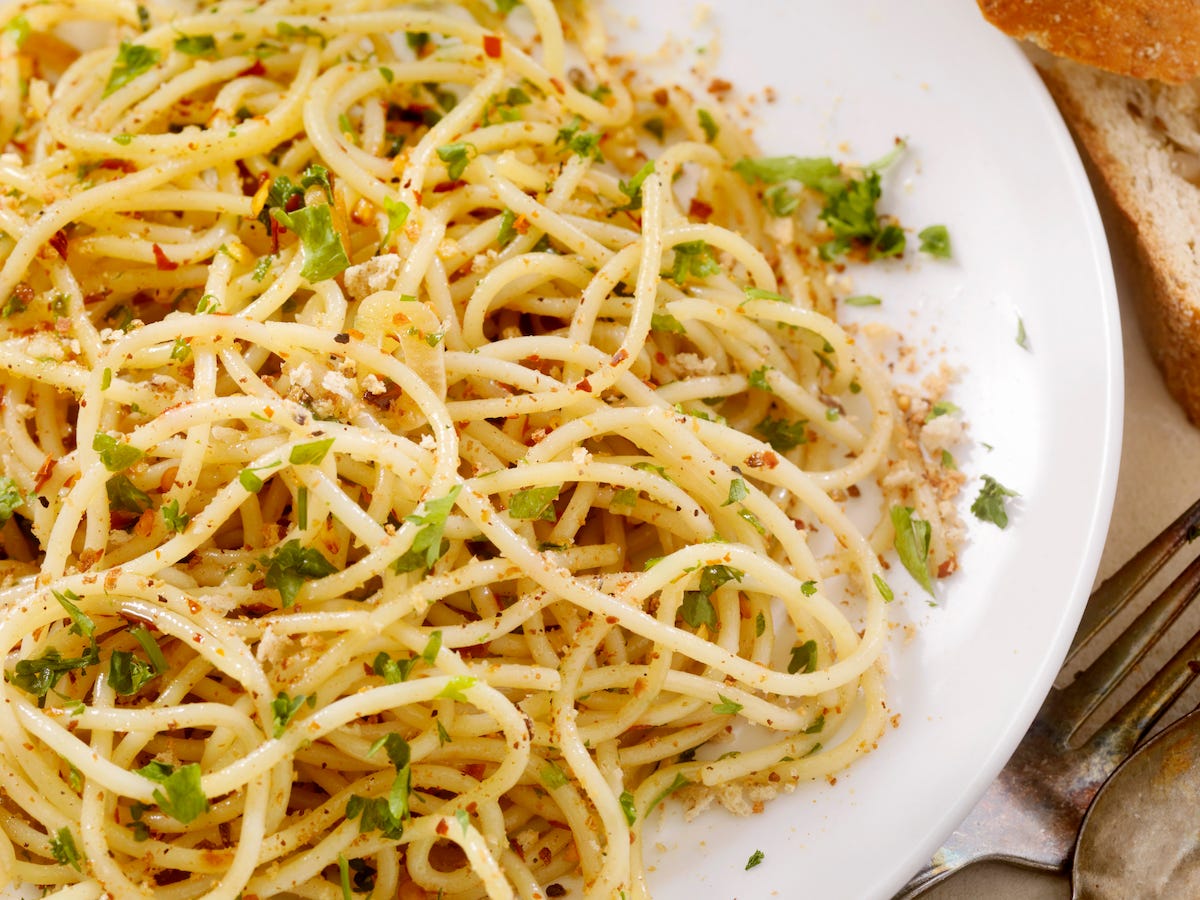 LauriPatterson / Getty ImagesOptional ingredients to throw into this dish could be shrimp and cherry tomatoes.

Jeremy Chan from Ikoyi, London, said: “This is one of the greatest pasta dishes of all time because it packs so much flavour but takes less than 20 minutes to make. It’s perfect after a long day at work or a quick lunch to eat outside if it’s sunny.”

– Cook the pasta in salted boiling water until al dente and drain. – Caramelize a generous handful of sliced garlic in olive oil. – Throw in the cooked pasta, freshly chopped parsley, chilli flakes, and lemon. – Mix together and serve. 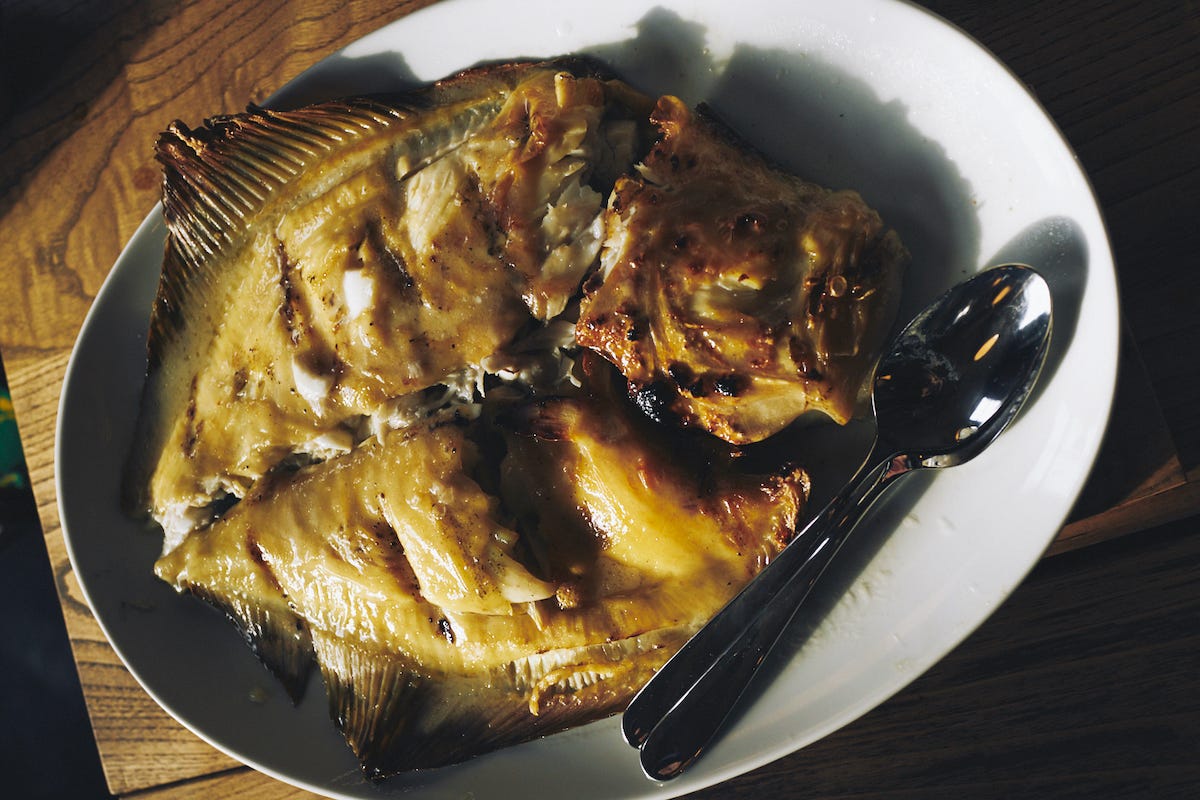 BratYou’ll know the turbot is done when the flesh starts to come away from the bone.

This comforting recipe is from Tomos Parry, owner and chef at Brat, London.

– Preheat oven to 180°C (356°F). – Bring a pot of salted water to the boil. – Thinly slice the white onion. – Wash the potatoes and fennel and trim away the green stalks. Slice the potatoes and fennel using a sharp knife into 1/2cm width pieces, blanch the fennel and potatoes in the boiling water for three minutes. – Remove from water and toss all the vegetables and fennel seeds and chilli flakes with olive oil and salt. – Spread the vegetables across a baking tray. – Drizzle with olive oil and place in the oven for 10 minutes, turning halfway to help cook the fennel through and add a touch of caramelization. – Meanwhile, wash the turbot and pat dry with kitchen paper – Remove the tray from the oven, pour in one glass of white wine and scatter half of the tarragon sprigs over the top. Season well, then place the turbot on top of the fennel and potatoes. – Finely slice the lemon, place over the turbot and drizzle with some more olive oil. – Season well and roast in the oven for 20 minutes, add the clams and the other one glass of white wine to the tray and cook for a further 10 minutes until the flesh of the turbot is just cooked through and starts to come away from the bone and clams are open and cooked. – Scatter over chopped parsley, chervil and a good squeeze of lemon. 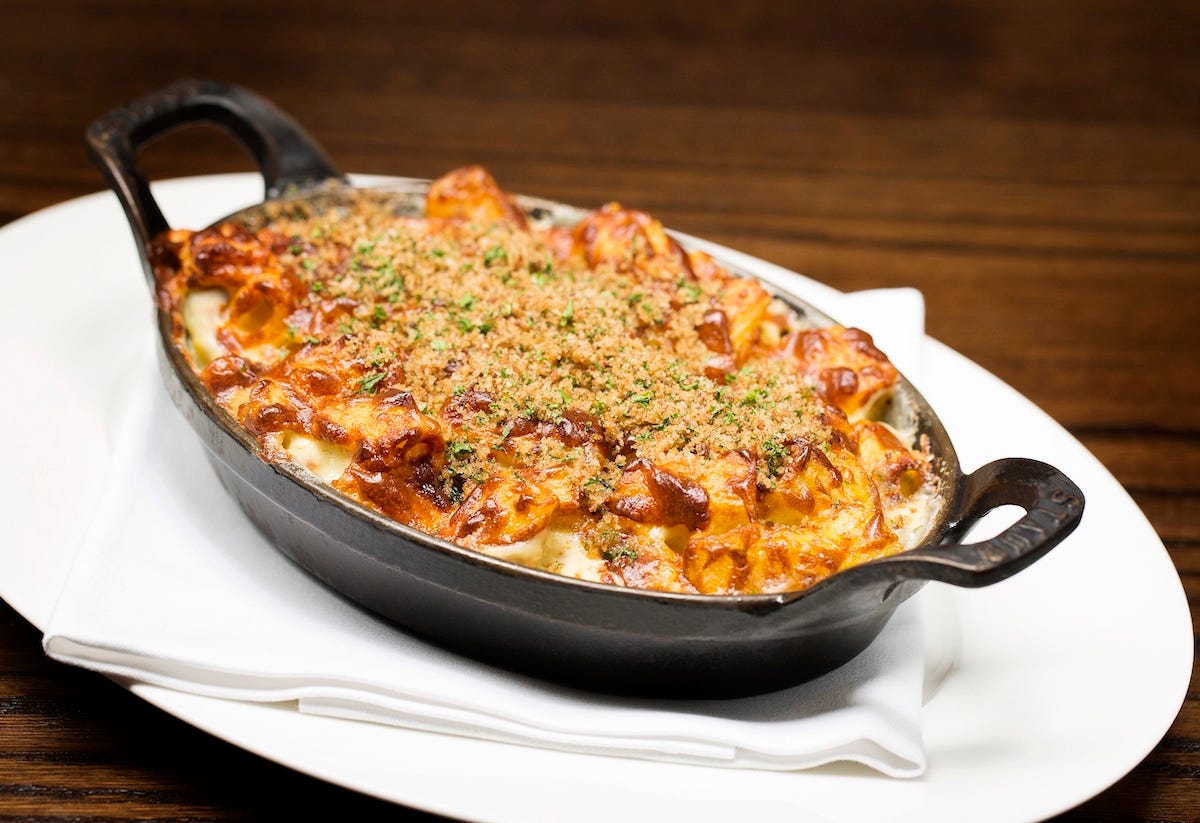 Developed by Executive Chef, Phil Carmichael, from Berners Tavern in London, this dreamy dish has eight recommended servings. When eaten in-house, Berners Tavern serves it with a 24-hour red wine marinated braised beef blade baked in, and topped with a sourdough crumb.

– Grate all the cheeses and mix them all together along with the mustard. – Bring the cream up to a boil and pour over the cheese, return the mix to the stove and whisk or blend with a hand blender. – Mix in the cooked macaroni. – Place in serving dishes and cover with grated cheddar. – Bake until golden brown. 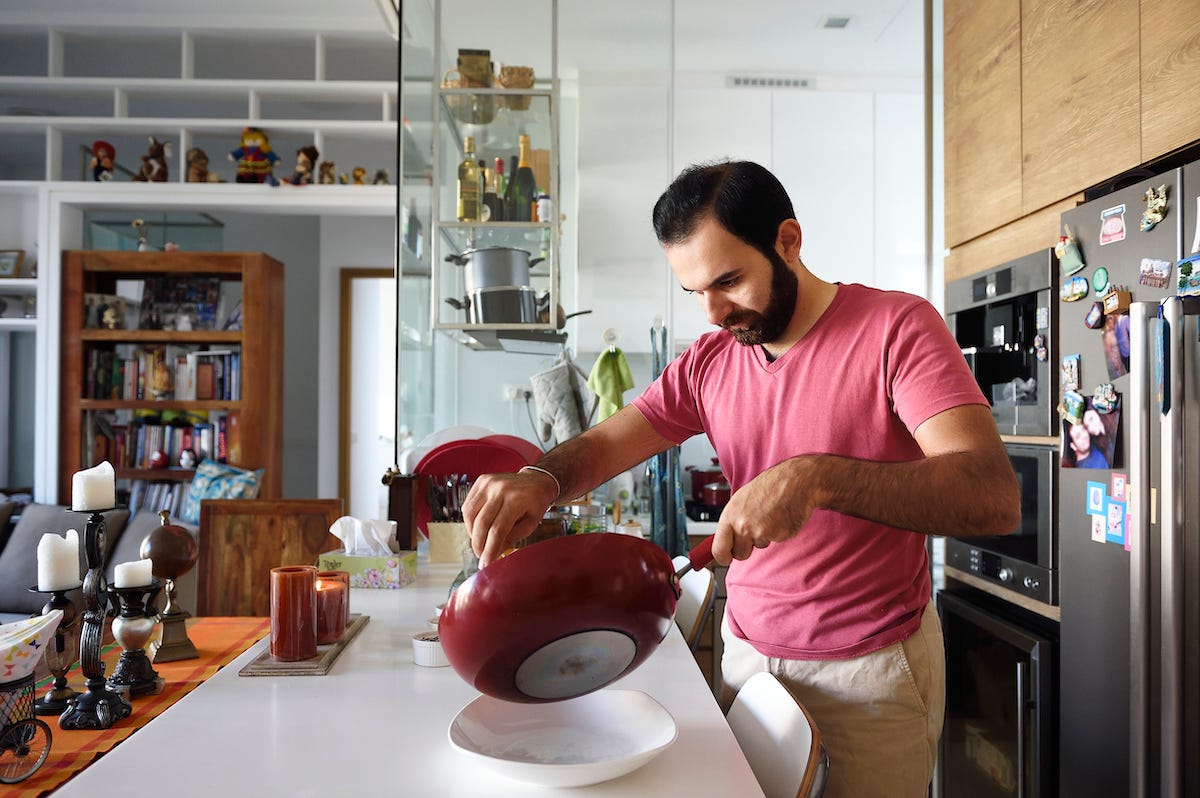 Carlina Teteris / Getty ImagesIf you don’t have mackerel, sardine works with this too.

Masaki Sugisaki, Executive Chef at Dinings SW3 in London, notes in his recipe that mackerel and miso are both known as immune system boosters (sardine works too). Both ingredients are also preservable.

– Prepare Miso sauce. Place all ingredients in saucepan and bring them to boil. – Once boiled, reduce the heat and gently simmer for two minutes. Keep stirring to dissolve sugar. – Drain the water from tinned mackerel, break the jacket fillet into rough chunks. – Place mackerel into a small pan and gently heat up over medium heat. – Add three tablespoons of miso sauce and mix well. – Once heated, place it on steamed rice. – Finish with chopped spring onion, sesame oil, and Shichiri pepper.