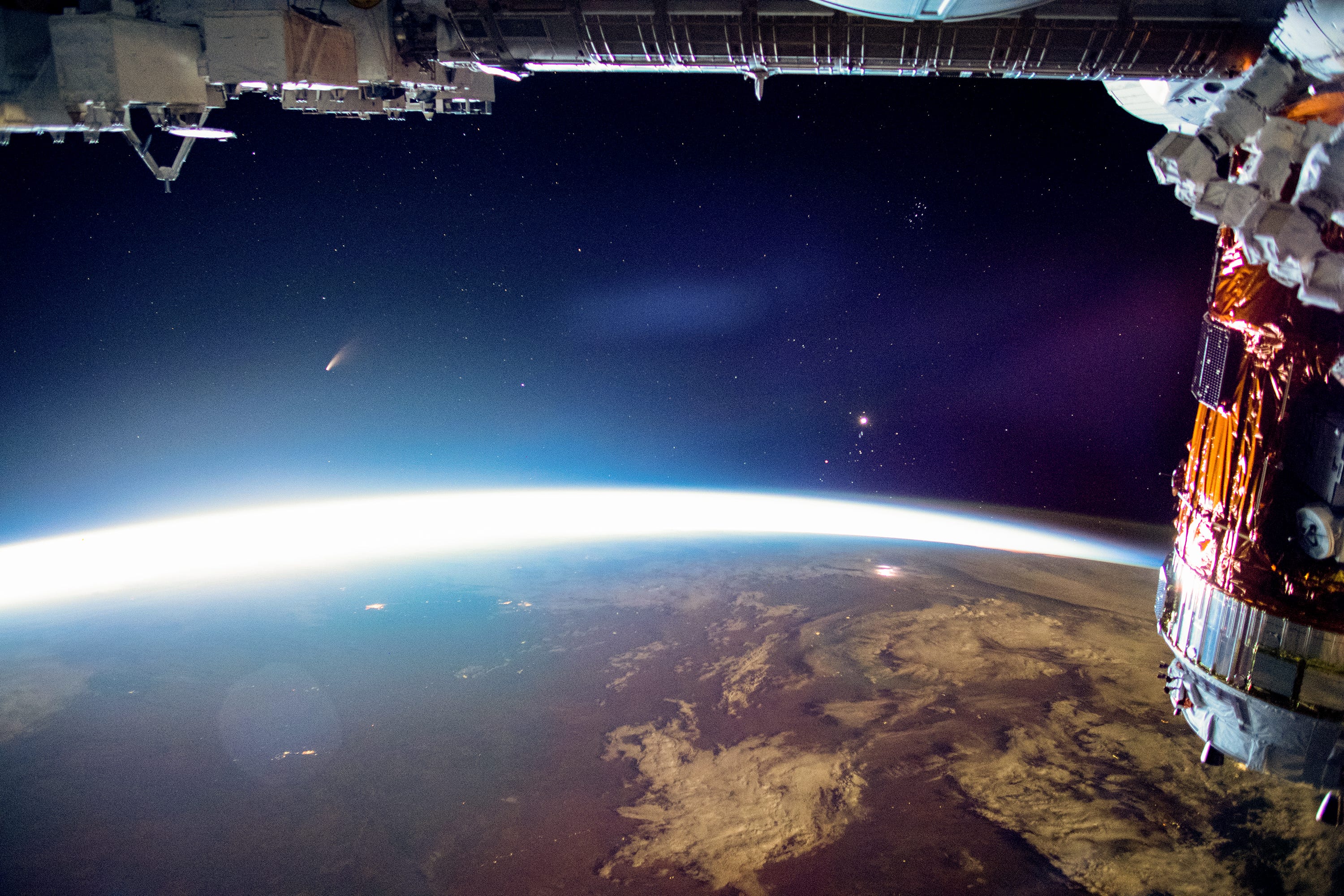 NASAA photo taken by an astronaut aboard the International Space Station on July 5 shows Comet Neowise, on the left, rising above the limb of planet Earth during an orbital sunrise.

In the darkness of orbital night on July 5, a NASA astronaut floated up to a window on the International Space Station, gazed toward the limb of Earth, and patiently waited for a cosmic spectacle.

As the space station careened over the Middle East, the recently discovered Comet Neowise and its twin glowing tails rose above the predawn horizon. Then – almost as quickly as the dust-and-gas-sputtering space rock appeared – it faded into the blinding glare of the sun.

“Right before the sun came up, that comet became visible during that short period of time when it was still close to the sun, but the sun was still hidden by the Earth,” the NASA astronaut Bob Behnken, who recently launched to the ISS aboard SpaceX’s new Crew Dragon spaceship, told The New York Times’ “The Daily” podcast from orbit on July 7. “It was just an awesome sight to be able to see.”

Fortunately for us all, we don’t have to risk our lives rocketing to space to see such a scene, or even imagine it: Behnken and his colleagues recorded hundreds of photographs, which the UK-based graphic artist Seán Doran (who regularly processes space-agency imagery) downloaded from a NASA image archive and then edited into a breathtaking time-lapse movie.

“Grab a cold beverage, turn off the lights, get undressed, get comfortable and pop this on the big TV,” Doran tweeted Thursday with a short cut of the video, adding: “Consume whilst drinking.”

Though Doran initially shared a version of the video sped up four times, he later uploaded an ultra-high-definition 4K video to his YouTube channel that shows the sequence in real time.

The sequence consists of 550 long-exposure photos taken over seven minutes, Doran told Business Insider in an email. Normally, that would provide just 18 seconds of video, so he interpolated the pictures to fill in frames, smooth out the sequence, and create a seamless playback experience.

This result gives viewers of the film (below) a sense of what it’s like to be aboard the space station while flying 250 miles above Earth at a speed of 17,500 mph and see a comet rise.

Look now: Comet Neowise won’t be back for millennia

On July 3, Comet Neowise swung by the sun about 10 million miles closer than Mercury’s orbit. Along the way, the 3-mile (5 kilometre) ice ball heated up enough to spray out two tails, one made of gas and the other dust, that stretch millions of miles into space.

The comet is expected to make its closest approach to Earth on July 23, when it’s about 64 million miles away, according to calculations by NASA JPL. Astronomers expect it to be visible to the naked eye on a dark night through early August. 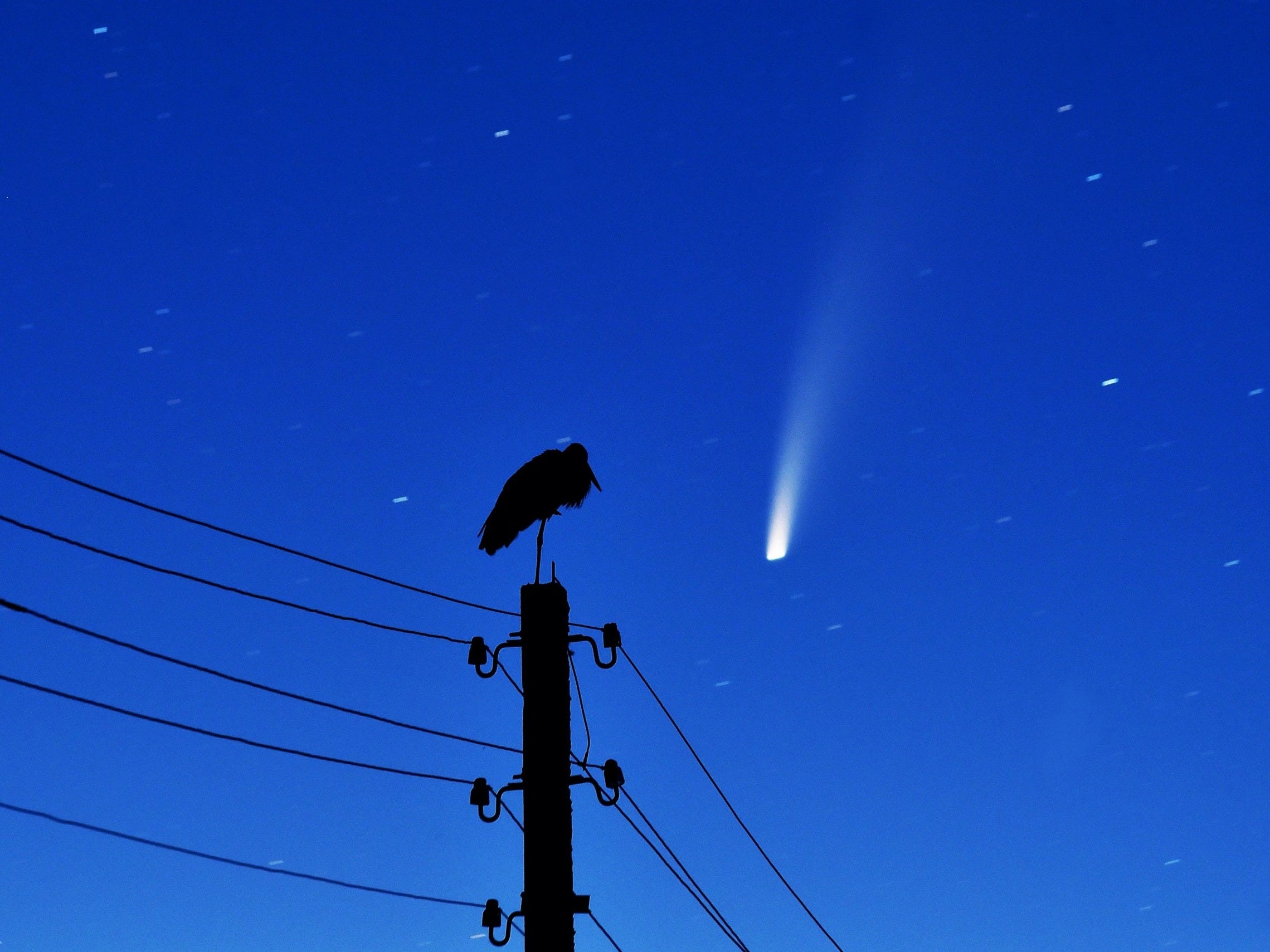 Sergei Gapon/AFP via Getty ImagesA stork on a power-line pillar as the comet C/2020 F3, known as Neowise, was seen in the sky above the village of Kreva, northwest of Minsk, Belarus, early on Monday.

But Comet Neowise isn’t sticking around, nor will it make a return in our lifetimes: The object is zooming toward the outer fringes of our solar system, and it won’t return to the inner solar system for about 6,768 years.

To see the comet yourself, wake up before dawn and look toward the sky close to the horizon. From this Tuesday to Sunday, though, Space.com reports, the comet will have its best “prime time” viewing hours in the evening about 80 minutes after sunset.

On Monday, several amateur astronomers reported the comet as possibly fragmenting, or breaking up, which is not unusual for a rock that’s held together by frozen gasses, dust, and grit. Researchers contacted by Business Insider debunked that idea, however, saying telescope mount or photography mistakes led to what looks like (but is not) a fragmenting comet.

“I have seen a picture taken a few hours ago … and the comet looks healthy,” Quanzhi Ye, an astronomer at the University of Maryland, told Business Insider in an email Monday. “So no, no clear evidence that the comet is fragmenting, as far as I know.”