Chamath Palihapitiya’s Clover Health surged as much as 36% on Friday after adding former Trump official Demetrios Kouzoukas to its board of directors.

Vivek Garipalli, Clover’s CEO, said in a statement that Kouzoukas “understands the opportunity and challenge of operating at scale” and that “he has an encyclopedic knowledge of Medicare rules and regulations, combined with an incredibly astute business and strategy acumen,” per Yahoo Finance.

The addition of Kouzoukas is big news for Clover Health because much of the company’s ambitious growth plans rely on the CMS’ direct-contracting program, according to a pitch to investors which was presented before Clover’s $3.7 billion deal with one of billionaire investor Chamath Palihapitiya‘s SPACs in January.

In that pitch, Clover said it expects to manage up to $1.1 billion in medical expenses and care for 200,000 seniors through the direct contracting program in 2021, and predicted that figure will grow to 450,000 seniors by 2023.

The company also plans to increase its membership nearly five-fold this year as a result of the new federal program meant to lower costs for Medicare and encourage risk-sharing.

The direct-contracting program kicked off April 1 and 53 entities were included as Direct Contracting Entities, including Clover Health.

Now, with the addition of Kouzoukas to the board, investors could be thinking that Clover’s expectations to care for 200,000 seniors and manage over $1 billion in medical expenses through the CMS program are set to become a reality.

However, despite the recent rise in share prices, Clover Health is still trading below well below its Nasdaq opening price of $15.30. It has traded below that price since a high-profile short-seller report from Hindenburg Research that alleged the company is a “broken business” facing an active, undisclosed DOJ investigation.

The law firm Wolf Popper LLP echoed many of the claims in that report on March 18 when it filed multiple federal securities class action lawsuits in the US District Court for the Middle District of Tennessee against Clover Health.

The law firm said Clover Health has made repeated “false and misleading statements” to investors.

Still, the firm does have some support from analysts at CitiBank who hold a “buy” rating and a $19 price target for the stock. 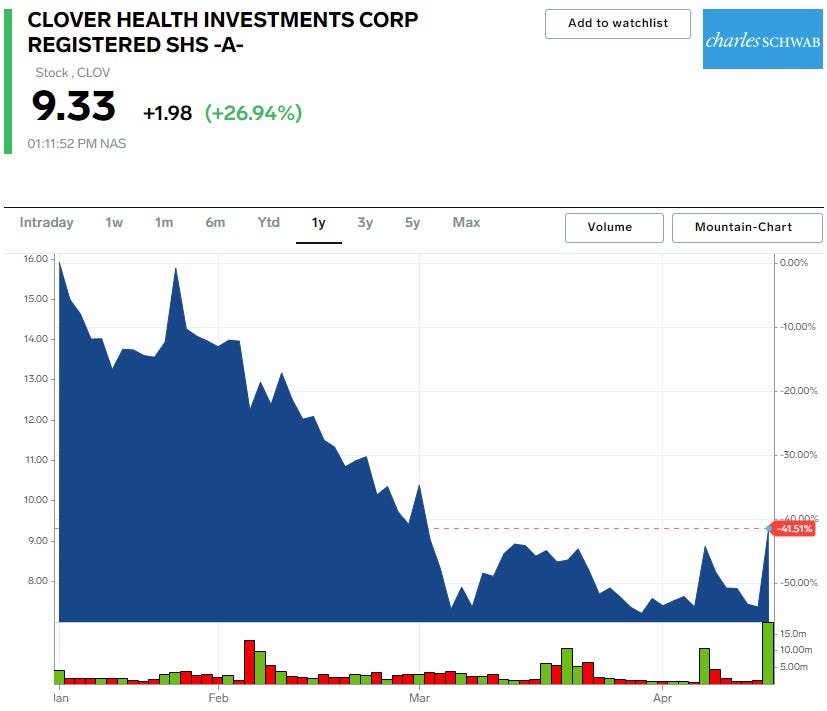