After buying a 19th-century church in Chicago for $1.1 million, a couple turned it into a private home and an event space for the community 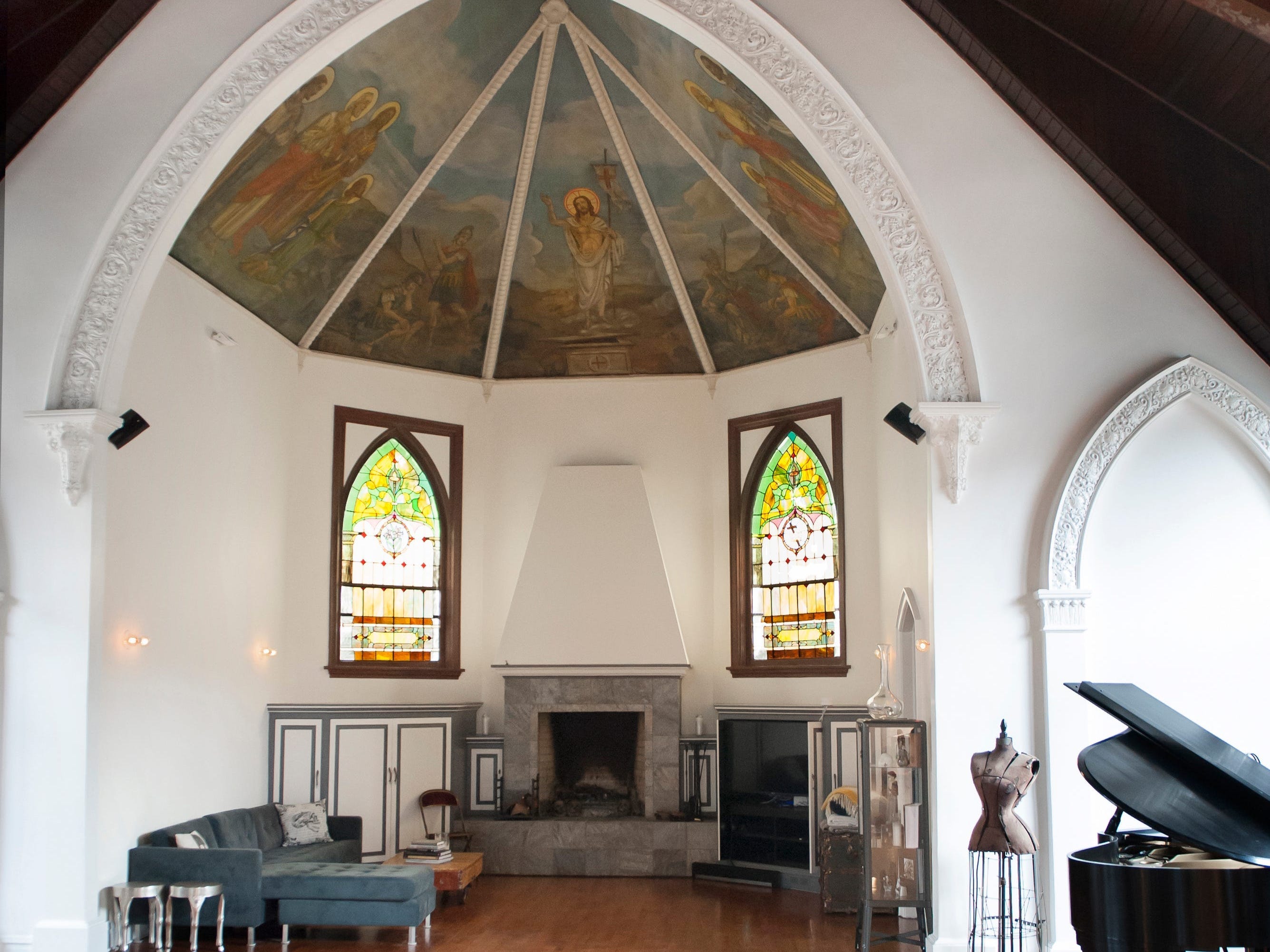 When a couple stumbled upon a former church in Chicago, they instantly knew they’d found their new home.

Jim Jacoby and Molly Currey purchased a former Catholic church that dates back to 1888. Now, they’re living in it full time, while also welcoming the local community into the restaurant they built in the basement.

Keep reading to find out how they turned a former house of worship into their living space.

Having both just gotten out of marriages, Jim Jacoby and Molly Currey were in a time of transition when they stumbled upon the church in Chicago in 2017. 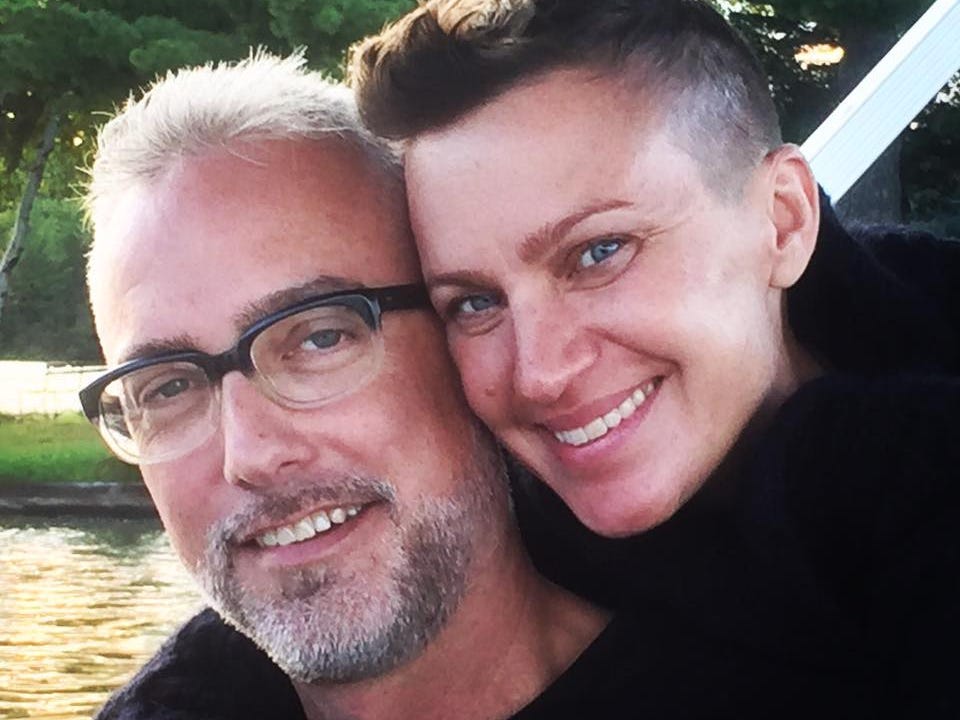 The had couple toyed with the idea of living in a unique building in the future, but as they had just gone through divorces, they felt like they weren’t in the market. That didn’t stop them from looking through Zillow, however, and while perusing the real estate site one day, a church in Logan Square popped up.

“We thought it would be funny to go look at a church,” Jacoby said. “The minute we walked up the stairs, we were like, ‘Oh s—.’ The church found us just as much as we found it.”

Jacoby said they were instantly drawn to the energy of the building, which dates back to the 1800s. 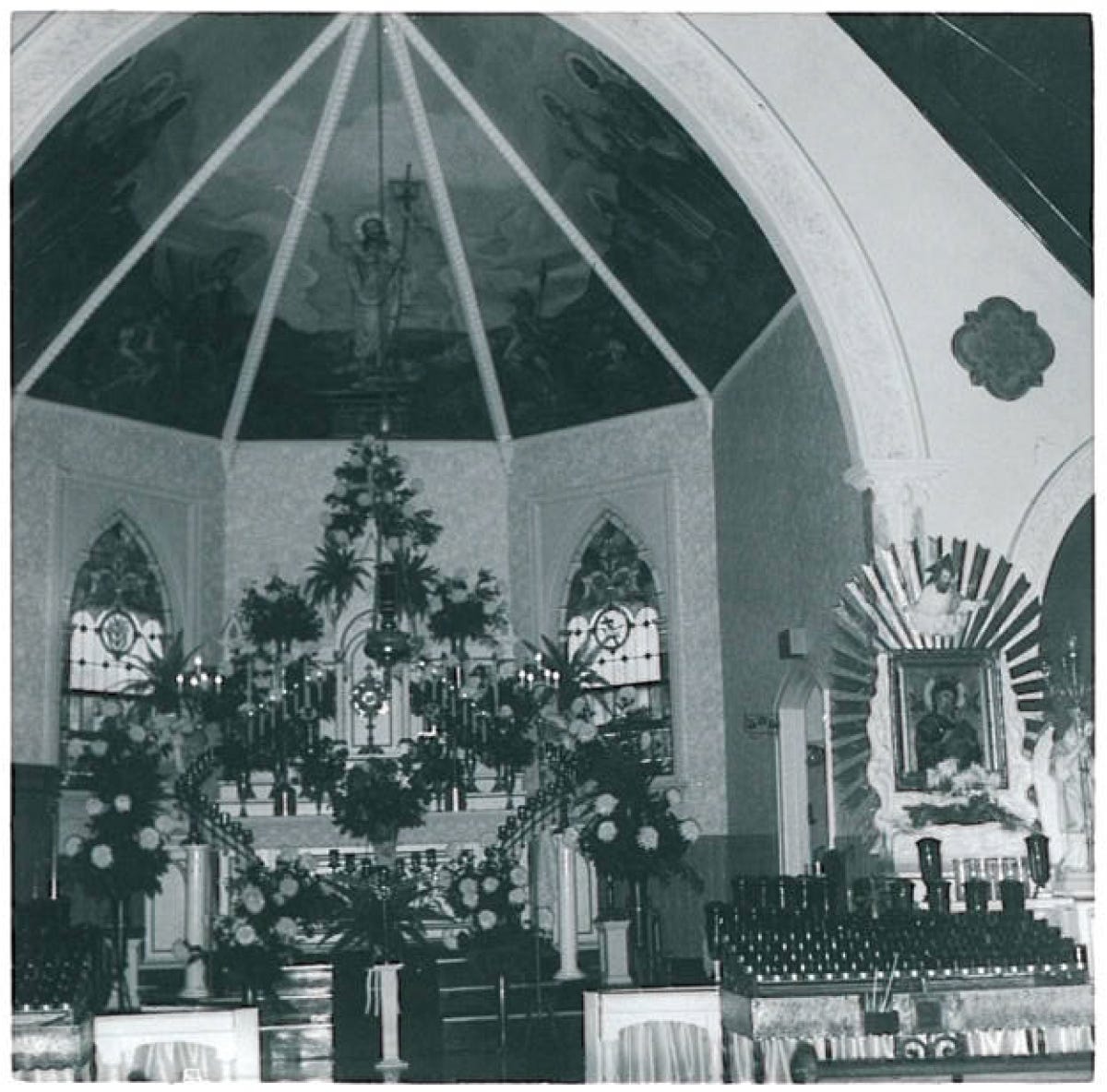 Courtesy of Petra Ford for Paper and Pate PhotographyThe church while in operation.

“This could sound a little weird, but the energy in the space was very quiet and peaceful,” he said. “The last incarnation of the church was a school for the deaf under the Catholic administration, so I think some of that energy might have lingered.”

Construction on the church began in 1888 and was completed two years later. Episcopalians built the church with very little ornamentation. Jacoby calls it a “utilitarian” build, but Catholics bought it in the 1930s and renovated it. At the same time, the church was raised to include a substructure. It expanded the original crawl space into a 12-foot basement, which Jacoby and Currey find useful today. 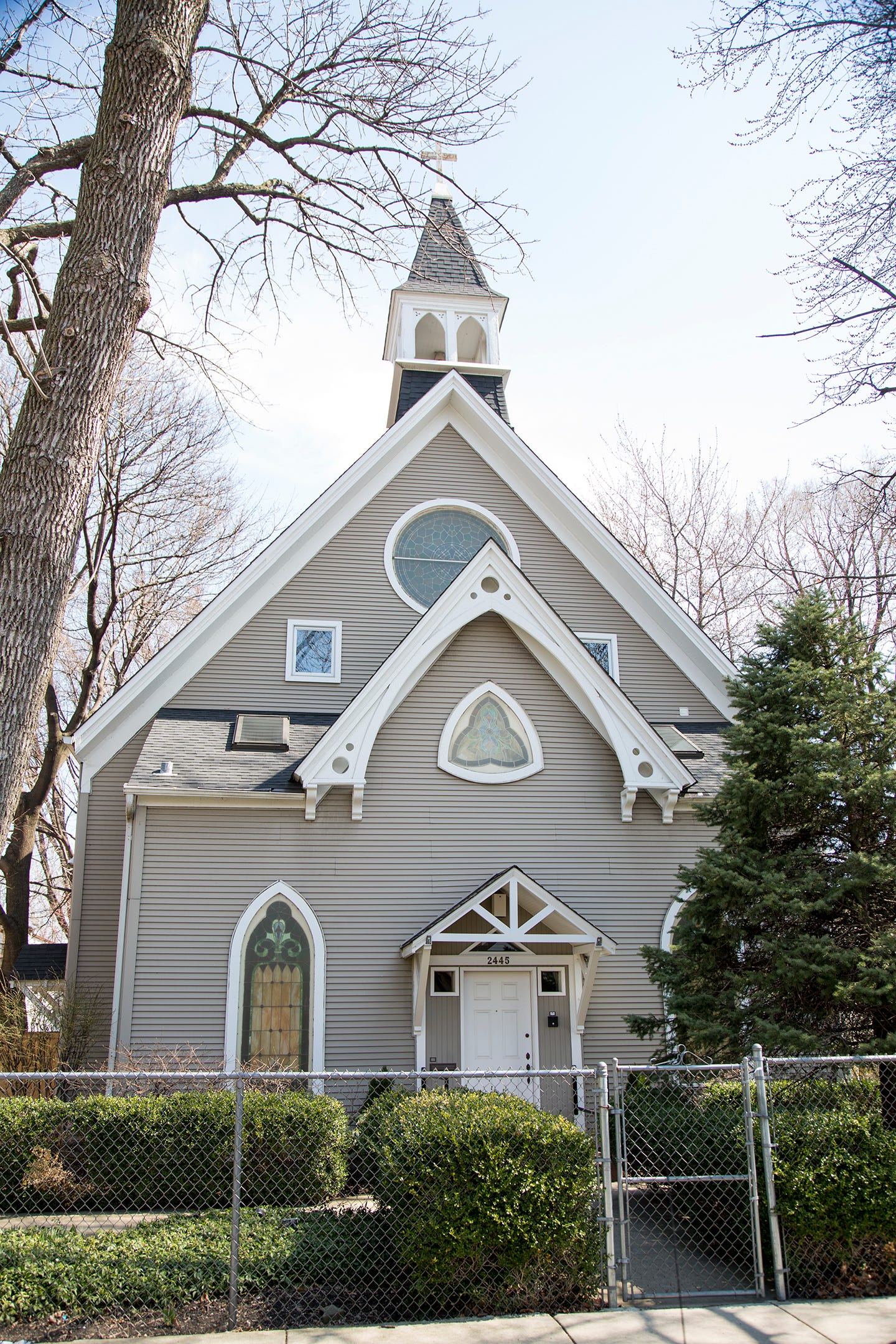 Courtesy of Petra Ford for Paper and Pate PhotographyThe exterior of the church today.

The previous owners converted the 6,000-square-foot living space into three bedrooms and two bathrooms, but Jacoby and Currey put their own personal touches into the building.

The church’s main altar has been transformed into the couple’s living room. 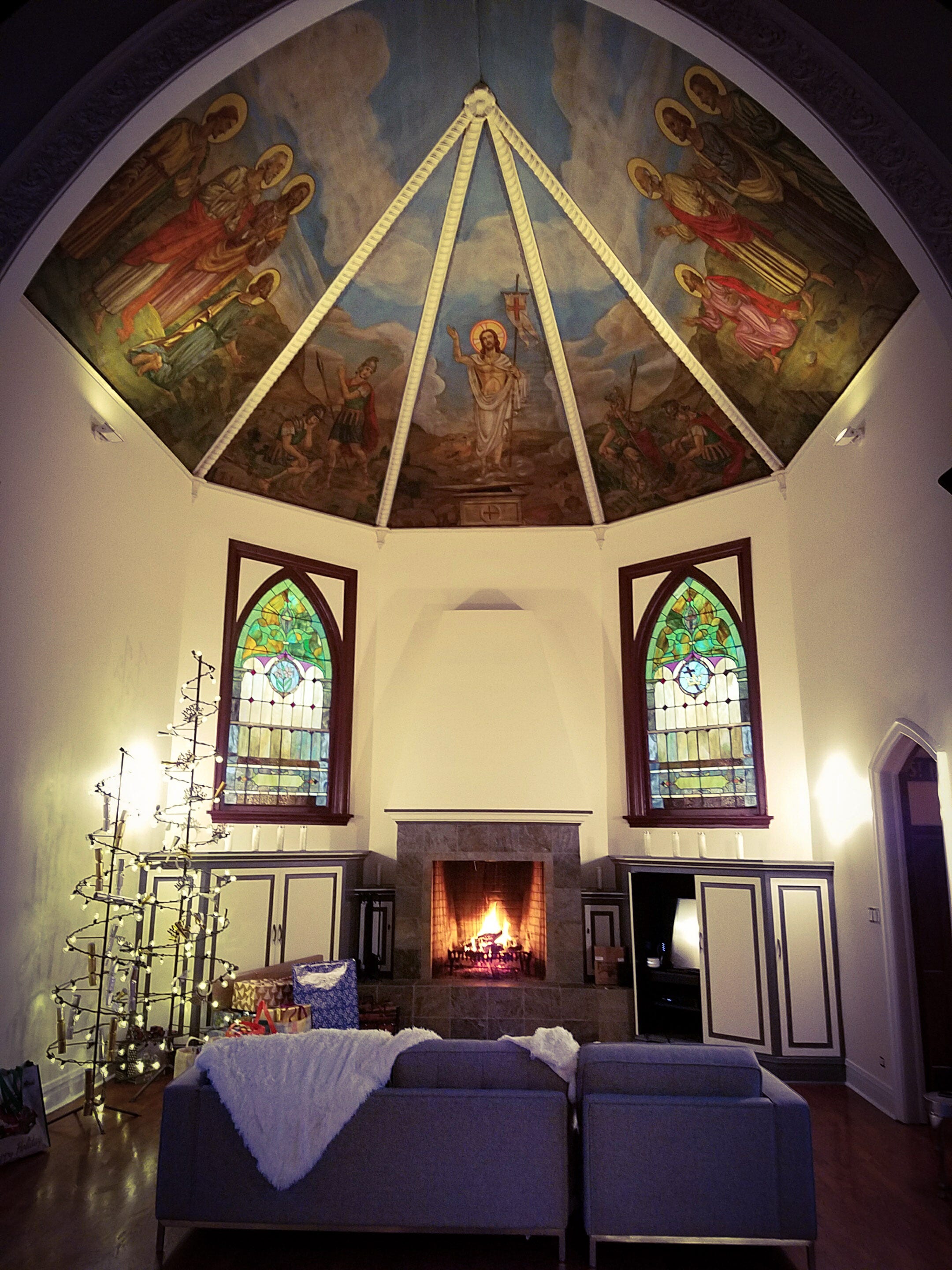 Jacoby said this is his favourite space in the house because of the elements that still remain. The altar, for example, still has the original fresco, which is painted onto a canvas and then hung on the ceiling. Plus, there are two stained-glass windows that hint at the building’s past.

The best part, Jacoby said, is seeing people react to the space.

“We love seeing the home through other people’s eyes,” he said.

The pews that were once in front of the altar have been removed, and the space has been turned into an open floor concept. 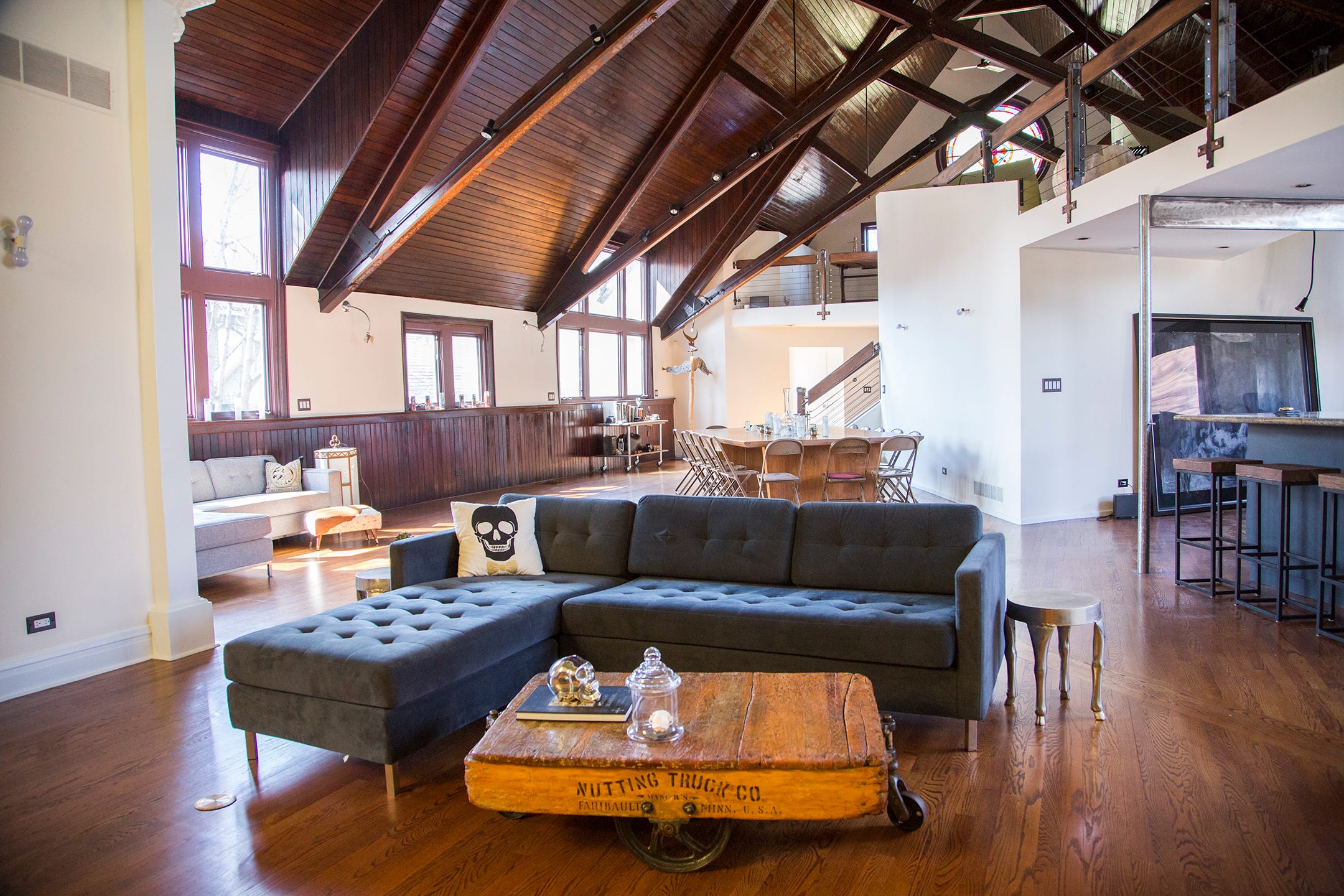 The couple added additional seating and decorated in what Jacoby calls their “modern eclectic” or “weird” design style.

The kitchen is next to the former altar and is filled with modern amenities. 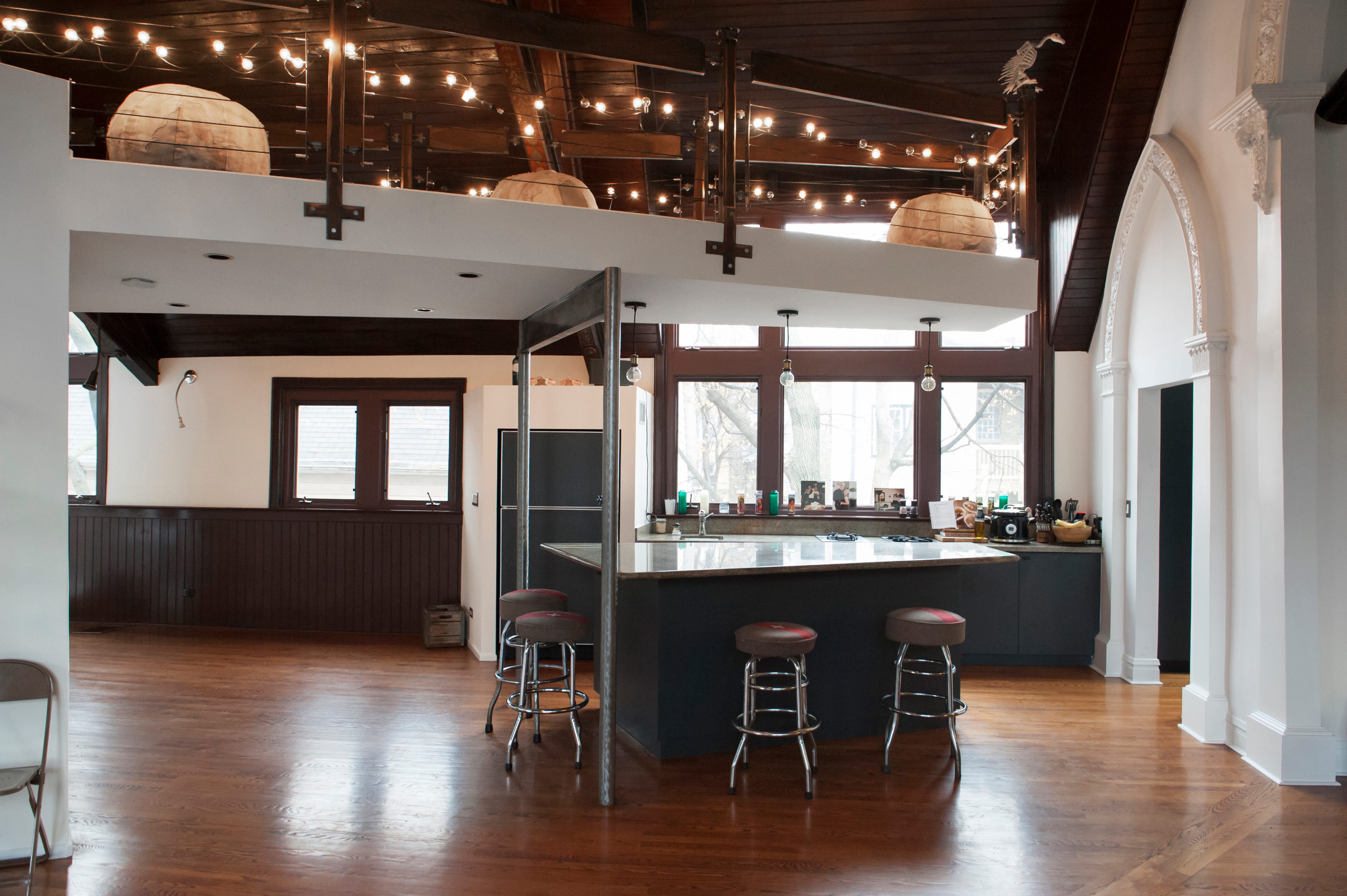 Courtesy of Petra Ford for Paper and Pate PhotographyThe kitchen.

The kitchen has plenty of counter space, including an island that can seat four.

There’s even more kitchen space through an ornamental archway. 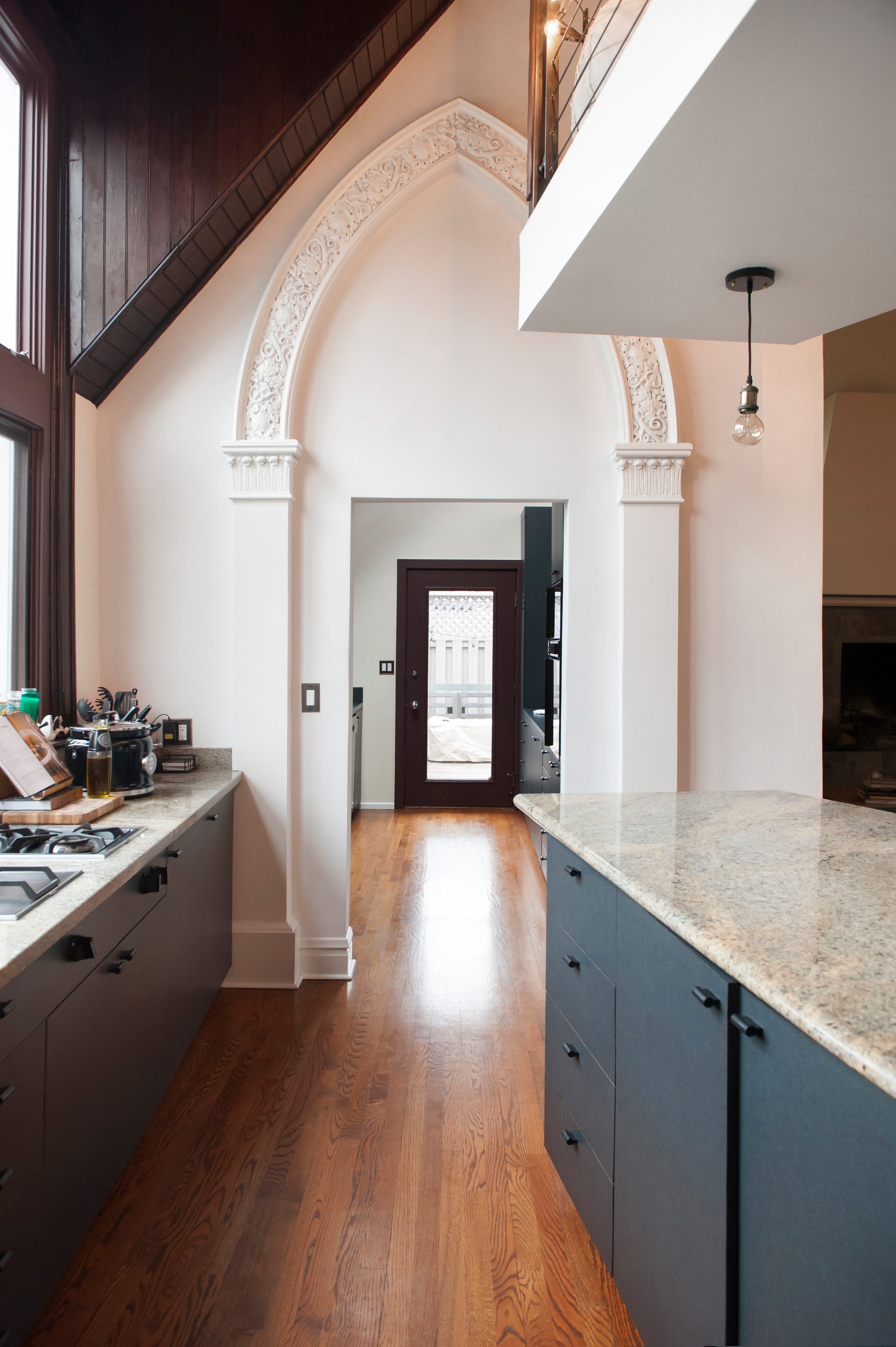 Courtesy of Petra Ford for Paper and Pate PhotographyThe kitchen.

Through the archway, there is additional counter space, more cabinetry, skylights, and access to outdoor space.

The master bedroom is located behind the dining area and next to the kitchen. 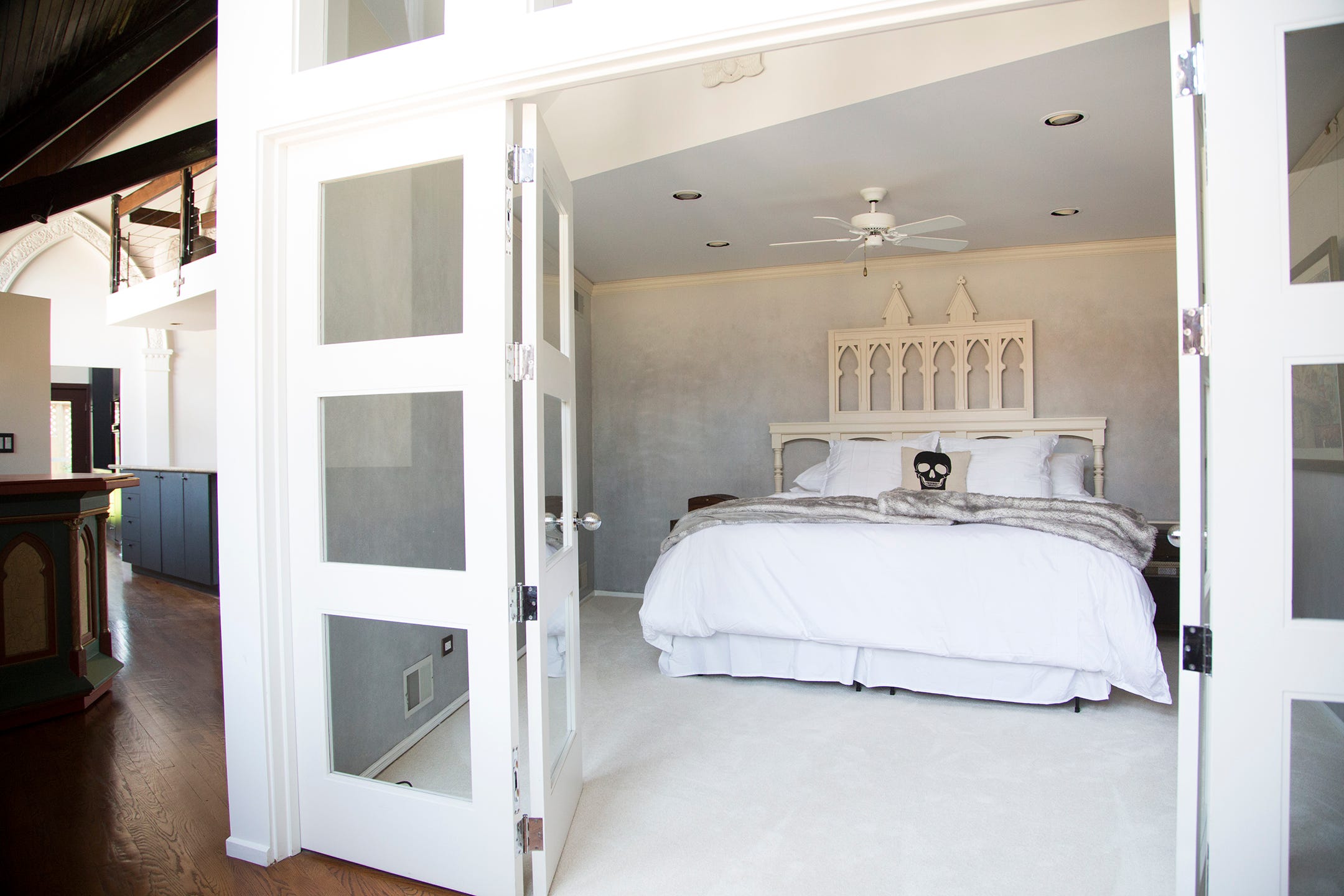 Glass doors open up into a private bedroom where the headboard is actually part of the church’s original altar.

Above the master bedroom sits a loft that houses two additional bedrooms.

Courtesy of Petra Ford for Paper and Pate PhotographyThe stairs lead to the loft.

Currey’s two children live in the church part-time and use the lofted bedrooms. Jacoby said it’s the perfect space for them.

There are religious symbols and figurines placed throughout the home as a nod to the building’s history. 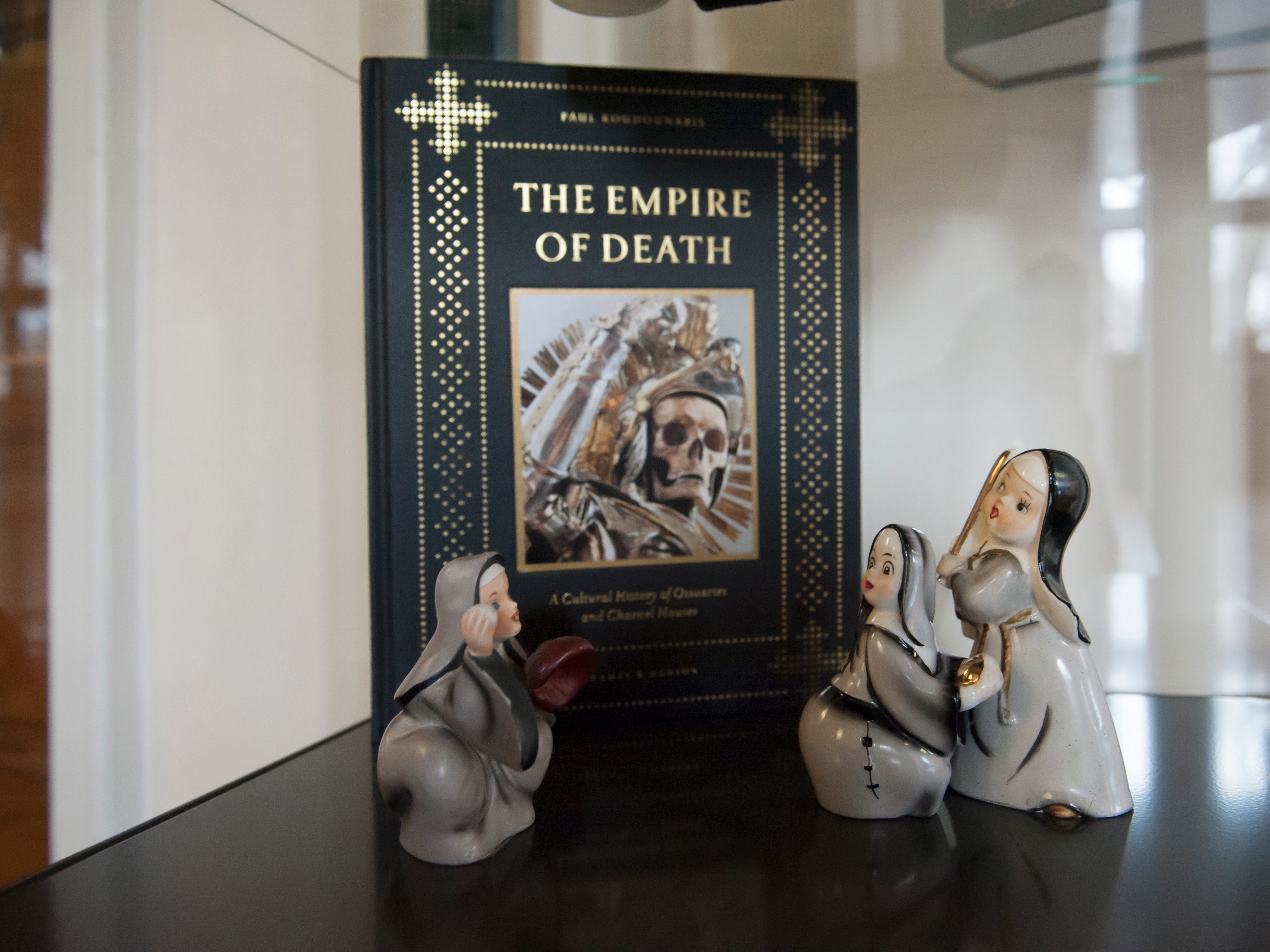 Courtesy of Petra Ford for Paper and Pate PhotographyFigurines in the house.

“To us, the building represents a space where people were challenged to think and challenged to reflect,” Jacoby said. “For us, it’s important to continue that. We do definitely honour that. We don’t want to disrespect it, but we do want people to think about it. In other words, what [does] a space like this mean in the 21st century where religion isn’t nearly as central to our lives as it used to be. The church ran services seven days a week in its heyday, and the neighbours went to church here, so we look for ways to share the space.”

To further honour the church’s history, Jacoby and Currey have opened up their home to the community as an event space. 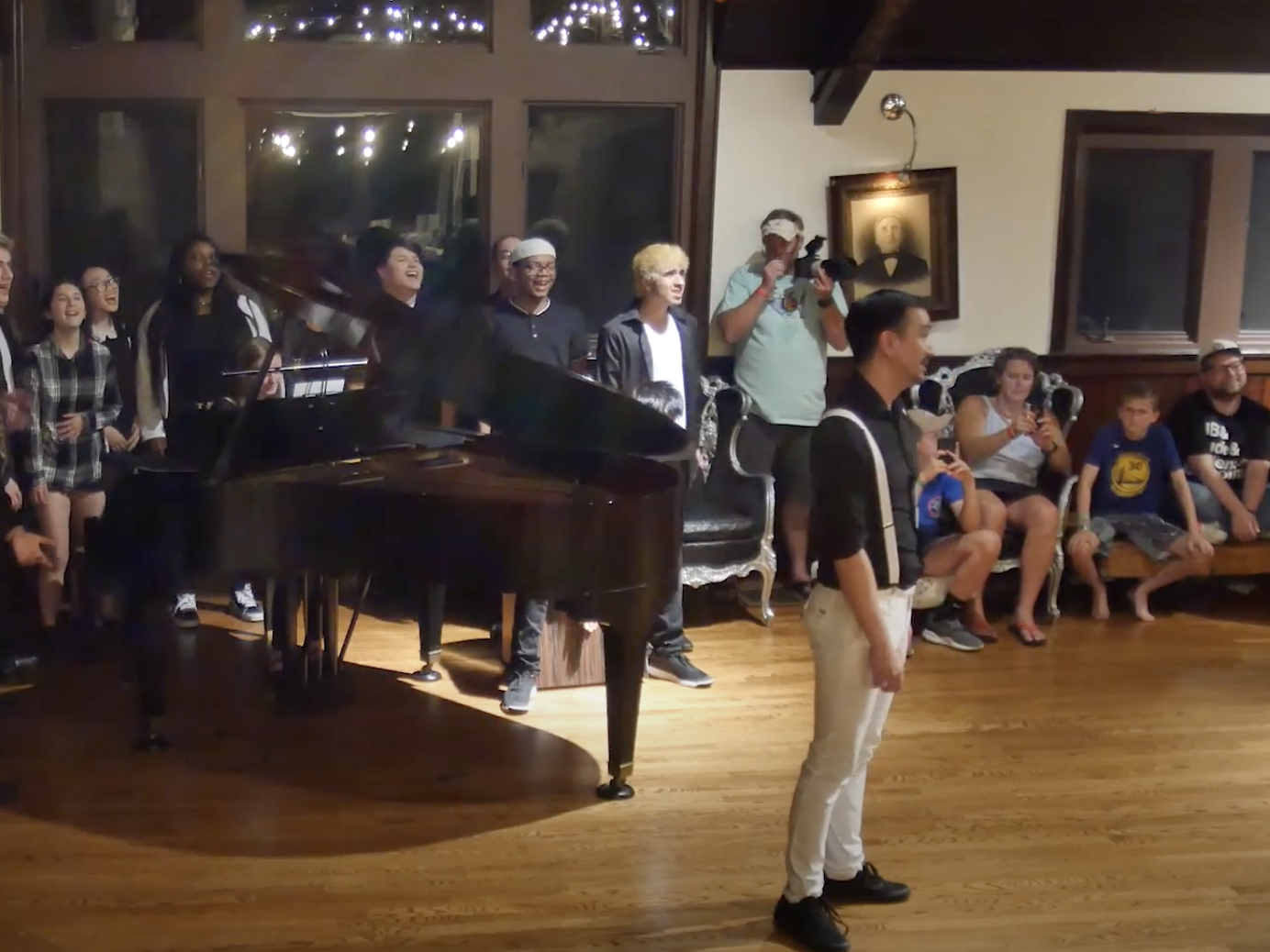 Courtesy of Jim JacobyA performance in the living space.

Before the pandemic, the couple hosted 80 to 100 people in their living space once a month for live musical performances.

“We want to continue this as our private residence, but we still want this to be part of the community in a meaningful way,” Jacoby said.

Plus, the couple turned the basement into a restaurant with rotating chefs.

The couple opened the restaurant – known as Saint Emeric – to host dinners and shows three times per week with the help of a house chef. They also welcome visiting chefs to host a residency; the chefs can even sleep in a private room in the basement.

“We had that rolling pretty hot and heavy right up until the pandemic hit,” Jacoby said.

However, Saint Emeric does not welcome walk-ins. To dine and enjoy a show at the restaurant, you have to sign up to the private club on their website to book a table, Jacoby said.

In February 2020, the couple bought the rectory next door and remodeled it during the pandemic to bolster their connection to the community.

“We want to connect the rotary to the larger property in a more meaningful way,” Jacoby said.

As the couple continues to make a name for themselves in the community, they hope to continue to call this place their home.

Courtesy of Petra Ford for Paper and Pate PhotographyThe exterior of the church.

“The biggest challenge is not oversharing it so that we still have it as our private space, and it feels personal to us,” he said.

But they have no plans to slow down when it comes to renovations and growing.

“This building defines who we are,” he said. “Neither one of us can imagine a life where we didn’t find this place. We couldn’t imagine living without it. It defines who we are and how we interact with the world. We are leaving here feet first.”