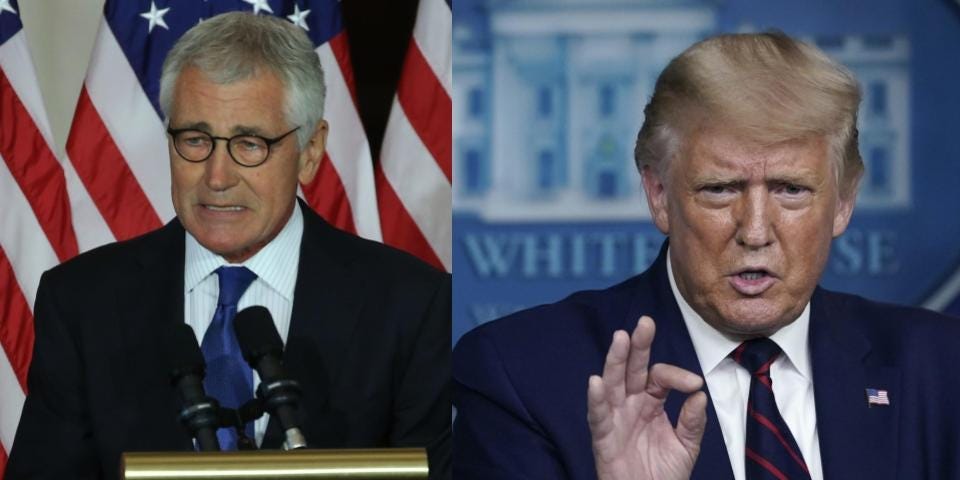 Former Secretary of Defence Chuck Hagel said in a Sunday interview with ABC that The Atlantic’s report that President Donald Trump belittled American veterans “will resonate” with US soldiers because of the president’s track record of deriding Americans who served in the army.

In a report published Thursday, The Atlantic stated that anonymous sources said Trump derided the late former senator John McCain and the late former President George H. W. Bush as “losers” because they were shot down while serving in the US Navy.

Hagel said that the report is in line with Trump’s words and actions “on the record,” which speak to the “credibility of this article.” He pointed out that Trump’s derision of late Senator John McCain, former Defence Secretary Jim Mattis, and retired US Marine Corps general John Kelly are among many of Trump’s track record criticising former American veterans that “corroborates” the report.

Defense Sec. Chuck Hagel says he believes the report that Trump disparaged U.S. soldiers “will resonate” with the military because Trump’s own words and actions "on the record" make "the article and those anonymous comments more and more credible.” https://t.co/ScDveU4dz4 pic.twitter.com/loeHYvDuJ5

NEW: Defense Sec. Chuck Hagel tells @MarthaRaddatz that “you can go through a litany of past things that (Trump) said from his mouth, actions that he’s taken, and it corroborates” the allegations in The Atlantic report that Trump disparaged U.S. soldiers. https://t.co/ScDveU4dz4 pic.twitter.com/YOdVUP6G1n

“Facts are facts,” the former Defence Secretary told ABC News. “I think this is a pretty clear indictment of this president’s attitude towards our veterans.”

A recipient of two Purple Hearts while serving in the Vietnam War, Hagel added that such “despicable” comments are “beneath the dignity of any commander-in-chief.”

“No president has ever done that â€” use your veterans, use your active military as props,” Hagel said on ABC.

Meanwhile, Trump and his supporters have denied the report, slamming its use of anonymous sources. The president furiously lashed out on journalist Jeffrey Goldberg who wrote the article and denied the veracity of the report. On Sunday, he also attacked Laurene Powell Jobs, a major stakeholder in The Atlantic for “wasting money” on a “failing Radical Left Magazine.”

A number of other news outlets and journalists, including Fox News correspondent Jennifer Griffin,The Associated Press, and Business Insider have since corroborated parts of The Atlantic report with sources. Meanwhile, Trump has targeted journalists who have reported on the credibility of this story. On Friday, he tweeted out that Griffin “should be fired for this kind of reporting.”

Business Insider reached out to a spokesperson for The White House for comment.