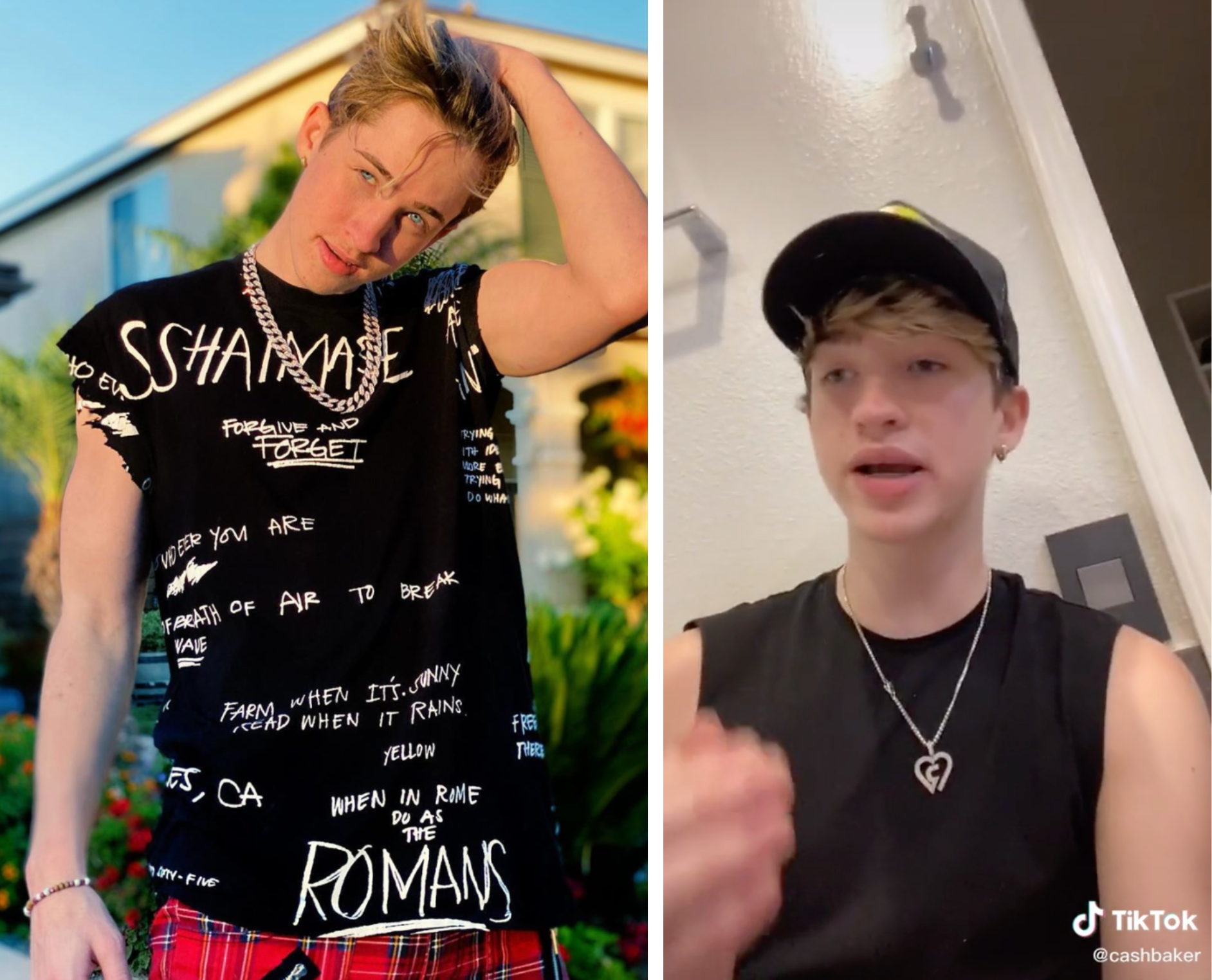 Screenshot Instagram/@cashbaker, TikTok/@cashbakerCash Baker is one of the most popular TikTokers, with more than 16.4 million followers.

One of the most popular TikTokers is reeling from a weekend of backlash after saying in a series of videos last week that he doesn’t support LGBTQ people and non-Christians.

Cash Baker, 17, one of the most popular teens online, is a musician alongside his older brother, Maverick. Together, they have nearly 30 million TikTok followers; Cash has more than 16.4 million.

But on Sunday, he said he’d lost “thousands” of fans and possibly sponsorships with brands.

In his most controversial video, Baker suggested that non-Christians should study the Bible and pray to Jesus

Baker has since deleted his most controversial videos, in which he asked his non-Christian followers to read the Christian Bible and pray to Jesus so they would know Christianity is the only way to go to heaven.

Baker prefaced one video by saying he wasn’t trying to convert anyone, but he went on to ask non-Christians to question their beliefs and follow his if they wanted to avoid spending eternity in hell.

“Guys, all I’m asking you to do is just take a second, take a step back, and really study for yourself,” Baker said.

“If you’re in a religion just because that’s what your parents were, that’s what you were taught, really take a step back and study, and really find out what you believe for yourself.”

Cash Baker fans outraged calling his latest videos homophobic, Islamophobic, anti-Semitic etc. In rants, Cash says he does not support LGBTQ+ community and other religions because of the Bible—rants and reactions in thread. Cash has 16.4M TikTok followers. What are your thoughts? pic.twitter.com/psAe20TN98

Baker mentioned Islam, Hinduism, and Judaism in the videos, which led critics to brand his statements as Islamophobic and anti-Semitic. Baker said that his religion “says that if somebody is worshipping a false god, like, I need to tell them that.”

He also said that any blowback to his videos would mean the critics were disrespecting Christianity. He later deleted the videos.

“If you open up a Christian Bible and start reading it and pray to Jesus, guys, and actually mean it, not trying to prove religion wrong, prove this religion wrong, you actually, truly want to see, I promise you, God will reveal himself to you,”he said.

Cash Baker adds to his rant about other religions. Cash say “If you’re in a religion because that’s what your parents were, that’s what you were taught, really take a step back and study”. pic.twitter.com/sJlomr6IKx

That wasn’t the only controversial stance Baker took while preaching the “gospel” to his followers. He also said in a video that he couldn’t support LGBTQ people.

Though Baker said he loves everybody, his remarks were still characterised as faith-based homophobia, stemming from a belief that being gay is a sin.

Some people reacting to Baker’s videos were quick to point out that many religious people identify as LGBTQ themselves and that many are accepting of other faiths.

@cashbakerI love everyone with all of my heart we are all sinners. I AM ASINNER! We are all the samedd

In follow-up TikToks, Baker said his friends and peers cautioned him about losing money because of his beliefs

Within four days of posting the TikToks, Baker said in a follow-up video that he loves everybody and wasn’t being disrespectful to other religions.

@cashbakerI love you no matter who you are. Sorry that it might of gotMisinterpreted on what I was trying to sayd

He also said his peers and friends cautioned him against making the videos, telling him that he would lose fans and possibly brand deals and sponsorships that allow TikTokers to monetise their content.

“So a lot of my friends and supporters and everyone have been like, ‘Stop preaching the gospel. You’re going to get cancelled. You’re going to lose followers. You’re not going to make money no more. Brand deals aren’t going to want to work with you because you’re too problematic,'” Baker said.

“I mean, that might be true. Like, I’ve already lost thousands and thousands of followers. Brand deals probably won’t want to work with me as much because I’m preaching the gospel and I’m too problematic.”

Baker also said his TikTok views had decreased significantly. He estimated that he received more than 1 million views per TikTok before he posted the videos but that his views had since fallen to about 200,000 to 300,000 per video.

“I know it’s going to make a lot of people hate me for preaching the gospel. But guys, I’m just trying to preach the truth and what the Bible says, guys,” Baker said. “I only do all this because I love you guys.”

He also suggested, however, that his non-Christian and LGBTQ viewers would end up in hell.

“Tell me this: If you believed in a hell, and you believed that some of your family and some of your friends, even people you don’t know, might go to hell and burn in hell for the rest of eternity, would you tell them about it, or would you just stay quiet and not say anything? You would most likely tell them about it, right?” Baker asked his viewers. “And that’s what I’m doing.”