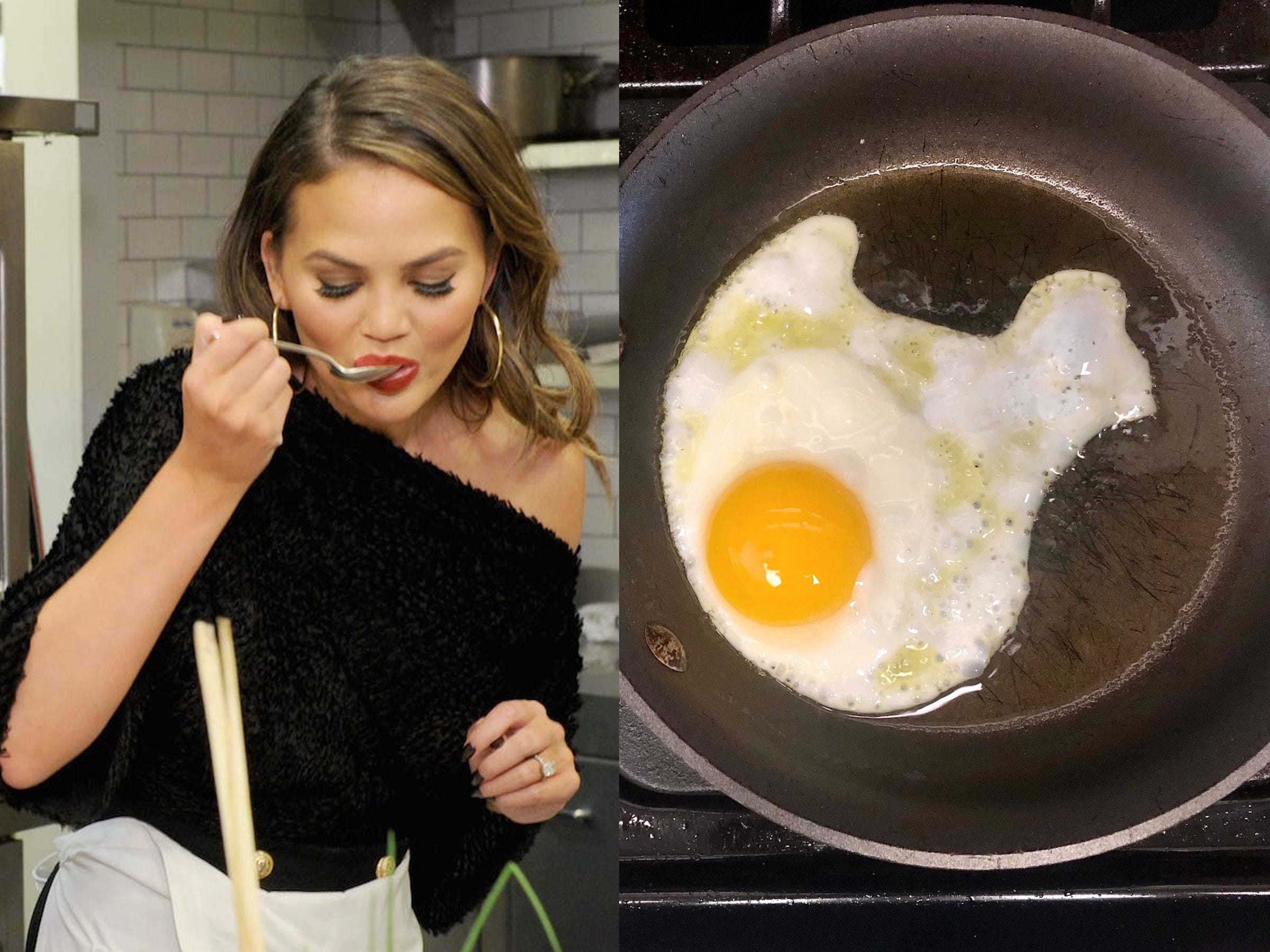 Craig Barritt/Stringer/Getty Images/Anneta Konstantinides/InsiderMany on Twitter criticised Chrissy Teigen’s technique for frying eggs, so I decided to put it to the test.

Chrissy Teigen recently kicked off a heated debate when she posted a video about cooking eggs.

The short clip, which Teigen dubbed the “perfect sunny eggs tutorial,” showed that the cookbook author uses olive oil to fry her eggs â€” much to many of her followers’ dismay.

I was shocked that so many people were against Teigen’s technique. And so, never one to say no to an eggs-periment, I put her preferred olive-oil method up against butter, which Twitter critics claimed was far superior when it came to frying eggs.

Chrissy Teigen made headlines after demonstrating how she cooks sunny-side up eggs. 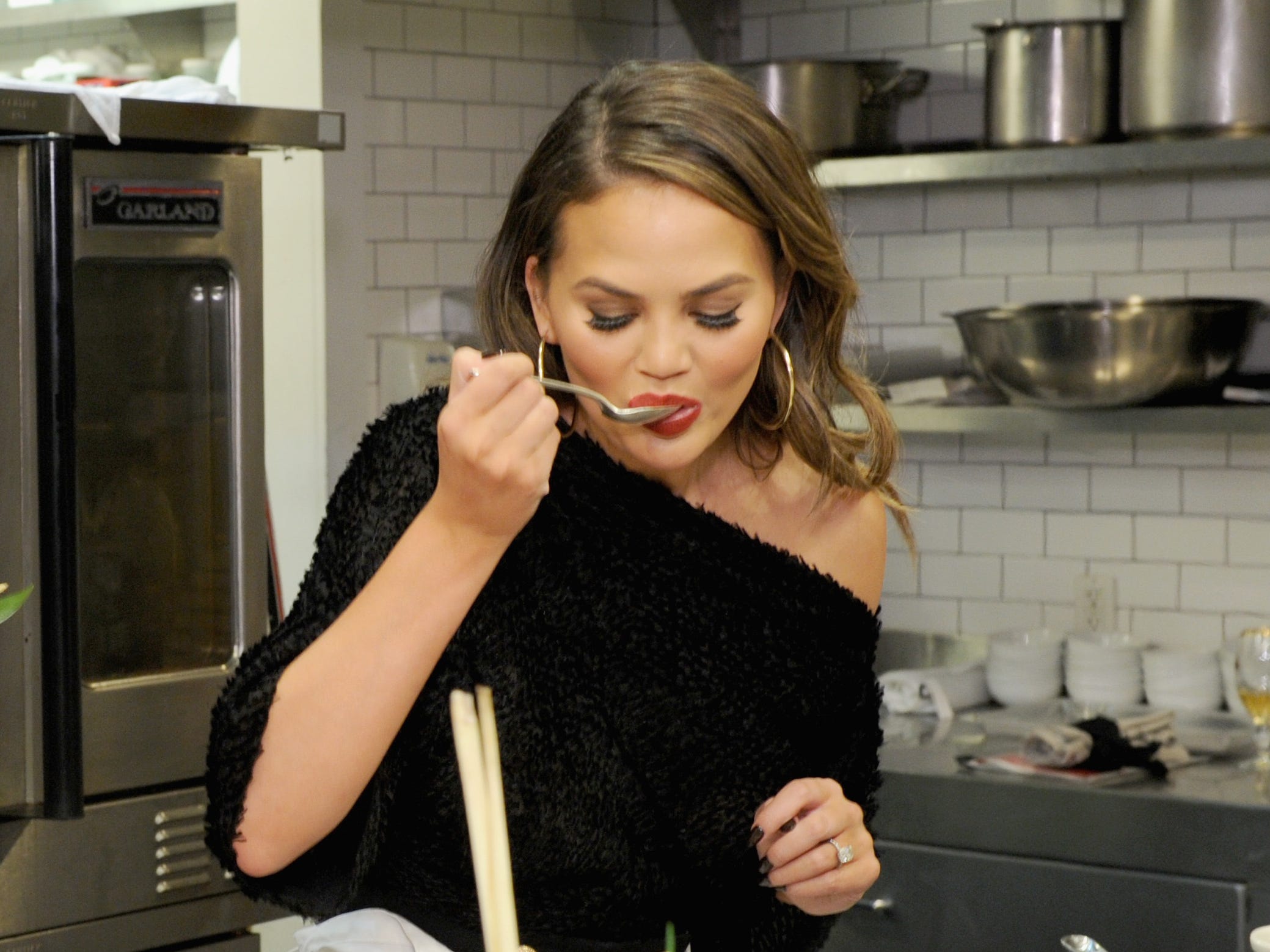 The clip, which has since racked up more than 1.7 million views, shows Teigen placing a nonstick pan on medium heat and adding a thin layer of olive oil.

After adding her eggs, Teigen puts a lid over the pan while they cook. When the eggs are almost done, she seasons them with some salt and pepper.

Many on Twitter were appalled that Teigen had cooked her eggs in olive oil instead of butter. 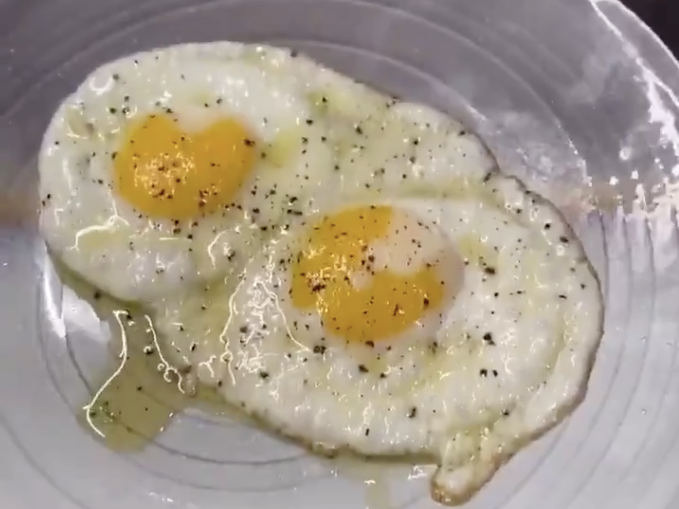 One user said the eggs would “taste like s— with olive oil,” and that it was a “rookie mistake” not to use butter. Another told Teigen to “use a good butter” because it “tastes a lot better.”

But she soon found a supporter in famous Michelin-starred chef José Andrés.

Those are probably the best ever(and looking like tasty!)sunny side eggs ever filmed! What is he talking about?….@chrissyteigen keep it up! https://t.co/lr0K3tPuJf

There are clearly some strong opinions surrounding fried eggs, so I decided to put Teigen’s Michelin-approved technique to the test.

I already had all the ingredients I needed to test Teigen and Twitter’s egg hacks. 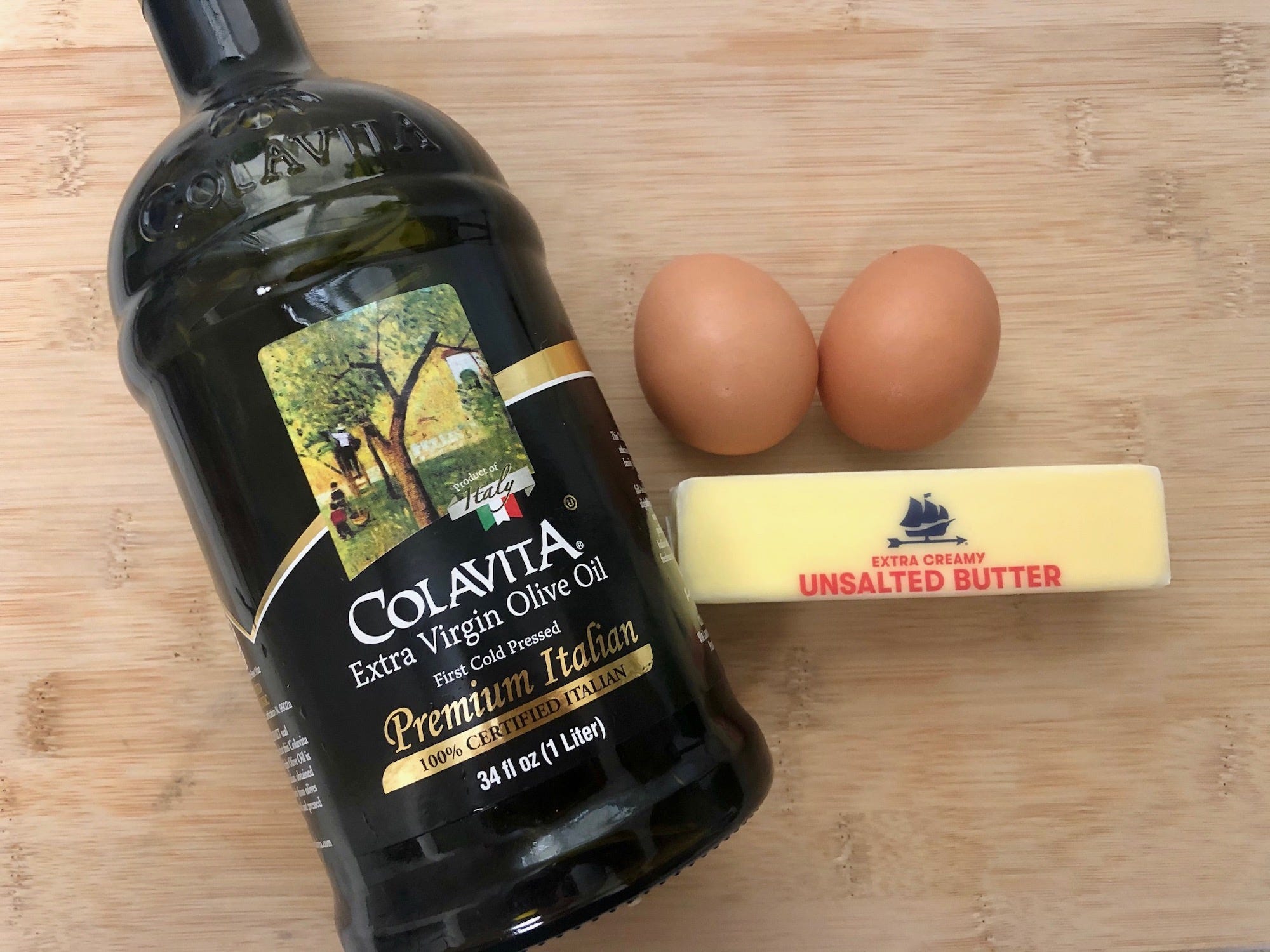 Anneta Konstantinides/InsiderI put eggs made with olive oil and butter head to head.

All I needed were a few eggs, some olive oil, and butter.

I decided to start with olive oil first, since it’s what I already use to fry my own eggs every day. 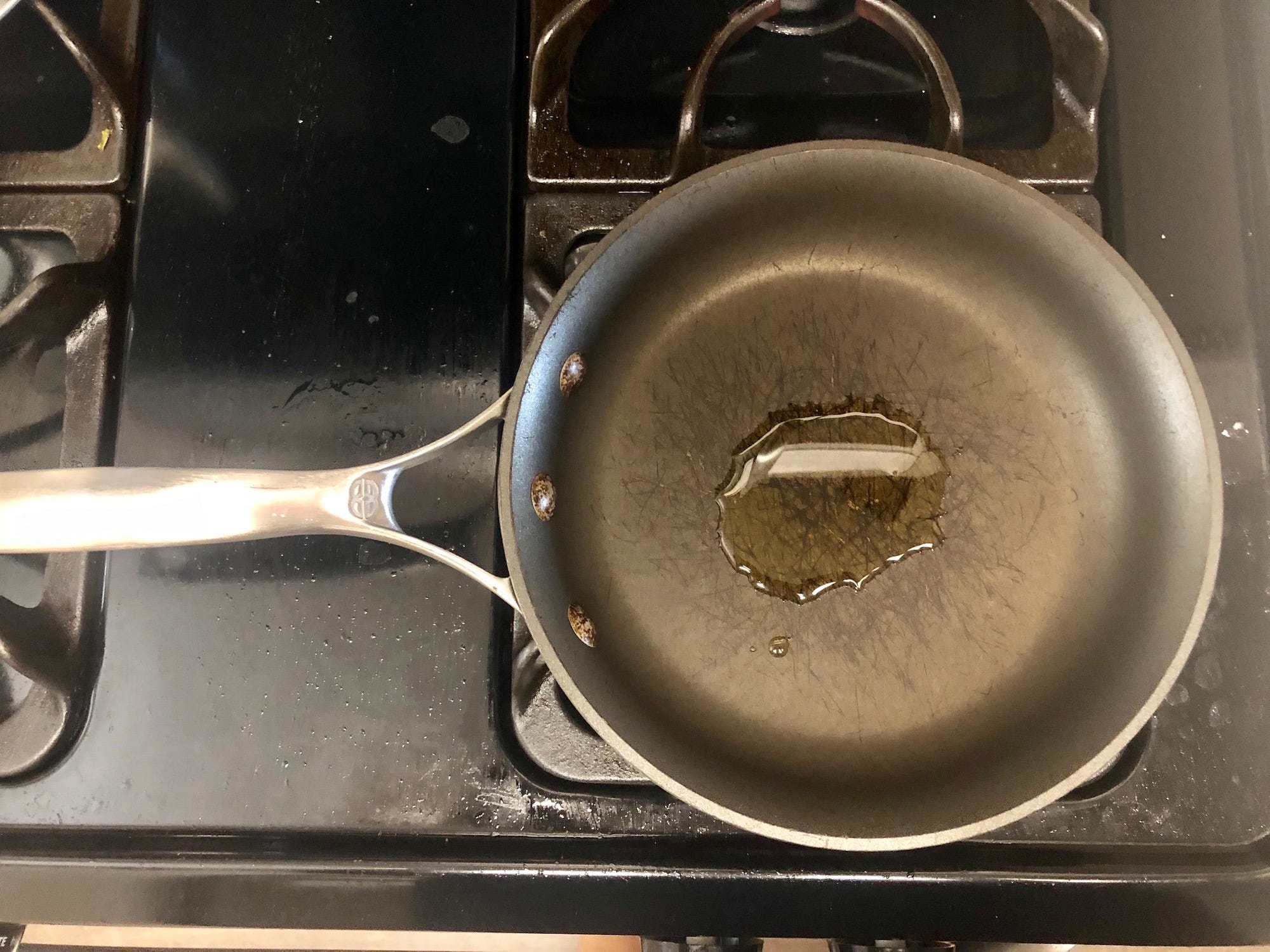 Anneta Konstantinides/InsiderTo start, I put a capful of olive oil in my pan.

I’m Greek, so olive oil has always had a huge presence in my kitchen. When I had to self-quarantine in an Airbnb for two weeks before seeing my parents during the pandemic, they dropped off a bottle of olive oil on my doorstep (I’m not kidding).

So when Teigen’s video first hit Twitter, I was surprised to see her getting so much hate for a technique I use daily. Plus, olive oil has a higher smoke point than butter, which is why so many chefs – including Andrés – use it to fry eggs.

I don’t own a ramekin, so I cracked my egg into the smallest bowl I could find in my kitchen. 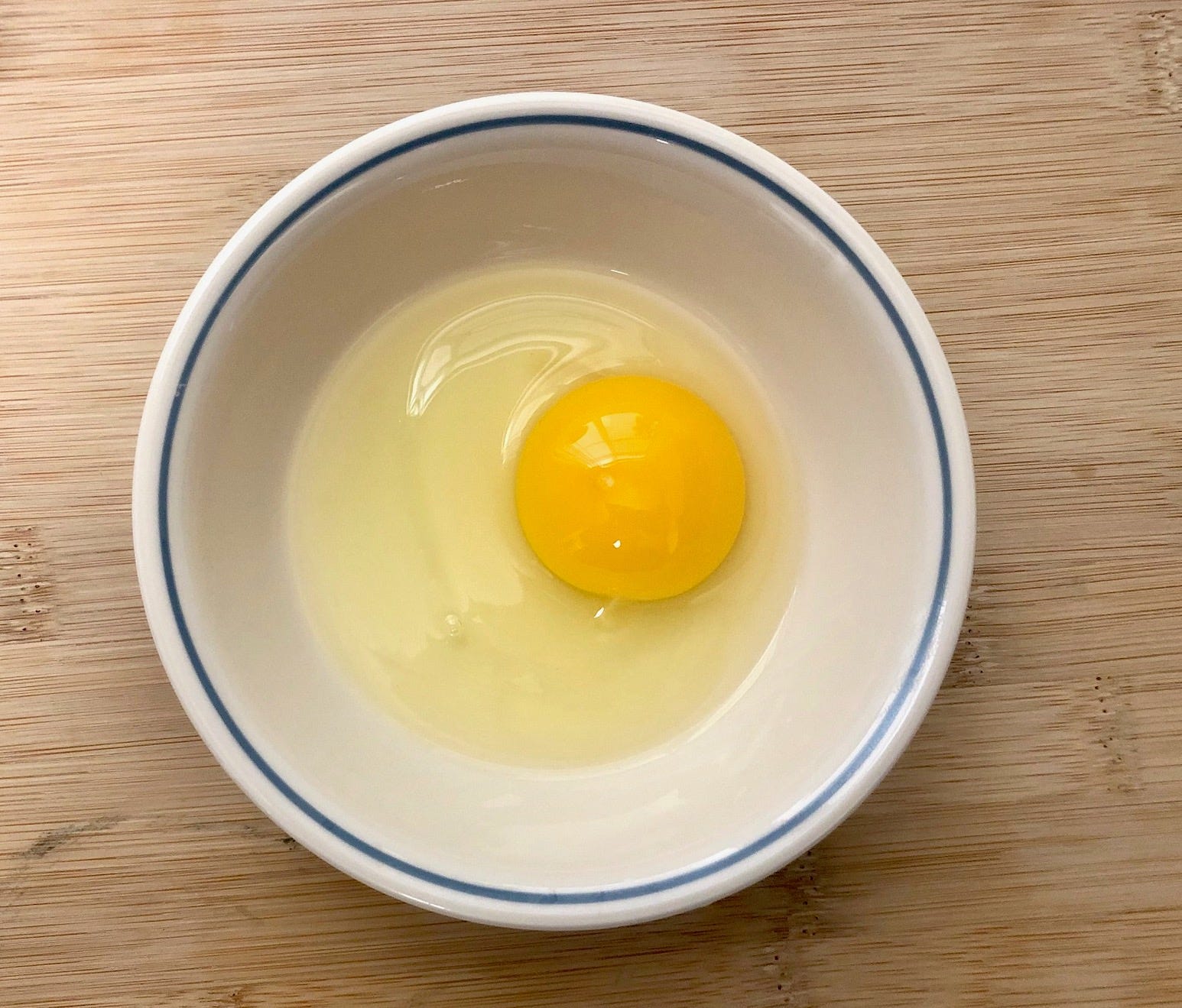 Anneta Konstantinides/InsiderLike Teigen, I cracked my egg in a bowl before putting it in the pan.

I usually just crack my eggs straight into the pan, but I wanted to follow Teigen’s tutorial step by step.

Then, I used the common trick Teigen used to see if the oil was hot enough for the egg. 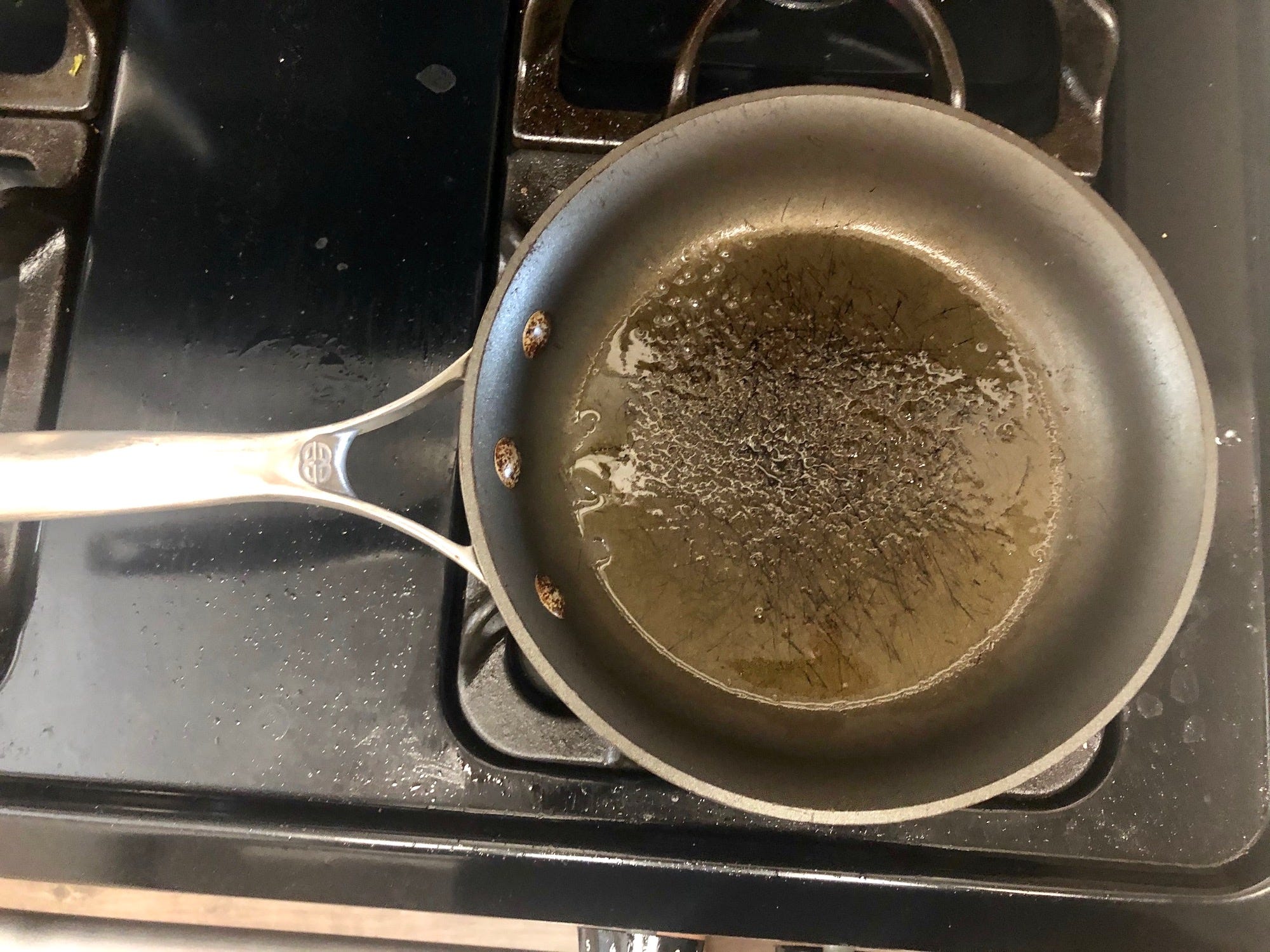 Anneta Konstantinides/InsiderI sprinkled water to see if the olive oil was ready for the egg.

In the video, Teigen fills a small bowl with water and then dips her fingers into it, sprinkling some droplets into the pan to see if they sizzle.

I flicked some water into my own pan and watched as the oil began to jump and dance. It was time for some egg action.

Teigen places a lid over her eggs during the cooking video, so I followed suit. 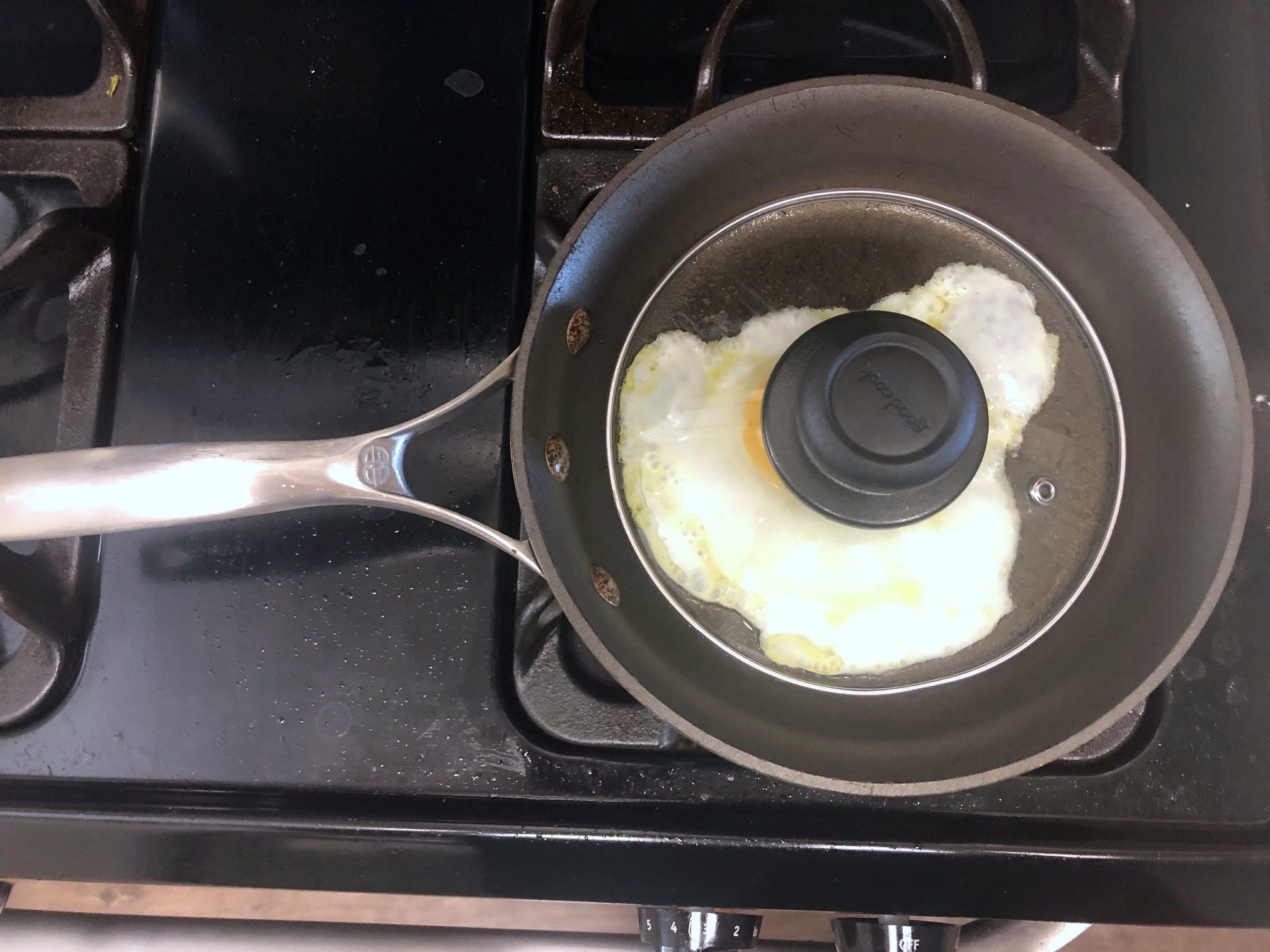 Anneta Konstantinides/InsiderI placed a lid over my egg as it cooked.

Teigen doesn’t specify how long she lets her eggs cook before using the lid, so I didn’t wait long before covering my pan.

I quickly realised, though, that I had put the lid on far too early. 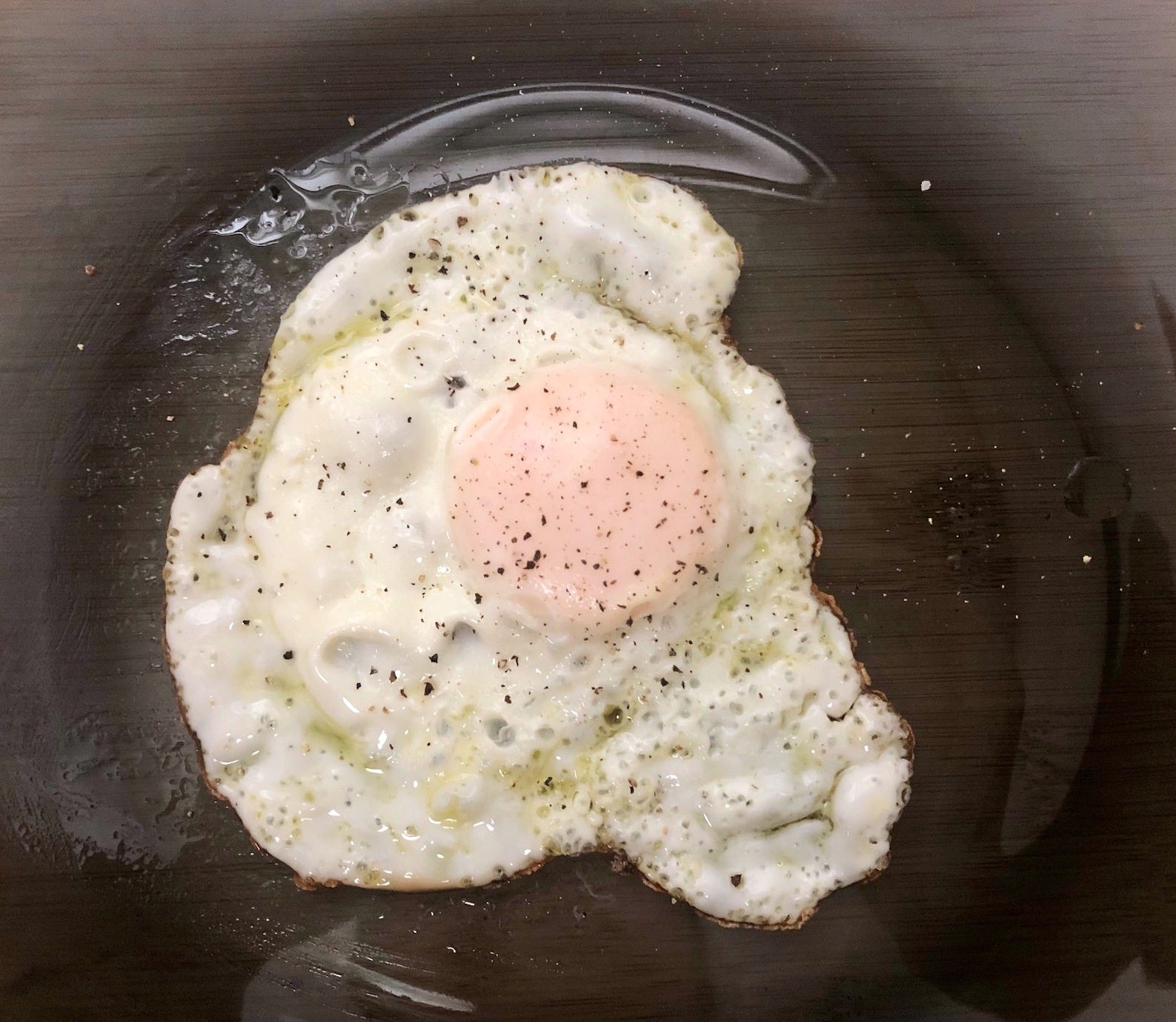 When I removed the lid, I realised I had more of a basted egg than one that was sunny-side up.

The egg still looked great, and I was excited to see how it’d taste since I had never tried the technique before. But since I was trying to achieve a version as close to Teigen’s eggs as possible, I tried once more with olive oil before moving on to butter.

I skipped the lid on my second attempt. 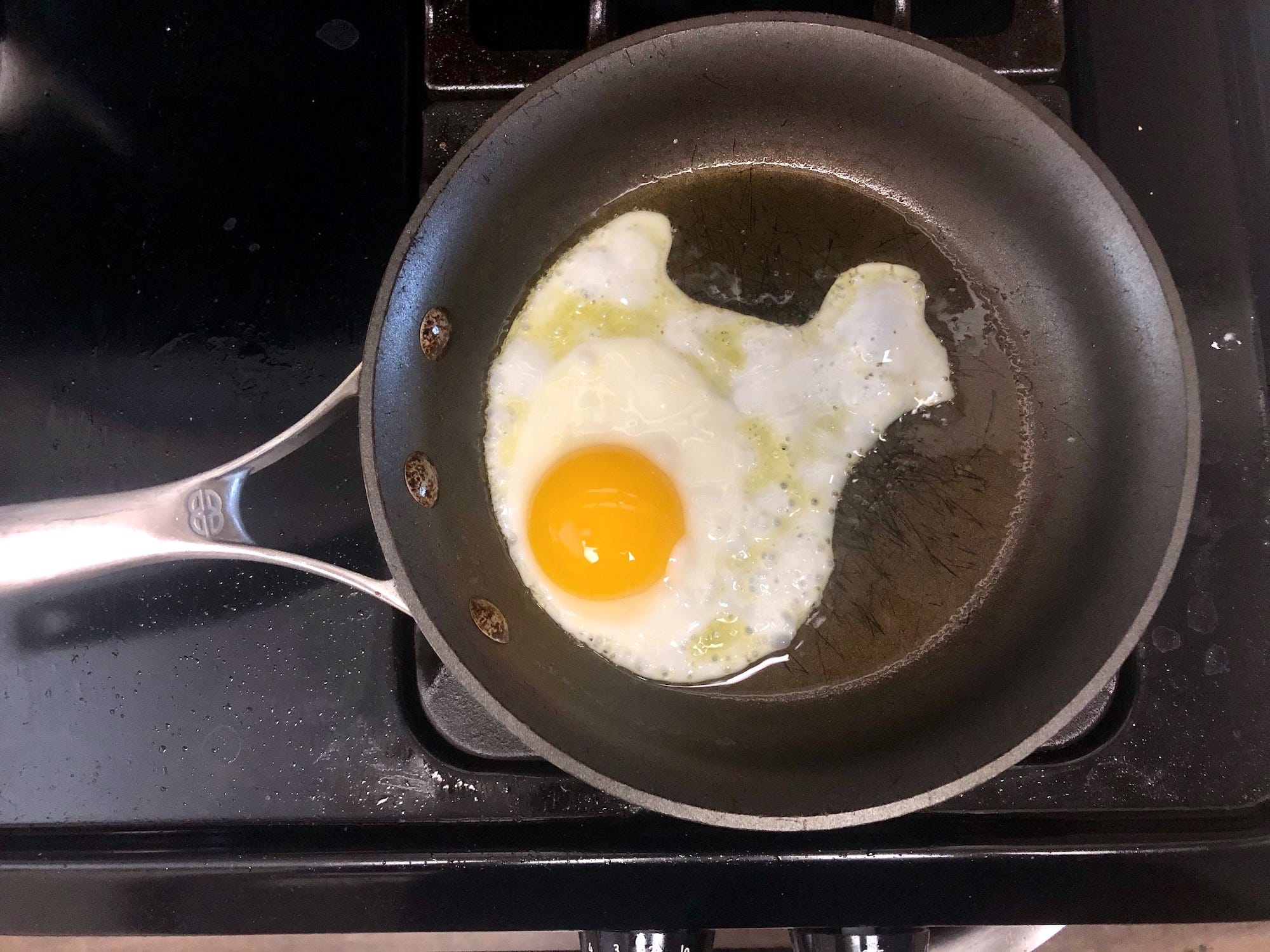 I don’t usually cover my eggs when I fry them, so I knew my yolk would look far more similar to Teigen’s eggs if I stuck to this technique.

Just like Teigen, I made sure to add plenty of salt as the egg cooked. 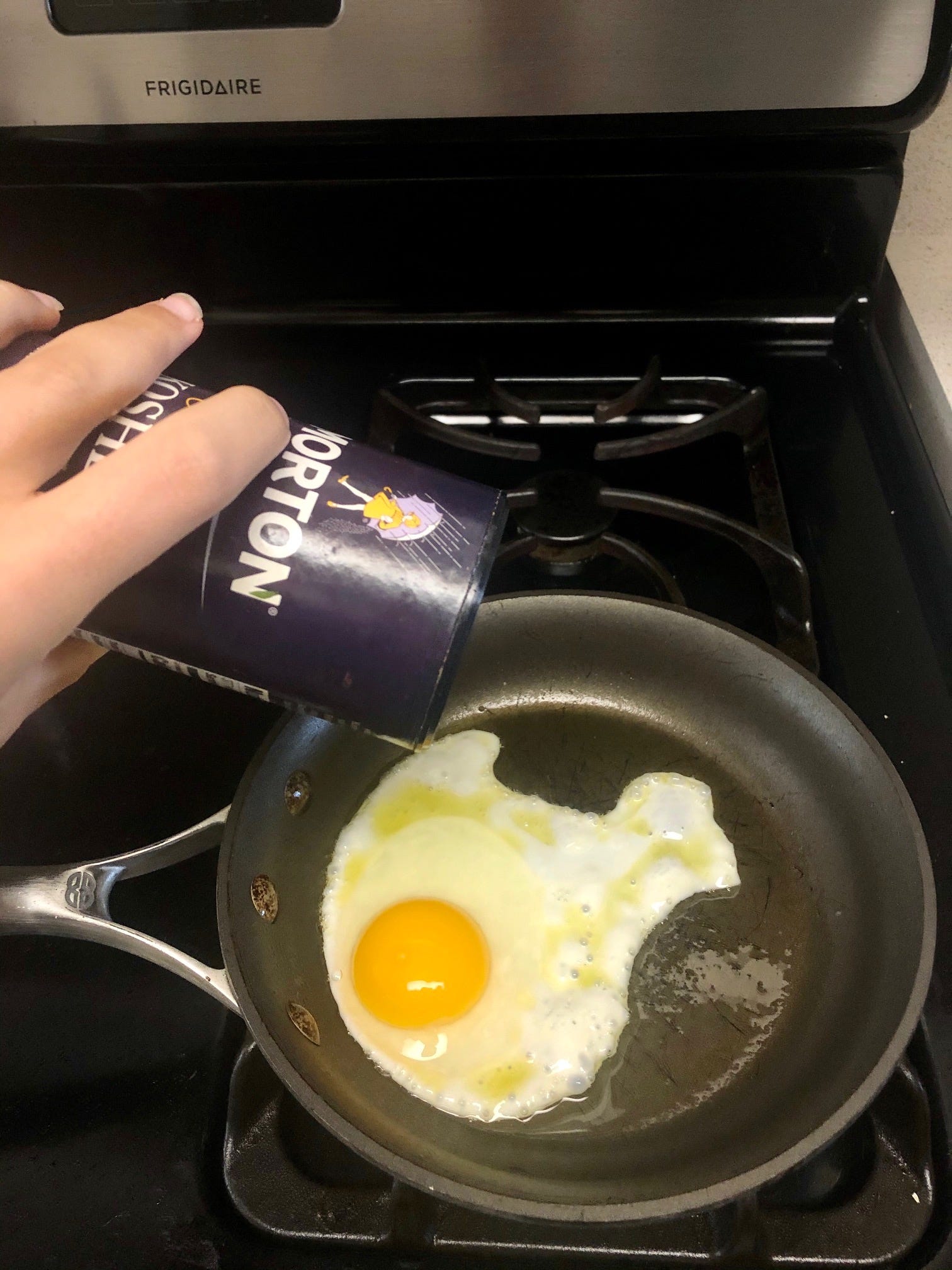 Anneta Konstantinides/InsiderI sprinkled a generous amount of salt as my egg cooked.

There are few things more bland than an egg without seasoning. 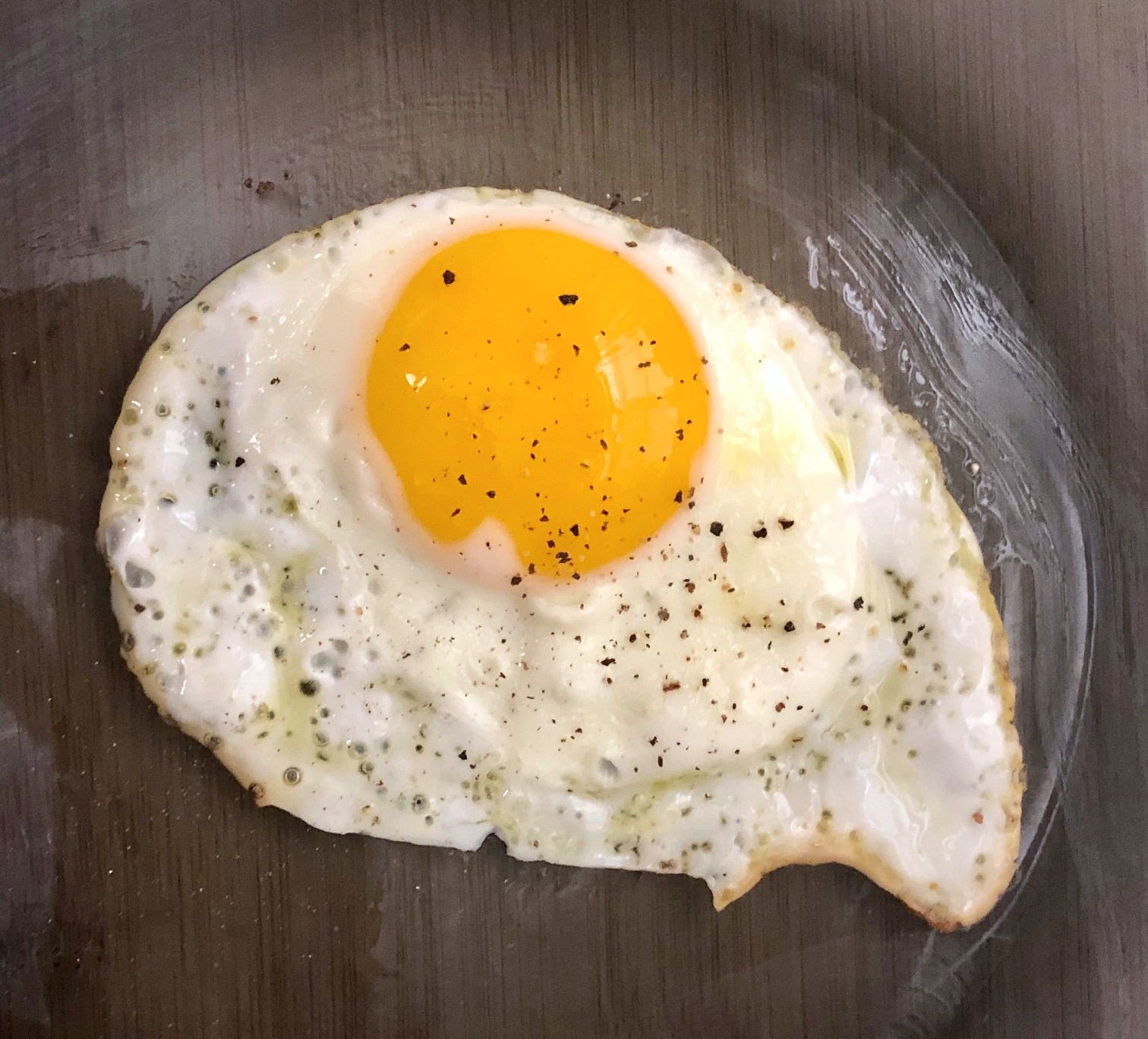 Anneta Konstantinides/InsiderThe yolk came out perfect, and the edges were slightly crispy.

The edges were less burnt than my semi-basted egg, and the yolk was full of runny potential.

After thoroughly cleaning my pan and running it under cold water, I tried frying an egg with butter. 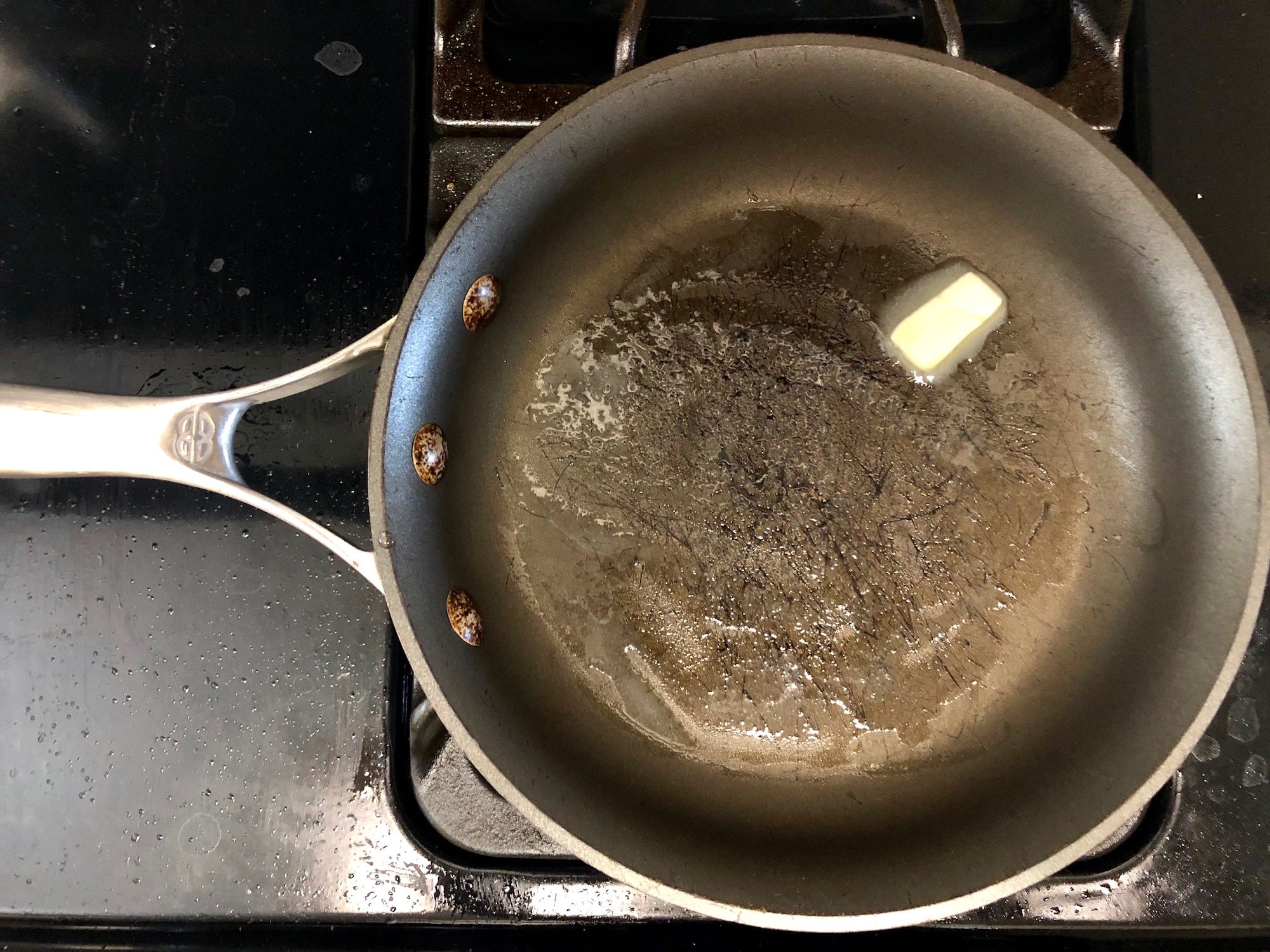 Anneta Konstantinides/InsiderI let the butter slowly melt around the pan.

I gently moved the butter around with my spatula as it slowly melted and began to cover the pan.

To keep things consistent, I cracked my egg into a bowl again before adding it to the pan, and didn’t use the lid. 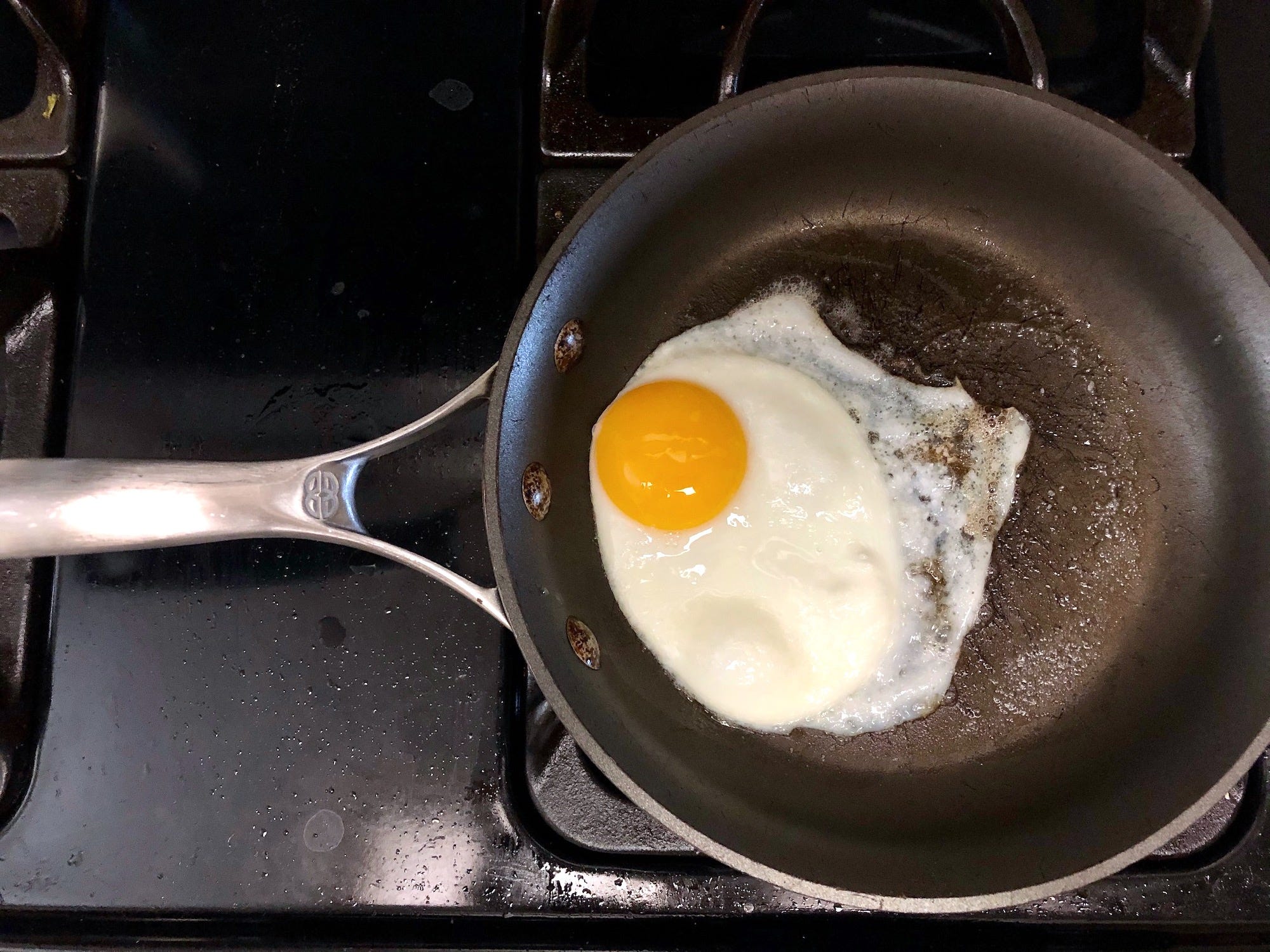 Anneta Konstantinides/InsiderI could already tell the edges were going to be far more burnt than my olive-oil egg.

I noticed that this egg was cooking a lot slower than the one made with olive oil, and was also far quieter. There was no intense sizzle sound like there had been during my previous cooking rounds.

The edges of my butter egg ended up burning far more than those of my eggs cooked in olive oil. 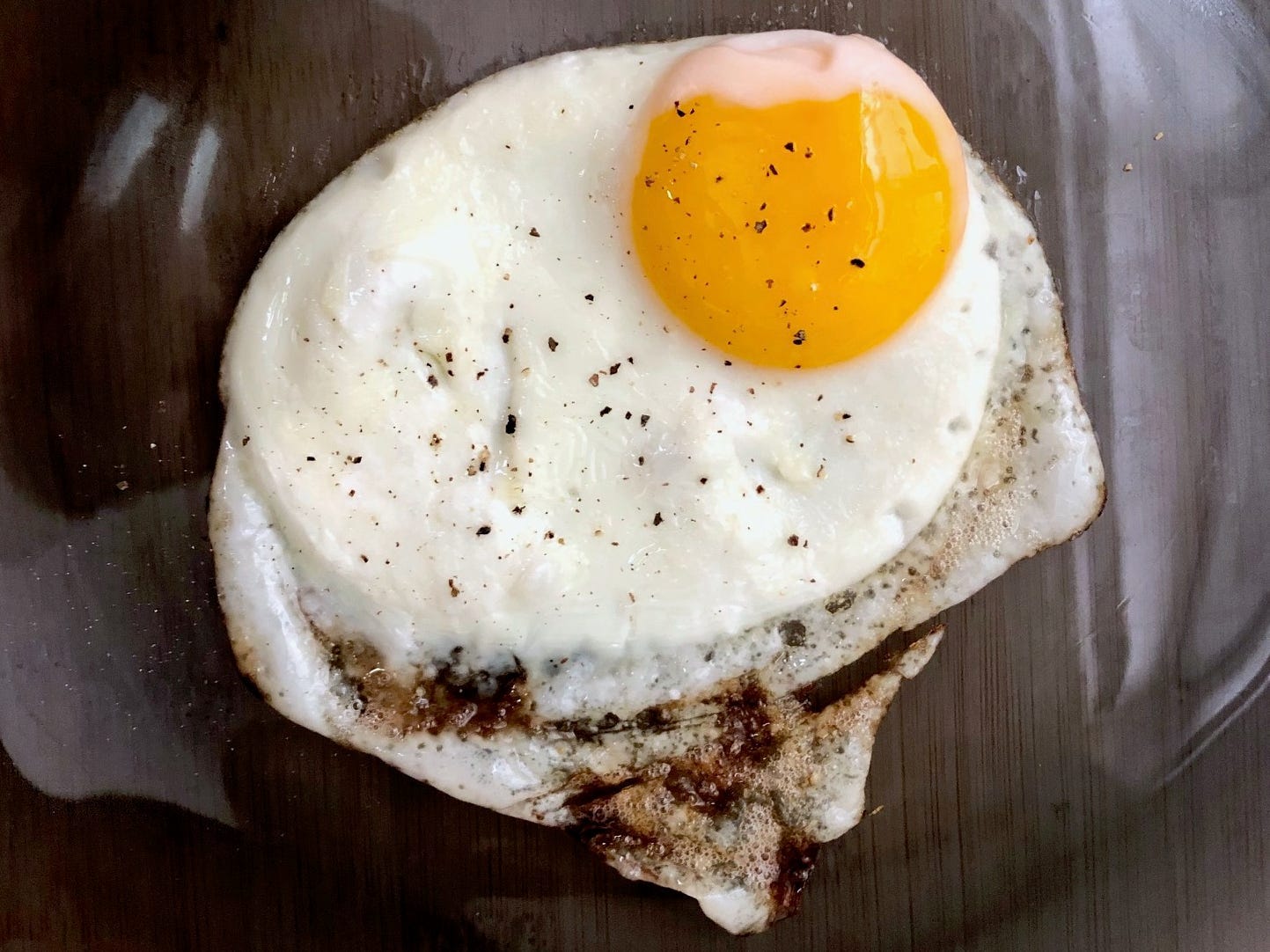 Anneta Konstantinides/InsiderParts of the egg weren’t edible because they were burned to a crisp.

This wasn’t all that surprising since butter has a lower smoke point than olive oil. Still, I had cooked my egg on low heat and was surprised to see just how much its edges had still burned.

Overall, I thought the olive-oil egg had a nicer appearance than the one made with butter. 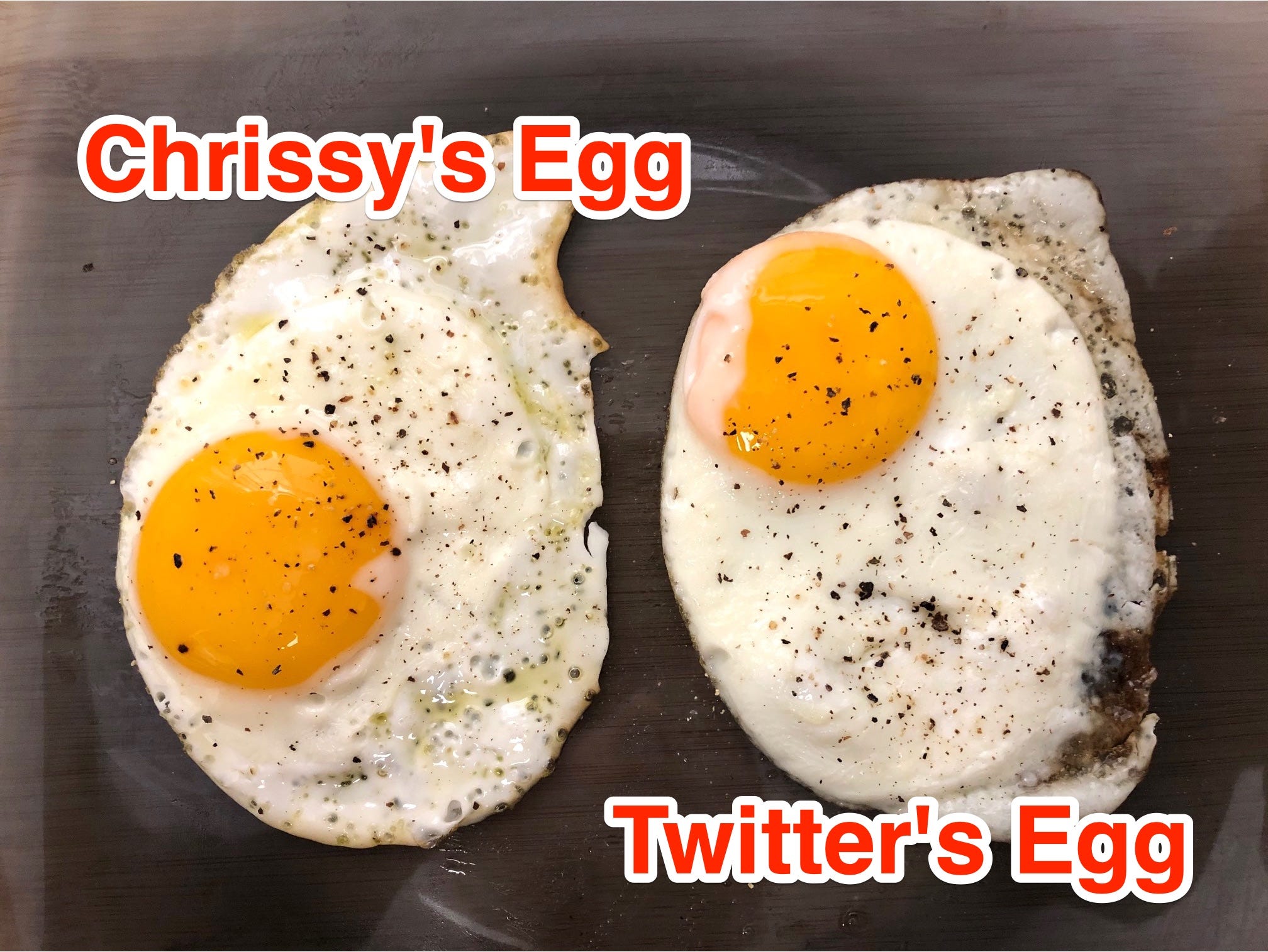 Anneta Konstantinides/InsiderThe butter egg did look a tad fluffier than my olive-oil egg.

While the butter egg looked like it might be a tad fluffier, it was also far more burnt than the olive-oil egg. Some edges were so crispy that I knew they’d likely be inedible.

When it came time to taste, I decided to throw my semi-basted egg into the mix as well. 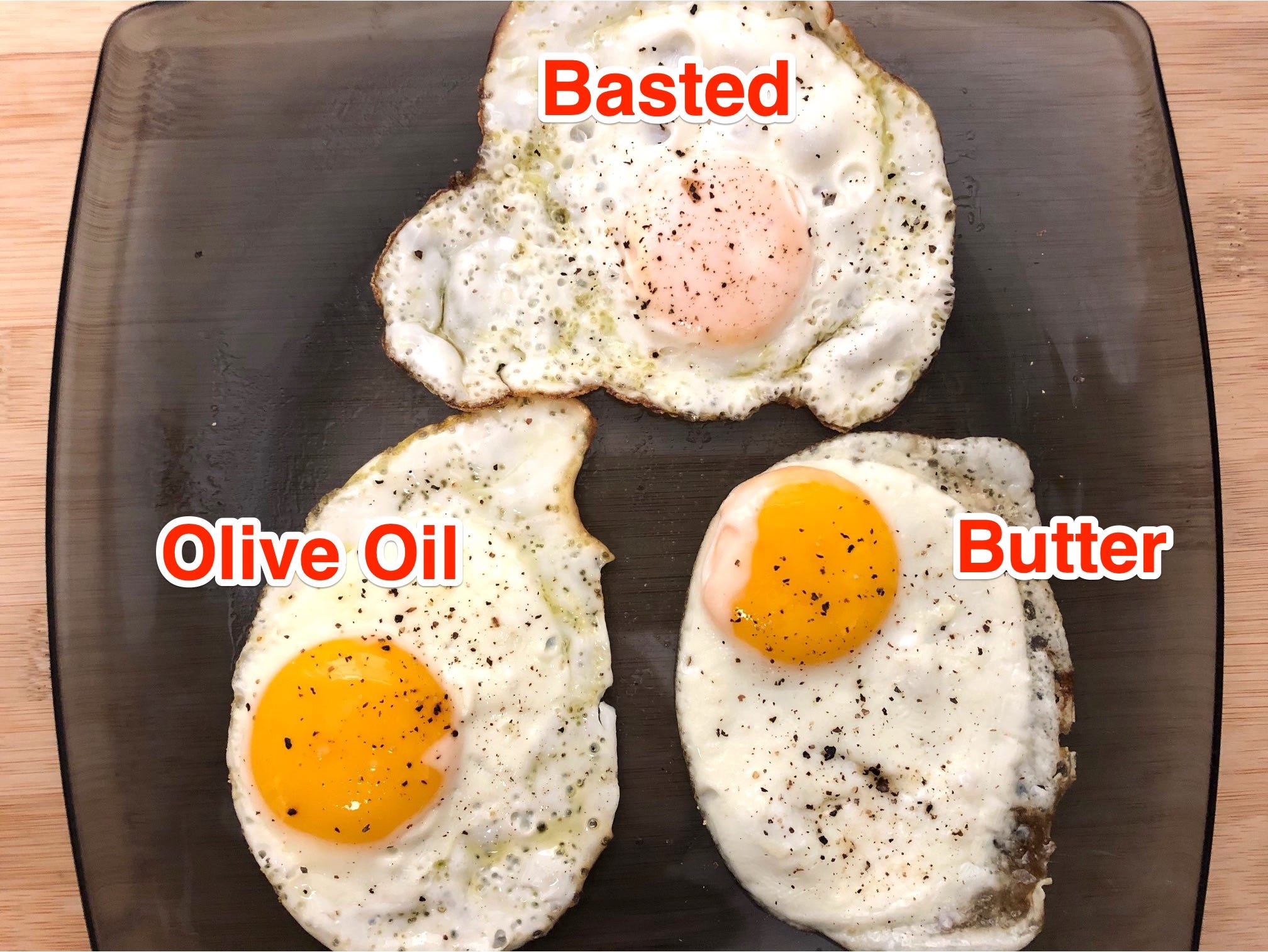 Anneta Konstantinides/InsiderNot wanting to waste them, I tasted all three eggs.

The yolk of my first egg was predictably more cooked than the other two, and I was surprised by how much I liked the taste. I thought the semi-basted egg would be far too crispy, but it added a really nice crunch to that familiar sunny-side up flavour.

As I suspected, the butter egg was a little fluffier than the olive-oil egg and the flavour was just a hint richer (I mean, it is butter). But the olive-oil egg tasted almost exactly the same! The difference hardly warranted an onslaught on Twitter.

Overall, my eggs-periment proved to me that, no matter how you cook them, fried eggs are really delicious. 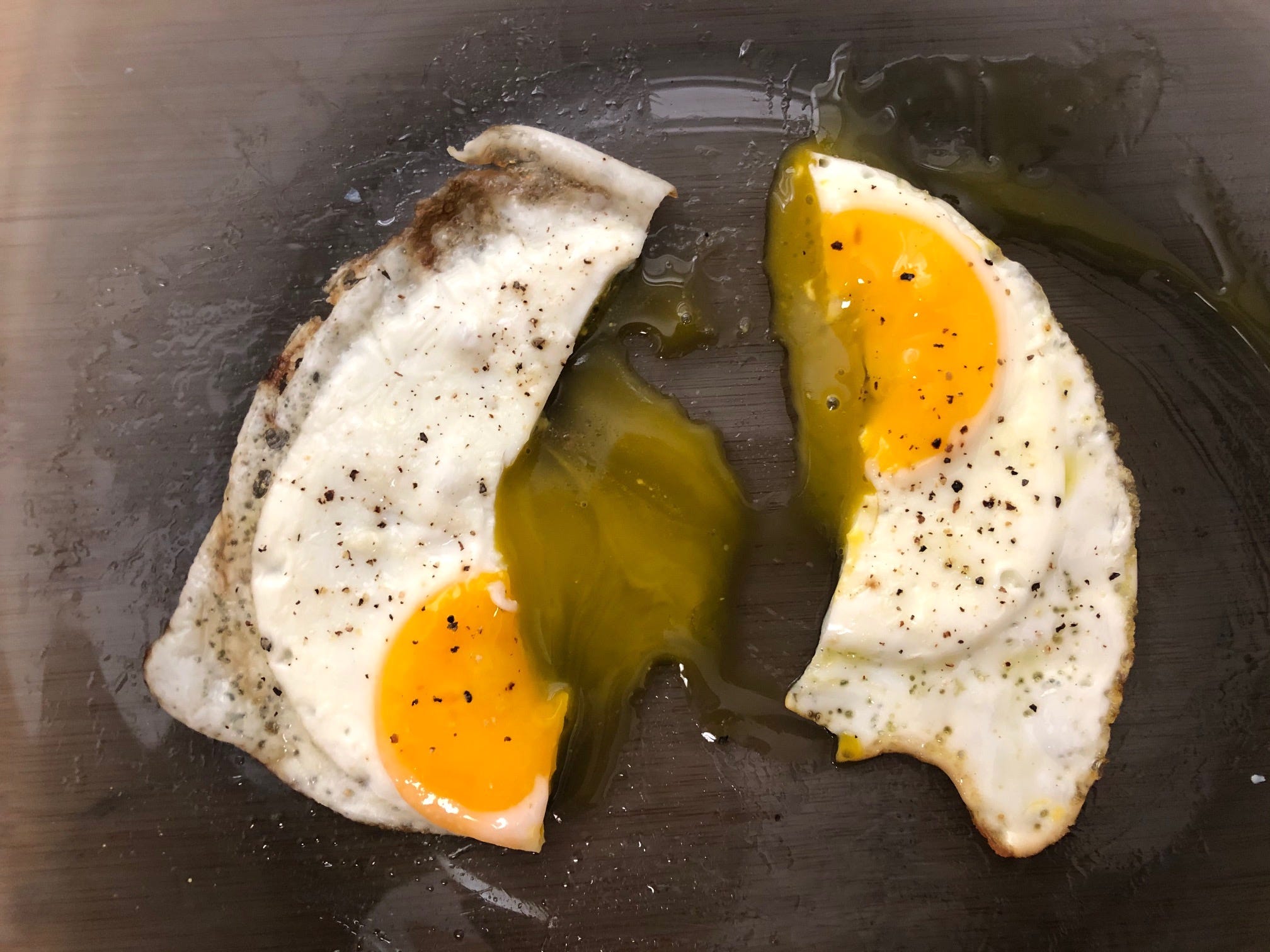 At the end of the day, it all comes down to personal preference. Since I eat fried eggs almost every single day – and like them a little less crispy – I’ll be sticking to olive oil. But I can see why butter would be a great option once in a while, especially when I’m craving something a little richer for breakfast.

So I’m calling this match against Chrissy Teigen versus Twitter a draw. Now step away from the computer, and make those eggs however you want.