Chris Evans has a surprising number of tattoos. Here's where they are and what we know about them. 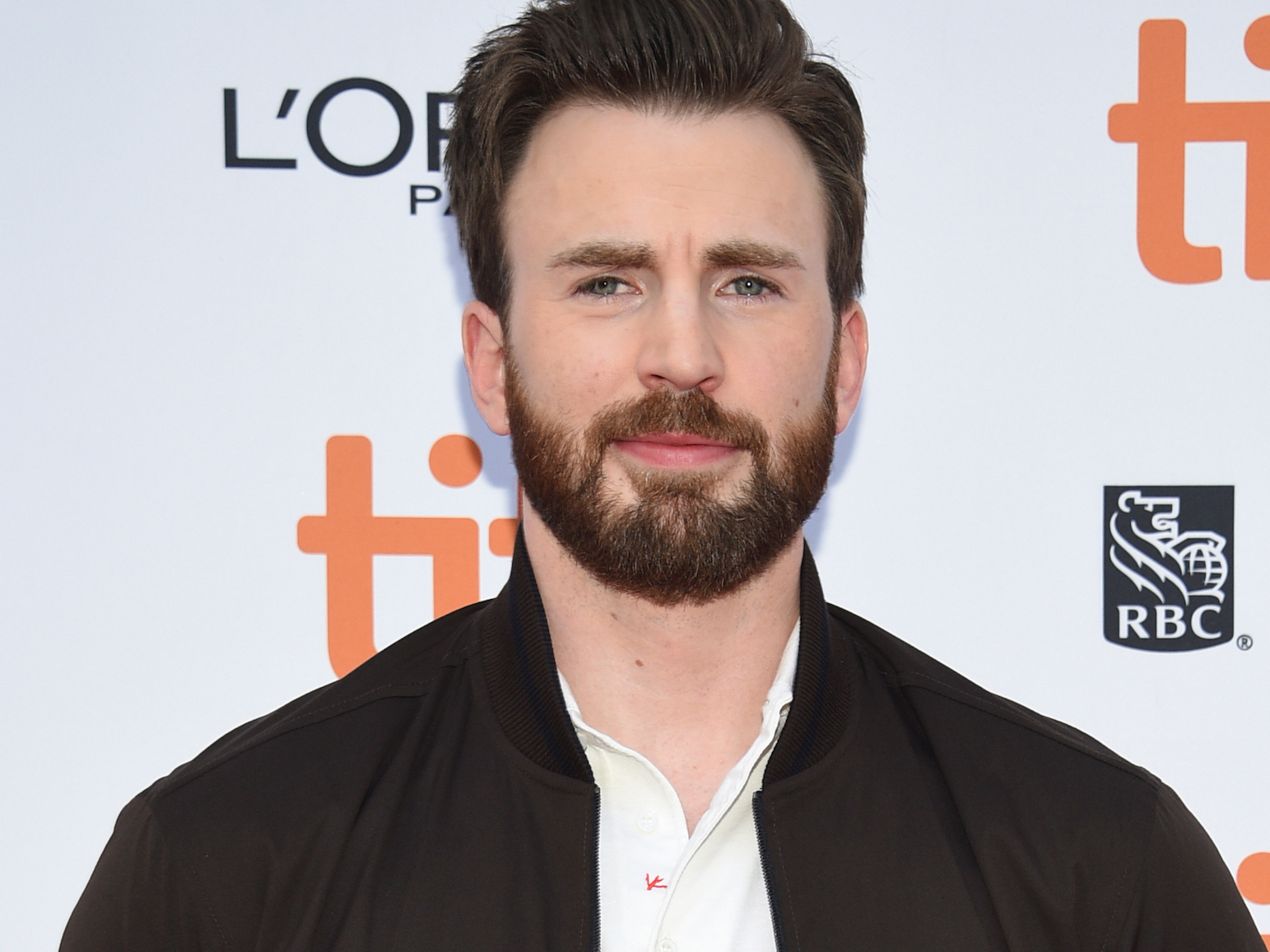 Evan Agostini/Invision/APChris Evans is known for his role as Captain America in the Marvel Cinematic Universe.

Chris Evans may have surprised plenty of fans when he recently showed off several tattoos in a video of himself backflipping into his pool, but he’s actually had ink for years.

Although the 39-year-old Captain America actor has had a fair share of shirtless scenes in films like “Not Another Teen Movie,” “Fantastic Four” (where he played another Marvel character, Human Torch/Johnny Storm), and “Captain America: The First Avenger,” his various tattoos were covered by makeup.

But a few of Evans’ designs have appeared in some of his early movies in Hollywood.

But eagle-eyed fans have caught glimpses in the Marvel actor’s interviews, social media posts, and images snapped by paparazzi.

Here’s a guide to Evans’ ink, plus the stories and potential inspirations behind them.

He has a Taurus zodiac tattoo on his left bicep that’s believed to be a tribute to his mum, Lisa Evans. 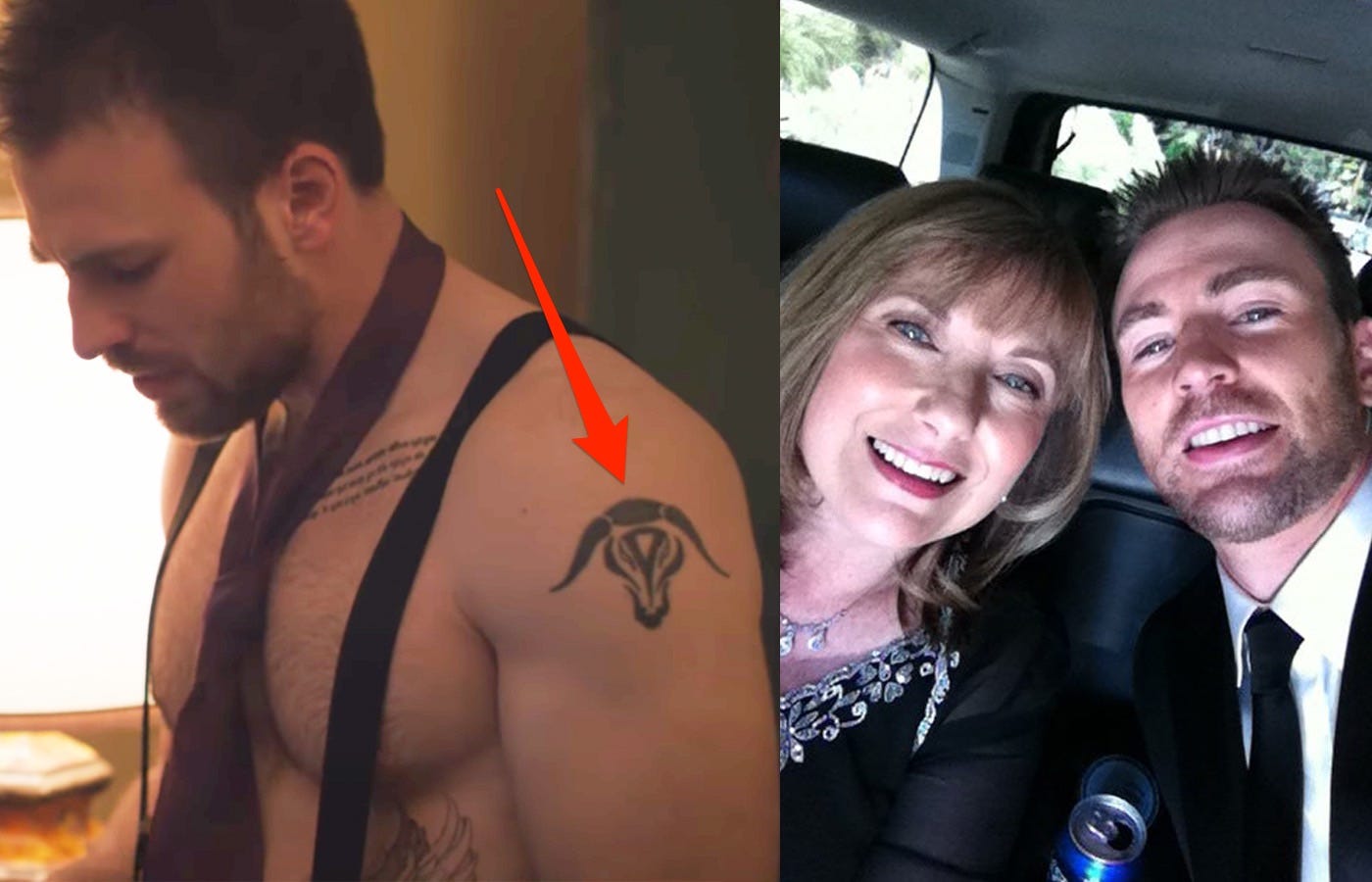 Millennium Entertainment; Chris Evans/TwitterOn the left is Chris Evans in the movie ‘Puncture.’ On the right is the actor with his mum, Lisa Evans.

The tattoo can be clearly seen in a 2019 photoshoot for a Men’s Journal cover story.

It was also spotted in two of his early movies: the 2004 thriller “Cellular” and the 2011 movie “Puncture.” For the latter film, Evans played a drug-addicted lawyer. His character’s body was covered in tattoos, some that were fake and others that belonged to Evans in real life.

It’s unclear when he got the Taurus ink, but based on a throwback headshot Evans posted on Twitter, he got the design sometime in the ’90s.

The actor has gushed about his mum a few times. In a 2018 Mother’s Day post, he called her “wonderful” and referred to his parents as “vessels of love” during a press conference.

There’s a “loyalty” tattoo on his right bicep. 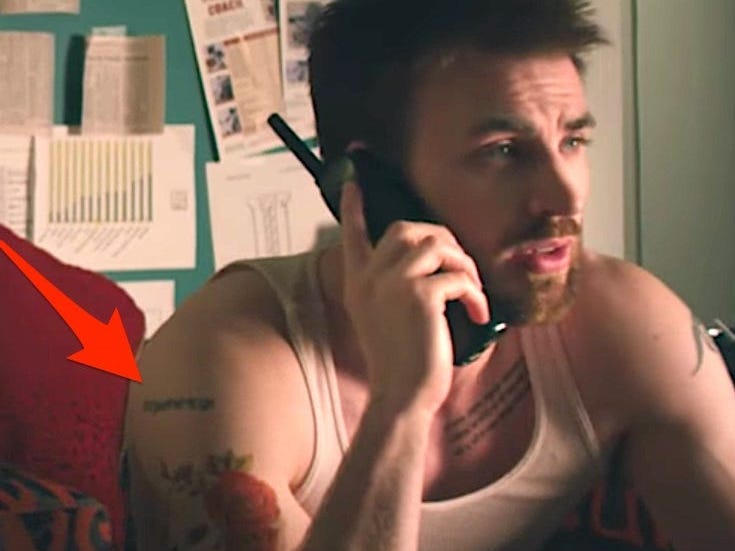 The ink is located on his right bicep and was more prominently seen in a Gucci Guilty Intense fragrance ad with “Westworld” star Evan Rachel Wood.

Similar to the Taurus tattoo, it’s likely that he’s had “loyalty” inked since the ’90s, considering that both designs are visible in an old headshot he shared online.

In a 2014 interview with The Hot Hits Live From LA to promote “Captain America: The Winter Soldier,” Evans spoke about the “loyalty” tattoo, which was barely visible underneath his short-sleeved shirt.

“I really like tattoos, but the problem is, when you wear a short-sleeved shirt in a movie, that’s an extra hour in the makeup chair, so it’s not worth it,” he said. “I’m all for tattoos, but just somewhere they can be hidden.”

A tattoo dedicated to his late friend Matt Bardsley appears on the right side of his stomach, and features the phrases “In loving memory” and “with me always.” 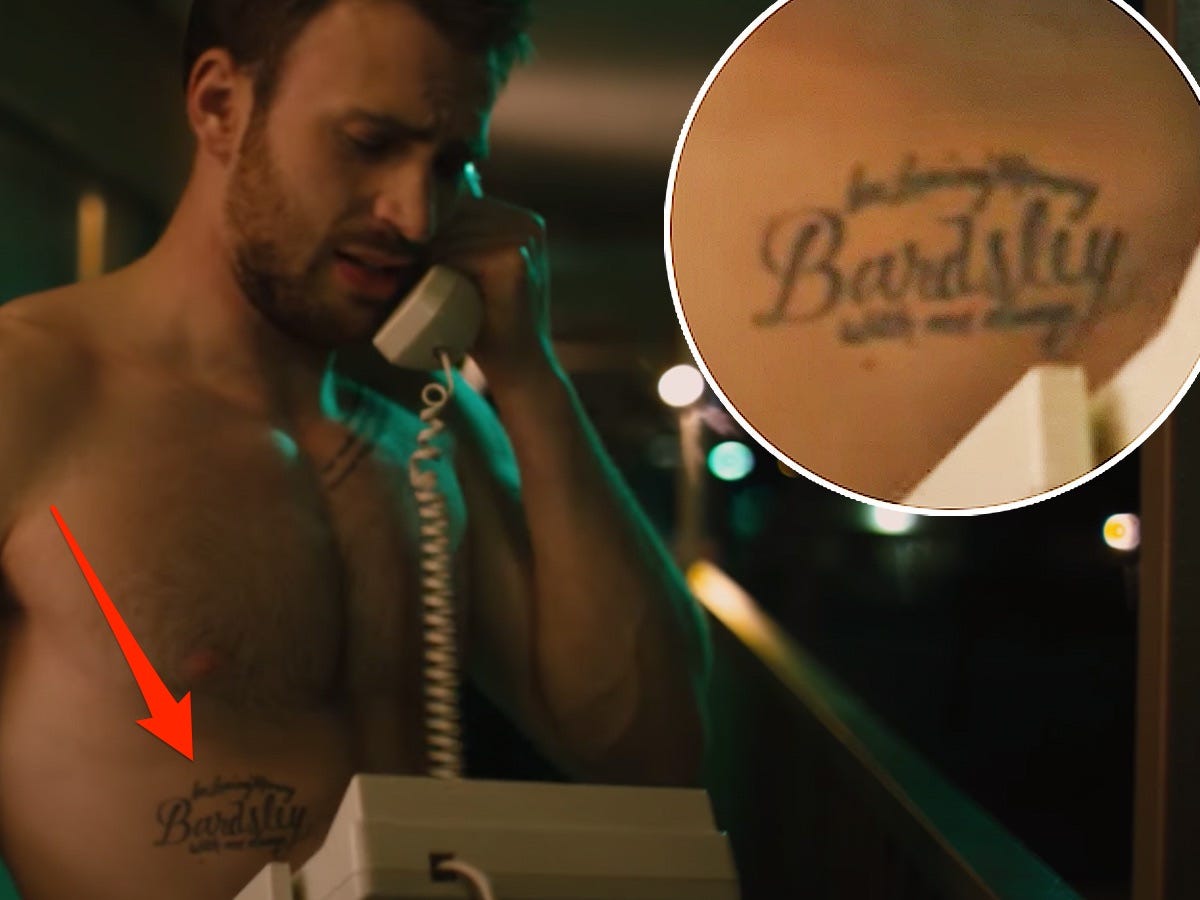 An archived article from The Boston Globe said that Bardsley died in November 2003 at 22 years old, two days after his all-terrain vehicle struck a log in Massachusetts.

According to the Daily Star, Evans and Bardsley were childhood friends.

The tattoo can be seen in old Gap ads that Evans starred in, as well as the movie “Puncture.”

It’s been speculated that the block of text on his upper chest is a quote from spiritual teacher Eckhart Tolle. 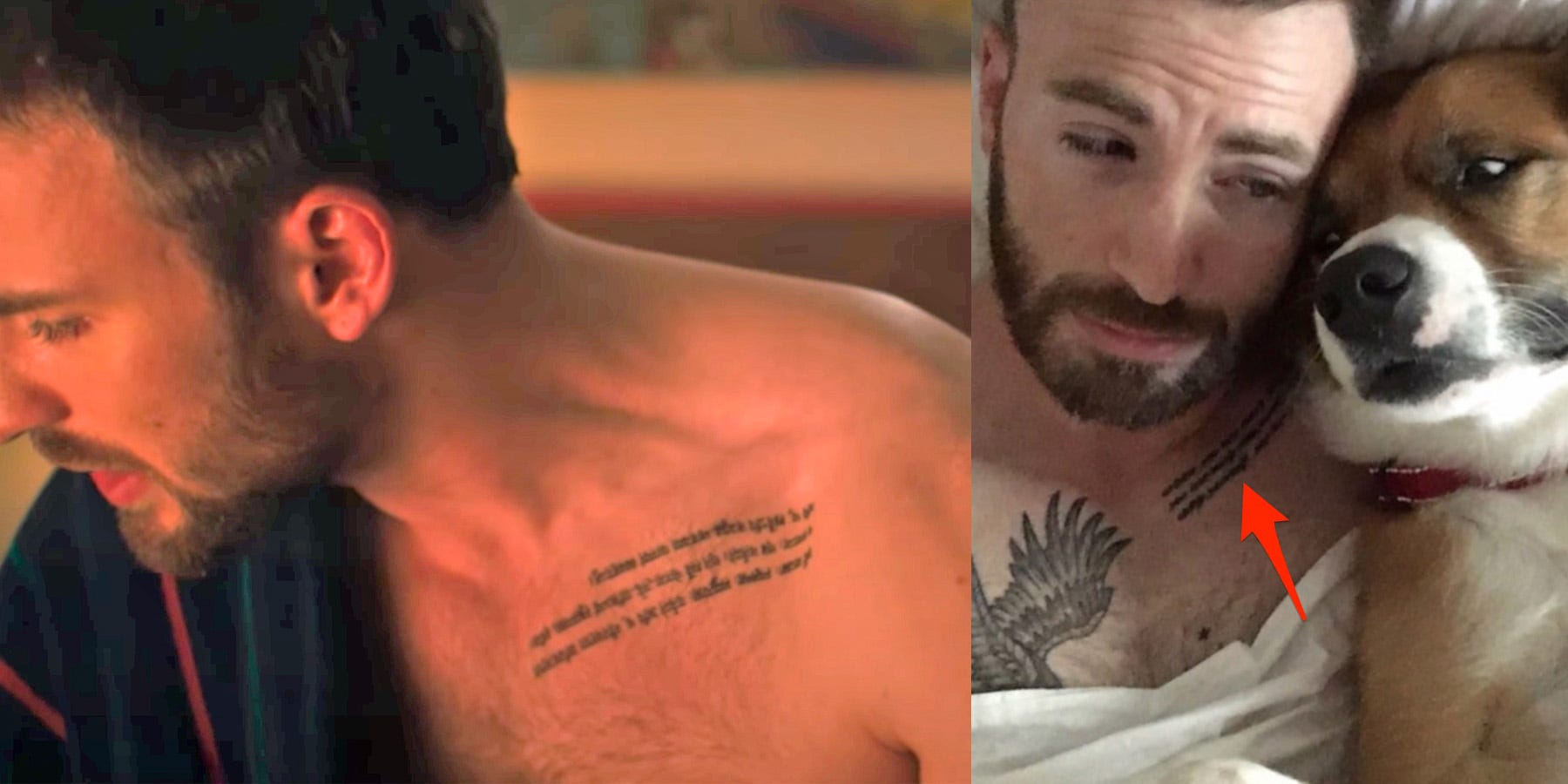 Millennium Entertainment; Chris Evans/InstagramChris Evans has a quote tattooed on his chest.

The tattoo, which can be seen in the movie “Puncture” and a selfie that Evans posted, is hard to decipher.

Evans has previously spoken about his spiritual beliefs in a 2017 interview for Hong Kong Tatler.

“Buddhism, Hinduism, Taoism, a lot of it is very similar; there are just varying deities and dogma,” he said. “For the most part I think Eastern philosophies are about maintaining a certain level of presence, acknowledging that your ego is probably not your friend, and refusing to be ruled by what has happened or what will happen. That, I think, is the best way to peace.”

He has a matching Avengers tattoo with four of the original members of the group, dedicated to his career-defining role as Captain America/Steve Rogers. 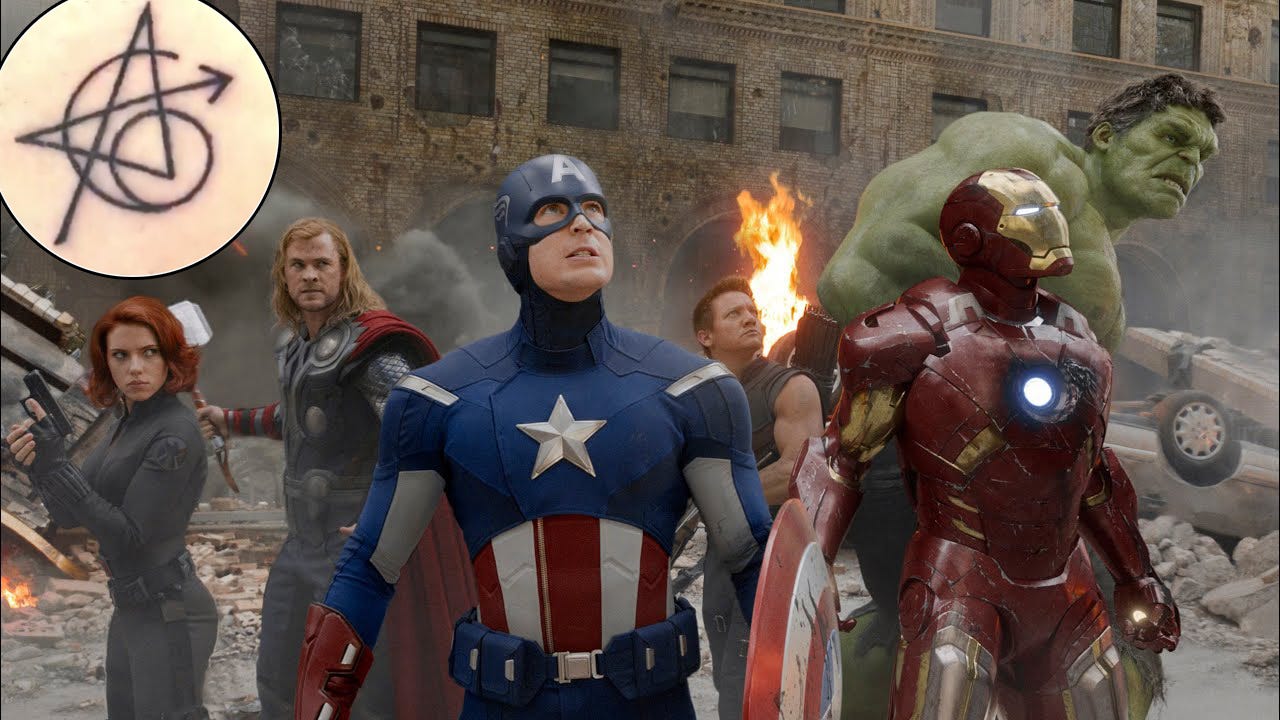 The above photo shows Robert Downey Jr.’s tattoo, not that of Evans.

Missing from the group was Mark Ruffalo (Hulk/Bruce Banner), who opted against getting inked because he’s “afraid of needles.”

It’s unclear where Evans’ ink is located, but according to Page Six, it’s on the right side of his torso.

The idea for matching tattoos came from Johansson and Evans. The design was created by Josh Lord, an artist at New York’s East Side Ink who has also done several pieces for Johansson.

In a January 2019 interview with Revolver magazine, Lord said that he worked with the stars to create a design that everyone agreed on and represented their Marvel journeys.

If you look closely at the ink, it’s packed with references to the original six, depending on which angle you look at the tattoo from.

For example, the number six is visible, along with a big “A” to represent the group. But you can also see an arrow for Hawkeye, a circle representing Iron Man’s arc reactor, and Black Widow’s hourglass symbol.

Lord also said that Evans and Johansson were the first to get the ink because Evans was in New York from March to May 2018 for the Broadway show “Lobby Hero,” which he starred in.

As for the other “Avengers” members, Downey Jr. told Entertainment Weekly that Lord flew out to LA to give the rest of the stars the tattoo. In turn, Lord let the actors put the same design on him.

It looks like Evans has a large eagle on the upper right area of his chest. 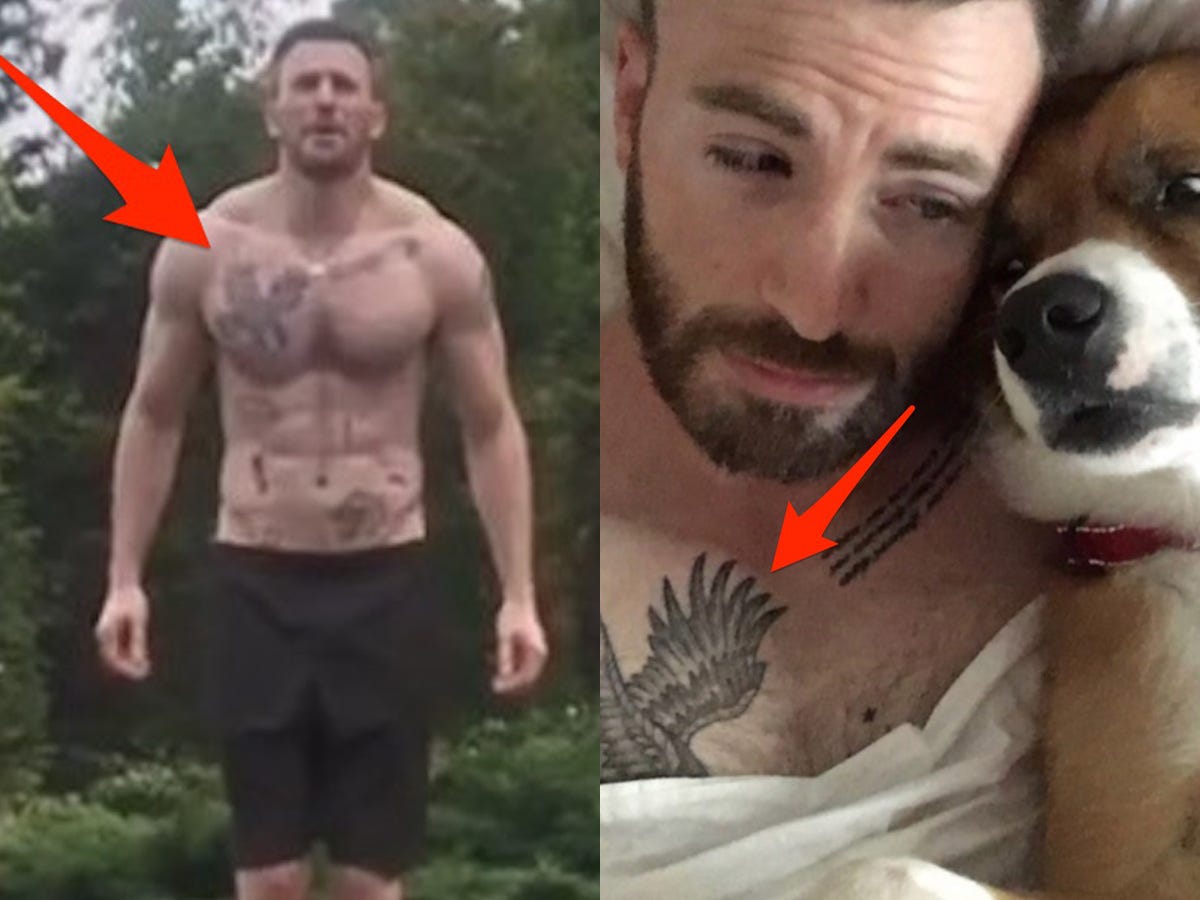 Chris Evans/InstagramChris Evans has an eagle tattoo on his chest.

It was on display in his viral poolside video and a selfie that he posted on his Instagram story in September with his dog named Dodger.

It’s unclear when he got the eagle, but it might have been sometime after Evans got the Avengers tattoo.

Back in July 2018, tattoo artist Josh Lord posted a photo of Evans and said that he “shamelessly asked him to sign my Avengers book when we got started on a giant new tattoo this week!!! I promised not to show it off yet though.”

Lord also told Revolver magazine in early 2019 that after Evans got the Marvel ink, he “continued to come back for more tattoos.”

“We are now going to start on a whole big new chest piece for him, which I probably should wait for him to reveal the details, but I’m very excited,” the artist said. “He’s got a really cool idea that I can’t wait to do.”

He has a tattoo that reads “Dodger,” a tribute to his beloved dog. 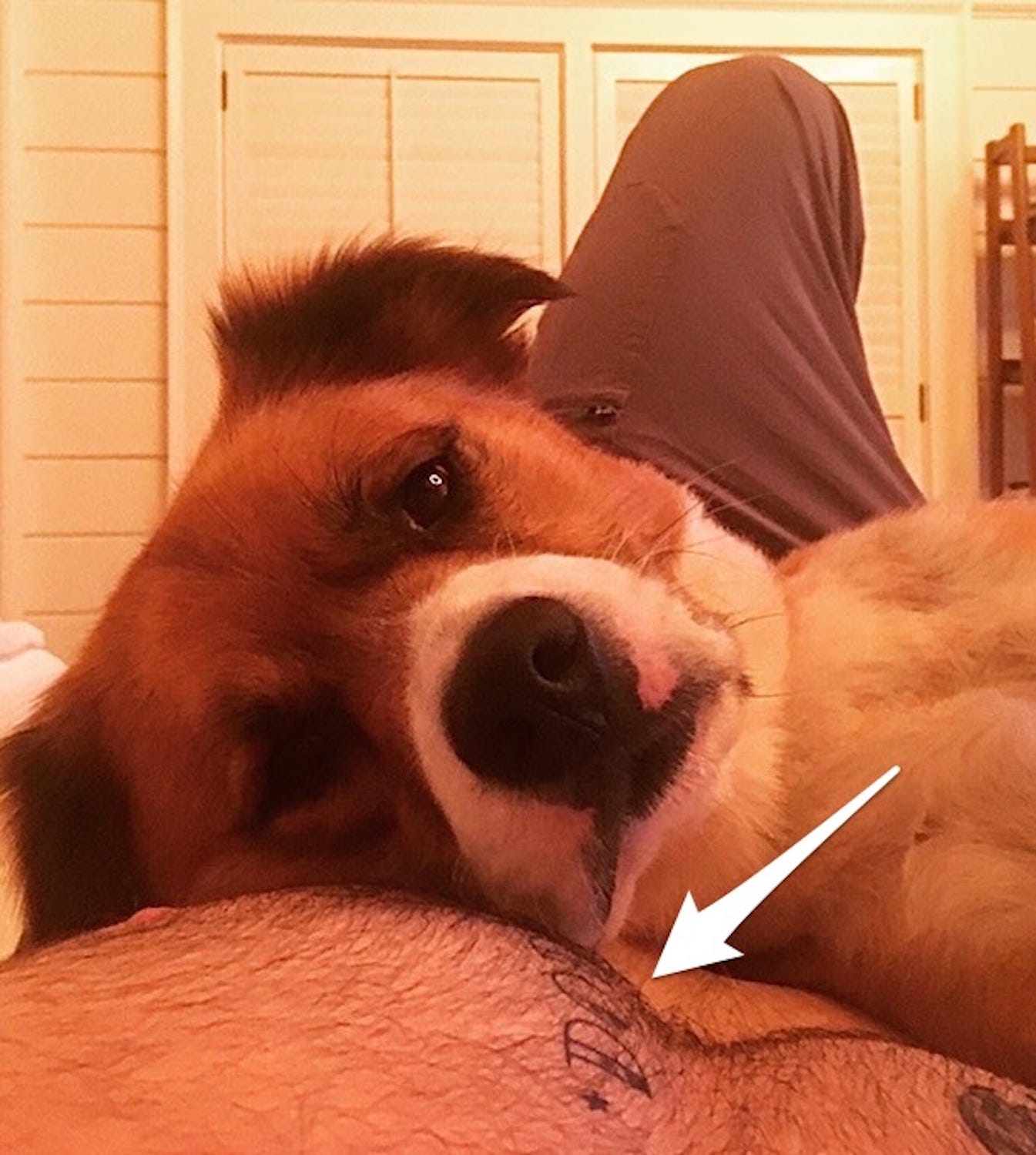 Chris Evans/InstagramChris Evans has a tattoo dedicated to his pet.

Evans’ dog makes frequent appearances on his social media accounts, and he shared a photo of the chest tattoo in October 2020 with the caption: “Dodger lying on DODGER.”

The actor jokingly told Jimmy Fallon that he “caved” and made an Instagram account because he had “too many good pictures of my dog. I was like, these are being wasted on my phone. I gotta put them somewhere.”

“He’s up for anything,” Evans told the publication. “God, dogs, they’re such great animals. I really can’t say enough about dogs. I’m a dog lunatic. He sleeps on my pillow. You wake up face-to-face.”

The actor also shared a throwback video in 2018 that showed the moment he met Dodger and decided to adopt him.

During a 2020 interview with Jimmy Kimmel, the actor said that his dog’s name was inspired by the 1988 animated Disney movie “Oliver & Company” that he “grew up watching.”

“Billy Joel is the voice of Dodger. And when I first saw him in the shelter, I said, ‘He looks like Dodger from ‘Oliver & Company,'” Evans said. “And after I decided I was taking him home with me, I went through the process of thinking of other names, and I just couldn’t get off Dodger.”

Evans also told the talk-show host that he got the Dodger tattoo “not long” after he adopted the dog.

“That’s probably one of the purest relationships I have so I’ll never regret that tattoo,” he said. “I’ve regretted a few in my life, but not that one.”

Based on Evans’ video from his pool, there are a few more tattoos on his body, but it’s difficult to see what the specific designs are. 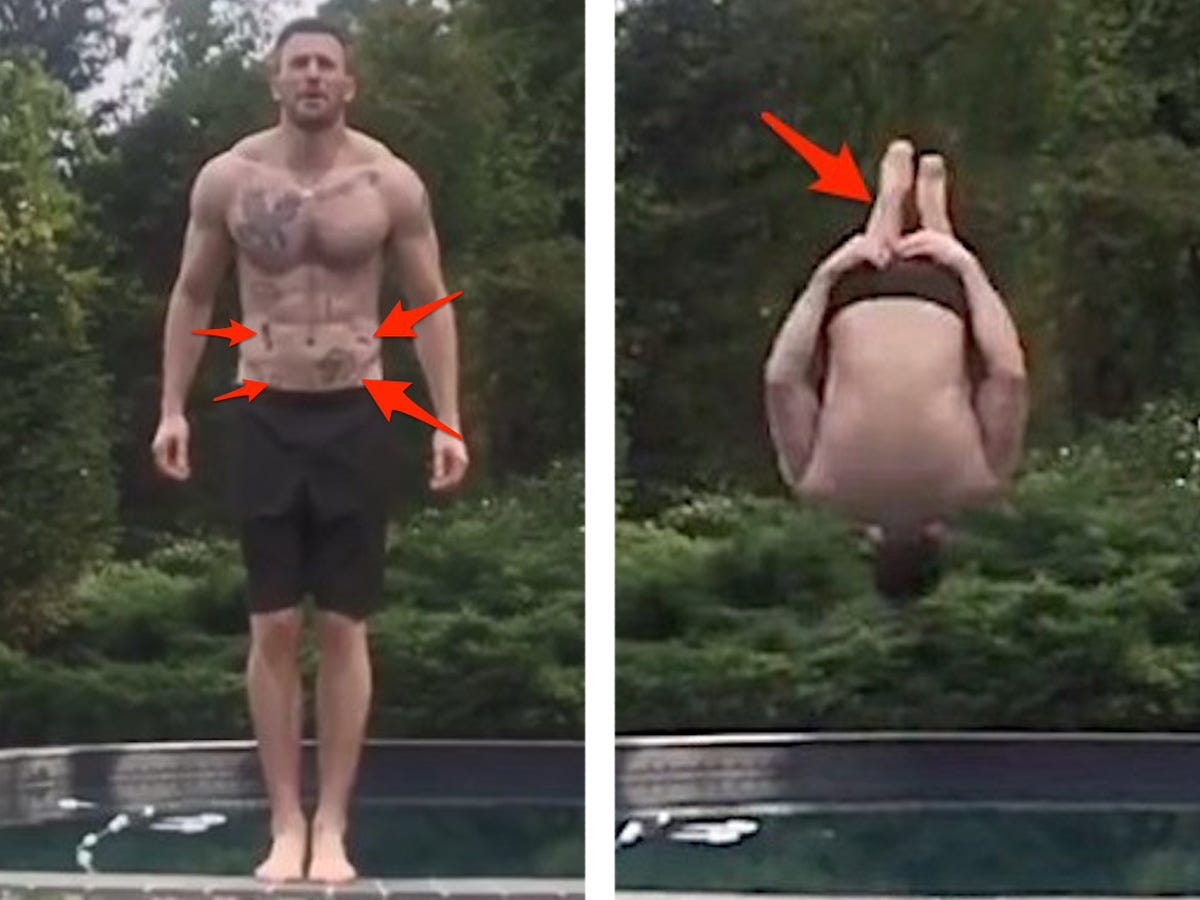 Aside from the eagle, it looks like there’s another large tattoo on the left area of his abdomen. He also has a few smaller designs on his stomach, but they’re hard to see clearly.

Some (or all) of these could be the tattoos that Lord mentioned working on for Evans.

Additionally, he’s had ink on the back of his right ankle for years that reads “SCS” – for his siblings named Scott, Carly, and Shanna.

The tattoo was seen in paparazzi photos from the set of his 2014 rom-com “Playing It Cool.”

Evans had a symbol on his right bicep below “loyalty,” but it has since been removed. 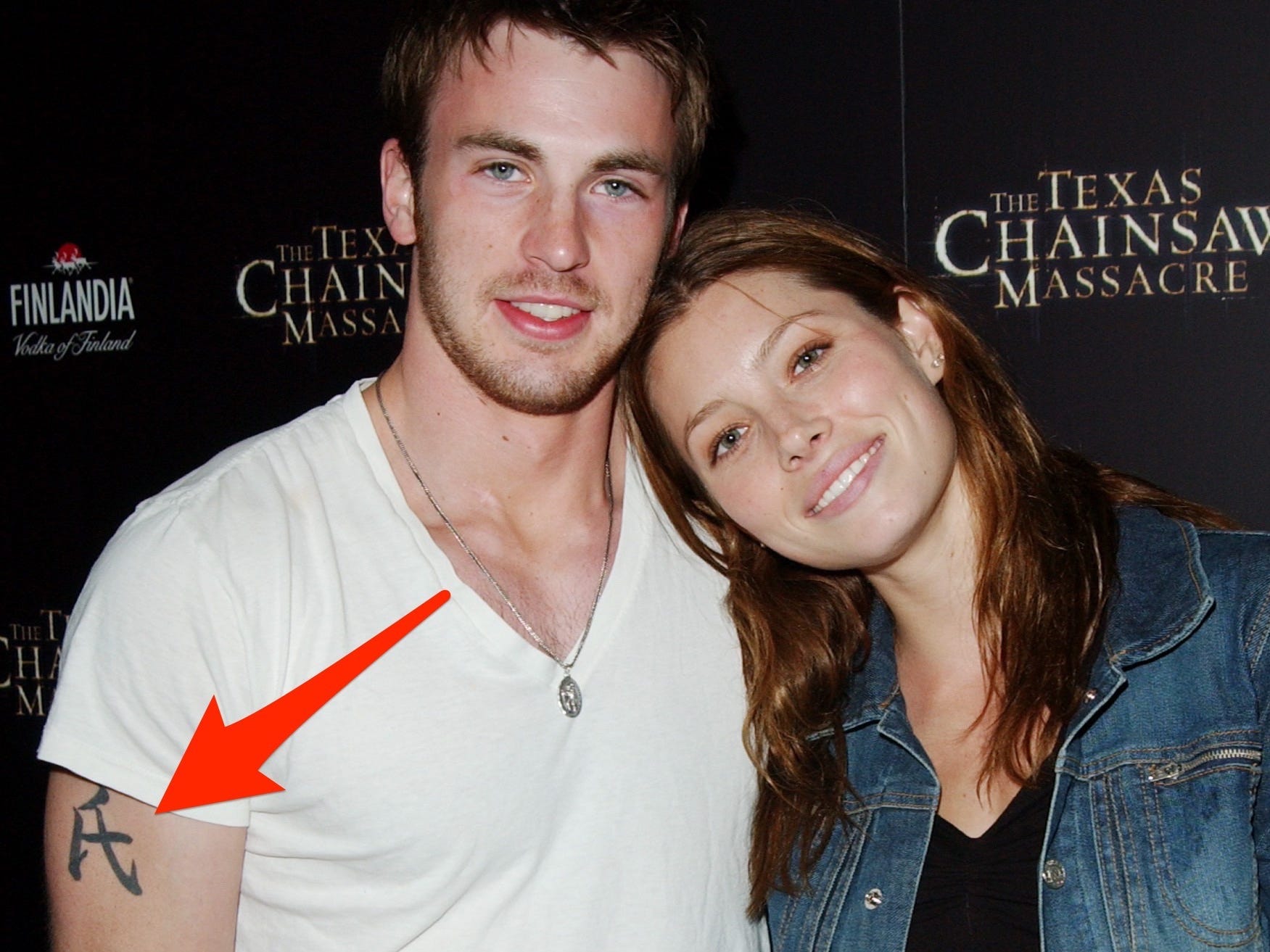 The tattoo was visible when he posed on a red carpet in October 2003 with then-girlfriend Jessica Biel. It was also seen during one of his scenes with Biel in the movie “Cellular,” in which they played exes.

According to Page Six, Evans thought the symbol represented “family,” but the correct translation is “surname.”