Photos show Beijing glowing yellow in the worst sandstorm for a decade: 'It looks like the end of the world' 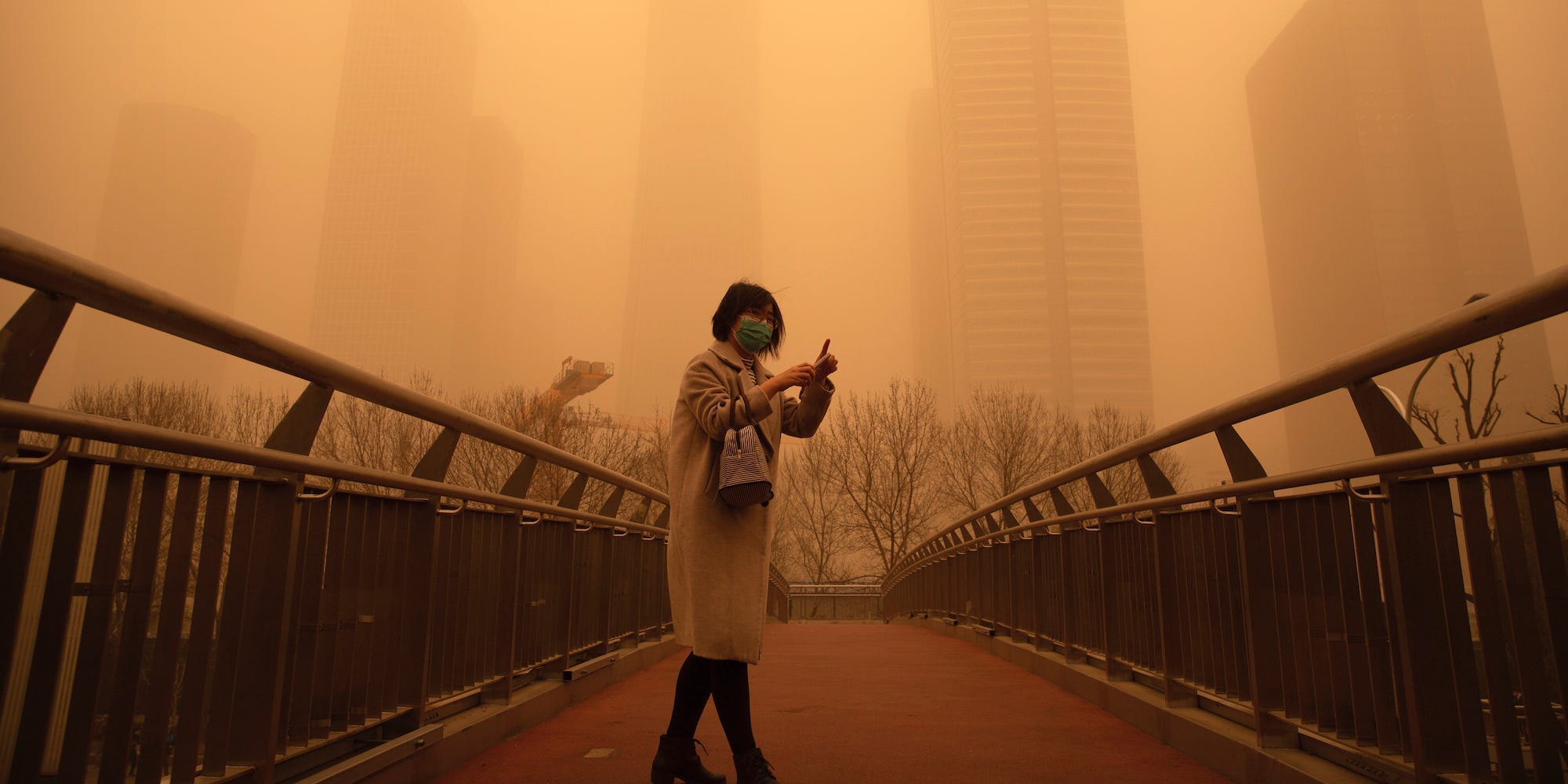 AP Photo/Mark SchiefelbeinA woman walks along a pedestrian bridge amid a sandstorm during the morning rush hour in Beijing, March 15, 2021.

The Chinese capital of Beijing was covered in yellow haze on Monday as it was blanketed in a huge sandstorm that caused widespread disruption and spiking air pollution levels.

Photos showed the city glowing yellow and buildings obscured as winds blew sand into the city: 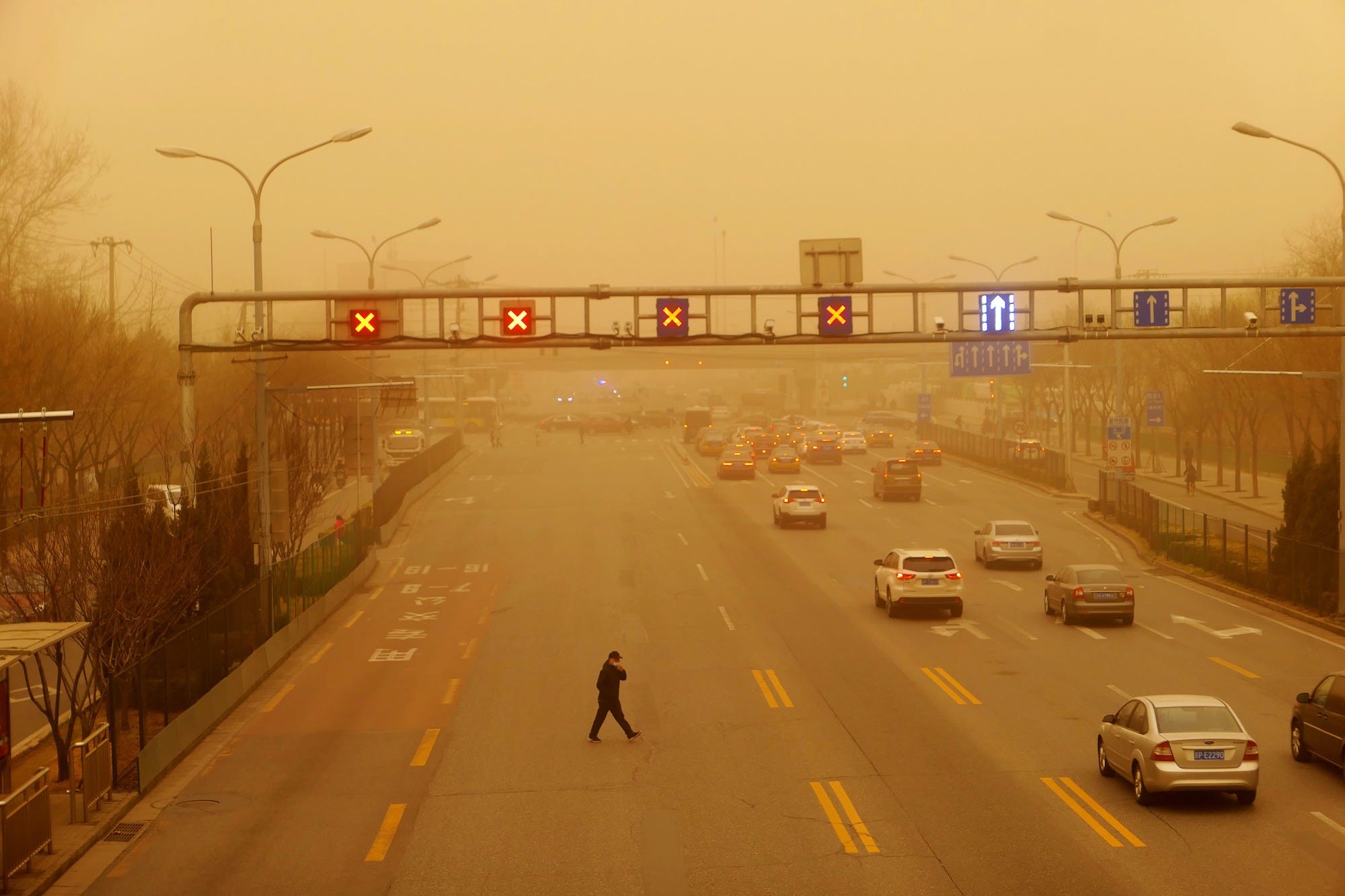 Costfoto/Barcroft Media via Getty ImagesA Beijing road during a sandstorm on March 15 2021.

The China Meteorological Administration said on Monday that sandstorms had reached provinces across northern China, including Hebei – the province that surrounds Beijing – after they already hit Inner Mongolia.

The sand is being blown in from the Gobi desert in Inner Mongolia, Reuters reported. 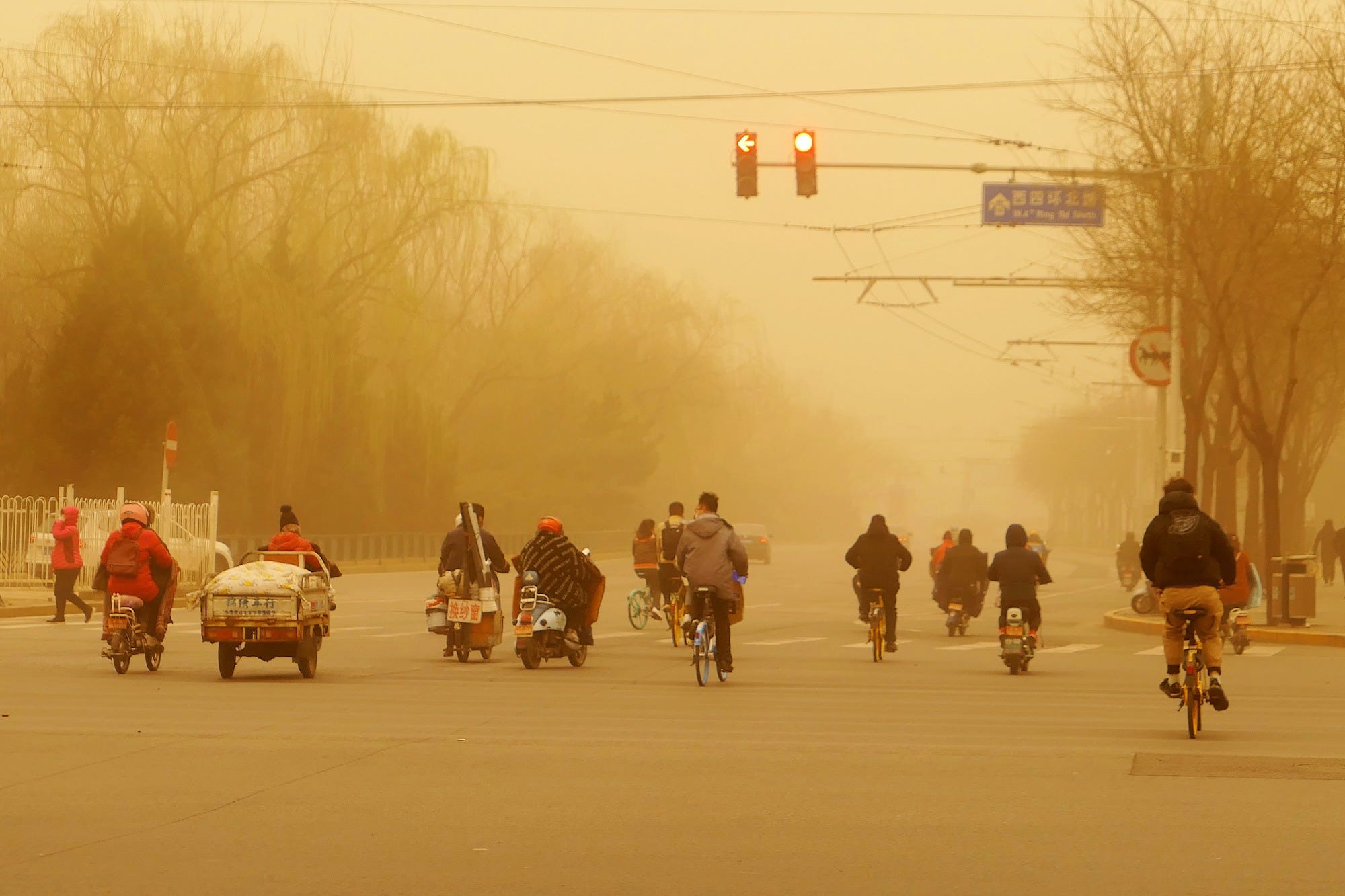 The Air Quality Index gave the city a “hazardous” 999 rating on Monday, which means “everyone may experience more serious health effects” and that “everyone should avoid all outdoor exertion.” 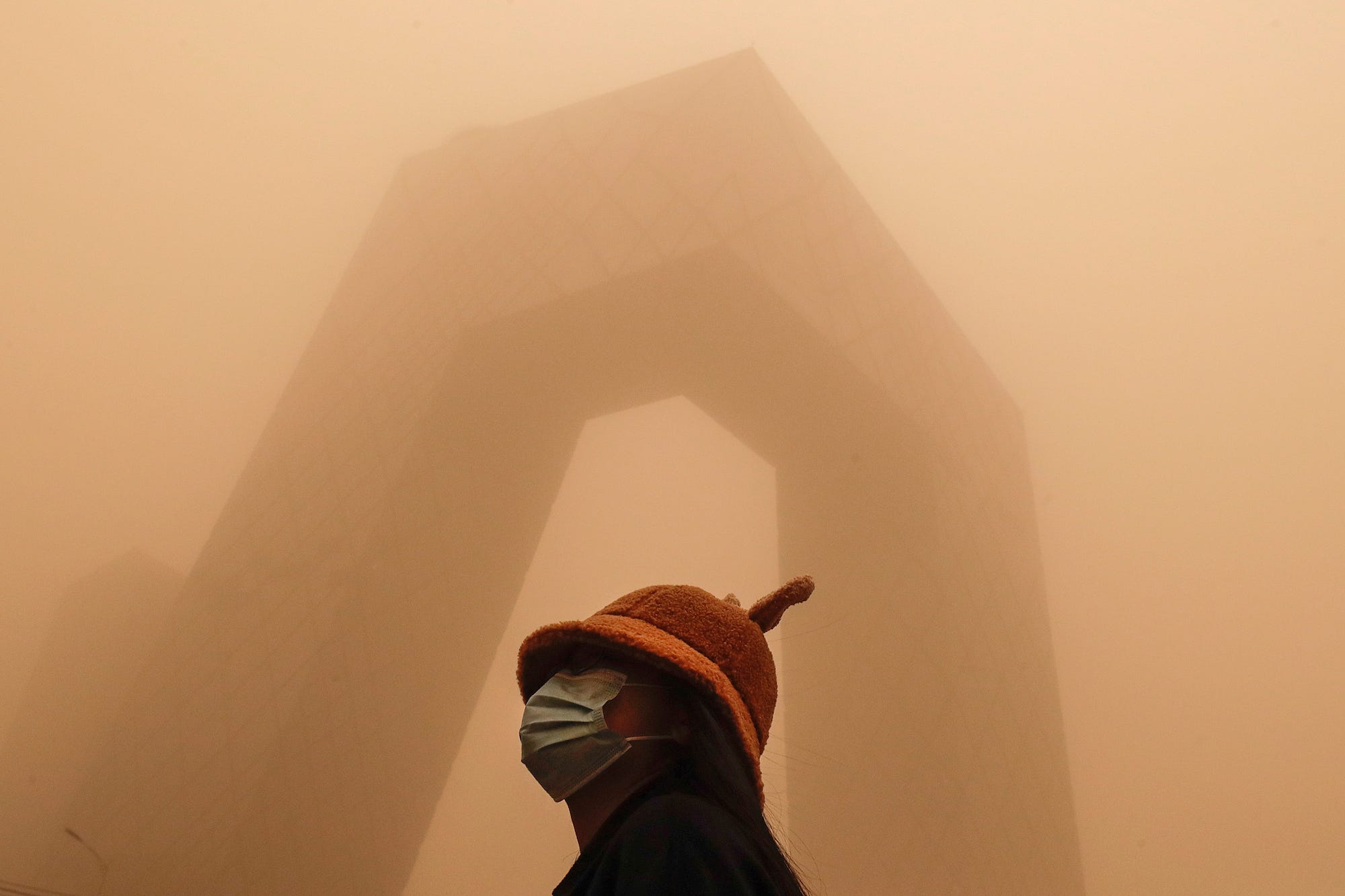 AP Photo/Andy WongA woman wearing a face mask to help curb the spread of the coronavirus stands against the China Central Television (CCTV) building as capital city is hit by polluted air and a sandstorm in Beijing, Monday, March 15, 2021.

Flora Zou, who lives in Beijing, told Reuters: “It looks like the end of the world.”

“In this kind of weather I really, really don’t want to be outside,” she said.

Sandstorms typically occur in Beijing at this time of year.

But the China Meteorological Administration called this one the biggest in a decade, Reuters reported. 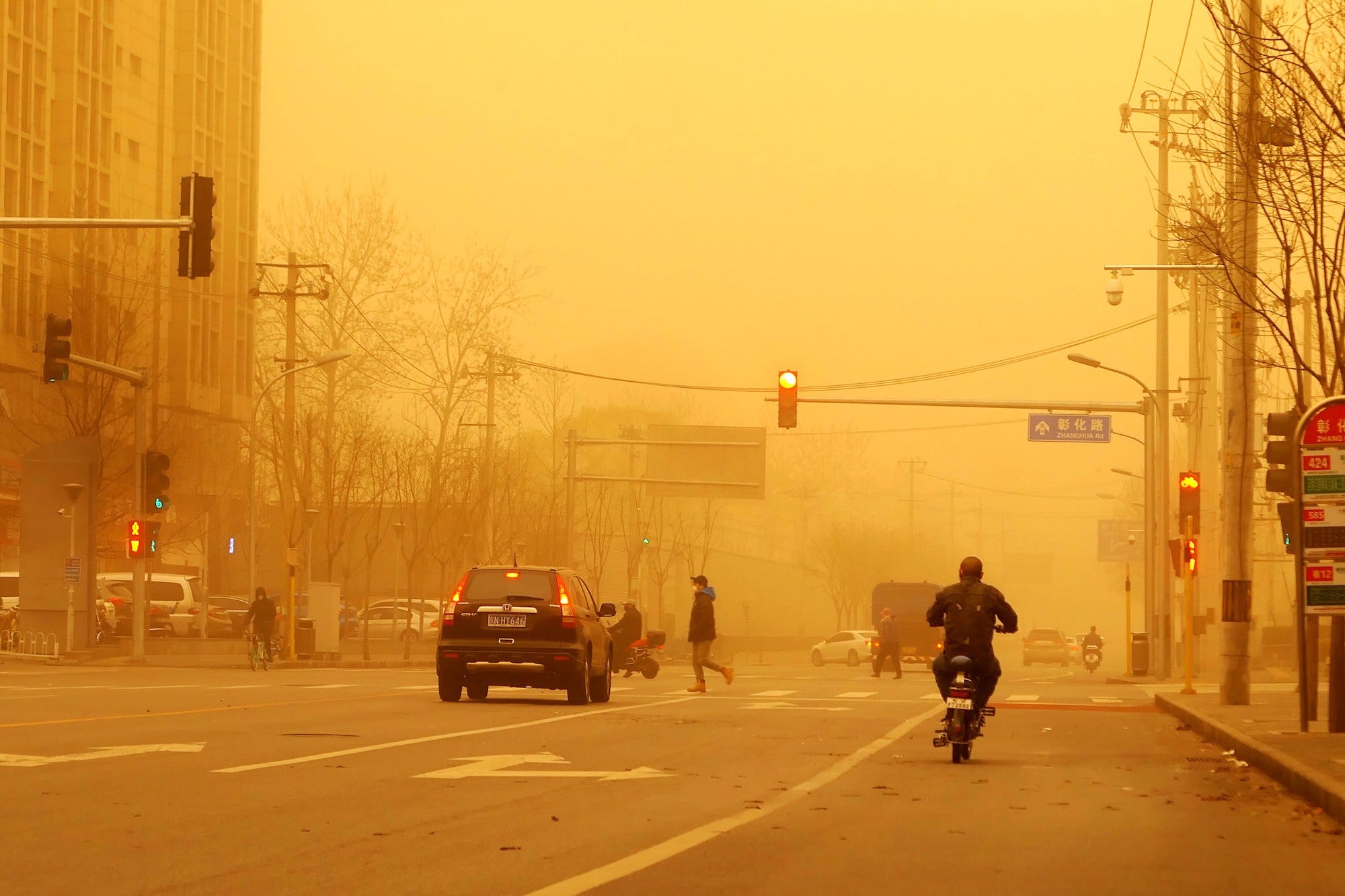 The Guardian reported that levels of PM2.5 air pollution particles were above 600 micrograms in some parts of the city.

The particles can get into the lungs, and the World Health Organization recommends average daily concentrations of just 25.

The WHO says that the particles “can penetrate the lung barrier and enter the blood system” and that “chronic exposure to particles contributes to the risk of developing cardiovascular and respiratory diseases, as well as of lung cancer.”

China has been trying to plant more trees to slow this erosion, and to trap sand and dust being blown in from nearby deserts. 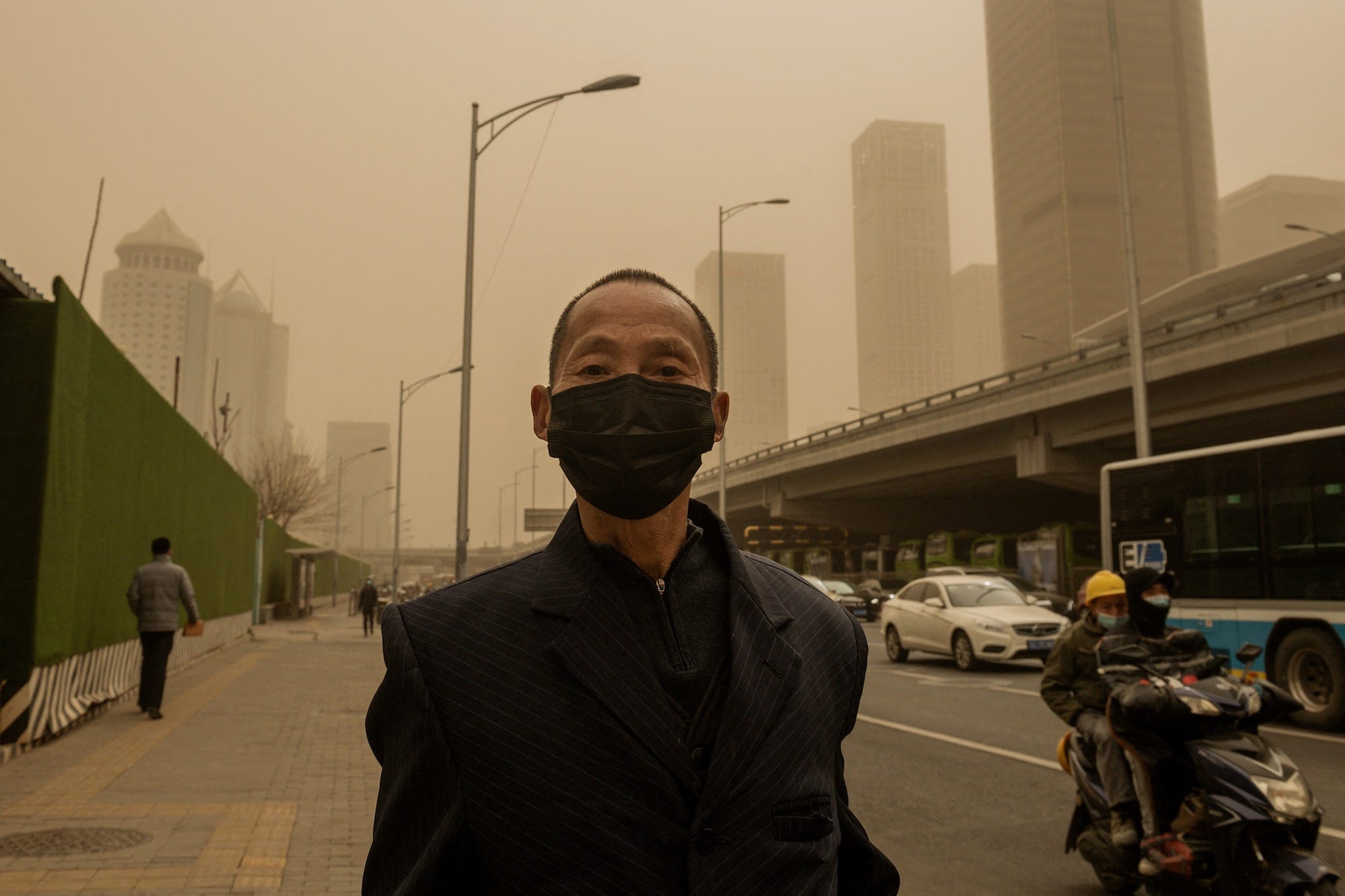 NICOLAS ASFOURI/AFP via Getty ImagesA man walks on a street during a sandstorm in the financial district in Beijing on March 15, 2021.