China is set to pass a draconian new law in Hong Kong that would effectively stifle all dissent. Here's what could happen to people in the city. 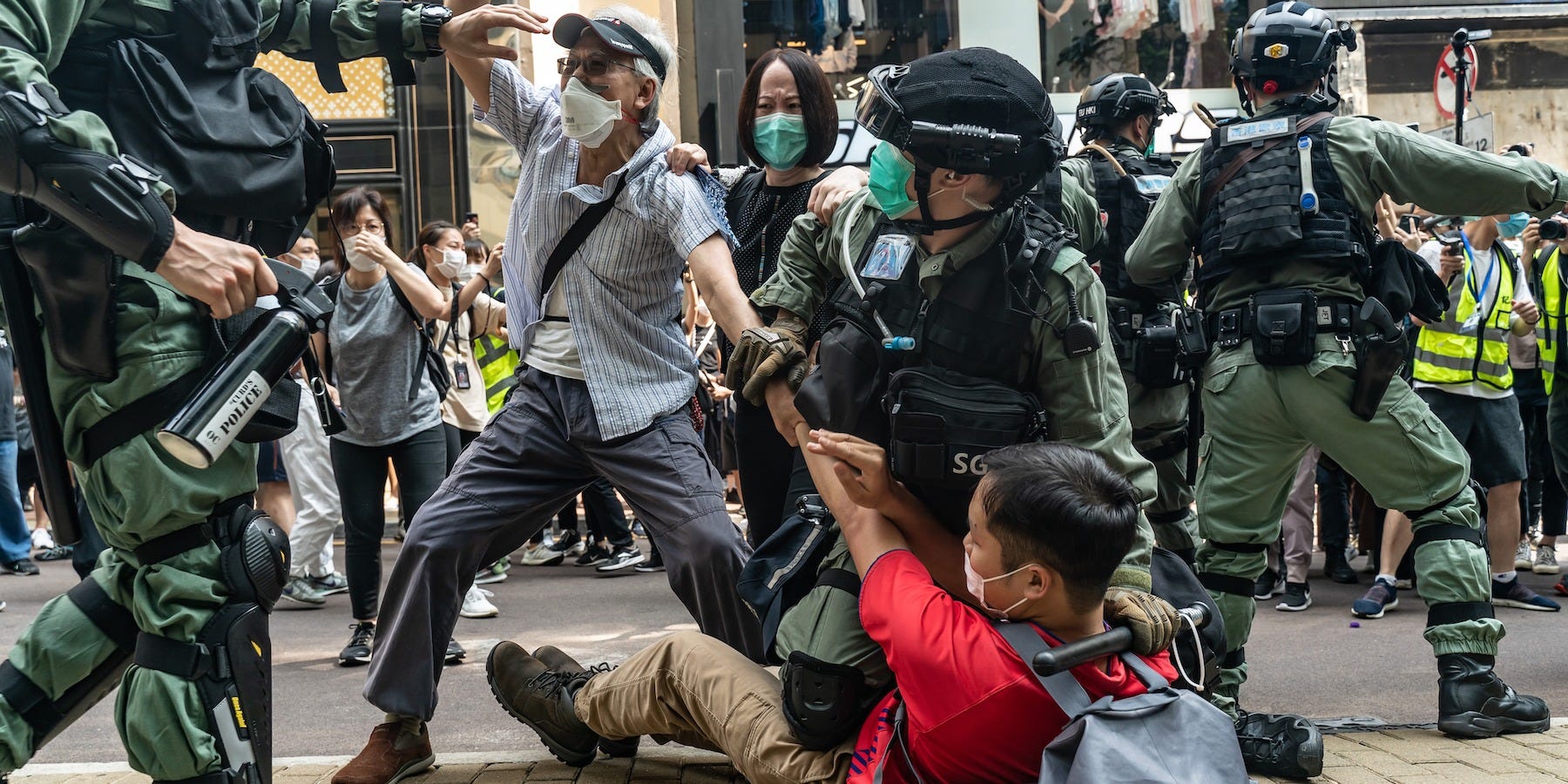 Anthony Kwan/Getty ImagesRiot police scuffle with the public in Hong Kong’s Causeway Bay district on May 27, 2020, after the announcement that China was seeking to pass new national-security laws for the city.

China is set to pass draconian new national-security laws in Hong Kong that would effectively stifle any dissent in the semi-autonomous city.

The country plans to pass the new laws on Thursday, which critics say would effectively erode Hong Kong’s freedoms. The city is part of China, but operates under a separate constitution and judiciary.

Under the new laws, China would be allowed to set up new national-security agencies, as well as a formal secret police presence, in Hong Kong.

The plan for these laws have renewed these protests, which overtook the city for months last year before being paused by the outbreak of the coronavirus. Police have fired tear gas, rubber bullets, and pepper spray.

In 2019, protests were sparked by a now-shelved bill that would allow Hong Kong residents to be extradited to China, but spiralled into a wider movement against police brutality and in support of the city’s independence from Beijing. 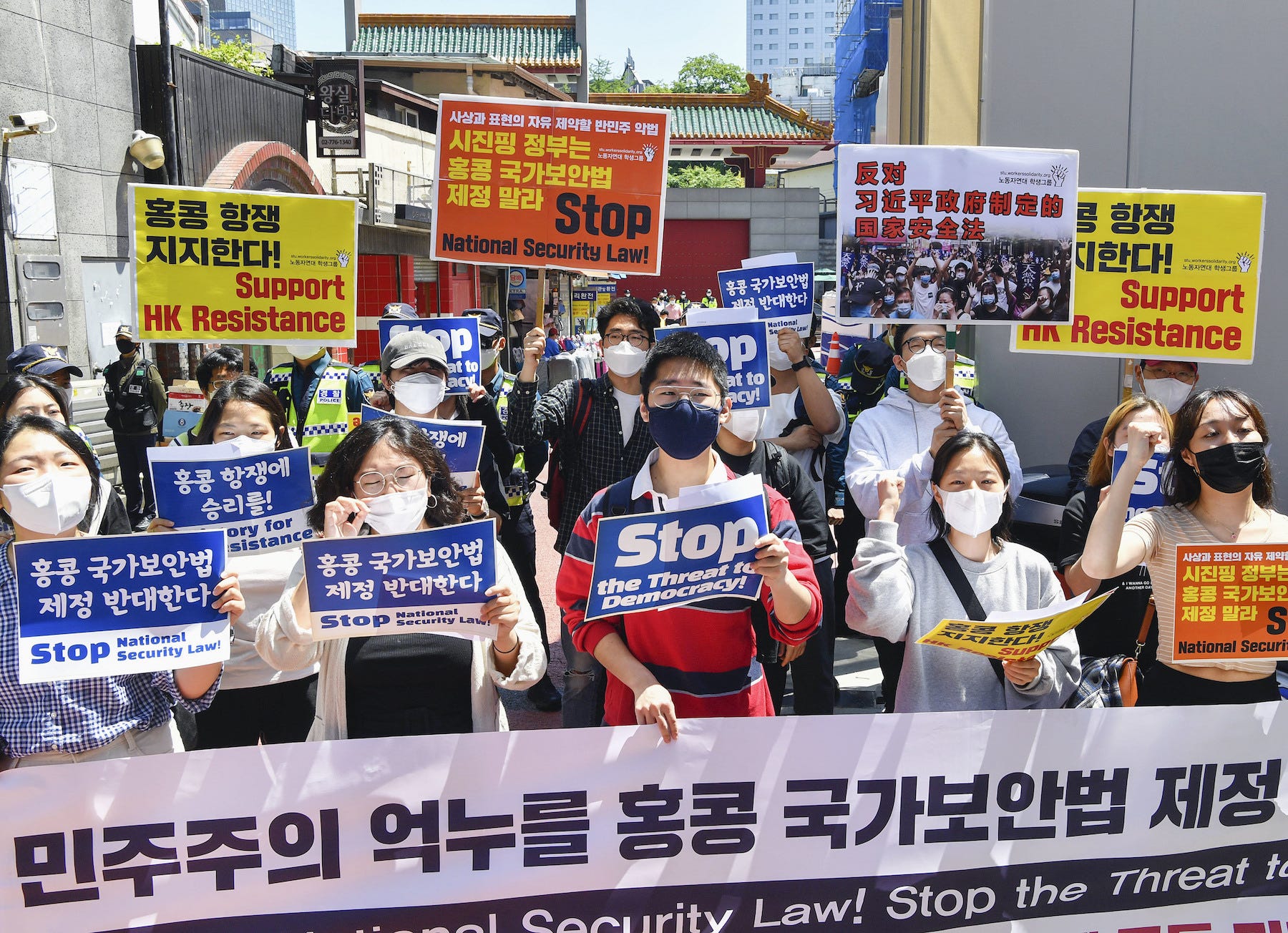 Kyodo News via Getty ImagesProtesters gather in front of the Chinese Embassy in Seoul on May 27, 2020, to oppose China’s national-security law.

The new proposed laws seem to target these kind of protests directly, as they say the measure is needed to “prevent, stop and punish foreign and overseas forces using Hong Kong to conduct separatist, subversion, infiltration and damaging behaviour.”

China has repeatedly blamed the protests on foreign interference in the city.

On Tuesday, the head of China’s military garrison in Hong Kong vowed to protect China’s national-security interests and would “act with firm resolve” to implement China’s plans for the city.

The laws raise risks for individual protesters and anyone else who speaks out against the Chinese government. Many such individuals have already been tortured and detained, and the new bill could give law enforcement the powers to increase these actions.

Here’s what people in the city might experience if the new laws are put in full force.

Disappearing and torturing you to extract the confessions they want

Simon Cheng Man-kit, a UK consulate employee in Hong Kong, was accused of engaging in prostitution and was detained in 2019.

He said he was tortured and was pushed for information about the protesters, as well as being accused of being a spy and interrogated about what China said was the UK’s role in the protests.

Police later released a video “confession” where he said he would “never make the same mistake again.”

Cheng said he was locked in a metal device that restricted his movement while he was interrogated, as well as being shackled in a spread-eagle pose.

He said he was questioned for hours at a time by officers, sometimes in plainclothes, and forced to squat for hours before being hit a baton so he would fall over. 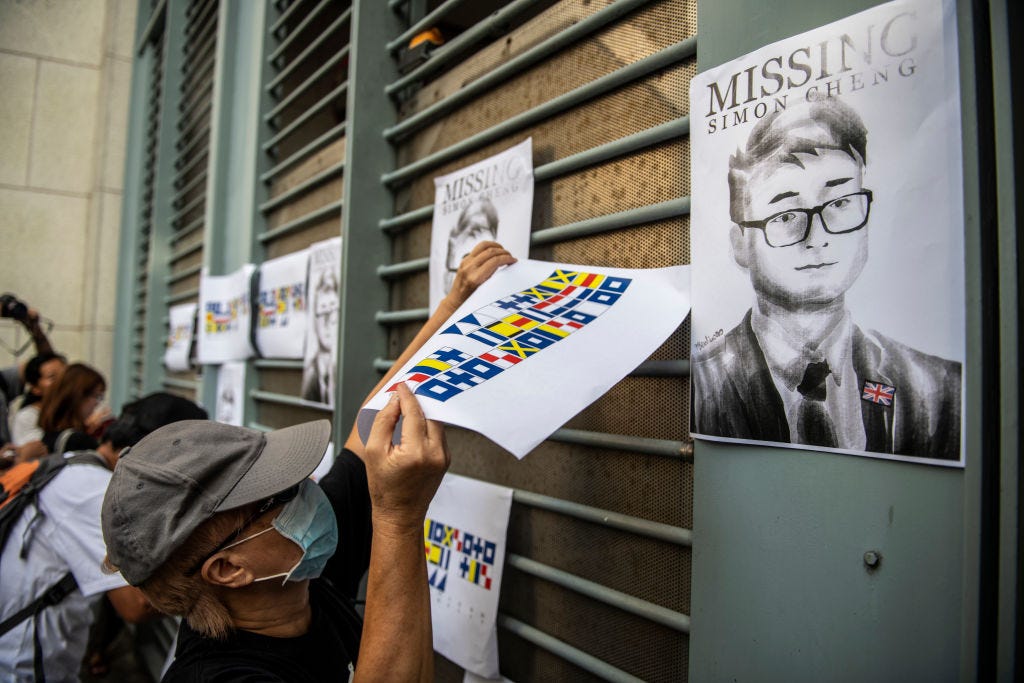 Vernon Yuen/NurPhoto via Getty ImagesPetitioners stick banners outside the British Consulate in Hong Kong on August 21, 2019, urging the British Government to help secure the release of Simon Cheng.

He also said he was denied a lawyer and that the interrogations were designed to try and get proof for China’s theories.

Lam Wing-Kee, a bookseller in Hong Kong, also claimed that he was detained and interrogated for months after he and five others disappeared after distributing books about China’s Communist Party that are banned in mainland China.

Putting your family on house arrest

China is no stranger to putting critics under house arrest to stop them from speaking out.

It has also done this to family members of people accused of endangering China’s national security, even if they have no broken any laws themselves.

Liu Xia, the husband of detained human-rights activist Liu Xiaobo, was stopped from flying to Norway in 2010 and ended up detained in her house and placed under surveillance for eight years before being released. She is still largely unable to freely speak to media or appear in public. 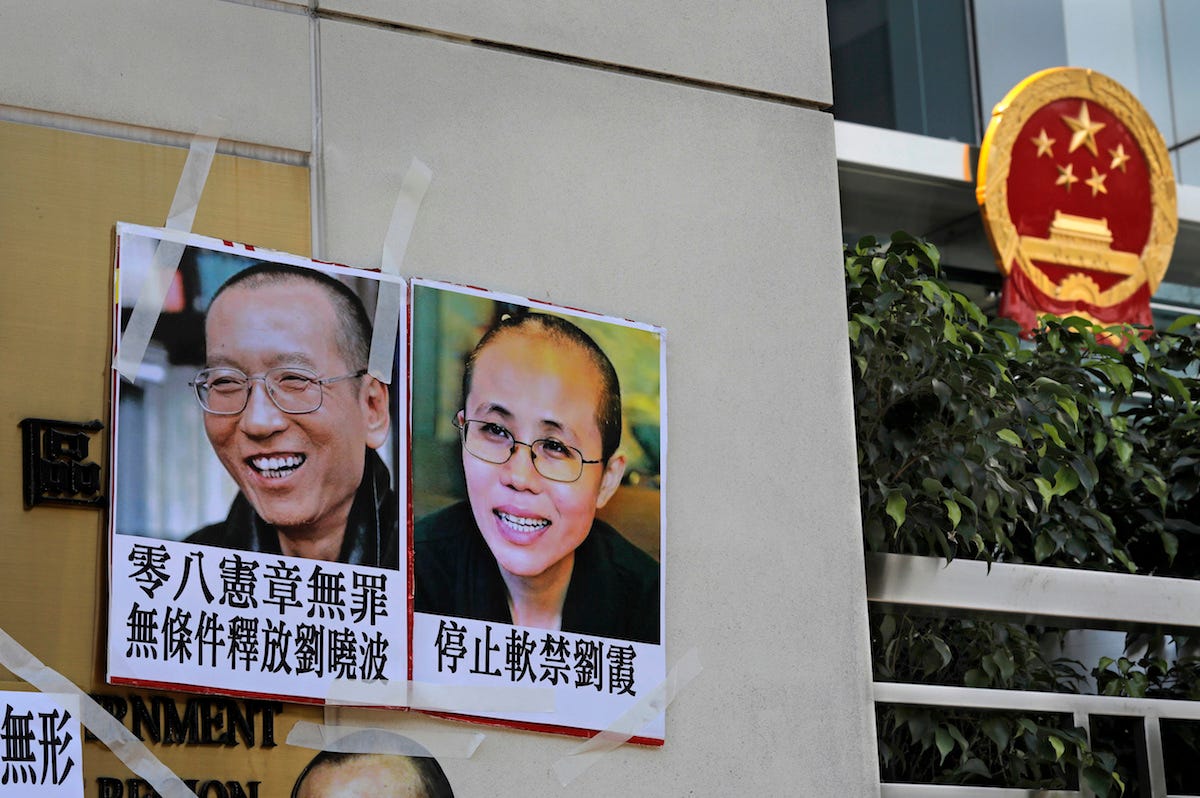 Vincent Yu/APProtesters display portraits of Liu Xiaobo and Liu Xia, who was detained in China at the time, at a demonstration outside the Chinese liaison office in Hong Kong in June 2017.

Tracking you through facial recognition

China already uses the technology extensively, like in Xinjiang, where China essentially operates a police state to monitor the Uighur population and has detained almost a million Uighurs in prison-like “re-education” camps.

‘They are killing Hong Kong’

Hong Kong has a high level of autonomy from China thanks to the “one country, two systems” policy arranged with the UK government when it returned the city to China in 1997.

That policy was supposed to continue in full force until 2047, but is now under increased threat from the proposed new laws.

“This is a complete and total surprise and I think it means the end of one ‘country, two systems,'” he said. 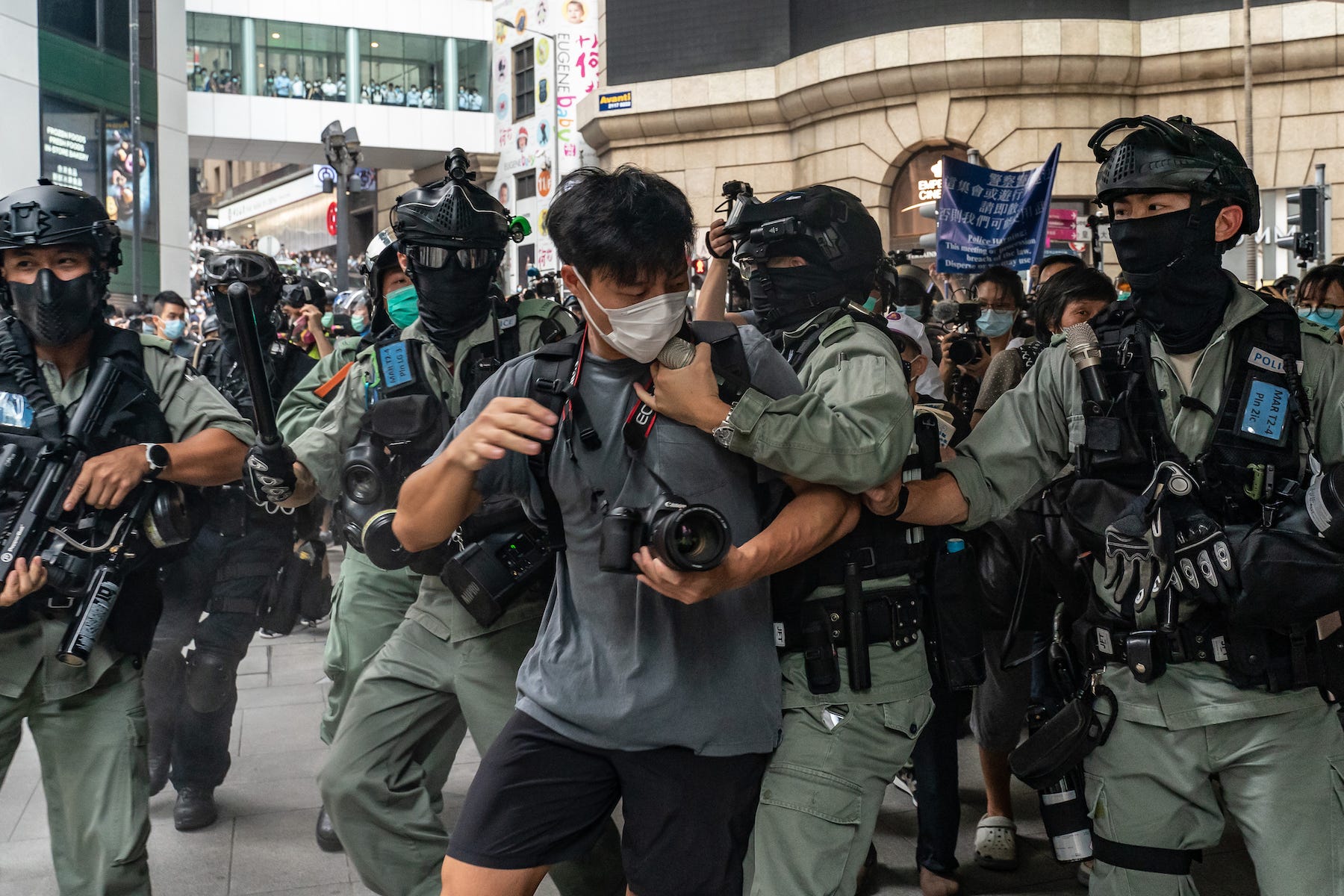 Anthony Kwan/Getty ImagesA pedestrian is detained by riot police in Hong Kong on May 27, 2020.

Kwok also said China was using the coronavirus to push the change through and avoid global scrutiny.

“When the world is not watching, they are killing Hong Kong, killing ‘one country, two systems,’ and using social distancing rules to keep people from coming out to protest,” he said.

At the height of Hong Kong’s coronavirus outbreak, the city’s government limited public social gatherings to four people, before expanding it to eight. The city extended the limits to June 4, the anniversary of the 1989 Tiananmen Square killings in China, and a day when many Hong Kongers get to freely protest China.

“This is the most devastating thing to happen to Hong Kong since the hand­over,” Kwok said.

Ben Bland, a research fellow at Australia’s Lowy Institute and author of a book on Hong Kong, told Business Insider’s Rosie Perper that China’s decision to thrust these new laws onto Hong Kong “represents a major blow to Hong Kong’s freedoms and autonomy.”

Chris Patten, who served as the city’s last British governor,called the proposal a “comprehensive assault on the city’s autonomy, rule of law, and fundamental freedoms.”

Eric Cheung, from Hong Kong University’s law department, told Reuters: “It is essentially declaring directly that ‘one country two systems’ is null and a failure.”