China's economy suffers its first contraction in 28 years, shrinking 6.8% in an 'extraordinary shock' to the global economy STR/AFP via Getty ImagesMedical staff members posing for a group photo in the Chinese city of Bozhou on April 10 after returning home from helping with the COVID-19 coronavirus recovery effort in Wuhan.

China’s economy shrank in the first three months of 2020, its first contraction since 1992, as production and spending were frozen by the country’s coronavirus lockdown.

The National Bureau of Statistics reported on Friday that gross domestic product fell by 6.8% during the quarter. China hasn’t reported a full year of contraction since the 1970s.

The sharp contraction reflects the weakness in consumer spending and investor confidence while the novel coronavirus has flattened economies around the world. The central Chinese city of Wuhan, where the virus first emerged, revised its death toll about 50% higher on Friday, to 3,869 from 2,579, as the city said it had developed a clearer picture over time.

The economic data released Friday showed that industrial production fell by 1.1% year-on-year, retail sales of consumer goods fell 19%, investment in fixed assets fell by 16.1%, and imports and exports were down by 6.4% – all worse than estimated.

China was keen, however, to present positives, saying that overall national economic and social development in the first quarter was stable despite the outbreak of COVID-19.

“The result modestly is on the rosy side of what we believe actually happened in Q1,” said Miguel Chanco, a senior Asia economist at Pantheon.

“But the official data were very close to the reality in the grand scheme of things, and that should be welcomed, despite the damning picture they paint,” he said of China’s statistics. 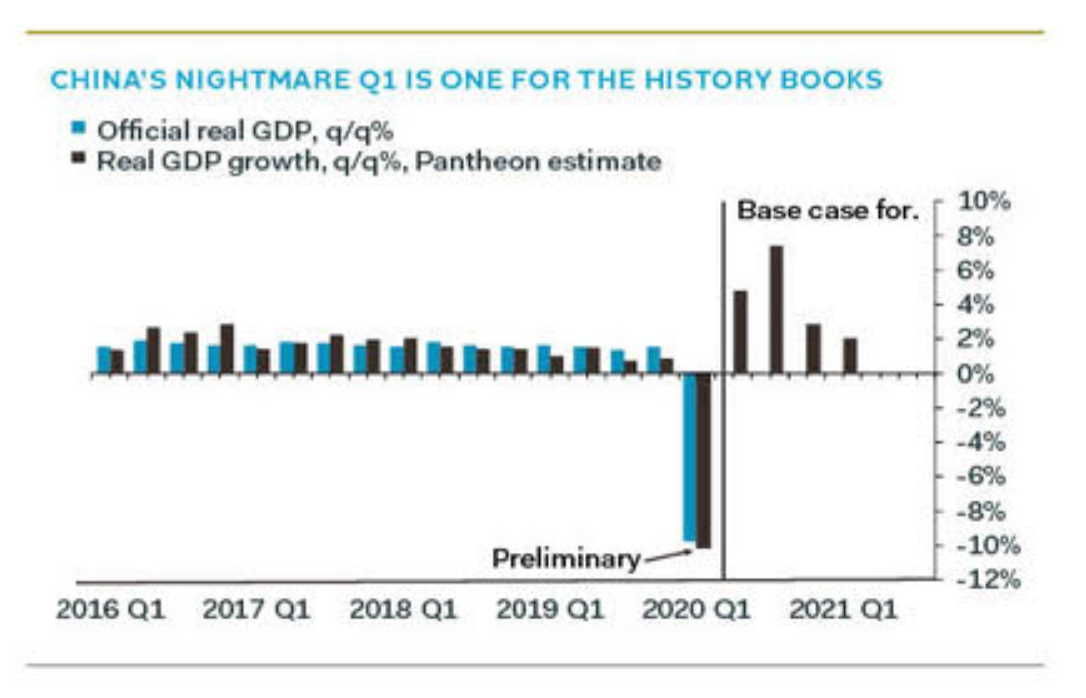 Chanco also said analysts at Pantheon expected a full-year contraction, though he noted that “official headlines are unlikely to show that.”

The American economist Nouriel Roubini remarked on Friday that the decline in China’s GDP was a “depression rate of economic collapse.” Roubini said the start of April showed positive economic growth for the country but the collapse in the first quarter was “staggering.”

“A 6.8% drop in GDP is an extraordinary shock to the Chinese economy, and by implication the rest of the world,” said Richard Pearson, the director at the investment platform EQi.

Pearson suggested that China’s data was an important indicator in considering the impact for the West while it is still in the throes of the pandemic. He said he believed the impact would be more severe on the West because of the difference in nature of government responses, which seemed to have resulted in lower recorded deaths in China.

Connor Campbell, a financial analyst at SpreadEx, had a different view. He said that “given some analysts were expecting a first quarter [China] contraction of nearly 11%, there is perhaps a paper-thin reason to take a chirpy view of the data.”