China is diagnosing coronavirus patients by looking for 'ground glass' in their lungs. Take a look at the CT scans.

Associated PressA medical staffer works with test systems for the diagnosis of coronavirus, at the Krasnodar Centre for Hygiene and Epidemiology microbiology lab in Krasnodar, Russia, February 4, 2020. Russia has closed its land border with China and suspended most train traffic between the countries.

It was the most cases reported in a single day since the outbreak began in December. The Hubei Health Commission also reported that an additional 242 people had died.

But the virus didn’t suddenly become more aggressive – instead, Hubei officials said they changed the way they count cases. Rather than relying only on blood tests, which are in limited supply and can take take days to yield results, officials have started including diagnoses made via CT scans in their daily case totals.

The scans are considered less thorough than a blood test, but the New York Times reported last week that doctors in Wuhan, where the virus originated, are running short on test kits.

Patients diagnosed via CT scan – what Chinese officials call “clinically diagnosed cases” – present symptoms of the virus in their lungs, but either haven’t been lab-tested or died before the test could be administered.

The latest figures suggest the virus has killed at least 1,370 people and infected more than 60,000 in total. That number is expected to rise significantly as CT scans capture more cases in the coming days.

Here’s what physicians look for in the scans.

Normal lungs should appear black on a CT scan.

It’s common to have small masses of tissue, or lung nodules, that show up as tiny white dots.

But coronavirus scans tend to have white patches that radiologists refer to as “ground glass opacity.” 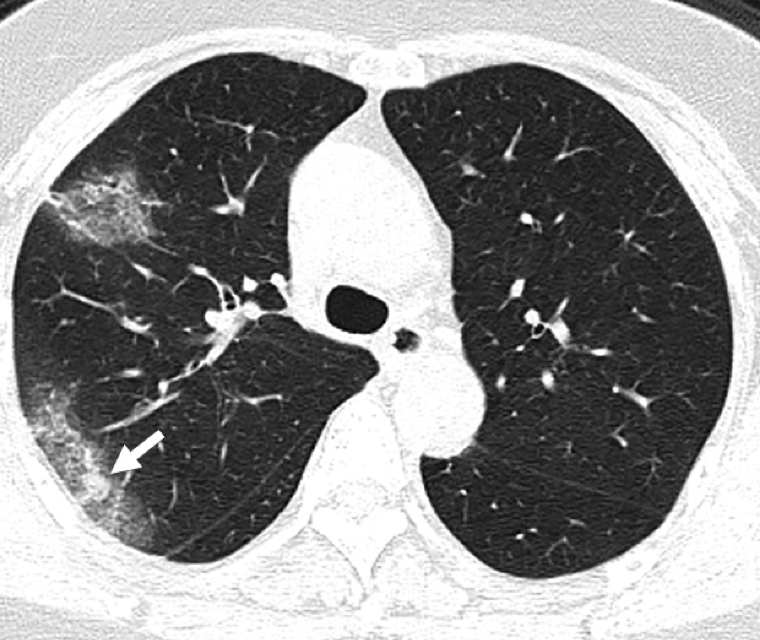 “It kind of looks like faint glass that has been ground up,” Paras Lakhani, a radiologist at Thomas Jefferson University, told Business Insider. “What it represents is fluid in the lung spaces.”

On its own, Lakhani said, ground glass isn’t particularly helpful for identifying a coronavirus.

“You can see it with all types of infections – bacterial, viral, or sometimes even non-infectious causes,” Lakhani said. “Even vaping could sometimes appear this way.”

But the patches are significant, he added, when they extend to the edges of the patient’s lungs.

Both SARS and MERS are also coronaviruses. An outbreak of the former in China resulted in 8,000 cases and 774 deaths from November 2002 to July 2003.

An analysis of nearly 140 coronavirus scans said patches of ground glass on both lungs were a hallmark of the virus. 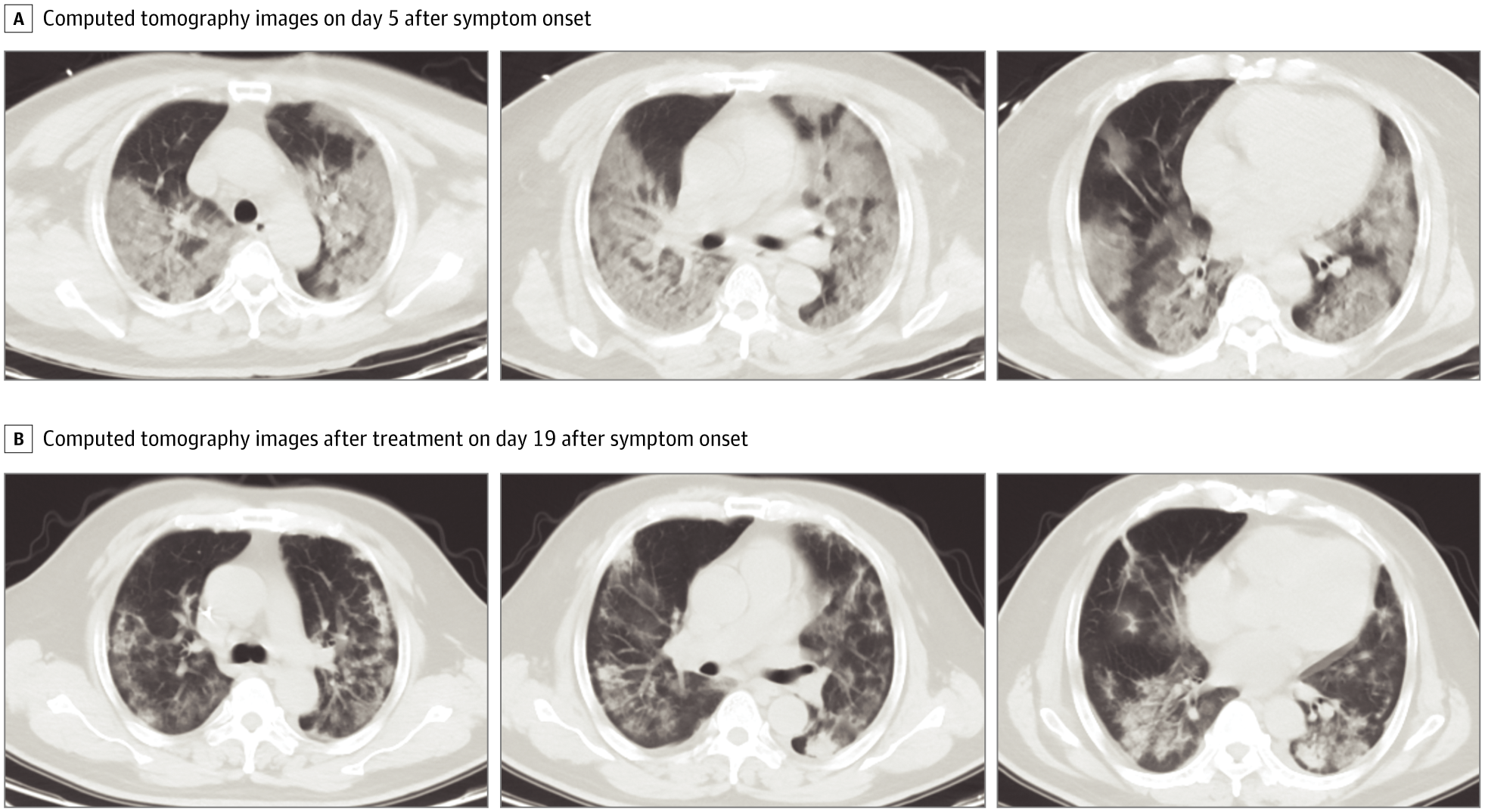 Researchers analysed scans from patients at the Zhongnan Hospital of Wuhan University, the majority of whom were older men with preexisting health problems. The images above are scans from a 52-year-old patient.

The first group of scans (group A) were taken on January 7, five days after the patient started displaying symptoms. They show patches of ground glass at the bottom of both lungs.

The man was put on life support from January 7 to 12. After that, his condition seemed to improve. The second set of scans (group B), taken January 21, show that many of the white patches either shrunk or disappeared.

Many patients tended to worsen quickly. Their ground-glass patches became more pronounced after a few days.

A 33-year-old woman arrived at a hospital in Lanzhou, China with a fever and five-day-old cough. Her temperature was 102 degrees Fahrenheit, her breathing was “coarse,” and she had a low white blood cell count – a sign of infection.

In an initial CT scan, researchers at the First Hospital of Lanzhou University found the recognisable white ground-glass patches in the lower corner of her lungs.

They gave her a protein used to treat viral infections, called interferon. But three days later – and further into her treatment – the patches were more pronounced. Lakhani said the same thing occurred in SARS patients.

“If you didn’t know about this outbreak, you’d read the scan and you would just say, ‘OK, this patient has pneumonia,’ because that’s the most common thing we see,” he said.

But Lakhani added that “pneumonia usually doesn’t rapidly progress,” so it could be ruled out in this case.

Scans from a 27-year-old woman who worked in Wuhan showed a “ground-glass halo” — white patches that surround a small nodule.

Researchers at Anhui Medical University in Hefei, China examined the woman after she was admitted for a fever and cough. Her breathing was also coarse. The “ground-glass halo” they found can be a distinguishing feature of viral infections and pneumonia, the researchers said.

After four days in the hospital, the nodule on the patient’s right lung had grown.

Some patients also exhibited a “crazy-paving pattern,” which refers to little lines inside the ground-glass patches. 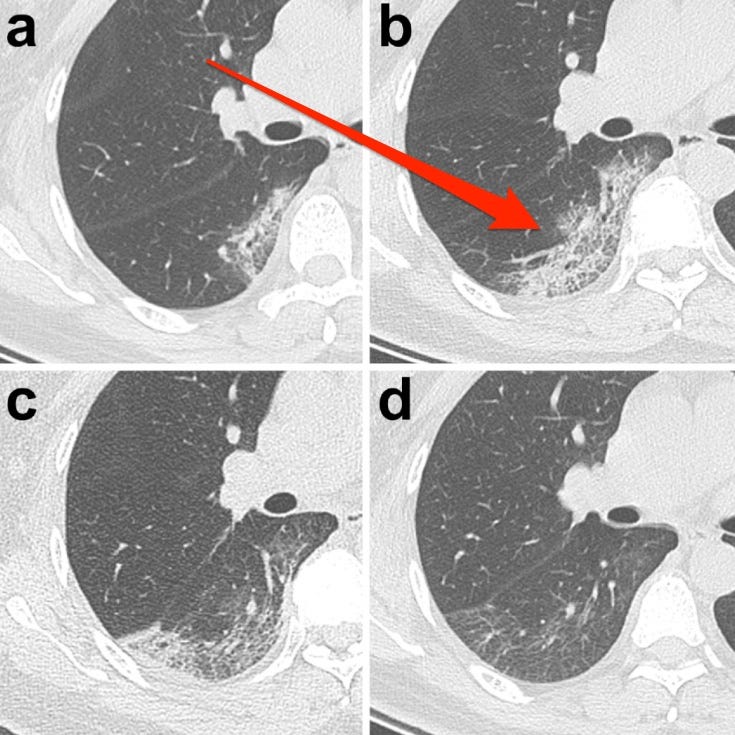 A study of 21 patients across three Chinese provinces found four patients with a “crazy-paving pattern” in their scans.

“It almost looks like a cobblestone road,” Lakhani said. “Sometimes when we see it, it’s everywhere – the whole lung has it. But to see it in a few small areas is a little less common, a little more unusual.”

The pattern has also appeared in some SARS and MERS scans, he said.

Another study of patients who recovered from the coronavirus suggested that crazy-paving could be common among patients with milder cases.

A Shanghai study also identified a mesh-like pattern called “reticulation,” which is visible in this scan of a 75-year-old man. 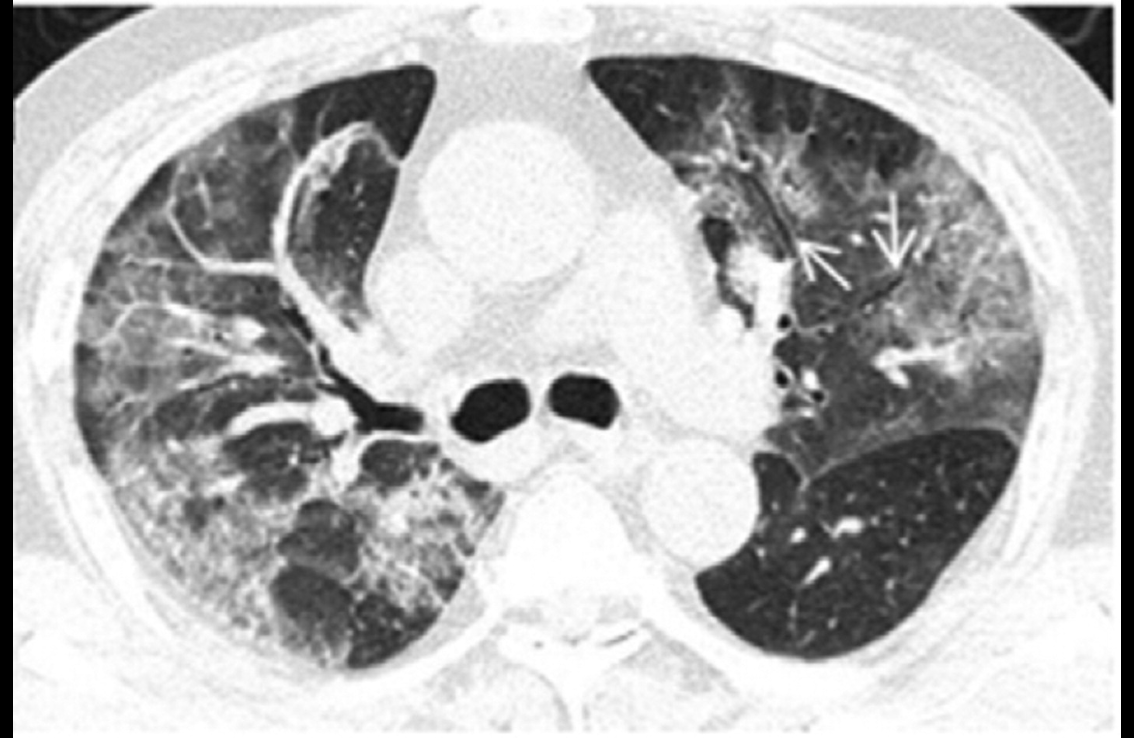 Researchers at the Shanghai Public Health Clinical Centre analysed this patient’s scan three days after the man was admitted to the hospital. In addition to ground glass, it shows a web-like “reticulation” pattern – a sign of lung damage commonly associated with acute respiratory distress syndrome (ARDS).

A recent study in The Lancet found that the coronavirus can lead to ARDS, which is often fatal.

According to the Shanghai researchers, 22% of the 50 patients they looked at displayed reticulation on their scans. Around 77% had ground-glass patches, while nearly 60% had consolidation – lung tissue that filled with liquid instead of air.

The Shanghai researchers ultimately determined that three components are needed to diagnose a coronavirus patient: fever and/or cough, ground-glass patches in both lungs, and a history of exposure to individuals from Wuhan.

But the coronavirus doesn’t always show up in scans right away.

“We can’t rely on CT alone to fully exclude presence of the virus,” Michael Chung, the lead author of the Lanzhou study, said on February 3.

Lakhani said CT scans are “one of four or five things” needed to make a diagnosis, along with symptoms, clinical history, the progression of the disease, and the laboratory test.

Photos from inside the Diamond Princess cruise ship, where thousands of passengers have been quarantined for a week because of the coronavirus outbreak

The US has confirmed 15 cases of the coronavirus across 7 states. Here’s what we know about all the US patients.

I was travelling in South Korea as the coronavirus struck, and I was amazed at how the country sprang into action