Chicago teachers follow up a historic 2019 strike with a 2020 ultimatum: schools won't open in person 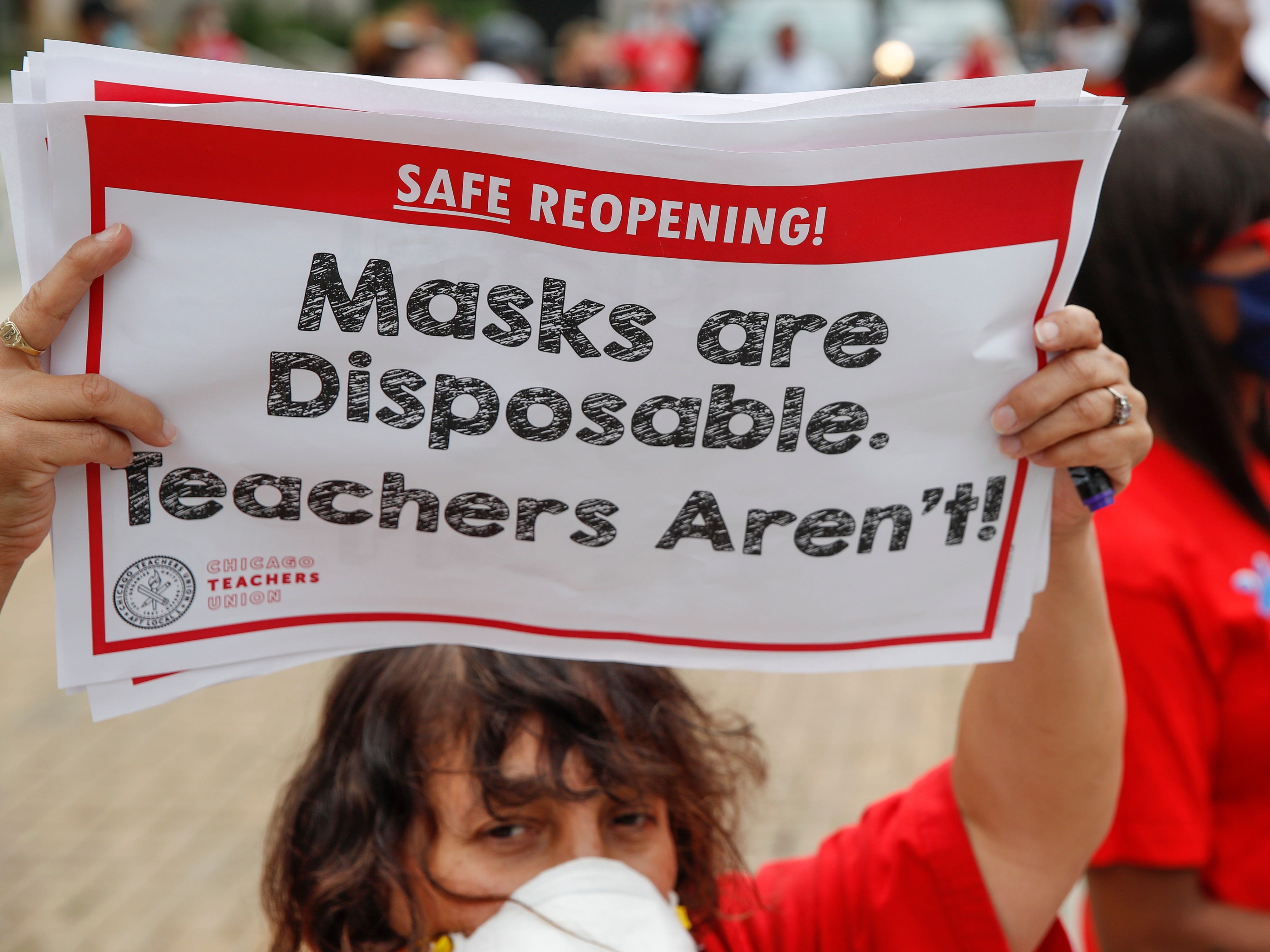 Last Monday, teachers across the country rallied in a national day of action to protest plans to reopen schools for in-person learning amid rising coronavirus cases.

Sarah Chambers, a special-ed teacher at Alcott High School in School in Chicago’s West Lakeview neighbourhood, was one of them.

“We shouldn’t have had to fight for our students’ lives,” Chambers told Business Insider. “There are teachers writing their wills.” Chambers said over 500 people participated in a car caravan to Chicago’s City Hall; it took some cars almost all day to arrive there. 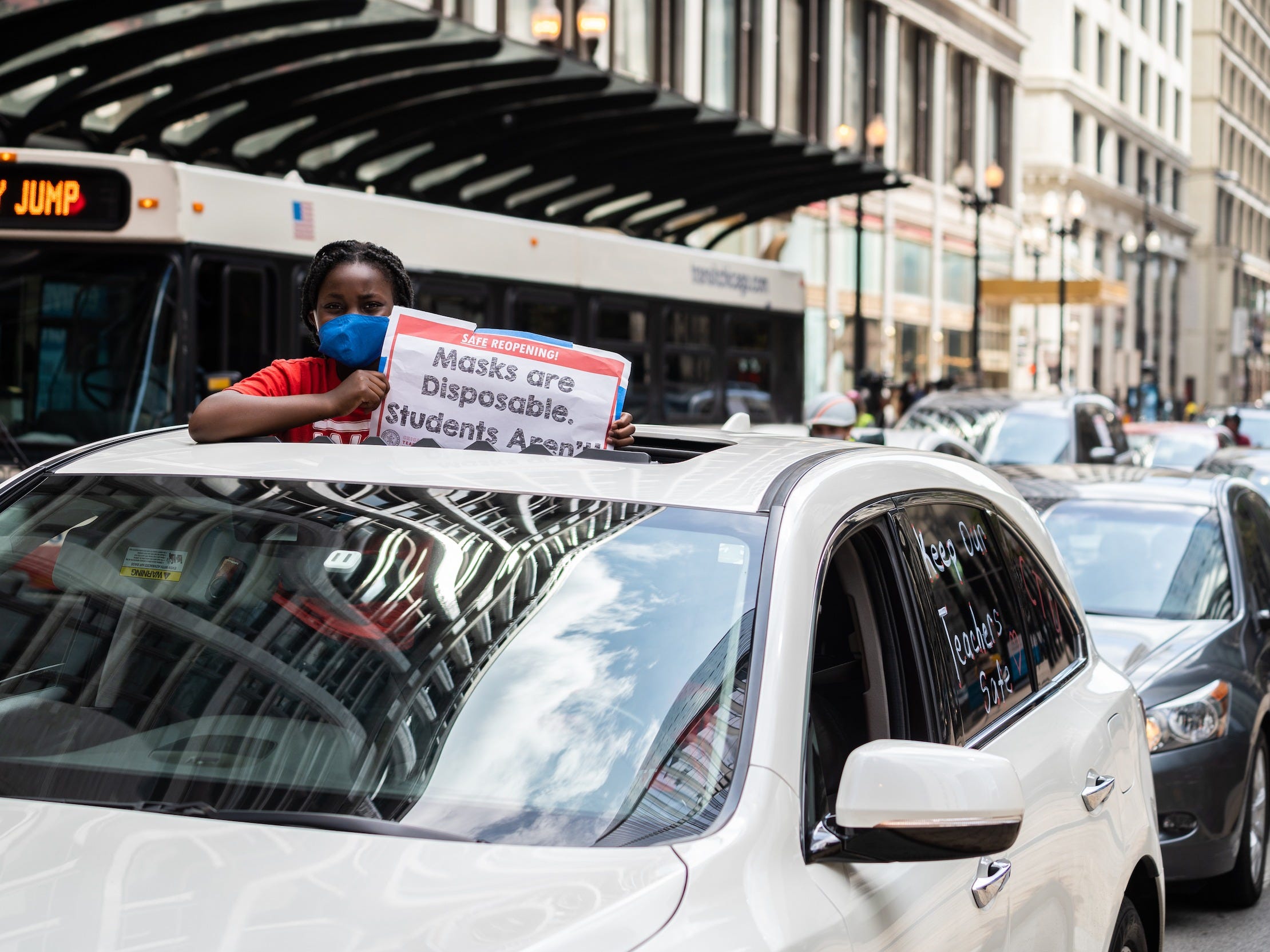 Max Herman/NurPhoto via Getty ImagesA scene from the car caravan.

Days later, Chicago Mayor Lori Lightfoot reversed the city’s plan to move forward with a hybrid reopening – meaning half-in person, half-remote. She said Chicago Public Schools (CPS) will now start remotely on September 8, and daily distanced learning will continue until the start of the second quarter, November 9, at the earliest.

Lightfoot made the decision against the backdrop of a potential strike by the Chicago Teachers Union (CTU) to prevent in-person reopening. The CTU has sparred with the city for much of the last decade, and has won numerous concessions. In fact, it did so shortly after Lightfoot took office just last year, in one of the biggest strikes in recent Chicago history. The flashpoint signals how teaching in America is an ongoing labour story, and that teaching itself, in the coronavirus era, is both the valorized-yet-underpaid “frontline” work that the country has relied on, and that teaching, when done in physical classrooms, can be one of the most dangerous jobs in the country.

The decision by Lightfoot was also a direct rejection of President Trump’s repeated insistence that schools must reopen this fall, despite ominous signs such as a summer-school teacher in Arizona dying of COVID-19. (Illinois has seen a consistent spike in new coronavirus cases in the state.)

Chicago has often been a political punching bag for the president since he took office, painting the city as a hotbed of crime and political dysfunction. Now the city, and its teachers’ union, have punched back, just months before Trump is up for reelection.

Chambers knows from personal experience what’s at stake. In the spring, she had COVID-19 for over 60 days; she’s been documenting her experience on a blog called Covid Teacher.

“In the very beginning, part of the reason I got COVID so badly was I was working so intensely,” she said. She said she spent hours on the phone with families, was helping students find computers, and providing social and emotional support. And then she couldn’t teach for a month – which was hard on her special-ed students.

Even though she’s young and healthy, she said COVID almost killed her. “I’m better now,” Chambers said. “But it still scares me to go back.”

Business Insider spoke to 10 Chicago teachers about the union’s role in the city’s decision to keep schools remote this fall.

Chicago Public Schools and the mayor’s office did not respond to Business Insider’s requests for comment. 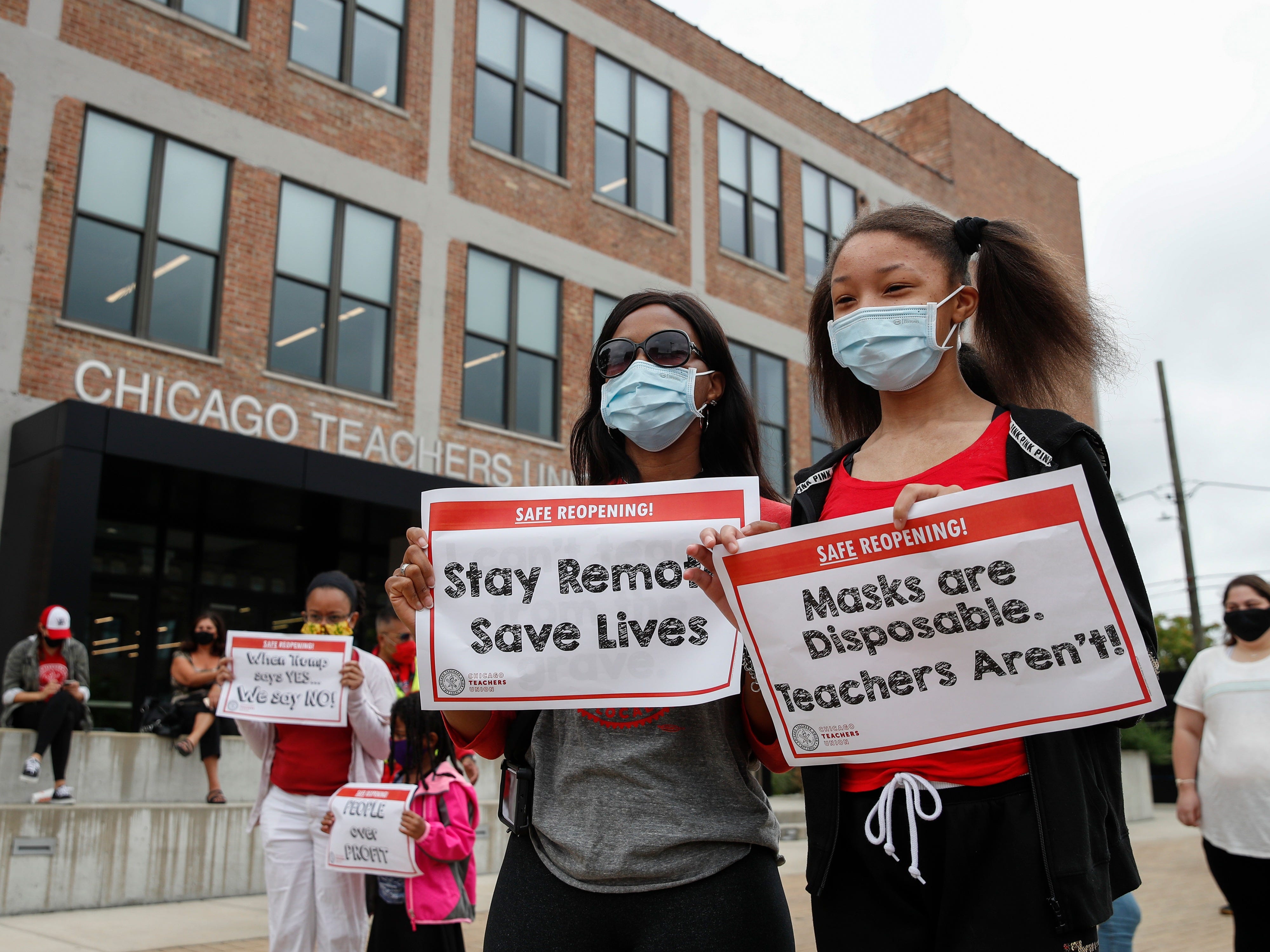 KAMIL KRZACZYNSKI/AFP via Getty ImagesChicago Teachers Union, community groups, and parent organisations all participated in a protest outside of Chicago City Hall to demand remote classes on August 3.

Heading into the fall semester, teachers across the country are still grappling with the abrupt school closures from March, when schools had to move remote with little time for preparation. Teachers told the AP they received little help from school districts on how to educate children remotely, and Common Sense Media found that a third of students don’t have adequate tech for remote learning. Plus, many teachers have lost their lives due to a potentially delayed response to the pandemic.

Every Chicago teacher who talked to Business Insider said the abrupt shift to remote learning was difficult – and, in many cases, laid bare issues of inequity. American teachers, who are mostly women, have faced dwindling resources and declining or stagnant public support for decades.

Public school teachers make nearly 21% less than other jobs requiring a college degree, a gap that was just 2% three decades ago. Meanwhile, public investment in education has fallen since 2008 in 29 states, forcing educators to spend their own money on basic supplies. In 2018, teachers in seven states went on strike demanding higher pay, leading to one of the biggest years for worker protests in recent history.

The CTU has been no exception to the reinvigorated activity by teachers’ unions. The union has sparred with the city for much of the last decade – and has won numerous concessions. In 2012, members of the city’s teacher union went on strike for the first time in 25 years to protest former Mayor Rahm Emanuel’s tying pay to standardised test scores. Teachers won better pay and less emphasis on test scores, and Vox named the 2012 CTU strike the one that “brought teachers unions back from the dead.” Then, shortly after Lightfoot was elected mayor in 2019, unionized teachers went on an 11-day strike calling for decreased class sizes and increasing teacher pay, and many of their requests were granted. It was the city’s third teacher strike in the last eight years, per think tank Illinois Policy.

Like police, teachers have a strong union backing: the union membership rate in the public sector is more than five times as high as the rate for private-sector workers, per the Bureau of Labour Statistics.

Dan DiSalvo of the Manhattan Institute told Business Insider that unions are still strong in the private sector, unlike the private sector, which is just 10% unionized today versus about 25% two decades ago. Both public and private unions have been key allies – and donors – to the Democratic party. Brookings senior fellow Douglas Harris finds that 60% of union members vote Democrat, and labour unions as a whole contribute $US60 million annually to Democratic candidates.

When asked by reporters if union pressure contributed to the new plan, Lightfoot said: “The answer is, ‘no.’ As we have now repeatedly said about every decision that we’ve made in the context of this pandemic, we have to be guided by the science. Period.”

Rebecca Coven, a 10th grade English and social studies teacher at Sullivan High School who spent the summer working as an organising intern for CTU, said she believes that pressure from the union forced Lightfoot to ultimately opt for remote learning in the fall. CTU had been at the bargaining table with CPS this summer over the return-to-work issue, she said, and “union leadership made it very clear that they were ready to strike.”

Chambers, Coven, and Mary Margaret Orr, a Chicago kindergarten teacher who has been teaching for over 25 years, all said negotiations between the union and CPS will continue after the announcement.

The parents of Chicago seem to side with its teachers. In a Wednesday statement, CPS noted that it had received more than 87,000 survey responses that showed tens of thousands of parents did not plan to send their children back to in-person classrooms next month. Roughly 41% of elementary school parents and 38% of high school parents planned to opt out of the original hybrid model. Meanwhile, about 80% of Black and Latinx parents planned to keep their kids home, too.

Teachers are scared and glad their union backed them up 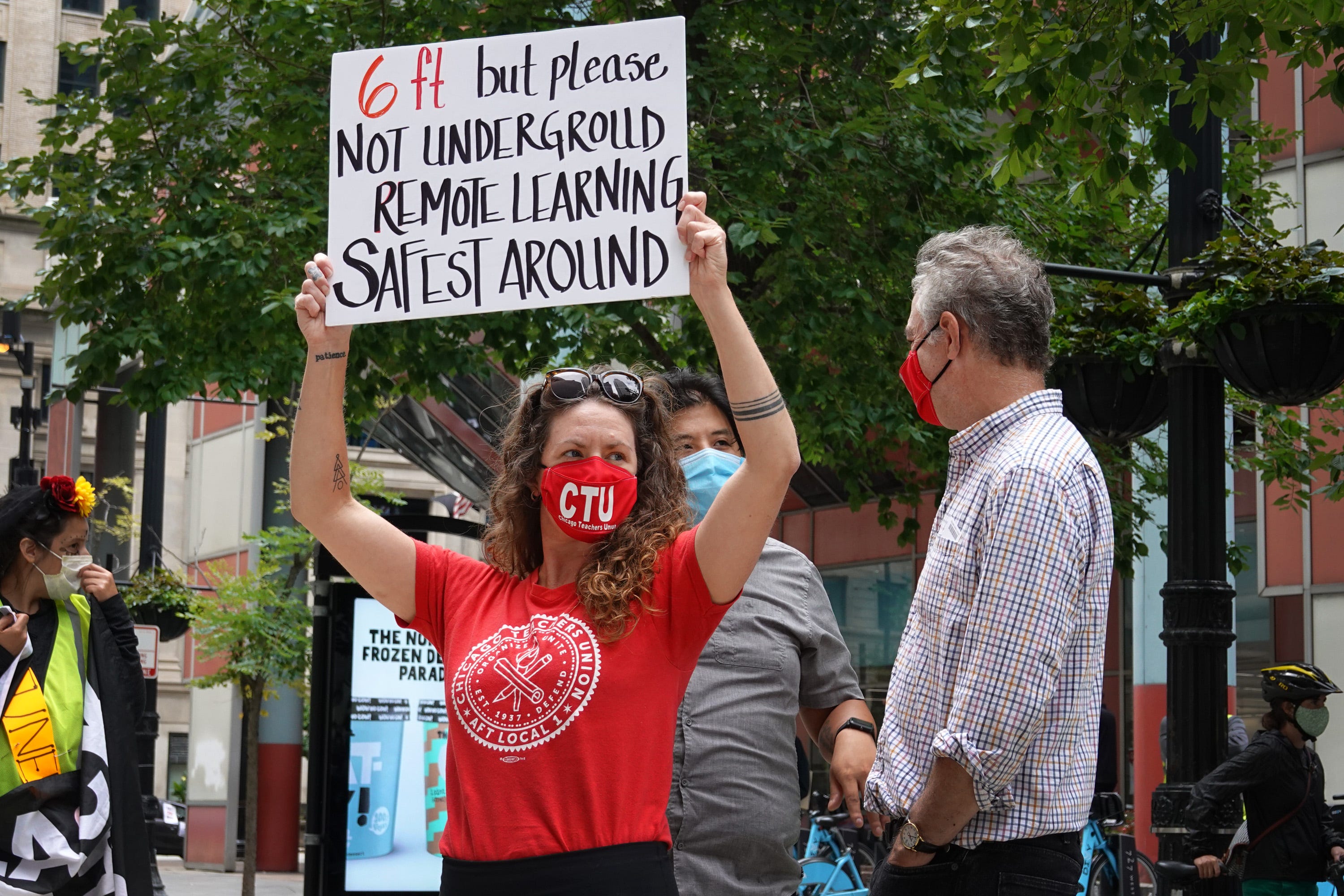 Scott Olson/Getty ImagesChicago Teachers Union, community groups, and parent organisations all participated in a protest outside of Chicago City Hall to demand remote classes on August 3.

Mayor Lightfoot told reporters the decision to start remotely “makes sense for a district of CPS’ size and diversity,” but some of the teachers who spoke to Business Insider expressed frustration that a strike had to be on the cards to bring about this outcome.

“I’m relieved, but a little bit frustrated,” Coven told Business Insider. “This isn’t a fight we should have had to fight in the first place,” she said, adding that teachers could have spent the past month planning and preparing for a challenging remote semester instead of “convincing CPS our lives and our students’ lives matter.”

Coven also said that, while organising with CTU this summer, she would spend most of her day listening to teachers who were “in fear of going back – they didn’t want to harm their students’ families.”

Some other teachers said they haven’t heard much from the school district throughout the summer. Marlena Gustafson, a teacher in the Little Village neighbourhood, said “It would be nice if we heard things ahead of time instead of waiting to hear it on the news when everyone else does.”

CTU President Jesse Sharkey said the union was “relieved that safety will be prioritised as the virus continues to spread and the school year will start remotely,” but also criticised how “CPS wasted weeks delaying this decision, when that time could have been spent planning how to improve remote learning practices.” He also called on the mayor’s CPS executives and board of education to make remote learning better than last spring, when “poor CPS policy decisions and serious digital divide issues for thousands of students undermined educators’ efforts to educate our students remotely.”

Ultimately, the remote decision was the only responsible one, most of the teachers said.

“All of the data” points to staying home, CPS 4th grade maths and science teacher Verónica Martinez-Gonzalez told Business Insider. “I know what my classroom looks like,” she said, “and I know that it would be impossible to implement the necessary changes to make going back to school safe.”

Another CPS teacher, David Stieber, said the idea of reopening schools in person “in any form, would not keep our students safe. Remote learning, though not ideal, is the only way to do that,” he said.

“I think this pandemic has revealed how as a society we rely on schools for social services beyond education,” Coven said. One such realisation is how much America relies on schools for things like therapy, social work, and meals. “We need to think about how we can get those services to our students and their families.”