26 of the most daring outfits Cher has ever worn 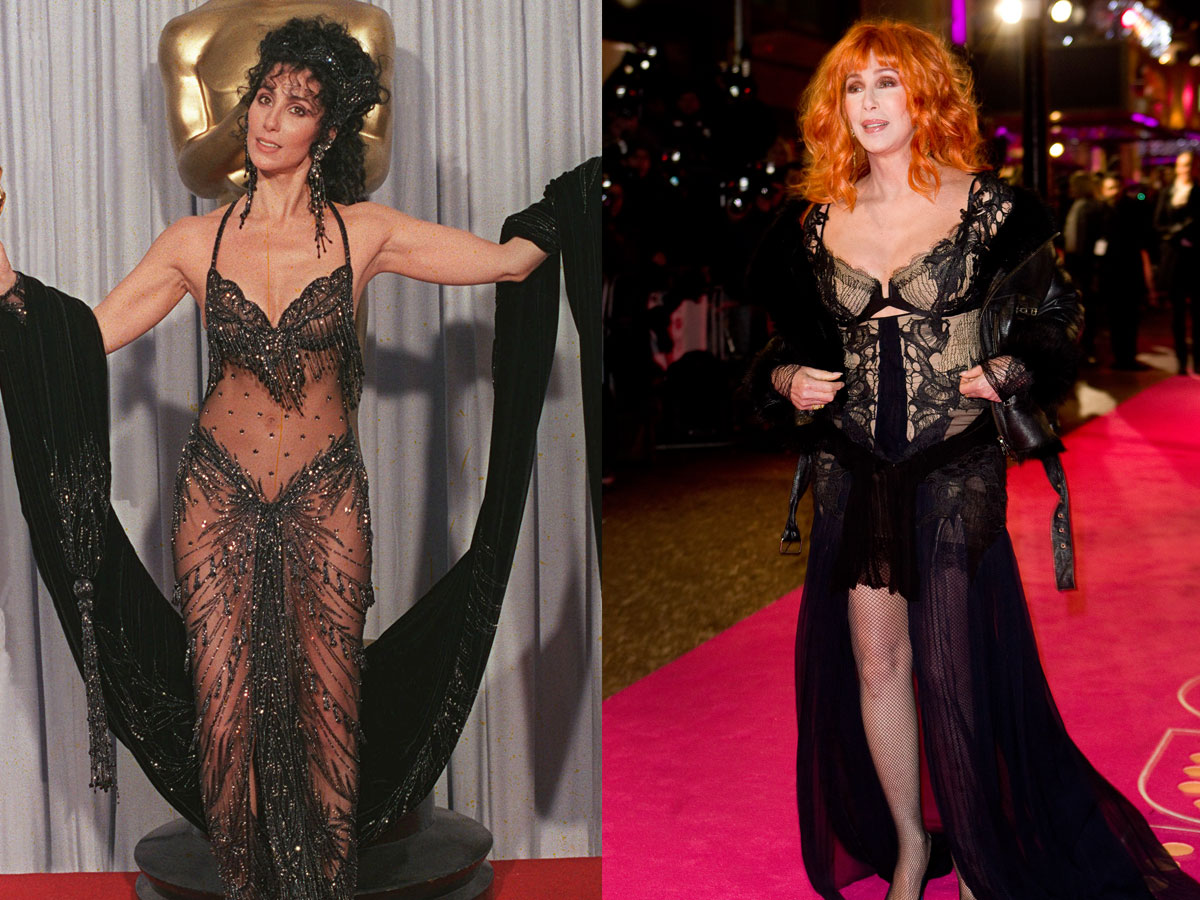 Whether you became a fan of Cher in the 1960s or in the 2000s, you know she’s always been an incredible performer with bold style.

From her days starring on “The Sonny and Cher Comedy Hour” to appearing in movies like “Mamma Mia! Here We Go Again,” the iconic performer has turned heads for decades with show-stopping fashion choices.

Here are some of the most daring and beautiful outfits that Cher has ever worn.

Cher and Sonny wore psychedelic prints when they posed for photos in the early 1960s. 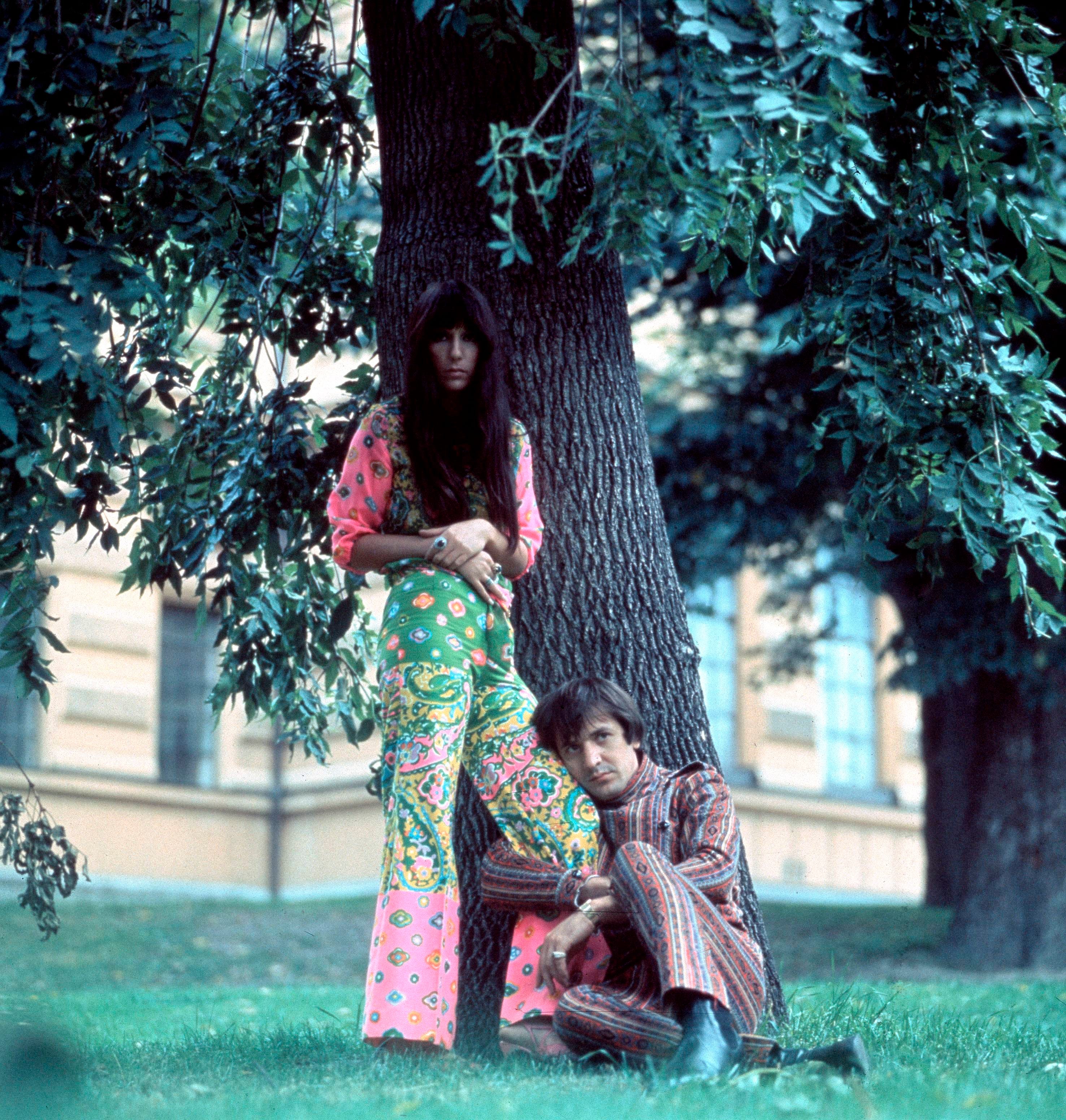 Jan Olofsson/Redferns/Getty ImagesCher and Sonny Bono posing for photos in the 1960s.

Sonny and Cher continued to rock bold colours, patterns, and fabrics throughout the 1960s. Marcello Salustri/Mondadori via Getty ImagesSonny Bono and Cher photographed in Italy in 1961.

Cher and Sonny wore matching fringe outfits for a press event in 1965. Eric Harlow/Mirrorpix/Getty ImagesCher and Sonny at the London Hilton Hotel in 1965.

Cher rocked a canary-yellow outfit at a sound check for her performance at the Hollywood Bowl in 1966. 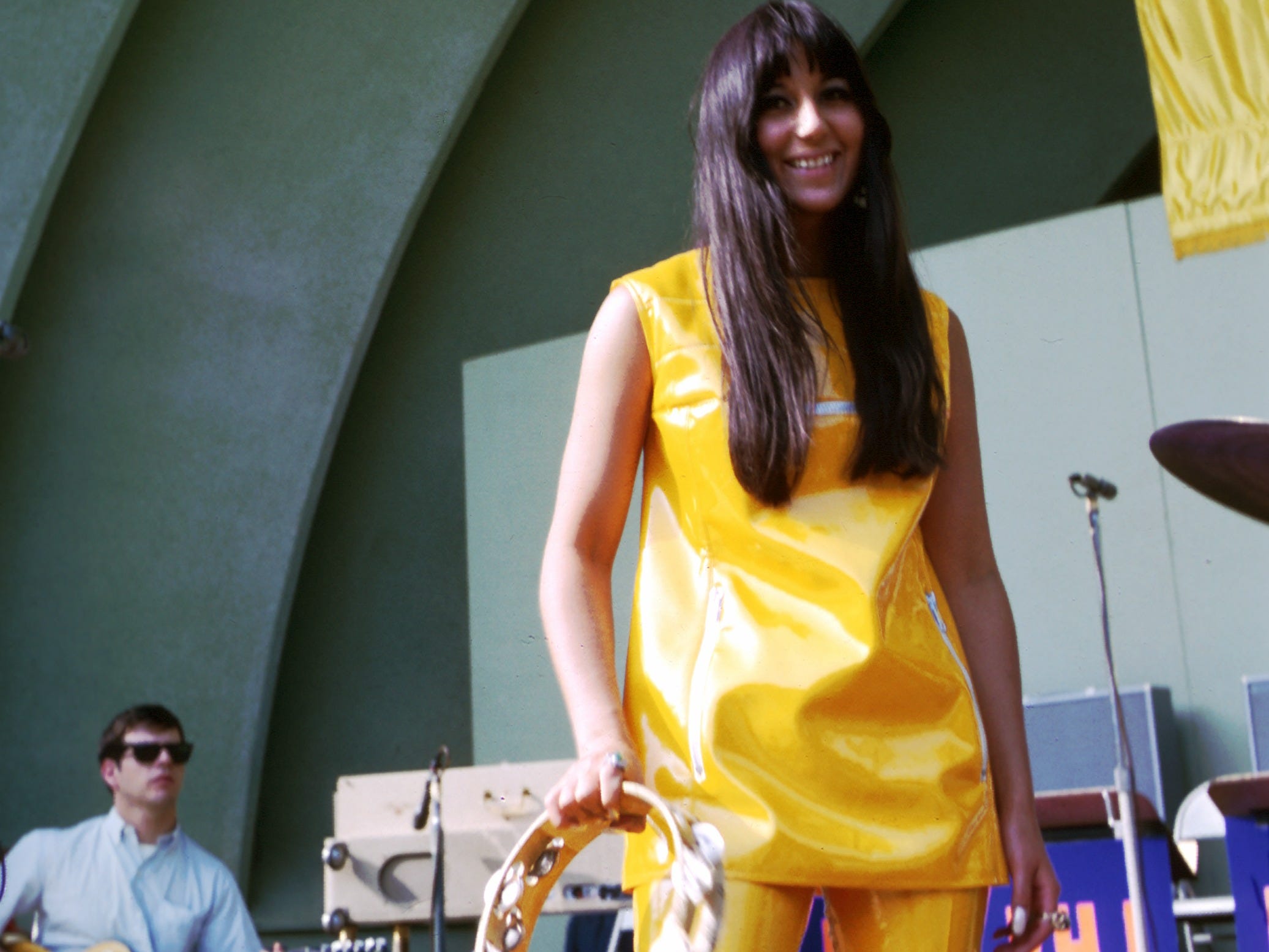 She wore a red, stomach-baring dress for a performance in 1972. 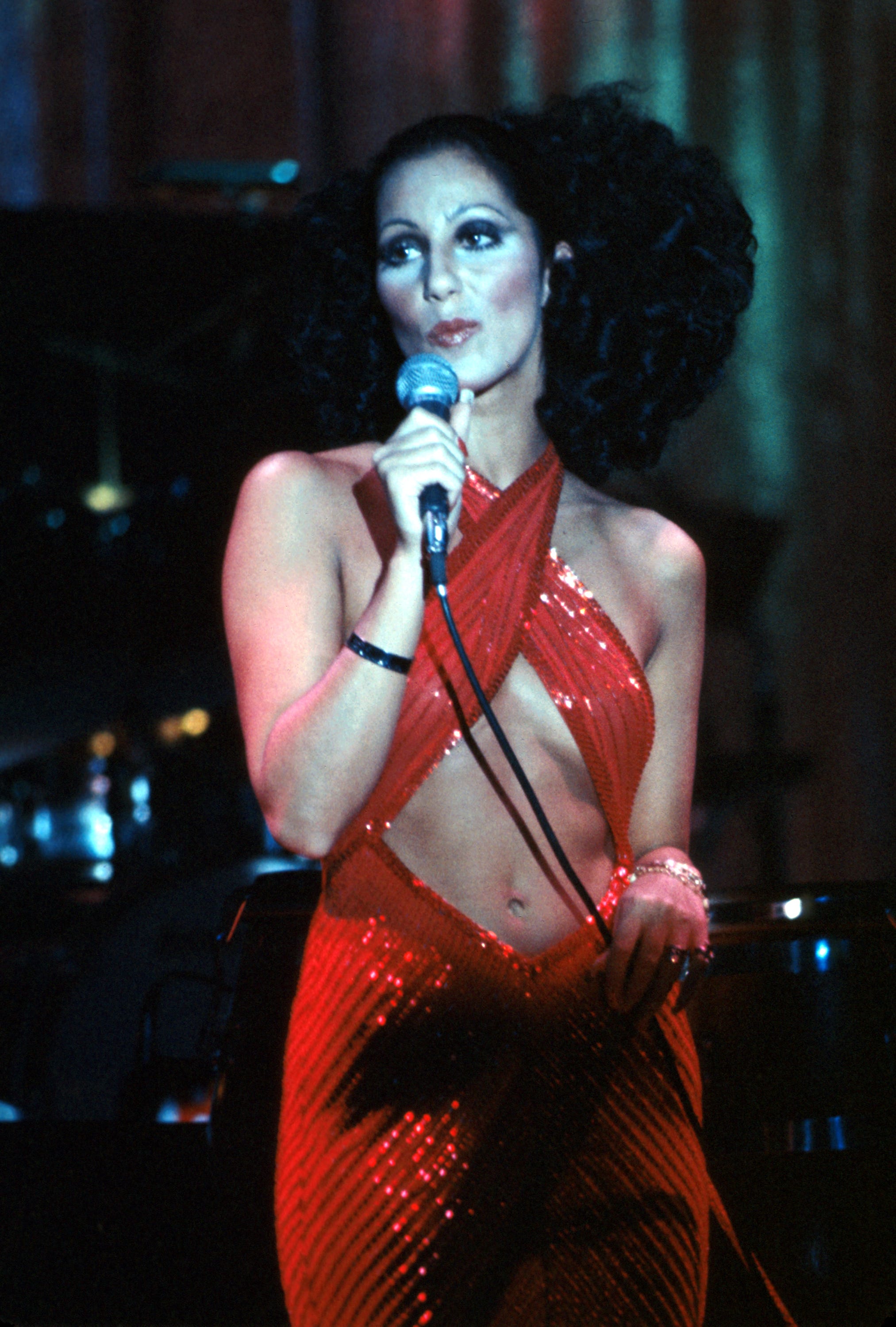 Michael Ochs Archives/Getty ImagesCher went for a daring, sparkly look for a live performance in 1972.

Cher went for a gold, two-piece ensemble for the Oscars in 1973. 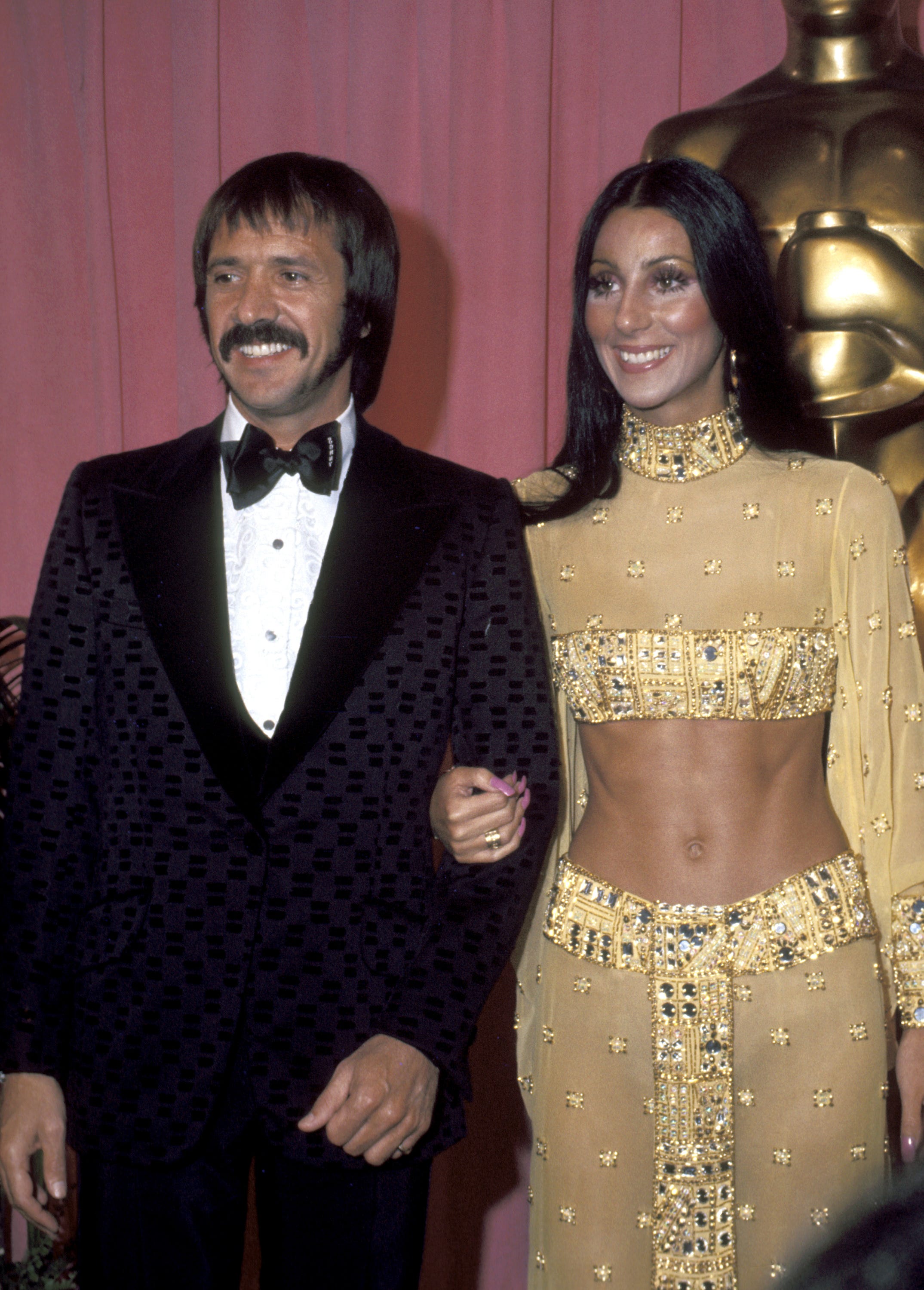 Ron Galella/Ron Galella Collection via Getty ImagesSonny Bono and Cher on the red carpet for the 45th Academy Awards.

She showed off a more delicate look at the Grammys in 1974. 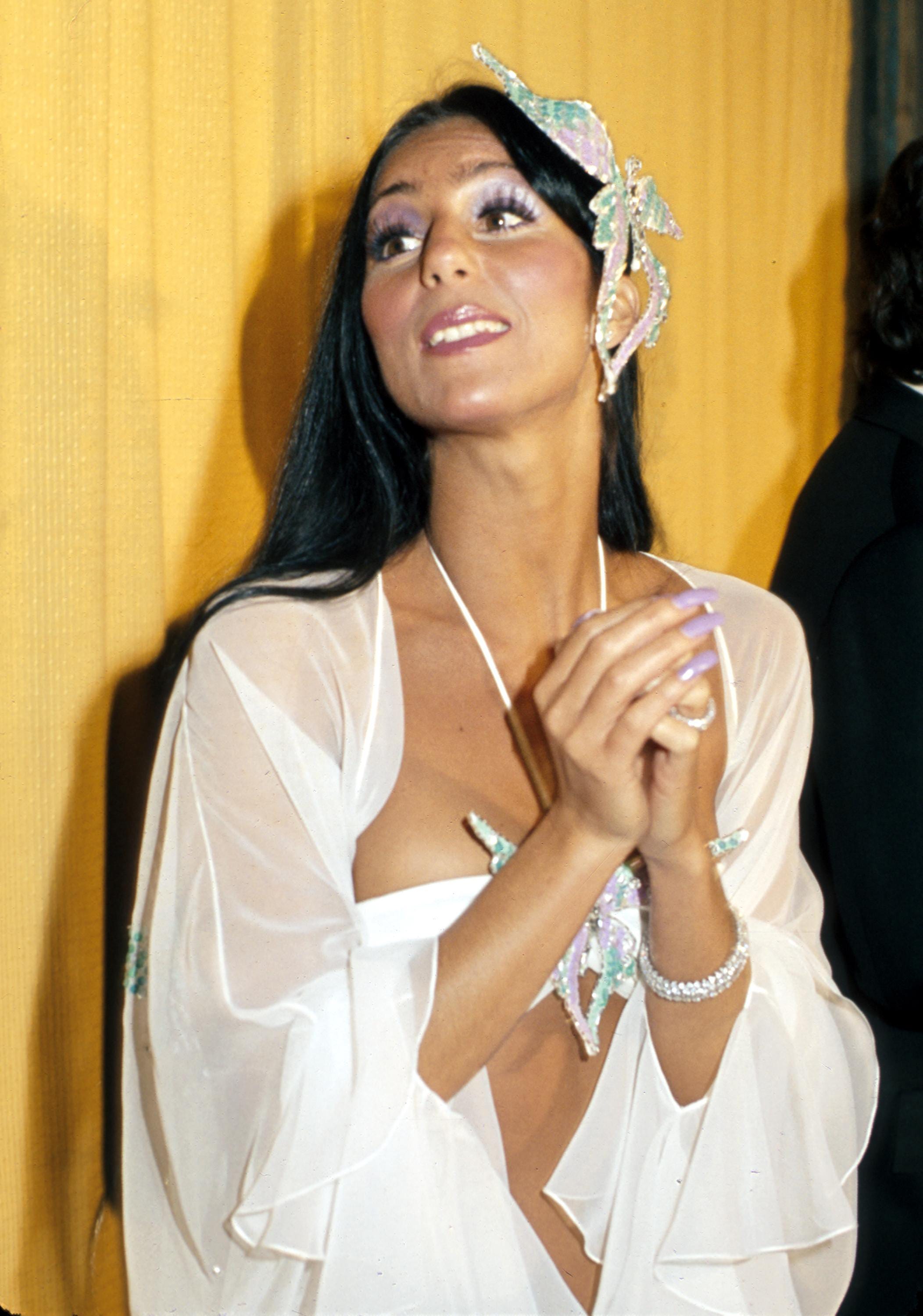 Michael Ochs Archives/Getty ImagesCher at the Grammy Awards in 1974.

The bra top was accessorized with an iridescent butterfly that matched the one on her ruffled skirt and the clip in her hair. She pulled her Grammys look together with purple nails and makeup.

Cher donned a see-through, bedazzled outfit for the 1974 Met Gala. 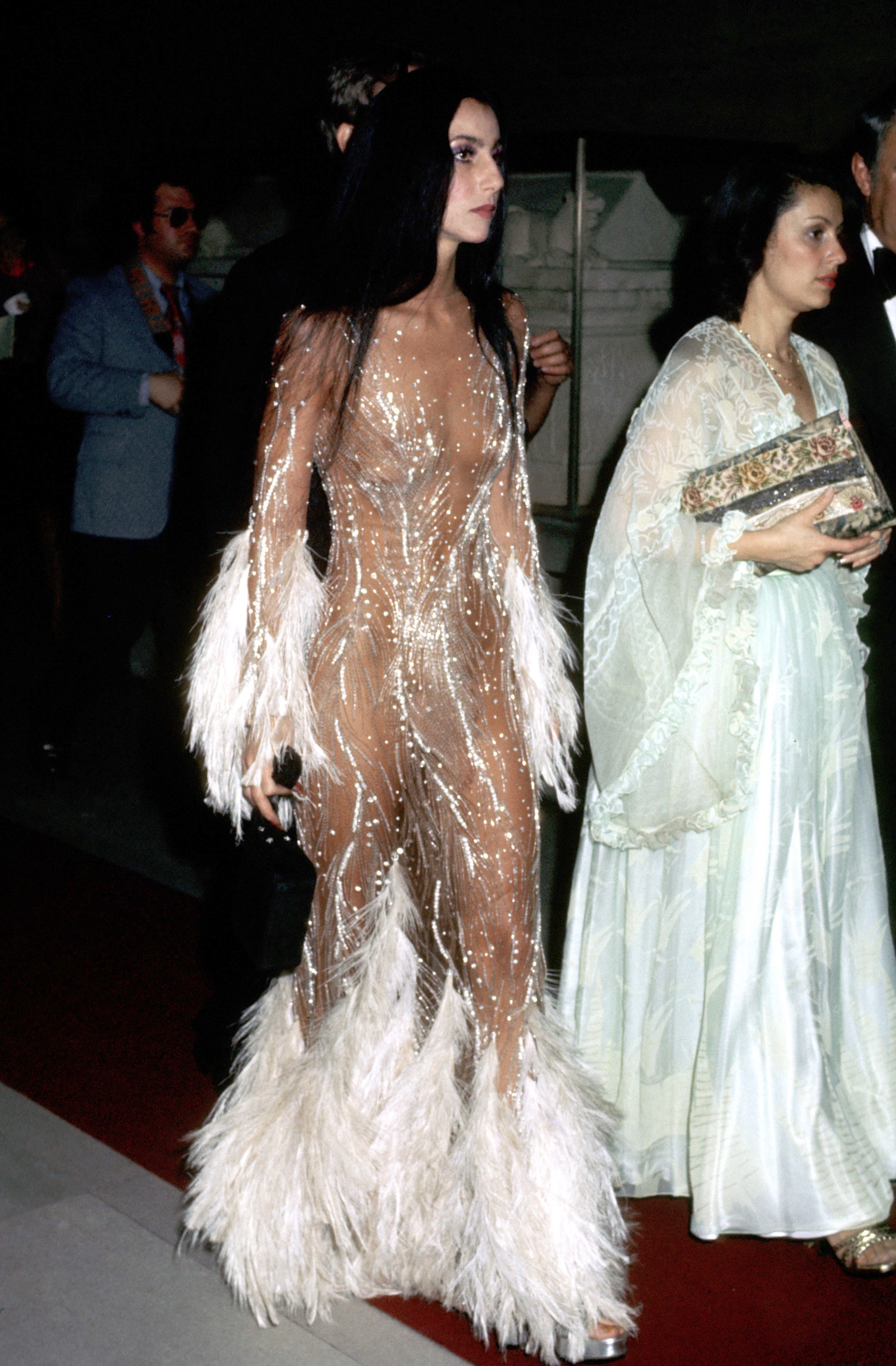 Ron Galella/Ron Galella Collection via Getty ImagesCher wore a gown by Bob Mackie to the gala in 1974.

At the Romantic and Glamorous Hollywood Design Met Gala, Cher went for a sheer look complete with sparkles and feathers.

Cher also rocked daring looks on the screen, like this leopard ensemble from 1979. APCher in ‘Cher … and Other Fantasies.’

In the TV movie “Cher … and Other Fantasies,” she performed “More Than You Know” in a leopard-print costume complete with vine-like hair.

She kept her look simple when she accepted a Golden Globe in 1984 for her role in “Silkwood.” 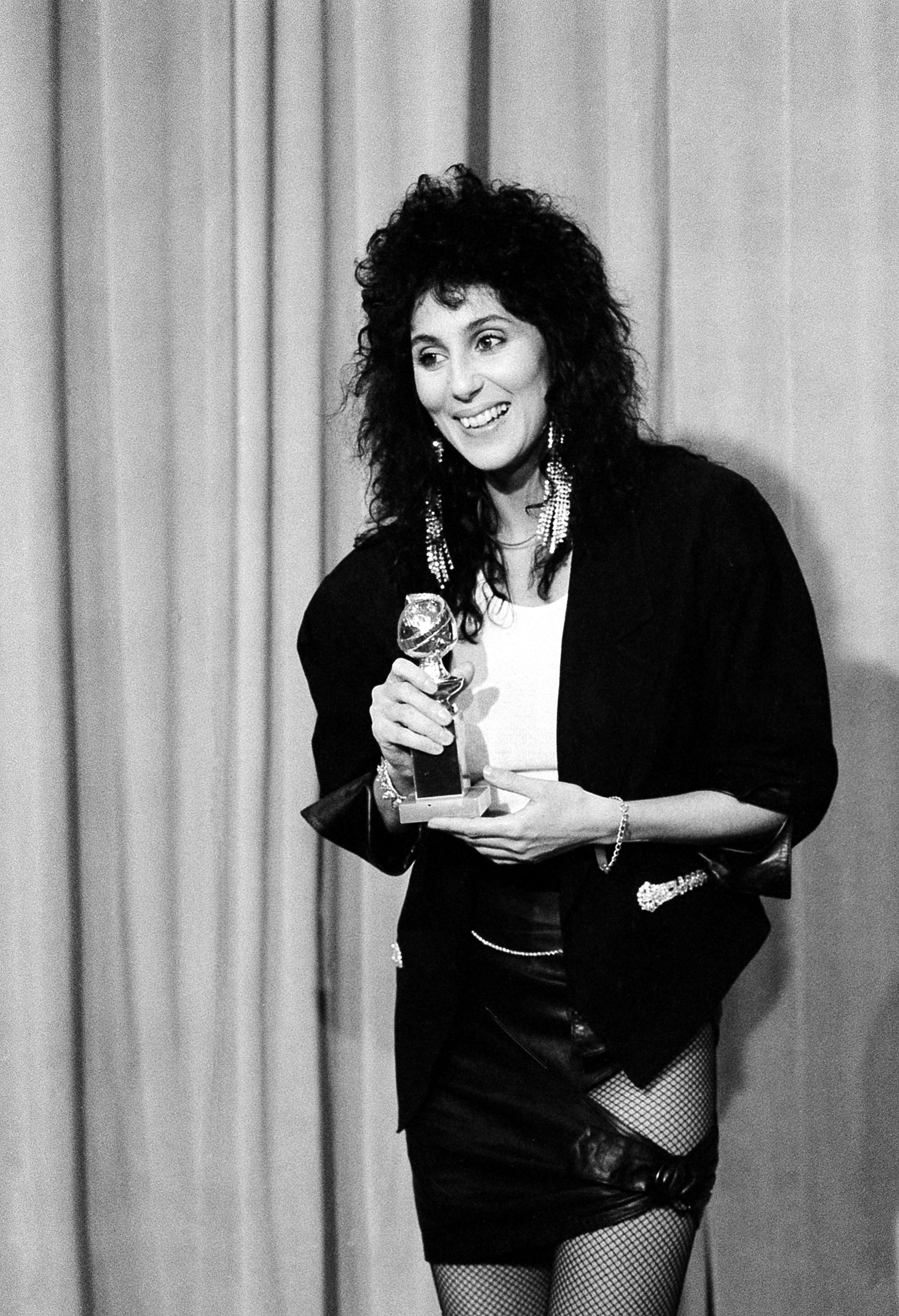 APCher won the Golden Globe for best supporting actress in 1984.

Cher went for an iconic 1980s look for the Golden Globes complete with fishnets, a ripped skirt, and a puffy jacket.

The famed actress and singer turned heads at the 1986 Academy Awards. 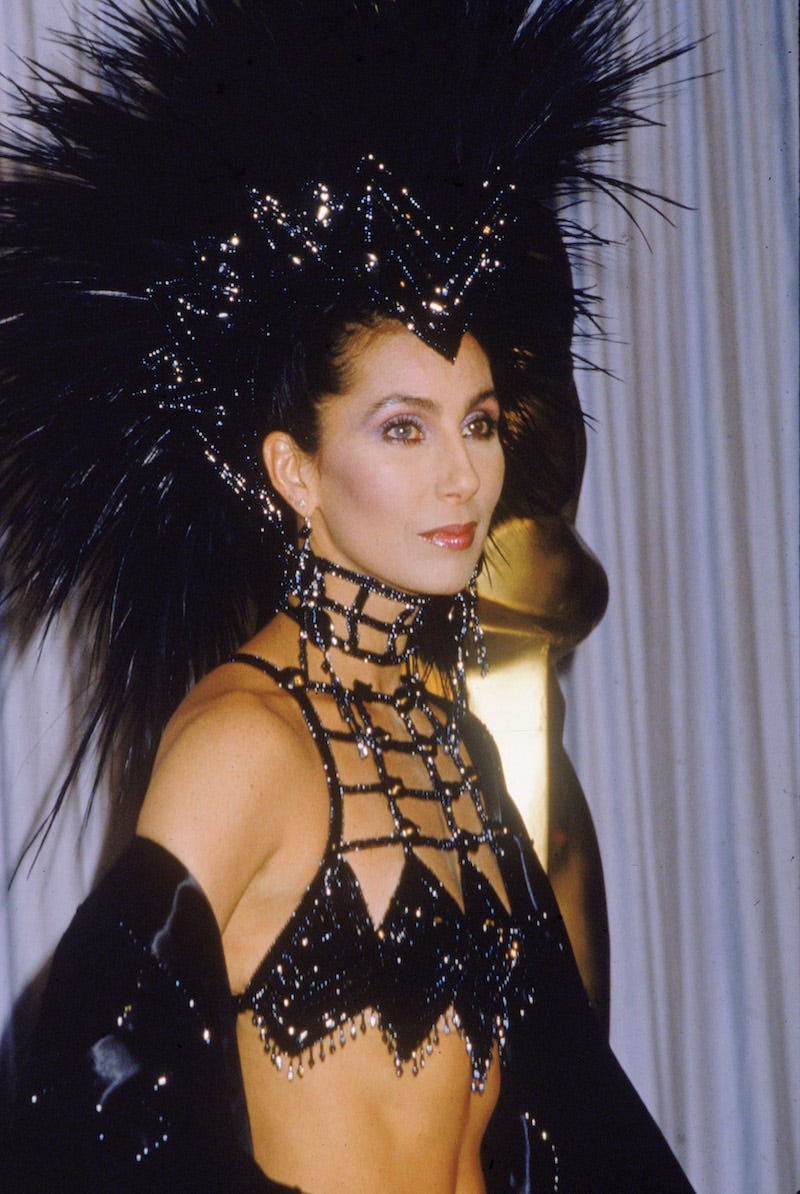 The iconic two-piece look designed by Bob Mackie featured an elaborate black headpiece, a geometric top and skirt, and a long, black shawl.

Cher rocked another see-through, glittery ensemble at the MTV Video Music Awards in 1987. 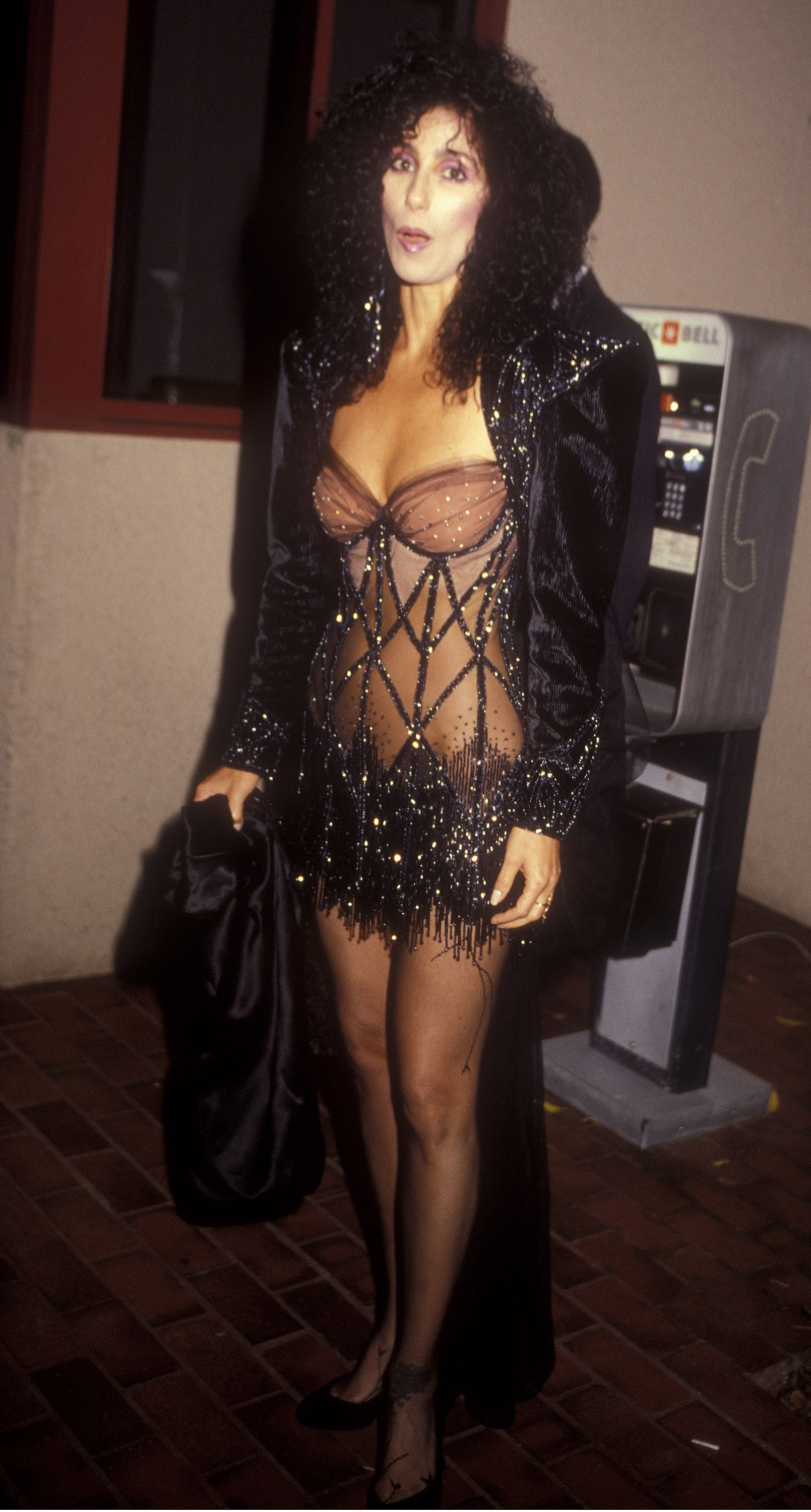 The dress had a short, flapper-inspired skirt with a bow on the back. Cher completed the look with an oversized jacket and big, curly hair.

She wore a sheer, sequined gown to the 1987 Oscars. 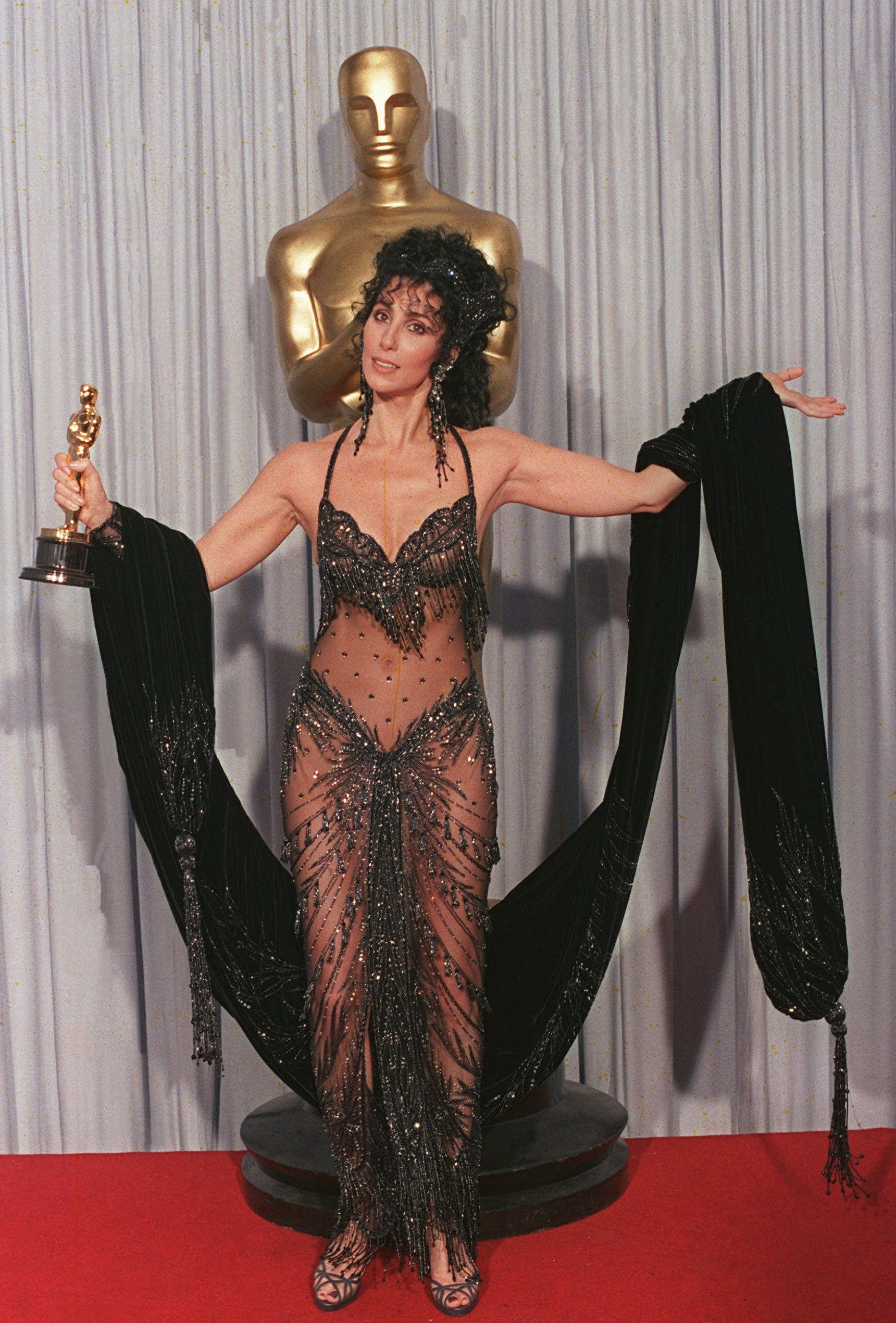 APCher turned heads in a sheer gown at the Oscars.

Cher took home the award for best actress for her role as Loretta Castorini in “Moonstruck.” Her Bob Mackie-designed halter-strapped gown was accessorized with a black, velvet shawl.

Cher wore an Egyptian-inspired gown to the unveiling of her signature scent, Uninhibited, in 1988. 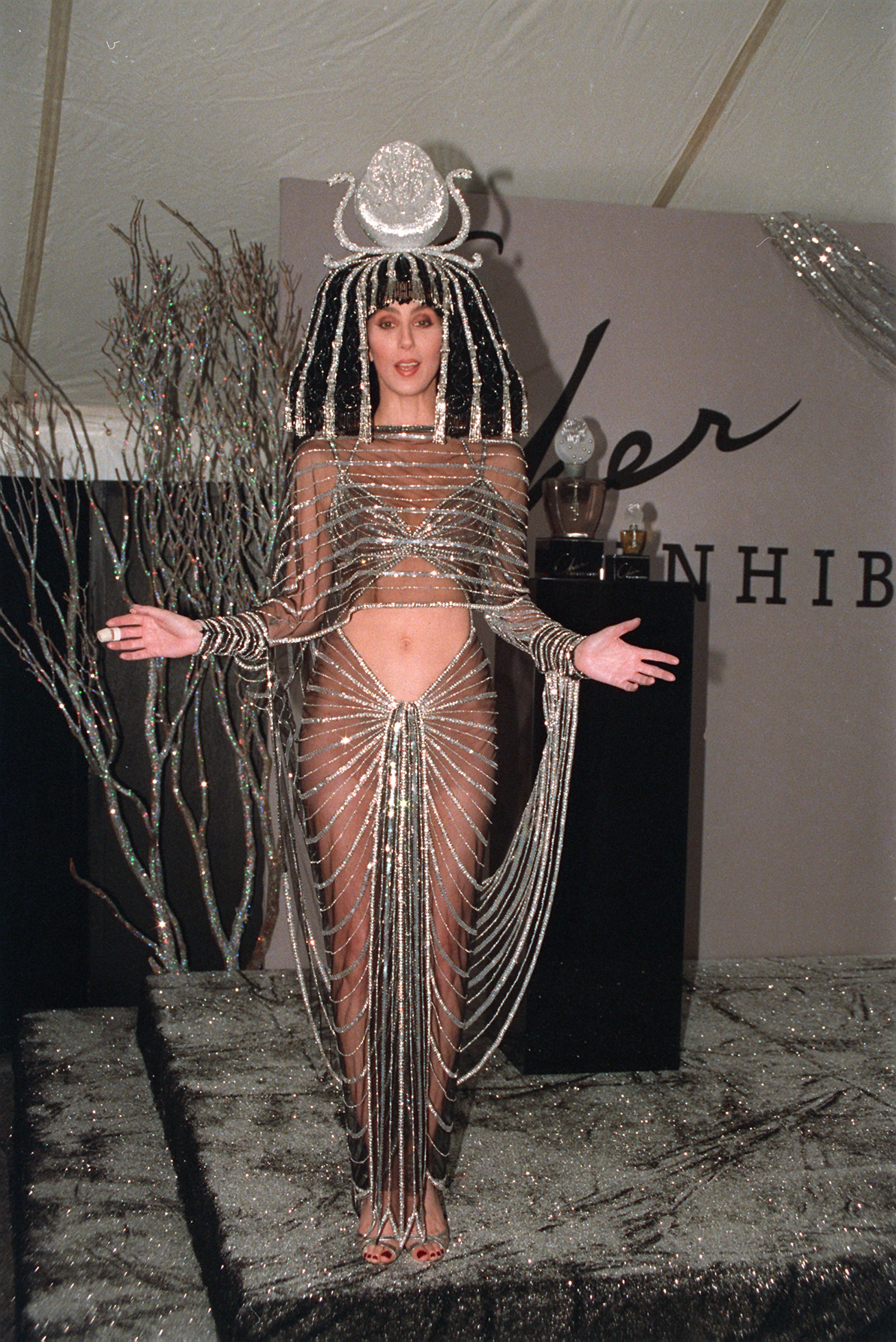 APCher debuted this elaborate look at the launch event for her perfume line.

A decade after her Oscar win, Cher appeared at the 1998 Academy Awards in an elaborate nude gown. 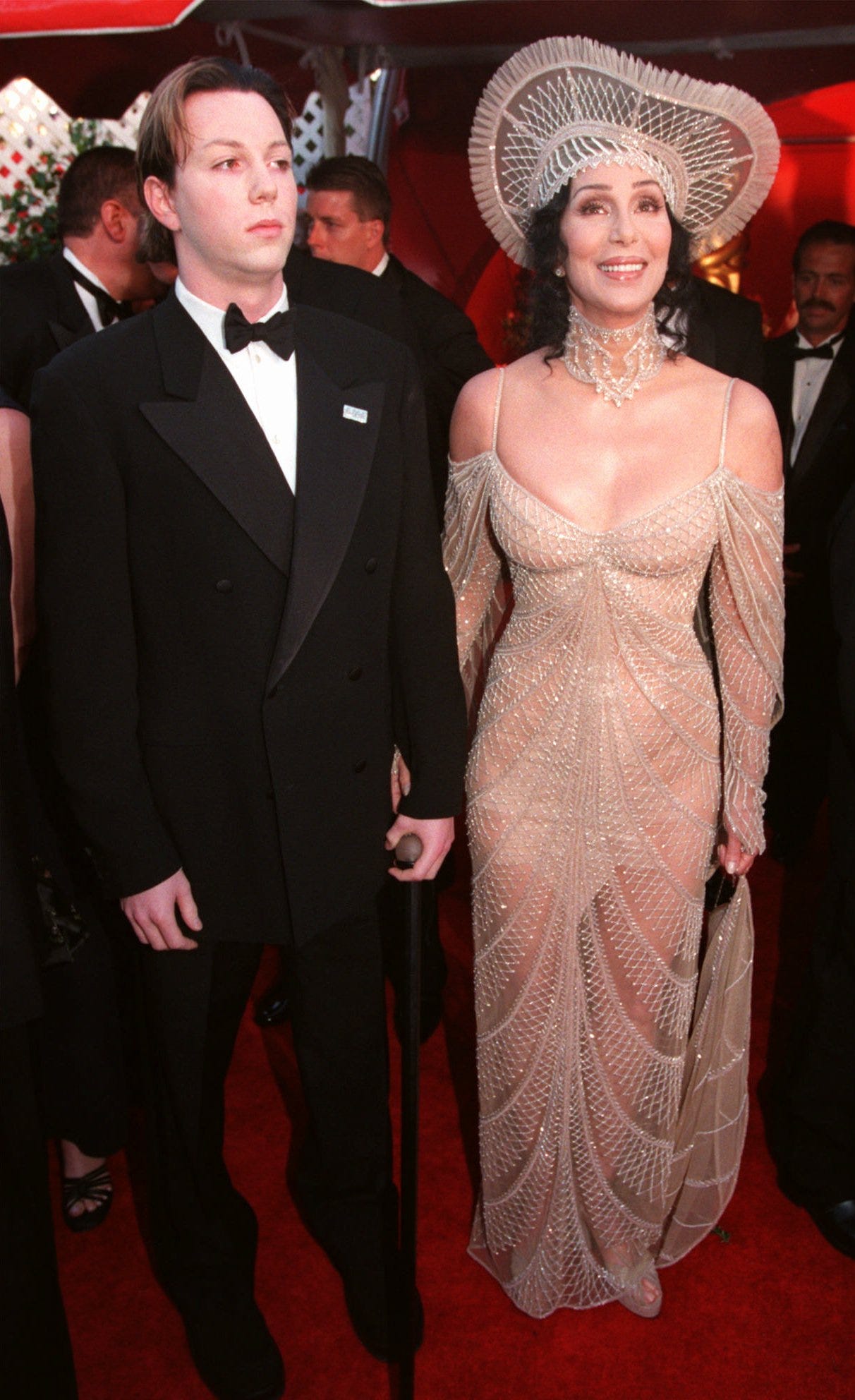 APElijah Blue Allman and Cher in 1998.

Cher walked the red carpet with her son, Elijah Blue Allman, and her look was completed with a matching choker necklace and sparkly hat.

The singer went a little more goth with her dress choice at the 2008 Grammys. 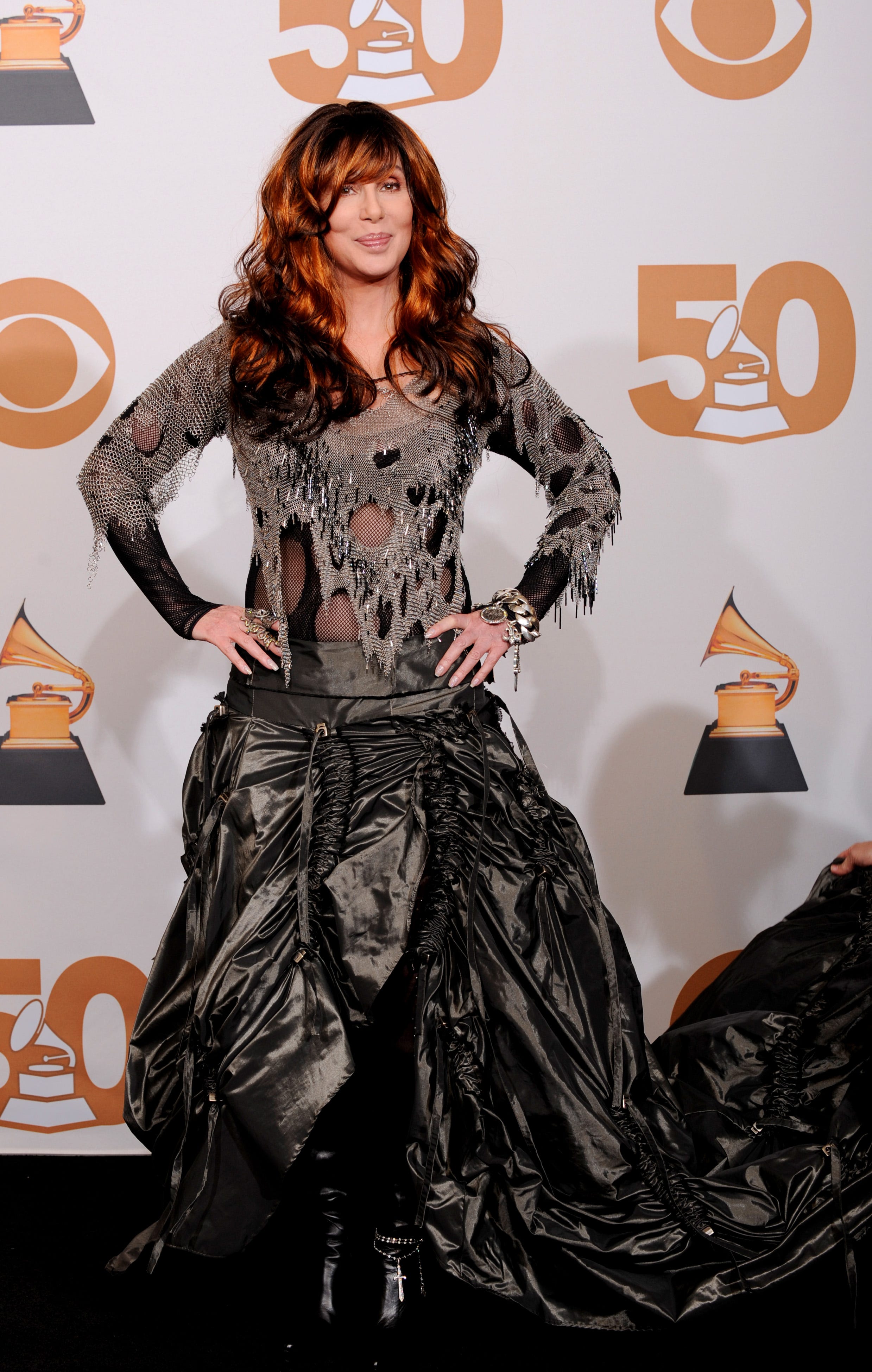 APCher wore a tattered, black gown to the Grammys in 2008.

She stunned during a 2004 performance in Hungary. APShe performed in a glittering outfit during her tour in 2004.

She wore a minidress to the LA premiere of “Burlesque” in 2010. 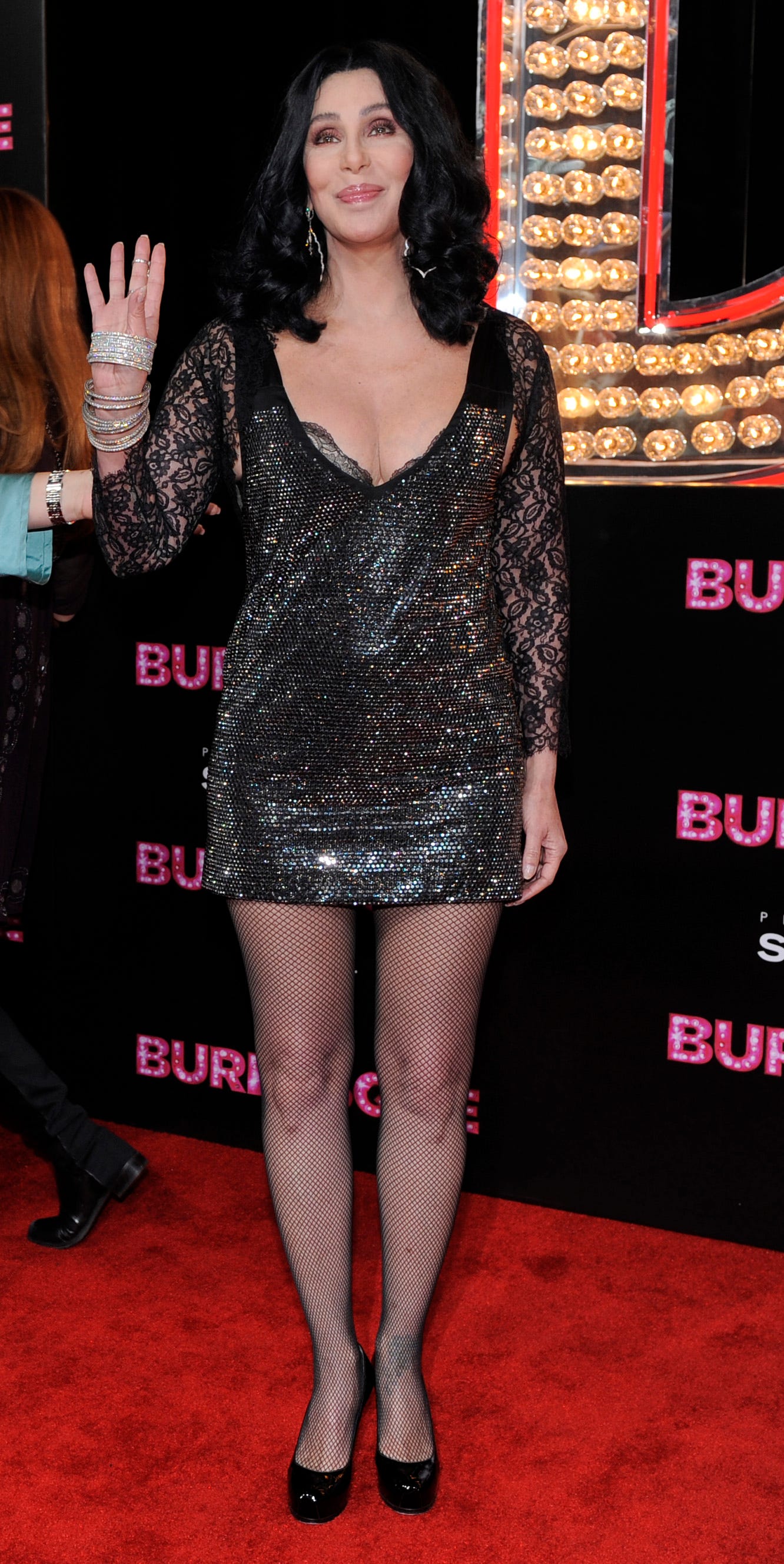 She turned heads in a short dress paired with a lace shrug and fishnet tights.

She continued her press tour for “Burlesque,” rocking a lacey gown and orange hair in London. 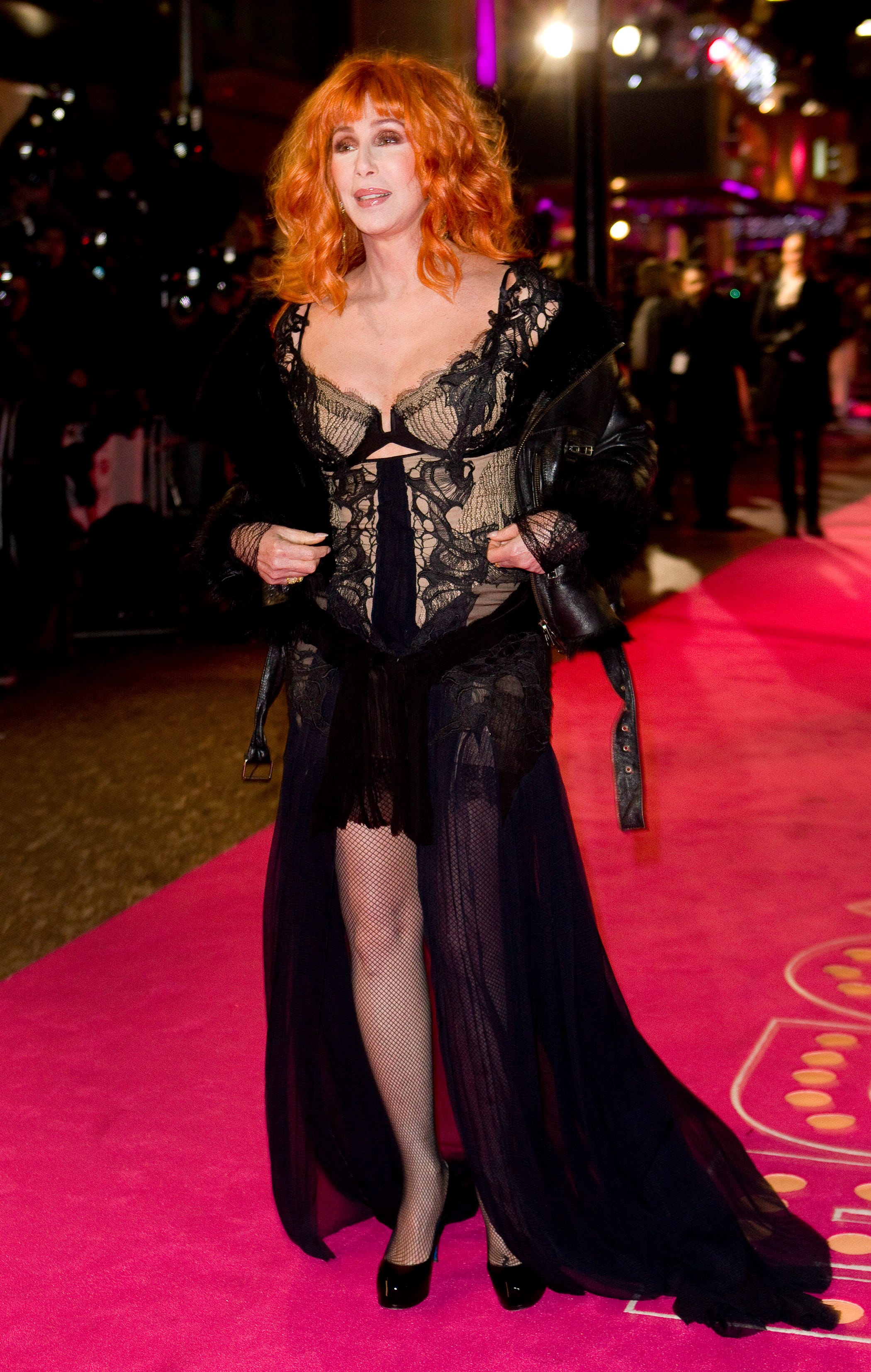 APCher at the London premiere of ‘Burlesque.’

Cher rocked bright orange hair and a lingerie-inspired gown to the London premiere.

She wore a short bandage dress for her hand and footprint ceremony at the Grauman’s Chinese Theatre in 2010. 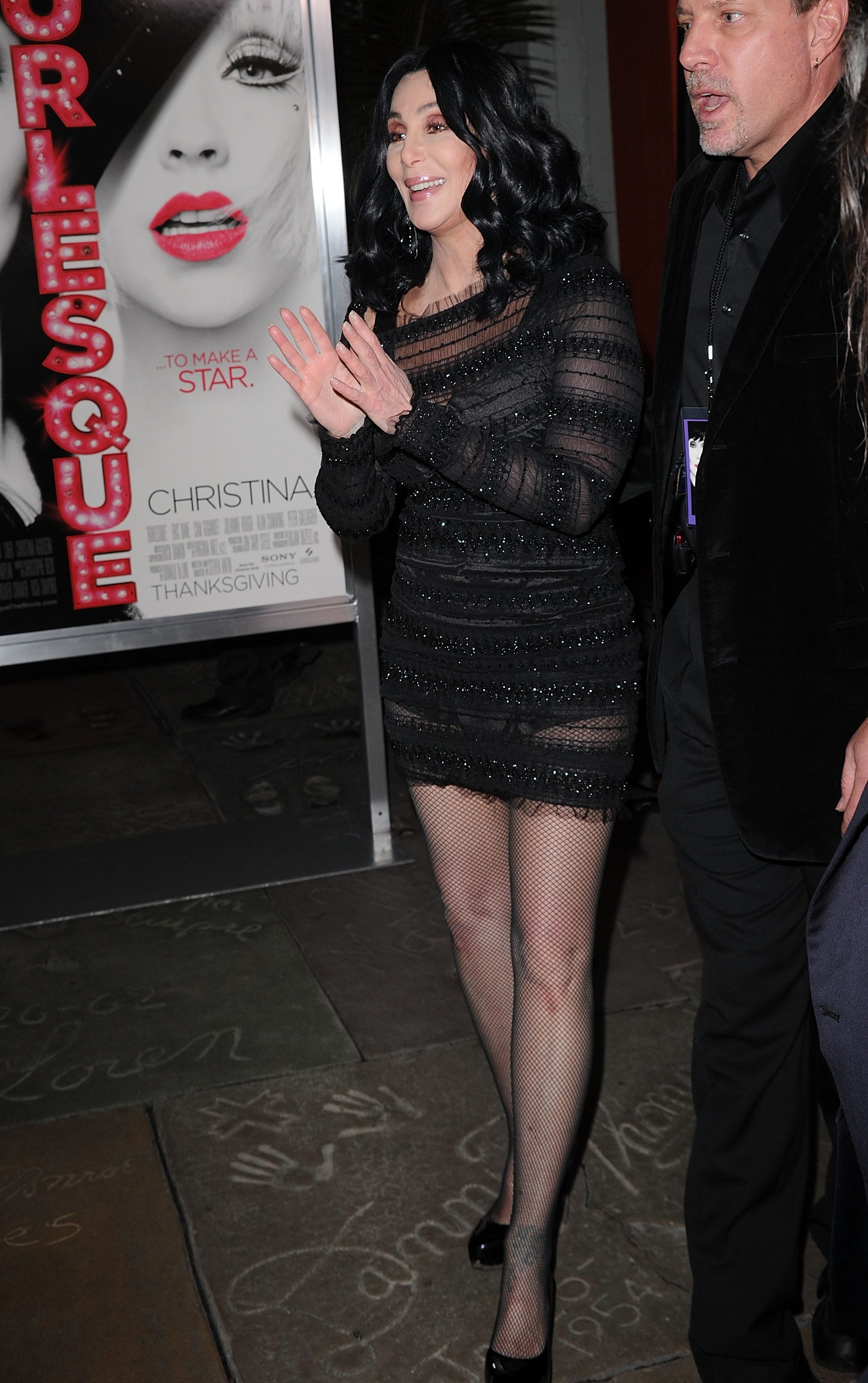 Jason Merritt/Getty ImagesCher was honoured at the Grauman’s Chinese Theatre in 2010.

She stayed true to her style, rocking sparkles, fishnets, and curly locks. 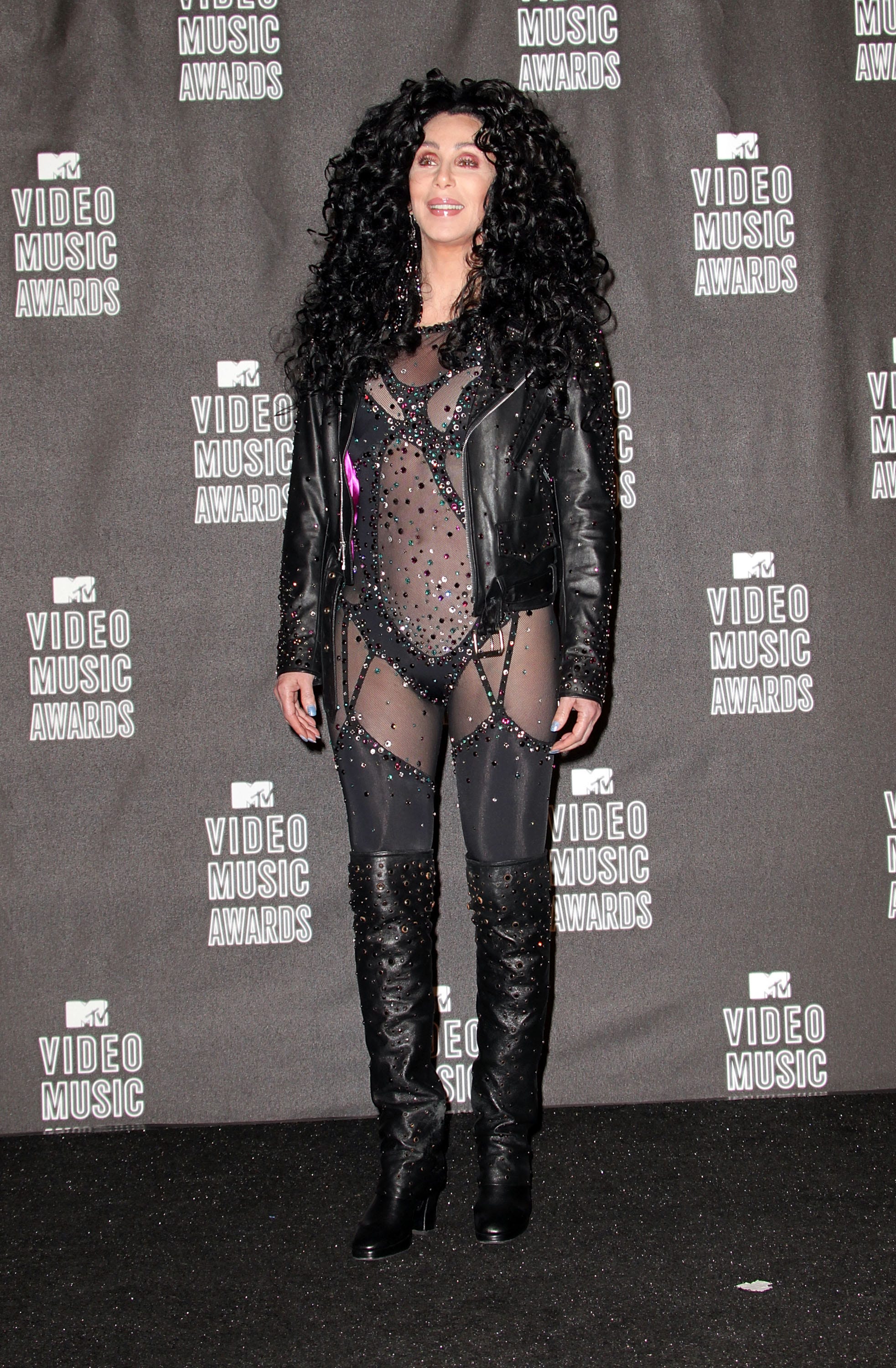 Frederick M. Brown/Getty ImagesCher recreated the iconic look at the MTV VMAs in 2010.

The original video was only aired at night because her outfit was deemed too controversial, but fans loved the recreation complete with huge hair, thigh-high boots, and a leather jacket. 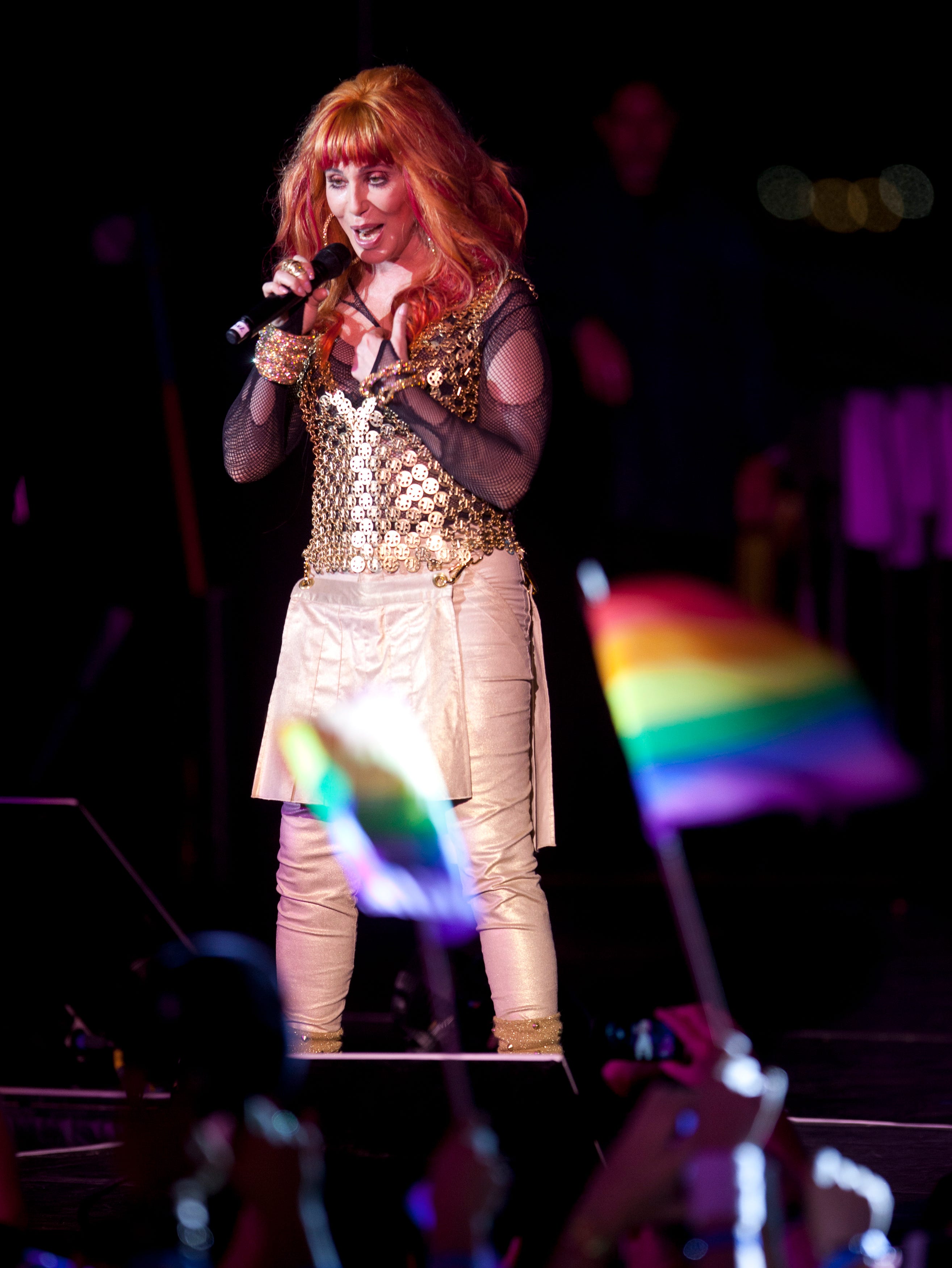 APCher performed at the 2012 ‘Dance on the Pier’ event for NYC Pride.

She showed off red tresses again and wore gold body armour over tattered, black mesh for the performance.

Cher’s bold style was as present as ever during her Dressed to Kill Tour. 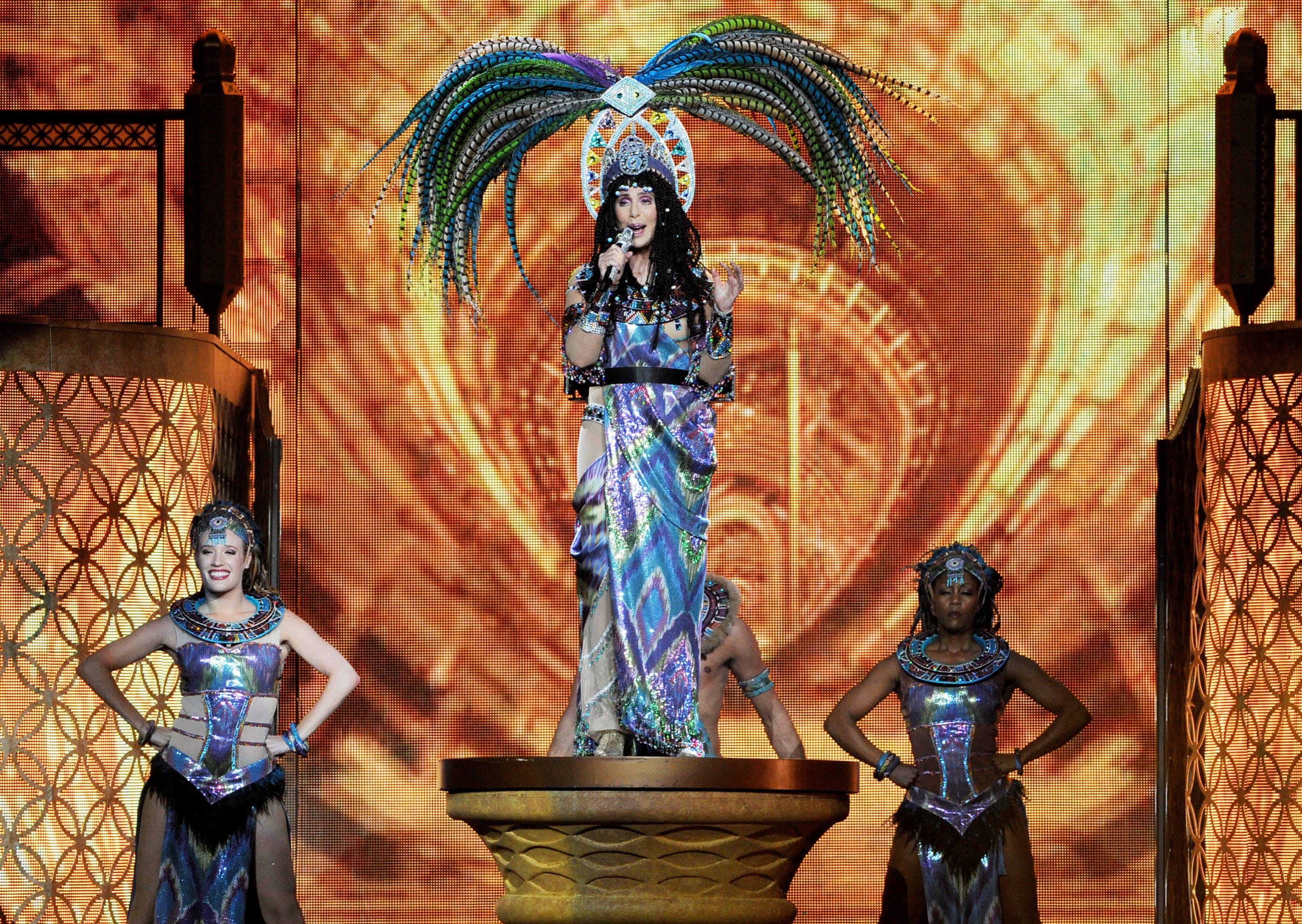 Kevin Winter/Getty ImagesCher performing on her Dressed to Kill Tour.

She pulled off another dramatic headpiece and rocked a bright, patterned gown.

A day after her 71st birthday, Cher took the stage in a daring, silver ensemble at the 2017 Billboard Music Awards. She rocked a barely-there silver outfit for one of her performances that night, and she completed the look with a blonde and pink wig.

Cher went for another all-black look at the London premiere of “Mamma Mia! Here We Go Again.” 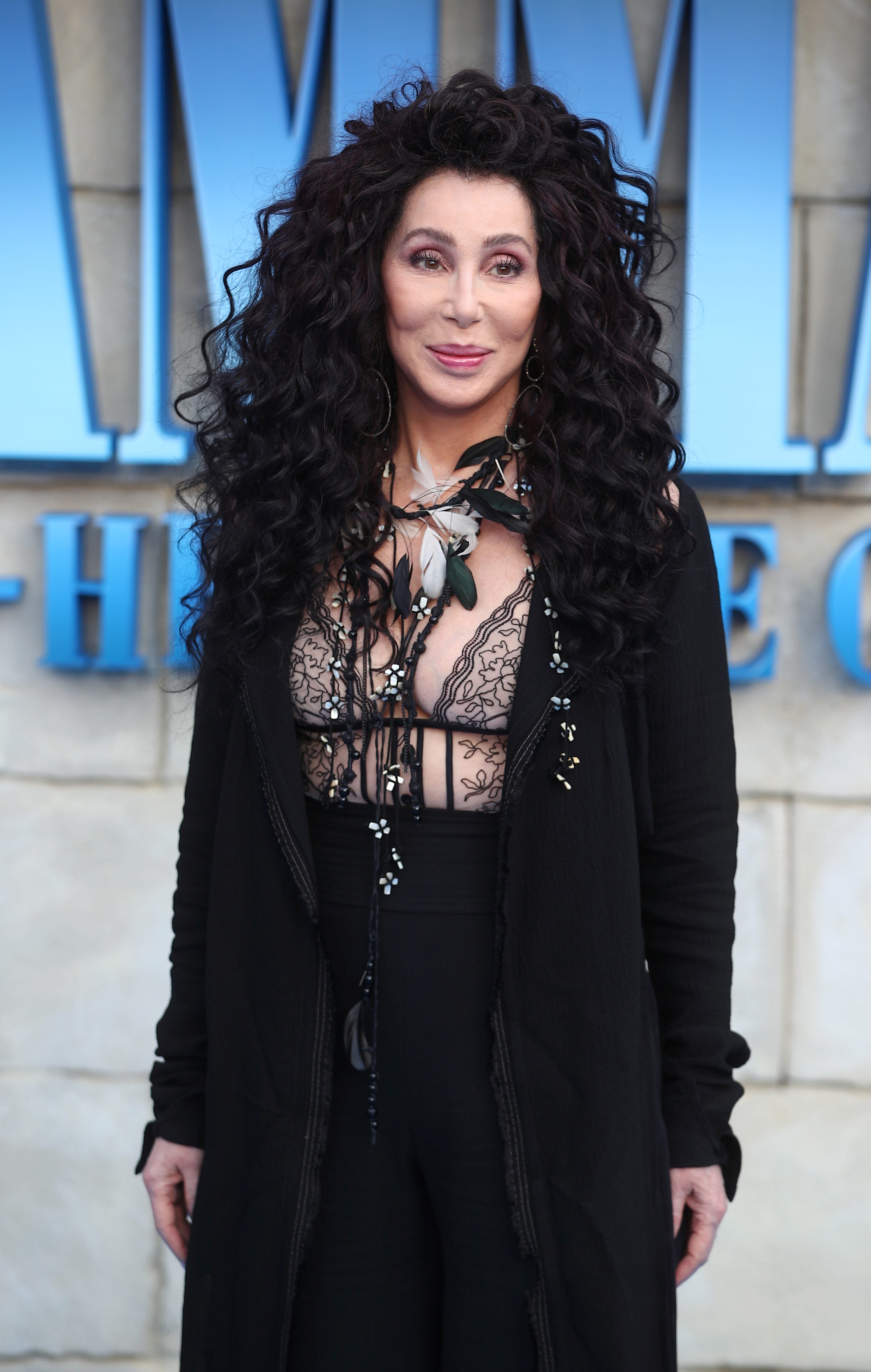 Cher showed off her big curls and styled her floor-length, black gown with an elaborate necklace for the premiere.

Cher wore a 1970s-inspired purple outfit during her Here We Go Again Tour in 2019. 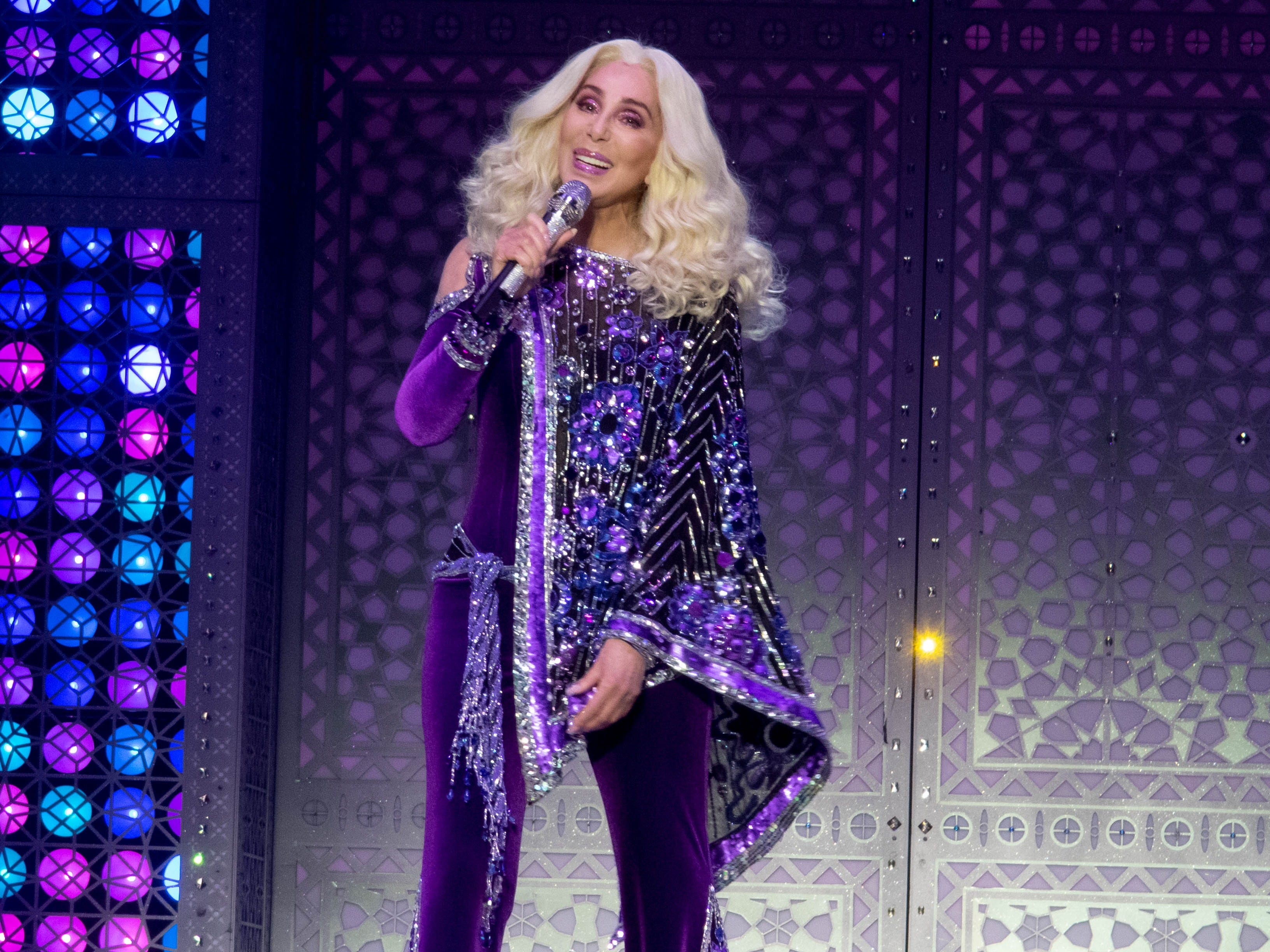 She rocked platinum-blonde curls and wore a purple, velvet jumpsuit with an embroidered poncho.