14 chefs share what they really order from fast-food restaurants Hollis Johnson/Business InsiderIn-N-Out was a favourite among the chefs we spoke to.

Although you may think that chefs only dine at high-end restaurants and cook for themselves, many have a big love for fast food.

And although everyone has their favourite order, if you’re looking for a new item to try, who better to go to than a professional chef? And so, we asked 14 chefs what they order when they hit the fast-food drive-thru.

Read on to see their answers, which ranged from tacos to burgers to everything in between.

In-N-Out is the favourite fast-food restaurant among these professional chefs. 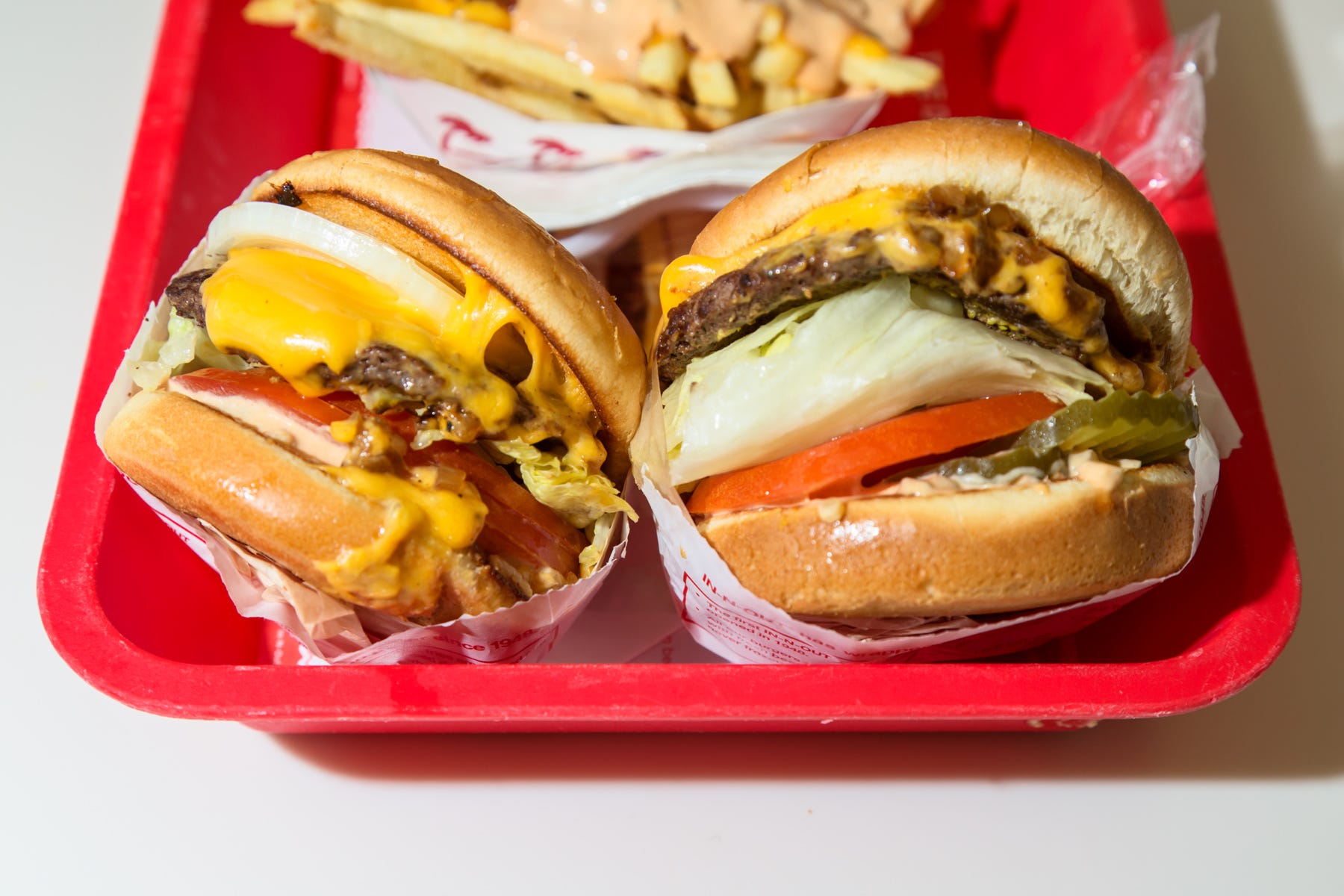 “When I first moved to Sacramento, California, this was just the best burger around and it was cheap, too,” Chef Carl Yeh of Sansei Seafood Restaurant and Sushi Bar, in Maui, Hawaii, said of In-N-Out’s double cheeseburger topped with the chain’s special spread and grilled onions.

Chef Karla Lomeli, instructor at Auguste Escoffier School of Culinary Arts in Boulder, Colorado, said she also loves In-N-Out, and she gets her Double-Double with whole grilled onions.

Chef Jeff Haskell, culinary director of In Good Company Hospitality in New York City, told Insider that he loves the plain hamburger but puts french fries between the buns.

“Their burgers aren’t like regular fast-food burgers,” Haskell said. ” … Their lettuce, tomatoes, and onions are always so fresh. I like to put my fries inside the burger. The salty fries add another flavour dimension to the already delicious burger, bringing out the best in each other when eaten together in one mouthful!” 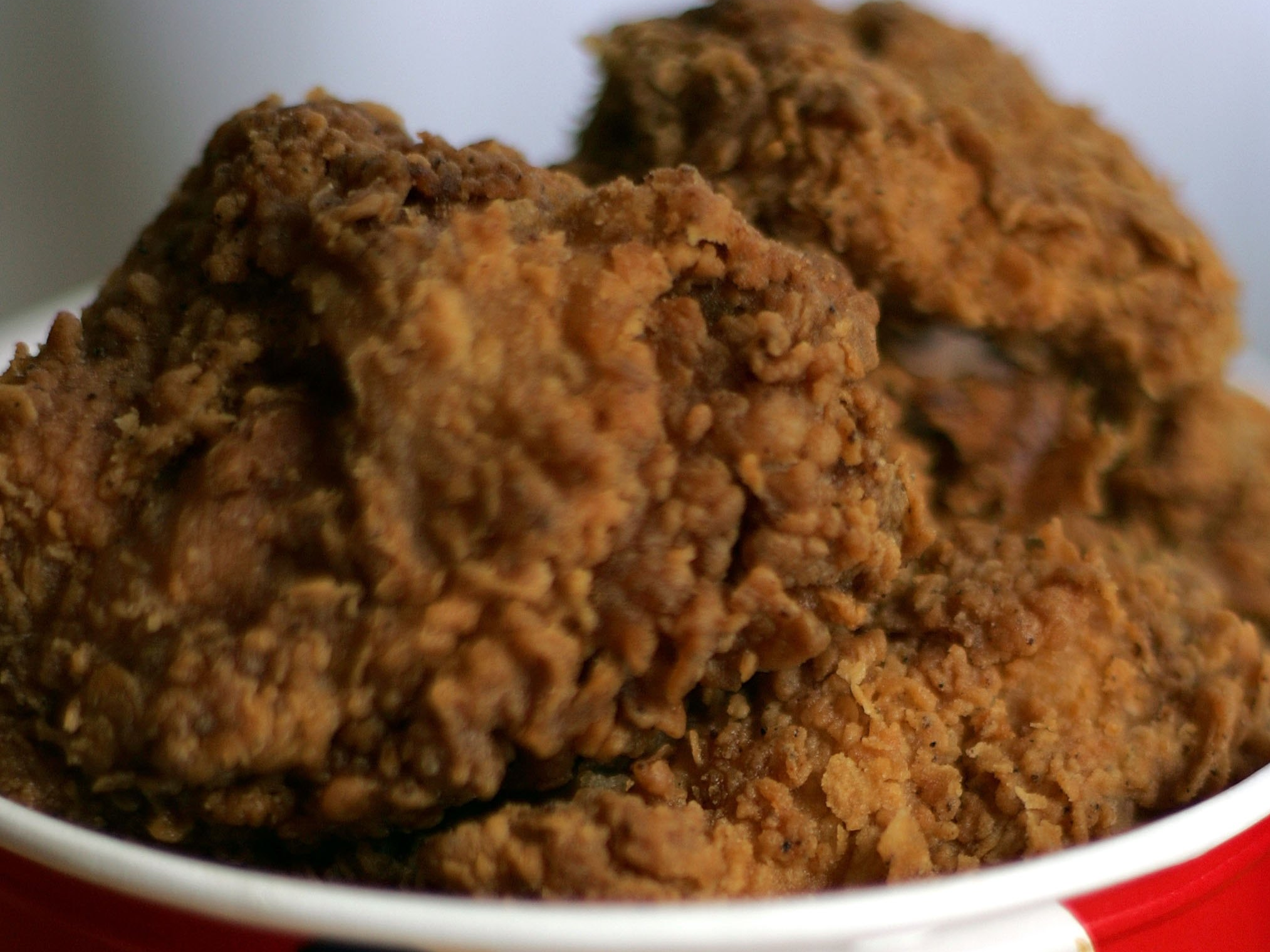 Yeh also called KFC’s chicken the “only fried chicken I knew growing up in Pennsylvania.” He said he loves this greasy dish, calling it “good old-fashioned comfort food.”

One chef called McDonald’s sausage, egg, and cheese McGriddle is a “masterpiece.” 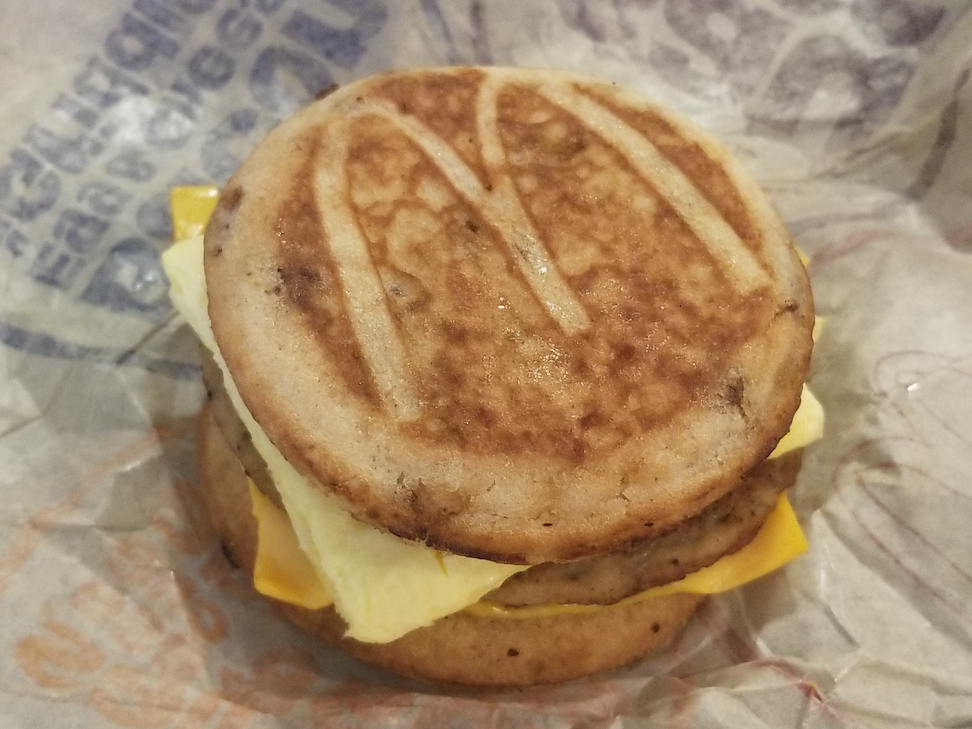 Andrew LaSane for InsiderMcGriddles are made with pancakes.

He added, “Pair it with a hash brown with hot sauce and you’ve effectively got a quintessential American diner-style breakfast that you can eat one-handed on your way to your destination.”

The Five Guys bacon cheeseburger is great, according to one chef, thanks to the grilled mushroom add-on. 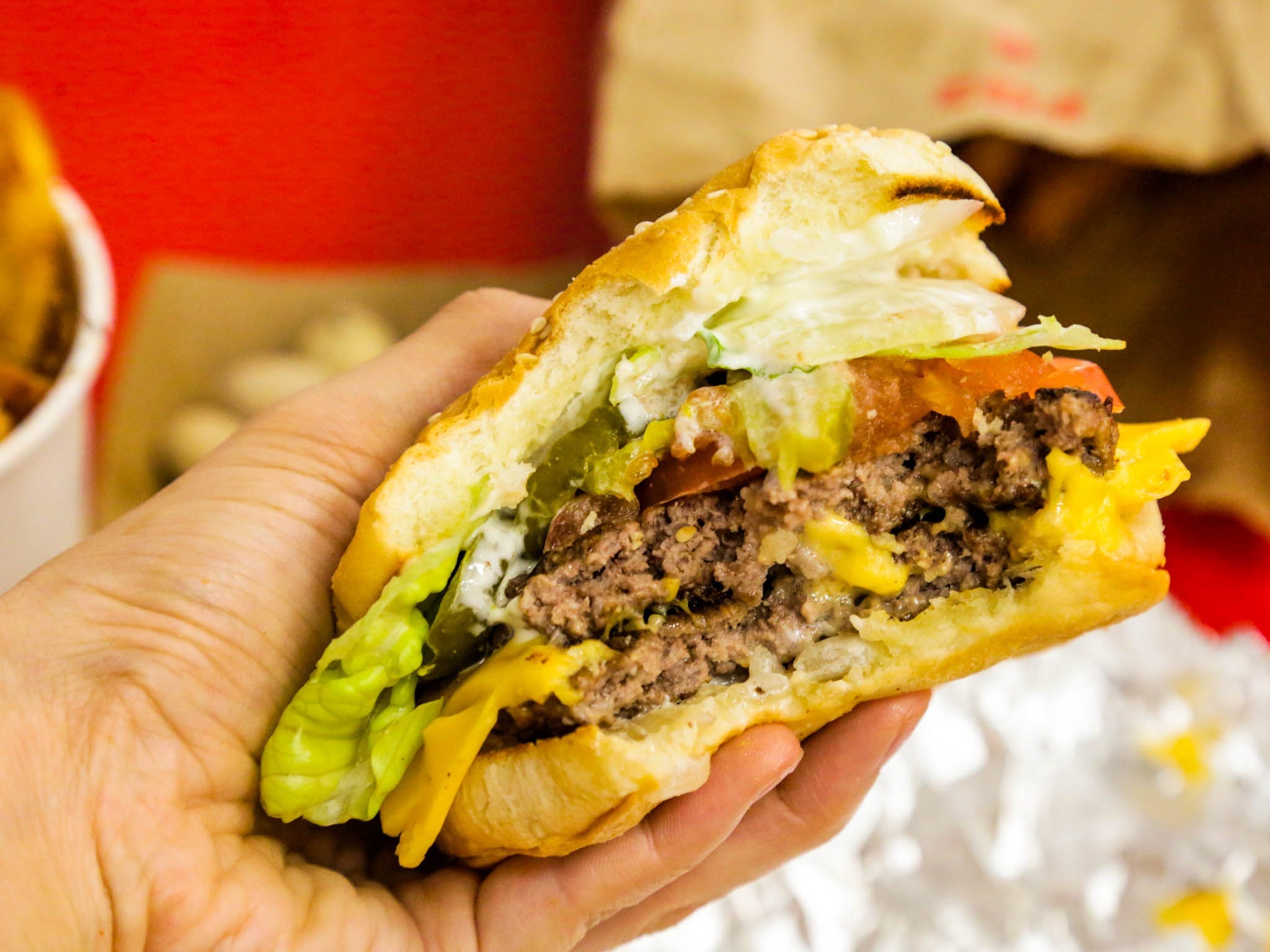 Irene Jiang / Business InsiderThe Five Guys burgers are even better with add-ons, according to one chef.

“[Five Guys] is my go-to place for a burger,” Jordan Buendia, executive chef at Rococo Steak in St. Petersburg, Florida, said. “The burgers are made as soon as you order and you can choose your exact toppings.”

Buendia said he pairs his burger with grilled onions and mushrooms. He also recommends the Cajun fries, which he said are always served hot and are generously portioned.

Jack in the Box’s tacos have a perfect meat-to-sauce-to-cheese ratio. 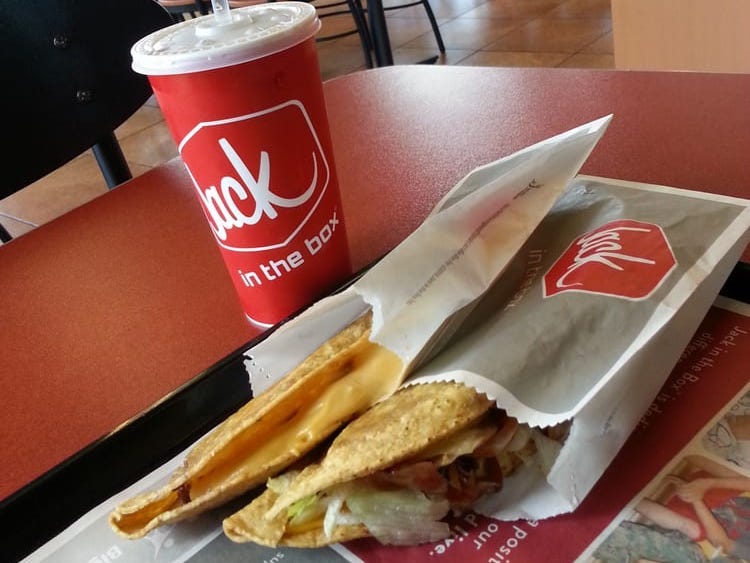 Alfred L./YelpOne chef loves the price of Jack in the Box’s taco.

Chef Chanel Hayes, executive chef at Auguste Escoffier School of Culinary Arts, said she loves the two-taco deal at Jack in the Box because “they are easy to eat on the go and two are less than $US1.50.”

She called the tacos “greasy goodness,” adding that they’re always crispy and “the sauce mixes nicely with the meat and American cheese and there is even some freshness with the lettuce.”

The McDonald’s Big Mac reminds this chef of his childhood. Kevin Tien, chef at Hot Lola’s in Washington DC, said his usual McDonald’s order is either a Big Mac combo meal with a fruit punch, the 20-piece McNuggets, or the McChicken.

“I love McDonald’s for its convenience and consistency,” he told Insider, adding that “it reminds me of my childhood, outside of eating Vietnamese food, my grandpa would get the family McDonald’s because it was the ‘American’ thing to eat.”

Checkers’ crispy seasoned french fries and the Big Buford burger are “heaven” to this chef. 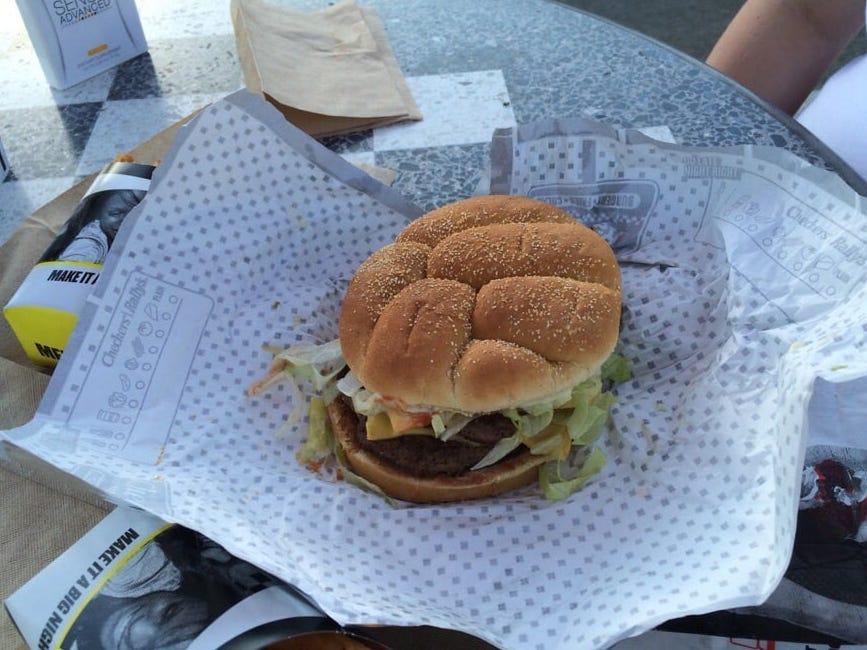 Chef Brian Duffy, from television series “Bar Rescue,” said he loves Checkers and Rally’s Big Buford burger, which has two patties, cheese, and all the fixings.

He also said the chain’s fries “have just the right amount of spice and salt, which is heaven.”

Whataburger’s Monterey Melt is a Texan staple for this chef. 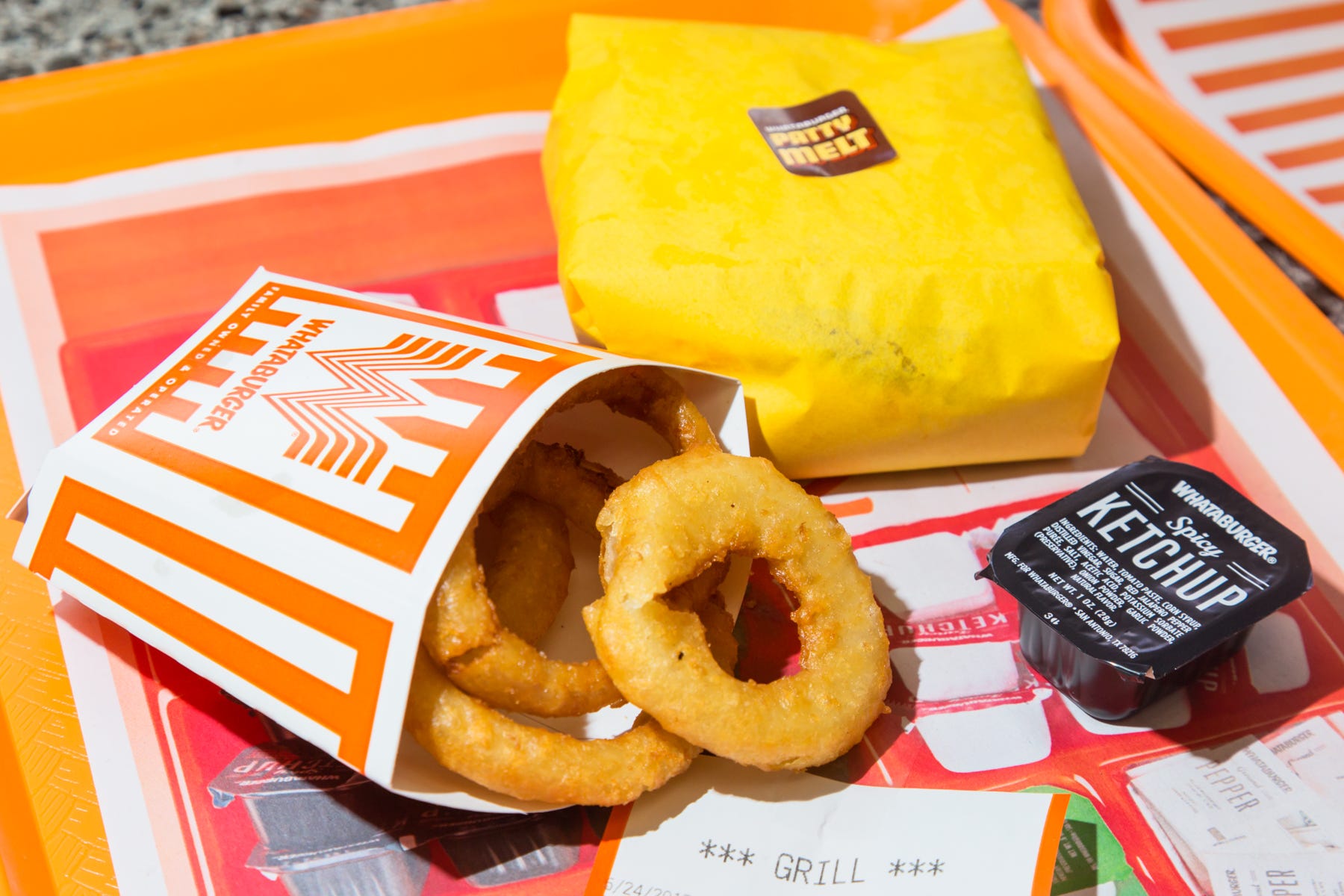 “As a Texan, I grew up eating Whataburger,” said Firoz Thanawalla, chef and owner of kitchen-gear company Chef’s Satchel. She told Insider she eats a Whataburger Monterey Melt, a patty melt with grilled peppers, onions, and jalapeno ranch, at least once a week.

“They never fail to impress,” she added.

Wendy’s Double Stack is a simple delight for this chef. 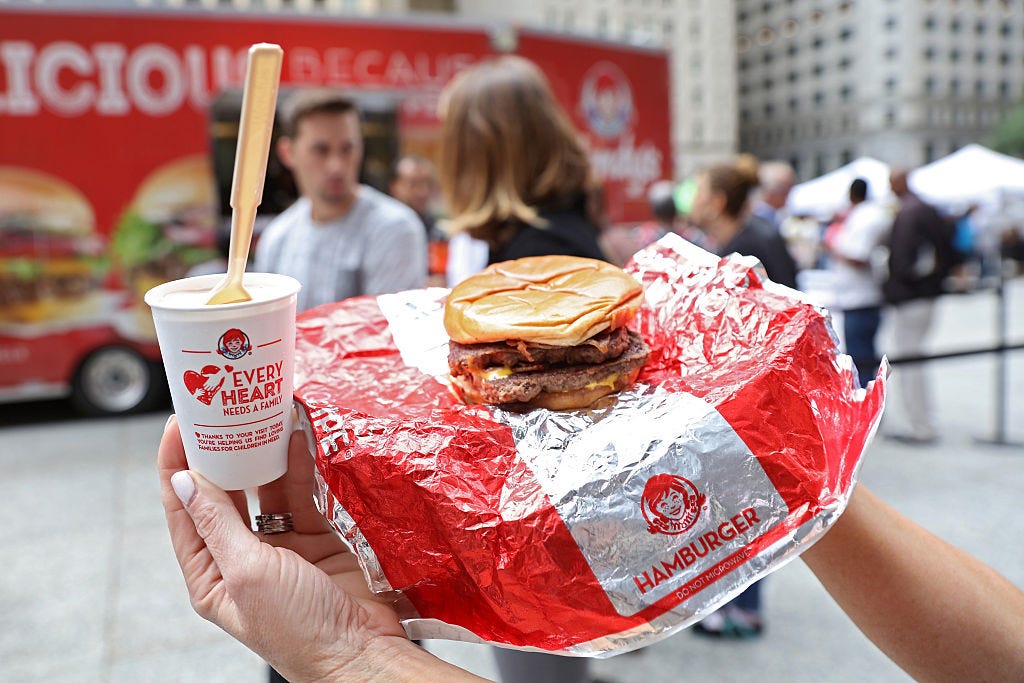 Jeff Schear/Getty Images for Wendy’sWendy’s has a few types of burgers on its menu.

Ian Rough, a corporate chef for Ocean Prime, said he loves Wendy’s simple Double Stack burger, which consists of pickle, mustard, onion, and cheese, because the “two small patties are nice and hot, so the steam in the wrapper makes the bun a little soft.”

Del Taco’s quesadilla and plain taco are iconic for a reason, according to this chef. 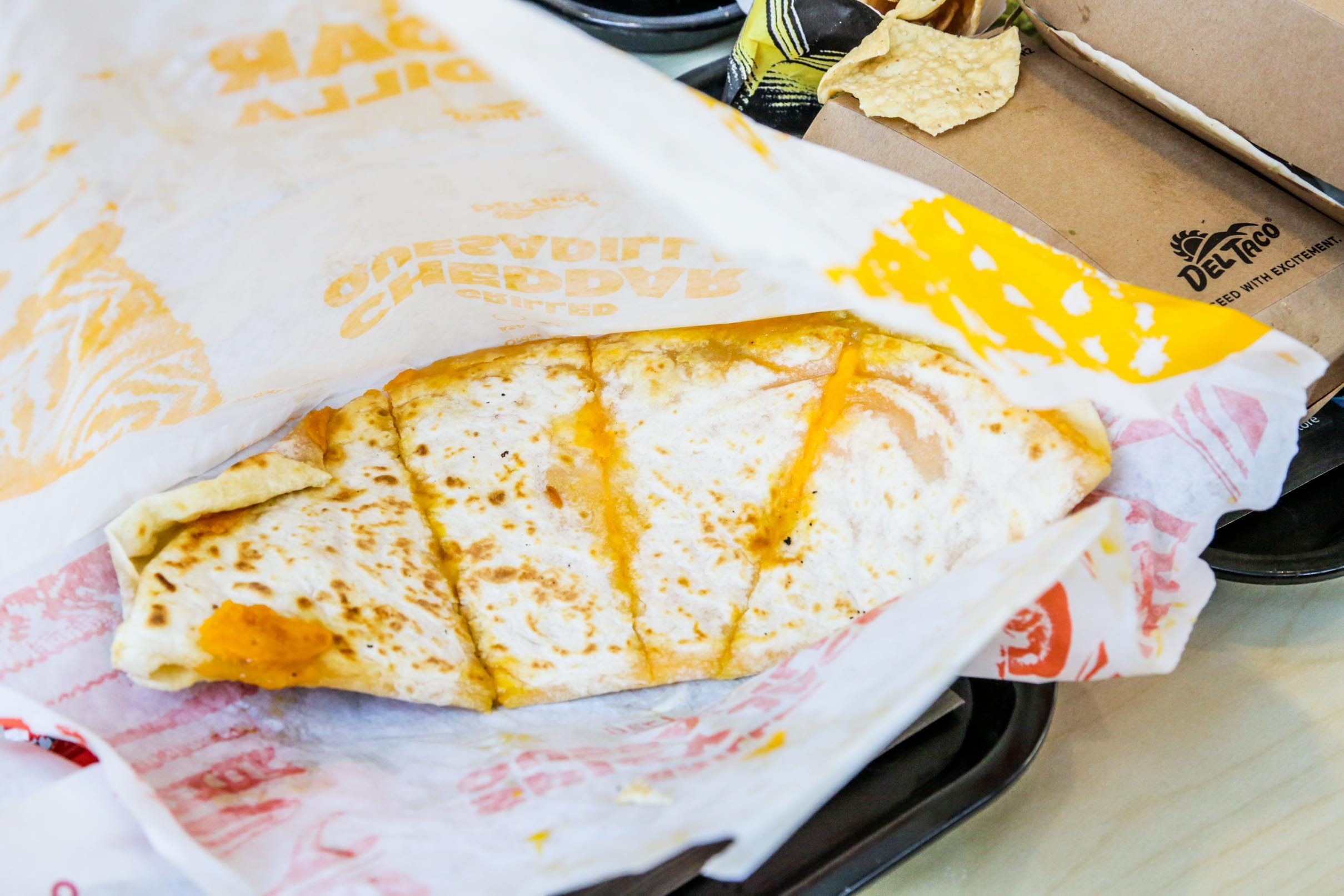 San Diego-based executive chef Kevin Templeton of Barleymash, The Smoking Gun, and Spill the Beans said he likes to order old-fashioned quesadilla and plain taco at Del Taco when he does drive-thru.

“I actually like their plain quesadillas, fries, and The Del Taco – an OG on the menu,” Templeton said. “But my favourite menu item is the Del Scorcho Hot Sauce. Best hot sauce to ever come in a packet, hands down.” 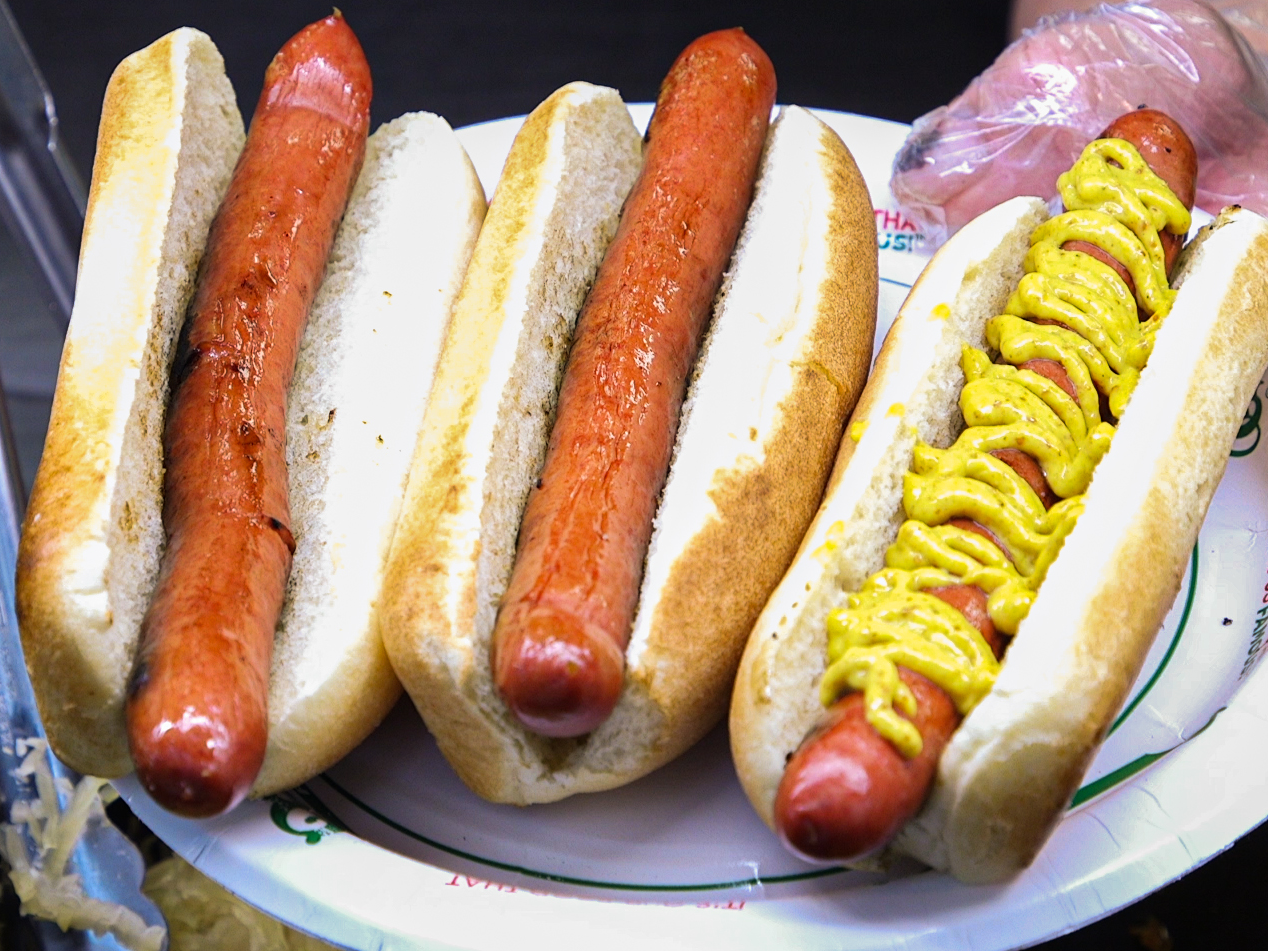 Nicole Raucheisen/InsiderNathan’s is known for its hot dogs.

Claudia Sidoti, head chef at HelloFresh, said she loves the Coney Island-style dogs at Nathan’s Famous, citing the “great spicy mustard, onions, and those Boardwalk style fries,” which she says takes her back to actually walking the Coney Island boardwalk.

Chick-fil-A’s grilled chicken club with superfoods is a go-to. 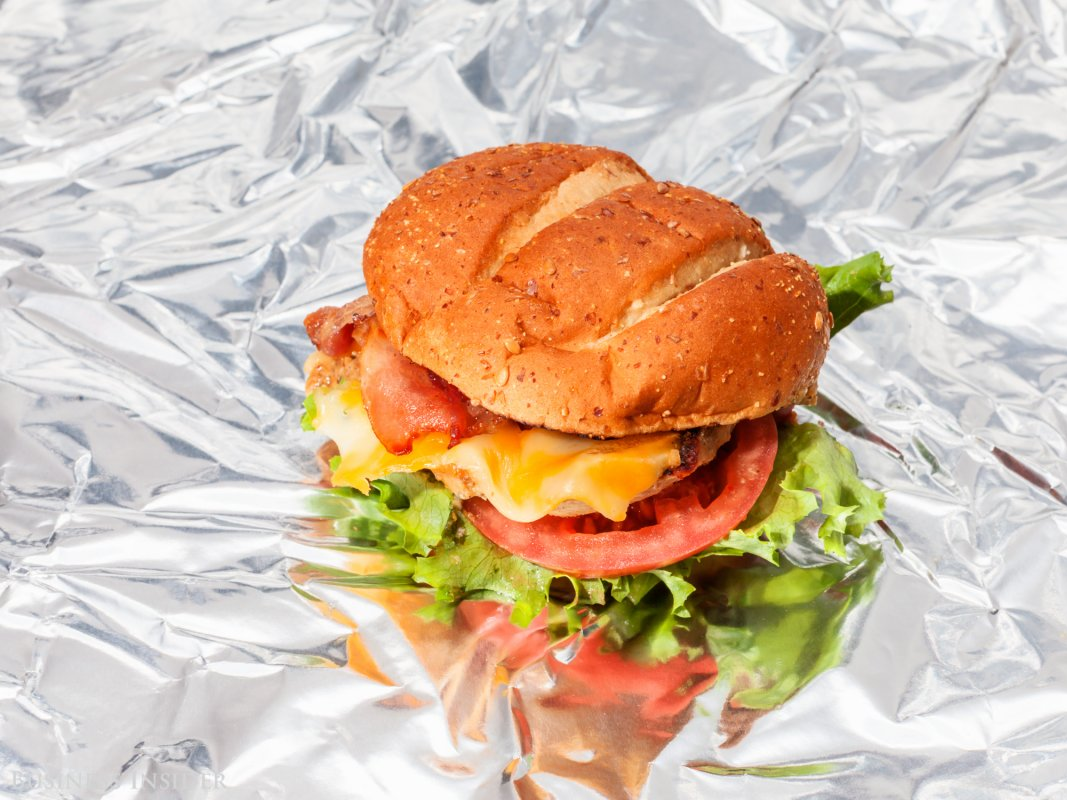 Chef Curl Ardee from Atlanta, Georgia, and owner of her own namesake spice blends, said she always opts for the grilled chicken club from Chick-fil-A.

“It’s filling but I swap the fries for the superfoods [a kale and broccoli salad] if I’m adding bacon and cheese to the sandwich,” she added. 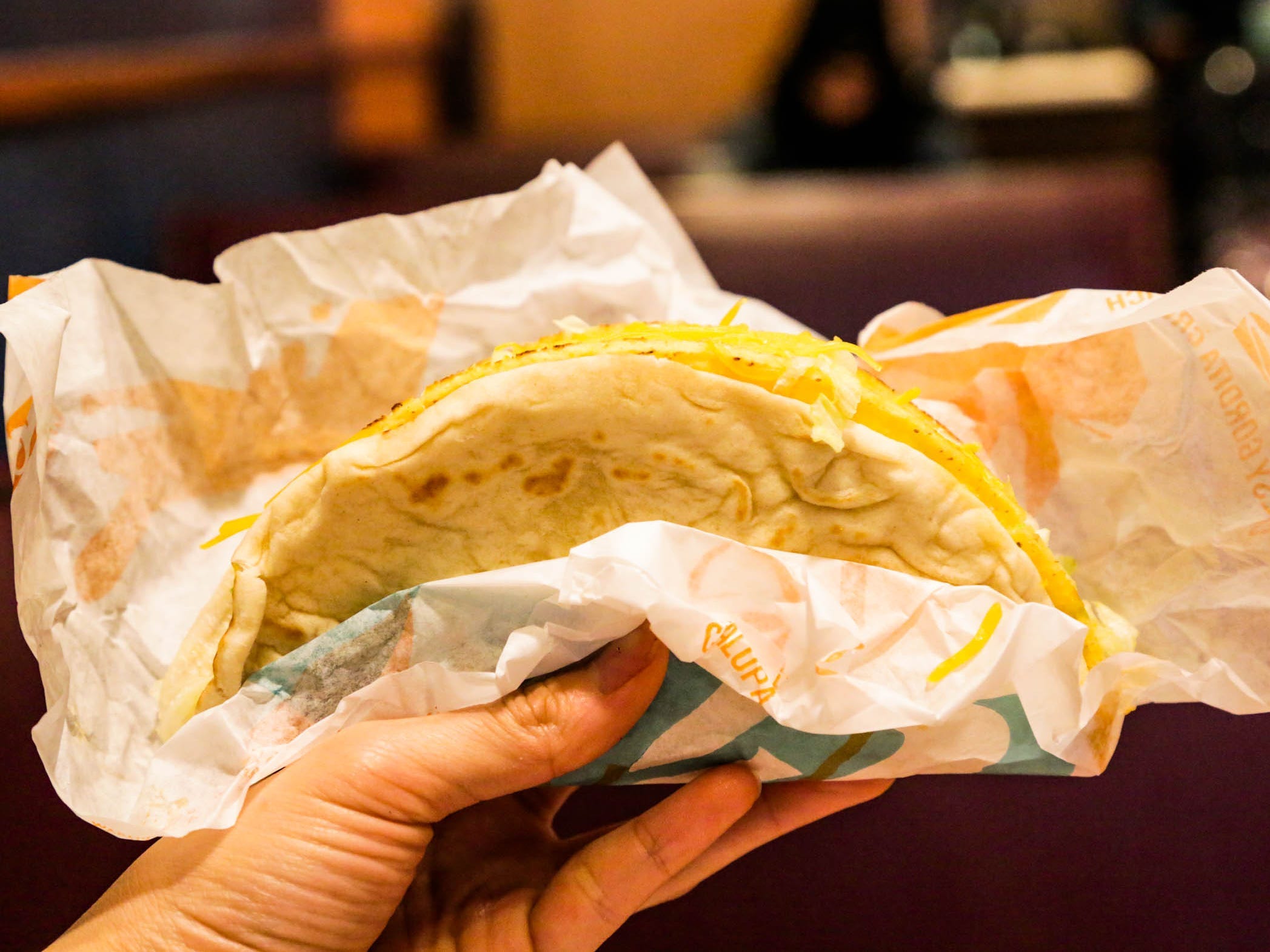 “My go-to fast-food spot after a long shift is Taco Bell,” Matt Ayala, executive chef at Cochon Volant Brasserie in Chicago, Illinois, said. “Their Double Decker taco has it all.”

“… What makes this taco the best is the layer of refried beans between a soft and crunchy shell,” Ayala added. “It’s the best taco on their menu.”

9 of the best fast-food pizza chains across the US