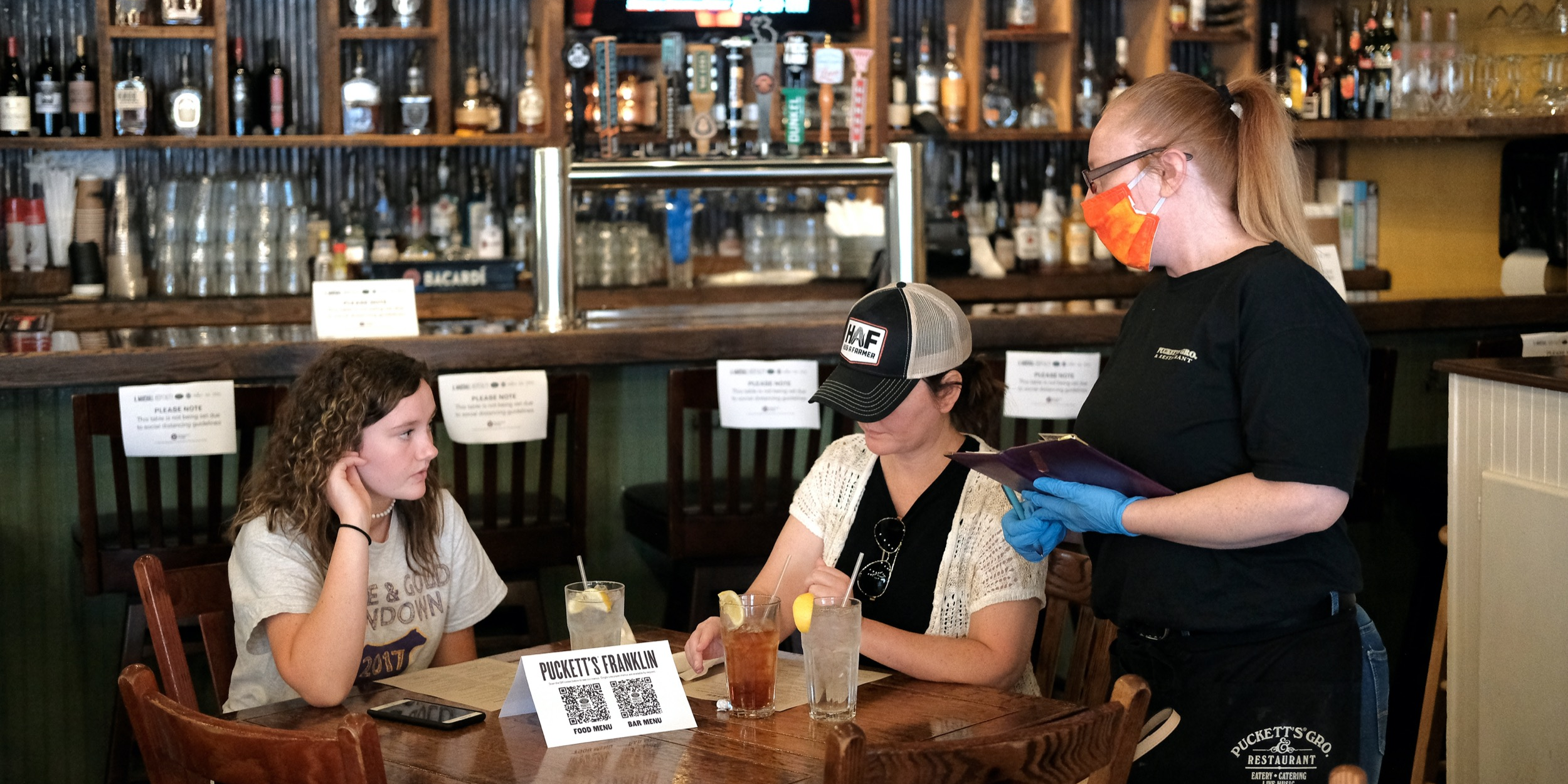 There are encouraging signs that the US economy is beginning to recover from the depths of the coronavirus pandemic that swiftly pushed the country into a recession.

The US economy was swiftly decimated by the coronavirus pandemic and pushed into a recession that could rival the Great Depression. In mid-March, parts of the country abruptly went into lockdown to curb the spread of disease, closing schools, sending non-essential workers to do their jobs at home, and shuttering restaurants, shops, and places of entertainment.

Claims for unemployment insurance spiked almost immediately, and hit a high of nearly 7 million Americans filing in one week at the end of March. In April, the US lost a record 20.5 million jobs, and the unemployment rate surged to 14.7%, the highest since the depths of the Great Depression.

But in the stretch of a month, green shoots of a recovery began to appear. States began slowly reopening their economies in April, and by the end of May, all 50 states had relaxed at least some of their coronavirus restrictions. As businesses adjusted to the new normal, some workers returned to their jobs and consumers – fuelled by fiscal stimulus and unemployment benefits – began to shop again.

In May, the US economy added 2.5 million jobs, and the unemployment rate declined to 13.3%, a surprise to economists that expected a dismal report. In the same month, retail sales rebounded, jumping 17.7%.

To be sure, there are signs of increasing coronavirus cases since states have reopened, prompting fears of a surge that could lead to more shutdowns and further hurt the US economy. Still, US states have continued to carefully reopen with measures in place to protect workers and consumers.


Read more:
Heath Jones is a US Army neuroscientist whose side hustle is scooping up real estate for passive income. Here’s how he leverages a simple strategy for extra cash.

Given the speed of the rebound, economists and analysts have started relying more heavily on real-time data, or so-called high-frequency indicators that have less of a lag than the nonfarm payrolls print or monthly retail sales figures.

A number of them are showing that industries hit hard by the coronavirus pandemic, such as restaurants, hotels, and airlines, are starting to recover as the economic reopening pushes forward.


Read more:
Wall Street’s best US and international stock pickers have tripled their clients’ money since 2010. The duo break down 5 future-proof companies that could keep investors ahead of the pack through 2030.

1. TSA travellers are starting to tick up 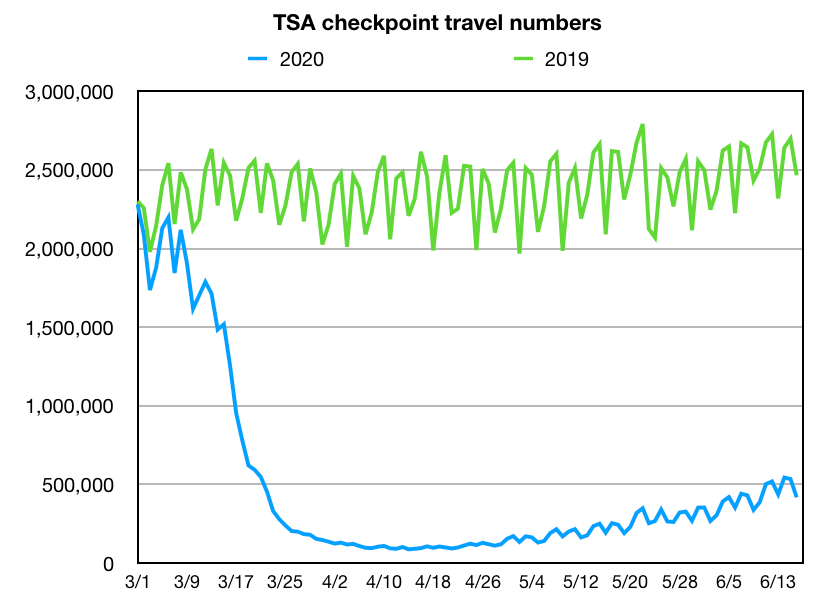 Airlines were hit hard by the coronavirus pandemic, as countries around the world banned non-essential travel to keep COVID-19 from spreading.

But starting in April, travel has started gradually creeping up, according to TSA checkpoint numbers. Although current travellers passing through TSA checkpoints remain well below levels from a year ago, the trend line is slowly but surely headed in the right direction.


Read more:
Morgan Stanley says investors are misreading the implications of a ‘blue-wave’ election outcome – and provides 2 recommendations for traders preparing for a Biden victory 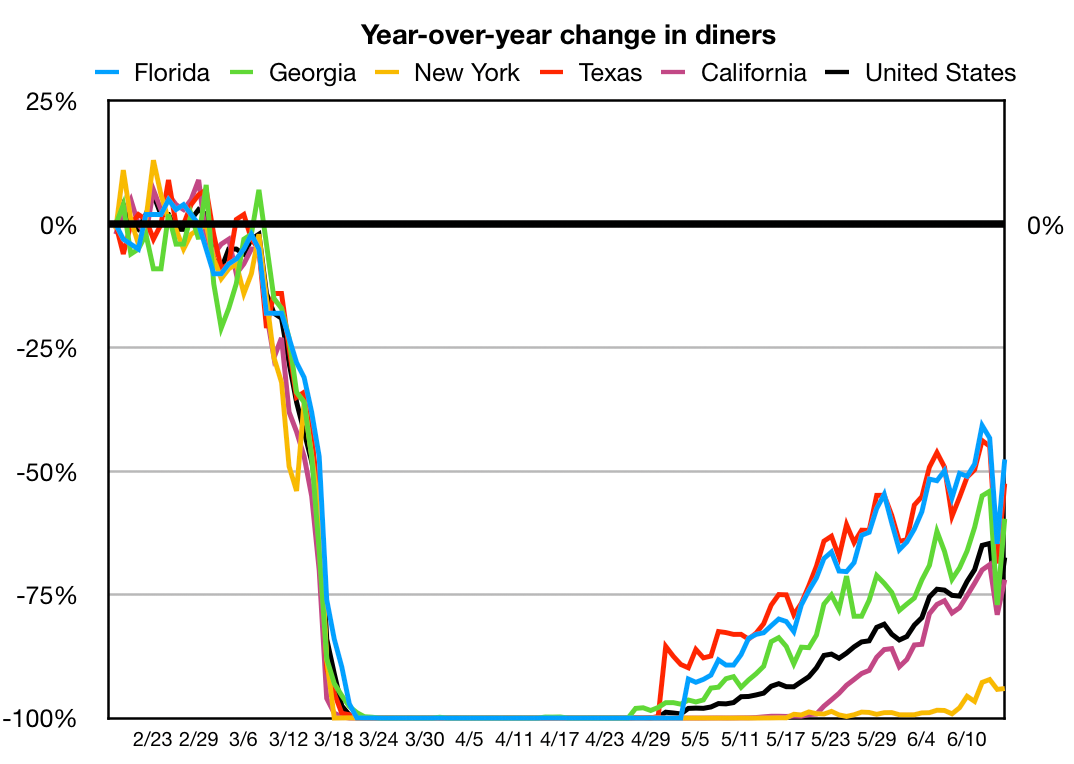 Data from OpenTable shows that while restaurant reservations remain in a slump compared to a year ago, they’re slowly recovering as the economy reopens.

The chart above shows that in late March, seated diners across the country fell 100% from a year earlier as most restaurants shuttered due to COVID-19. But in the last few weeks, that traffic has recovered and is now about 70% below where it was a year ago, a marked improvement.

OpenTable tracks seated diners from online, phone, and walk-in reservations in cities where it is present. The above data reflects only restaurants that have chosen to reopen in each given market.

3. Hotel activity is beginning to recover 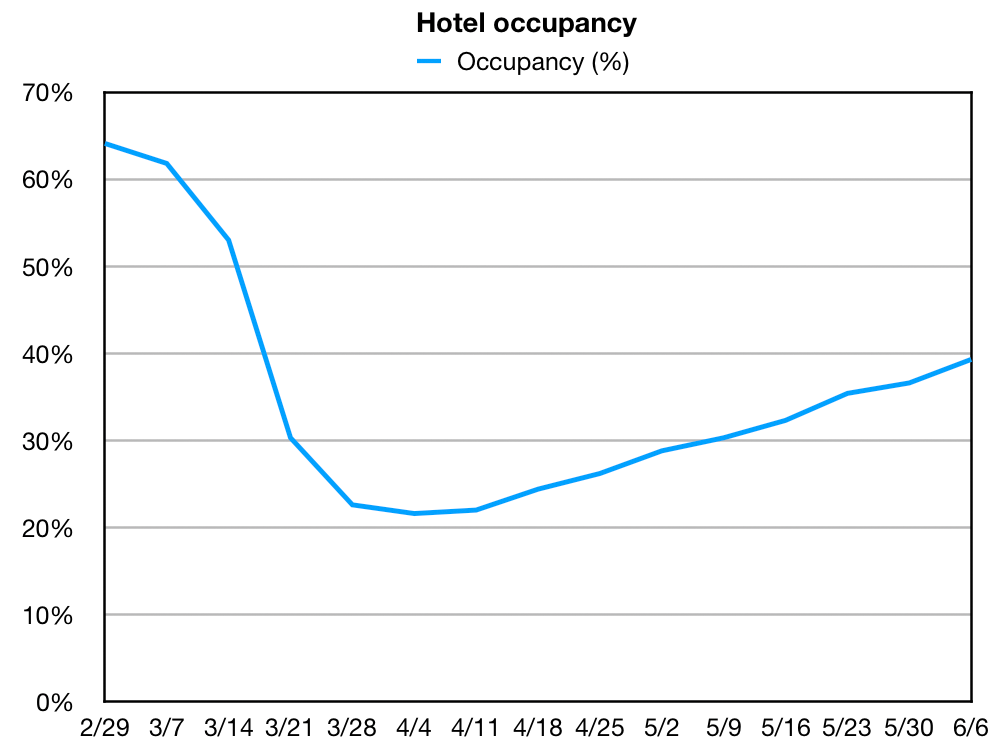 As travellers stopped flying, hotel occupancy took a major hit in early April. But, as people begin to come out of lockdowns, they’re again staying at hotels.

In late February to early March, hotel occupancy was at about 60% just slightly less than year-ago levels, according to data from STR, a firm that provides data and analytics to the global hospitality industry.

Hotel occupancy bottomed out in April, just over 20%, more than 70% below what it was a year prior. But since then, occupancy rates have been ticking up on a weekly basis and now sit at about 40%, down about 45% from a year earlier.


Read more:
BANK OF AMERICA: Buy these 13 cheap stocks that have unexpectedly strong finances, making them great bets for the next phase of the rally 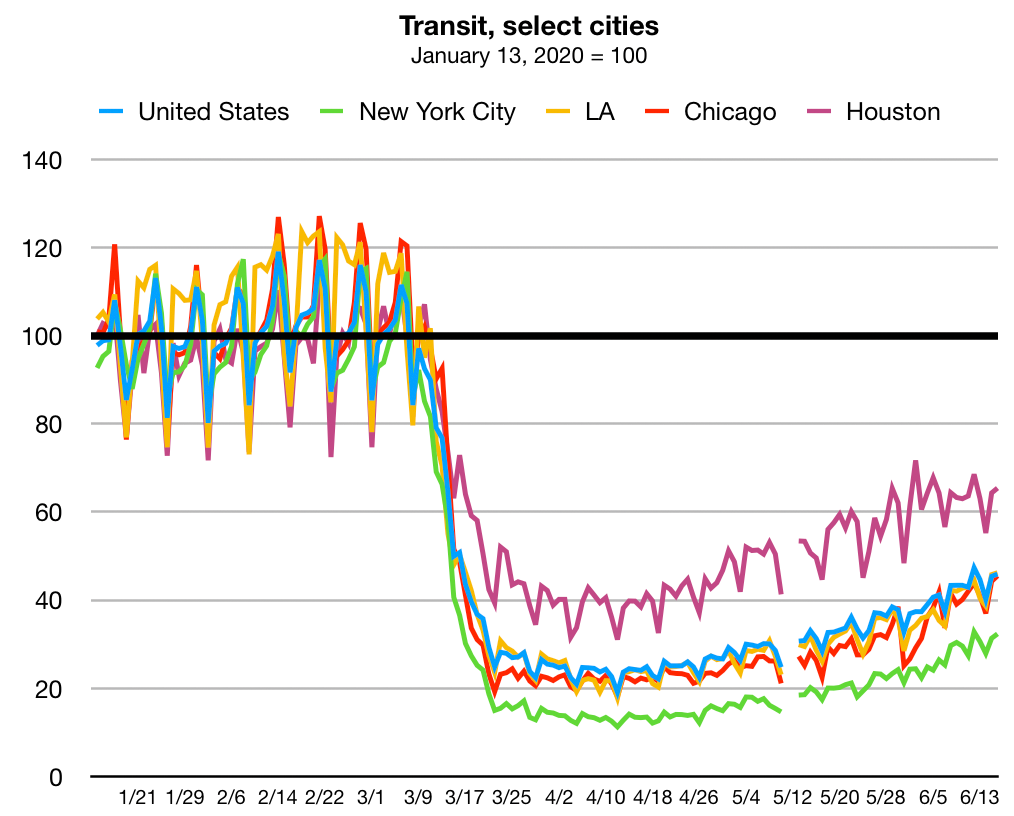 Apple Mobility data also shows that while ridership on public transit is below year-ago levels, it’s seen an uptick since states began to lift lockdown restrictions.

The data shows the changes in ridership since January 13, 2020. In mid-March, riders slumped as the country shutdown to control COVID-19. But since the beginning of April, people have slowly begun to return to public transit in major cities such as New York City, Los Angeles, and Houston.

5. Workers are going back to their jobs 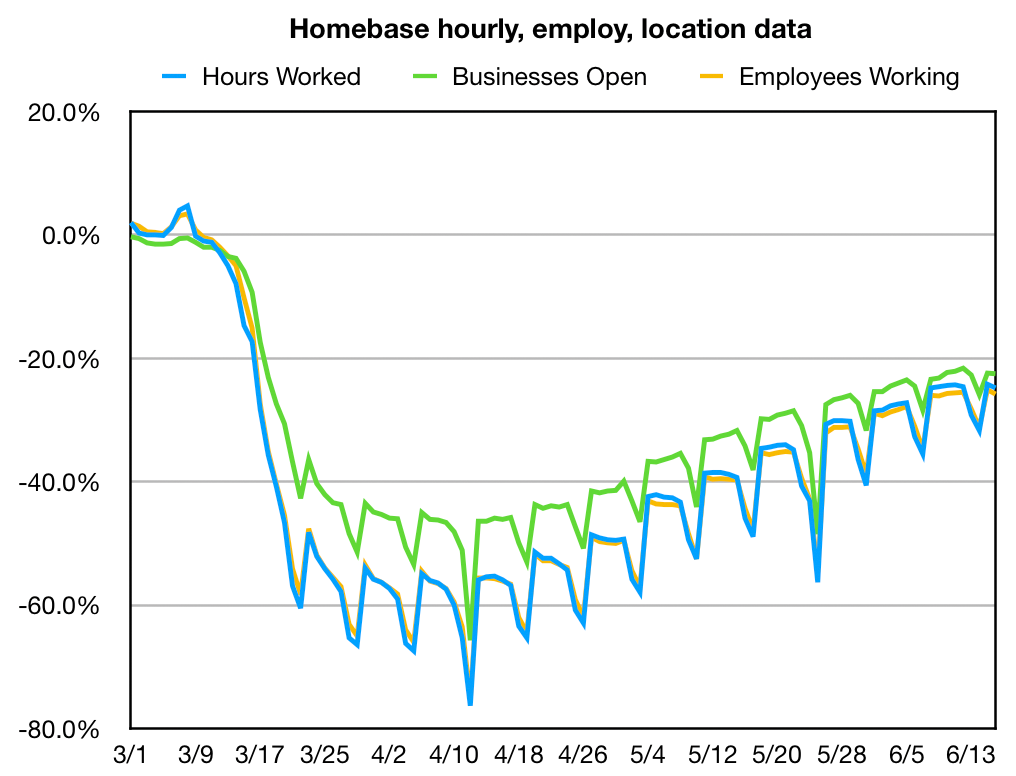 The chart above shows data from Homebase, an employee scheduling and time-tracking tool used by many local businesses in the US. Its data shows that in mid-March, hours, employees working, and locations opened slumped – in line with when shutdowns began to contain COVID-19.

But since bottoming out in mid-April, locations open, employees working, and hours worked have all been trending up, according to Homebase data. They haven’t yet recovered to March levels, but are moving in that direction.

Using the same data, researchers at the St. Louis Federal Reserve found that the US labour market continued to recover “at a healthy pace” in June, following May’s surprisingly positive jobs report.