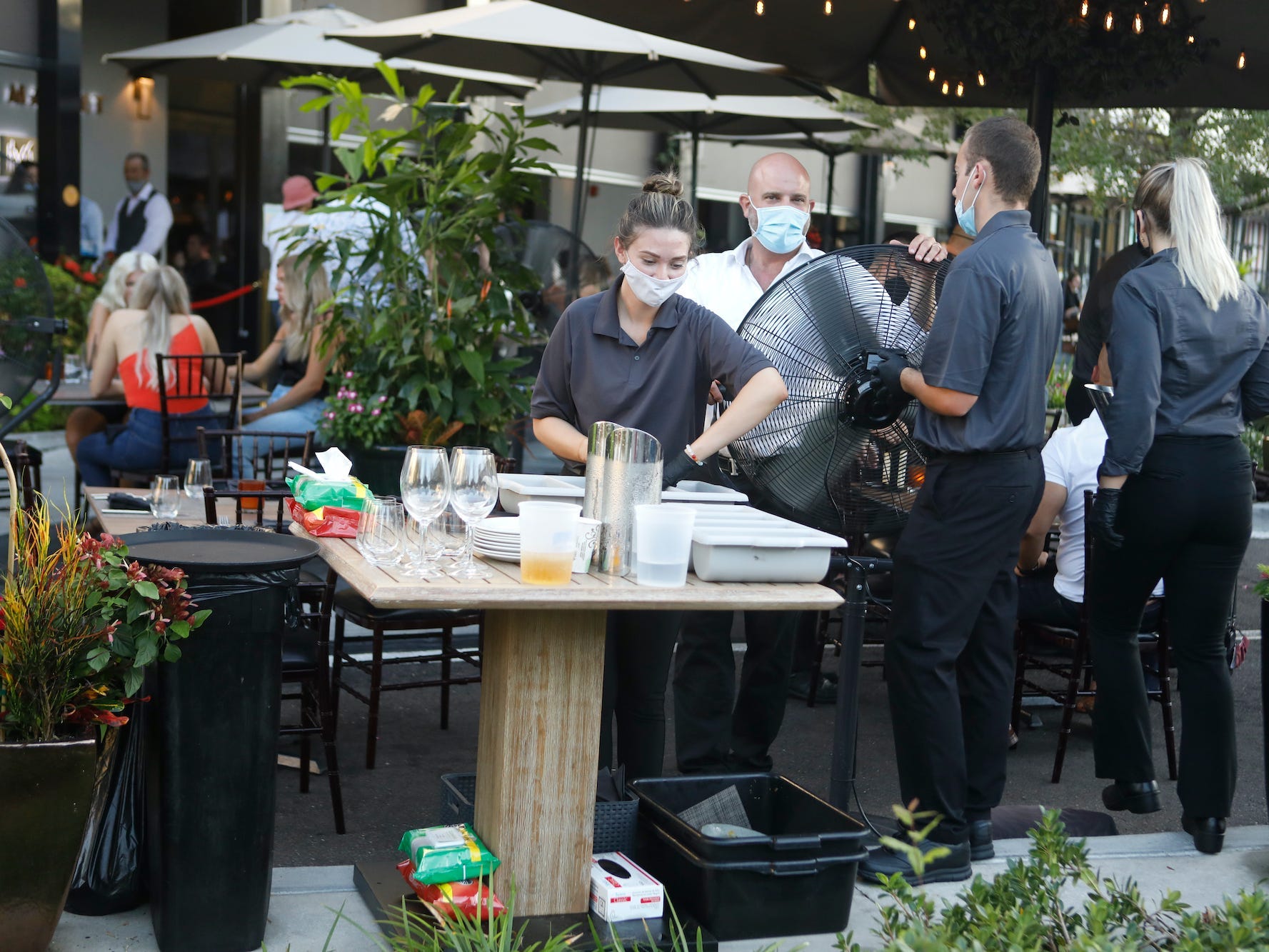 Octavio Jones/Getty ImagesRestaurant staff tend to patrons having dinner on the first day of full capacity seating on September 25, 2020 in Tampa, Florida.

The latest job report showed little improvement to job gains as the pandemic continues. Only 49,000 jobs were added last month, much lower than the 105,000 economists expected to see in the report.

Last month’s gains were also much smaller than in several previous months, and come after December had a revised figure of 227,000 jobs lost.

Almost a year after the pandemic affected industries across the economy, some are still having a hard time increasing their levels of employment to where they were before the beginning of the crisis. Industries that tend to offer lower wages are faring far worse amid the pandemic than those with higher wages.

“Some of the hardest hit industries also pay their employees on the lower-end of the wage spectrum,” Nick Bunker, director of economic research at Indeed told Insider in an email. “The result is that employment in low-wage industries remains the most depressed, at 11.9% below February 2020 levels.”

The following chart highlights the per cent change in employment from February 2020 to January 2021 across different industries along its vertical axis. We also included median hourly wage data from the Bureau of Labour Statistics as of May 2019 along the horizontal axis:

Bunker said that the highest-paying industries were only down 3% and overall employment was down 6.5%. Some economists call this unequal recovery a K-shaped recovery, where more affluent Americans are seeing their fortunes improve while lower-wage workers continue to struggle.

As seen in the chart, the hardest-hit industries are some of the ones that are struggling the most to increase employment.

“The coronavirus pandemic and the efforts to contain it are clearly the driving forces behind the largest employment drops across industries,” Bunker wrote in an email. “Motion picture and sound recording industries have seen demand for their services drop as fewer people can go to the movies, and employment there has fallen by 40.6% since February 2020, the largest drop among industries.”

Employment in motion picture and sound recording industries was 262,600 in January 2021, compared to 441,900 in February 2020. Movie theatres had to close early on in the pandemic, and film and TV productions have experienced delays.

Bunker wrote industries like accommodation are also still below their levels of employment last February because they “are clearly constrained by the public health situation.”

One outlier is air transportation. The industry has relatively high pay, with a median hourly wage of $US30.04 based on 2019 data, but is still about 20% below the level of employment in February.

Some airlines may continue to struggle even after receiving $US15 billion in federal aid to pay employees. After American Airlines and United brought back furloughed employees, Americans Airline warned 13,000 employees and United Airlines warned 14,000 employees that they may be furloughed when the federal payroll aid expires next month.

Employment in food services and drinking places is also far below its level last February. Employment in this industry was 12.3 million in February 2020 and has dropped to 9.9 million in January, a per cent decline of 19.2%.

According to a survey from the National Restaurant Association, about 110,000, or 17%, of US restaurants have permanently shut down. The survey noted many of these were in business for many years, with an average business being open for 16 years.