Channing Tatum and Jessie J have reportedly split after dating on and off for almost 2 years. Here's a timeline of their relationship. 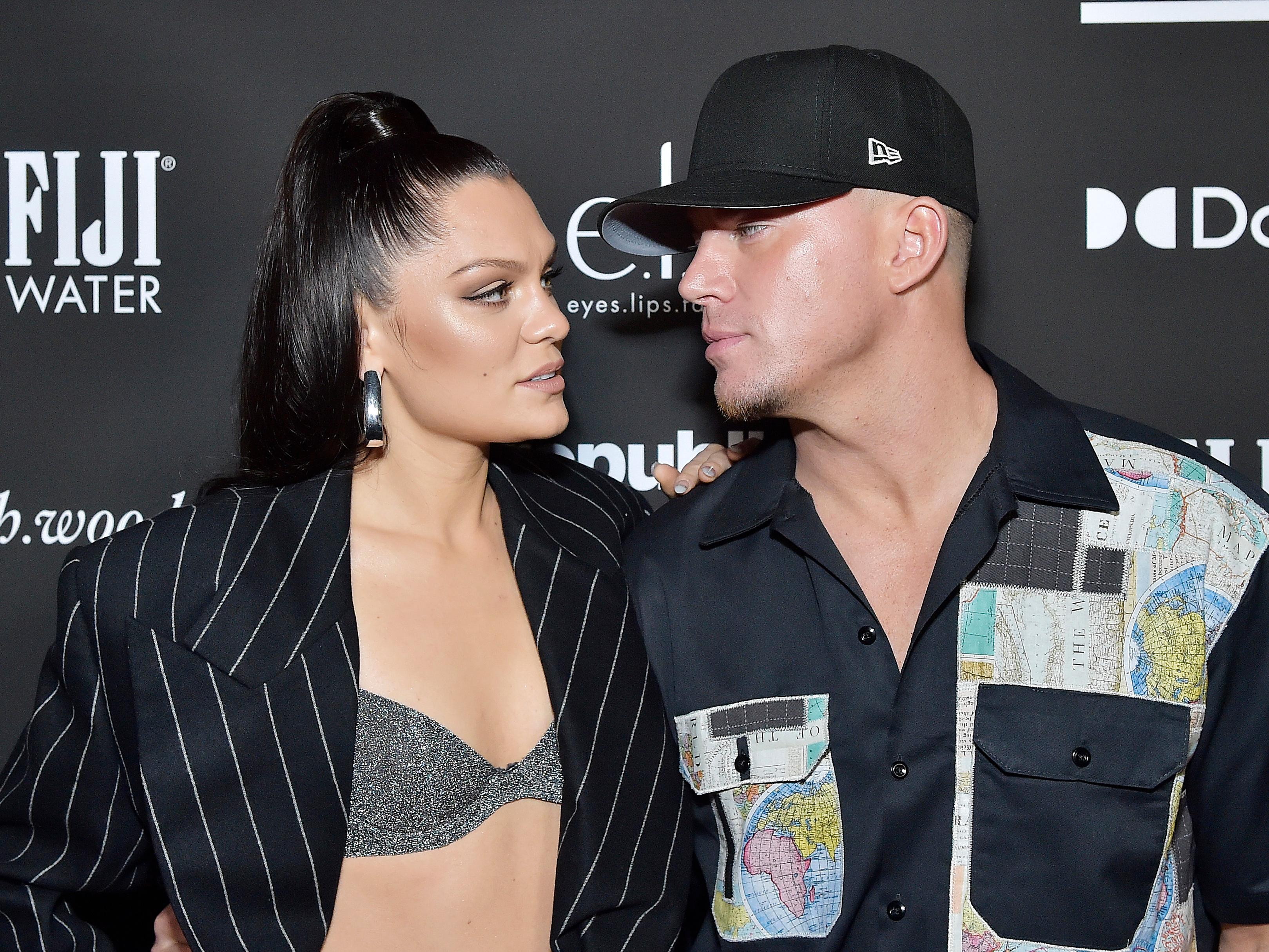 Channing Tatum and Jessie J have reportedly been dating on and off since 2018, but the actor and musician may no longer be a couple.

Earlier this month, a source told People that Tatum and Jessie had split, though neither star has publicly commented on the report. Representatives for Channing Tatum and Jessie J didn’t immediately respond to Insider’s request for comment.

Here’s a timeline of Tatum and Jessie’s relationship so far.

October 2018: Jessie and Tatum were first spotted together.

caption
Jessie J and Channing Tatum were reportedly spotted at a group dinner in Seattle, Washington.

Several months after Tatum announced his separation from his then-wife Jenna Dewan, the actor was spotted with musician Jessie J.

In early October 2018, an eyewitness source told Entertainment Online that they had spotted the actor and singer together in Seattle, Washington. They were reportedly sitting next to each other in a group of people, and Tatum had his arm around Jessie.

The next month, Tatum was spotted at one of Jessie’s shows with a very special guest: his 5-year-old daughter, Everly. According to Cosmopolitan, they attended Jessie’s show at Wiltern Theatre.

That same month, Jessie went to the opening night of the “Magic Mike Live” in London, which Tatum created and directed. She shared a photo on an Instagram story where she wrote, “Congratulations @channingtatum what a show … Ladies and gentlemen you don’t want to miss this.”

Later in the month, Tatum attended another one of Jessie’s shows. This time, he shared it on his Instagram.

He posted a photo of Jessie on stage with the caption, “This woman just poured her heart out on stage at the Royal Albert Hall. Whoever was there got to witness something special. Wow.”

The two kept things quiet online for a while until Tatum left a flirty comment on one of Jessie’s Instagram photos.

When she posted a picture of herself in a bikini surrounded by plates of food, Tatum commented, “Hottest Instagram food model in the game right now.”

In case there was still any doubt that the two were an item, Tatum cleared things up in a sweet Instagram post dedicated to Jessie for her birthday.

He posted a photo of her with the caption, “Wishing you the happiest day filled with all the love and all the light. You came into this world on this day and lit it on fire. You have blessed our eyes, our ears, our hearts and our lives. So thank you for just being you. You are so very special. Happy birthday Baby.”

May 2019: Tatum apparently lost a bet to Jessie and had to post a revealing photo on Instagram.

caption
Channing Tatum had to post this after losing to Jessie J in Jenga.

Tatum posted a revealing picture of himself in the shower on Instagram with the caption, “I lost a game of Jenga to Jessica Cornish. The loser (me) had to post a picture the other person (Jessica Cornish) picked … Smh and fml … I’m never playing Jenga with her ever again…”

Jessica Cornish is Jessie J’s given name, though she doesn’t often go by it publicly.

June 2019: Jessie addressed questions about having children with Tatum, and shared photos he took of her.

caption
Jessie J said she had to address questions like this more than she had in other relationships.

In an interview with Heart Breakfast, Jessie, who has spoken about her fertility struggles in the past, was asked if she and Tatum have been talking about having children.

“No! No just because he’s Channing Tatum everyone’s kind of sped us up into this, like, ‘Are you getting married? Are you doing this?’ I mean, I’ve been in relationships for a lot longer than Chan and I have in the last four, five years, but they’re not famous so no one really cares,” she said.

She jokingly added, “But he looks great naked in the shower!”

That same month, the singer also posted a series of photos of herself on Instagram with Tatum tagged as the photographer.

July 2019: Jessie shared some photos of the couple together on her Instagram story.

In early July, Jessie shared a few photos of her and Tatum on her Instagram story.

In one photo, they’re sitting together and he has his hand on her leg, and she drew a red heart around them.

September 2019: Tatum was spotted at another one of Jessie’s shows.

caption
Channing Tatum made an appearance at Jessie J’s Rock in Rio concert.

The two had a cute couple moment together on stage during Jessie’s performance at Rock in Rio in Brazil.

Tatum got on stage to film Jessie during her performance, and in a video posted on Twitter, you can see him jumping up and down.

caption
Neither star commented on the reported breakup.

In December, Us Weekly reported that after a year of dating, the couple had broken up in November. Although there was no official news from either star, a source said they were still “good friends.”

This happened around the same time that Tatum and Dewan’s divorce was finalised, over a year after they initially separated.

January 22, 2020: Tatum shared a picture of him and Jessie on Instagram.

caption
The pair posted a cute photo together.

Just as the new year began, the two were spotted together in Los Angeles, and a source confirmed to E! News that they were back together.

According to the source, “They took a few weeks apart, but ultimately decided they really care about each other.”

Tatum made it Instagram official a few days later when he posted a cute selfie of the two of them with the caption, “Gonna watch this unicorn sang tonight. Then we gonna get it in! Horns out!”

Tatum stood up for his girlfriend online after an Instagram user commented, “Jenna looks better with you” on a photo Tatum had posted of him and Jessie.

The actor responded, “hey Alex i don’t usually address sh*t like this. But you seem as good a of terrible happy people hating thoughtless person as any of them. Why don’t you seriously think about what your doing. It’s hurtful and i ain’t about it.”

In a second comment, he added, “If you can’t not be a horrible hateful person on my page and support the infinite and untouchable beauty and woman that Jess is … please kindly get TF out of here. No one wants you here. Especially me.”

January 24, 2020: They made their first red-carpet appearance together at the MusiCares Person of the Year awards.

caption
Channing Tatum and Jessie J at the 2020 MusiCares Person of the Year event.

At the MusiCares Person of the Year award ceremony honouring Aerosmith, Tatum and Jessie walked the red carpet together for the first time.

Jessie and Tatum were photographed together on the red carpet at the Clive Davis Pre-Grammys Gala.

That same day, Jessie posted a video of the two of them on Instagram with a sweet caption: “When you put the outside whispers, noise and comparisons on MUTE and turn YOUR life volume UP full blast. When you surrender and fearlessly act on the truth that always was. Love GLOWS and GROWS in a different way. Happiness from the inside out. I love you so much baby @channingtatum The way you love me and the way I love you and the way we feel it is all that matters.”

February 2020: Jessie shared a video on her Instagram story with Tatum’s daughter.

According to People, at the end of February, Jessie posted an Instagram story video of her and Tatum’s 6-year-old daughter, Everly, dancing together.

It was the first time she had posted any videos or photos with Tatum’s daughter.

Earlier this month, the two reportedly broke up for a second time.

A source told People, “They cared enough about each other to try again but realised it was better to move on. It’s totally amicable.”

The stars have yet to publicly comment or confirm the split.