CEOs On Social Media: Do As I Say, Not As I Do

As a parent I of course have tried to instill a set of rules for my children to adhere to as a means to teach them as they move along the growth ladder. All parents instill their own set of rules and values and so on to help guide the instruct their children, right?

Well let’s say that when my kids were younger, say around 3, I hung up a sign in the kitchen that read: “Don’t Touch A Hot Stove.” I made the sign big, bright and bold so they could not miss it every time they walked into the kitchen. And they followed the rule and never touched the hot stove.

Now let’s say one time they walked into the kitchen and there I was touching the hot stove, burning my fingers, screaming in pain.

“Daddy, you told us to never touch the hot stove. Why did you touch it?”

“Oh, I see… you want me to get mummy so she can take you to the hospital?”

While this may not be the best analogy the point is very clear that when it comes to social media and the use thereof, far too many CEOs are telling their employees – and the rest of the world for that matter that they know their company needs to be “doing it” yet simply do not practice what they preach.

What CEOs Are Saying To Their “Kids”

“As a percentage of overall marketing budgets, spending on social media is expected to increase 17.5% over the next five years.” That comes directly from a study conducted last year by Duke University’s Fuqua School of Business of nearly 250 top executives.

As to their preferred social media networks… 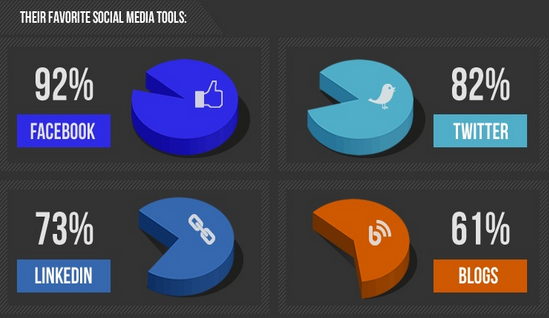 No great surprise there.

What CEOs Are Actually Doing

Just last week I wrote an article on Josh James, his company Domo and the now infamous #domosocial experiment. Josh is the living embodiment of a CEO who “gets” social media so I definitely urge you to read about his groundbreaking experiment.

Josh and his company recently teamed up with CEO.com to conduct a survey on Fortune 500 CEOs and their use of social media. Josh wrote about the findings of the survey which clearly revealed that a very large number of CEOs are “touching the hot stove” as 70%, yes 70% of all Fortune 500 CEOs have no presence of any kind on social media.

“You kids get to getting on Facebook, Twitter and Pinterest and all that good stuff. I’m far too busy to spend my time engaging with the very people who keep us in business.”

The obligatory infographic from the Domo and CEO.com survey:

It really is mind-blowing and in fact quite hypocritical when you get right down to it when you consider the fact that CEOs openly acknowledge the importance of the use of social media for their companies yet don’t see the need to be socially active themselves.

I want to leave you with quotes from Josh’s article and also one from David K. Williams who recently penned CEOs and Social Media — How Much is Too Much?

“It is my hope that CEOs come to believe in the transformative power of social media.  But if they persist in lagging far behind the general population in social media participation and not delivering value to the shareholders that is there for the taking, they may not be CEOs for much longer.”

“If we haven’t convinced you yet (of the importance of social media), consider these two results from the BRANDFog 2012 CEO Survey as the final clincher: More than 82% of respondents are likely or much more likely to trust a company whose CEO and team engage in social media. And an amazing 77% of respondents are likely or much more willing to buy from a company whose mission and values are defined through their leaderships’ involvement in social media.

The conclusion is clear: Any leader who isn’t engaged in social media today is like the leaders of 50 years ago who insisted on sending a telegram instead of dialling a phone.”

Named one of the Top 100 Influencers In Social Media (#41) by Social Technology Review, Steve Olenski is a freelance writer/blogger currently looking for full-time work. He has worked on some of the biggest brands in the world and has over 20 years experience in advertising and marketing. He lives in Philly and can be reached via email,Twitter, LinkedIn or his website.