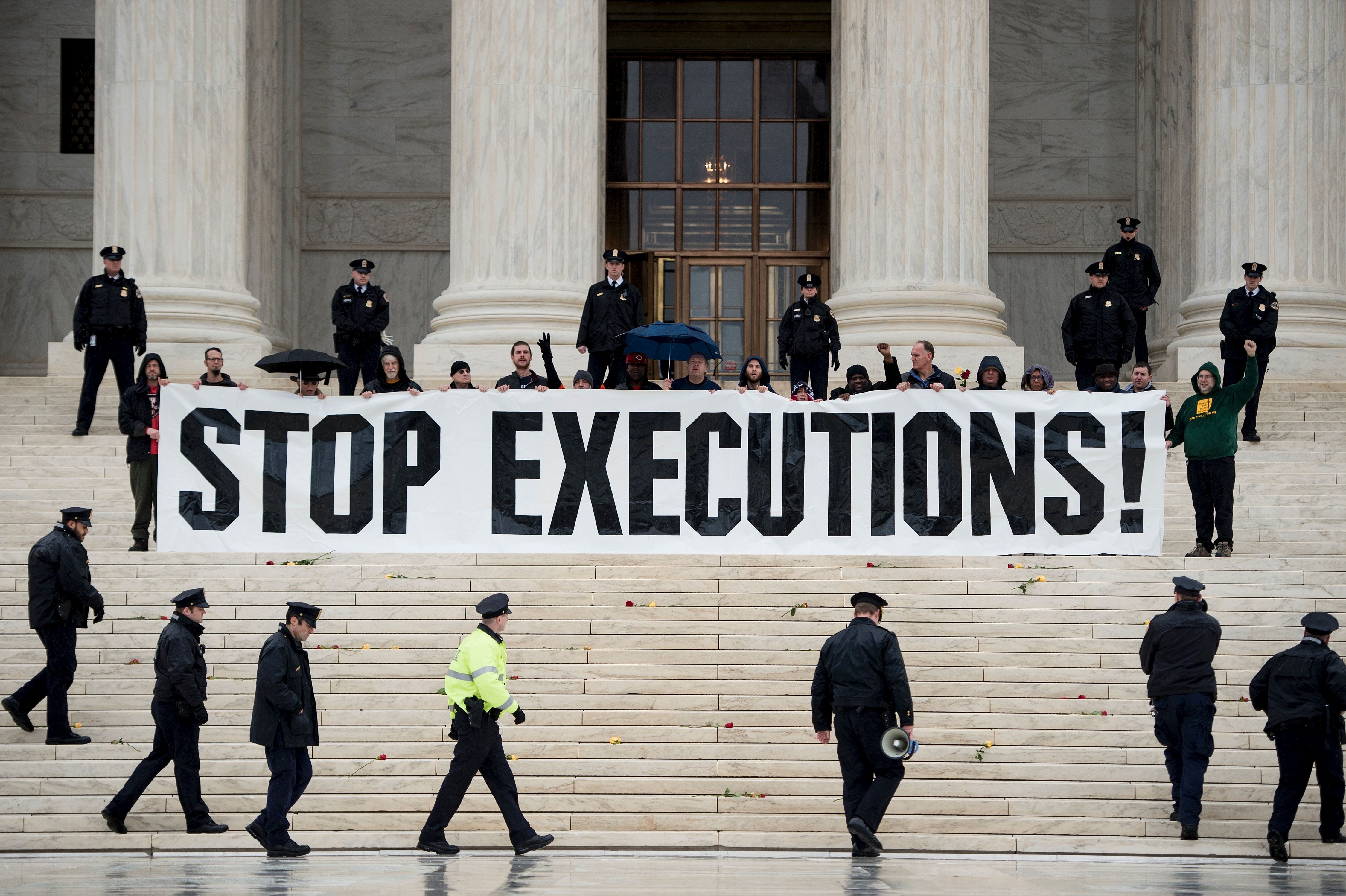 BRENDAN SMIALOWSKI/AFP via Getty ImagesPolice officers gather to remove activists during an anti death penalty protest in front of the US Supreme Court January 17, 2017 in Washington, DC.

We are at a crucial moment in the fight to end America’s long and troubled history of using capital punishment.

President Biden is the first candidate to have been elected on an abolitionist platform, having vowed to end his predecessor’s revival of federal executions.

In March, Virginia’s lawmakers voted to end the death penalty, becoming the first Southern state to abolish it.

Support for the death penalty among Americans is at its lowest for 50 years. Arguments that the death penalty doesn’t deter crime, kills the innocent and costs American taxpayers millions have at last cut through.

Globally, the picture has also improved. In recent months, Kazakhstan and Malawi joined the more than 140 nations that have ended the death penalty in law or practice.

Amnesty International reports that last year, as the world struggled to save lives from COVID-19, executions fell by a quarter, including an 85% drop in Saudi Arabia.

The death penalty has to go. Business has a vital part to play. Traditionalists will sneer at me for saying this.

The job of CEOs, they say, is to run successful companies which create jobs and spread wealth, not to intervene in society’s moral dilemmas. But polling and events of the last year show otherwise.

What people expect from responsible business has changed. Joining this fight is a way to make good on so many commitments to be ethical.

The pandemic, mass anti-racism protests, attacks on democracy, growing inequality and the continuing destruction of our planet have recast the role of responsible business. Business leaders have spoken out on issues from de-forestation to voting laws to LGBTQ rights.

A recent survey showed that 72% of people believe that to truly lead with purpose, CEOs and companies had to be willing to take risks to address social justice issues.

A total of 49% of Americans say they assume companies that remain quiet on social justice issues just don’t care.

Bluntly, the private sector can no longer be a silent bystander in the society it inhabits. Not if it wants to promote the stability and inclusiveness on which a strong economy and successful business depend.

Despite progress, the death penalty is far from abolished. China keeps secret the number of people it executes each year, though it is believed to be in the thousands.

Even during the pandemic, a number of governments have remained determined to carry out executions, most notably Egypt, where cases have tripled.

In America, 27 states can still legally authorize executions and last year five carried them out.

This should be intolerable in a country still reeling from the brutal murder of George Floyd. The death penalty is blatantly racist.

A University of Washington study found jurors in Washington were three times more likely to recommend a death sentence for a black defendant than for a white one in a similar case. Killers of white victims are executed at a rate 17 times greater than those whose victims are black.

Backing an end to capital punishment is a means of honoring the many commitments by companies and brands that have publicly decried cruelty, discrimination and injustice.

The aim here is not simply to produce well-meaning statements. Corporate activism, when it aligns with calls for reform from civil society, can and does embolden lawmakers to braver action.

This is why I have joined a rapidly-growing global movement of CEOs and executives calling for an end to capital punishment.

As we look to recover from a pandemic-driven recession, business leaders are pushing for cost-effective justice solutions that work – not a cruel, racist, wasteful and shockingly error-prone form of punishment that fails to deliver justice by every conceivable measure.

Given the historic momentum on Capitol Hill, the question now lands at every CEO’s door: will you stand on the sidelines, or stand together with your courageous peers for a more just and humane world?

Sign the declaration. Use business as a force for good.

Paul Polman is co-founder of Imagine and former CEO of Unilever. His book, “Net Positive: How courageous companies thrive by giving more than they take” is due out in September 2021.