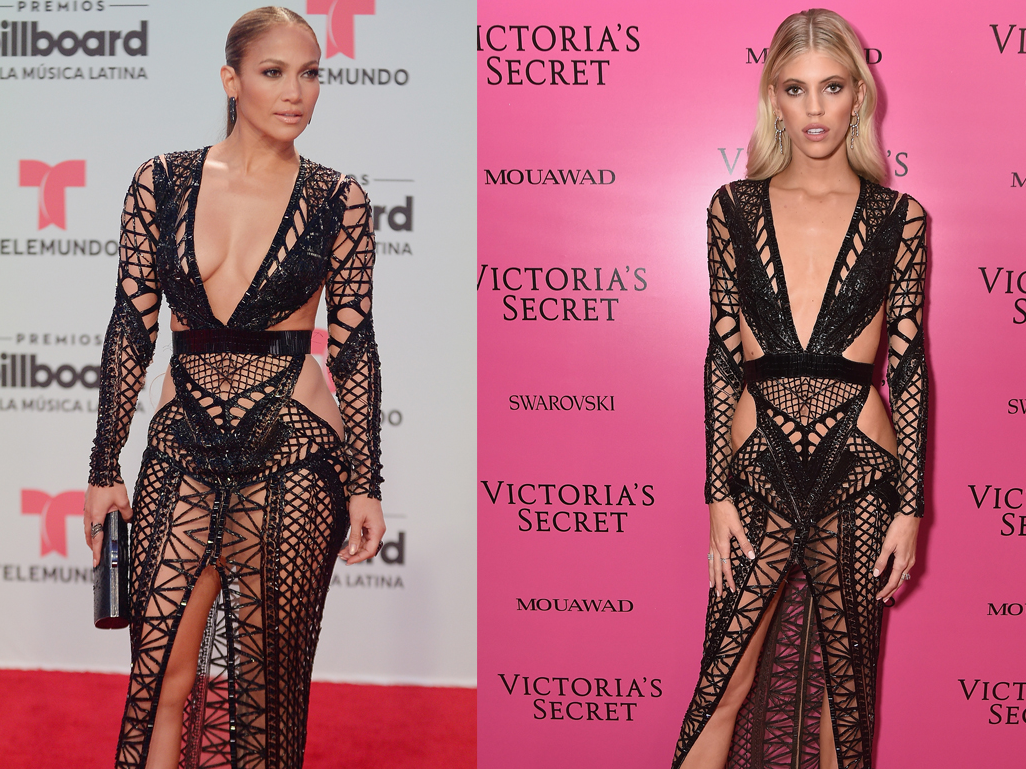 When two celebrities hit the red carpet wearing the same outfit, it doesn’t have to automatically become a game of “who wore it better.” More often than not, both people simply look amazing.

From royals like Meghan Markle and Kate Middleton to Victoria’s Secret models like Taylor Hill and Georgia Fowler, keep scrolling to see the different ways celebrities have styled identical outfits.

Susanna Heller contributed reporting on a previous version of this article.

Both Jamie Lee Curtis and Timothée Chalamet know the power of a monochromatic suit. 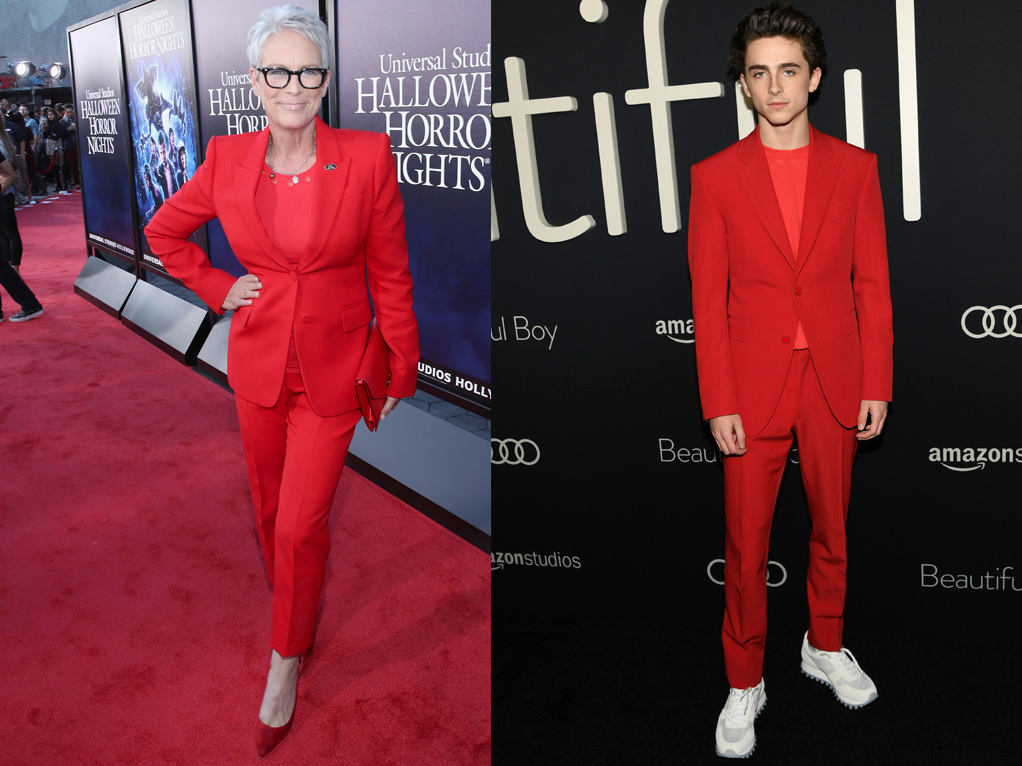 Curtis wore the all-red ensemble with a pair of matching heels on September 14 to the Halloween Horror Nights 2018 at Universal Studios Hollywood in Los Angeles, California.

Chalamet sported a modern, relaxed interpretation of the outfit for the October 8 premiere of “Beautiful Boy” in Beverly Hills, California, styling the garment with white sneakers. 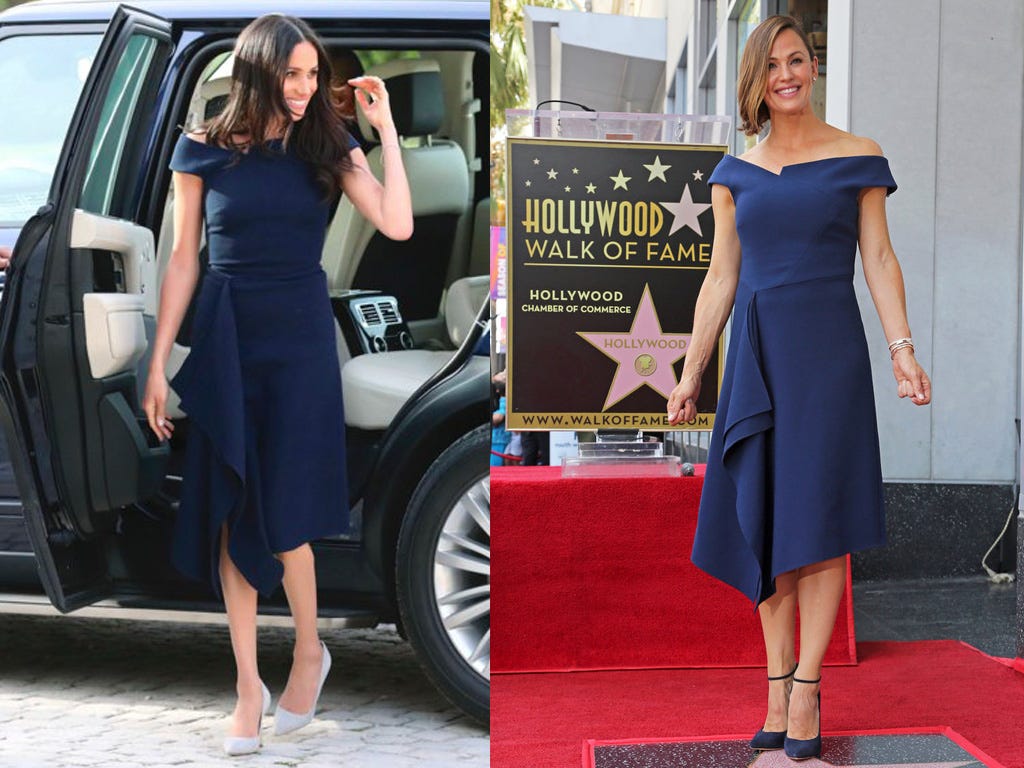 Markle wore the Roland Mouret midi dress first on the night before her May 19 royal wedding. She completed her outfit with a pair of icy blue heels and loose curls.

Later, on August 20, Garner channeled the Duchess of Sussex when she received a star on the Hollywood Walk of Fame. She topped off her look with a partial updo, strappy shoes, and minimal accessories. 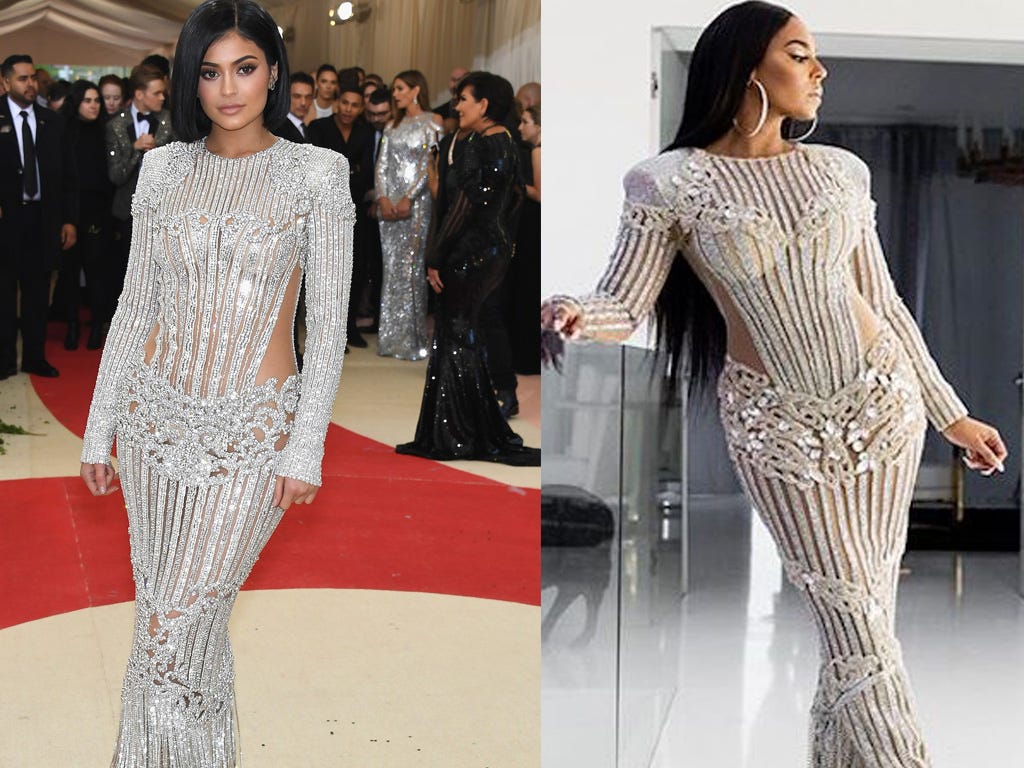 In March 2018, Ashanti posted several pictures of herself wearing the dress on Instagram. Like Jenner, she wore her hair straight and down, but she styled the dress with large hoop earrings. 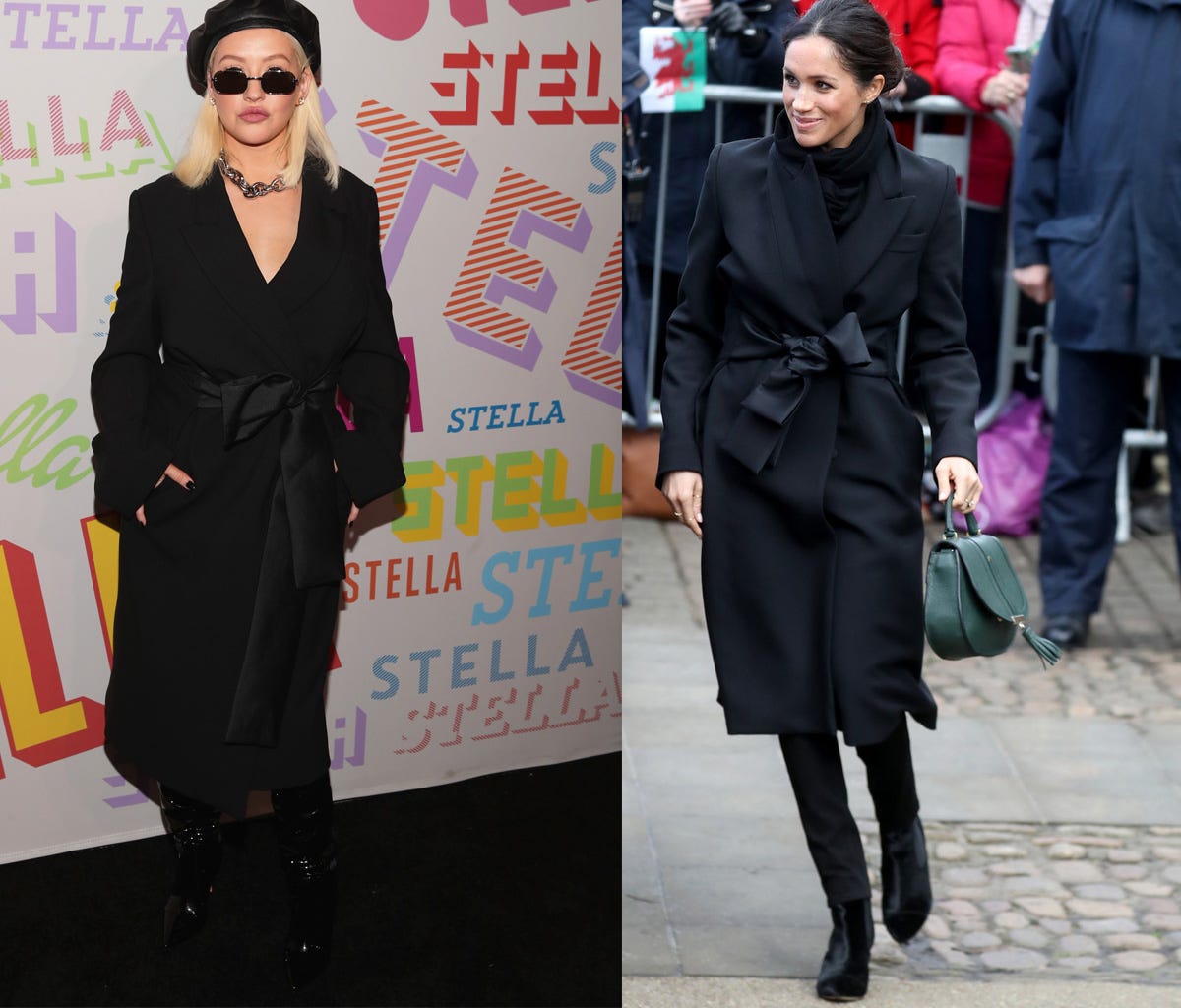 Aguilera wore the Stella McCartney coat – from the designer’s fall 2018 collection launch in Los Angeles, California – on January 16. She paired the coat with shiny boots, Kanye West-approved miniature sunglasses, and a throwback hat.

Later that week, Markle went for a more understated look when she wore the coat with a casual bun and mismatched earrings on a royal trip to Cardiff, Wales, on January 18. 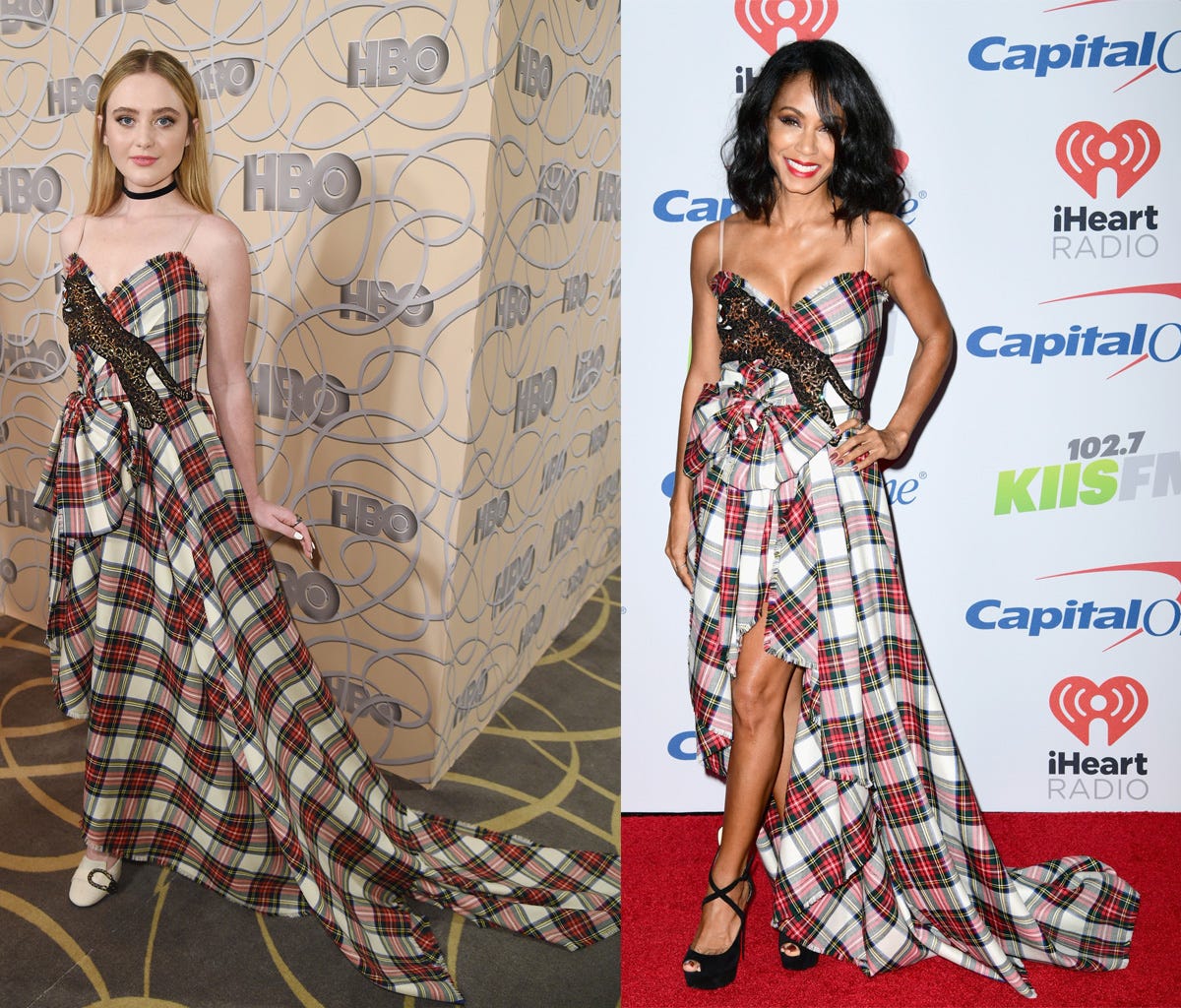 Newton emphasised the punk vibe of this dress with lots of eyeliner and a thick choker necklace for a Golden Globe Awards after-party in Beverly Hills, California, in January 2017.

Nearly a year later, in December 2017, Smith attended the Jingle Ball in Inglewood, California, and glammed up the dress with big curls and bright pink lipstick. 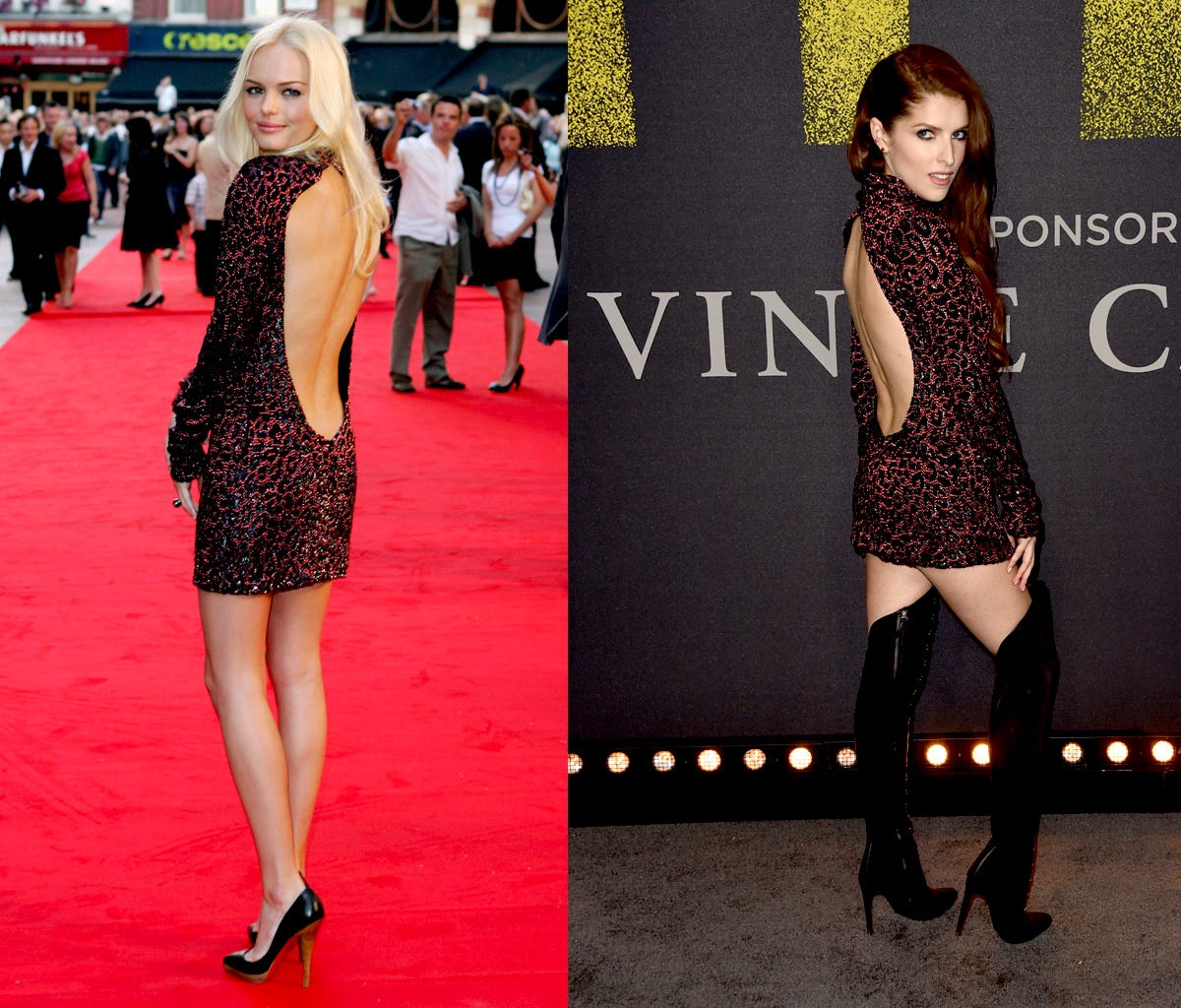 Bosworth first wore the dress with a pair of pumps to the London, UK, premiere of “Superman Returns” in July 2006.

Over a decade later, in December 2017, Kendrick paired the dress with thigh-high boots for the premiere of “Pitch Perfect 3” in Hollywood, California. 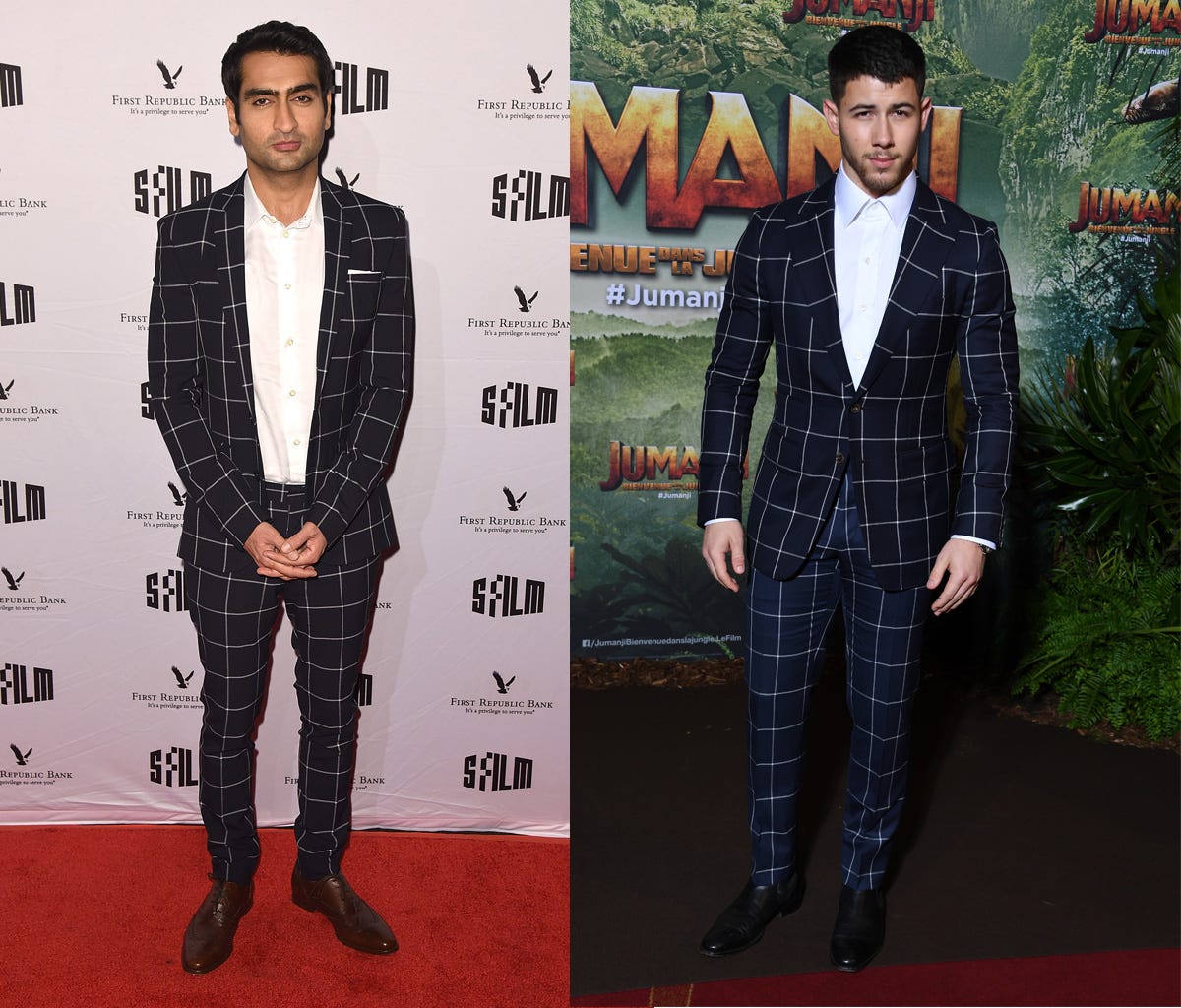 Nanjiani wore the quirky suit to SFFILM’s 60th Anniversary Awards Night on December 5, 2017, in San Francisco, California. He left his jacket unbuttoned and paired the suit with brown shoes.

On the same night, all the way across the world, Jonas wore the same suit buttoned up with black shoes to the premiere of “Jumanji: Welcome to the Jungle” in Paris, France. 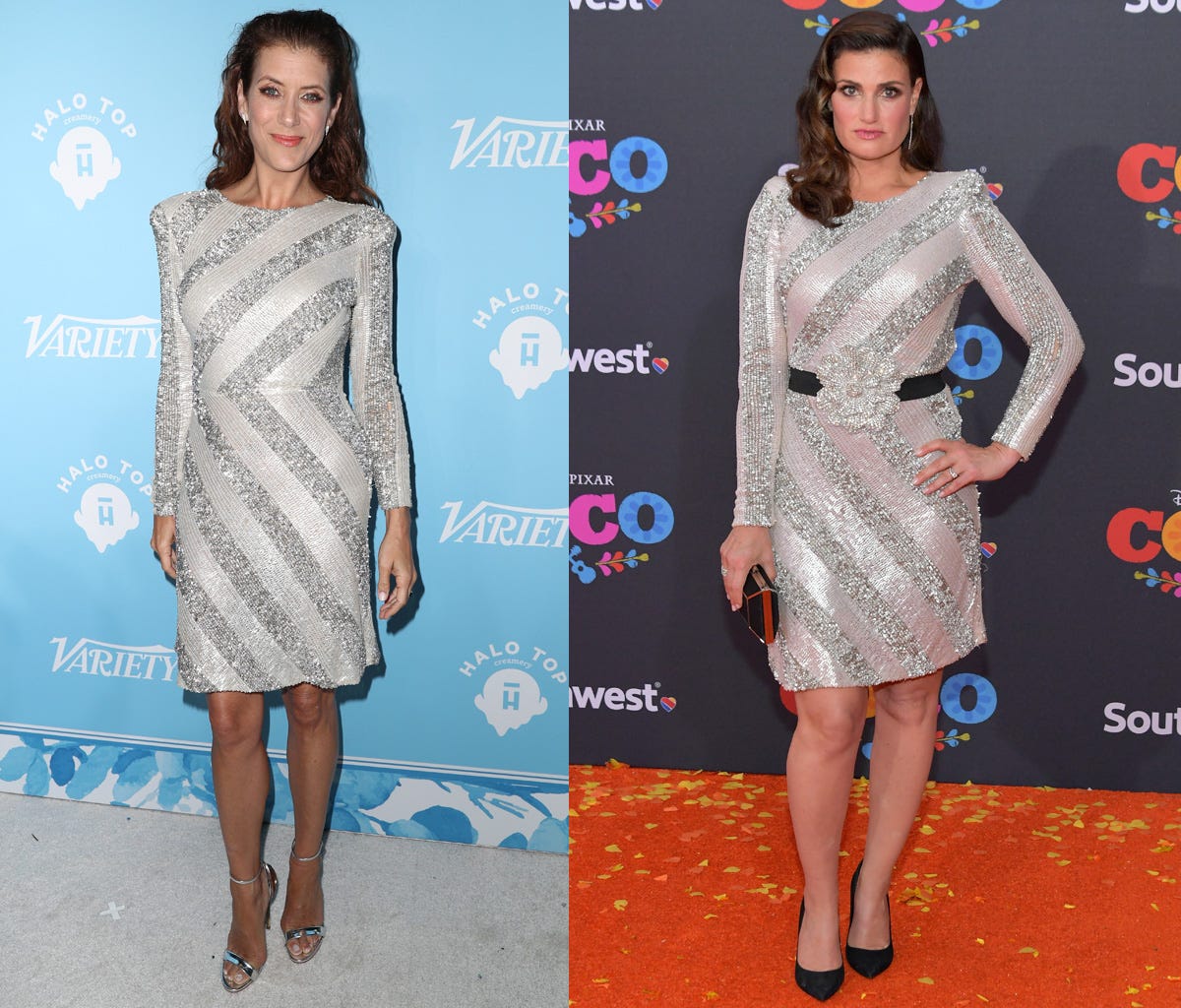 In September 2017, the “Grey’s Anatomy” star wore the glitzy dress with a pair of metallic sandals to a pre-Emmy celebration in West Hollywood, California

Later, in November 2017, Menzel paired the dress with a sparkly, flower-shaped belt and black heels for the premiere of “Coco” in Los Angeles, California.

Jennifer Lopez and Devon Windsor both rocked this daring look. 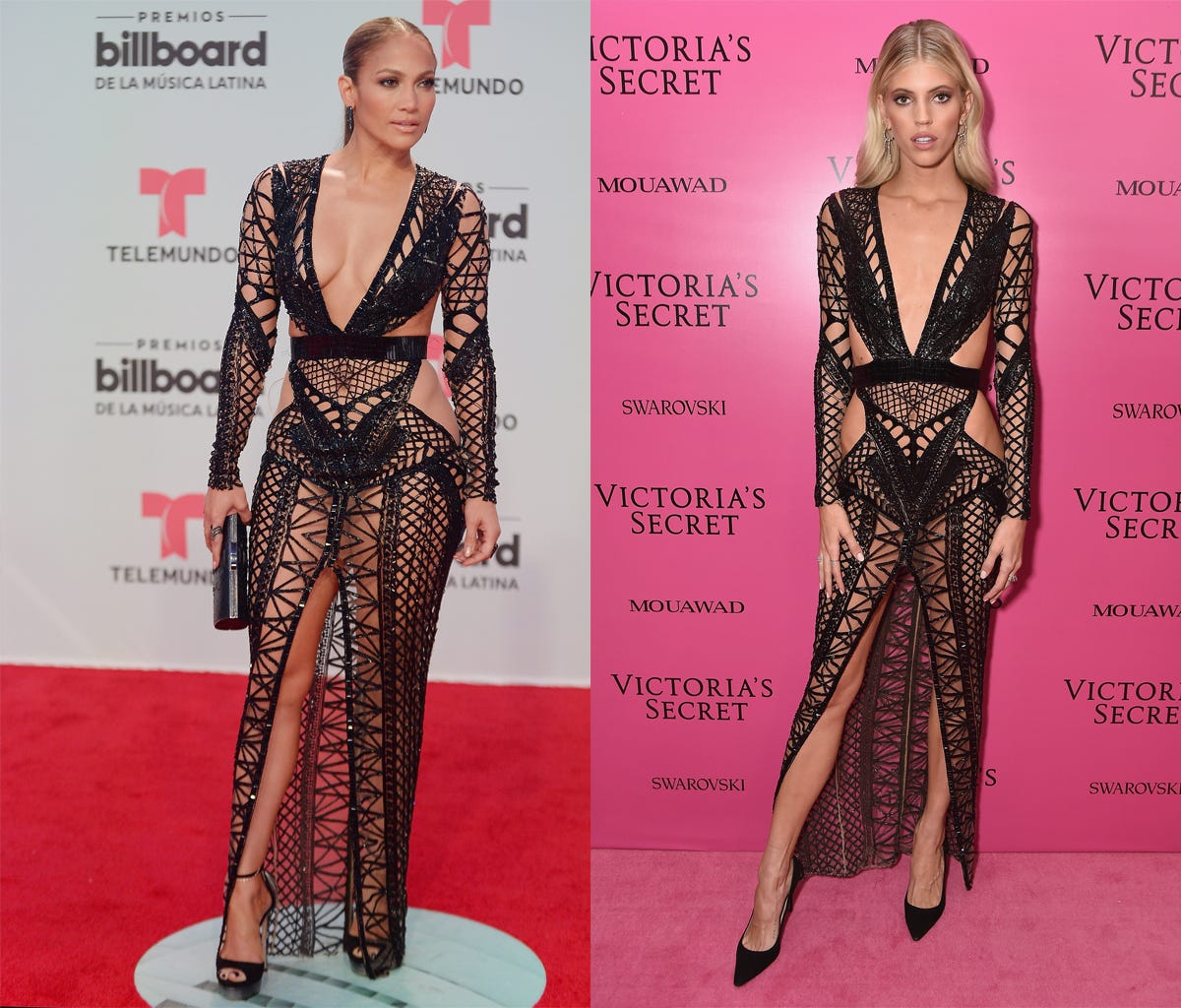 In April 2017, Lopez wore the cutout dress to the Billboard Latin Music Awards at Watsco Centre in Miami, Florida.

Then, in November 2017, Windsor sported the same garment at the Victoria’s Secret Fashion Show after-party in Shanghai, China 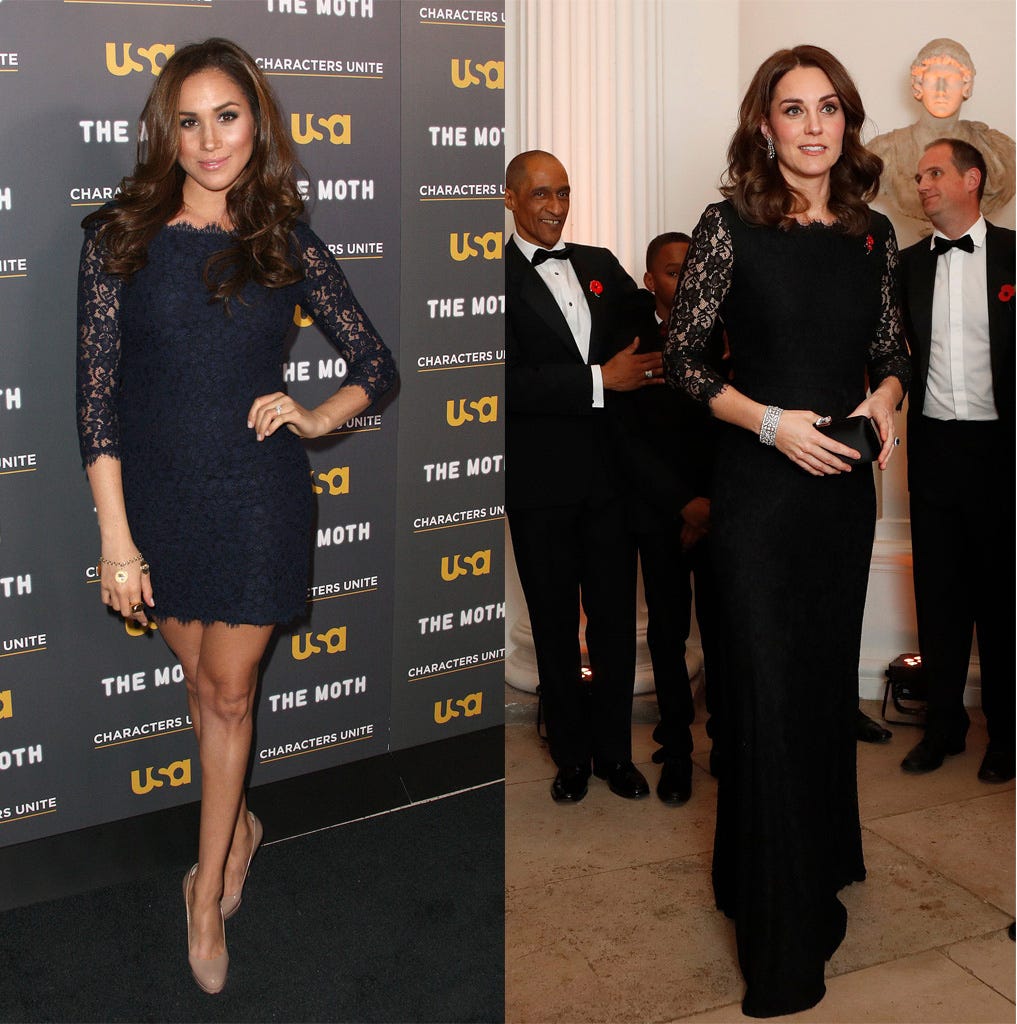 The internet freaked out when it discovered that the soon-to-be sisters-in-law wore the same Diane von Furstenberg dress five years apart.

Markle first wore a shorter, navy version of the design to a USA Network Event in Los Angeles, California, February 2012. Years later, in November 2017, Middleton wore a long, black version of the dress to a gala in the UK. 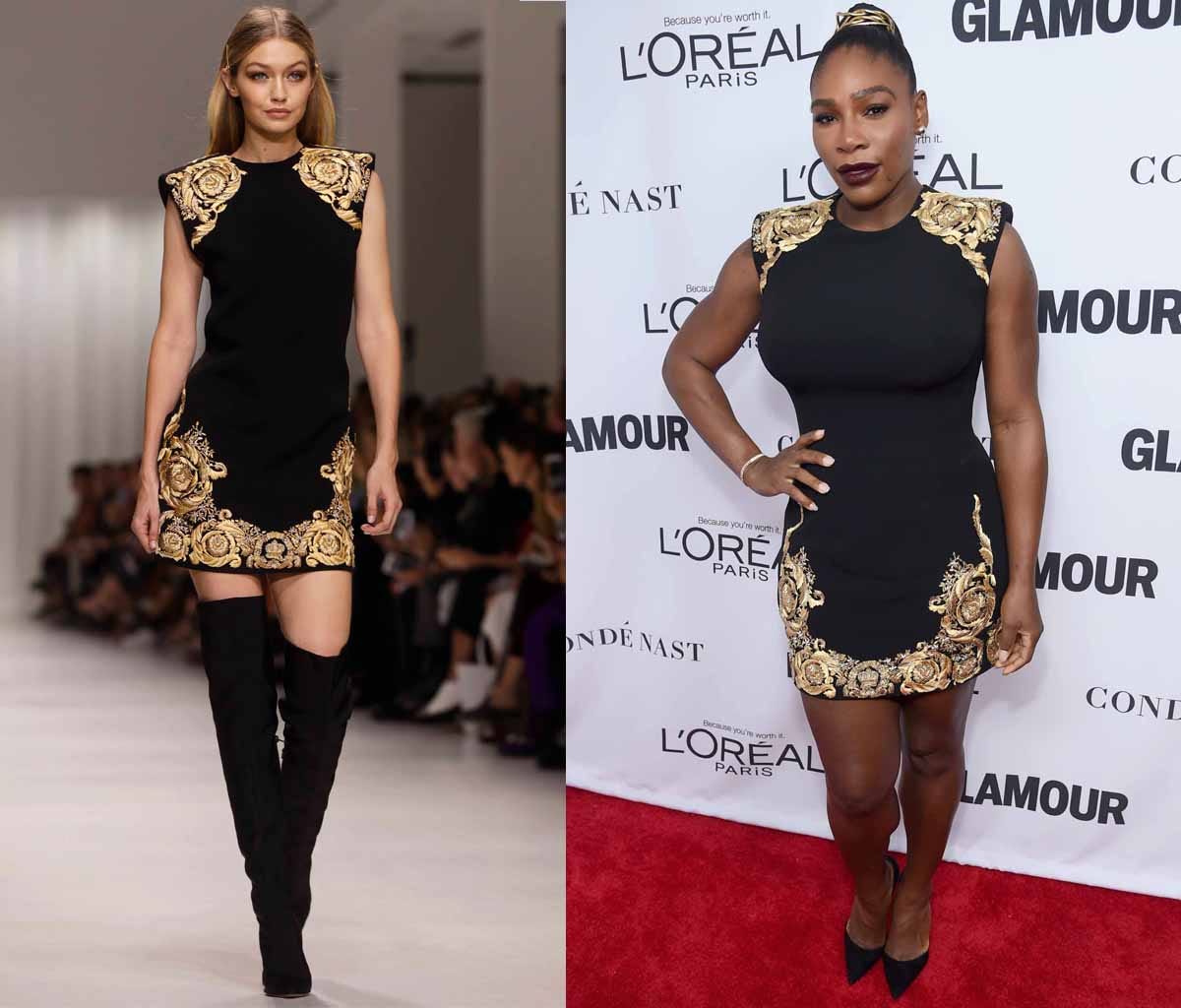 Hadid first modelled the dress on the runway in September 2017 during Milan Fashion Week. She paired it with over-the-knee boots and dark eye makeup.

In November 2017, Williams wore the dress to the Glamour Women of the Year awards, held in Brooklyn, New York. She finished her outfit with hoop earrings, pointed-toe heels, and a sleek bun.

Laura Dern and Freida Pinto thought alike when it came to this dress. 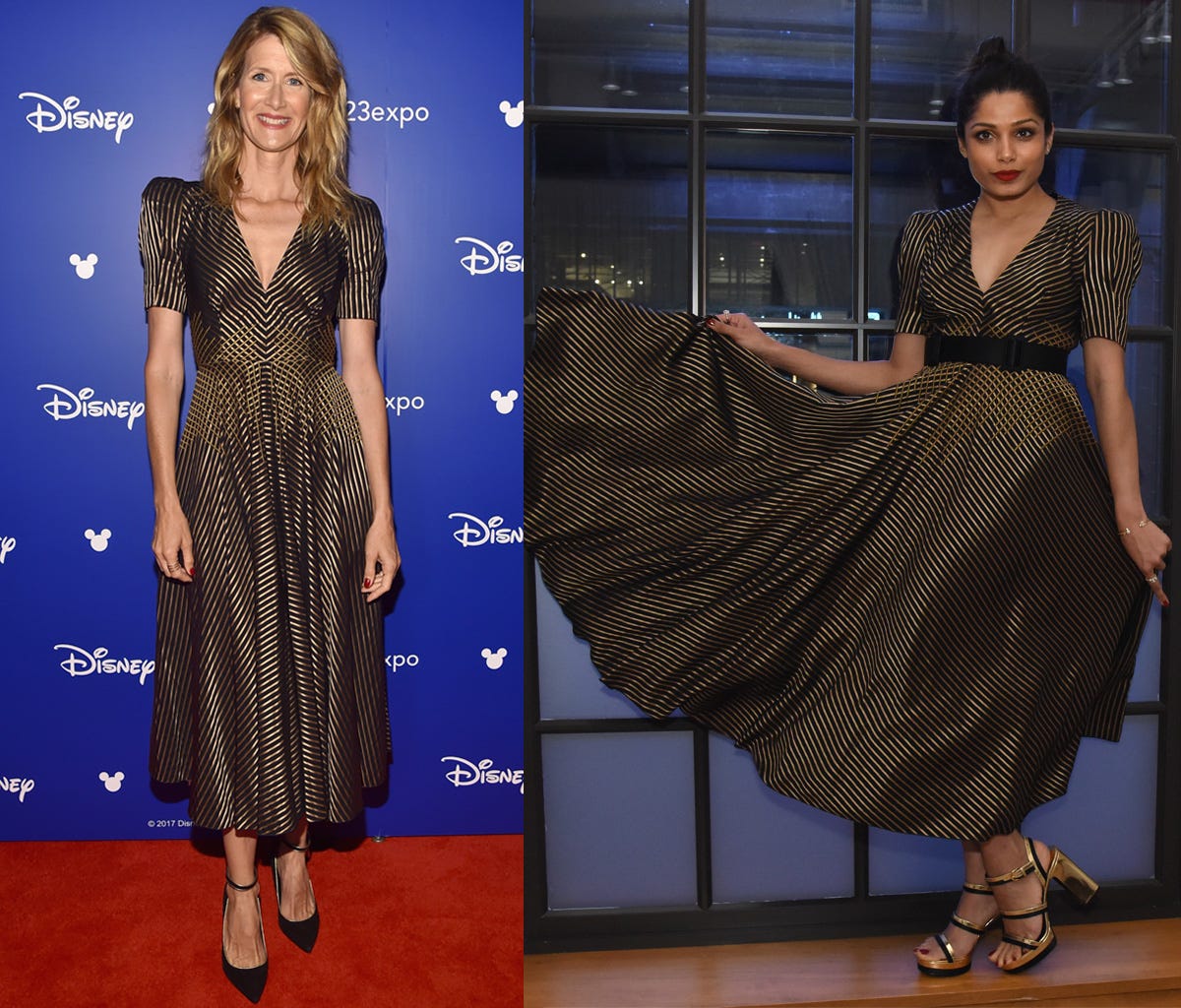 Dern wore the tea-length dress to the Disney D23 EXPO in July 2017 in Anaheim, California. The actress kept her outfit basic, completing it with simple makeup and black heels.

In November 2017, Pinto attended the Forevermark Tribute event in New York City and took her look in a different direction with chunky heels, a top knot, and a full face of makeup.

Selita Ebanks and Shay Mitchell both shined in this sparkly suit. 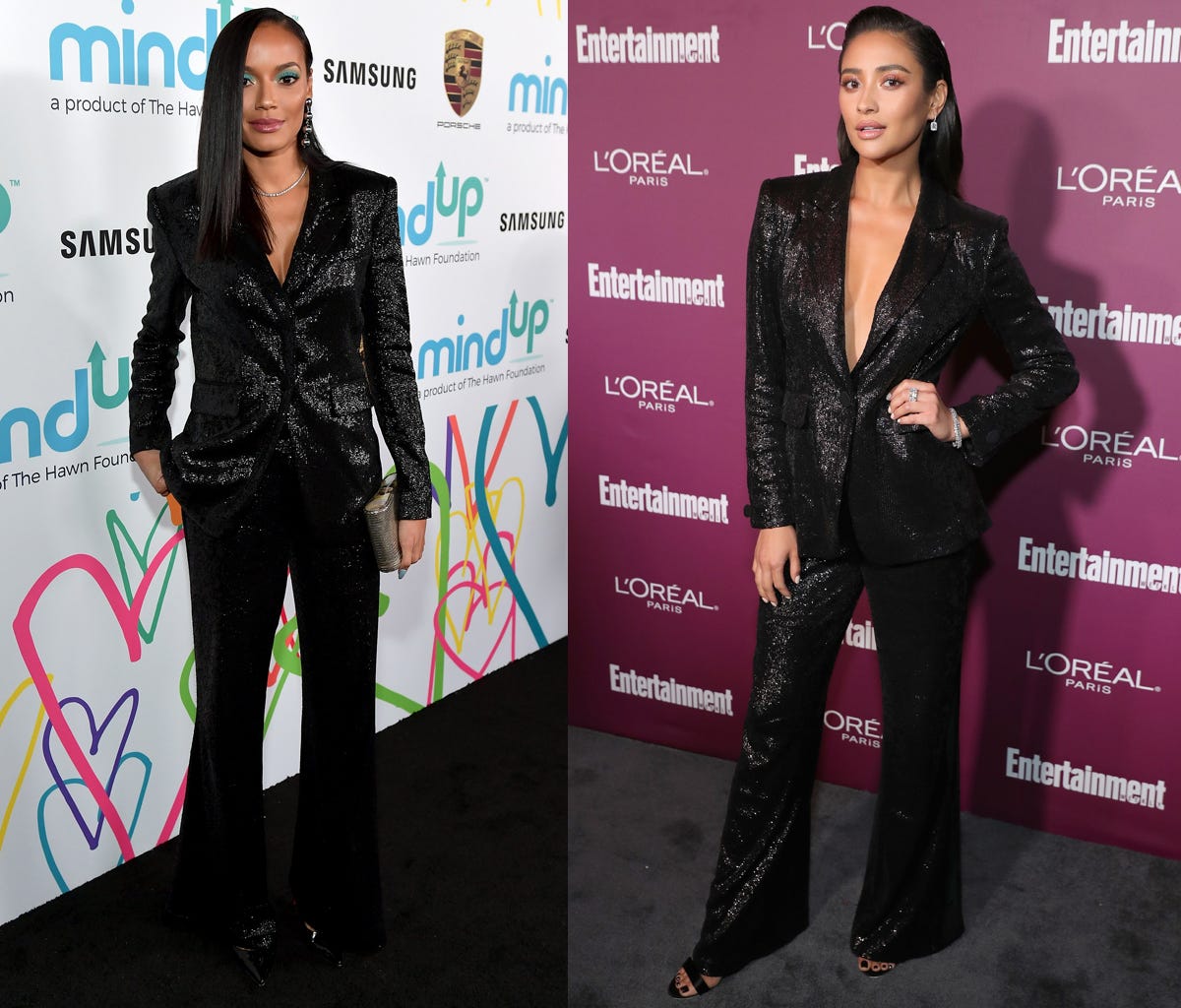 Mitchell let the suit shine on its own, completing her outfit with a skillful contour at a pre-Emmy Awards party in West Hollywood, California, in September 2017.

In November 2017, Ebanks added a pop of colour with bright blue eye shadow when she wore the suit to Goldie’s Love In For Kids at Ron Burkle’s Green Acres Estate in Beverly Hills, California. 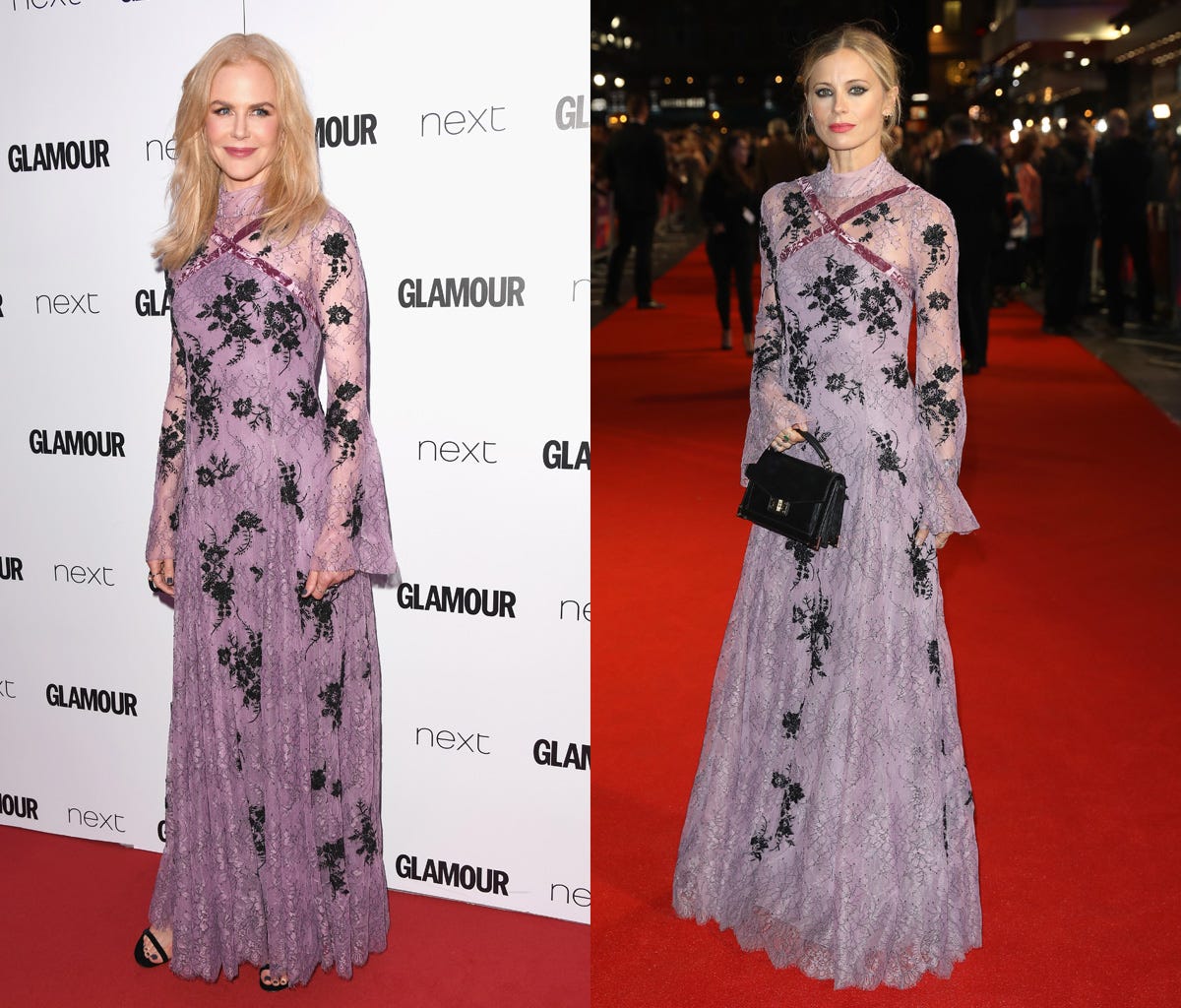 In June 2017, Kidman paired the floral dress with glam makeup and strappy sandals for the Glamour Women of the Year awards in London, UK.

But in October 2017, Bailey styled the dress differently for the London, UK, premiere of “Three Billboards Outside Ebbing, Missouri.” The actress went with a styled updo, dark eye makeup, and a small handbag.

Velvet was huge in 2017, as seen on Lily Aldridge and Josephine Skriver. 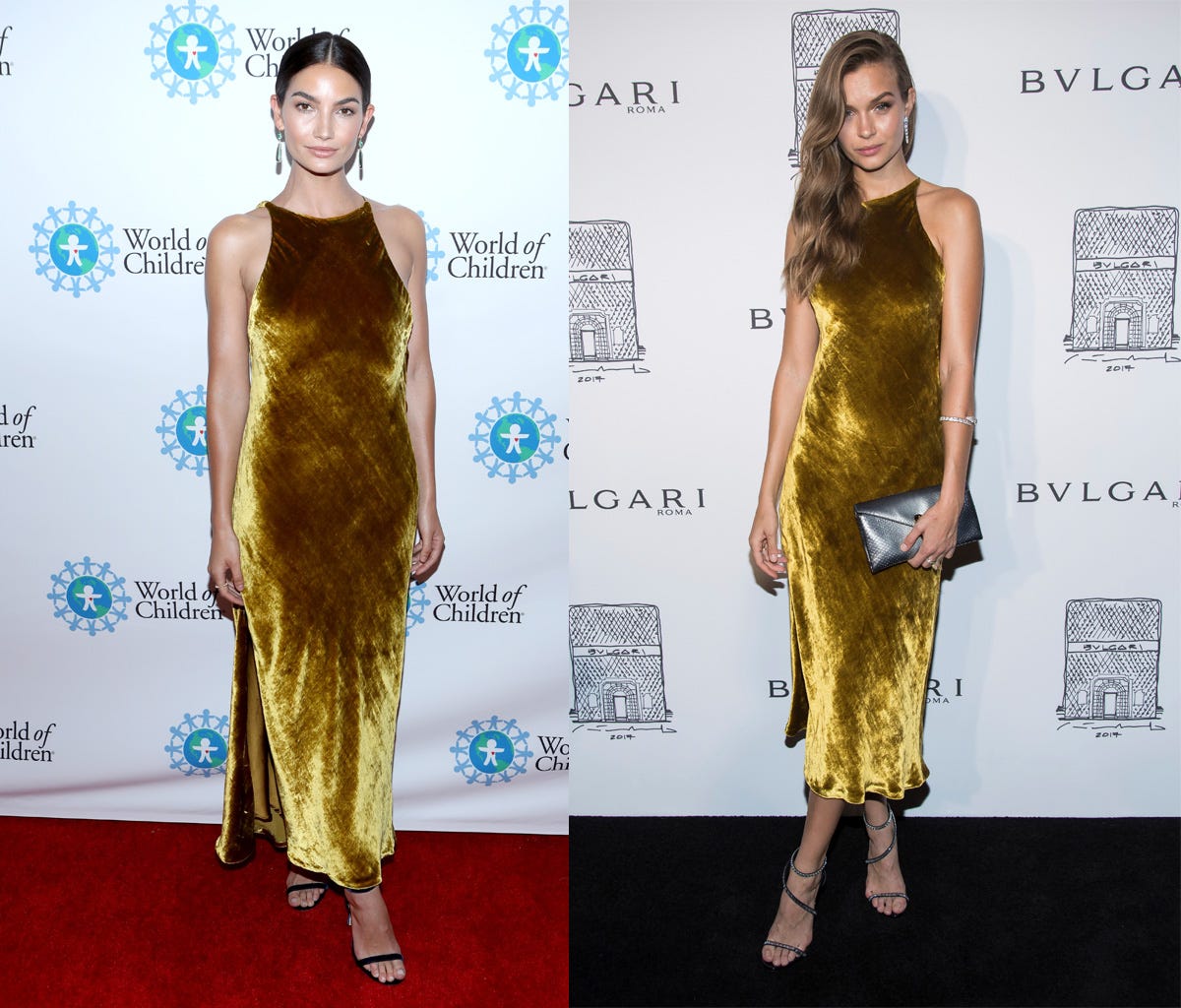 Aldridge kept her accessories minimal and made the backless slip dress the focus of her outfit when she attended the April 2017 World Of Children Hero Awards at in Beverly Hills, California.

In October 2017, Skriver amped up the dress with sparkling accessories at an event at the Bulgari Fifth Avenue flagship in New York. The model’s ensemble included jewel-encrusted shoes, diamond earrings, and a contrasting silver clutch. 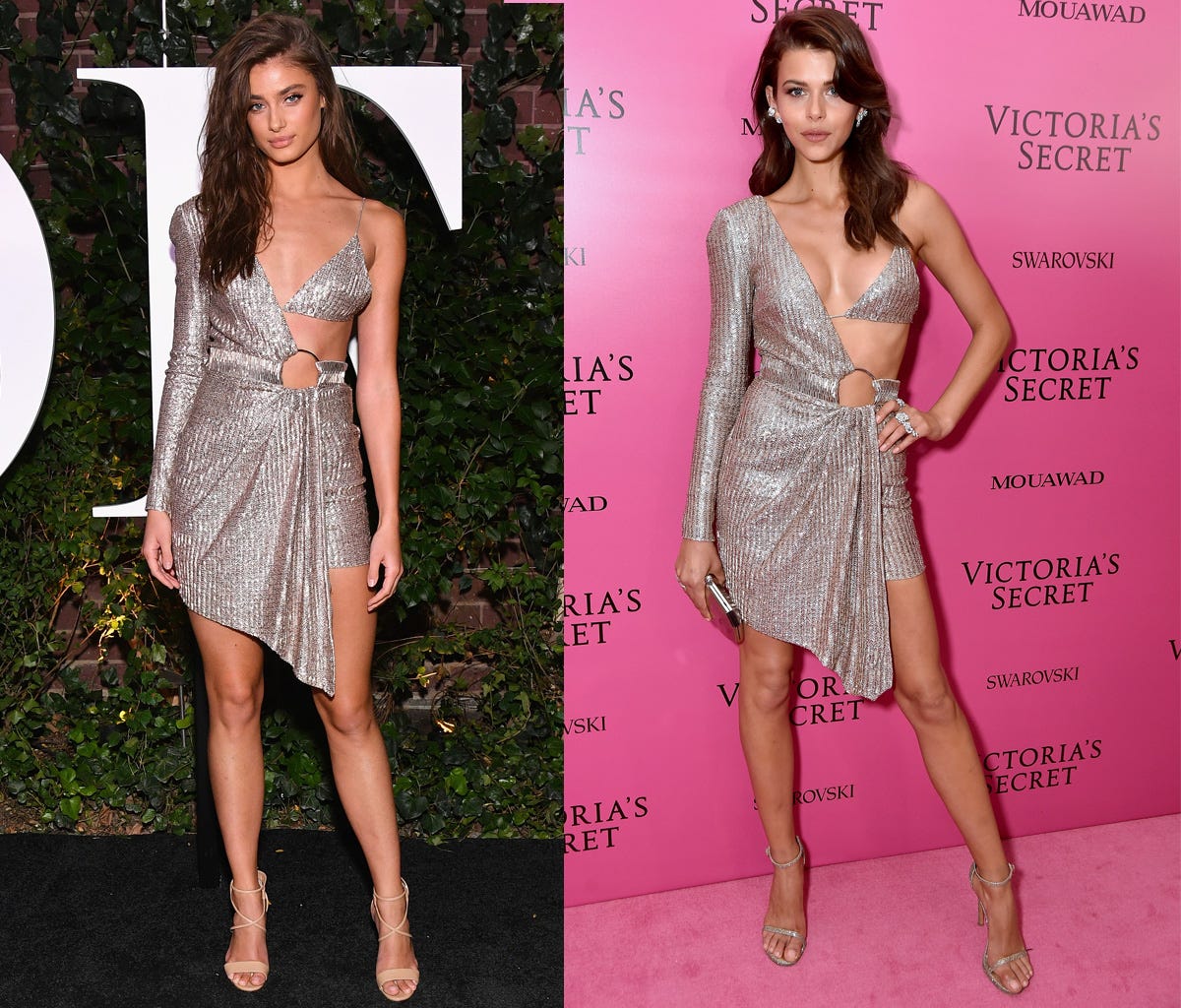 Fowler wore the asymmetrical minidress to the Business of Fashion 500 gala during New York Fashion Week in September 2017 with a pair of strappy heels.

In November 2017, Hill wore the dress the VSFS after-party in Shanghai, China. She completed her post-runway look with matching sparkly shoes. 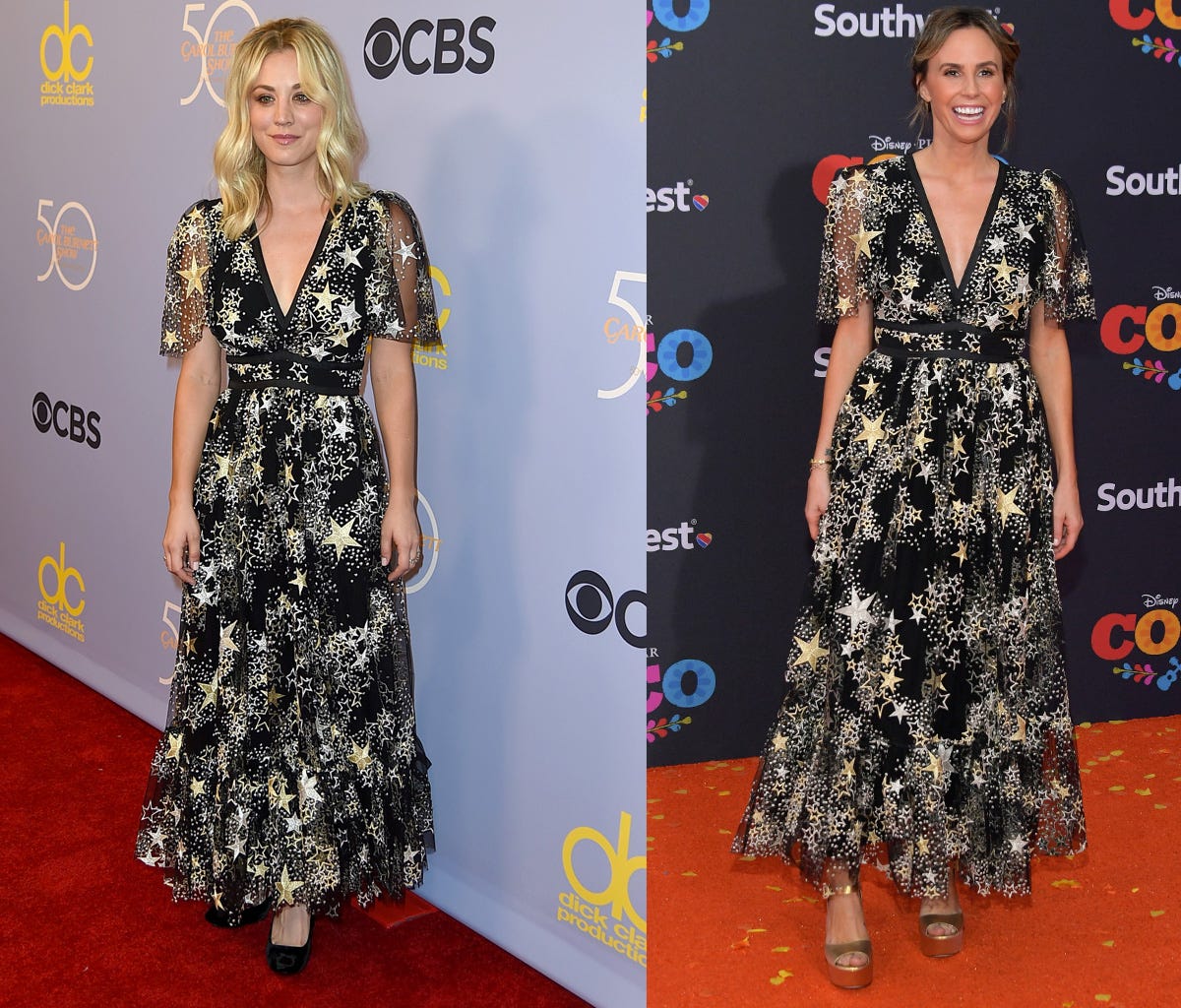 Cuoco paired the patterned dress with black pumps at the “The Carol Burnett Show 50th Anniversary Special” in October 2017 in Los Angeles, California.

A month later, Knight wore the same dress with wedges to the premiere of “Coco” in Los Angeles, California. 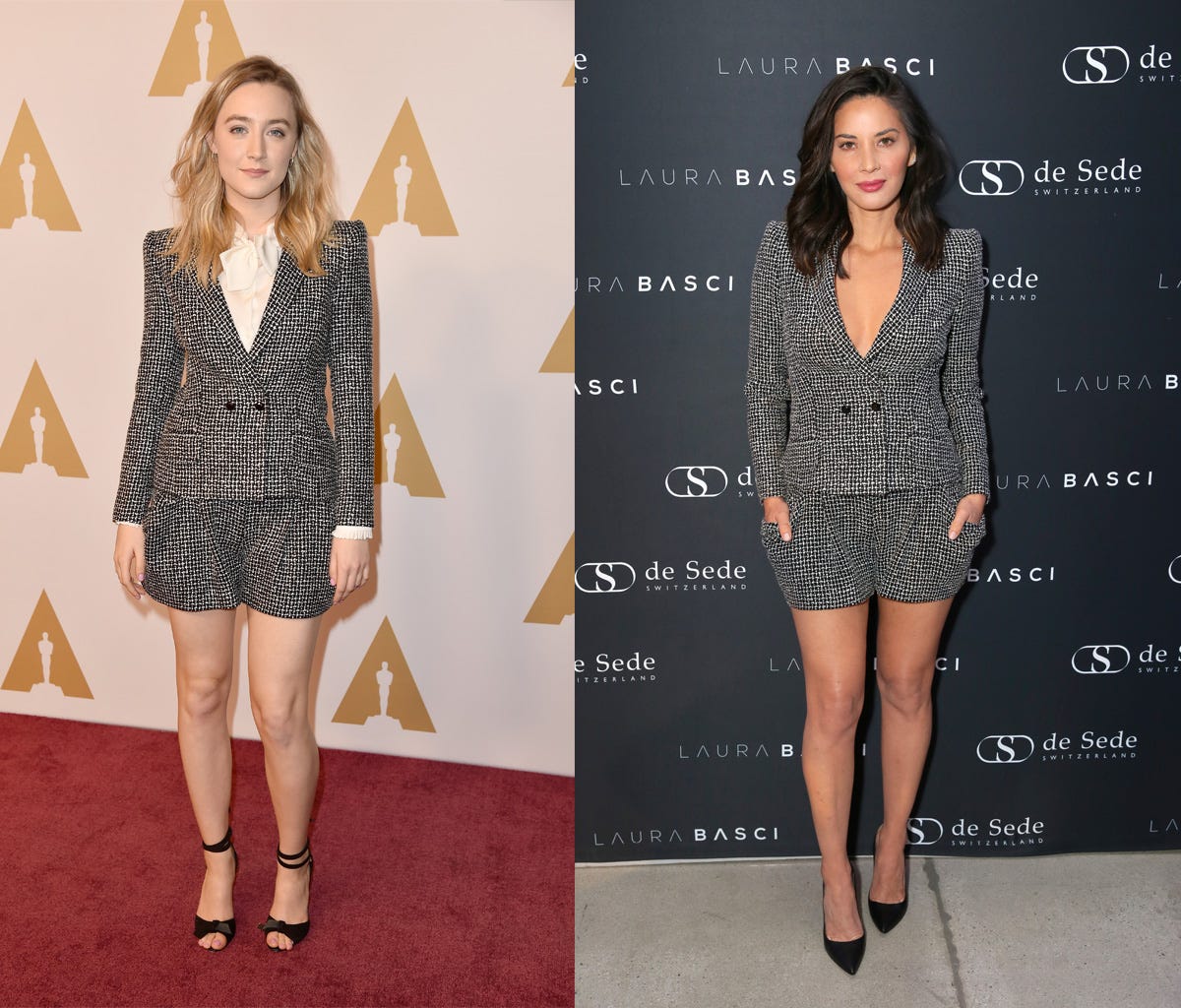 In February 2016, Ronan wore the cropped suit with peep-toe sandals and a collared shirt to the 88th Annual Academy Awards nominee luncheon in Beverly Hills, California.

Later, in September 2017, Munn wore the fitted suit with a pair of heels to the Laura Basci and de Sede Los Angeles Showroom Opening in Los Angeles, California. 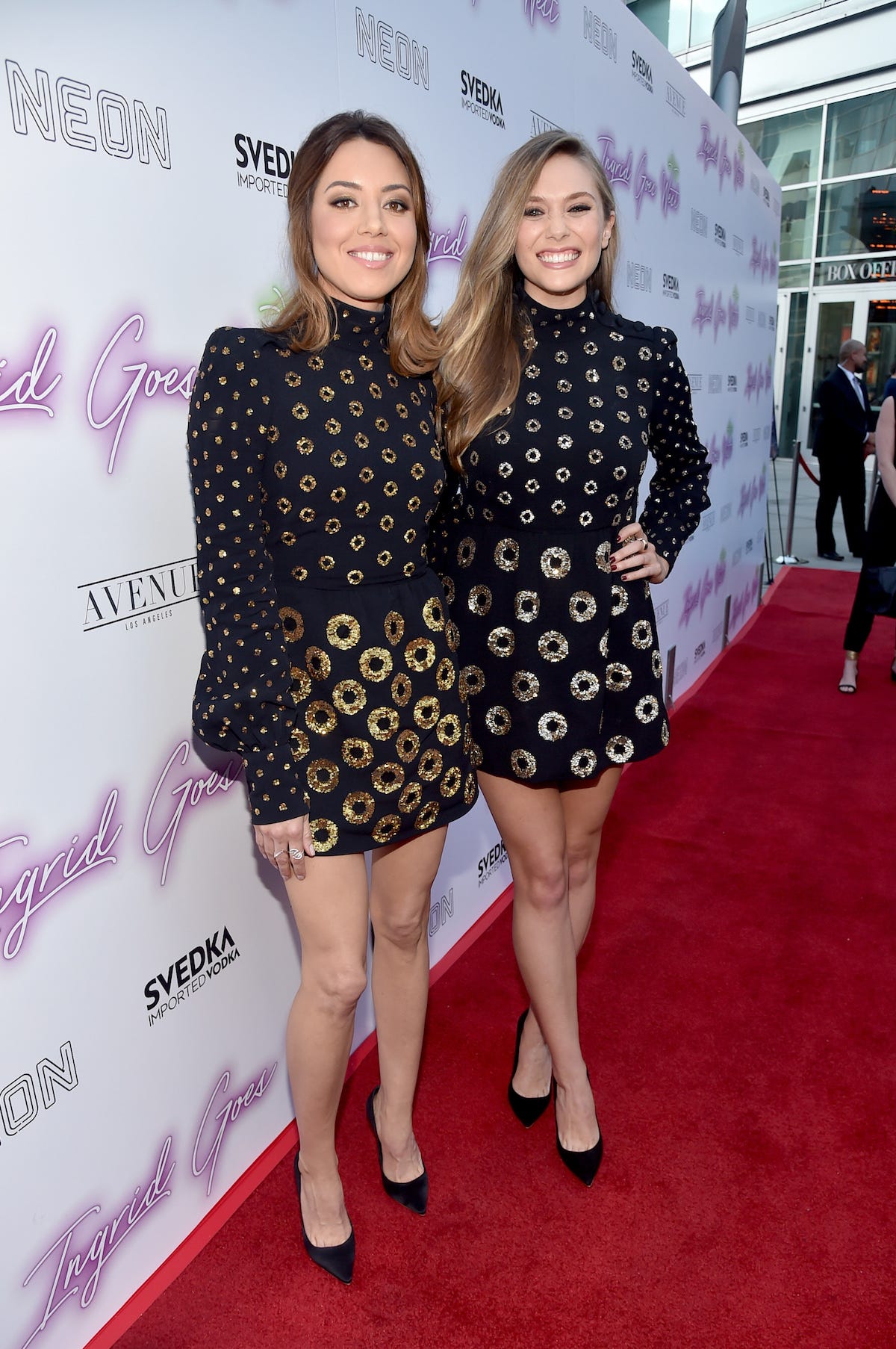 In July 2017, the actresses intended to match from head to toe for the premiere of “Ingrid Goes West” in Hollywood, California.

In 2016, Allison Williams and Adriana Lima made the same outfit choice. 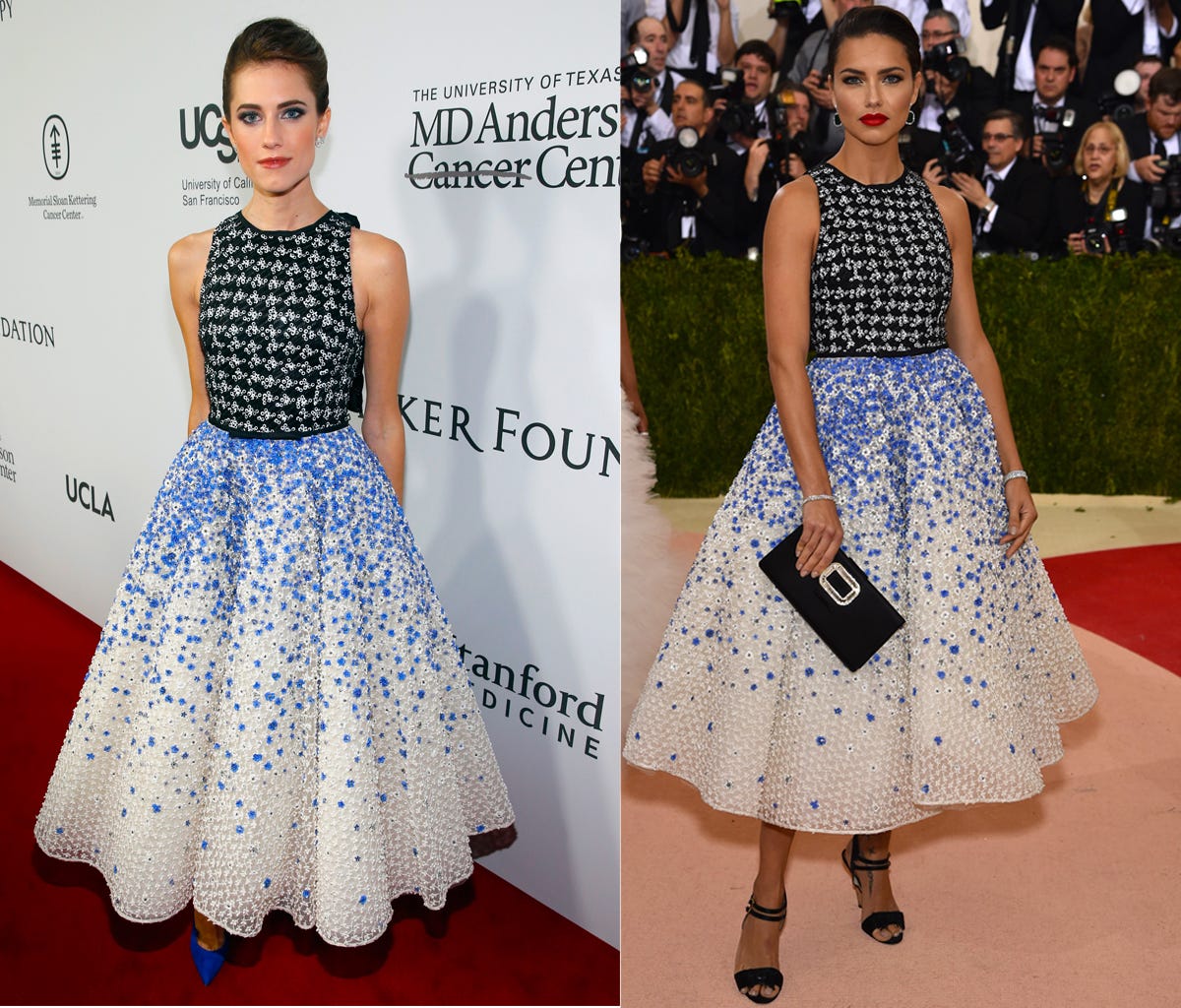 In April 2016, Williams wore the gown to the launch of the Parker Institute for Cancer Immunotherapy in Los Angeles, California. She matched her shoes and makeup to the shimmery blue details on her dress.

Then, in May 2016, Lima wore the dress with her signature red lipstick and black heels to the Met Gala in New York City. 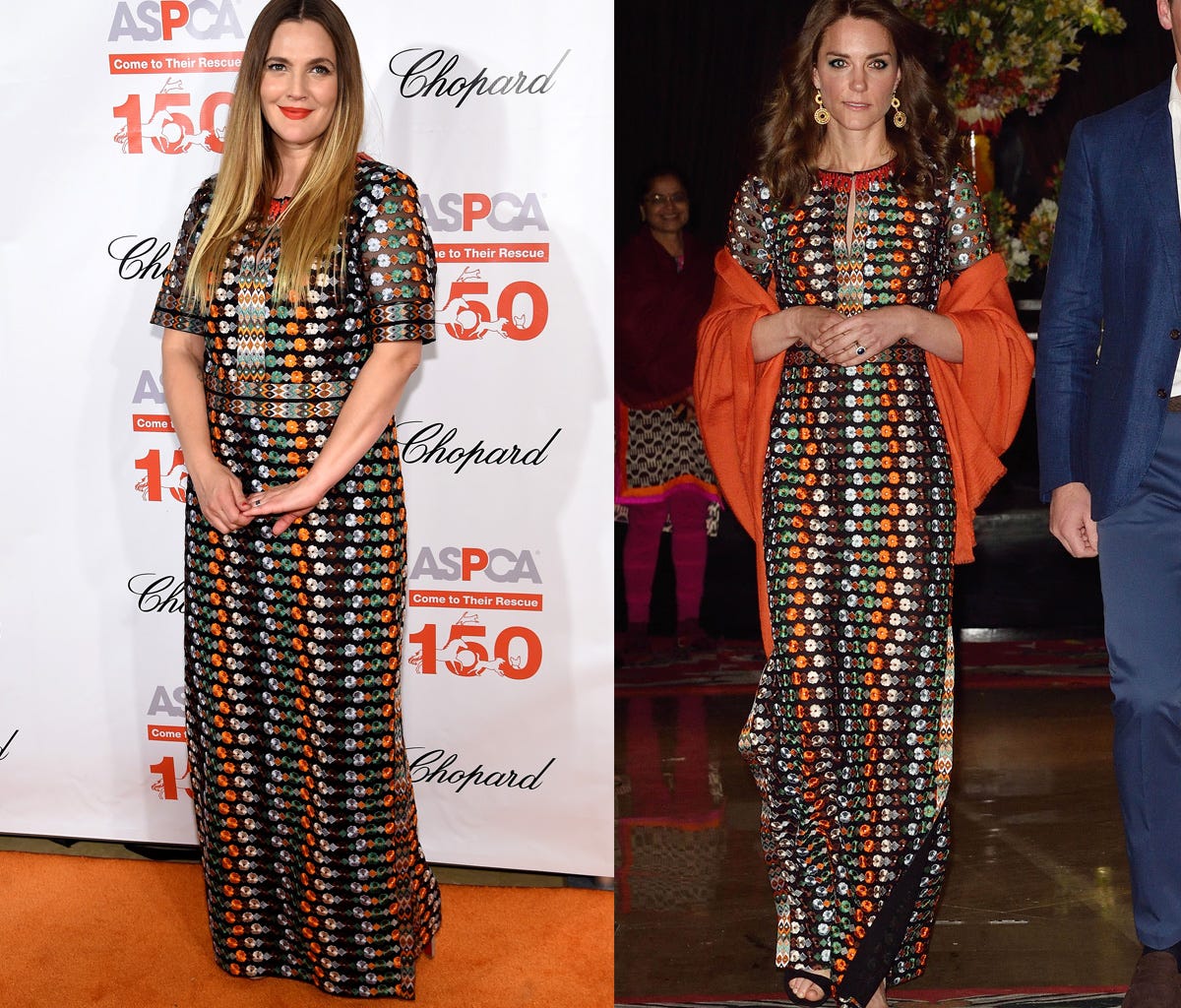 Barrymore kept her accessories minimal, allowing the dress to stand out at the ASPCA 19th Annual Bergh Ball in New York City on April 14, 2016.

The same night, thousands of miles away in Thimphu, Bhutan, Middleton wore the same gown to a dinner with the Bhutanese King and Queen. The Duchess of Cambridge made the dress more formal with large earrings, a shawl, and heeled sandals. 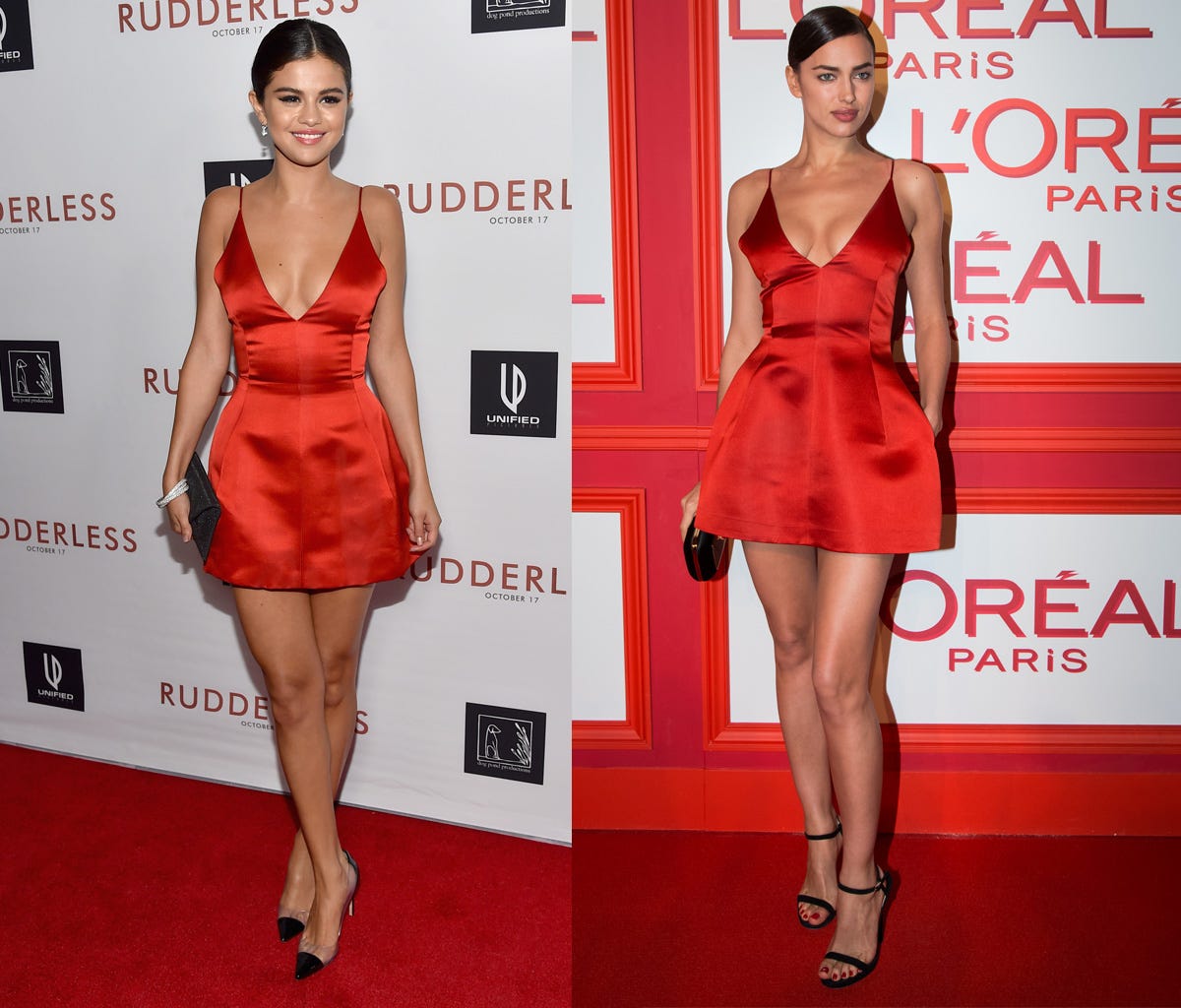 Gomez paired the dress with heels, a sleek bun, and diamond earrings for a simple yet elegant look at a screening of “Rudderless” in Los Angeles, California, in October 2014.

In March 2016, Shayk styled the dress in a nearly identical way when she attended the L’Oreal Red Obsession Party in Paris.

Zendaya and Michael B. Jordan both wore grey suits on the red carpet in 2019. Jordan wore the same suit in February 2019 while attending Vanity Fair’s Oscar party, but unlike Zendaya, he kept the grey jacket buttoned up. 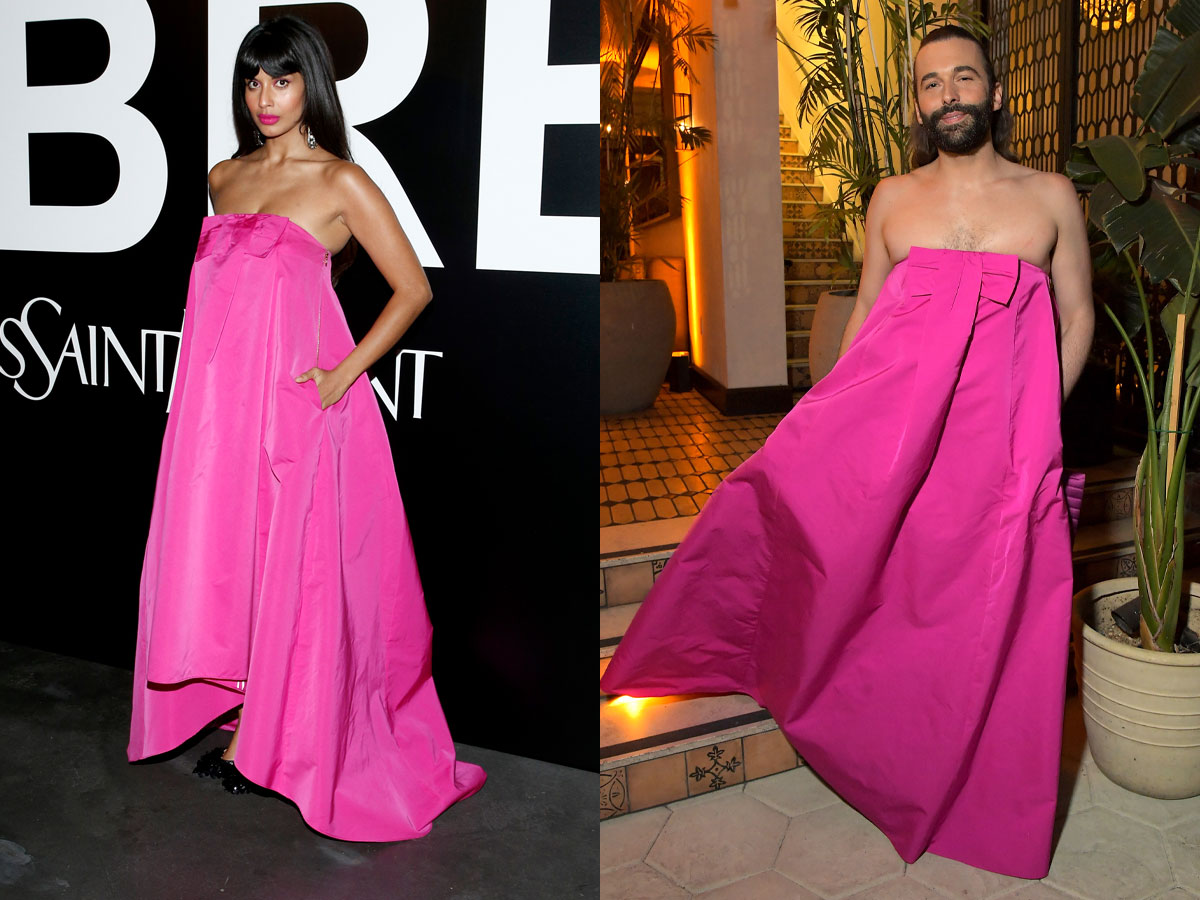 Gaga wore the Marc Jacobs suit from the designer’s spring/summer 2020 on the December 2019 cover of Elle.

After arriving at the 2020 BRIT Awards in a brown Gucci suit,Styles ended his night in the same Marc Jacobs look, minus the matching hat and Cartier earrings.

Lisa Rinna and Erika Girardi showed up to a party in identical dresses on “The Real Housewives of Beverly Hills.” 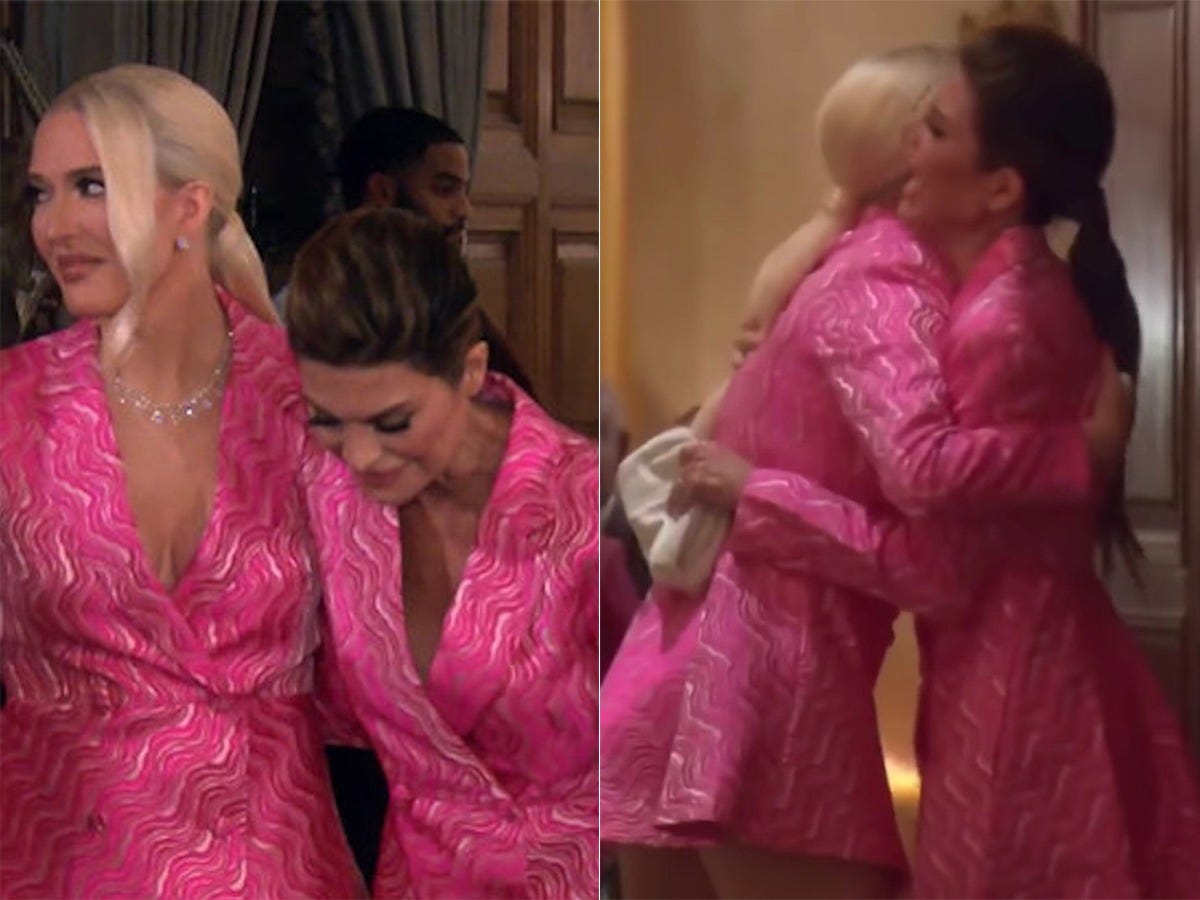 The duo both sported a pink Rotate Birger Christensen blazer dress to a dinner party on an episode of “The Real Housewives of Beverly Hills.”

Rinna and Giardi shouted out their twinning moment on Instagram, with Rinna telling her followers to tag their bestie in the shot and Giardi saying they were “seeing double.”

Kim Kardashian West and Kylie Jenner showed off the same designer top on Instagram just hours apart from each other. In June, Kardashian West shared a photo on Instagram wearing a checkered Charlotte Knowles corset top. Just a few hours later, Jenner shared how she was wearing the same top on her Instagram story.

Kardashian West went for a western vibe, wearing the top with vintage Roberto Cavalli fringe pants and $US683 Yeezy python ankle booties. Jenner, on the other hand, opted for a monochromatic look by wearing the designer top with the matching leggings.