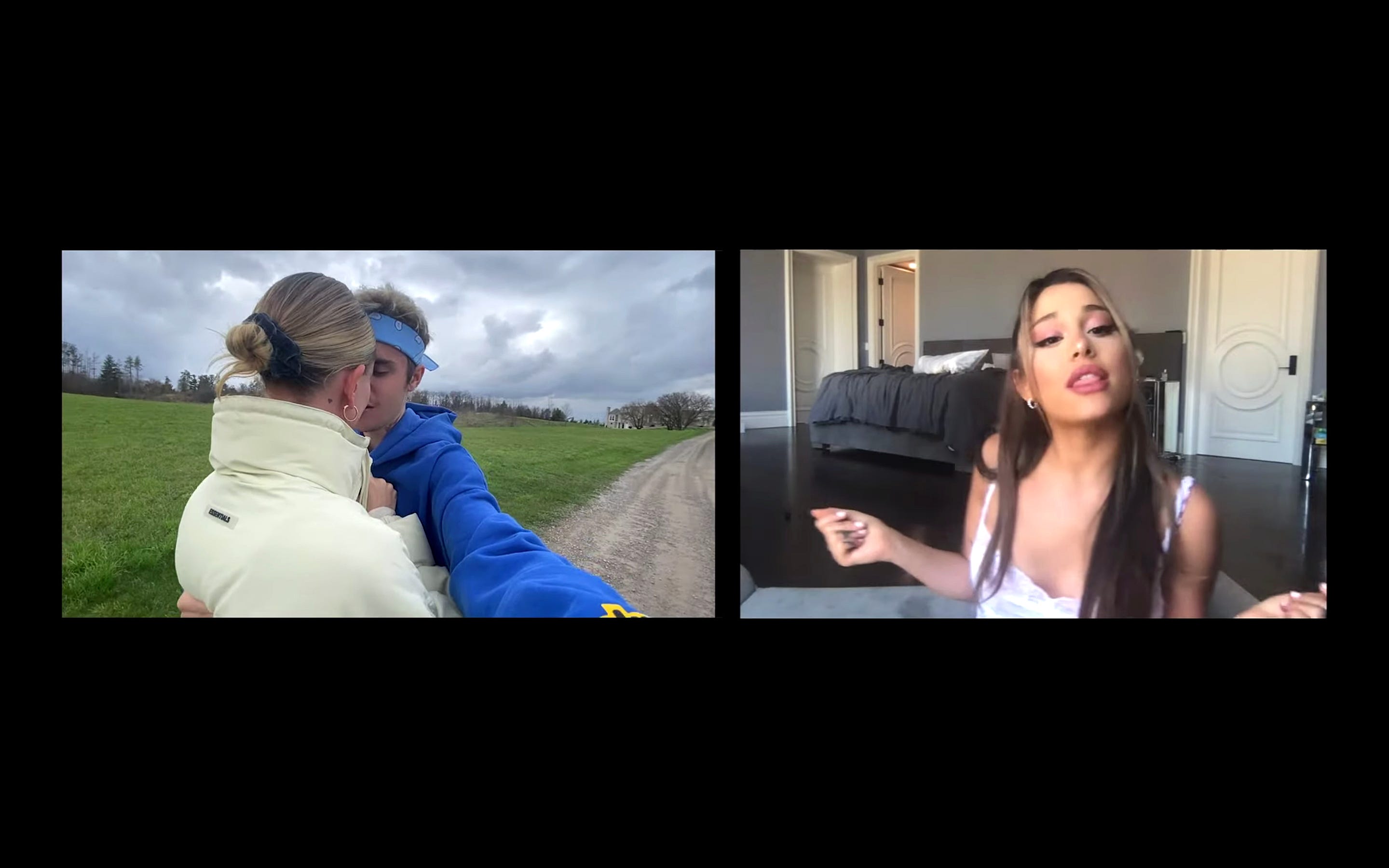 Ariana Grande/YouTubeJustin Bieber and Ariana Grande have been friends for years and share the same manager.

Ariana Grande and Justin Bieber’s new duet, “Stuck With U,” arrived on Friday with a heartwarming, star-studded music video.

Bieber, his wife Hailey, and Grande are all featured prominently in the video, which also includes a montage of fans and celebrity couples dancing to the tune.

Both stars enlisted a variety of A-list friends, from Demi Lovato to the Jenner sisters, to help promote the single, for which all net proceeds from sales and streams will be donated to the First Responder Children’s Foundation.

Watch the video here, and keep reading to see 14 cameos you may have missed.

Mila Kunis and Ashton Kutcher are the first celebrity couple that appear in the video. 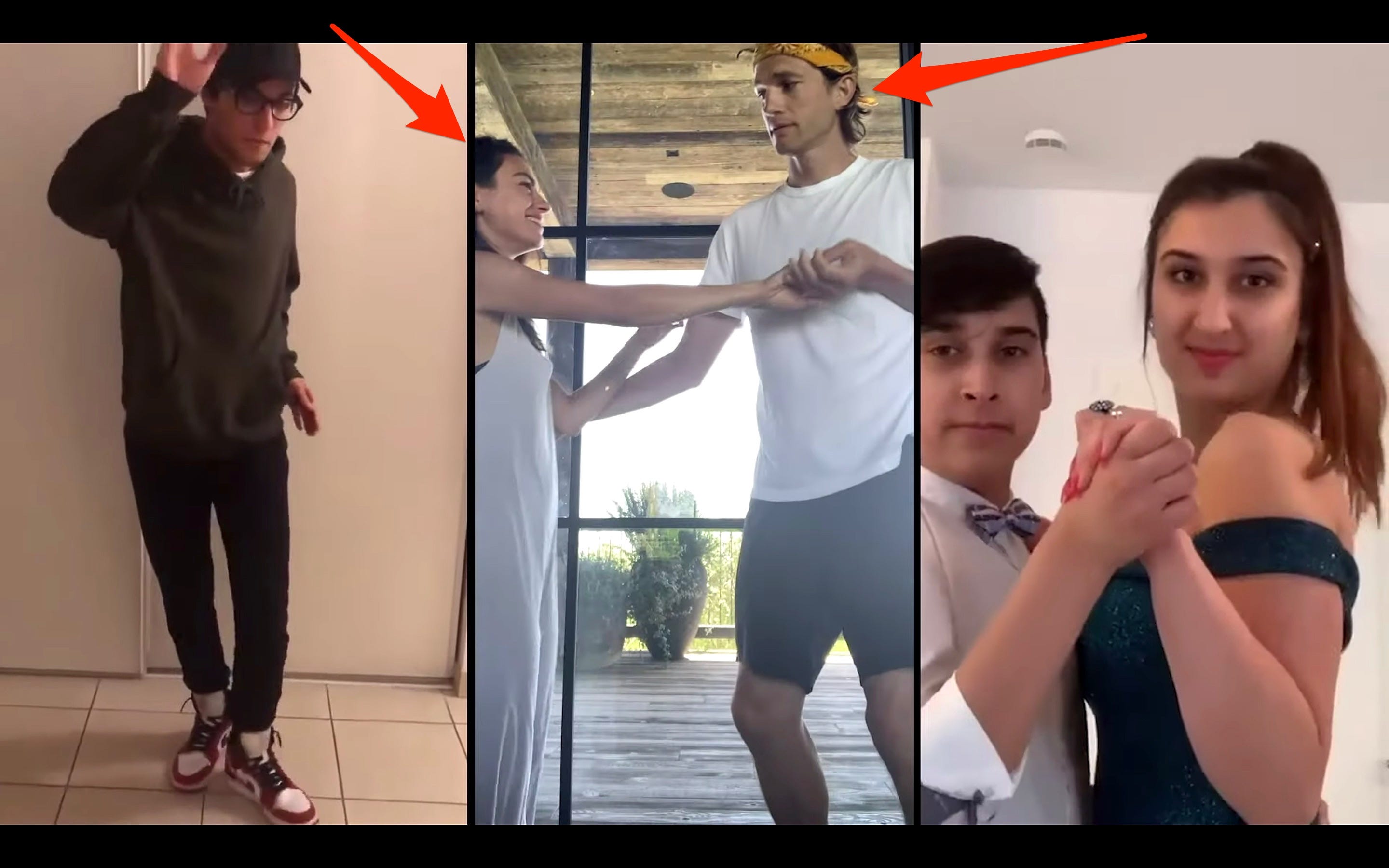 Ariana Grande/YouTubeMila Kunis and Ashton Kutcher have been married since 2015.

Michael Bublé and Eric Stonestreet appear in the same clip. 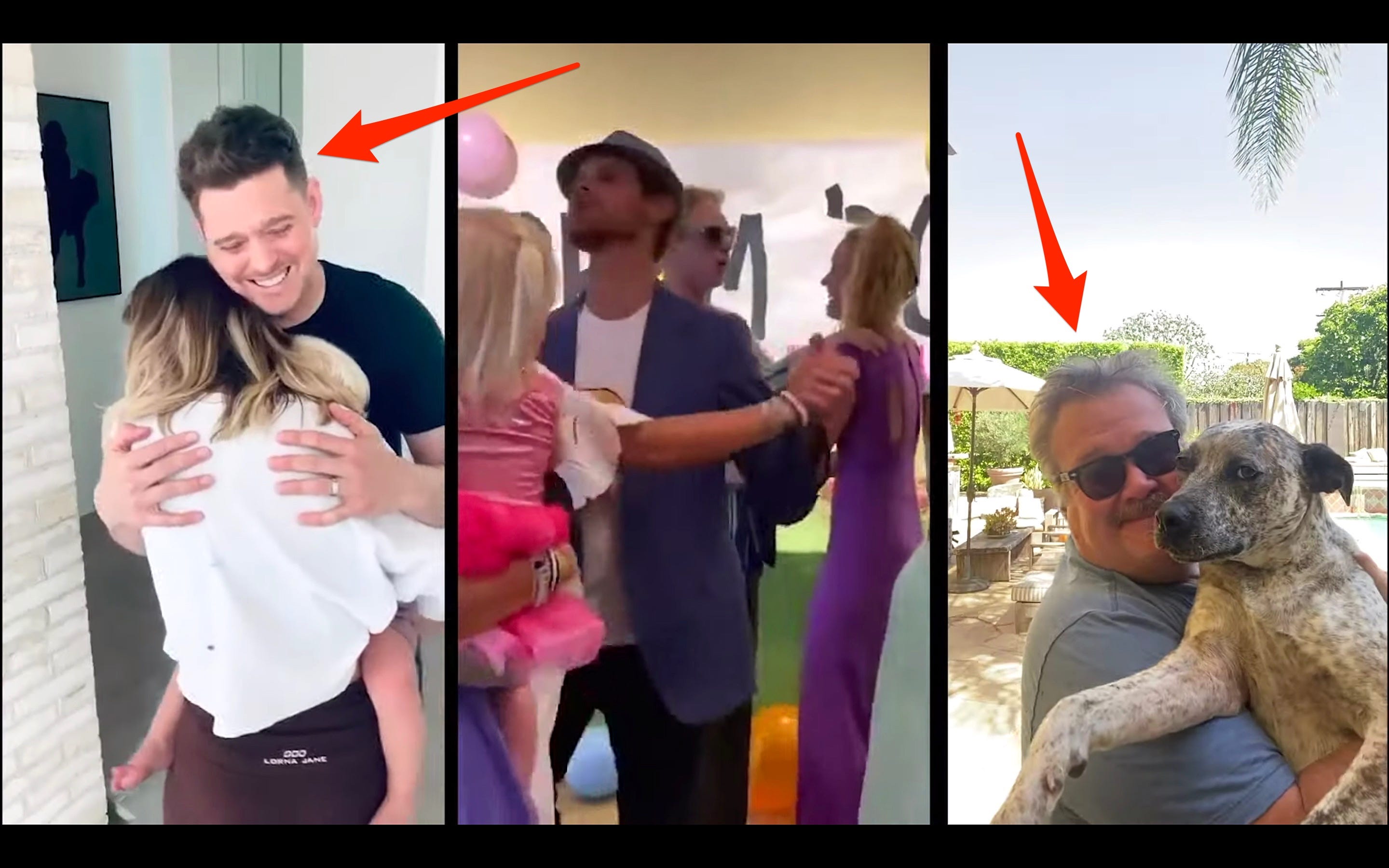 Ariana Grande/YouTubeMichael Bublé with his family, far left, and Eric Stonestreet with his dog, far right.

Bublé could be seen dancing with his wife and one of their three children, while the “Modern Family” actor was accompanied by his dog.

Grande’s mother Joan is seen dancing with one of the family’s dogs. 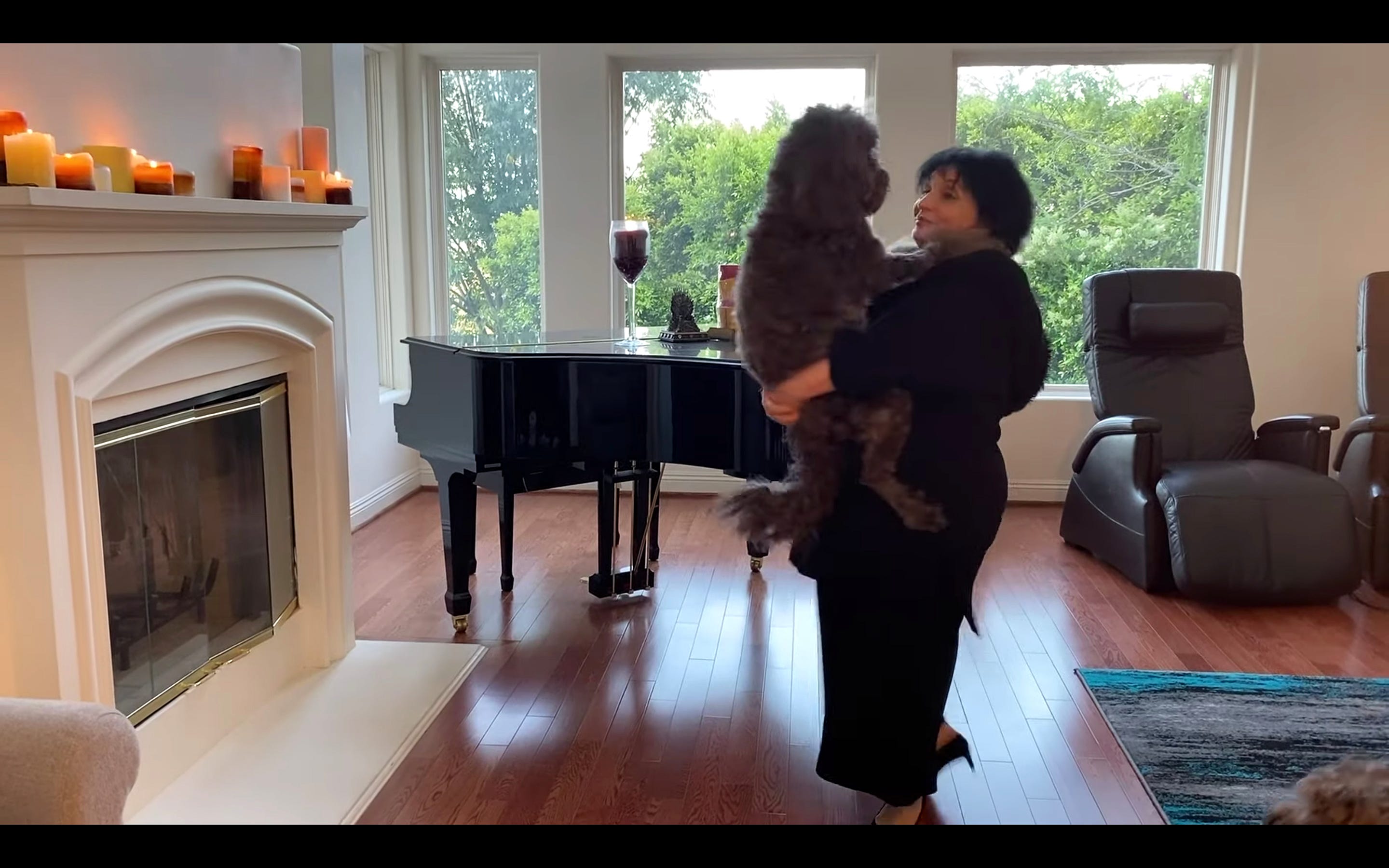 Ariana Grande/YouTubeJoan Grande is the mother of Ariana and Frankie.

Grande’s mother has adopted at least five chocolate labradoodles, including a dog that Grande herself adopted in 2015, named after the “Harry Potter” character Sirius Black.

Grande’s brother Frankie also appears in the video, dancing with his boyfriend. 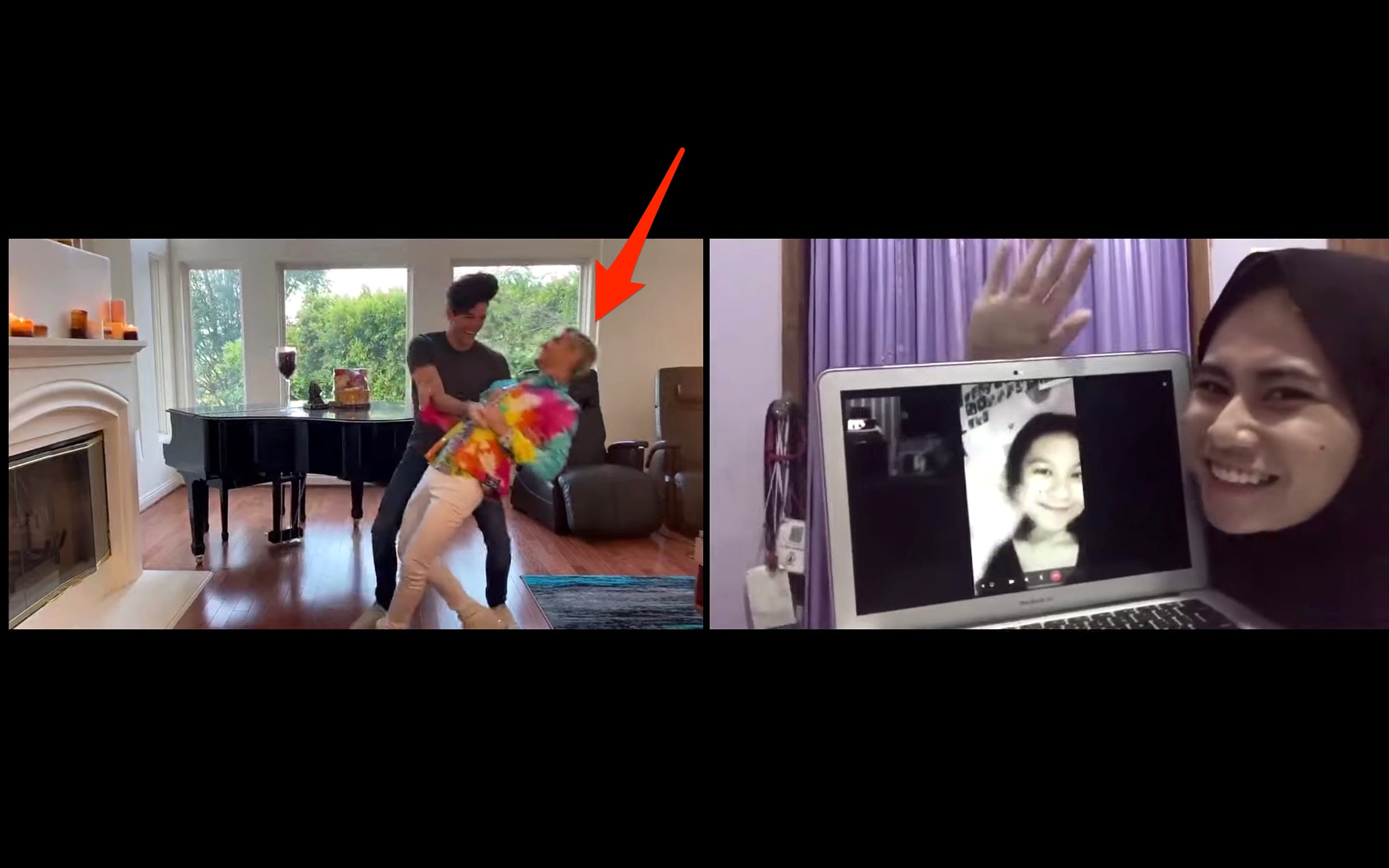 Ariana Grande/YouTubeFrankie Grande is dipped by his boyfriend, Hale Leon, in the ‘Stuck With U’ video.

Frankie Grande has been dating Hale Leon for nearly one year.

Elizabeth Gillies is seen dancing with and kissing her boyfriend. 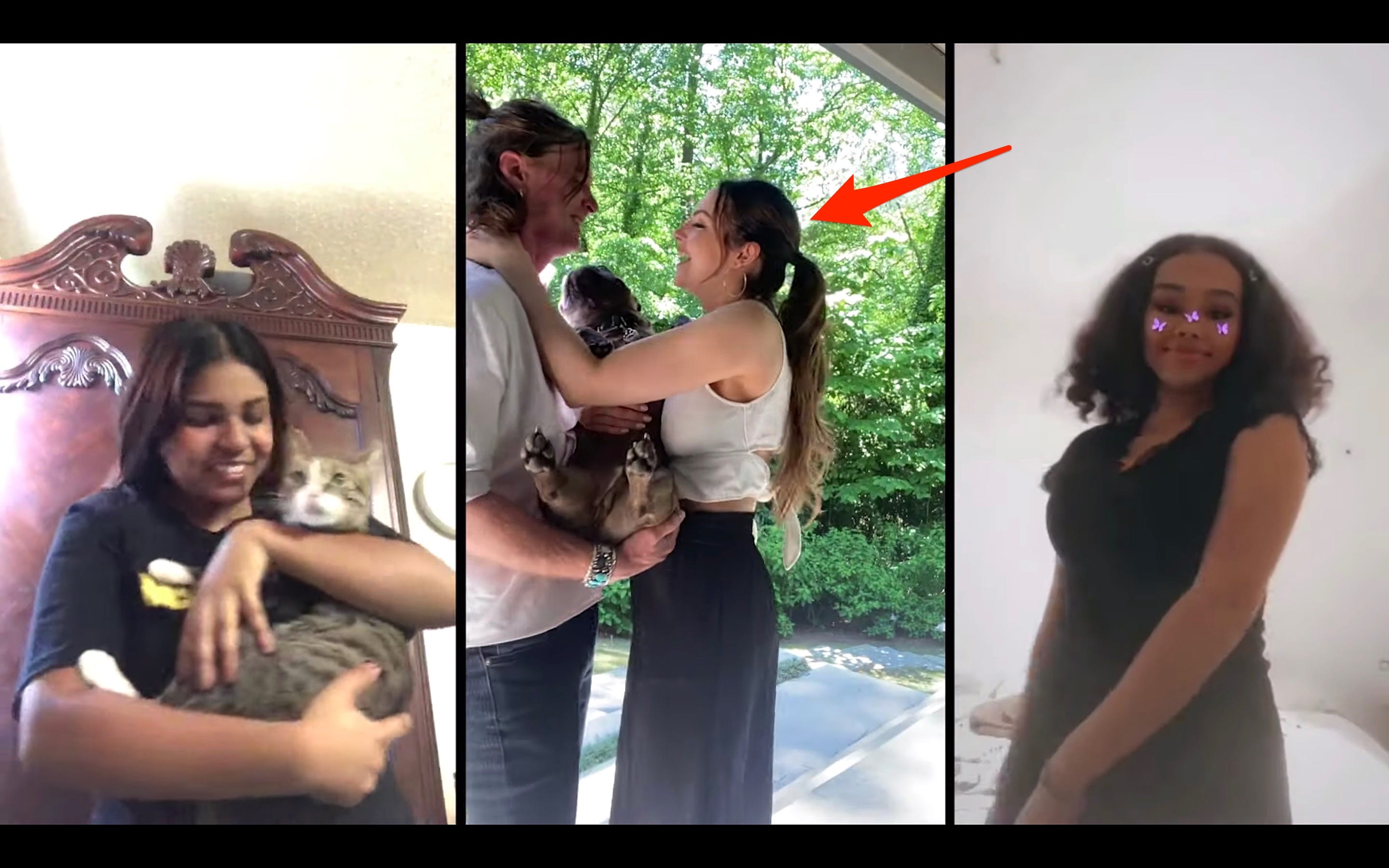 Ariana Grande/YouTubeElizabeth Gillies, her boyfriend, and their dog in the ‘Stuck WIth U’ video.

The “Dynasty” star, who costarred alongside Grande in the Broadway musical “13” and later on Nickelodeon’s “Victorious,” has been fairly private about her relationship. 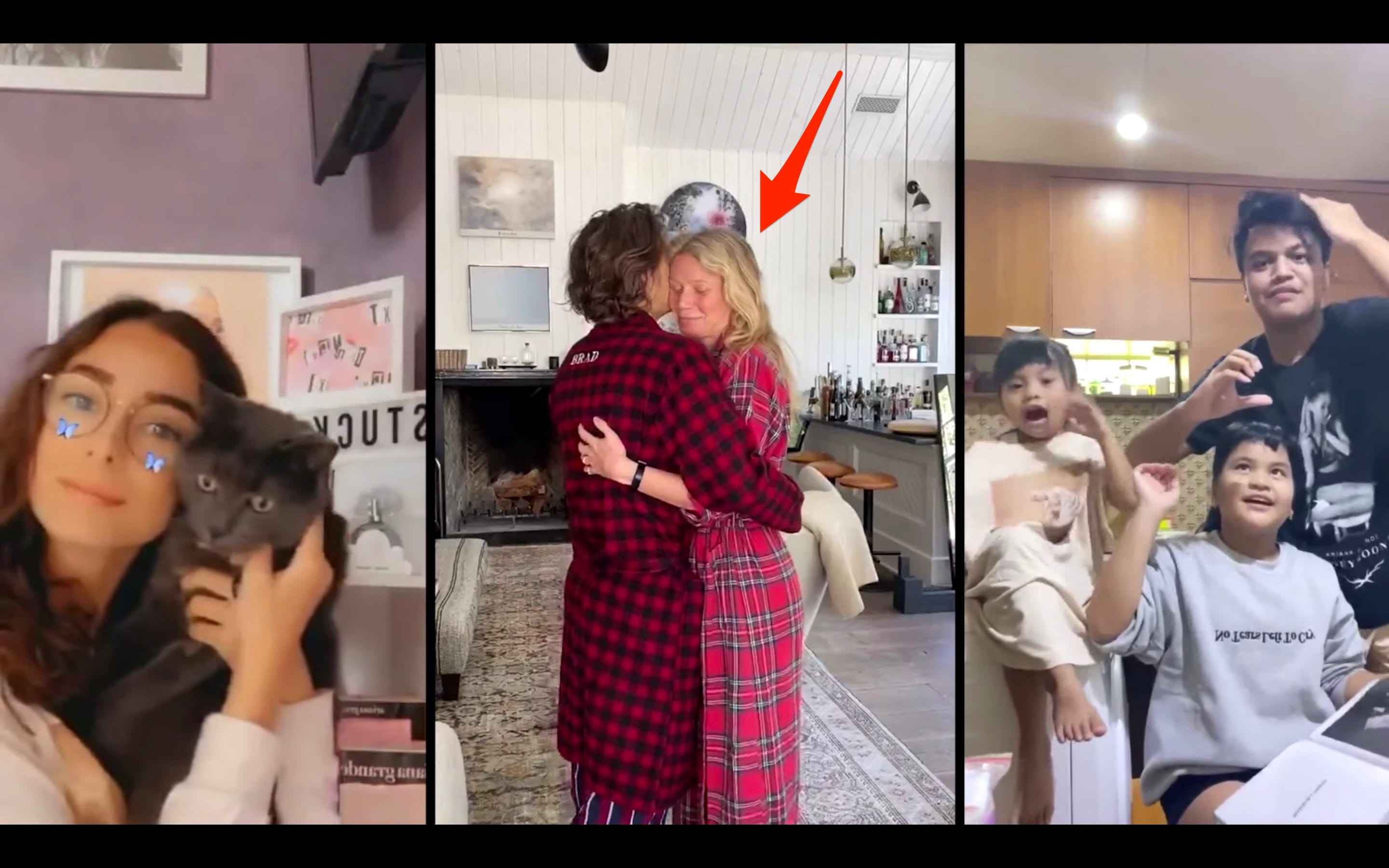 Ariana Grande/YouTubeGwyneth Paltrow and Brad Falchuk slow dance in the ‘Stuck With U’ video.

Paltrow and the “Glee” co-creator announced their engagement in January 2018 and got married later that year. 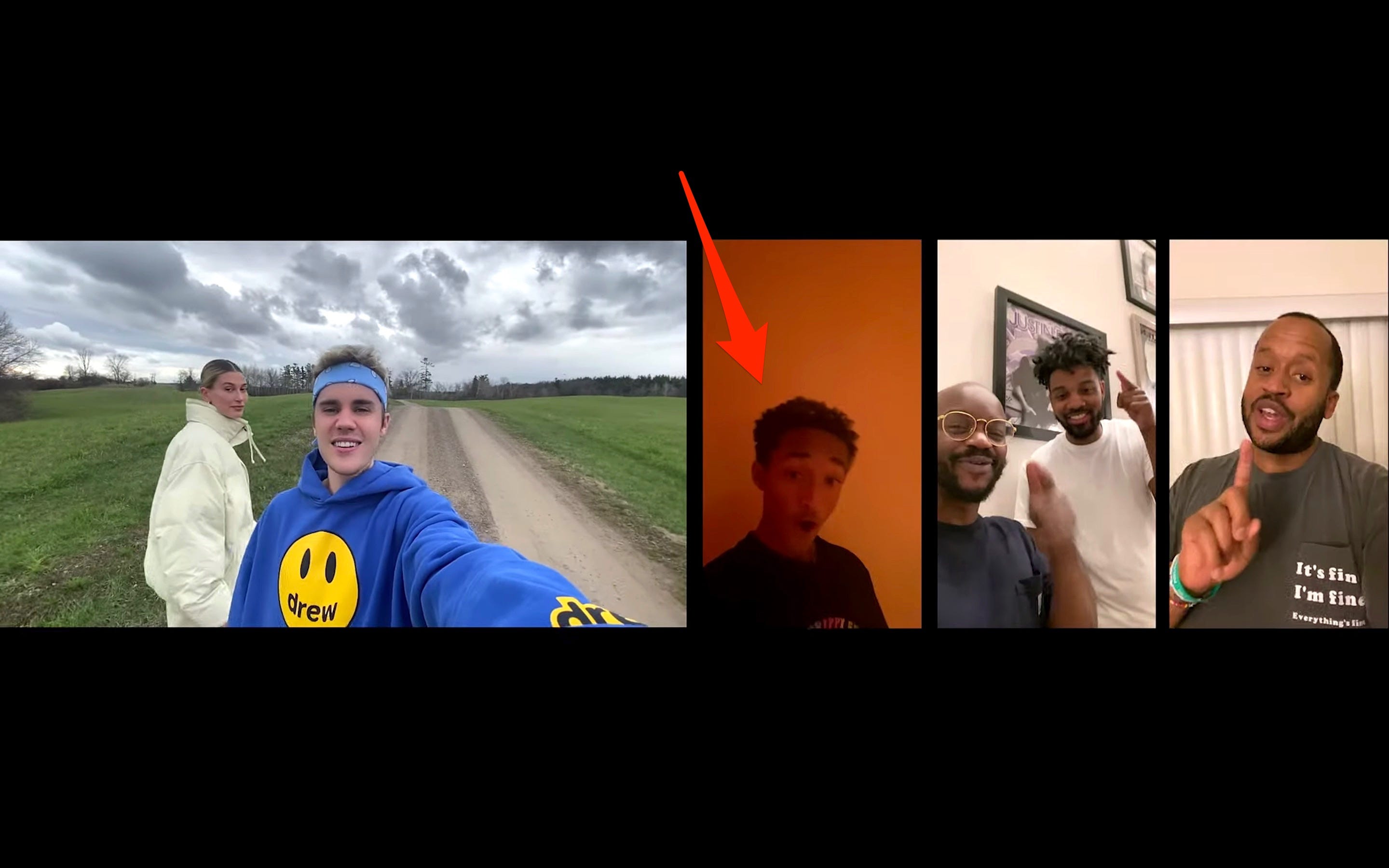 Ariana Grande/YouTubeJaden Smith is seen going solo in ‘Stuck With U.’

Smith and Bieber have been friends for years. Smith was featured on a remix of one of Bieber’s earliest hits, “Never Say Never,” in 2010.

This clip also shows more of Bieber’s friends: DJ Tay James, who has toured with Bieber as the pop star’s MC, and Kenny Hamilton, who was Bieber’s former road and tour manager.

Kylie and Kendall Jenner make a cameo together. 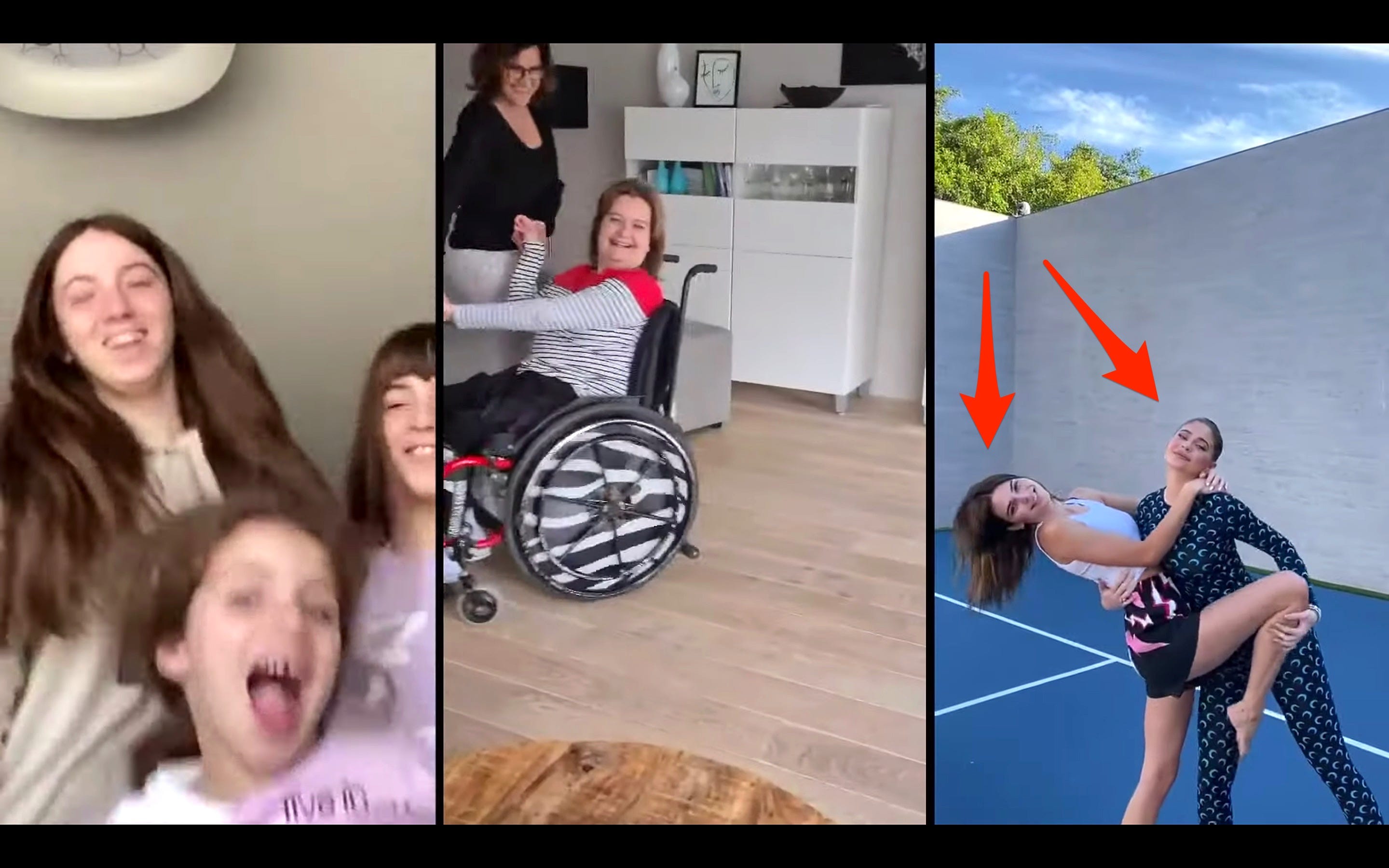 Ariana Grande/YouTubeKendall and Kylie Jenner, far right, embrace each other in the ‘Stuck With U’ video.

It looks like the Jenner sisters filmed their clip on the tennis court in Kylie’s California compound. 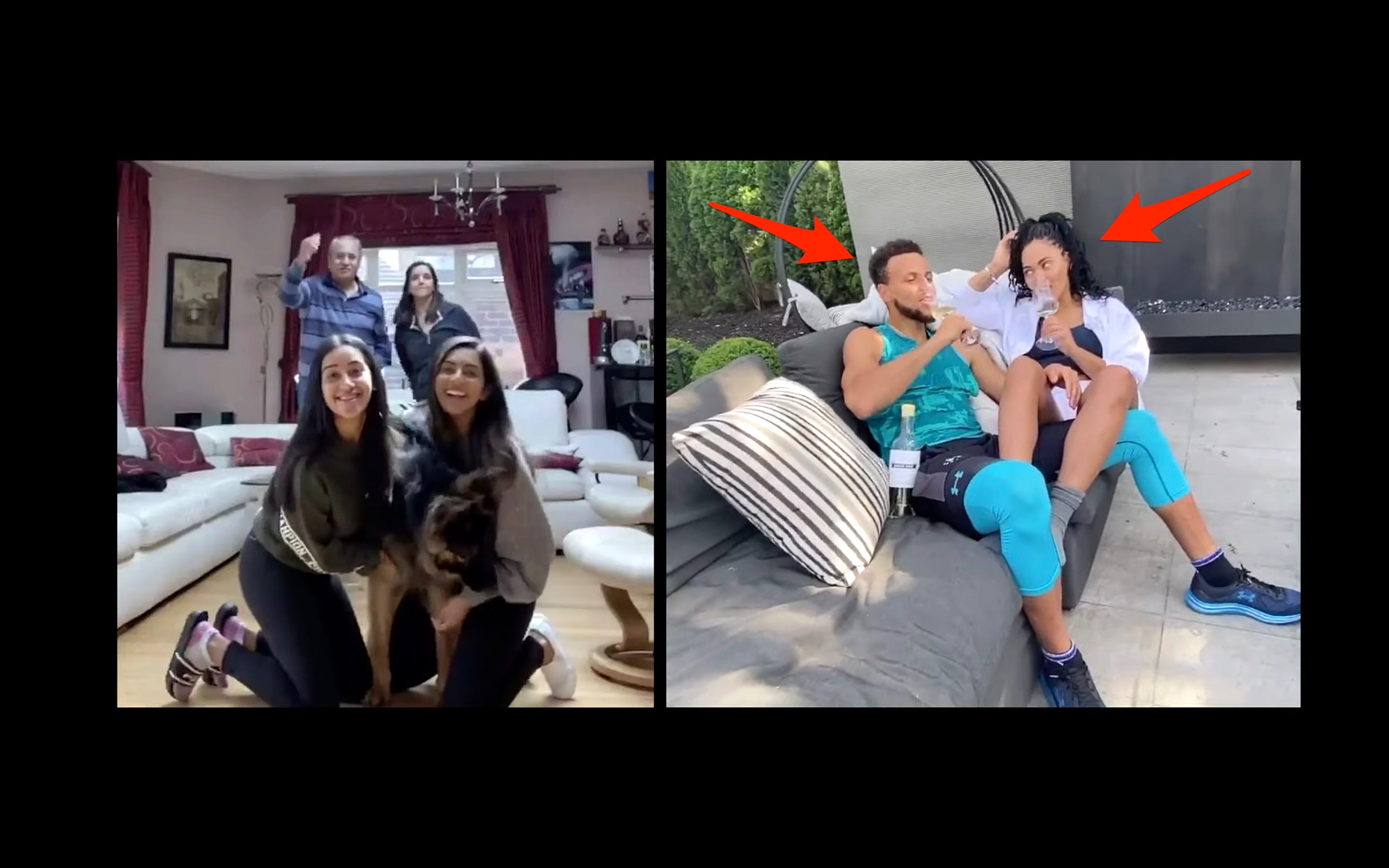 Ariana Grande/YouTubeSteph and Ayesha Curry have been married since 2011.

It looks like Kate Hudson and her boyfriend, Danny Fujikawa, make a grainy appearance. 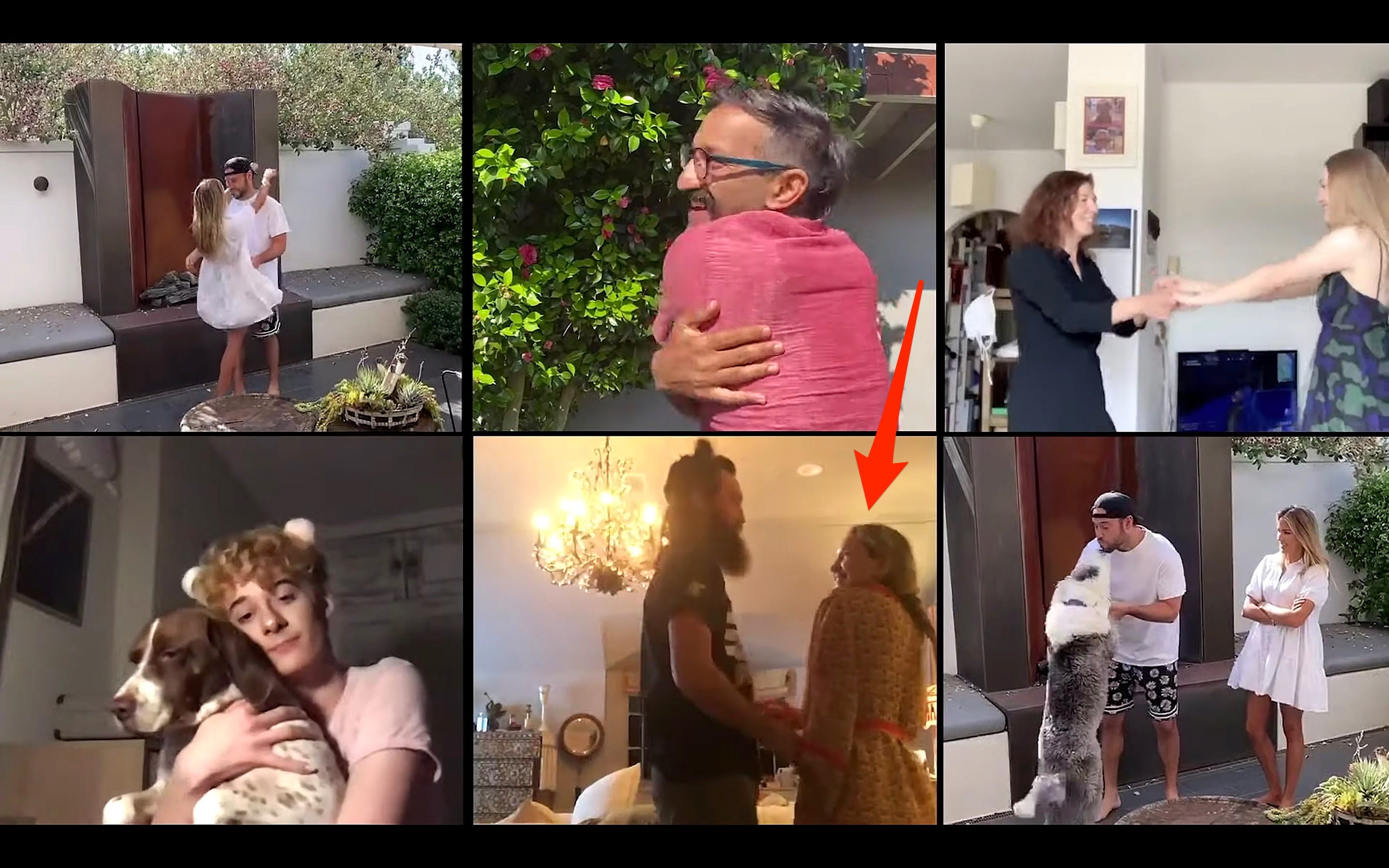 Ariana Grande/YouTubeKate Hudson and Danny Fujikawa have been dating since 2017.

Hudson and Fujikawa welcomed their first child together, daughter Rani Rose, in 2018. 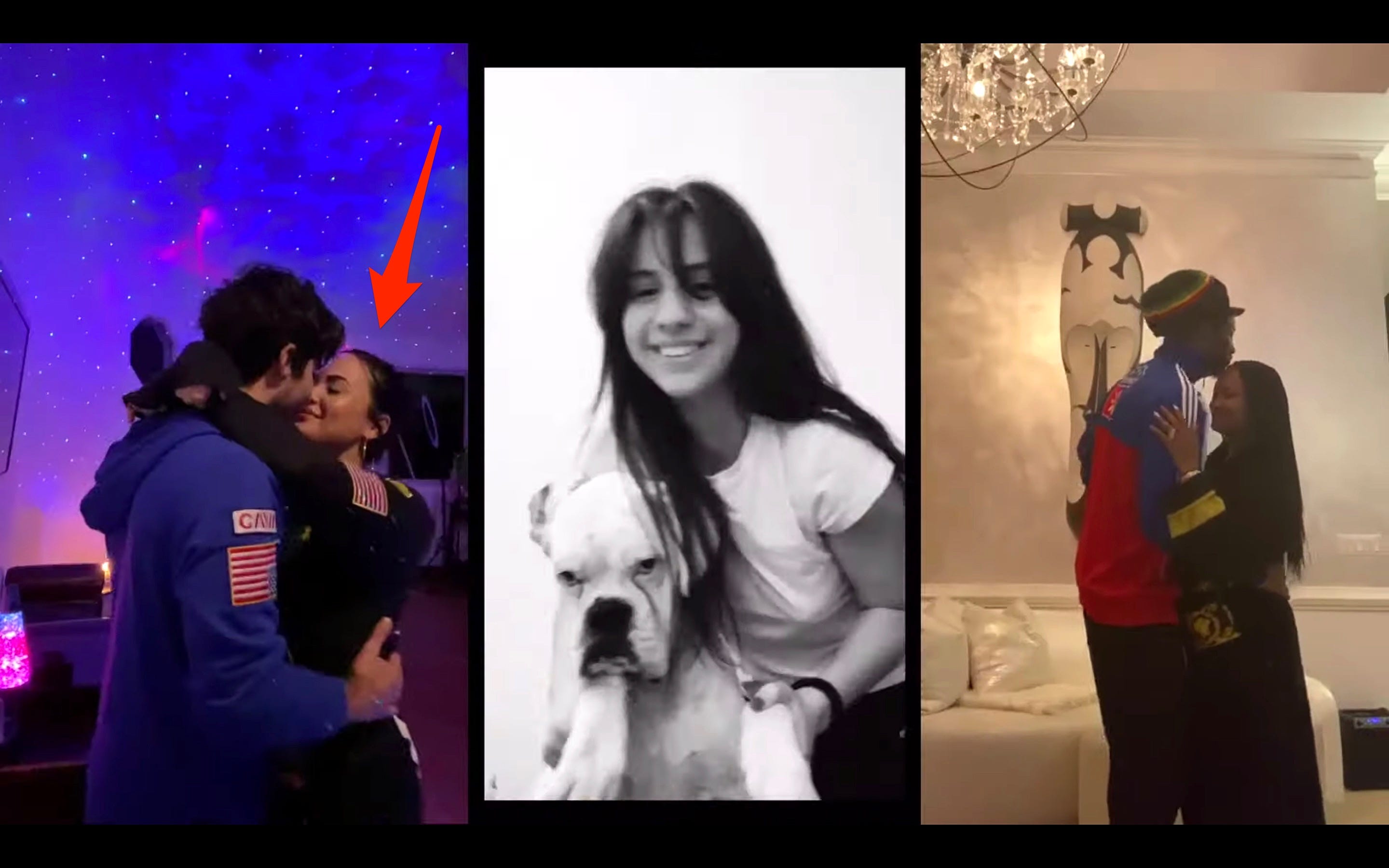 Lovato has yet to officially confirm her relationship with Ehrich, although they have had some flirty exchanges on social media.

Some fans think the other couple in this clip is 2 Chainz and his wife Kesha Ward, though it’s difficult to be sure. (The rapper and Grande are friends, having previously collaborated on the 2019 track, “Rule the World”).

Chance the Rapper and his wife, Kirsten Corley, share a sweet moment. 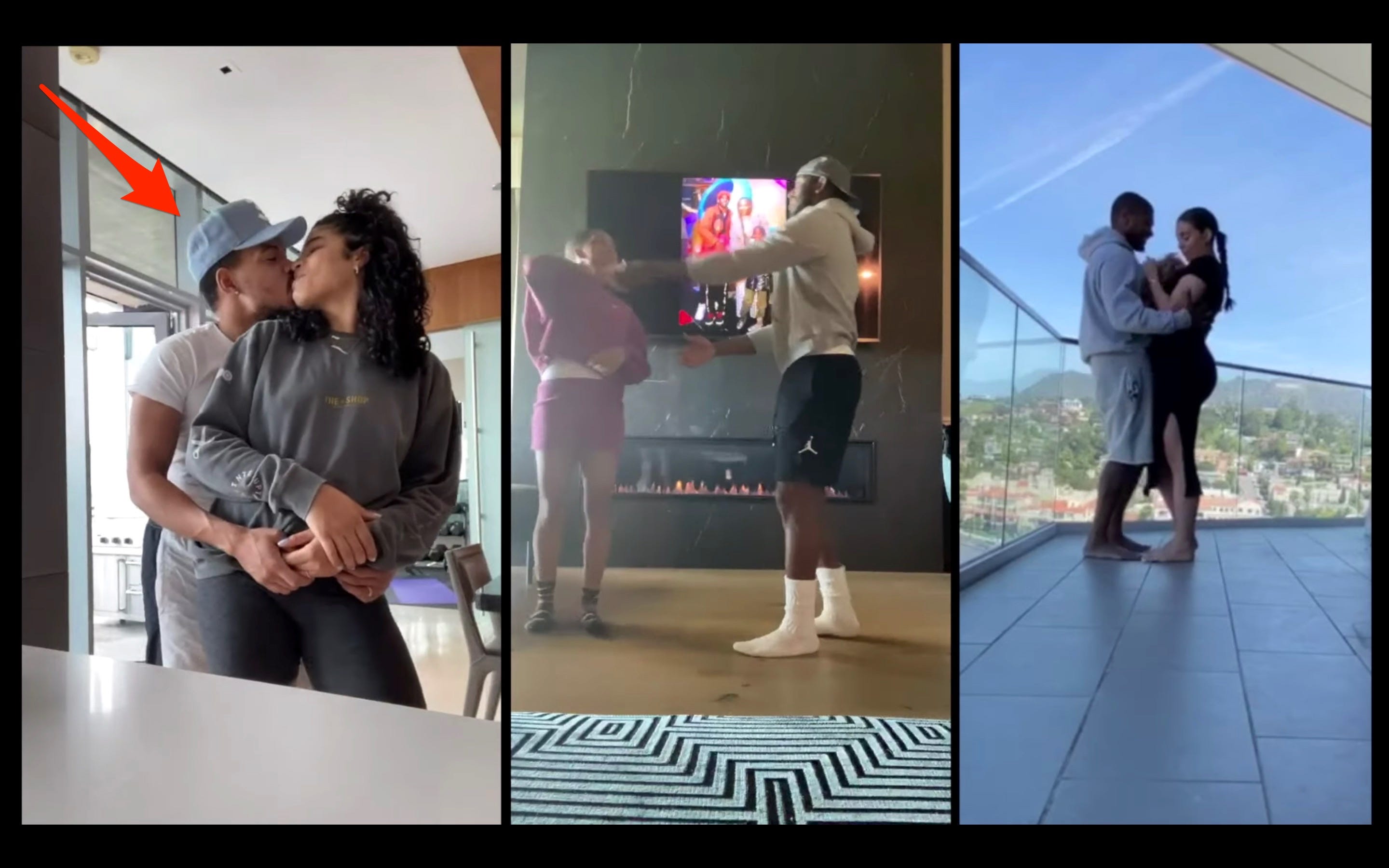 Ariana Grande/YouTubeChancelor Bennett and Kirsten Corley have been married since 2019.

Chance was 9 years old when he first met his now-wife. The couple now have two kids together.

It also looks like LeBron James and his wife, Savannah Brinson, are the centre couple featured here, but the clip is too blurry to be certain.

If you didn’t watch until the end, you missed Grande’s apparent boyfriend reveal. Ariana Grande/YouTubeIt looks like Grande is confirming her relationship with Dalton Gomez.

Grande herself is only shown alone, with her dog Toulouse, or with various props, like an alien head or a glass of wine, until the very end of the video.

She’s shown hugging and cuddling with a tall man who seems to be Dalton Gomez, a real estate agent whom Grande has reportedly been dating for months.