40% of people infected with COVID-19 are asymptomatic, a new CDC estimate says 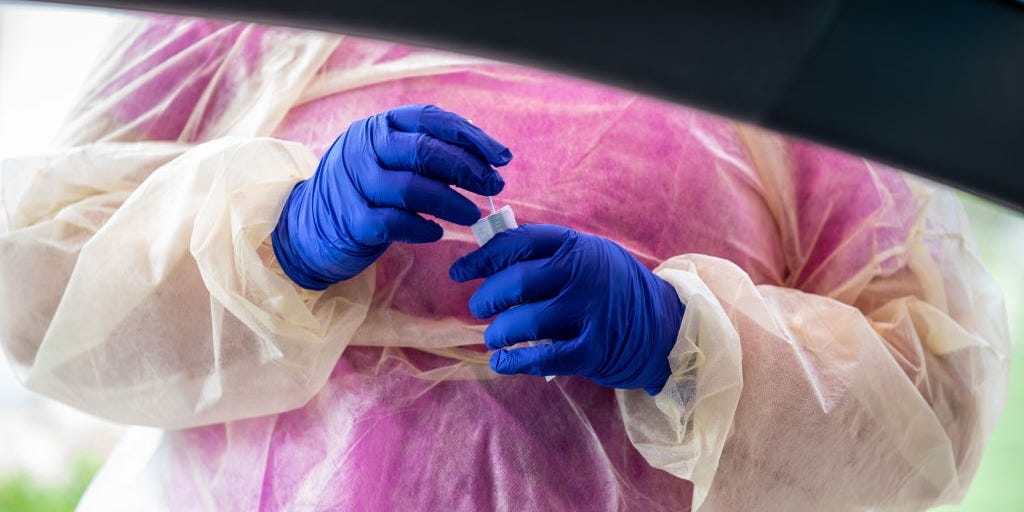 Sergio Flores/Getty ImagesA nurse prepares to swab a patient at a COVID19 testing centre on July 7, 2020 in Austin, Texas.

New guidance by the Centres for Disease Control and Prevention estimates that 40% of people infected with COVID-19 are asymptomatic and the chance of transmission from people with no symptoms is 75%.

In updated guidance also reported by CNN, the agency expanded its “current best estimate” based on data from late last month to raise the rate of people infected with COVID-19 who are asymptomatic from 35%, which was reported in late May, to 40%. The agency previously estimated that the chance of transmission of the virus from asymptomatic people was 100%, CNN reported.

The new report also included an “Infection Fatality Ratio,” which counts deaths in symptomatic and asymptomatic cases to more accurately capture “disease severity.” Under the new metric, the CDC estimated that 0.65% of people infected with Covid-19 are forecasted to die.

As several states in the South and West of the US recorded significant upticks in the cases and hospitalizations from COVID-19, top agencies including the CDC and the World Health Organisation have released updated information on the transmission of the virus.

The WHO added to concern over how easily the virus can spread on July 9, when it identified for the first time that the coronavirus may be transmitted through aerosols, which can linger in the air over several feet, Business Insider’s Hilary Brueck previously reported.

The updated data came after hundreds of scientists and engineers drafted an open letter to the WHO demanding it changes its stance on transmission, which had said the virus was spread by droplets that are much larger and heavier, and fall through the air faster than aerosols.

Asymptomatic carriers are also of particular concern for officials grappling with plans to reopen schools. School districts and pediatricians across the US have expressed concern for reopening amid spikes in cases in their states and extensive safety guidelines from the CDC, despite pressure from President Donald Trump’s administration.

Though children have been identified as at a lower risk of suffering serious illness and death from COVID-19, the CDC has said that they can function as asymptomatic carriers of the virus and can pose risks to vulnerable populations, Business Insider’s Connor Perrett previously reported.

US Surgeon General Jerome Adams said Sunday that despite record-breaking surges in coronavirus cases, the US could turn around novel coronavirus infections in two to three weeks if “everyone does their part” by abiding with official prevention recommendations.

“So just as we’ve seen cases skyrocket, we can turn this thing around in two to three weeks if we can get a critical mass of people wearing face coverings, practicing at least six feet of social distancing, doing the things that we know are effective,” Adams said.