The US paid Deloitte $44 million for a vaccine appointment system laden with glitches. Some states are scrambling for an alternative. 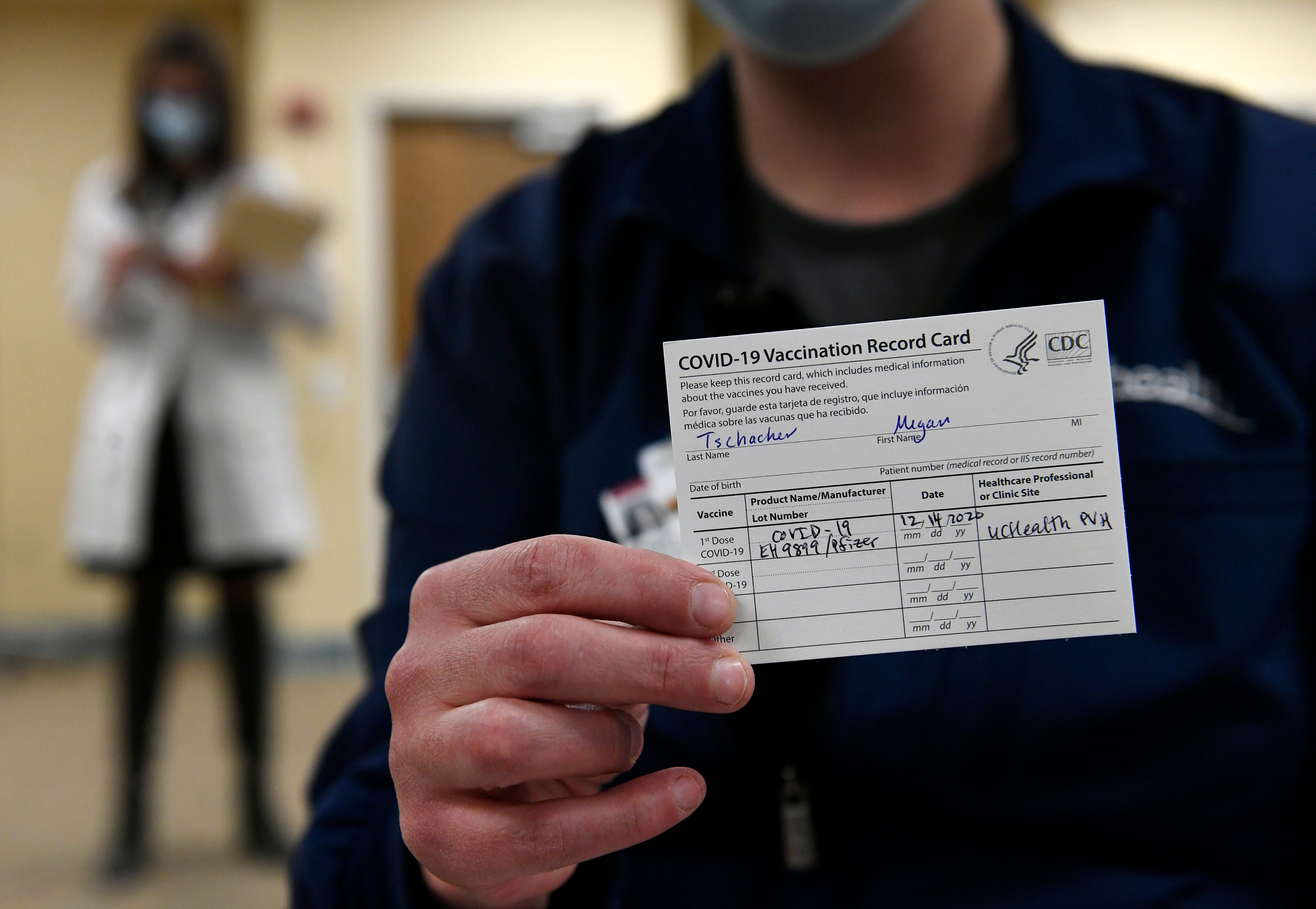 Americans eligible for coronavirus vaccines are still struggling to get appointments.

“Every clinic, every hospital has its own mechanism of communicating, recruiting, and setting up appointments,” Dr. Thomas Dobbs, Mississippi’s state health officer, said in a Thursday press briefing. “That’s the real challenge because we have basically 100 different ways to do the same thing.”

It wasn’t supposed to be this difficult. In May, the Centres for Disease Control and Prevention signed a $US16 million deal with the consulting firm Deloitte, a top federal IT contractor, to create a centralised website through which states could schedule their vaccine appointments. The system was also meant to monitor vaccine inventory and report each shot as it was administered. Deloitte received another $US28 million for the project in December â€” bringing the total to $US44 million.

The tool the company produced is called the Vaccine Administration Management System (VAMS). State officials and health clinics can use the site for free to coordinate their vaccine rollouts. But in the end, only nine states opted in, with the rest â€” Mississippi included â€” deciding against VAMS. Many said no to the system due to concerns about its performance.

“We declined to use VAMS after vetting it in January, spending a lot of time looking at it and kicking the tires,” Dr. Nirav Shah, director of the Maine Centre for Disease Control and Prevention, said at the Thursday briefing. “We found that it had several limitations and so we did not activate it at all.”

Most states are now left without a centralised system to streamline their responses. But of the nine states that did start using VAM â€” including Connecticut, New Hampshire, South Carolina, Virginia, and West Virginia â€” many have encountered technological glitches, including website crashes, cancelled appointments, and login difficulties.

Since mid-December, VAMS has helped administer just around 4% of the total shots given in the US, or more than 1.5 million.

Cancelled appointments and no confirmation emails 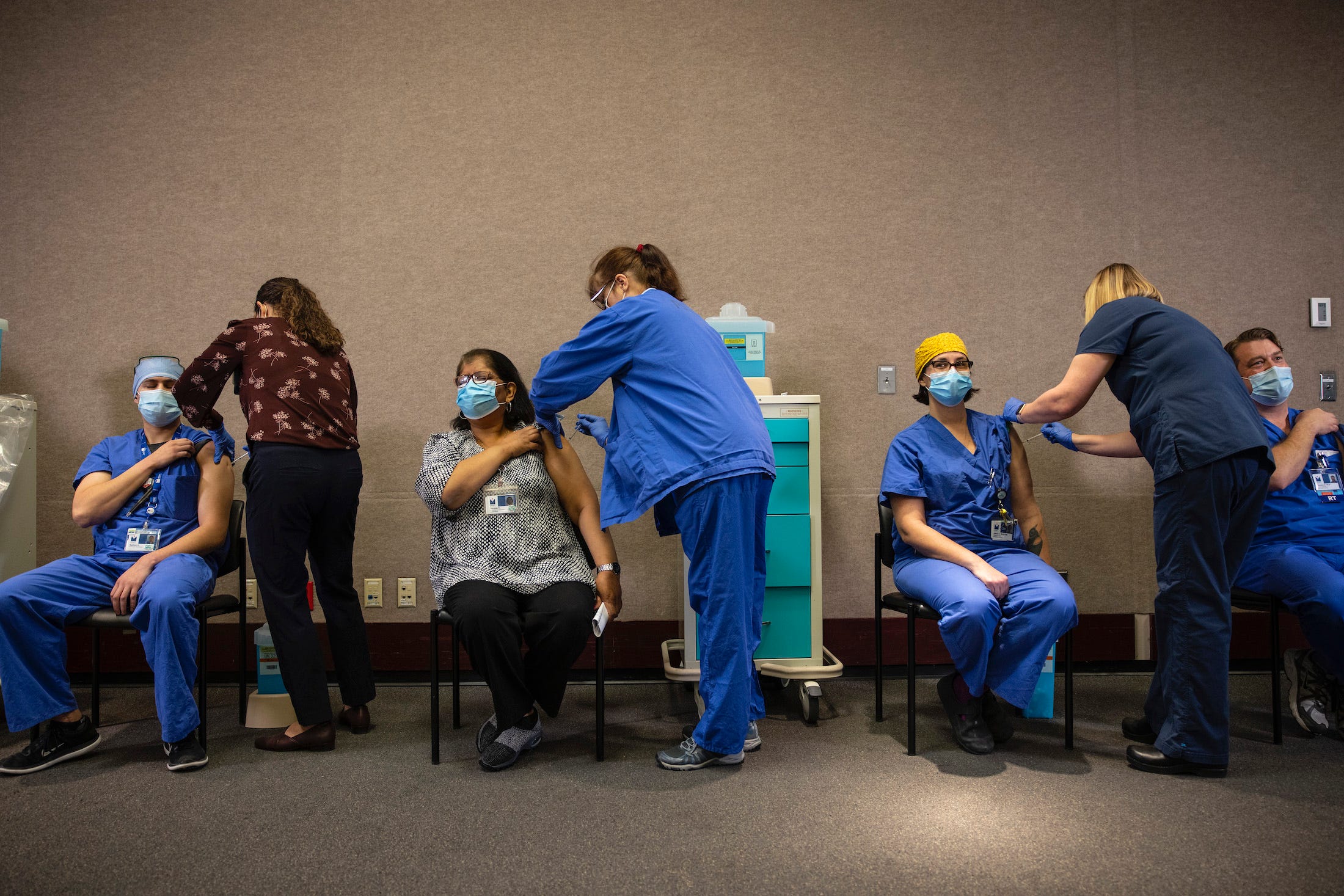 Paula Bronstein/Getty ImagesHealthcare workers get the Pfizer-BioNTech COVID-19 vaccine at the Legacy Emanuel Medical Centre in Portland, Oregon, on December 16, 2020.

VAMS, he said, “has become a cuss word” at his department.

Lorrin Pang, the district health officer in Maui, Hawaii, told MIT Technology Review that the tool wouldn’t let him send instructions to people about how to prepare for their vaccine appointments. The system often locked him out of the dashboard for clinic administrators, he added. Pang’s drive-through clinic quickly returned to recording vaccinations by hand.

In New Hampshire, residents reported that they didn’t receive confirmation emails for their second dose appointments.

“The VAMS system clearly has issues. It is clunky, it is messy, and we really can’t control it,” New Hampshire Gov. Chris Sununu told the New Hampshire Union Leader.

Officials say VAMS ‘hasn’t lived up to its promises’ 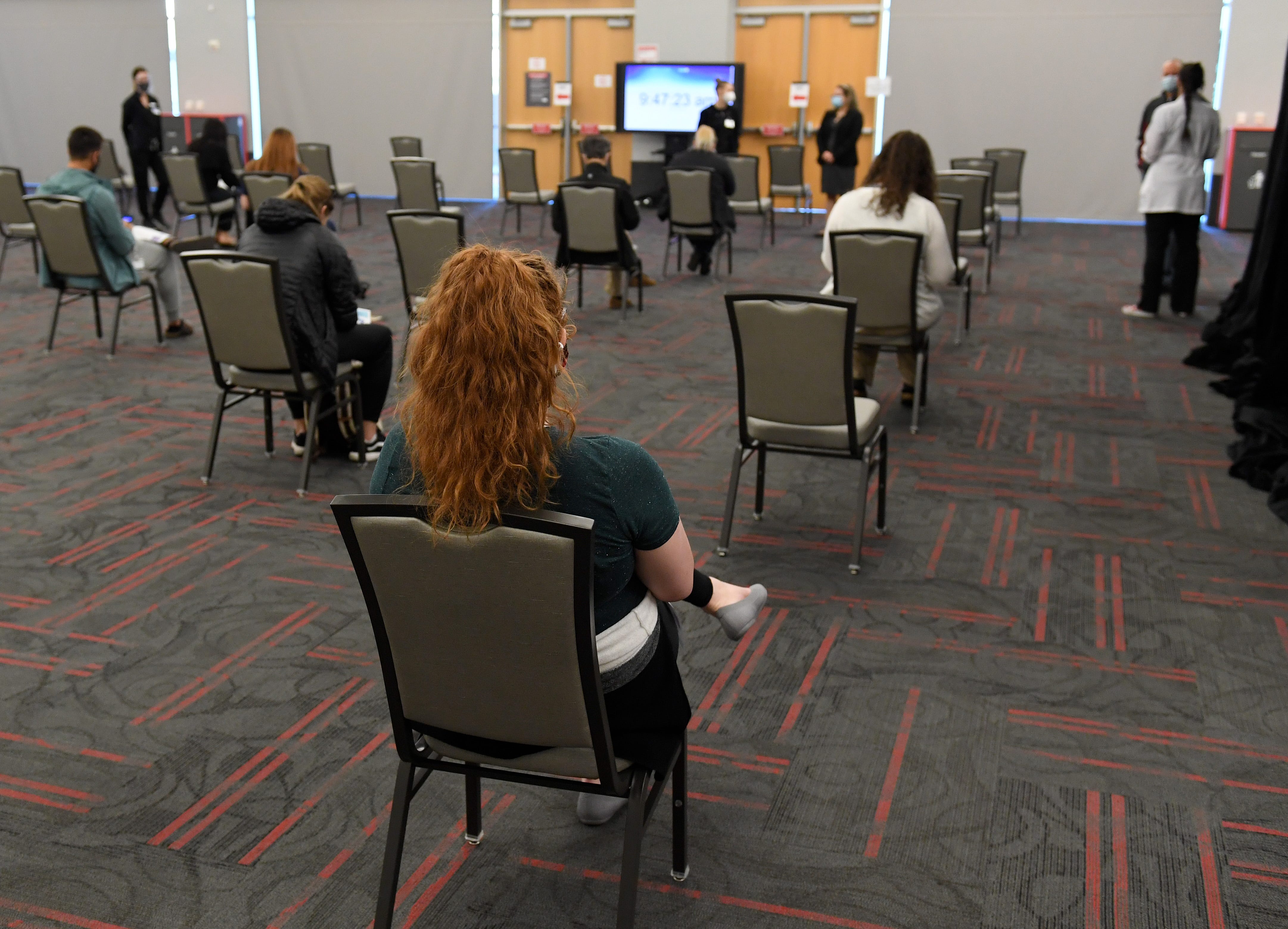 A Deloitte spokesperson told Insider that VAMS was originally designed to help the CDC track the distribution and administration of vaccines “at a limited number of pre-selected sites.” But as a courtesy to states without the time or resources to create or procure their own scheduling systems, he added, the CDC gave them the option to use VAMS.

“Since it went live to support the critical first phase of vaccinations, VAMS has had no downtime due to system or performance issues,” the Deloitte spokesperson said. “While some users have reported challenges, VAMS is not spontaneously cancelling appointments.”

The CDC did not respond to Insider’s request for comment.

According to Shah, VAMS was supposed to be available to everyone who wanted to register for an appointment. But the tool “really hasn’t lived up to its promises,” he said. Without a centralised system, the process of soliciting vaccine appointments in Maine has been “suboptimal,” Shah added.

“One can hope that there will be a successor [to VAMS] in the future,” he said.

But creating any centralised, government-run website is “super hard,” according to Pouria Sanae, CEO of ixlayer, a health software company that helps streamline COVID-19 testing and some vaccinations for businesses, health systems, and government branches.

“Take taxes as an example,” Sanae told Insider. “We don’t have a centralised tax platform, and that’s something we do every year.”

A ‘Google-like effort’ with ‘old-school’ technology 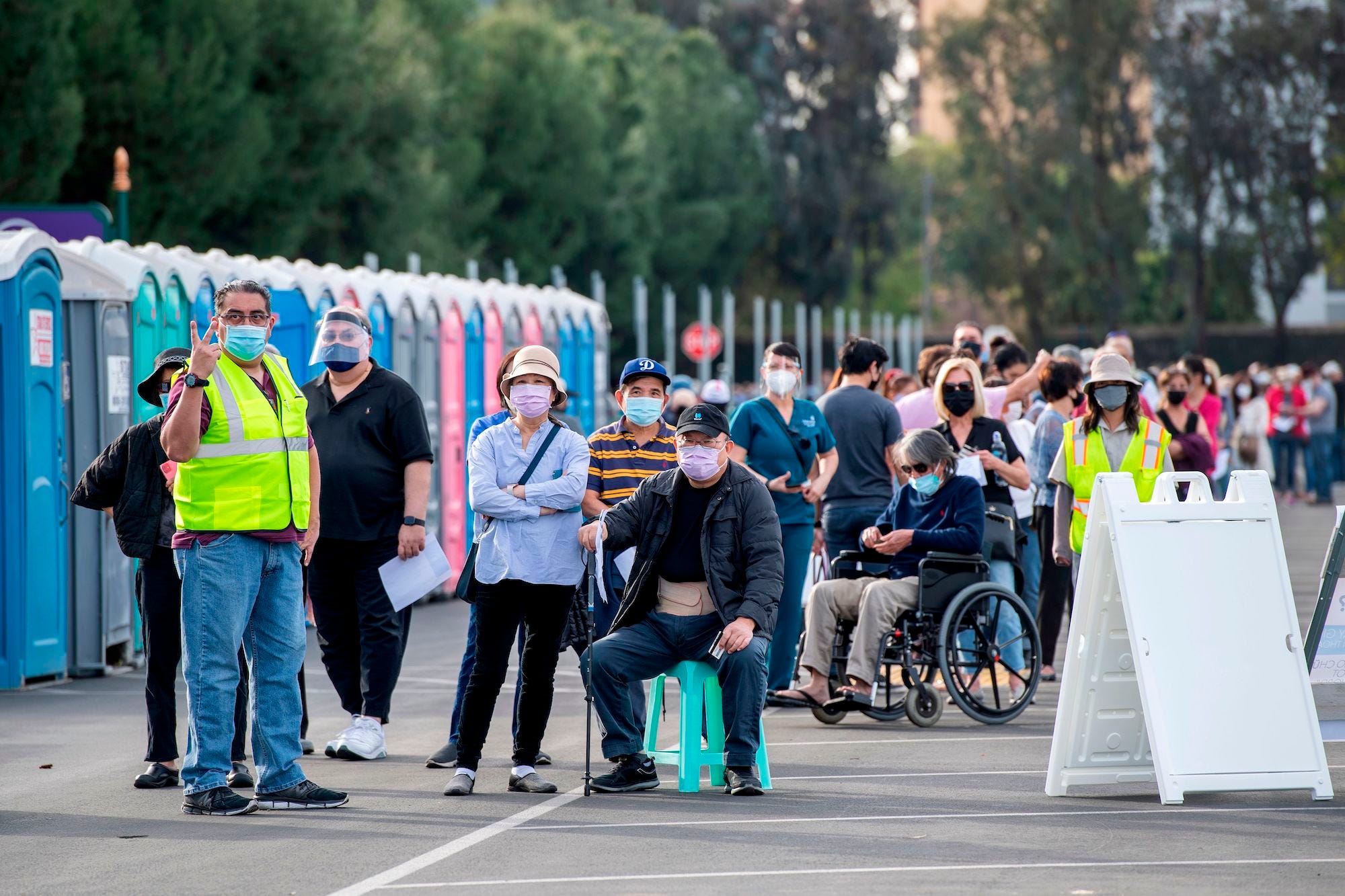 Valerie Macon/AFP/Getty ImagesPeople wait in line on the opening day of the Disneyland COVID-19 vaccination site in Anaheim, California.

The CDC identified Deloitte as the only “responsible source” capable of building a centralised vaccination platform, so the company didn’t have to bid on the project. Many software experts, however, think VAMS would have been in better hands with a large technology company.

“It’s a Google-like effort,” Sanae said. “It’s not meant for government organisations to do.”

To avoid bottlenecks in the vaccine rollout, he added, states need a website that can consistently be updated while in use. That way, if a patient misses an appointment or clinics run low on doses, those hurdles won’t slow down the entire vaccination process.

Deloitte’s technology, by contrast, is “old-school,” Sanae said. It relies on a fixed “waterfall model” that, for the most part, can’t handle many changes.

“There’s a reason why Apple and Windows are bugging us with these updates: because they’re iterating,” he said. “We really need that for any software that’s going to support vaccination.”

VAMS is likely to create more bottlenecks down the road, Sanae thinks, as people return for their second shots.

“One thing that you will see in a month, I guarantee you, is people that got the first dose showing up to different locations carrying different vaccines, showing up in different states,” he said. 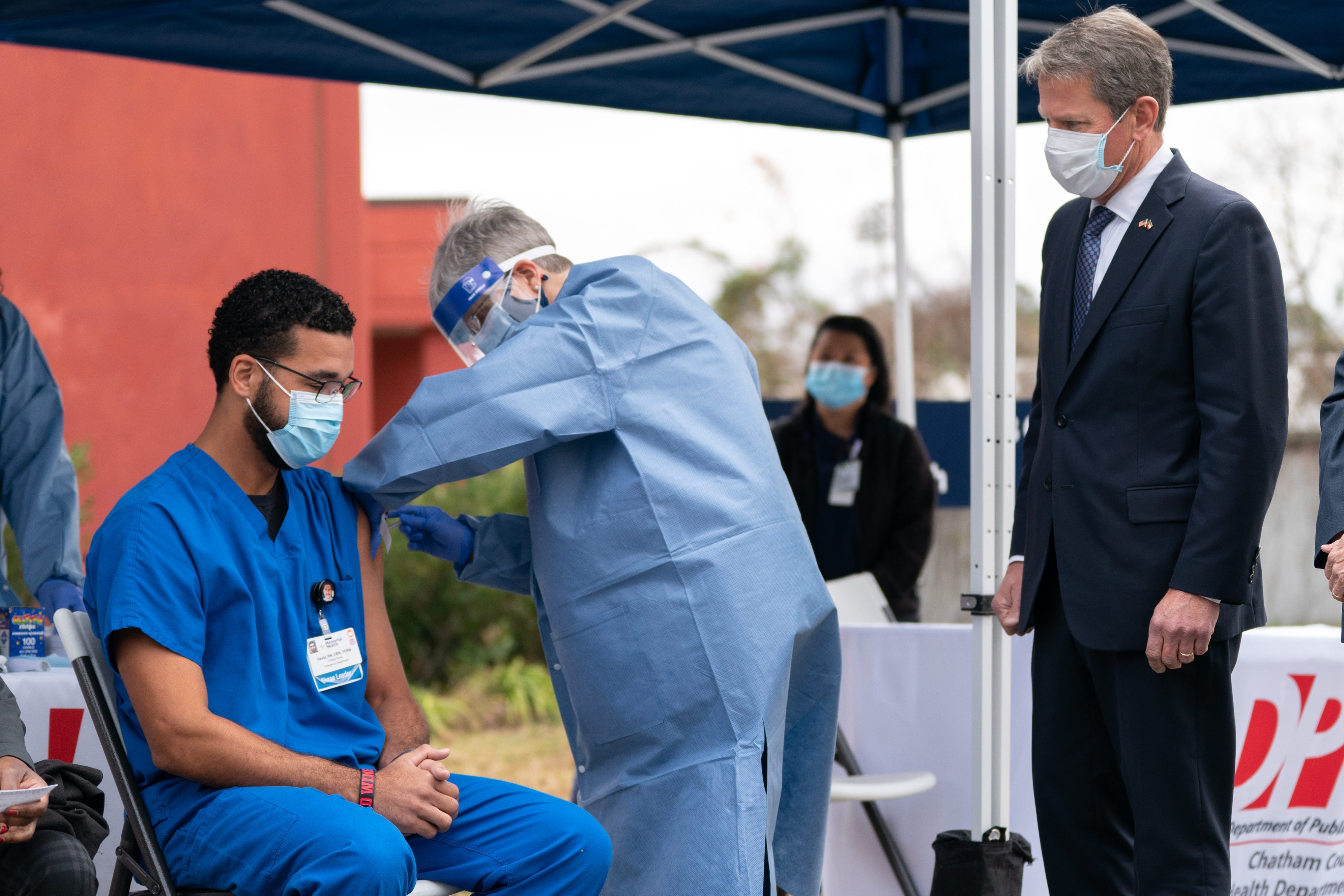 At least one state, Virginia, is already transitioning from VAMS to a different vaccination system, called PrepMod, which is also used by several other states. Tammie Smith, a spokesperson for the Virginia Department of Health, told Bloomberg that the platform is “more customisable” than VAMS.

Still, at the start of February, a flaw in the PrepMod system allowed a handful of residents in Roanoke Valley, Virginia to sign up for vaccine appointments before they were eligible. The residents had gotten hold of a registration link that wasn’t meant to be sent out, local television station WSLS reported.

California clinics and nursing homes have also had difficulty accessing the PrepMod system, according to the Los Angeles Times.

Sanae said PrepMod has found it a “bit tricky” to onboard patients. He added that states may also have a hard time transferring patient data from VAMS to a new platform. He likened the process to switching each person’s Gmail account to Yahoo.

Changing appointment systems could be costly, too.

“At some point with IT solutions, there is a bit of a lock-in effect and the cost of switching from one registration platform to another can be significant,” Shah said.

But he added that some states are still looking to abandon VAMS as quickly as possible.

“I’ve spoken with at least one counterpart of mine, where their state did activate [VAMS], and they can’t wait to find another solution,” Shah said.

Maura Fitzgerald, a spokeswoman for the Connecticut Department of Public Health, told Bloomberg that her state is exploring alternative systems. New Hampshire also plans to unveil a new scheduling system by March.