I broke etiquette and text-invited ‘B list’ guests to our wedding last-minute. I don’t regret it.

My now-husband and I texted wedding invitations to some guests a few weeks out. That method isn't recommended, but our B-listers didn't take offense. 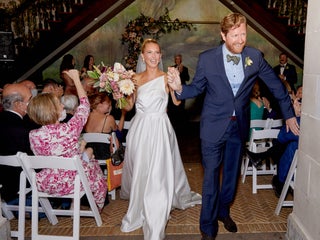 From buying a gift and a new outfit to booking... This ‘Game of Thrones’-themed wedding had a real direwolf

This Game of Thrones wedding is so legit..... Wedding invitations contain subtle hints about the level of formality and overall fanciness of the celebration, according to event planners. Those hints include the size and thickness of the paper and the time the event is called for. Once you know how grand the affair will be, you’ll have a […] Wedding invitations sometimes come in two envelopes instead of one. The reason why is that invitations used to be delivered by horse and carriage, and the outer envelope would get dirty. Another reason is that sometimes only the names of the heads of the household are listed on the outer […] Desperate to be Liked. [credit provider=”Flickr / Cameron Nordholm” url=”http://www.flickr.com/photos/cameronnordholm/4992713168/”] Couples spent an average of $28,500 to tie the knot in 2012, according to a Wedding Channel/TheKnot.com report.That’s just a couple thousand dollars shy of what the average homebuyer spends on a downpayment today ($31,000 by Trulia’s estimate). [credit provider=”Photo: Courtesy of Michael Pruser”] For the first time since the recession took hold in 2008, wedding budgets have surged.Couples spend an average of $27,000 to tie the knot, with one in five dropping more than $30,000, according to a report by TheKnot.com. That’s not even including the honeymoon. From long-lost aunts and uncles to your father-in-law’s best friend’s cousin, it’s easy to let your wedding guest list spin out of control. Minted Raises $5.5 Million And Tells Us What It’s Like To Have Marissa Mayer As An Investor

[credit provider=”Minted.com” url=”http://www.minted.com/about-us”] San Francisco based Minted.com, an e-commerce company that sells emerging designers’ work, has raised a $5.5 million Series B round. The new capital will be used to grow its 42-person staff and develop new product lines.