Waymo is now offering a fully-driverless ride-hailing service in the Phoenix area, where the Alphabet company has been piloting its business since 2018. The fully-driverless option will apply to a 50-square-mile area at first, and early users will be customers who have been testing the service. Waymo also said that […] 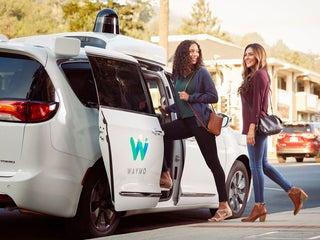 Waymo‘s chief external officer said the startup hopes its autonomous rides are “amazingly boring.” Tekedra Mawakana made the comments at Business Insider’s transportation-focused IGNITION event in San Francisco on Tuesday. “People don’t trust what they’re not familiar with,” she said. “That makes sense. We see people take their first ride […] Waymo has partnered with AAA Northern California, Nevada, and Utah and several other safety-advocate organisations to address anxiety about autonomous vehicles. Waymo introduced its first commercial service, Waymo One, in the Phoenix area last year. A goal is to help young people understand the benefits and limits of autonomous technology. […] We spoke to two Waymo One early riders about their experience in the company’s self-driving taxis. Together, the pair have easily amassed more than 100 rides from the Alphabet subsidiary. The vans are surprisingly nice, both riders said, and disengagement is minimal. Still, there’s a lot more improvement needed before […] People are attacking Waymo’s self-driving cars in Arizona by slashing tires and, in some cases, pulling guns on the safety drivers

Waymo self-driving cars in Arizona have had their tires slashed, and some of the vehicles’ safety drivers have had guns pulled on them, the Arizona Republic reports. Twenty-one instances of people attacking Waymo cars have been recorded, according to the Arizona Republic, citing police reports. It’s a fraction of overall […] Waymo has finally launched its self-driving taxi service — here are 4 ways it can profit from the program, according to a Wall Street analyst