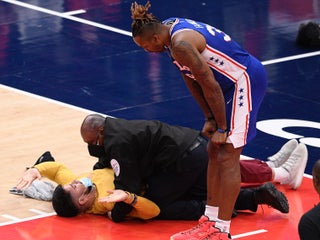 Russell Westbrook had to be held back by Wizards staff after a 76ers fan dumped popcorn on him as he walked back to the locker room. 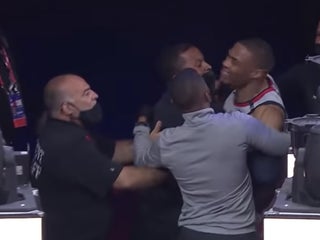 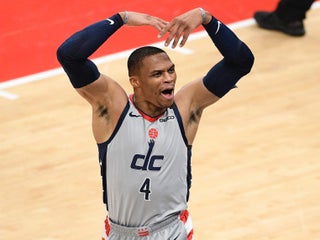 Russell Westbrook mistakenly passed the ball to a referee who was wearing a grey shirt similar to the that of his team's uniforms in a playoff game. 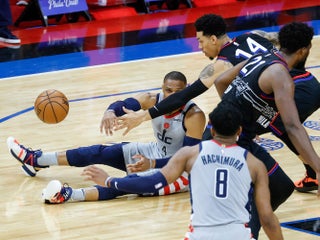 Robin Lopez made the most bizarre, H-O-R-S-E-esque shot on Sunday. During the Washington Wizards loss to the Orlando Magic, the 7-footer flung the ball over his shoulder as he fell out of bounds, and somehow the “shot” fell in the basket. The Wizards lost 120-113 to fall to 0-4 on […] 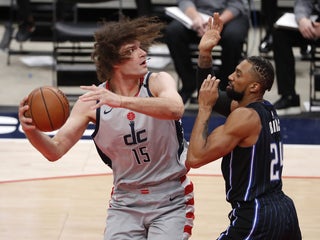 The Houston Rockets have traded superstar point guard Russell Westbrook to the Washington Wizards. In exchange, the Rockets will receive five-time NBA All-Star John Wall and a first-round draft pick. Washington’s and Houston’s GMs agreed to a deal in mere hours Wednesday after weeks of stagnation, according to ESPN’s Adrian […] 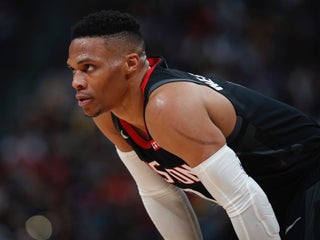 Giannis Antetokounmpo got ejected after head-butting a Wizards player

Giannis Antetokounmpo was ejected from a game on Tuesday after headbutting the Washington Wizards’ Moe Wagner. The incident occurred after Antetokounmpo was called for a charging foul on Wagner, which the Bucks challenged. Antetokounmpo then walked over to Wagner and headbutted him, prompting the ejection. Visit Insider’s homepage for more […] 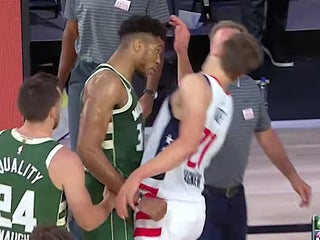 The Washington Wizards have lost all four of their bubble games and are now 24-44 on the season. Their .353 win percentage actually puts them lower in the standings than the 23-34 Charlotte Hornets, who were not even invited to the bubble. The Wizards are without their top two scorers […] 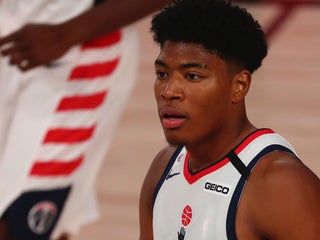 The Brooklyn Nets and Washington Wizards are both entering the NBA “bubble” in Disney with fractured squads due to injuries, COVID-19 cases, and players opting out. Though neither team has any chance of advancing in the playoffs, they will both play eight regular-season games, compete for the playoffs, and the […] 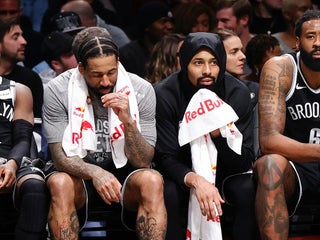 Bradley Beal is the latest NBA player to opt out of the ‘bubble.’ Here’s who else is sitting out

The NBA will resume the 2019-20 season in a “bubble” in Walt Disney World in July. So far, eight players have opted out of playing, with several others scratched because of injuries and surgeries. NBA teams travel to Disney July 7-9 to begin staying in the bubble. Visit Insider’s homepage […] 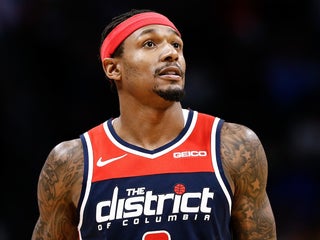 A Wizards player who is approaching free agency is sitting out the NBA’s return, and he won’t be the last

Washington Wizards forward Davis Bertans is going to sit out when the NBA season resumes in Disney World. Bertans is a pending free agent, in the midst of a career-best season, and the Wizards have little chance of making the playoffs or advancing if they do. There will likely be […] 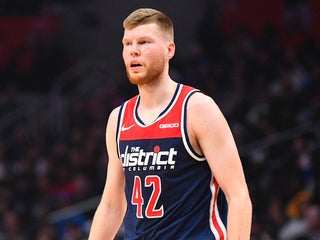 In late December, the Washington Wizards announced that star point guard John Wall would miss the remainder of the season after undergoing heel surgery to relieve the pain of bone spurs. The five-time NBA All-Star developed an infection at the site of his surgery and subsequently ruptured his Achilles tendon […] I’m a Brit who just went to his first NBA game, and it was more of a spectacle than I could have ever imagined

NBA shows are bonkers, says this Brit. Unlike Premier League soccer, the NBA manages to keep things interesting throughout dull periods like time-outs, and at half-time. Just watch out for flying t-shirts. Some of the most memorable moments in sports are born out of technical genius, senseless violence, or just […] The wild popularity of the NBA’s annual pilgrimage to London raises questions about the league’s potential for expansion. The NBA commissioner Adam Silver said in the past that because of logistics and flights, if the NBA expanded into Europe, it would have to create four new franchises. But speaking ahead […] The Washington Wizards intentionally fouled the Philadelphia 76ers’ Ben Simmons on Wednesday to make him shoot free throws while they chipped away at a lead. Simmons shot 24 free throws in the fourth quarter, an NBA record for most attempts in a single quarter. Intentional fouling has been on the […] Things got ugly between the Golden State... The Lakers beat the Wizards in overtime on... More NBA players are going after Lonzo Ball, and it’s starting to get under the Lakers’ skin

The Washington Wizards are the latest team to... If you didn't realise that Shaquille O'Neal is...