Susie Moore spent 10 years working in corporate sales, and before she changed career paths she was earning about $US500,000 a year. She attributes part of her success to building her confidence at work, and showing colleagues and clients that she was smart, capable, and ready for anything. Here, she’s […] 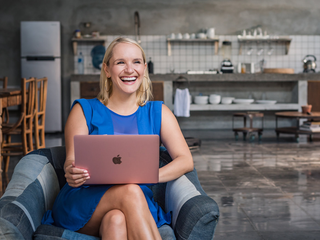 How to make someone like you in under 5 minutes, according to a relationship expert

Debra Roberts, LCSW, is an author, a relationship expert, and a communication specialist with over 20 years of experience working with challenging relationships. The need to be liked is a fundamentally human one. And people do business with people that they like. Employers should be teaching with their employees about […] The most powerful emotion in marketing may surprise you — and more brands need to tap into it, according to an expert in social influencer marketing

Oliver Yonchev is the US managing director of Social Chain, which works with brands like Amazon, Coca-Cola, DreamWorks, and Disney on social influencer marketing. In this opinion piece, he writes that marketers are obsessed with making people feel something, and rightly so – because the way we feel often dictates […] Dr. Greg Reid interviewed 100 of the world’s richest people – from entertainment pioneers to real estate tycoons – to find out how they built their wealth and held onto it. He and co-author Gary M. Krebs published the findings in a book, “Wealth Made Easy,” which contains proven, real-world […] When my spouse got the job of a lifetime, my world crashed. This is how I fought my way out of it and reinvented my career

Susan Solomont is the author of “Lost and Found In Spain: Tales of An Ambassador’s Wife.” When her husband was appointed US Ambassador to Spain under President Obama, she left her career in philanthropy, her friends and family, and a life she loved to join her husband for a three-and-a-half-year […] 3 worst salary negotiation mistakes people make, plus how to fix them right in the moment

Making a big “no-no” during a salary negotiation may result in thousands of dollars being left on the table. Your best way to tackle this delicate conversation: Stay calm, take plenty of deep breaths, and think before you speak. Focus on the facts, and then aim high. Visit BusinessInsider.com for […] Being CEO is an incredibly lonely job, but here are the 3 things that have saved me again and again

Josh Leslie has been the CEO of Cumulus Networks for two-and-a-half years. He says that it’s a lonely job – and that when you’re CEO, anything that happens in the company could be attributed to you, whether you like or not. His best advice? Listen to your gut – always. […]

A personality scientist says that if you’re a woman and you lean in, you’ll actually become a dysfunctional leader

Tomas Chamorro-Premuzic is an international authority in psychological profiling, talent management, leadership development, and people analytics. He says that the real problem with the “lean in” message is that we’re telling women to mimic dysfunctional traits. We’re often fooled by people – usually men – who are unaware of their […] I’m taking Yale’s class on happiness — and halfway through, these 4 tricks are already working

Yale’s most popular class ever, “The Science of Well-Being,” was designed by professor Laurie Santos. She collected all the psychological science related to happiness and came up with a step-by-step process for boosting your own. After five weeks in the class, the writer Justin Maiman says that the principles – […] It’s easy to link Elon Musk’s rapid success, ability to solve unsolvable problems, and genius-level creativity to his incredible work ethic. But during a one-on-one interview with TED curator Chris Anderson, Musk attributed to his genius-level creativity and success to a method of reasoning called first principles. First-principles thinking works […]