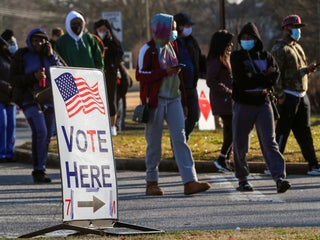 President Donald Trump on Tuesday appeared not to understand how grocery shopping, or any kind of retail shopping, works. During a rally in Tampa, Florida, Trump said that if “you want to buy anything, you need ID and you need your picture,” but this isn’t true for buying standard groceries. […] Widespread voting problems are being reported in a critical swing state

Widespread issues have been reported... A North Carolina county precinct GOP chair resigned on Thursday after an offensive interview that aired on “The Daily Show” Wednesday, in which he said ” lazy black people” want “the government to give them everything.” “Yes, he has resigned,” said Nathan West, a spokesman for the Buncombe County Republican […] The Justice Department Is Suing Texas Over Its Voter ID Law

The Justice Department said Thursday that it will file a new lawsuit against Texas to try to block the state’s voter ID law. “Today’s action marks another step forward in the Justice Department’s continuing effort to protect the voting rights of all eligible Americans,” Attorney General Eric Holder said in […] He says it no longer "made sense." [credit provider=”Wikipedia” url=”http://en.wikipedia.org/wiki/Charlie_Crist”] Former Florida GOP leaders admit the party intentionally created the state’s new voting law to keep Democratic voters away from the polls, according to a blockbuster report in The Palm Beach Post.Former Gov. Charlie Crist and former Republican Party of Florida Chairman Jim Greer, both of whom […] [credit provider=”Flickr/Phiala” url=”http://www.flickr.com/photos/[email protected]/8161403822/”] Voting and civil rights activists said Tuesday that Pennsylvania’s new voter ID law was causing mass confusion across the state as people tried to go to the polls.Because of a judge’s ruling in October, the law attempted to walk a line by allowing poll workers to ask […] [preserve] [/preserve] [credit provider=”Flickr/Phillip Pessar” url=”http://www.flickr.com/photos/southbeachcars/8150539704/”] Get ready. Here are all the things that could go wrong (or already have) as Americans head to the polls.1. Confusion over voter-ID laws spurred by ongoing ads, litigation and misinformation A former strategist for Sen. John McCain’s failed 2008 presidential run had some harsh words for anyone claiming voter fraud is alive and well in the United States. On the day a judge halted a controversial provision of Pennsylvania’s newly implemented voter ID law, Jon Stewart mocked the law and others for trying to solve what is, “by all accounts, is nonexistent, but nevertheless a major concern for all Americans.” [credit provider=”AP”] A Pennsylvania judge on Tuesday blocked the most controversial provision of the state’s voter ID law, which will undoubtedly influence voter turnout in the 2012 election. Exactly five weeks before the election, Judge Robert Simpson halted — for this election only — a provision that would have required all voters […] Your Questions About Early Voting Answered

[credit provider=”AP Images” url=”http://www.apimages.com/secured_user/Download.aspx?st=dl&id=8574f8ac02e5da11af9f0014c2589dfb&isgb=false”] With just 41 days before the general elections, many voters-to-be are quickly nearing the voter registration deadline in their respective states.In 2008, there was a total of more than 130 million people who voted in the presidential election, the highest turnout in US history. [credit provider=”Youtube/Sarah Silverman” url=”http://www.youtube.com/watch?feature=player_embedded&v=ypRW5qoraTw”] Appearing in a short film published to YouTube on Thursday, comedian Sarah Silverman attempts to explain why 12 states have passed laws that require voters present photo identification before casting a ballot.In short, she said that “lawmakers are trying to [screw] you” — although she used […] Could College Freshmen Swing The Election?

[credit provider=”Secretlondon via Wikimedia Commons” url=”http://commons.wikimedia.org/wiki/File:Ecount-scanner2.jpg”] The deceased. Non-citizen residents. People being double-counted. All have been cited by groups focusing on voter fraud as proof of the flaws in the voter registration system.But one demographic that has been largely overlooked is college students, a mostly liberal, migrating demographic that could help […]