The US Navy Blue Angels conducted a flyover of the ships of the Harry S. Truman Carrier Strike Group in the Atlantic on Wednesday. Videos posted by the US military offer views of the flyover from inside the cockpits of the Blue Angels F/A-18C/D Hornets. The aircraft carrier USS Harry […] 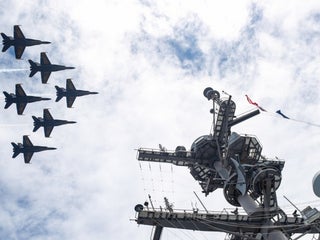 Responding to the coronavirus, the Navy has decided to leave the Harry S. Truman carrier strike group out at sea for at least three weeks rather than bring it home, the service said in a statement Monday. The carrier and its accompanying surface ships will remain in the Western Atlantic […] 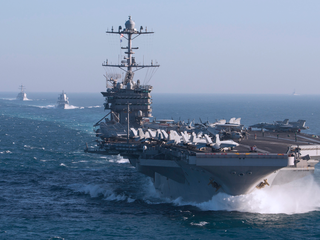 As tensions escalate with Iran, the American aircraft carrier USS Harry S. Truman has been stationed nearby in the Arabian Sea. Commanding the ship is Capt. Kavon Hakimzadeh, an Iranian-American who fled Iran during the 1979 Revolution. Visit Business Insider’s homepage for more stories. As tensions between the US and […] The Pentagon has tried twice this year to mothball one of its aircraft carriers, but it keeps getting shut down

During recent budget negotiations, the Pentagon again tried to retire the aircraft carrier USS Harry S. Truman decades ahead of schedule, Defence News reported on Monday. The White House’s Office of Management and Budget told the Pentagon that the Navy’s budget submission did not include refuelling the Truman or maintaining […] Before Vice President Mike Pence’s tour of Nimitz-class aircraft carrier USS Harry S. Truman on Tuesday, sailors were told to “clap like we’re at a strip club,” a Navy spokesperson confirmed to CNN. During his visit, Pence contradicted senior defence officials, announcing that the Truman will not be sent into […] Vice President Mike Pence, speaking aboard the USS Harry S. Truman Tuesday, said that the carrier won’t be retired decades early as the Pentagon had planned. “The USS Harry S. Truman is going to be giving ’em hell for many more years to come,” he said. Pence’s comments directly contradict […] The US Navy has emphasised dynamic force employment as a method to seem more unpredictable to foes. The Truman carrier strike group was the first to deployed under that new kind of employment. According to the Navy’s top officer in Europe, the method has already confused US adversaries. The National […] The US Navy is pushing north, closer to Russia in freezing conditions — and it’s planning on hanging around up there

NATO forces are working on a number of capabilities during exercise Trident Juncture, its largest war games in years. A main focus on sea and land has been dealing with harsh weather conditions. NATO ships have gathered above the Arctic Circle, and alliance leaders say they plan to spend more […] The USS Harry S. Truman carrier strike group sailed north of the Arctic Circle this week for exercises. The drills, part of NATO’s Trident Juncture exercise, mark the first time a US aircraft carrier has entered the Arctic Circle since 1991. NATO’s increasing attention to the far north stems in […]