Insider's top advertising and media stories for May 10. 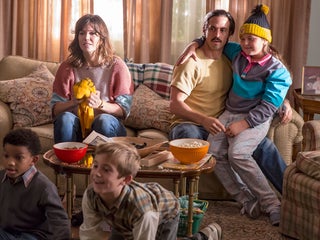 All the upcoming new TV shows that were just announced

The 2019 upfront presentations are an annual event where TV networks announce new shows. Lots of new comedies and dramas were announced at this year’s upfronts with stars like Kyle MacLachlan, Kim Cattrall, and Michael Sheen all set to star on upcoming shows. Some standouts include Southern family melodrama “Filthy […] 6 things that we just learned about the future of TV

The broadcast networks just wrapped one of the... MTV is revisiting its roots by bringing back... VIDEO: The trailer for is here. VIDEO: The Muppets are coming to ABC in a mockumentary-style television show. $10 billion will exchange hands this week, for no good reason. How Oprah Pitched Herself To Advertisers Last Night [THE BRIEF] Cartoon Network Is Ditching Upfront Ragers For A Roadshow

[credit provider=”Instagram/jaybi_” url=”http://statigr.am/viewer.php#/detail/204649679083269526_17322554″] Cartoon Network is taking its upfront presentation on the road: In lieu of one supersized Gotham gala, ad sales, marketing and programming execs for the Turner cabler will stop and chat with clients in more than 15 cities around the country to tout Cartoon’s fare.”This year, we […] Every year around this time, the broadcast networks hold events called “upfronts” where they gather all the media buyers from the agencies in one room and pitch them on next year’s season. Lots of times, the networks will bring in their on-air talent to keep things lively. Sitcom stars will […] UPFRONTS 2011: Turner President Steve Koonin Sweats It Out As The Network’s Upfront Has HUGE Technical Difficulties

We remember last year’s Turner upfront — it was their first enormous, network-scale affair, all because of one person: Conan O’Brien. The company spent the whole presentation exuberantly showing off their new toy. UPFRONTS 2011: Here’s The Best And Worst Of What’s Coming To ABC

ABC’s upfront at Lincoln centre was all business. UPFRONTS 2011: Jimmy Kimmel Makes Everybody Uncomfortable At The ABC Presentation, Including His Own Bosses

Jimmy Kimmel was hauled in for some comic relief at the ABC upfront this afternoon — and though potshots at other networks are par for the course, his barbs were particularly sharp. UPFRONTS 2011: Here’s The Best And Worst Of What’s Coming To Fox

Watching Fox’s upfront, you could tell the oft-winning network just doesn’t have to try too hard. UPFRONTS 2011: Here’s The Best And Worst Of What’s Coming To NBC

NBC’s upfronts today were part programming presentation, part homage to “The Voice” and the back-from-the-brink boost it’s given the network. UPFRONTS 2011: Donald Trump Starts The Week With A Bang

Leave it to Donald Trump to steal a show about shows. The biggest news coming out of NBC’s upfront was that Donald Trump is not running for President, but that was not the only information released on Monday morning.