The government is slashing university funding to the lowest levels in decades, as the sector faces $3.8 billion in losses

Australian universities anticipate they’ll be short $3.8 billion as international enrolments plummet. Despite the fallout, federal government funding is on track to fall to its lowest level in more than a decade. It leaves universities facing the prospect of stretching a 2009-sized budget to educate an extra 400,000 students. Visit […]

Bloomberg Philanthropies continued to fund a global-health initiative after one of its leaders, Alan Lopez, was accused of sexual harassment. 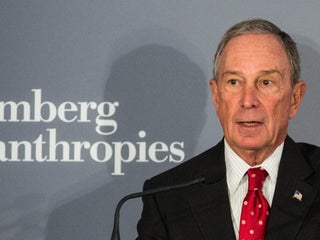 Nearly 1 in 3 Australians say they’re in financial distress, with cuts to JobSeeker and JobKeeper just weeks away

Nearly one in three Australians say they’re experiencing financial distress, according to the University of Melbourne. The figures “suggest that not everyone is seeing the benefits of the economic upturn,” said report author Professor Guay Lim. Nearly a quarter of respondents said they feel anxious or depressed most of the […]

The University of Melbourne is slashing 450 jobs in an effort to combat financial losses incurred due to the coronavirus pandemic. The university faces $1 billion in losses over the next three years. It comes as the pandemic has caused international student numbers in Australia to plummet. Visit Business Insider […]

Scientists in Melbourne have successfully grown the coronavirus, the first time the virus has been successfully recreated outside of China

Melbourne scientists have successfully grown the coronavirus from a patient sample. It’s the first time the virus has been grown in a cell culture outside of China. The lab-grown virus is set to be used as an antibody test on patients who don’t show symptoms of the virus. Visit Business […]

You’ve probably heard of mindfulness. These days, it’s everywhere, like many ideas and practices drawn from Buddhist texts that have become part of mainstream Western culture. But a review published today in the journal Perspectives on Psychological Science shows the hype is ahead of the evidence. Some reviews of studies […]

Universities of Melbourne, New South Wales, Sydney and Queensland have teamed up with the CSIRO to establish a new “follow on” fund of $20 million. The five parties form Uniseed, a venture capital organisation that had already started a $50 million “commercialisation” fund last year. The latest $20 million pot […]

Australian managers are a mediocre lot who haven’t mastered the basics such as performance monitoring, lack formal training and struggle to achieve targets, according to Australia’s largest survey of business leadership and the first major leadership study since 1991. When they do make decisions, few senior leaders seek advice, leaving […]

These Are The Australians Most Likely To Fake A Sickie