Dana White knew his UFC 249 event was a wild success when he got a cageside phone call from President Donald Trump. White and Trump are good friends, and the UFC boss said he tends to get a call from the president on Monday mornings to discuss recent fights. But […] 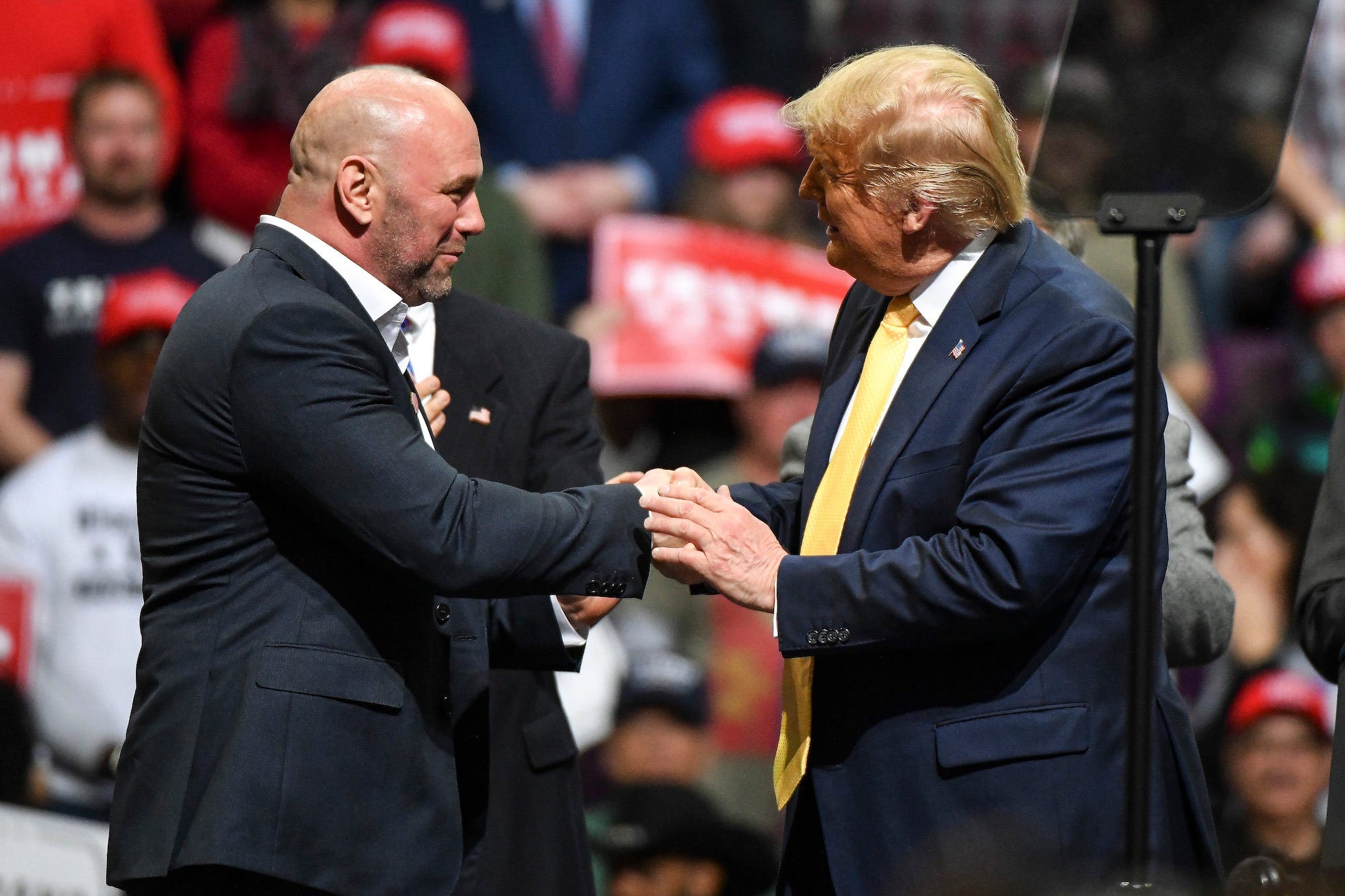 Khabib Nurmagomedov vs. Justin Gaethje could happen on “Fight Island.” That’s according to the UFC president Dana White who said this week that the UFC lightweight championship match will take place “this summer.” Gaethje shook up the MMA world by thrashing Tony Ferguson at UFC 249 on Saturday, winning the […] 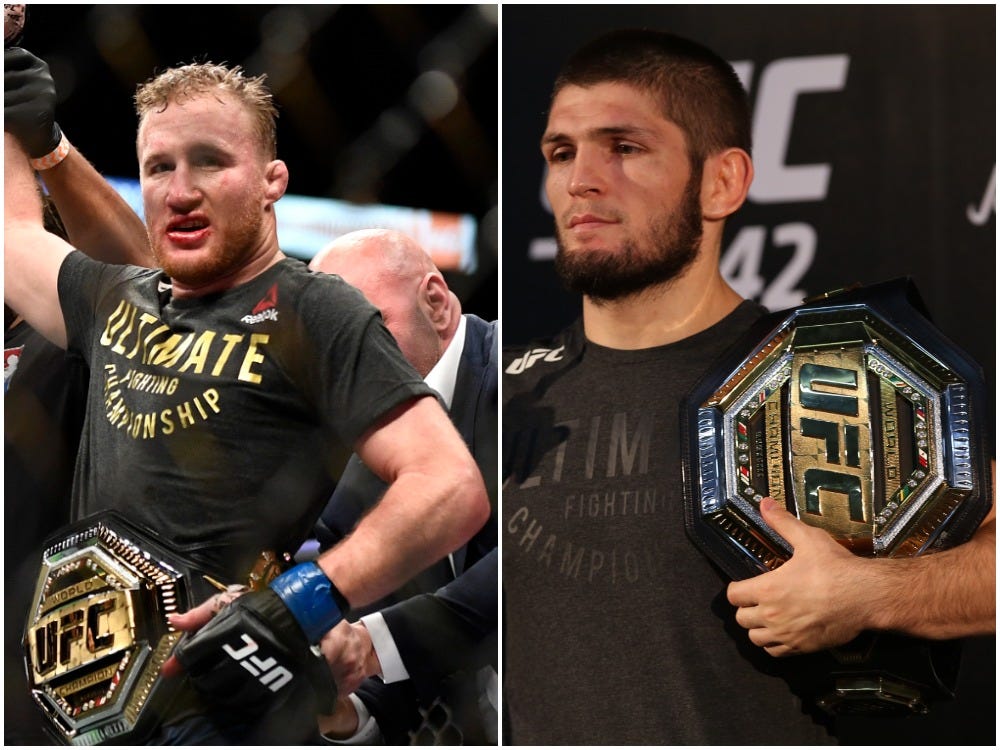 Behind-the-scenes at UFC 249, the world’s first major sports event in a COVID-19 era — which was held in a spookily empty 15,000 seat arena

The UFC became the first major sports organisation to restart operations in the United States on May 9 after a two-month, coronavirus-enforced hiatus. One fighter and two cornermen tested positive for COVID-19 during fight week so while that bout was cancelled, the rest of the show went ahead as planned. […] 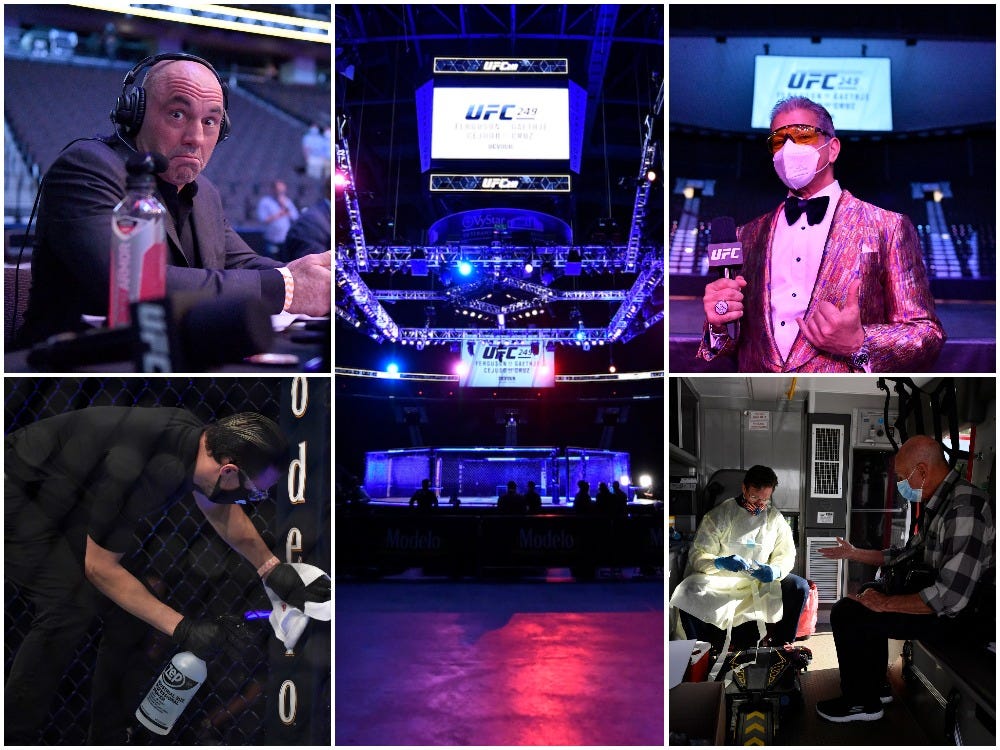 Justin Gaethje defeated Tony Ferguson at UFC 249 in Florida on Saturday. After his win, he said he would relish representing USA in a bout against the dominant Russian wrestler, Khabib Nurmagomedov. Shortly after, Nurmagomedov said on social media that it is a fight that will happen soon. Should the […]

Tony Ferguson was getting beat up bad against Justin Gaethje, then scooped imaginary sand at him in ‘superb display of weirdness’

Tony Ferguson tried to scoop imaginery sand at his UFC 249 opponent. It all went down when he was getting out-struck and out-fought in the UFC’s main-event at the VyStar Veterans Memorial Arena in Florida. The bizarre act did little, as he went on to lose heavily. Though the fight […] 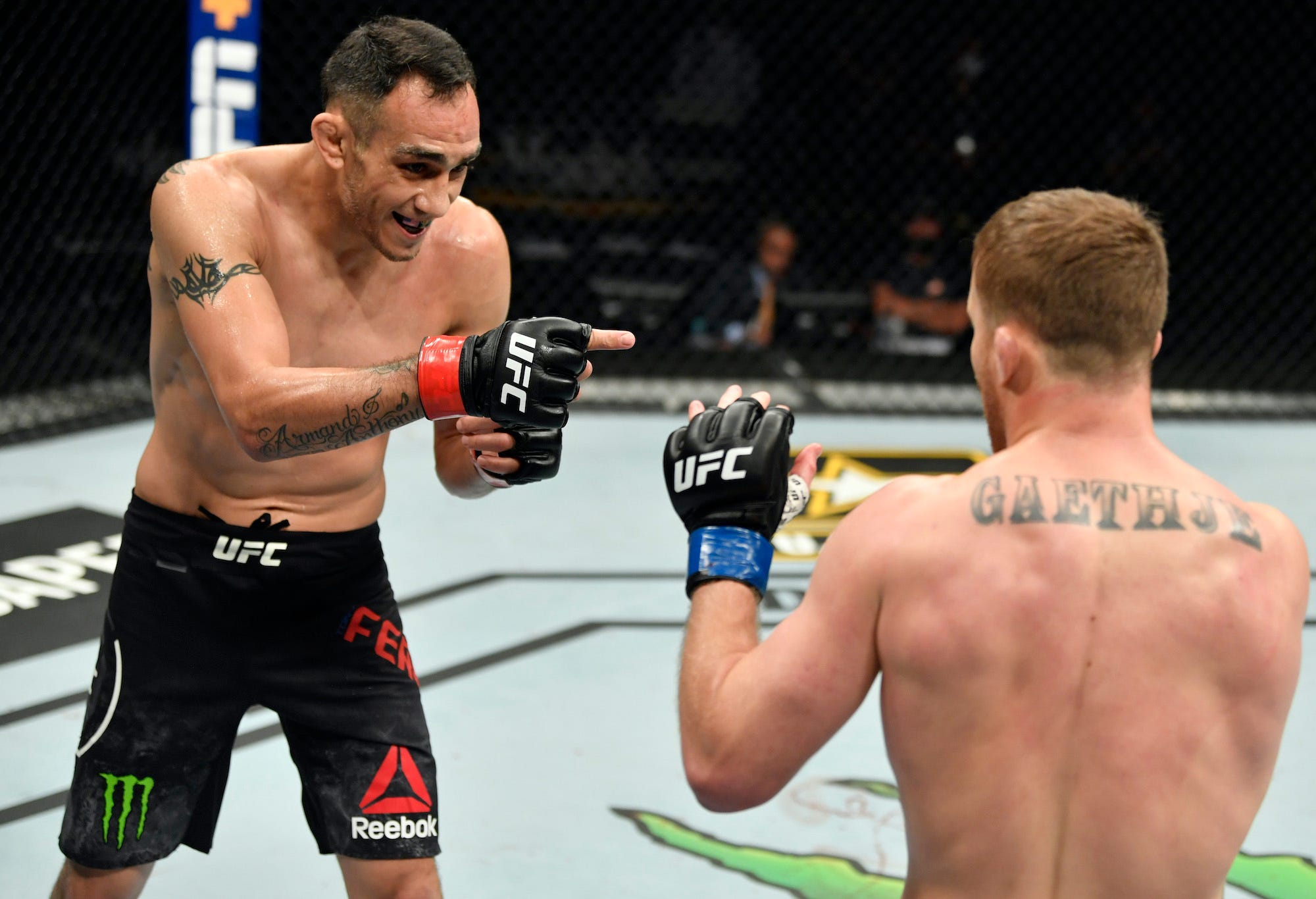 Photos of Niko Price’s eye injury are so gruesome you could mistake it for special effects makeup from a movie, and wish you’d never seen

Niko Price was beat up pretty bad in his third round doctor’s stoppage at UFC 249 in Jacksonville, Florida, on Saturday. Price was competing in a welterweight fight against Vicente Luque in the preliminary card of an event headlined by the interim UFC lightweight championship fight between Tony Ferguson and […] 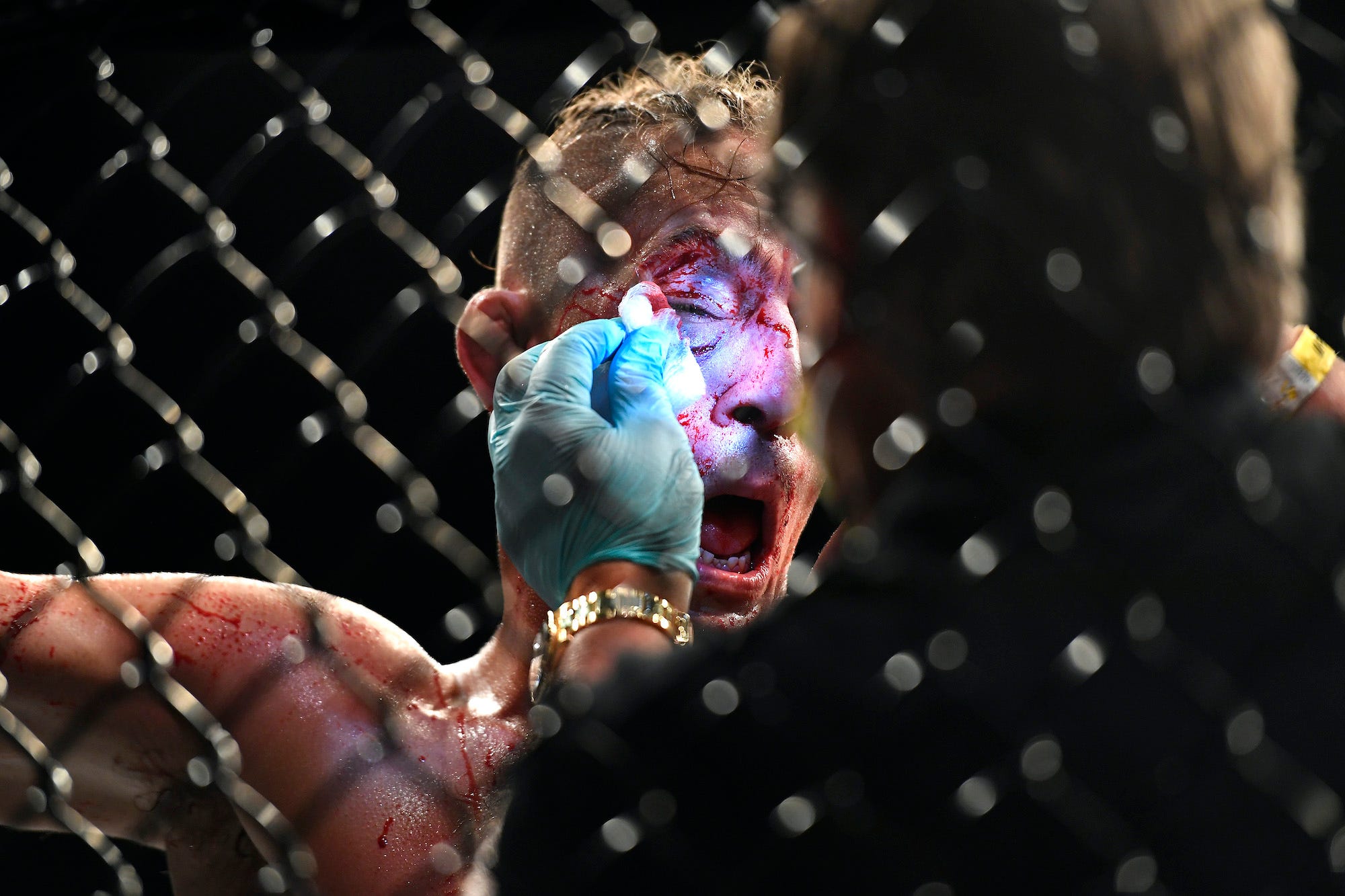 Calvin Kattar used his elbow tip in brutal fashion to end his featherweight fight with Jeremy Stephens. Kattar and Stephens were competing at the behind-closed-doors UFC 249 event in Florida on Saturday. After his second-round knockout win, Kattar said he hopes to climb into the top five of the UFC’s […] 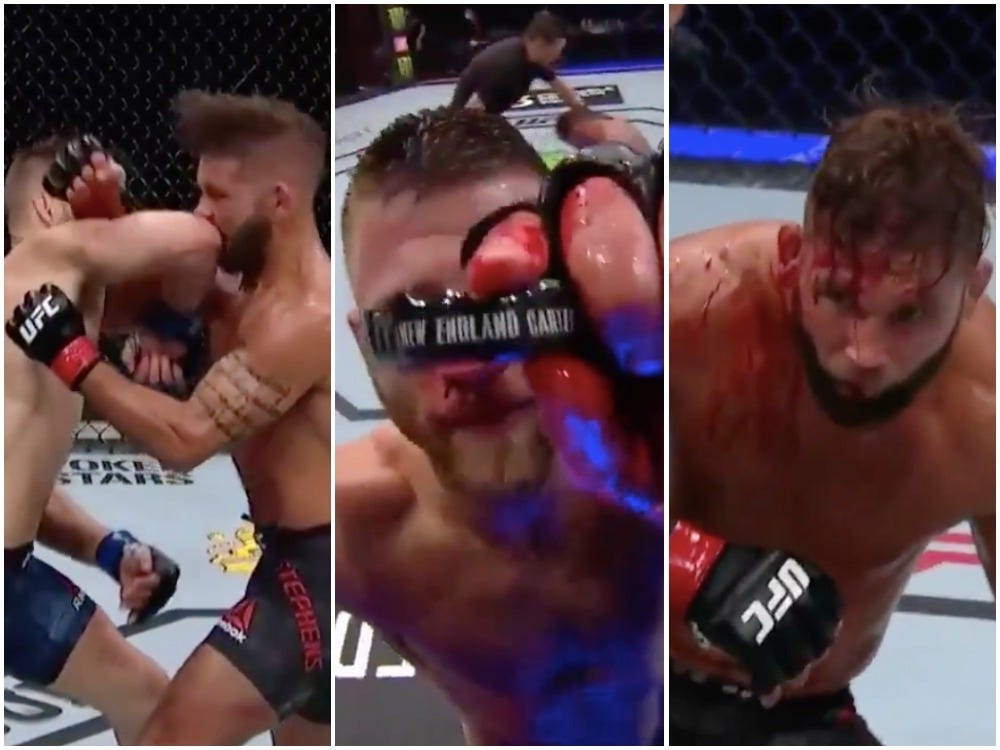 An American striker produced the MMA win of the year by torturing Tony Ferguson, stopping him in the 5th round at UFC 249

Justin Gaethje tormented Tony Ferguson at UFC 249 on Saturday. Fighting in front of a reduced UFC production crew and no fans, Gaethje put together the best MMA win of the year so far. Gaethje relied on in-and-out footwork, leg kicks, and striking so accurate and powerful that he brutalized […] 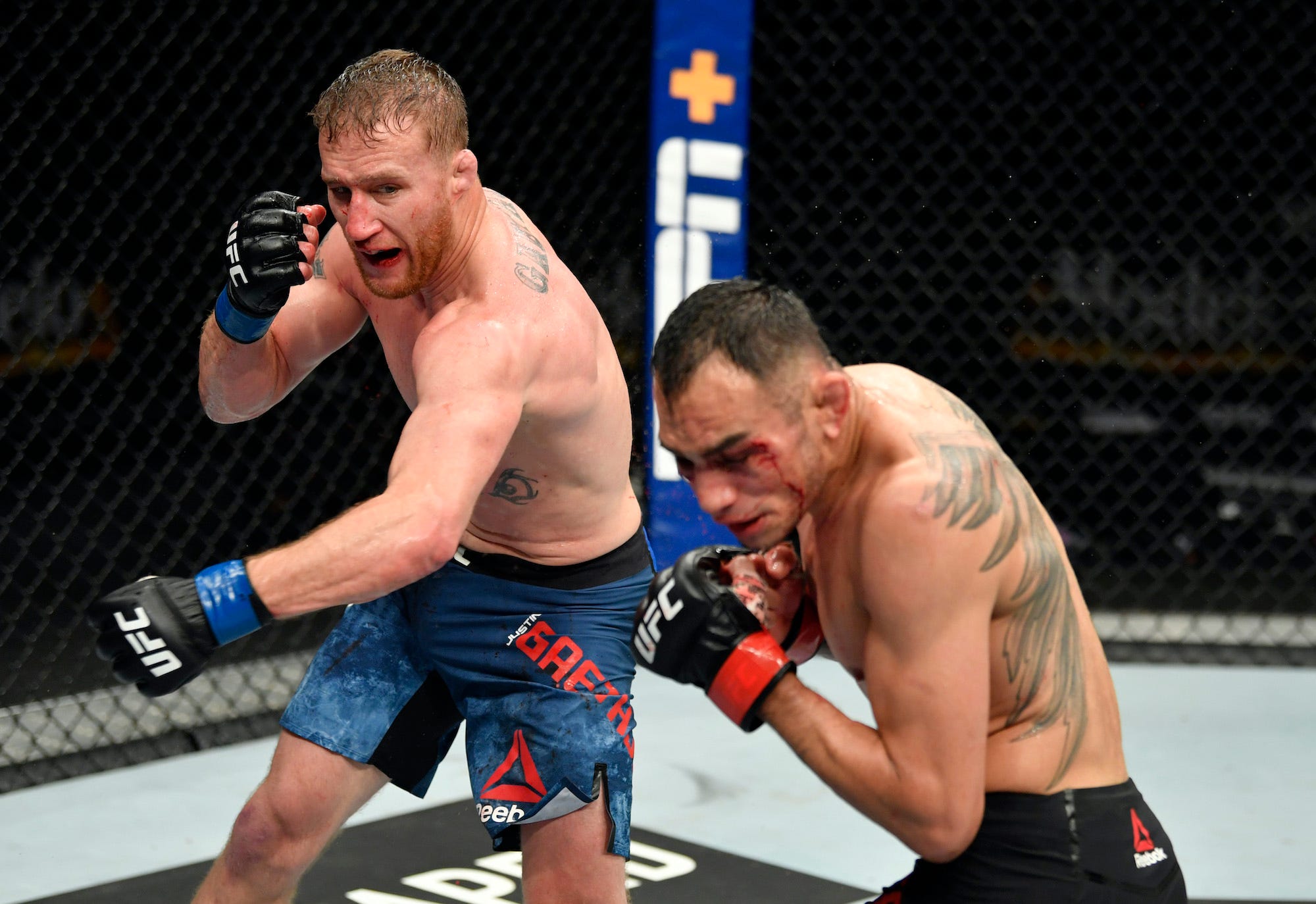 Francis Ngannou just knocked out Jairzinho Rozenstruik in 20 seconds. The fight took place at an empty venue in Florida, in the middle of the coronavirus pandemic. Ngannou’s performance was so fast, so furious, that a second shot at the UFC heavyweight championship beckons. Watch the quick-fire knockout win below. […] 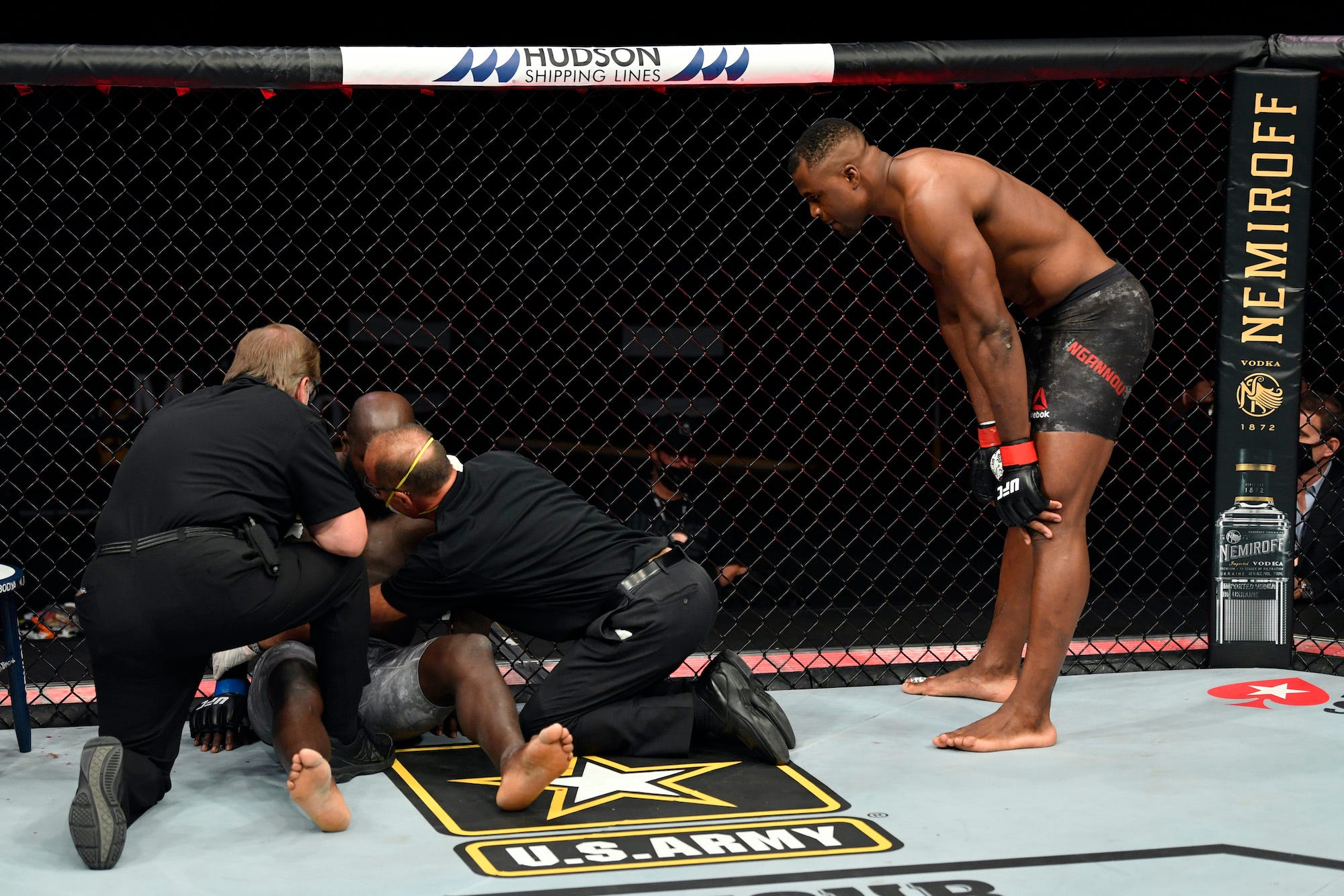 3 people test positive for COVID-19 ahead of UFC 249. One said he was desperate for money because his family might end up homeless.

Ronaldo ‘Jacare’ Souza, a UFC light heavyweight, and his two cornermen tested positive for COVID-19. Souza was supposed to fight Uriah Hall at UFC’s event Saturday, as the premier mixed martial arts firm restarts its combat calendar in Jacksonville after a two-month coronavirus-enforced hiatus. 23 other athletes have reportedly tested […] 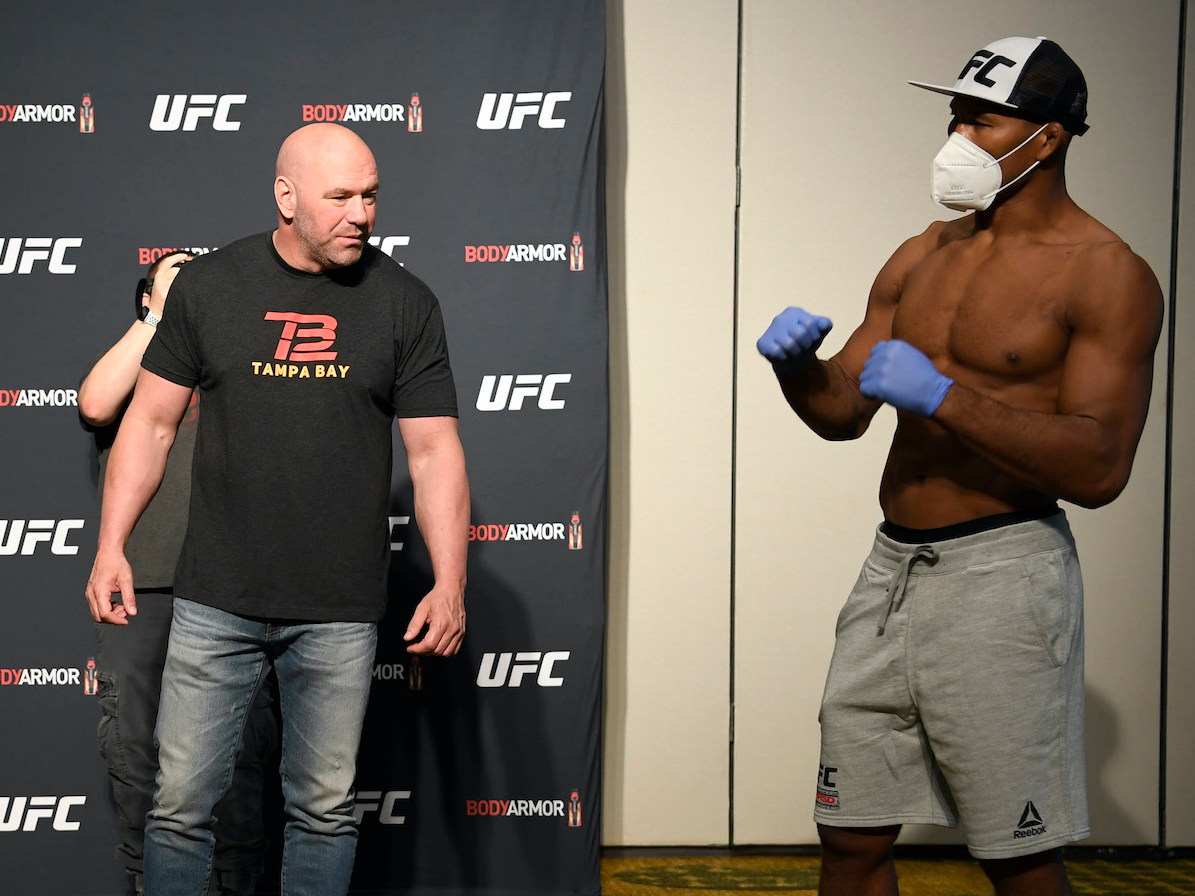 We counted 18 safety measures the UFC has in place for UFC 249, and people have already been filmed getting swabs for COVID-19

The UFC restarts its combat calendar on Saturday and has many safety measures in place, which Insider has detailed below. Tony Ferguson fights lightweight rival Justin Gaethje in the main event of a festival of fights beginning on May 9 in Florida. The UFC reportedly has 1,200 COVID-19 tests that […] 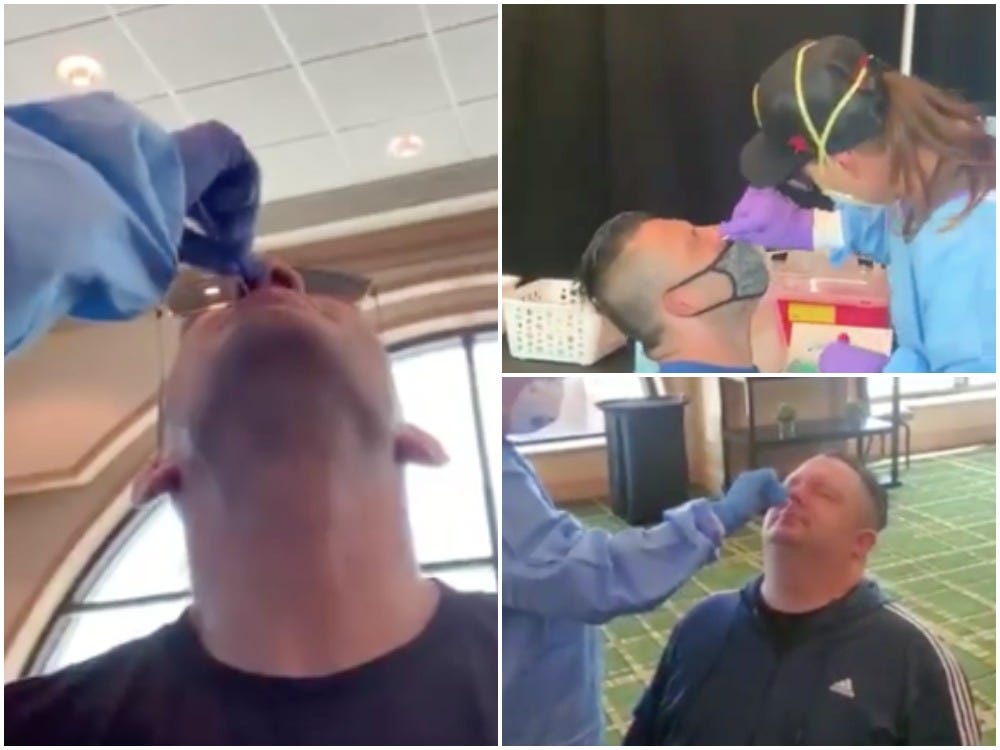 A Brazilian combat sports athlete said he felt out of breath and imprisoned by the coronavirus, a disease he said felt like it just didn’t stop. 37-year-old Sergio Moraes is wildly accomplished in Brazilian jiu jitsu and has fought 14 times in the UFC. However, he said COVID-19 was his […] 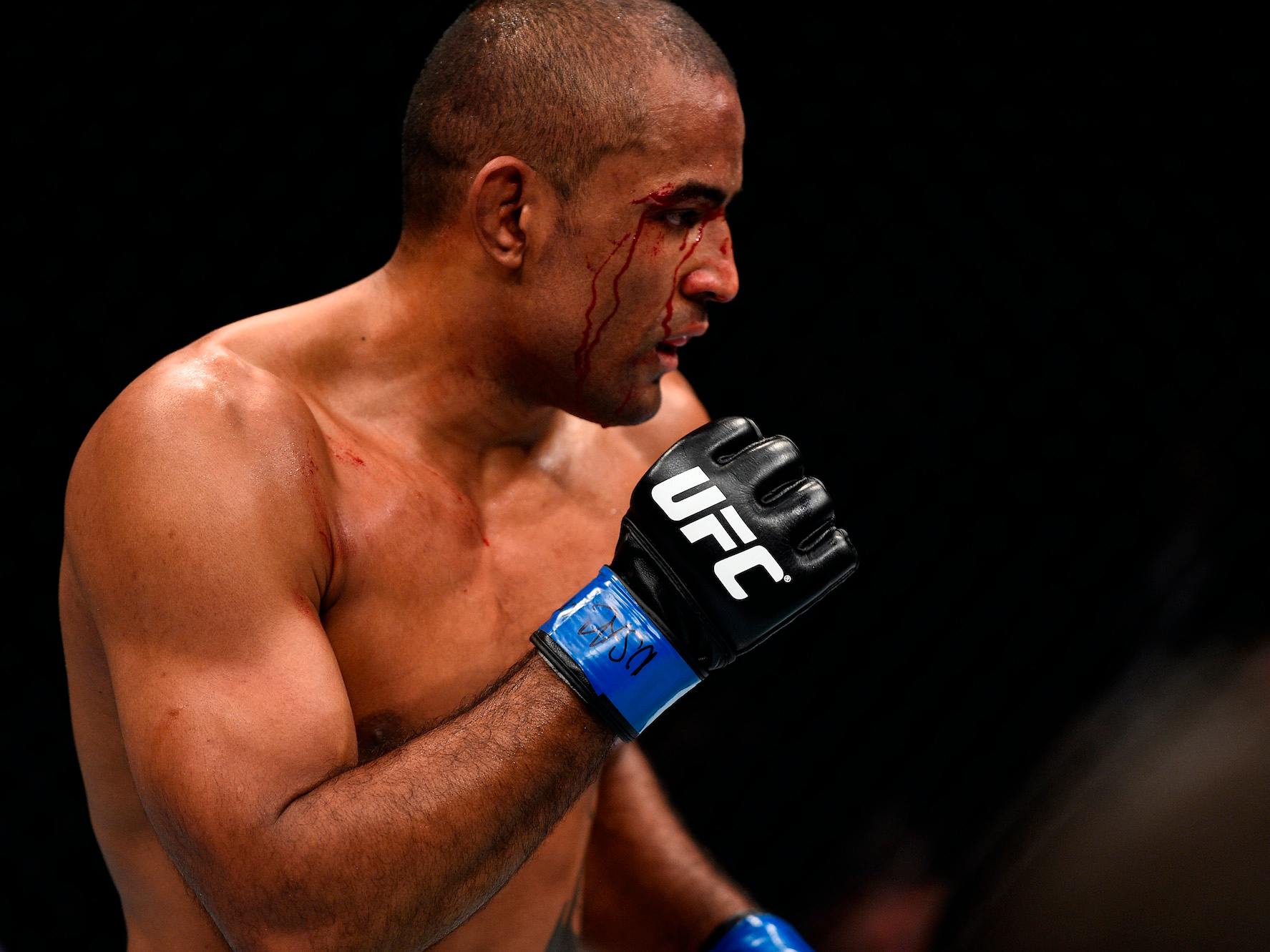 Tony Ferguson bloodies many of his opponents and cut a 2018 fighter up so bad, those watching nearby got splattered. “I’ve never had a blood shower like that,” the UFC commentator Jon Anik said, looking back at Ferguson’s brutal win over Anthony Pettis. Ferguson returns to the Octagon on Saturday, […] 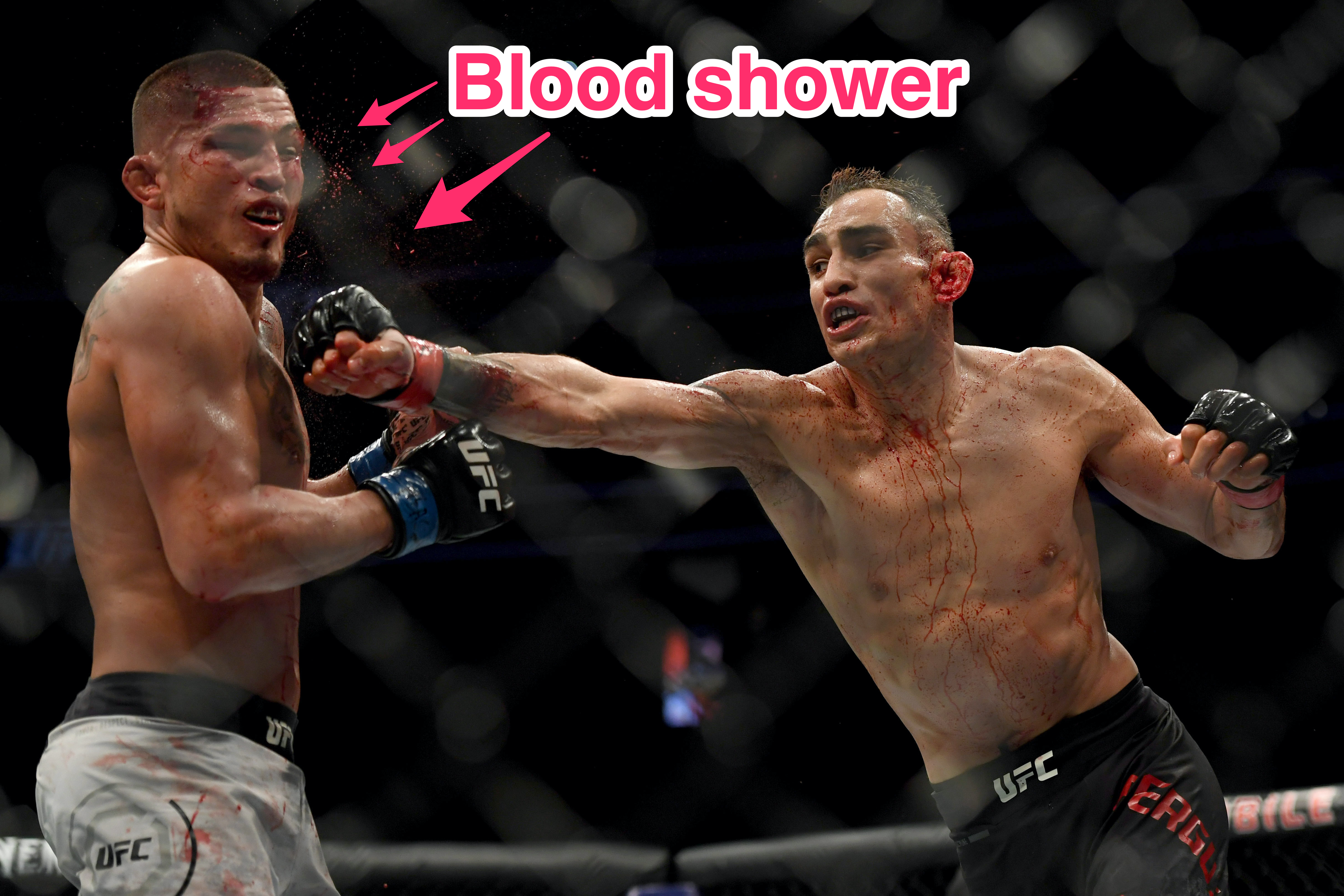 UFC 249 event was supposed to take place on April 18 but Disney ordered Dana White to shut it down after political pressure from California governor Gavin Newsom. It seemed that the world’s most prominent mixed martial arts firm, like the wider sporting industry, would be put on hiatus while […] 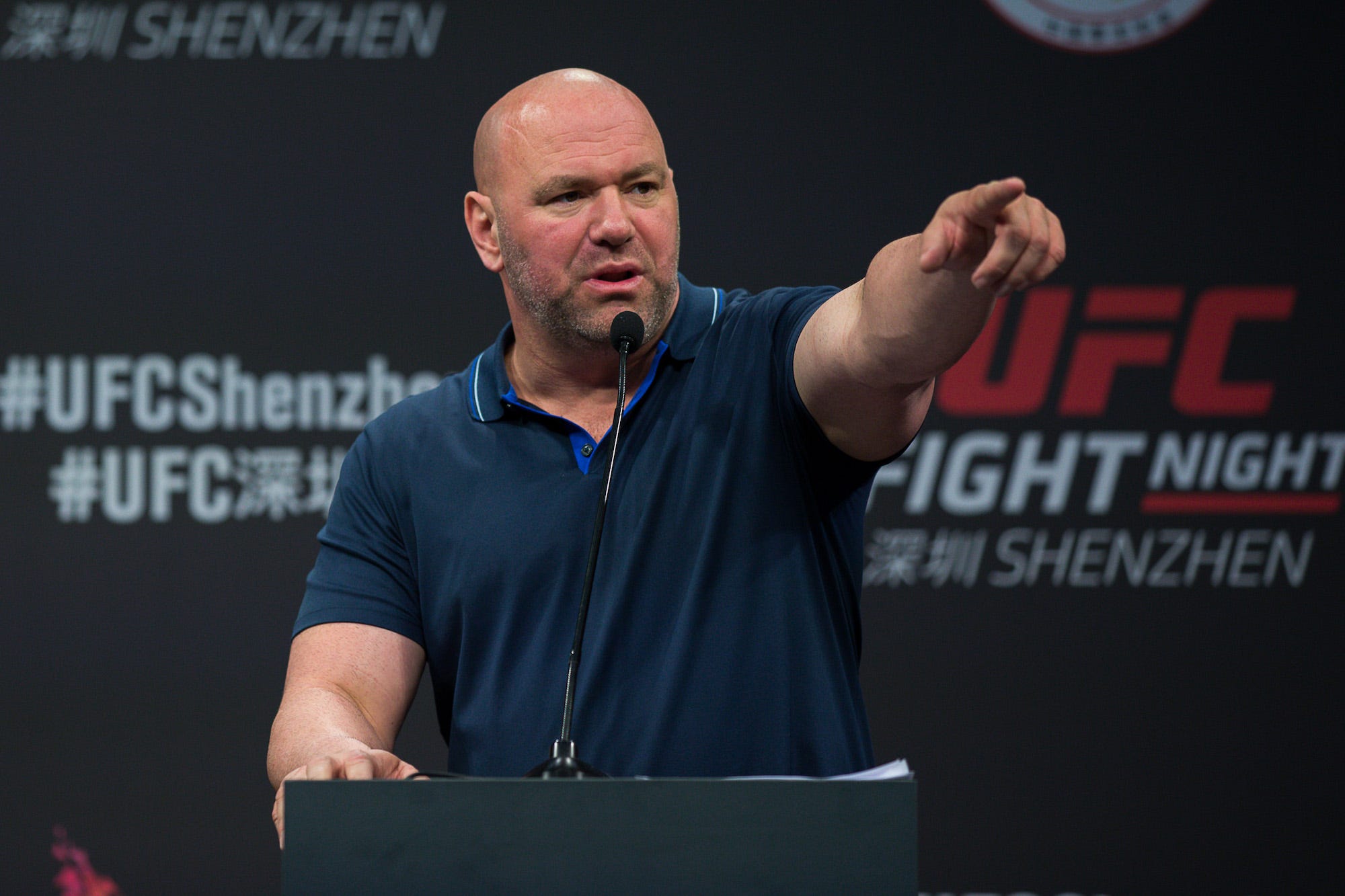 Dana White forced to cancel his mysterious, controversial, and behind-closed-doors UFC 249 event because of the coronavirus

Dana White has been forced to cancel UFC 249. The UFC president said he got a phone call from the “powers-that-be” at Disney and ESPN who ordered him to pull the plug on the April 18 event. Tony Ferguson and Justin Gaethje were scheduled to fight for the interim lightweight […] 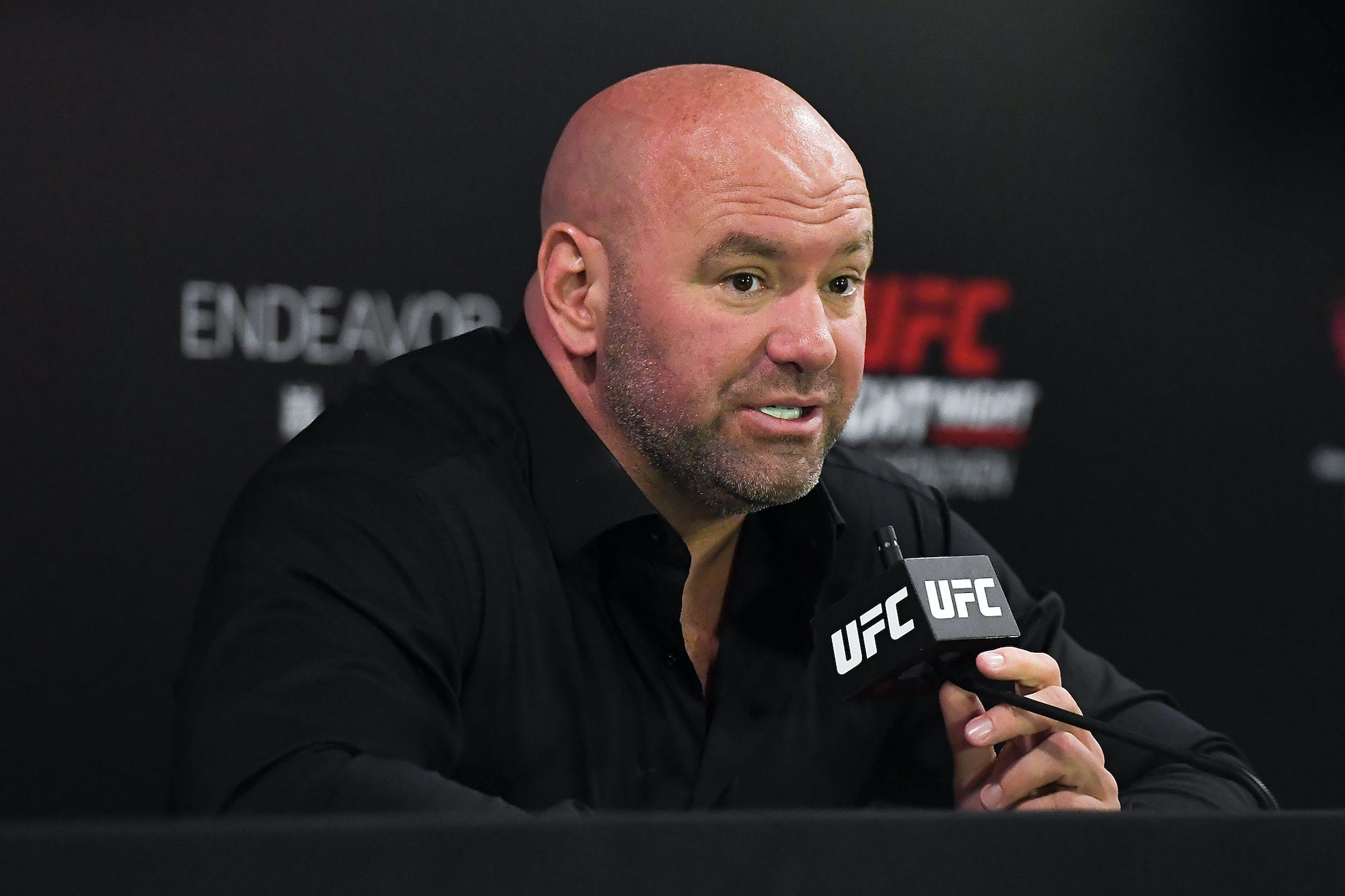 Rose Namajunas has withdrawn from the controversial UFC 249 event on April 18. UFC 249 has faced wild backlash for going ahead despite the ongoing coronavirus crisis in the United States. Namajunas was scheduled to contest a women’s strawweight world championship rematch against Jessica Andrade. But Namajunas won’t be competing […] 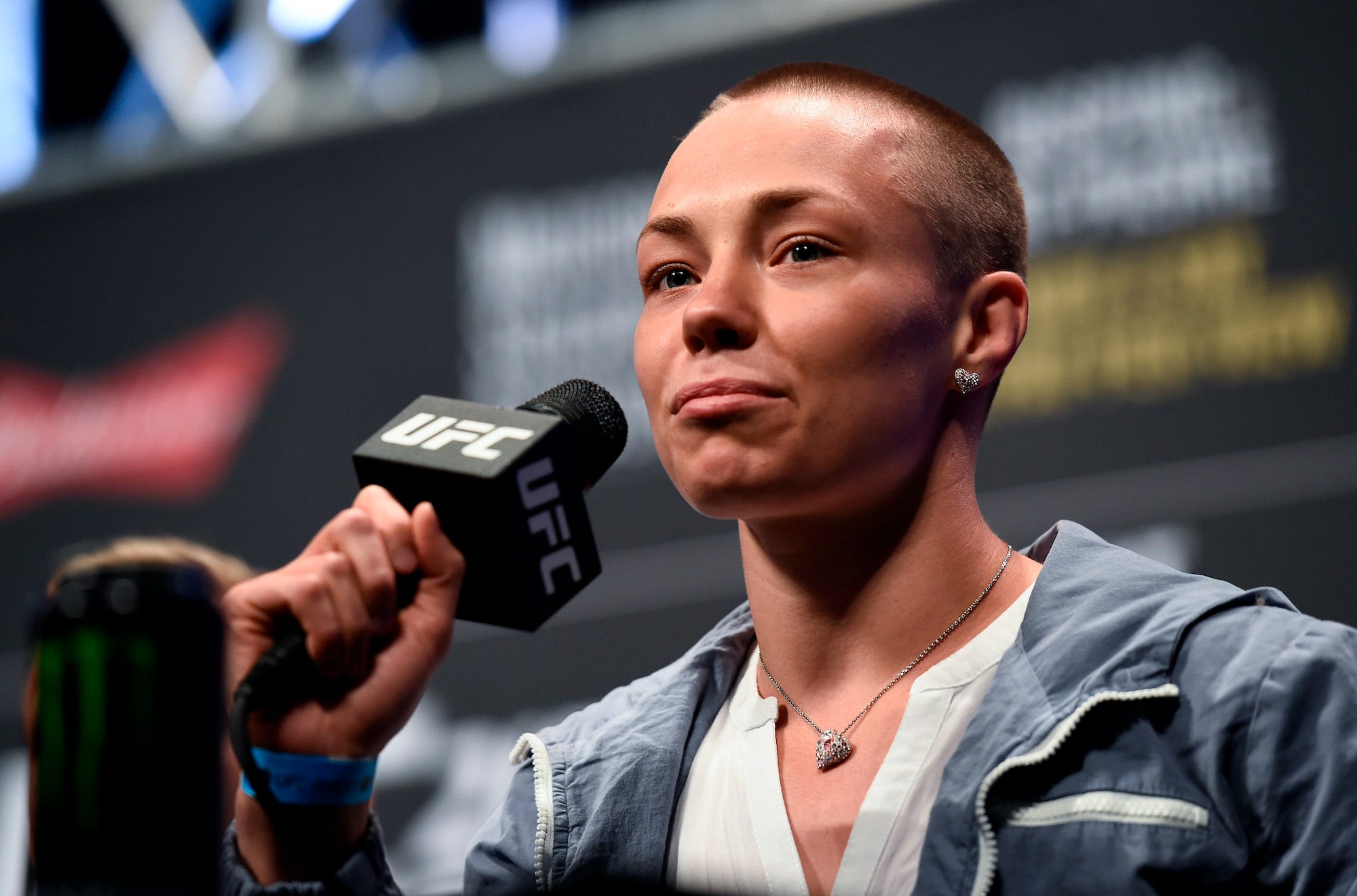 Conor McGregor took to Twitter Wednesday night to claim that the top-secret island hired by UFC to host international events during the coronavirus pandemic is … Ireland. “The island is the Emerald Isle of Ireland,” McGregor tweeted late on Wednesday evening. It is unclear if McGregor was joking, but it […] 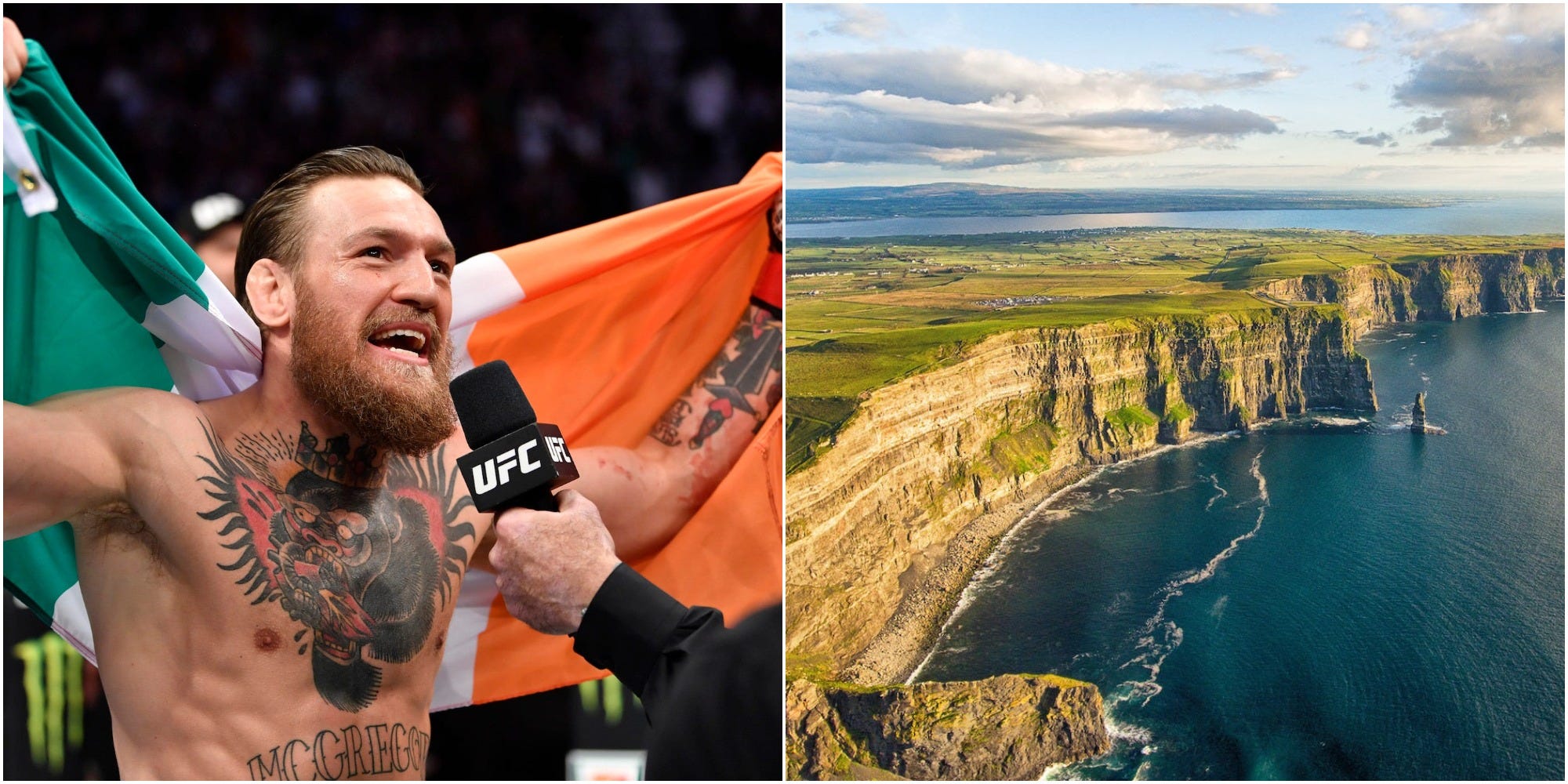 Max Kellerman, the cohost of the ESPN show “First Take,” supports the UFC’s decision to restart its fighting calendar in the thick of a pandemic. Dana White is planning for UFC 249 to take place at a mystery US location on April 18 – reportedly on tribal land – and […] 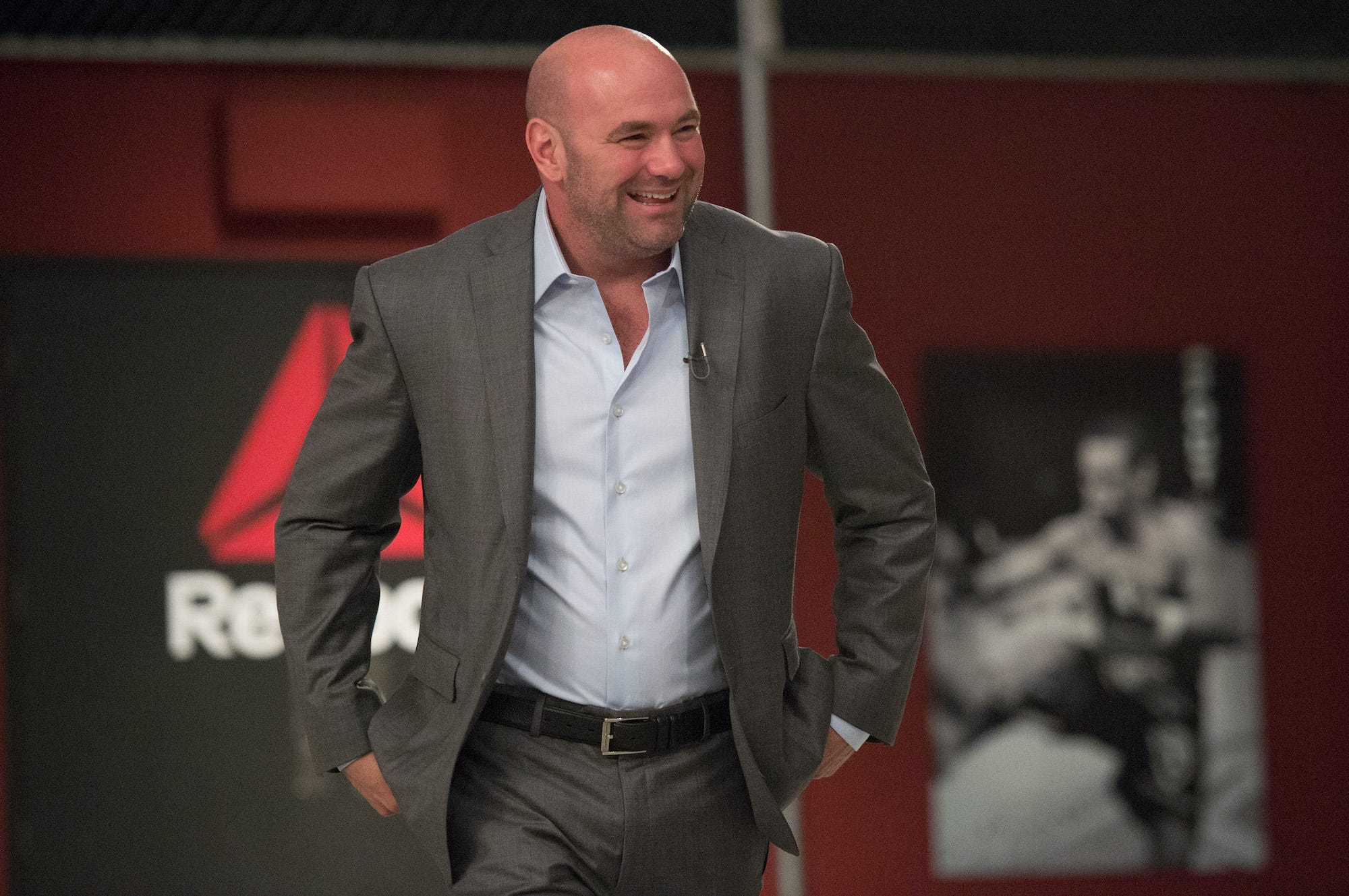 UFC 249 on April 18 is scheduled to be the first of many combat-sports events as the world’s premier MMA organisation tries to restart operations. The decision has been rebuked by a veteran boxing promoter, by ringside physicians, and by the MMA media because of the coronavirus pandemic. The UFC’s […] 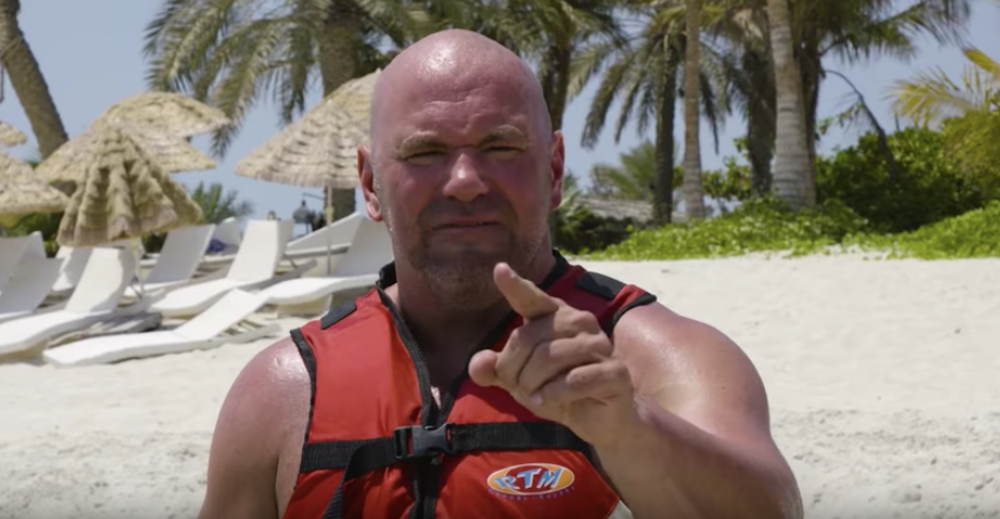 UFC 249 is going ahead – but with Justin Gaethje replacing Khabib Nurmagomedov as Tony Ferguson’s opponent. The UFC president Dana White confirmed the new fight on Twitter on Monday. The event will go ahead on April 18 at an, as yet, undisclosed location, however, the ESPN MMA reporter Ariel […] 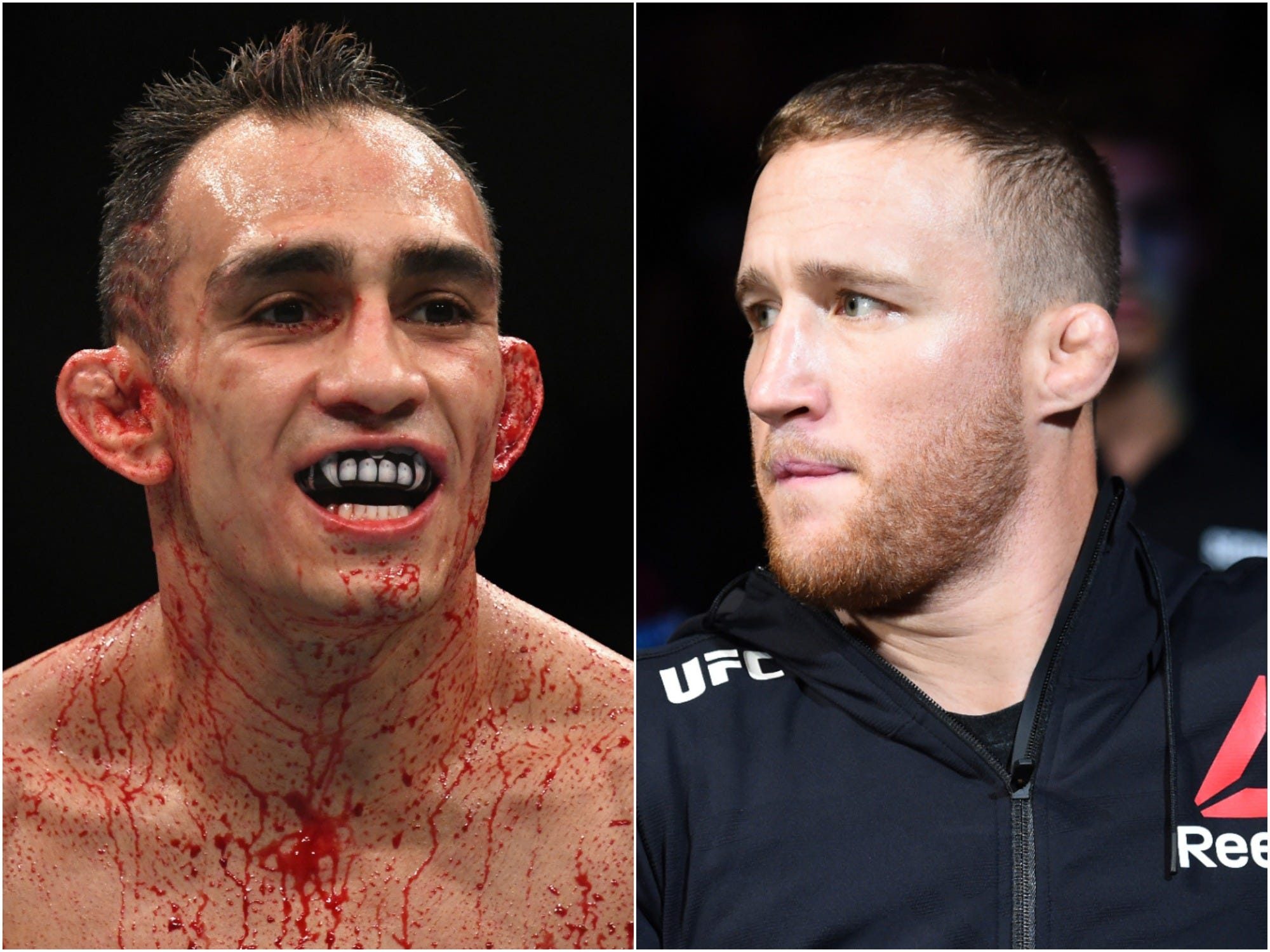