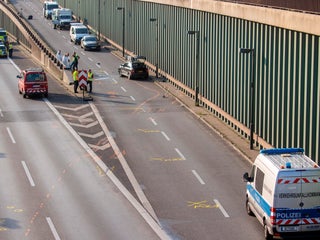 The London Bridge knife attacker from Friday’s incident, Usman Khan, previously claimed in a letter that he wanted to attend a deradicalization course while he was serving a prison sentence for terrorism related charges in 2012. In the letter obtained by ITV, Khan wrote that he wanted to live his […] French police have killed the Strasbourg shooting suspect, officials told media outlets. The suspect was identified on Wednesday as 29-year-old Chérif Chekatt, a Strasbourg native. Chekatt is believed to have opened fire on a local Christmas market, using a handgun and knife, and ultimately killing three people and injuring more […]

The Strasbourg shooter jumped in a taxi after his alleged attack and the bragged to the driver about it, French authorities said Wednesday. The suspected gunman has been identified as 29-year-old Chérif Chekatt, who was known to French police and evaded arrest in an unrelated investigation on the morning of […]

French police officer Arnaud Beltrame who exchanged himself for a hostage in a terror attack at a supermarket in Trèbes, southern France, has died in hospital. Interior Minister Gérard Collomb said he ‘died for his country’ and praised his ‘heroism and bravery.’ Brings the death toll to four. The police […] Appleby, the firm at the center of last year’s massive Paradise Papers leak, allegedly provided services to a bank accused of facilitating global terror and crime, according to a Guardian report. Appleby had represented the Federal Bank of the Middle East (FBME) since 2004, the report said. FBME was described […] US State Department: Americans are among the dozens killed during 12-hour standoff at a hotel in Kabul

Americans are among the dozens of people killed in last weekend’s deadly attack at the Intercontinental Hotel in Kabul. At least 30 people died, according to Reuters, but the final death toll was not immediately known. Multiple reports from survivors of the attack claim the shooters specifically targeted foreigners at […] US State Department: Americans are among the dozens killed during 12-hour standoff at a hotel in Kabul

Americans are among the dozens of people killed in last weekend’s deadly attack at the Intercontinental Hotel in Kabul. At least 30 people died, according to Reuters, but the final death toll was not immediately known. Multiple reports from survivors of the attack claim the shooters specifically targeted foreigners at […]

Akayed Ullah, the 27-year-old suspect from Monday’s pipe bomb explosion, was reportedly motivated by recent Israeli actions in Gaza. Israel has recently launched airstrikes into Gaza following several rocket launches into Israel from the Gaza Strip. Ullah is suspected to be behind the explosion which took place Monday morning after […] Good morning. 1. First, to markets, and it’s all about earnings in the US. Specifically, Tesla, which just posted a much bigger loss than expected, and said it was cutting production of Model S and Model X vehicles to rescue its Model 3 from “production hell”. Facebook was up next, […]

President Donald Trump tweeted about a rise in... Police have shot dead the main suspect in the Barcelona attack, who they believe killed 13 people by driving a van into crowds on Las Ramblas on Thursday. Officers killed Younes Abouyaaqoub, 22, around 4pm local time (CEST) on Monday afternoon in the Spanish town of Subirats, 32km west of […]

Melbourne MFB Commander Graeme O’Sullivan was metres from the site of today’s terror attack in Barcelona, just seven months after witnessing similar scenes in his home town back in Australia. O’Sullivan was a first responder to scene where six people were killed and at least 30 wounded in Melbourne’s CBD […]

Good morning. 1. We’re updating all morning on the terror attack in Barcelona, Spain, where a van slammed into a crowd on Las Ramblas. At least 13 people are dead and two people have been arrested, including the man who reportedly rented the van, Moroccan citizen Driss Oukabir. Three Australians […]

Spanish police have arrested 2 suspects in the Barcelona terror attack

Police in Spain have arrested two suspects in the Barcelona terror attack, but their identities are still unclear. One senior police official told the Associated Press that neither of the detained suspects was the driver of the van that plowed into a crowd of pedestrians on the tourist hotspot of […]

Police this morning conducted a counter terrorism operation in Melbourne’s northern suburbs. Premier Daniel Andrews confirmed the raids were connected to the Brighton siege which saw an apartment worker shot dead as well as the gunman Yacqub Khayre. A 32-year-old man was arrested in the raids after three search warrants […]

Good morning. 1. Two Australians have now been confirmed among the seven people who were killed in last weekend’s terror attacks in London. Kirsty Boden, a 28-year-old nurse from South Australia, was killed after running to help people who had been injured by the attackers. Another victim was this morning […]

‘Get out and run, run, run’: Virgin passengers jump from their plane after threat

Good morning. 1. Two of the London attackers have been officially identified. They were Khuram Shazad Butt and Rachid Redouane; a third remains unnamed. One of them may even have appeared in a Channel 4 documentary called “The Jihadis Next Door”, praying in front of an unfurled ISIS flag in […]

Good morning. 1. Police believe they know who the suspects are in the latest attack on London. Twelve people were arrested in a raid on one of the homes of the attackers in Barking Road. Three attackers were killed yesterday as police fired an “unprecedented” 50 bullets to end the […]