The US-China trade war created a supply crisis even before the "everything shortage." They're fighting over the semiconductor chips everyone wants. 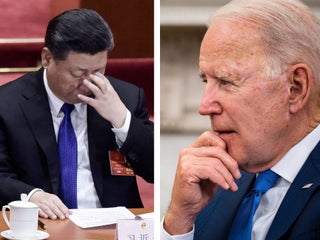 Huawei says it is likely to report a record annual revenue of $US122 billion for 2019. In a New Year’s Eve message to employees, Huawei’s rotating chairman Eric Xu reported the figure, which he said would represent an 18% increase on its annual revenue for 2018. The world’s largest manufacturer […] Huawei has managed to develop a smartphone with no American parts, according to a report in the Wall Street Journal. The discovery was made thanks to an analysis by UBS and Tokyo-based tech lab Fomalhaut Techno Solutions. Huawei has been plagued by on-off US sanctions in recent months, and it […] The rotating chairman of Chinese telecoms giant Huawei, Guo Ping, has said 5G will be “the new electricity” when combined with other nascent technologies such as artificial intelligence and big data. Guo added that 5G “represents a golden opportunity for the tech industry and particularly for [tech] developers,” claiming it […] Huawei snarled back at US attempts to freeze it out of $8.5 billion in mobile subsidies

The US appears to be stepping up its attempts to weaken Huawei’s presence in the country, judging by a blog post from FCC chairman Ajit Pai. In a post on the FCC’s website, Pai declared his intention to prevent Universal Service Fund dollars being used to make purchases from “any […] China wants to embrace blockchain, the technology that verifies cryptocurrency transactions. An official from China’s state bank urged the country’s commercial banks to “step up their application” of blockchain and “embrace digital finance.” The official’s remarks come after Chinese President Xi Jinping said China must make “greater effort” to develop […] Google has started kitting out an old Nokia factory in Vietnam in a bid to shift production of its Pixel phone away from China, two sources told Nikkei Asian Review. The move comes in the middle of the US-China trade war, although one source said Google won’t be leaving China […] Hello, Welcome back to Trending, the weekly newsletter highlighting the best of BI Prime’s tech coverage. This is Alexei Oreskovic, Business Insider’s Global Tech Editor and West Coast Bureau Chief, and I’m always eager for your feedback, thoughts and tips at [email protected] And remember to sign-up here to receive the […] Trump just took the China trade war to a new level, and it could be a ‘gut punch’ for Apple, analyst says

President Donald Trump’s newly announced 10% tariffs on $US300 billion worth of Chinese goods could weaken iPhone demand and negatively affect the company’s earnings. In a new note outlining the possible ramifications of the tariffs on Apple, analysts at Wedbush Securities called the move a “potential gut punch” for the […] Apple is requesting that the Trump administration exclude parts for its new Mac Pro computer from tariffs imposed on imports from China, Bloomberg reported. Public filings spotted by Bloomberg suggest Apple is asking for components such as the Mac Pro’s stainless steel frame, internal cables, and other parts to be […] Huawei abandons its mysterious ‘plan B,’ placing a huge bet on Trump letting them off the hook in trade deal

Huawei’sHongmeng OS, which was initially thought to be an alternative to Google’sAndroid, is not designed to be a replacement smartphone operating system, a company executive recently said, according to Xinhua. Hongmeng OS is being developed for industrial use, Chen reportedly said at a media roundtable in Brussels, adding that the […] Google, Amazon, Microsoft, Dell, and HP are all drawing up plans to move huge chunks of production out of China, Nikkei Asian Review reports. For Google, Amazon, and Microsoft the main areas of concern are gaming consoles, e-readers, and smart speakers. For Dell and HP, notebooks are where they’re looking […] At the 2019 G20 Summit in Osaka, Japan, President Donald Trump will meet with the heads of the world’s largest economies. Trump is impelled to come to an agreement with Chinese President Xi Jinping over trade, but the two must navigate their complicated relationship to do so. Communication experts and […] Foxconn’s founder is encouraging Apple to shift its iPhone production from China to Taiwan amidst rising tensions between the US and China, according to Bloomberg and The Associated Press. His comments follow a report from earlier this week that suggested Apple is urging its suppliers to look into moving between […] A US trade ban announced in May will block the Chinese tech giant Huawei from working with US companies, a move that will require the firm to rethink how it develops and sells its products. When the Chinese telecom firm ZTE was blacklisted last year, it nearly went out of […] Trade relations between the US and China have been deteriorating recently. To get a sense of how a broader trade war could affect various states’ economies, we took a look at Census Bureau data on the total value of import and export trade each state has with China. Visit Business […] Trump slams China’s tech scene, says it doesn’t have the capability of ‘the geniuses in Silicon Valley that walk around in undershirts’

Donald Trump conducted an interview with CNBC on Monday morning about the US-China tech cold war and the battle for 5G dominance. During the interview, Trump argued the US would beat out China because “they don’t have nearly the capability of our geniuses in Silicon Valley that walk around in […] Russia’s largest mobile network provider, MTS, has signed a deal with the Chinese telcom giant Huawei to build 5G internet in Russia. The move is creating a further divide in the tech cold war between the US and China, which has already seen the US bar American tech firms from […] China on Tuesday warned its citizens to avoid travelling to the United States. State-controlled media reported the move was in response to violence and shootings in the US. The warning comes amid heightened tensions between the two countries centered on the tech giant Huawei. THE TECH COLD WAR: Everything that’s […]