Senate Republicans introduced their coronavirus relief bill on Monday, known as the HEALS Act (Health, Economic Assistance, Liability Protection, and Schools Act). The proposal included another round of $US1,200 stimulus checks, and reduced unemployment benefits, and allocated $US105 billion towards education – two-thirds of the funding is tied to schools […] 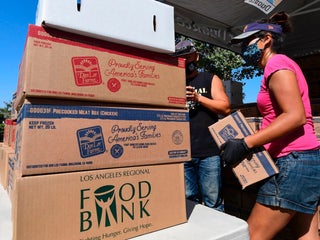 Sex toys, handbags and dogs: How to get more out of your tax return this year

There’s an $8.7 billion difference between what people owe in tax and what they actually pay, according to estimates, with the ATO getting better each year at deducing which claims are legitimate or not. Depending on your profession, you can claim all kinds of things from sex toys to handbags […]

11 million Americans could be affected by a big change in Trump’s tax plan, and a CPA says he’s getting frantic calls about it

The 2019 tax season is the first to observe President Donald Trump’s Tax Cuts and Jobs Act (TCJA). The tax law made sweeping changes to the US tax code, including limiting the annual deduction amount for state and local taxes (SALT) to $US10,000. The Treasury Inspector General for Tax Administration […] 5 tax breaks you can’t get anywhere but the US

Some tax deductions and tax credits for businesses and individuals are unique to the United States tax code. The Foreign Earned Income Exclusion, for example, allows expats to avoid paying US taxes on income earned in the country where they live and work. New under the Tax Cuts and Jobs […] The top 10 jobs that claim the most tax deductions

Tax experts at Etax.com.au have found that surgeons claim by far the most tax deductions in Australia, followed by real estate agents, and lawyers. The company analysed the latest Australian tax return data from the ATO, and found that surgeons, on average, claim more than double the next occupation on […]

The Australian Taxation Office (ATO) is cracking down on rising tax deduction claims for work-related clothing and laundry expenses. The ATO believes a lot of taxpayers are either making mistakes or deliberately over-claiming. “Some people think they can claim normal clothes because their boss told them to wear a certain […]

The IRS clarified on Wednesday who is allowed to prepay their property taxes this year before the new GOP tax law takes effect Monday. Only homeowners with property taxes that have already been assessed can take advantage of the unlimited state and local tax deduction. The new law caps that […] These 10 jobs claim the most tax deductions in Australia

The 10 jobs that claim the biggest tax deductions in Australia have been revealed by online service provider etax.com.au. The figures, which represent overall data from the Australian Taxation Office and not just those from etax.com.au customers, show that the average Australian claims $3,041 of deductions on their tax return. […]

As tax season approaches, the Australian Taxation Office has sent out a warning to taxpayers to not claim deductions for expenses that are commonly misconstrued as work-related. “Many taxpayers don’t have a good understanding of what deductions they can claim, and believe they can claim for items which they in […]

Labor wants to cap tax deductions for accountancy to $3000

The Labor Party will limit the amount an individual can claim as a tax deduction for accountancy to $3000 when in government. In his budget reply speech last night, Opposition leader Bill Shorten took aim at 48 Australians who earned more than $1 million in 2014-15, but paid no tax. […]

Watch out for the mate's rates rentals.